1. Find the two blue crystals (one is in the fire). 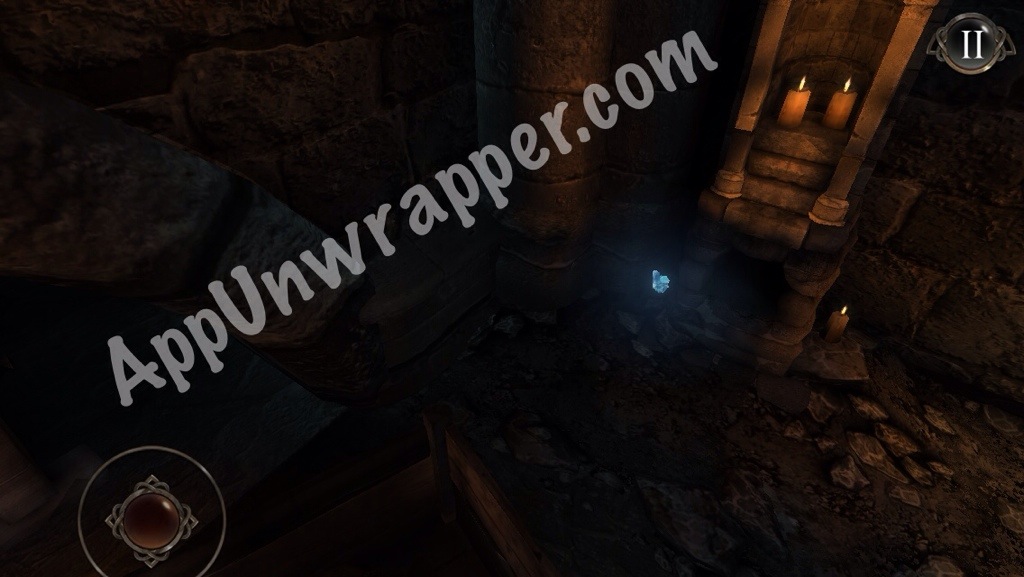 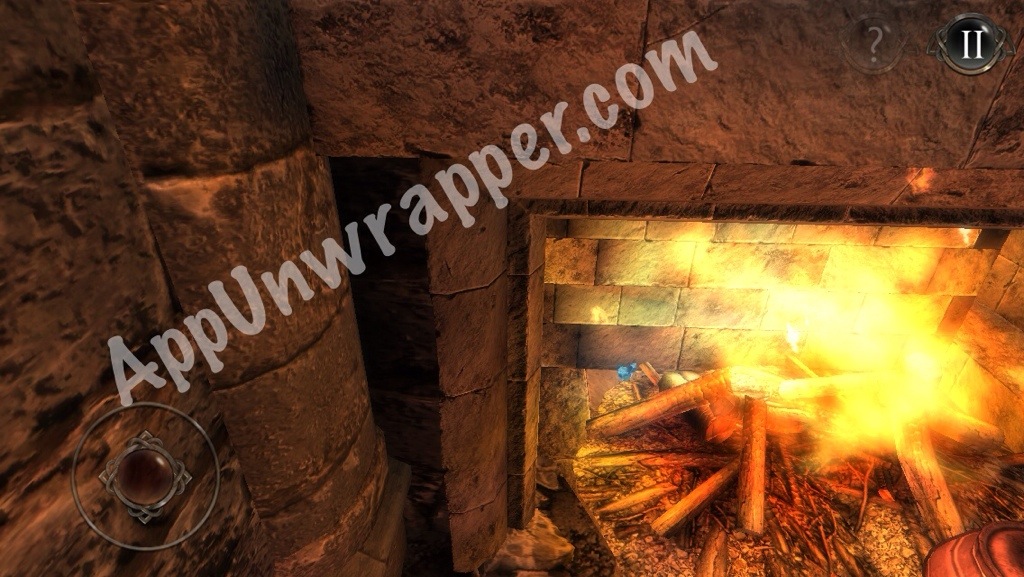 2. Look at the blue things near the door. It’s missing something. 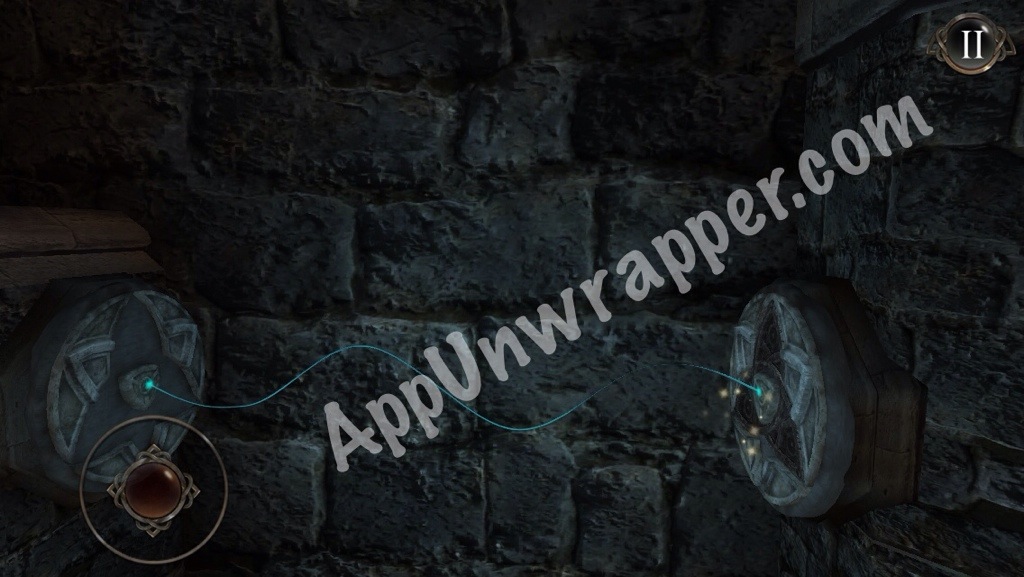 3. Look at the alchemy set on the table and read the recipe. 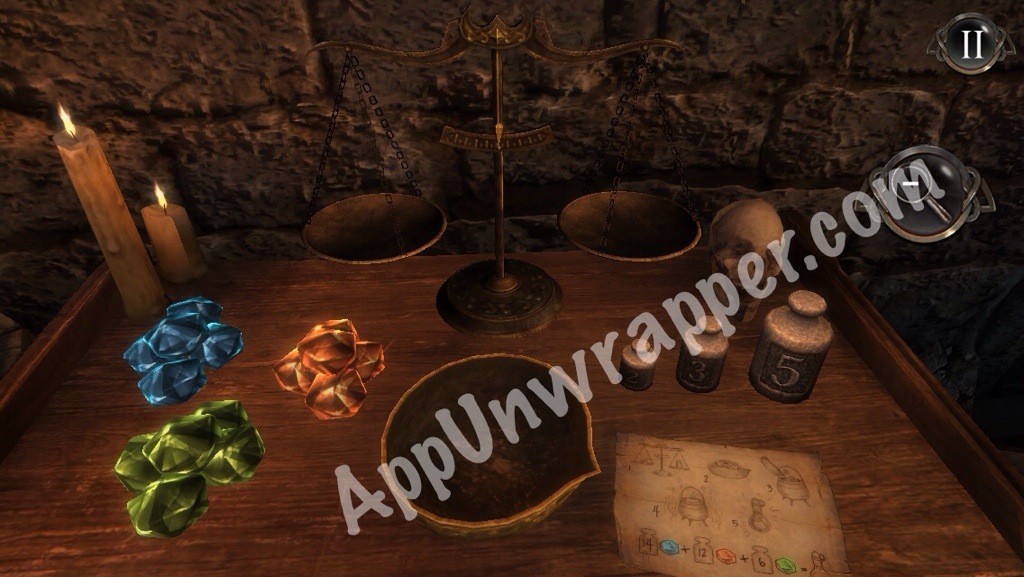 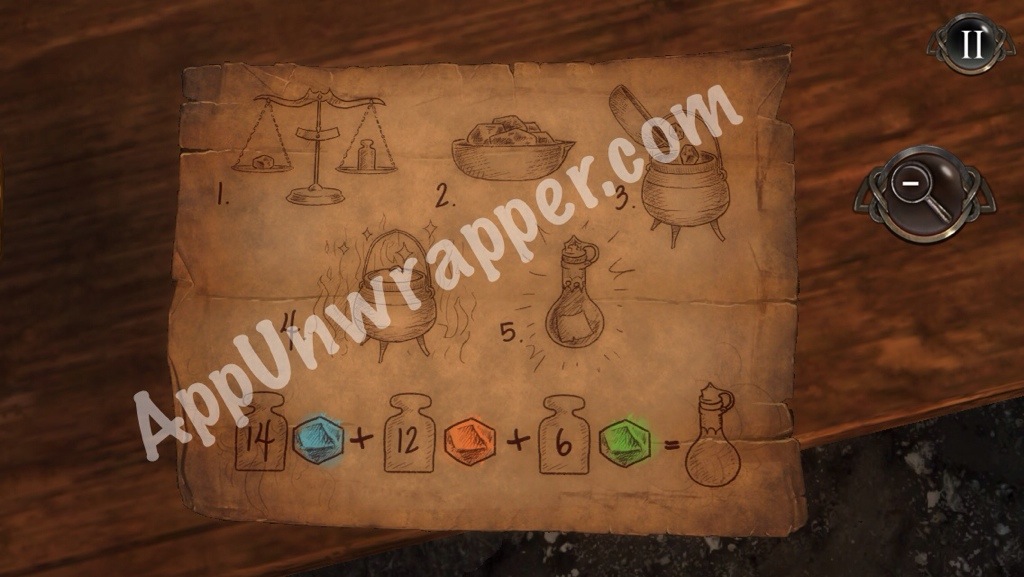 4. Look under the stack of firewood to find the mechanism handle. 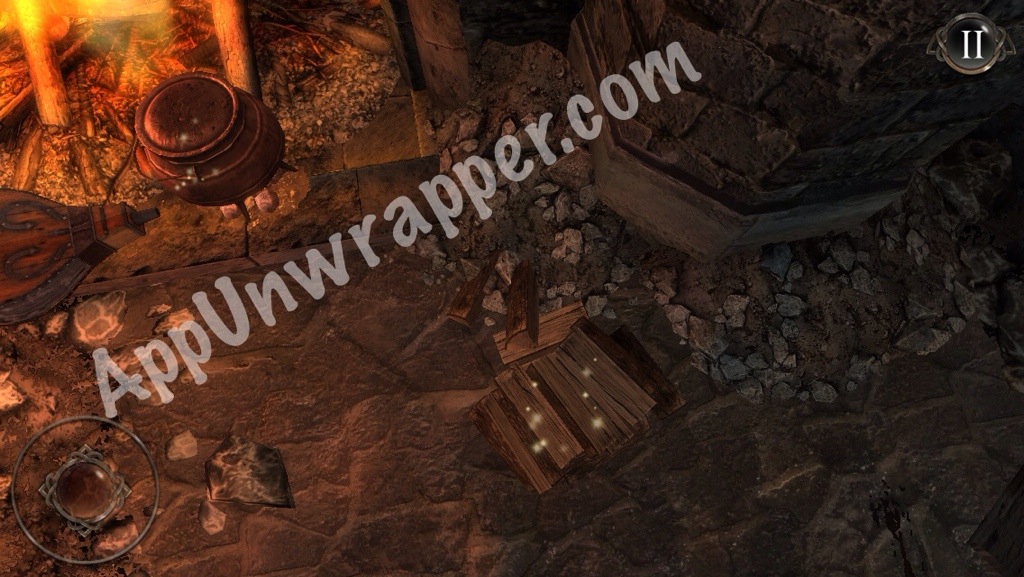 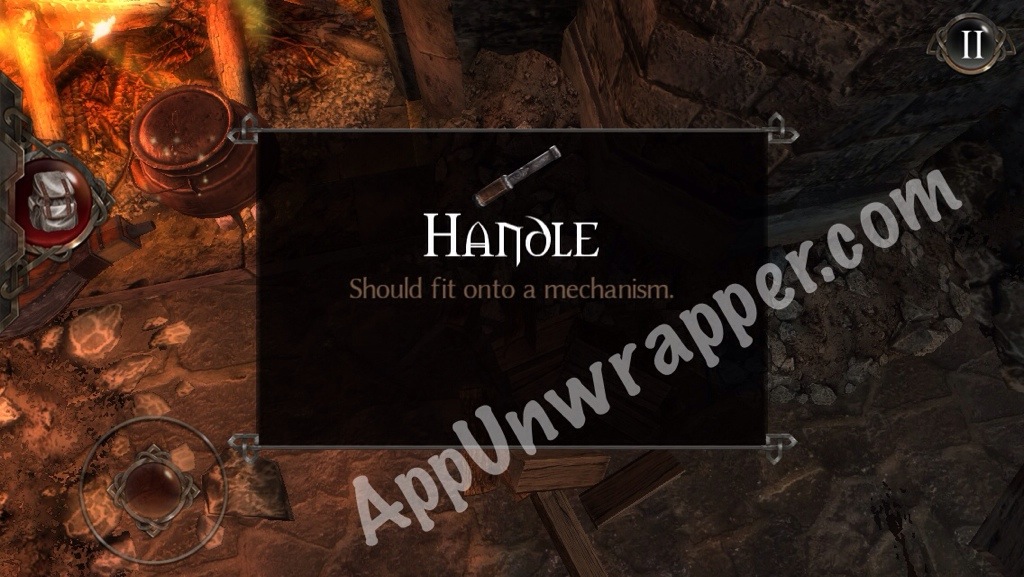 5. Attach the handle to the mechanism by the door. Now you need to move the piece across the blue line to the other end without it touching. Then the door will open. 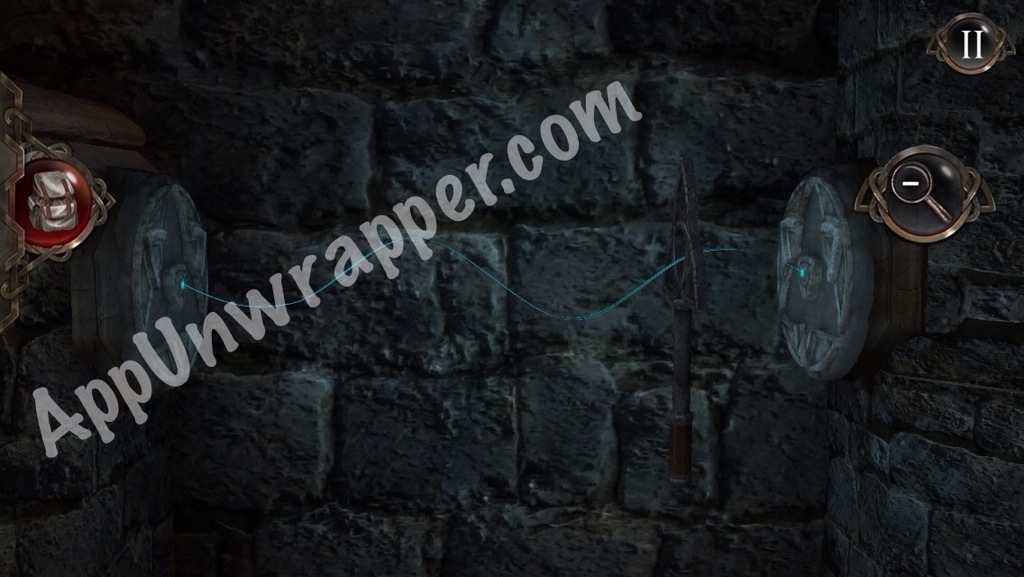 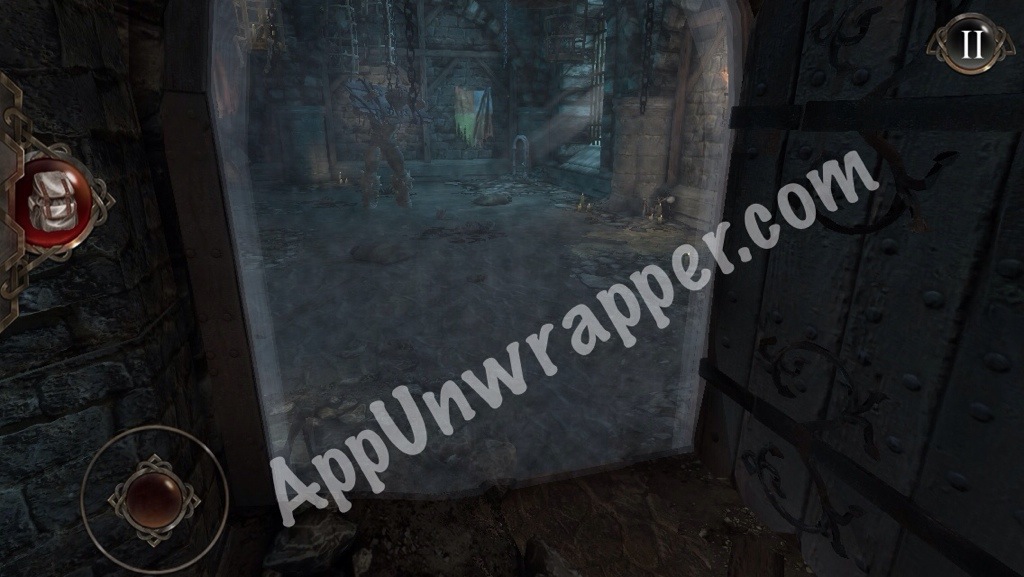 6. There’s a Minotaur on the other side and he charges at you if you go through. (Sure could use that magic eye right about now!) You need to use the alchemy stand now to brew a potion. Place 2 blue stones, 3 orange stones, and 1 green stone in the bowl. (Each blue stone weighs 7 units & you need 14, each orange weighs 4 & you need 12, and each green weighs 6 & you need 6.) Take the ingredients over to the pot by the fire and place them in the pot. Use the bellows to fan the flames a few times and you’ll get the speed potion. 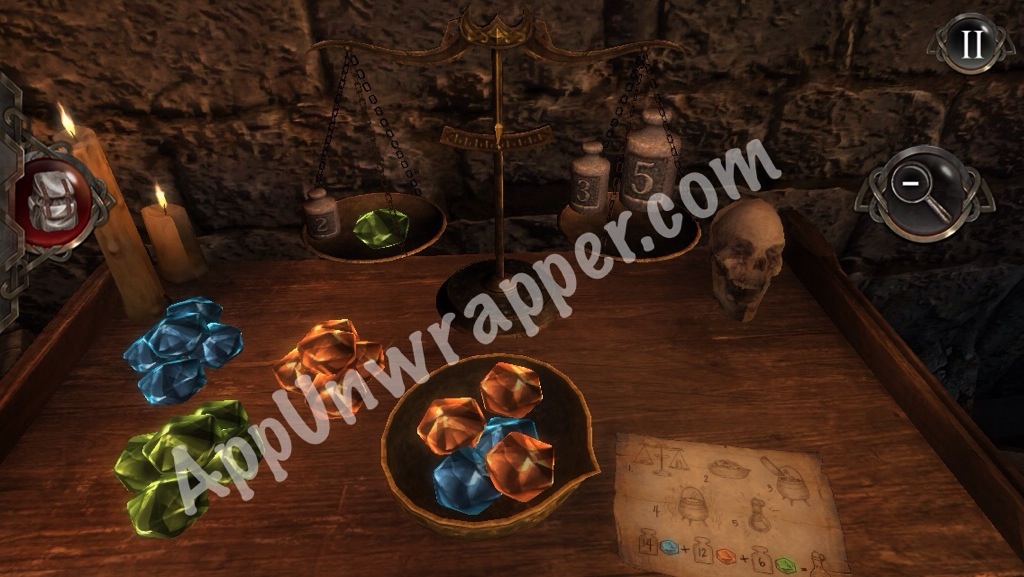 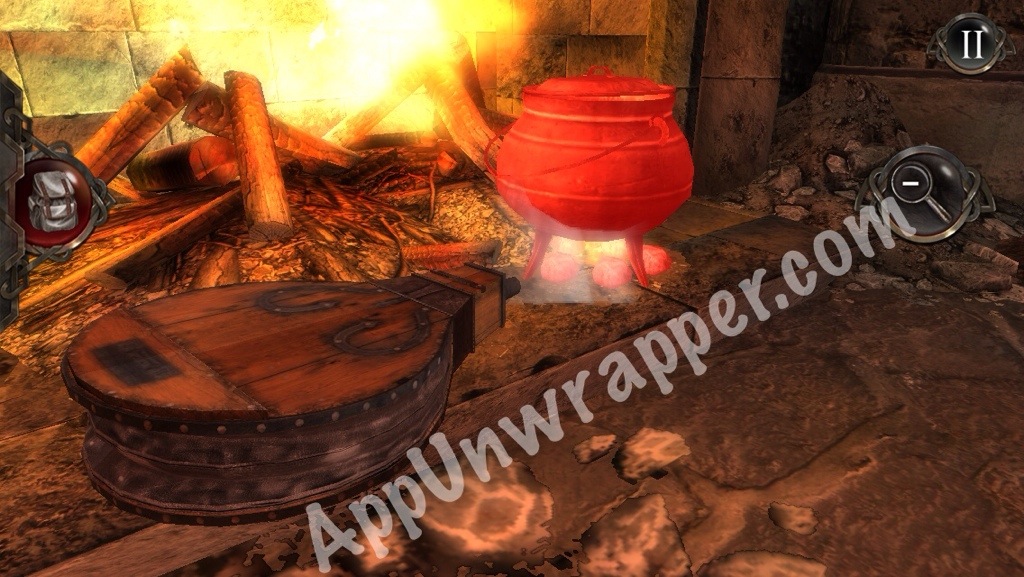 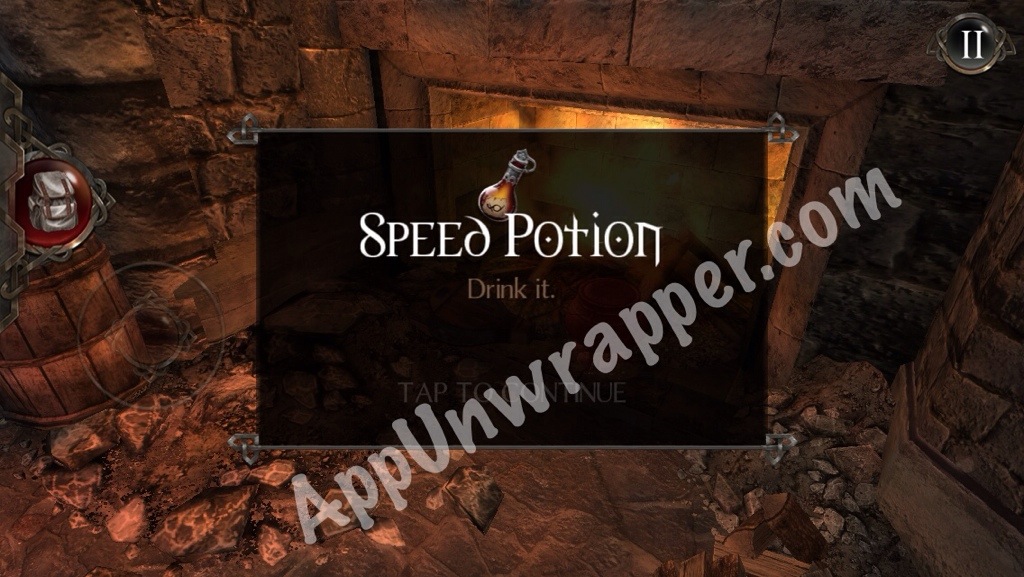 7. Drink the speed potion (everything turns green), then run quickly to the wall to the left of the Minotaur. It’s a weak wall, and you want to lure him to it so he’ll break it down. You may have to sacrifice your life to get this done. Once he breaks the wall down, there will be a force field there instead, which you can run through when you’re resurrected.

**NOTE: I’ve gone back through to that second room without making the speed potion again. You might be able to avoid it altogether to save time getting to the portal portion.** 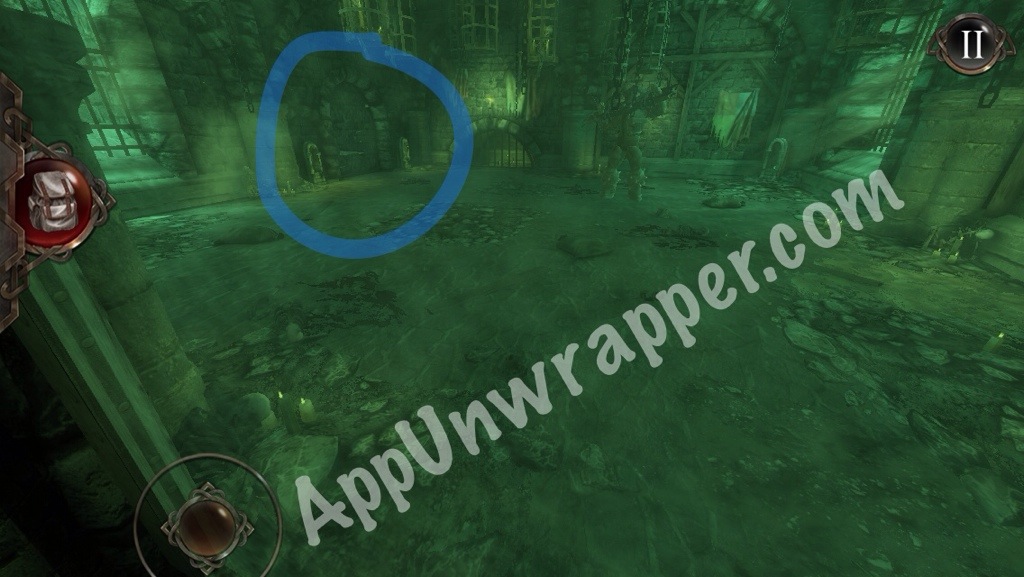 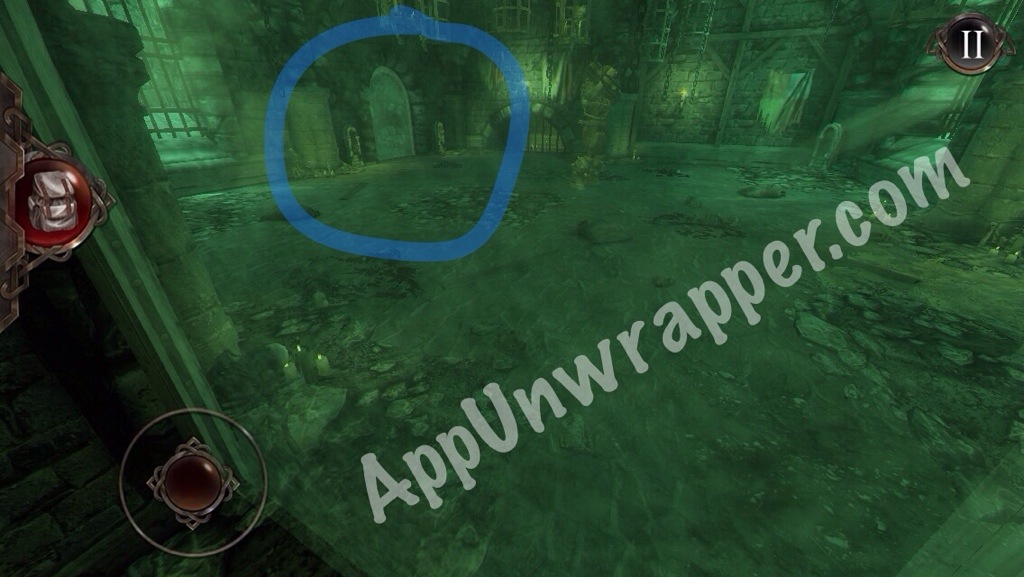 8. Pick up another crystal here. 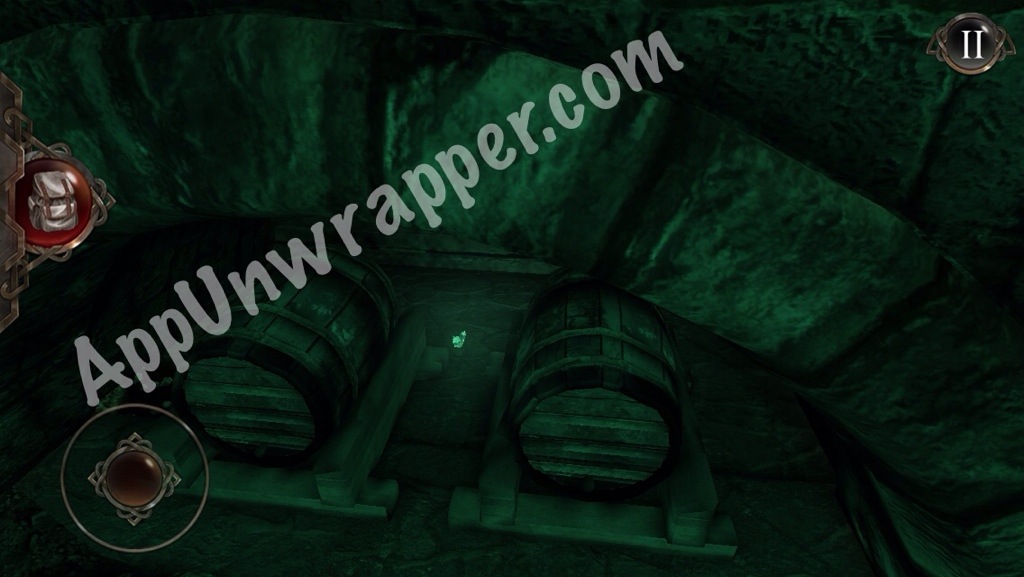 9. There’s also some kind of wormhole-like thing in this room. 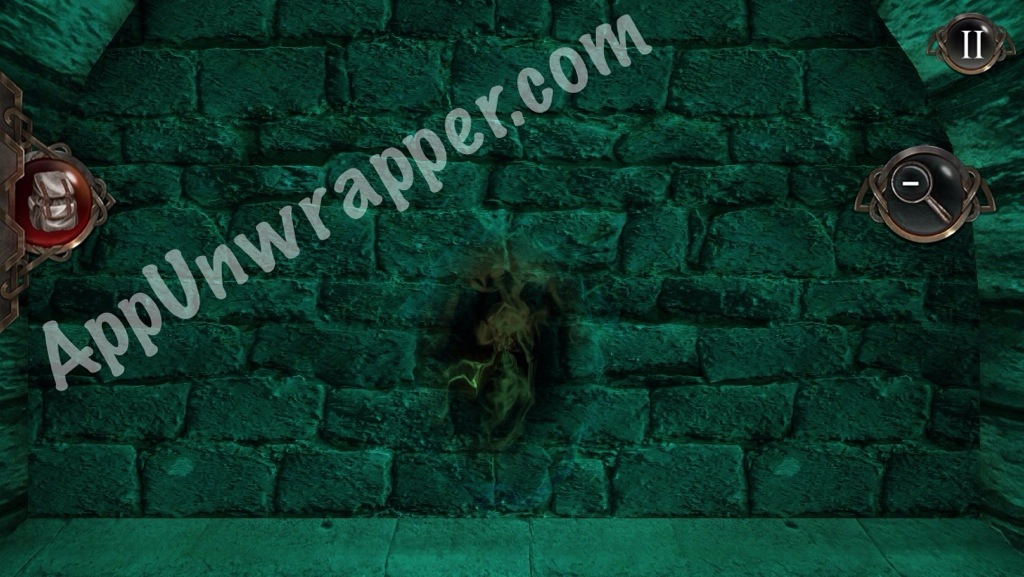 10. Tap on the wormhole/portal, then stretch it out by pinching out. You’ll enter the wormhole and some red skills will attack you. I think you need to keep tapping them to destroy them or you’ll die (again). Also, avoid tapping on the red candles. Use multi-touch to get the skulls and be quick! 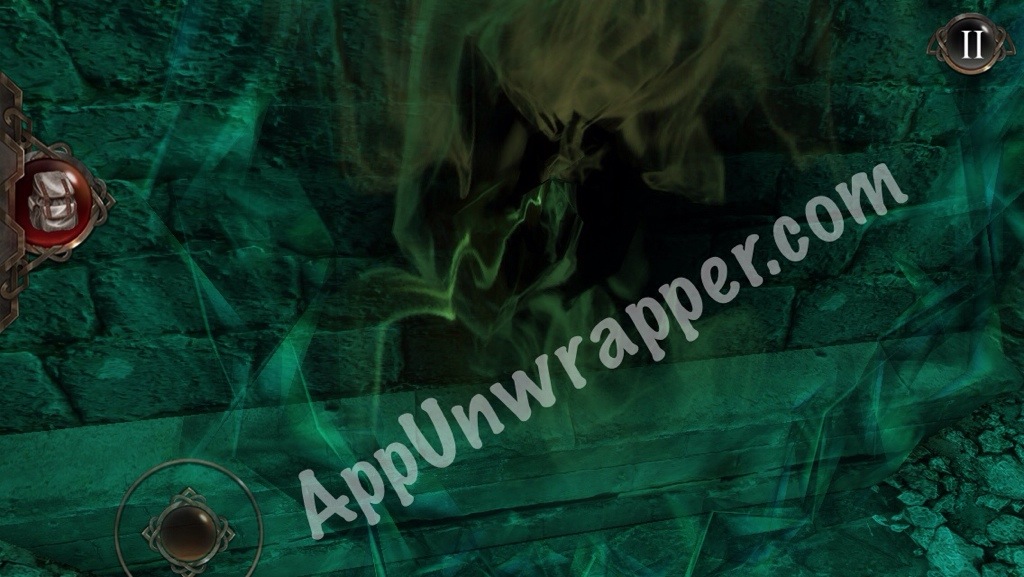 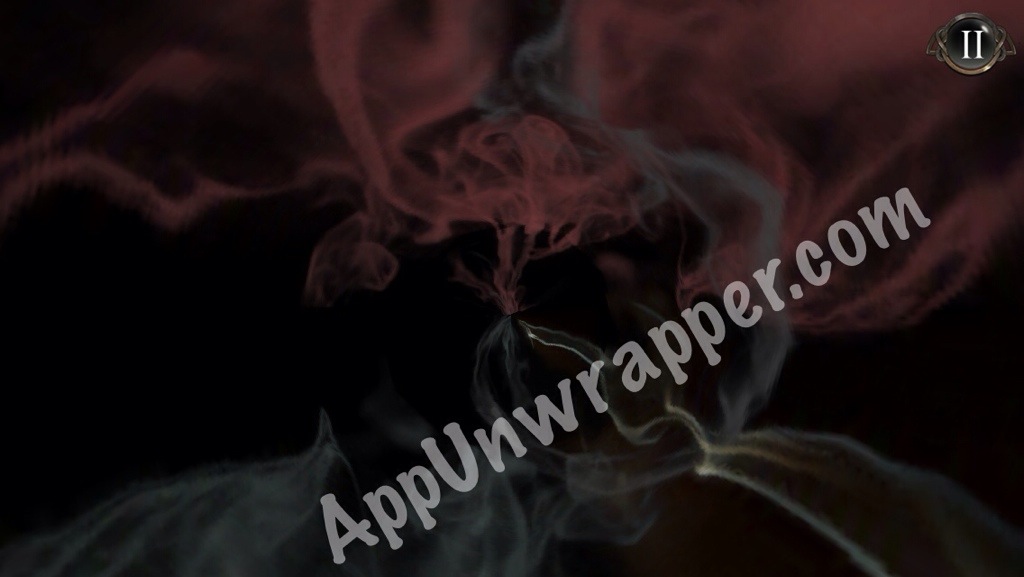 11. In the next room, pick up the key from the small pouch on the ground: 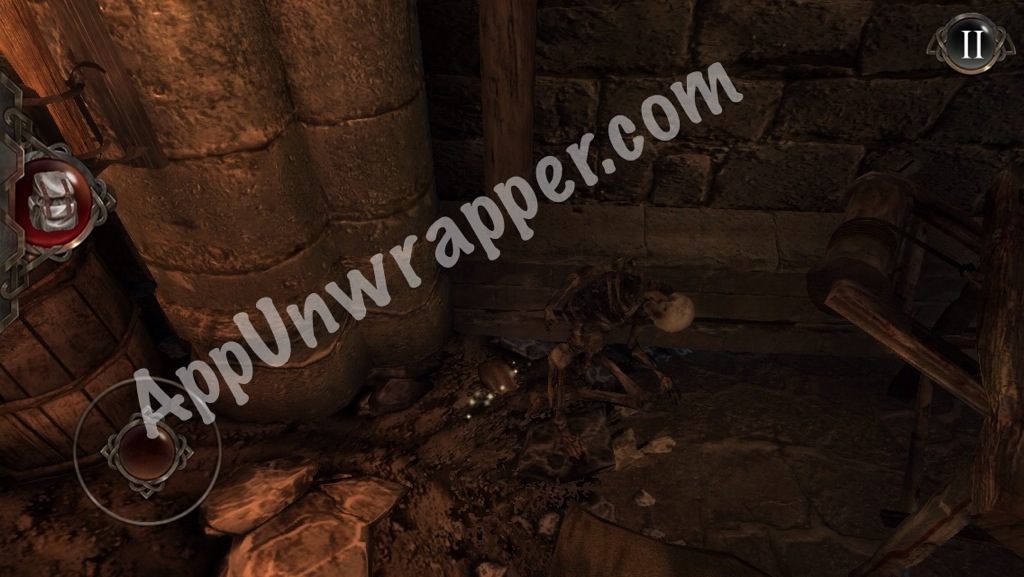 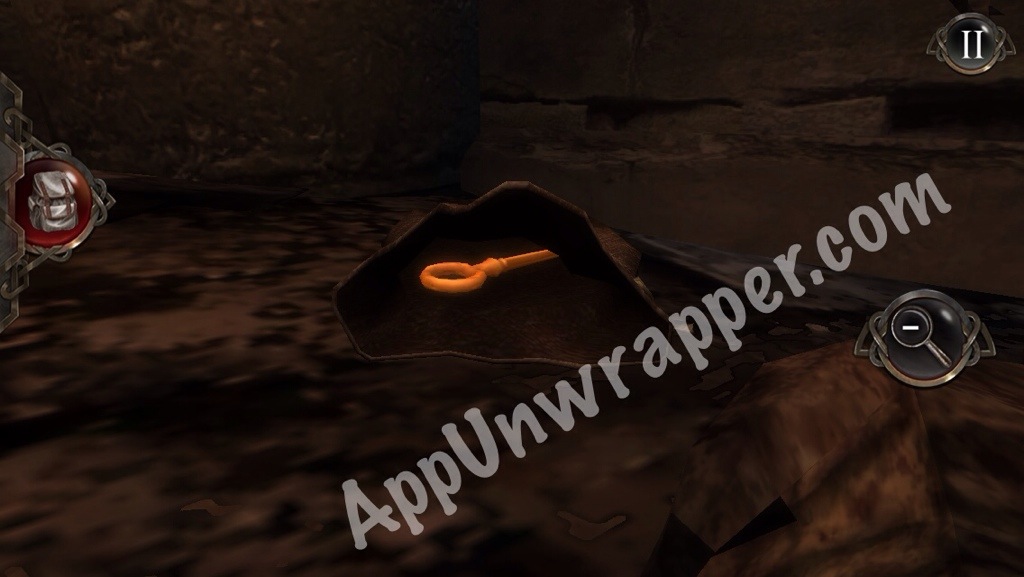 12. Place the key in the keyhole on the left side of the chest game and turn it counter-clockwise to open the case. Now you have to win the chess game. You’re white and have a king and rook (castle), while your opponent, black, has only a king. For those who aren’t familiar with chess, the King can only move one square in any direction (straight or diagonal), while the rook can move any number of squares, but only straight (no diagonal). 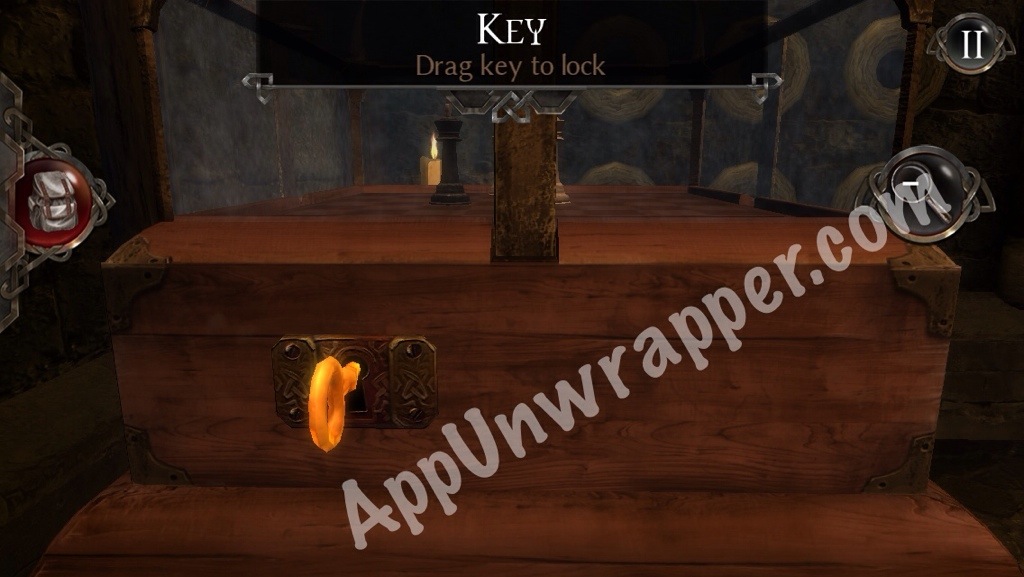 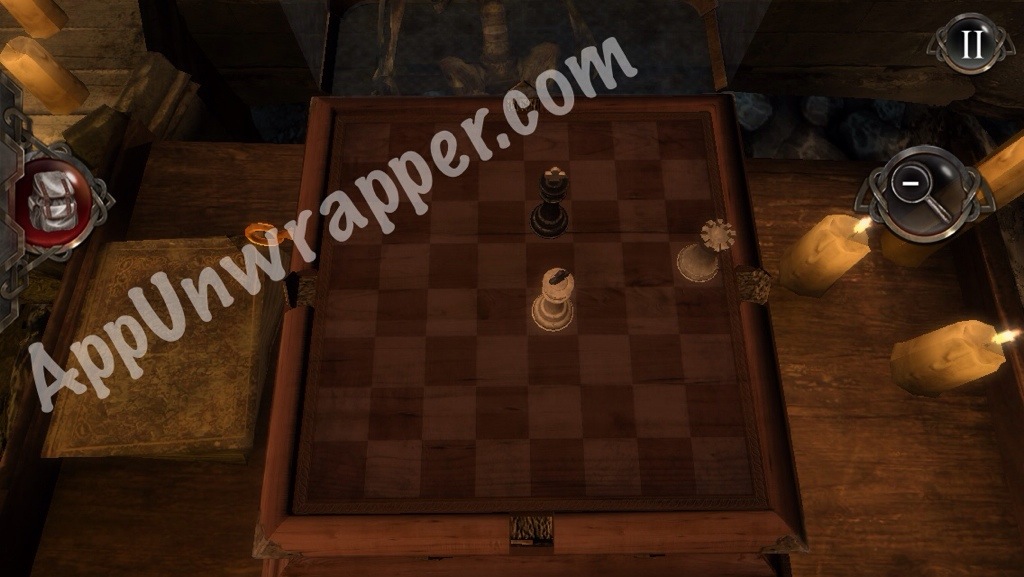 13. In order to force the black king into checkmate, you want to get your pieces into this setup: 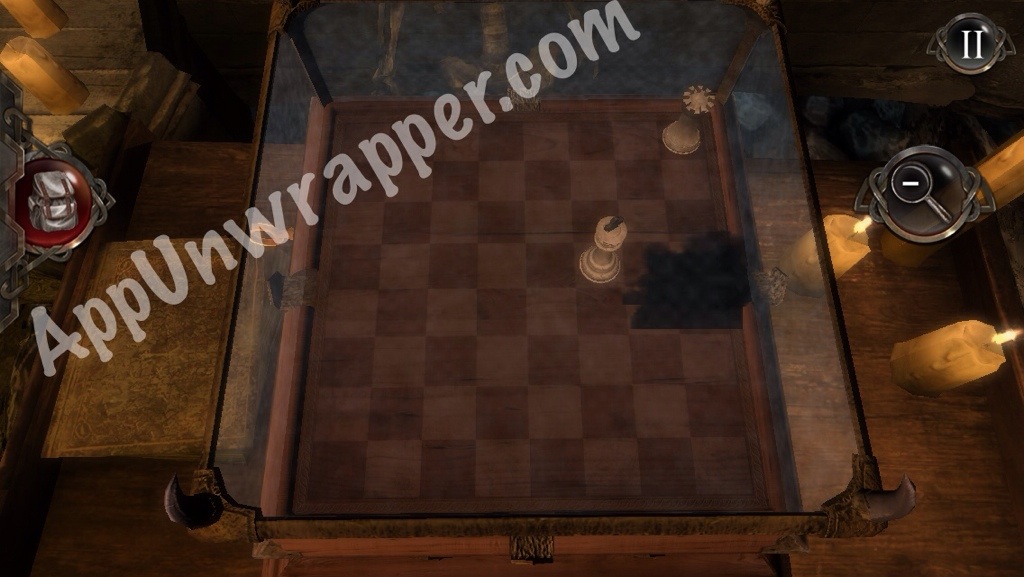 14. Take the Orange Crystal and place it in the mechanism with the other orange crystals. 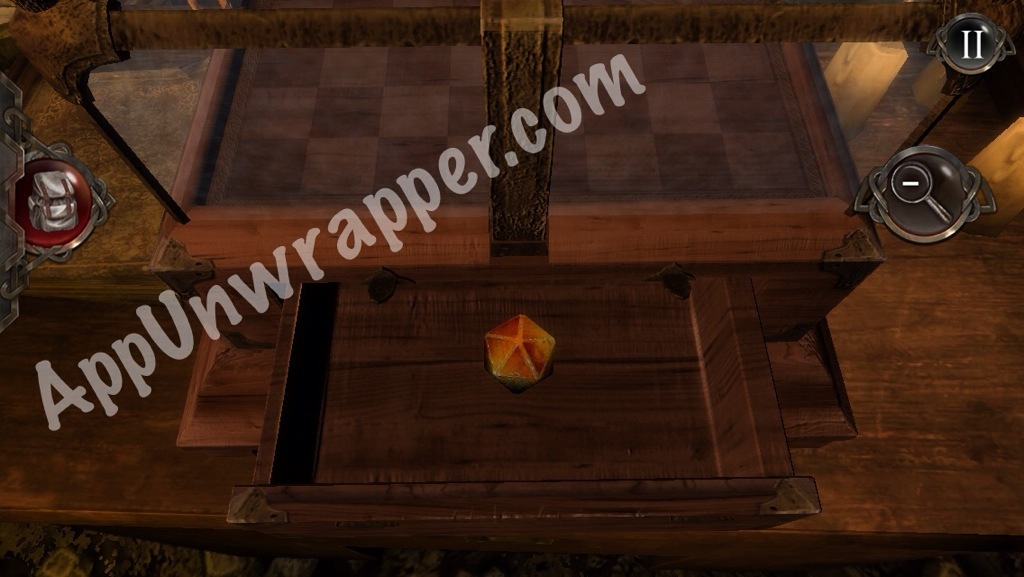 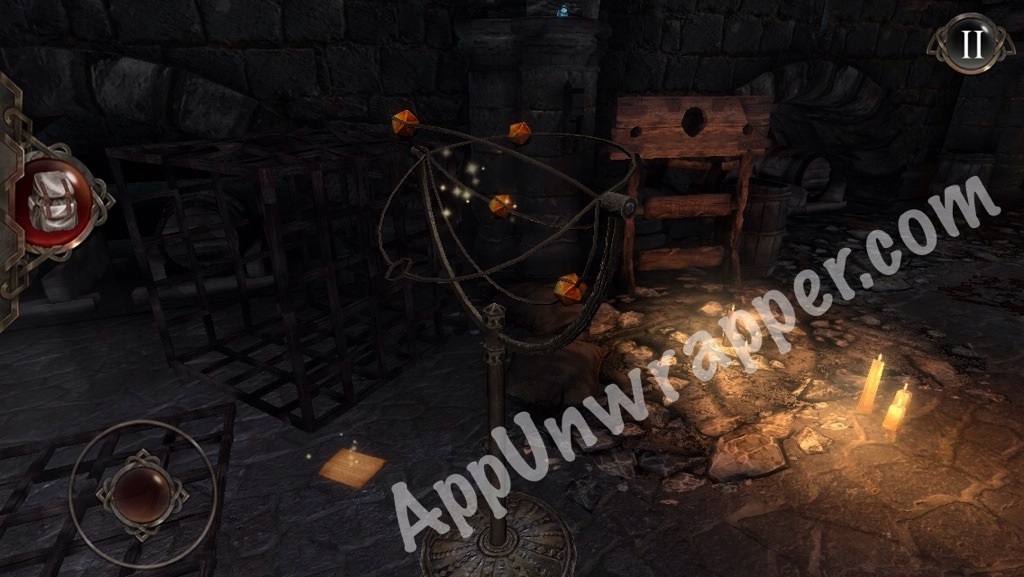 15. Read the note on the floor and take the blue crystal. 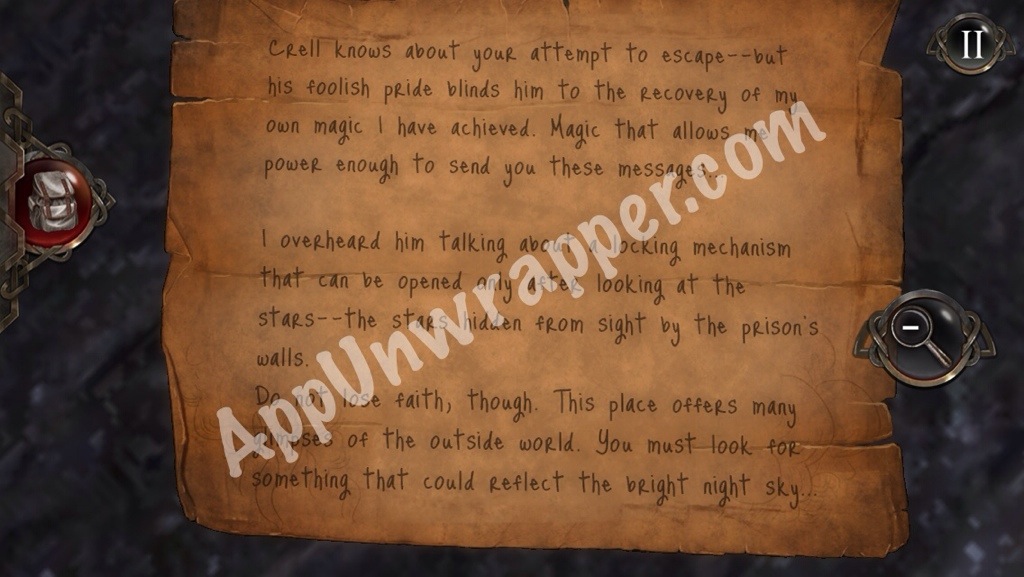 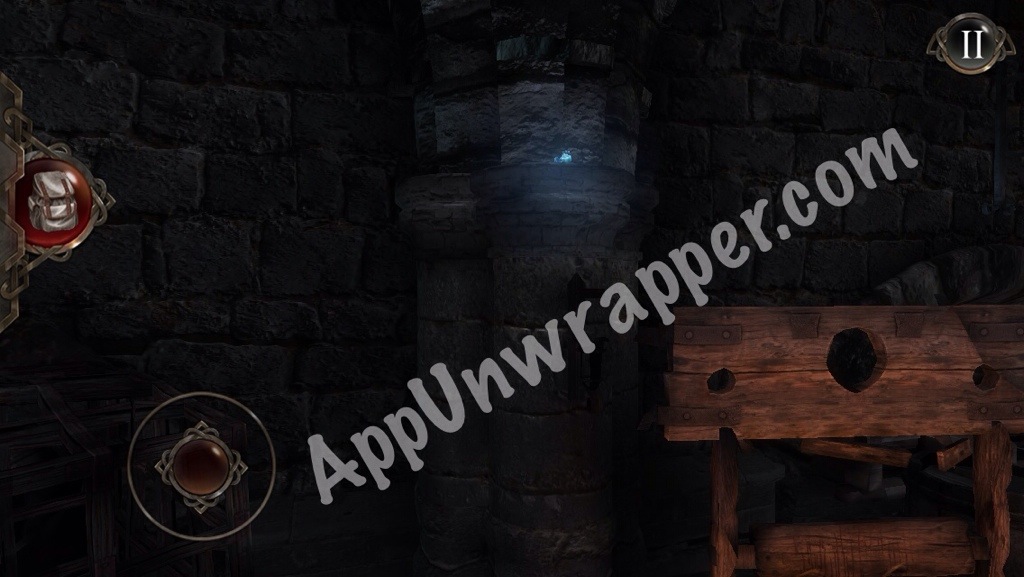 16. Match the orange crystals to the five candles and the door will open. You made it through Chamber 5! 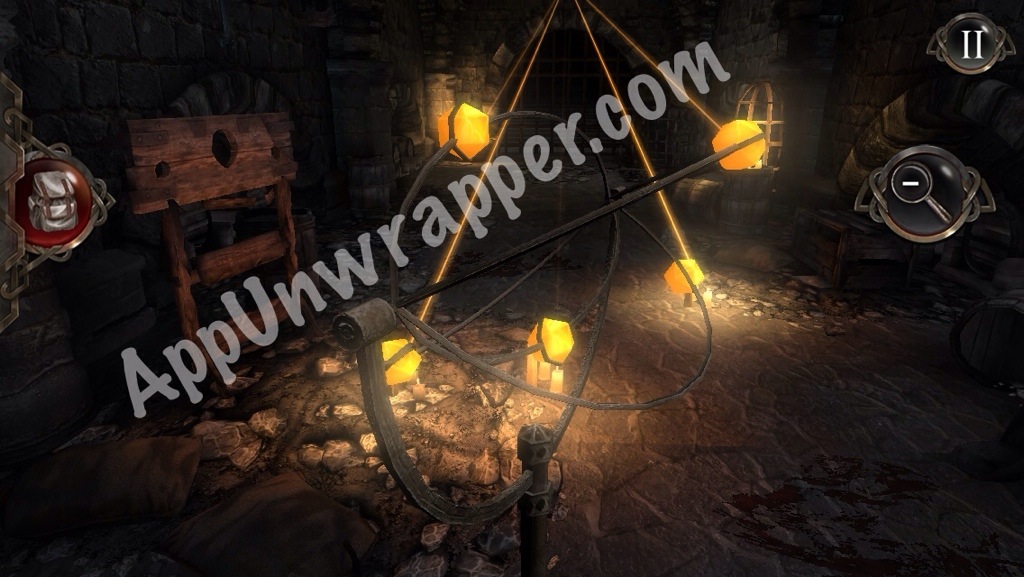 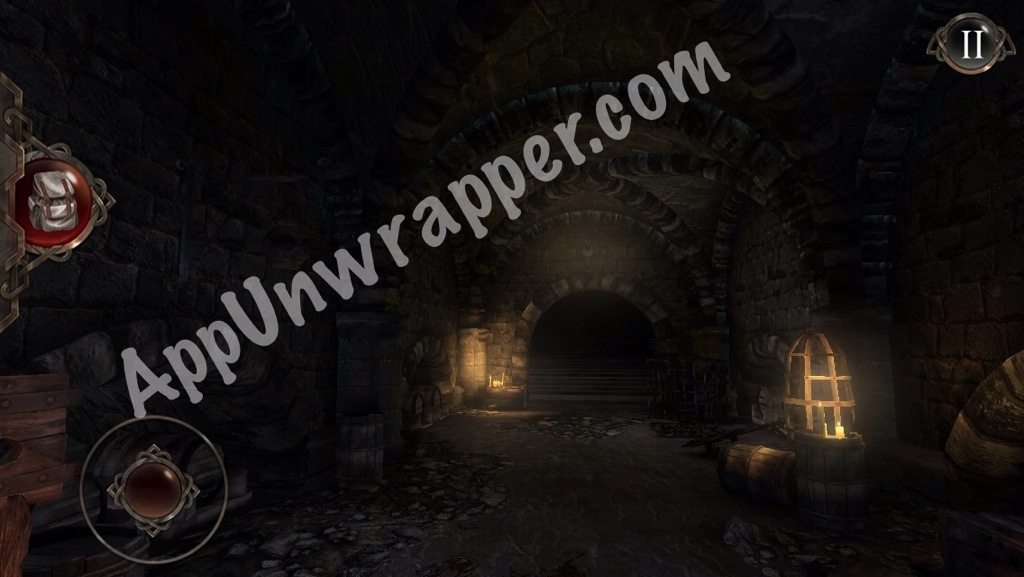 Continue to the Chamber 6 walkthrough.