This is a complete step-by-step walkthrough guide with hints, tips, tricks, answers and solutions for the iOS and Android game Mechanical Box (M-Box, MechBox – Open the Door Puzzle) by Andrey Sklyarov (Ogurec Apps). Feel free to ask for extra help in the comments section.

You can watch my video walkthrough below or scroll down for my step-by-step walkthrough.

Main menu: Drag the description out of the way. Tap the third button on the top to light it up, then press PLAY. 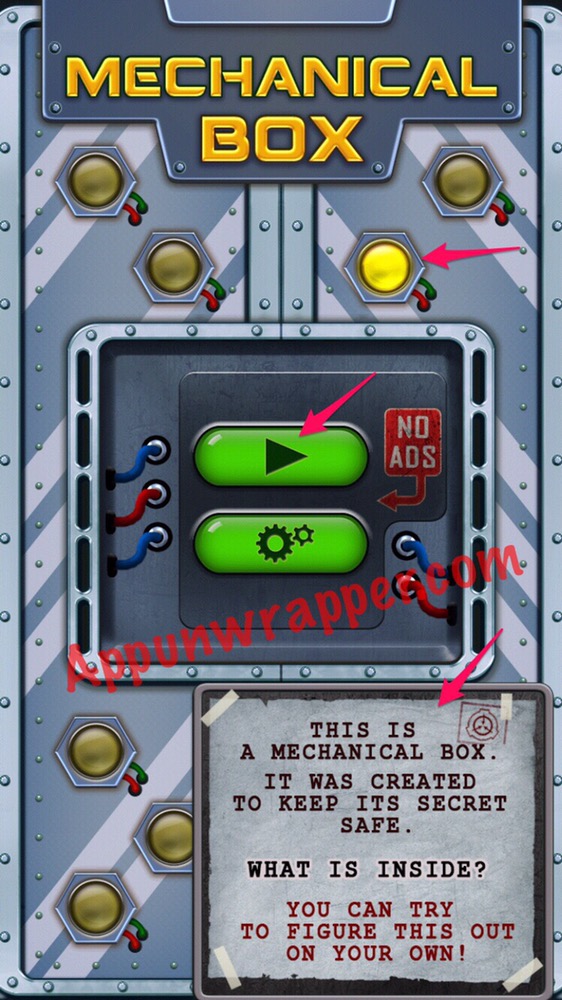 Level 1: The next screen says, “>USE THE BRUTE-FORCE, LUKE.” This means use trial-and-error to figure out the order for the number pad. It goes 245913687. It will then say 11001. Tap the red LOCK button until the glass over it shatters. Then press the button itself. Five more buttons will appear. The clue for them is the 11001. Tap the first two and the last one to copy that sequence. Then press the red button again. 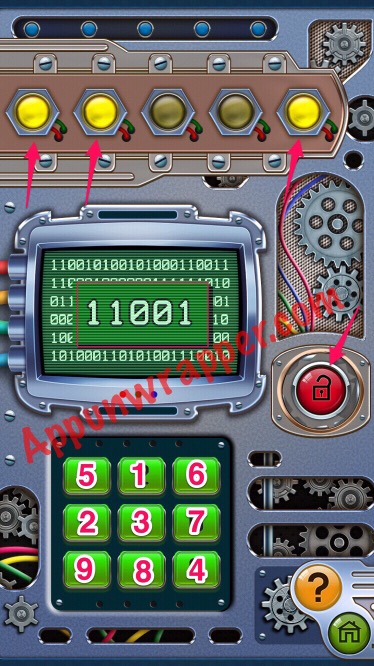 Level 2: Notice the words RESERVE POWER – 4753. Enter 4753 into the combination lock and press the green button. Drag the battery to the magnifying glass to turn the UV (purple) light on. Then, drag the magnifying glass around the screen to find four numbers — 5, 8, 6 & 9. They go in that order because of the number of dots around each of them. So enter 5869 and press the the green button again to go to the next screen. 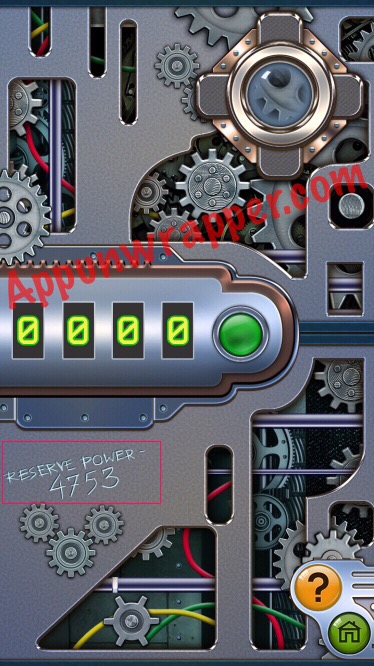 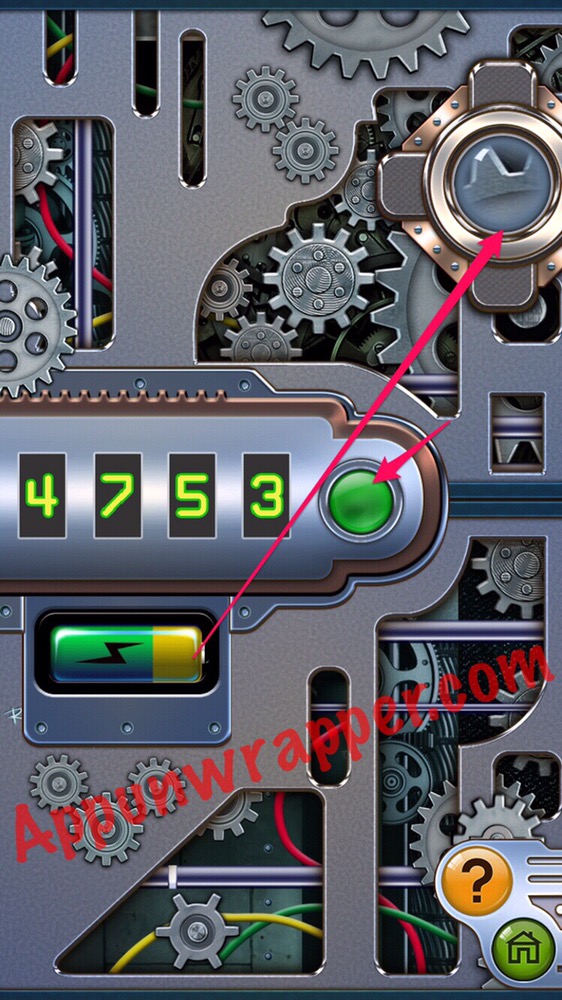 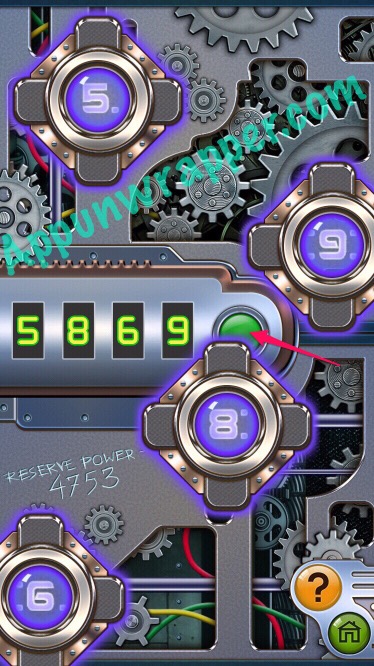 Level 3: First, pull the lever to reveal the numbers 3381. Next hold the green button down and release it when the green light is on. It’s likely going to take a few tries. But once you manage it, a keypad will appear. Play with the lever until it breaks and then drag that piece to the right of the keypad. Turn on the keypad and enter 3381. 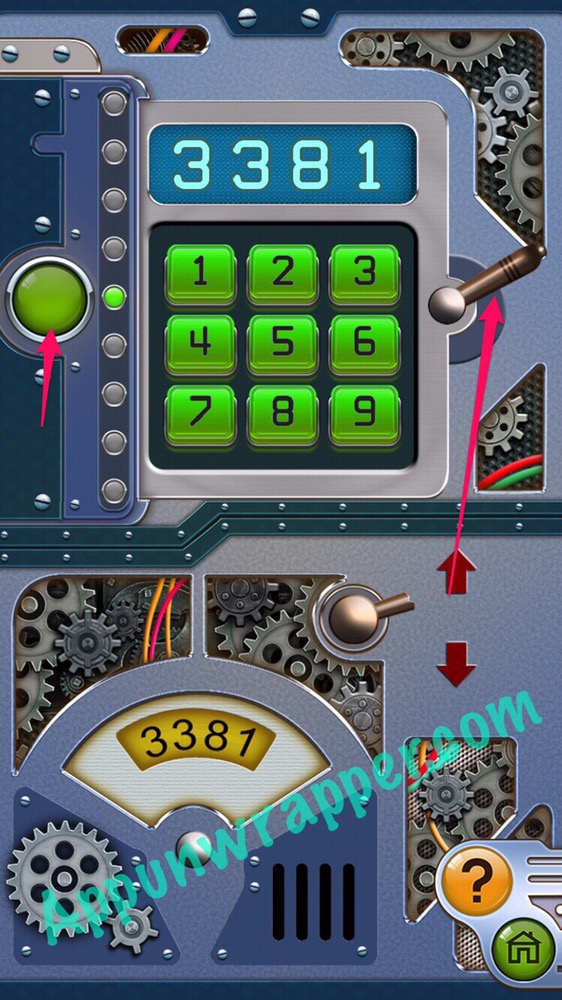 Level 4: This is a grabber machine. You need to enter 4-letter words to control it. Start with DOWN, then LEFT, DOWN, GRAB, BACK, DROP. Then OPEN. Drag the fuse to the left of the red lock button and press the button to clear the level. 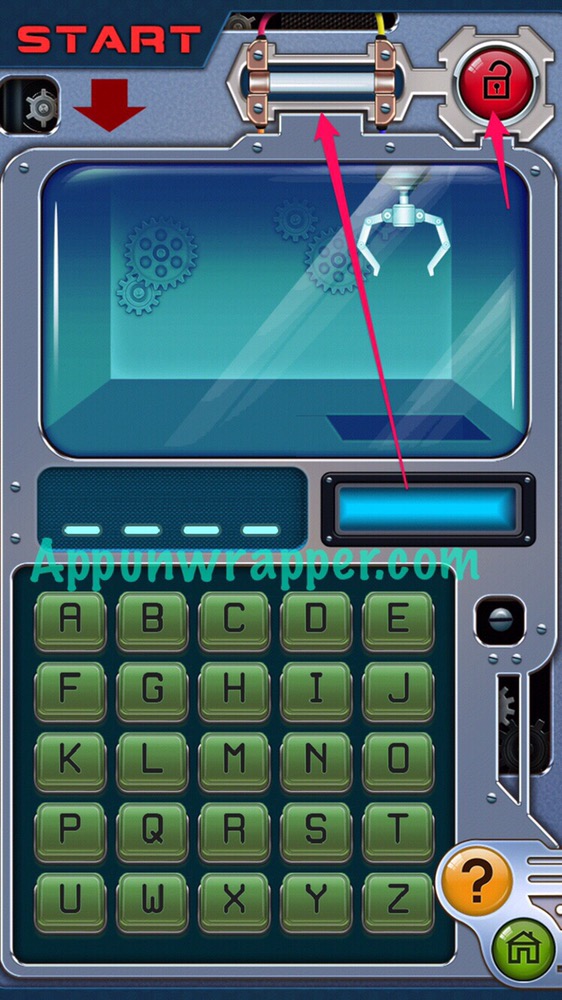 Level 5: Notice the arrow on the upper right that’s pointing to the left. If you tap and drag out from the left side of the screen, you’ll be able to access a screwdriver. Use it on the buttons to get a fuse. Then use he screwdriver to open the panel on the lower left that’s missing one screw. Place the fuse where the screwdriver was and slide it back in. Then, copy the pattern on the inside of the panel lid onto the light buttons and press the green button after it lights up. 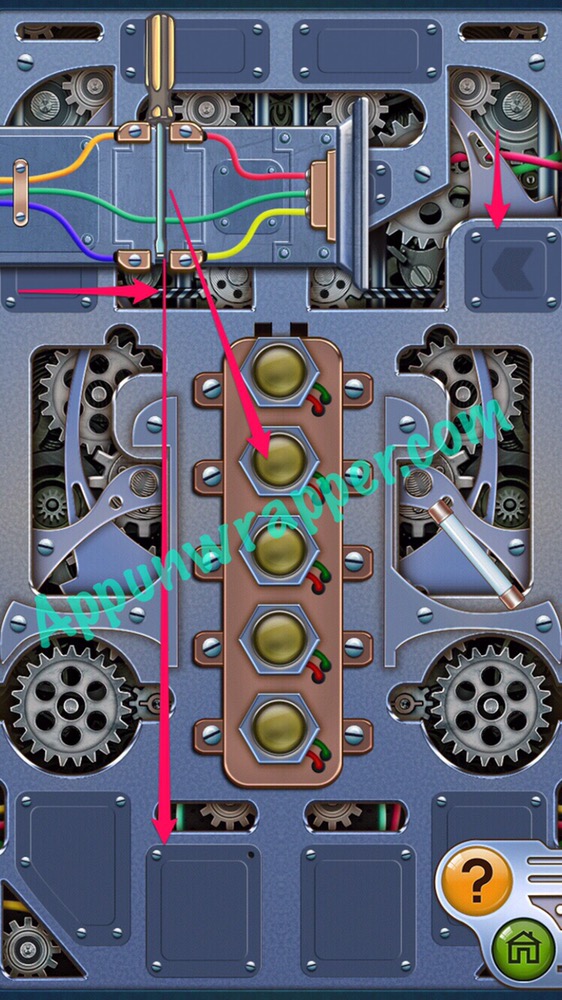 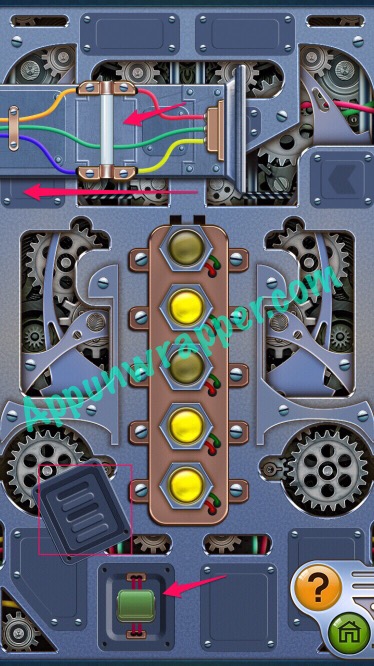 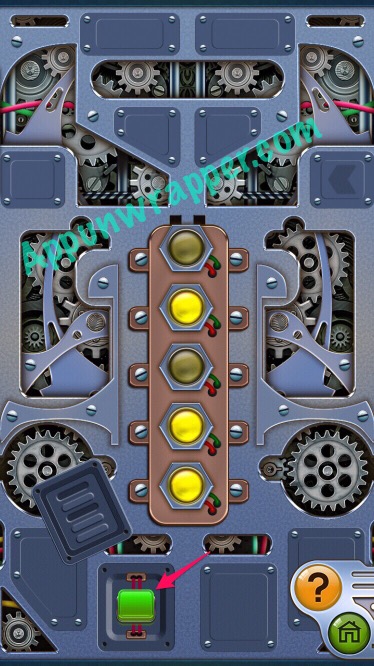 Level 6: Pull the number pad down to reveal a screwdriver. Use it to remove the panel with a lightning bolt on it. Also, slide the home button to the left to see the numbers 2714. Enter those numbers into the keypad to get a battery. Drag the battery to the slot the lightning bolt was covering. Next, you need to get all three buttons pressed at once. To do that, first press the button to the left of the battery. Then, remove the battery. Press the top right button, then the bottom right button. Now all three buttons should be down and a panel will open, revealing a grid with blue, red, and green boxes. Notice where they are on the grid. Count the boxes. Blue = 1, Red = 9, Green = 25. Now, order them according to the rainbow (ROYGBIV), so it goes Red, Green, Blue — or 9251. Enter that into the keypad to clear the level. 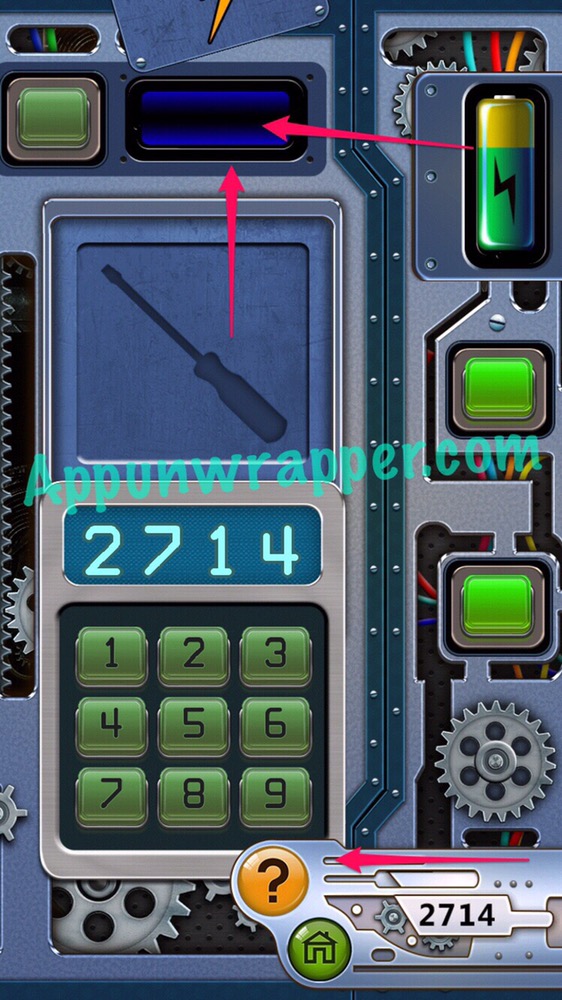 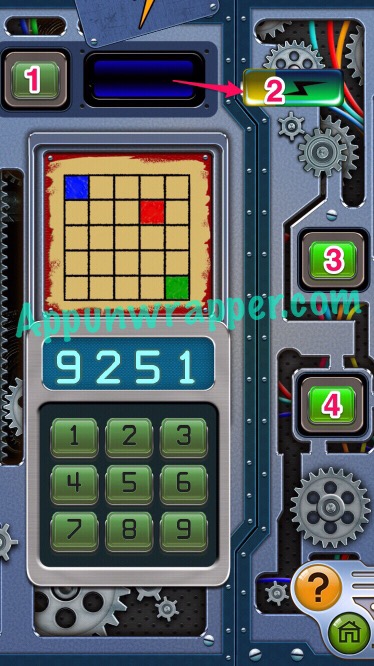 Level 7: Notice there’s a cut wire near the power button. Tap on the home/exit button and grab the piece of wire from the upper right corner. Drag it to the cut wire to fix it. This next part is super annoying. You have to press the big green power button until the first dial lines up with the light. Then continue and go through each one. If you mess up any of them, you’ll have to start back at the beginning. Yeah, frustrating. Once you do it, the numbers for the code is hidden in plain sight. It’s the four lines to the right. Enter 2123 and press the small green button to complete the level. 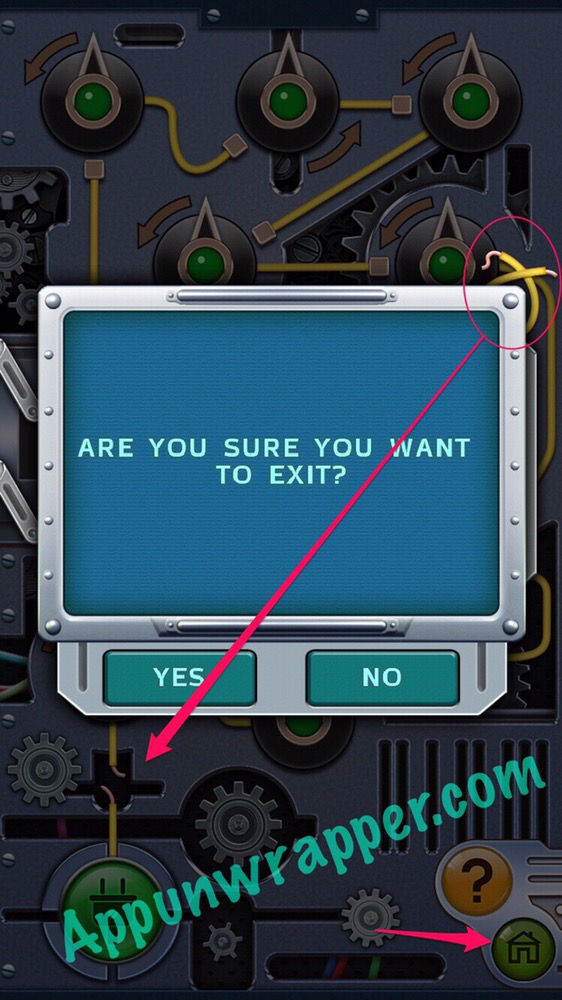 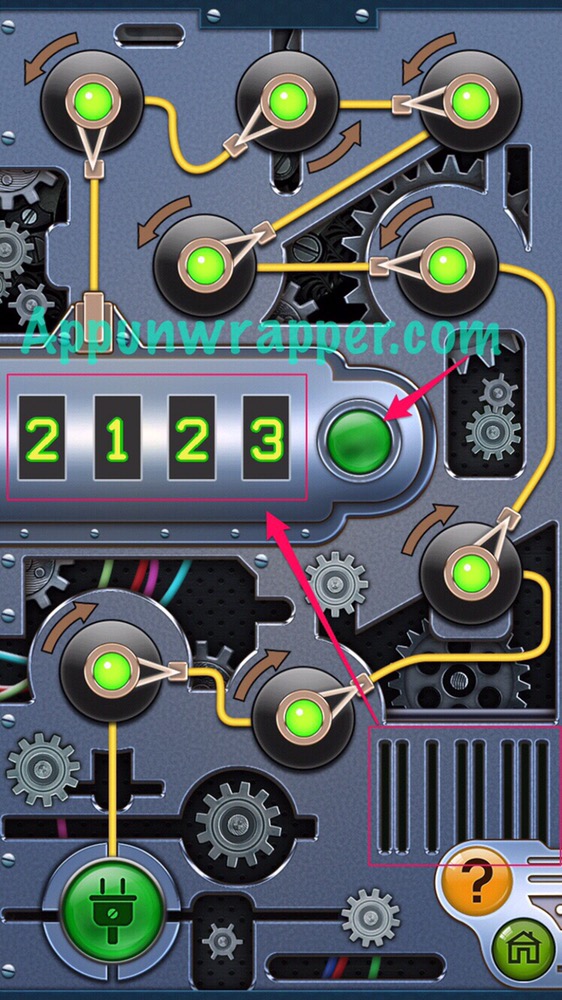 Level 8: Drag the gear on the lower left to the slot on the upper right and press the red button to turn on the screen. It says RANDOMIZE. Just punch in random numbers and eventually it should work and show you the numbers 2810. But there’s no 0 on the keypad! So the key is the word RANDOMIZE. Give each letter a number from 1 to 9. Then, spell out ZERO in numbers (yeah, it’s a big stretch. This game is getting ridiculous) so you get Z = 8, E = 9, R = 1, and O = 5. Enter 8851. Now the 0 button appears and you can enter 2810! 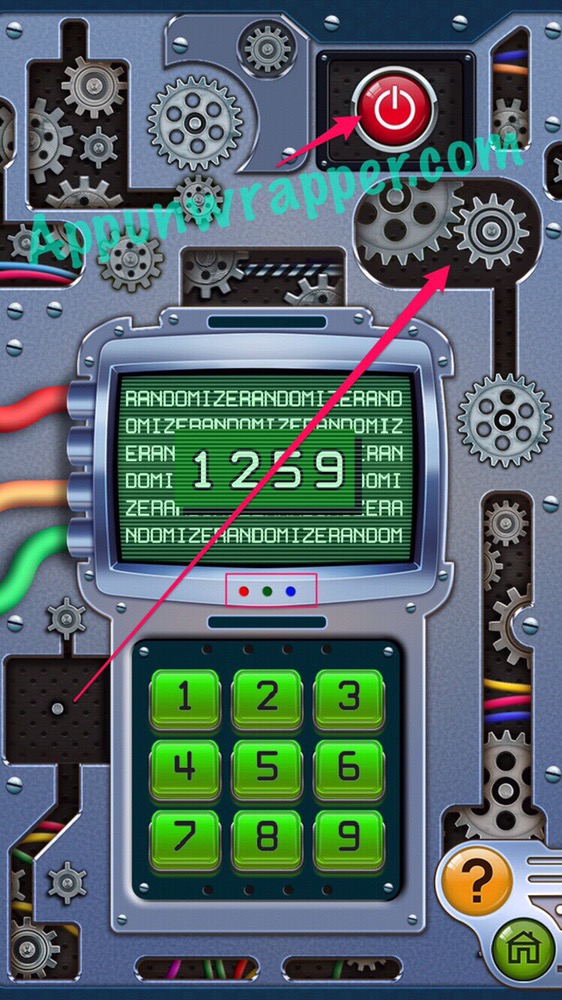 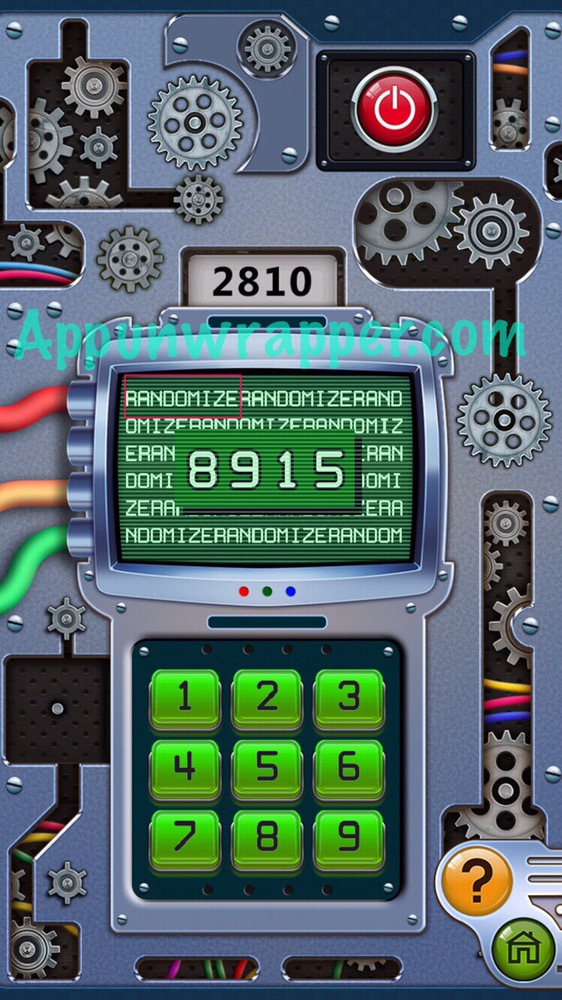 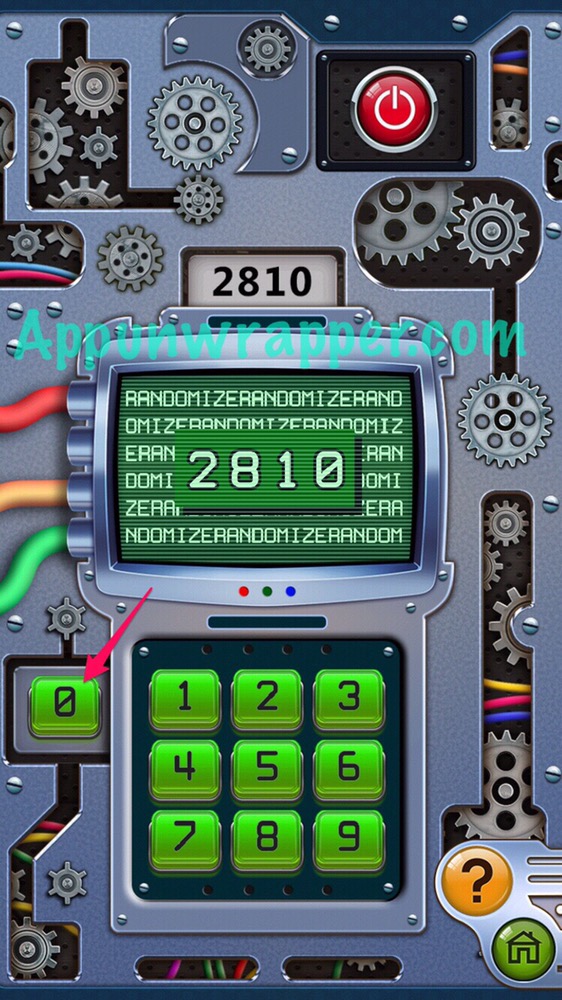 Level 9: Slide the home/exit button up to reveal another button at the top. You need to figure out which buttons to press to power up the keypad. AND means all wires leading into it have to be either on or off, depending what you want the end result to be, OR means at least one wire leading into it has to be on if you want it on, and NOT changes a wire leading into it to the opposite, such as on = off or off = on. It’s a bit confusing, but I’ll show you the right buttons to press if you’re having trouble. Once the keypad is powered on, slide the home button back down and reveal the numbers 8355. Enter those into the keypad to complete the level. 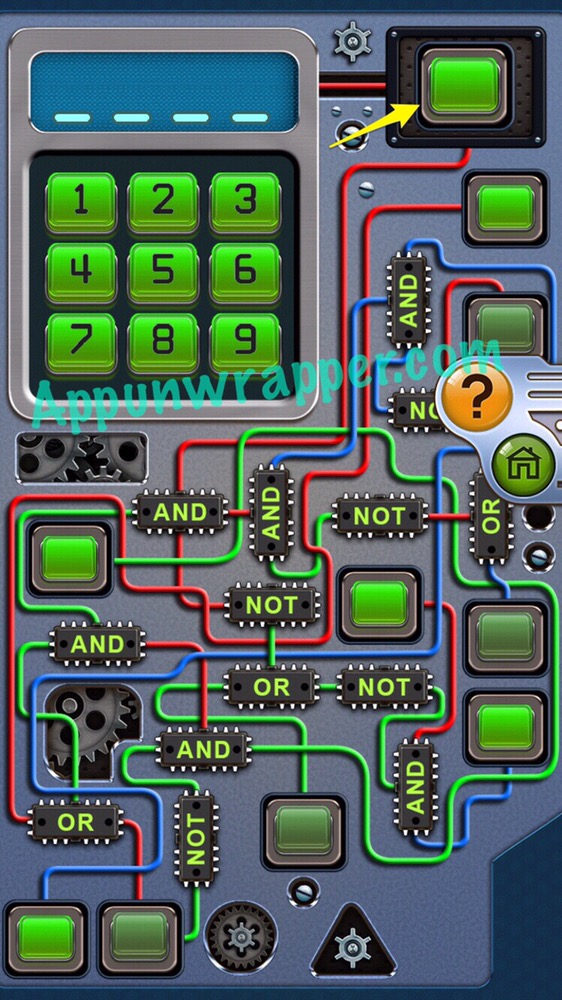 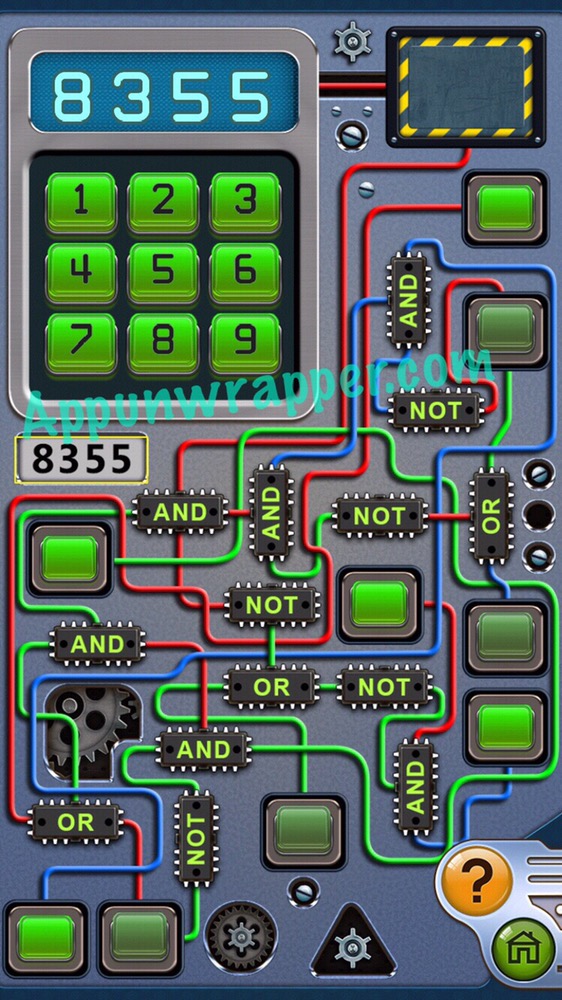 Level 10: This is like a memory game. You need to match all the pairs of icons. It’s different each time, so I can’t really help you with it. Just keep trying till you get it. You can take screenshots to help you, as long as you don’t restart the level. After that, press the KEY button to begin (as it instructs). It will give you six different sequences of symbols to copy. You have to do them pretty quickly, before the timer runs out. Then it will give you a password. It won’t work and will say RESERVE SECURITY SYSTEM ACTIVATED ACCESS DENIED. Press the first button of the password again and then it will give you a new one. But there will be a diamond in it and there’s no diamond button. To make the diamond, don’t type the password at all yet. Instead, combine carbon + pressure + temperature + time. A diamond button will appear and now you can enter the real password. 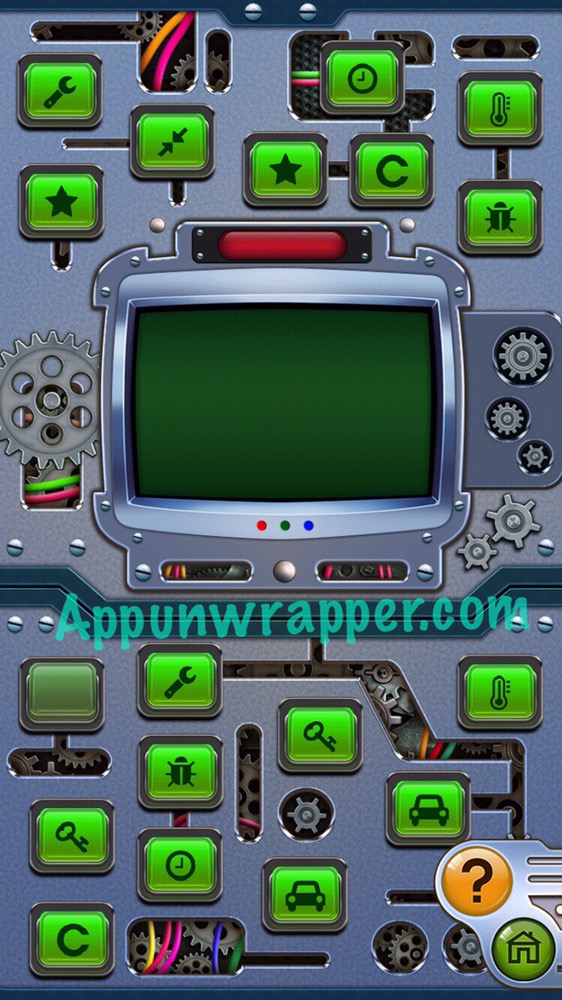 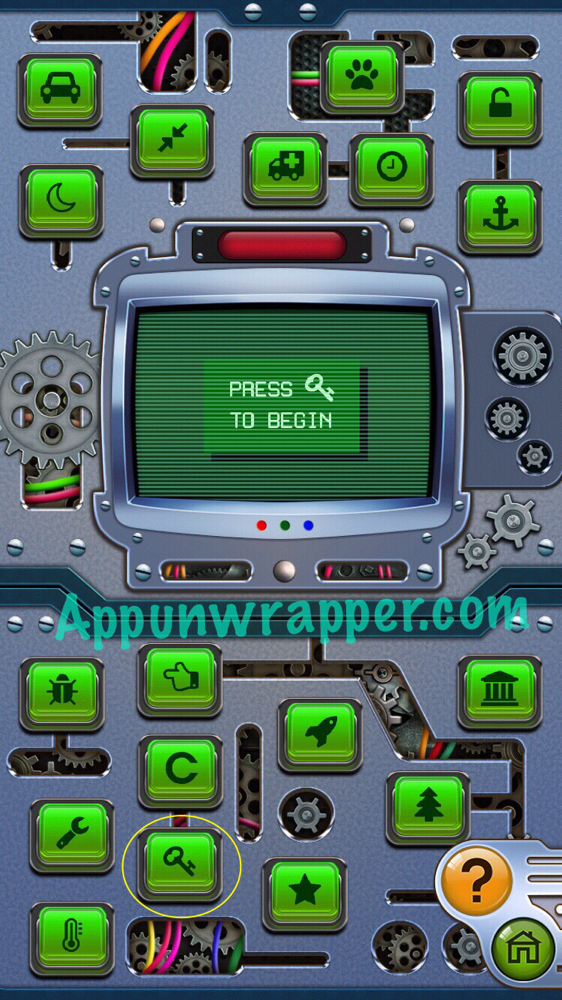 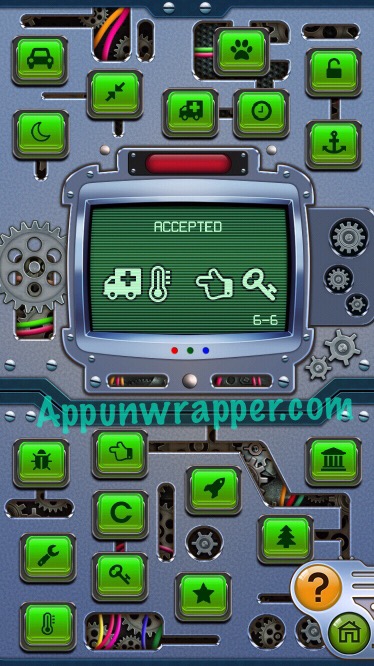 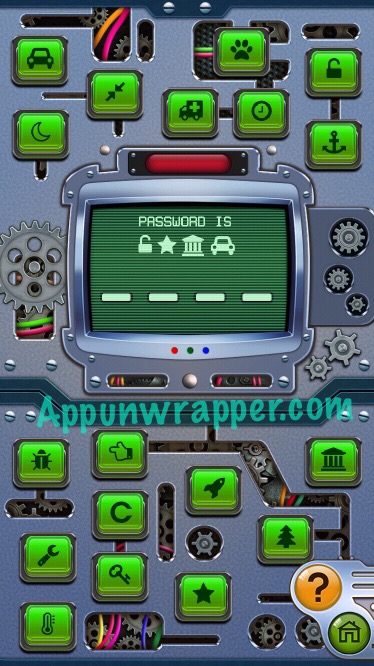 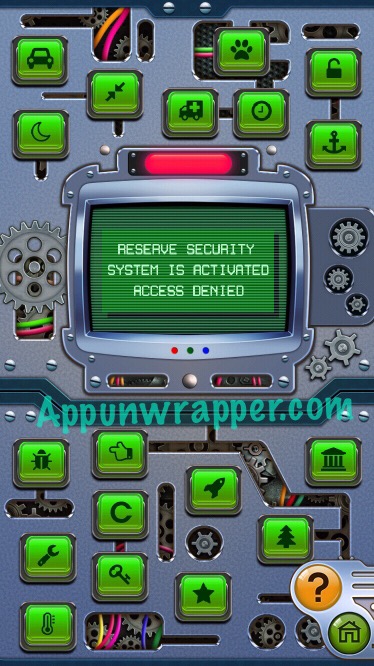 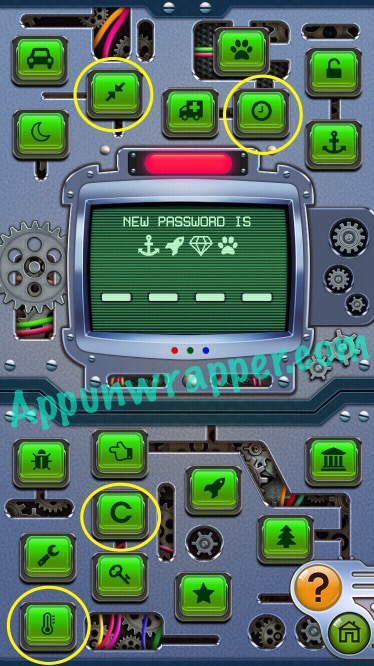 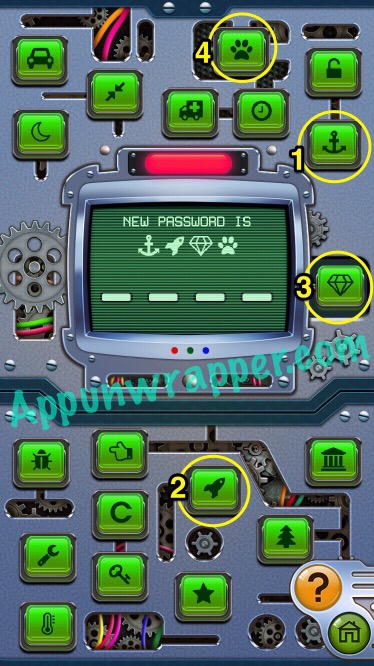 Secret Level (Level 11): Notice it says NUMBER ONE. Drag the level 1 button to the first empty slot and it will turn into 11! Press on it to access level 11. 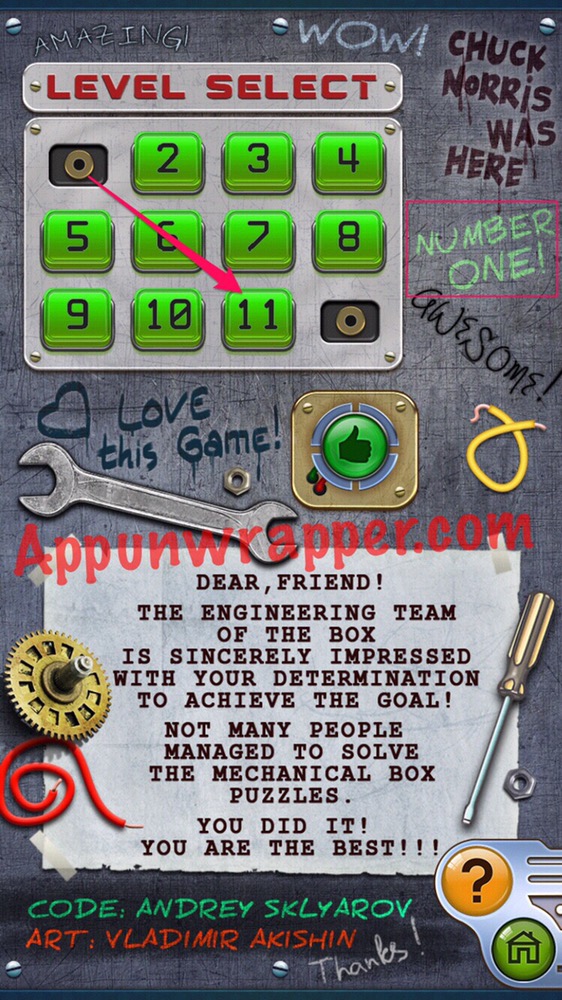 Now, look at the four number buttons. Orange = O = 1, Purple = P = 3, White = W = 4, and Red = R = 5. Now look at the words NO POWER. The N and the E flicker, so you get OPOWR. Translate those into numbers and you get 13145. Press the buttons in that order. A battery slot will appear. Pull the little metal piece in the lower left corner to the left to get a battery-shaped metal panel to appear. Next, look at the five lights/lamps at the top. Notice that each square has a corner cut off. What you want to do is tap the number button that’s in the opposite position of that cut corner. So it goes 33451. Move the battery to the slot at the bottom. Now you have another clue: ? = C/d. Or ? = Circumference/Diameter. This is related to Pi, which is 3.1415. Press the buttons in order of 31415. Press the red lock button to complete the secret level! 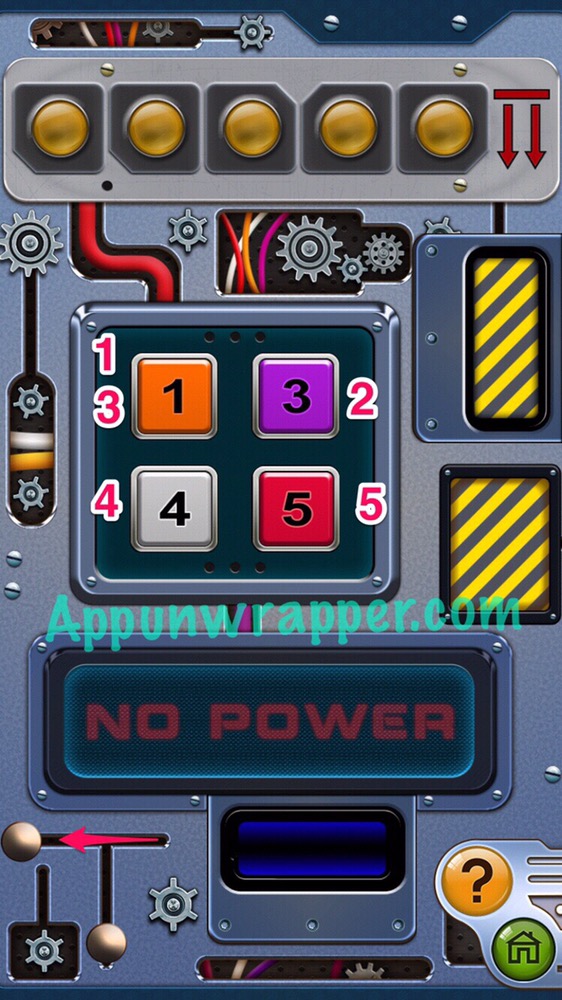 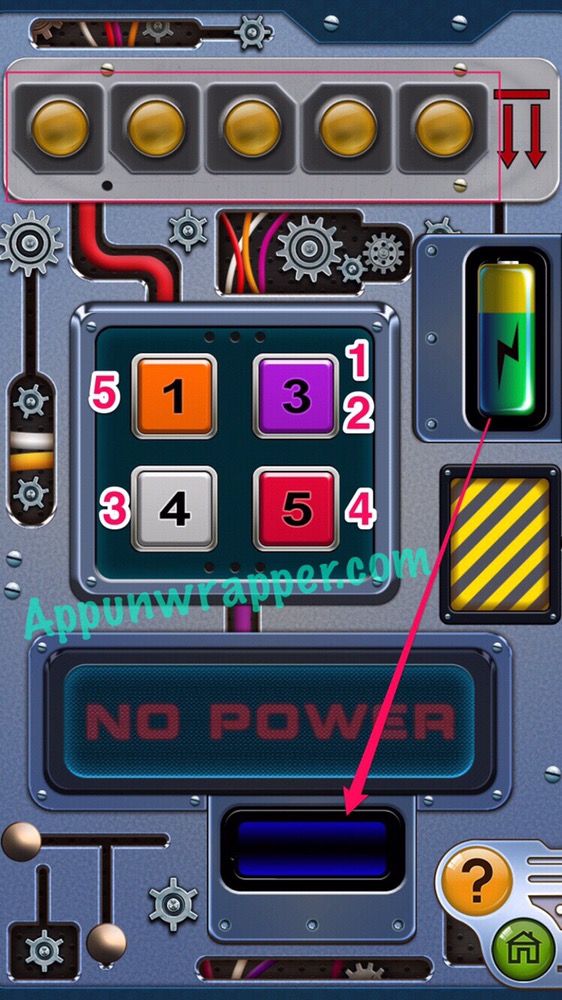 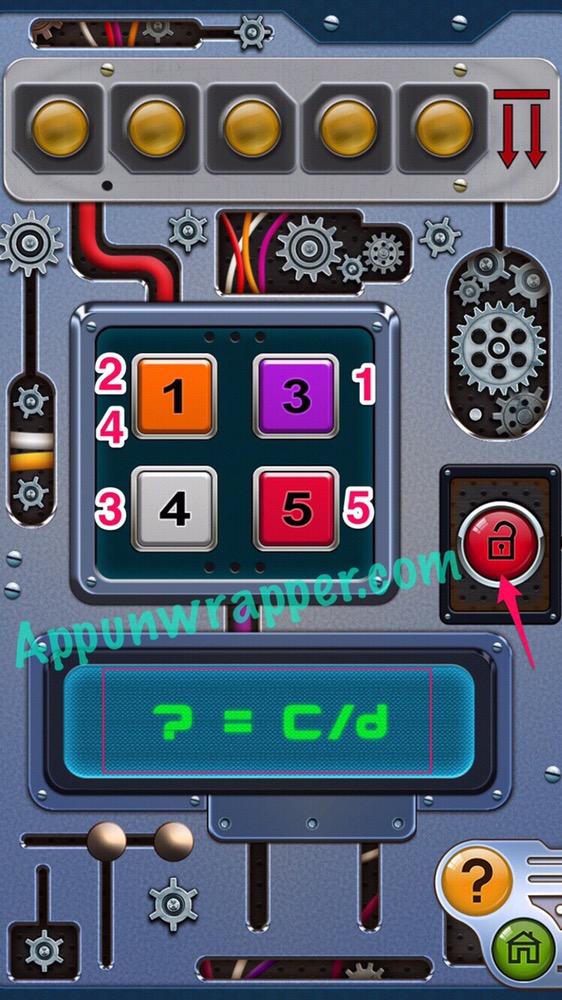 That’s not all! There’s a new game out! See my walkthrough for MechBox 2.

A Darker Shade of Red: Walkthrough