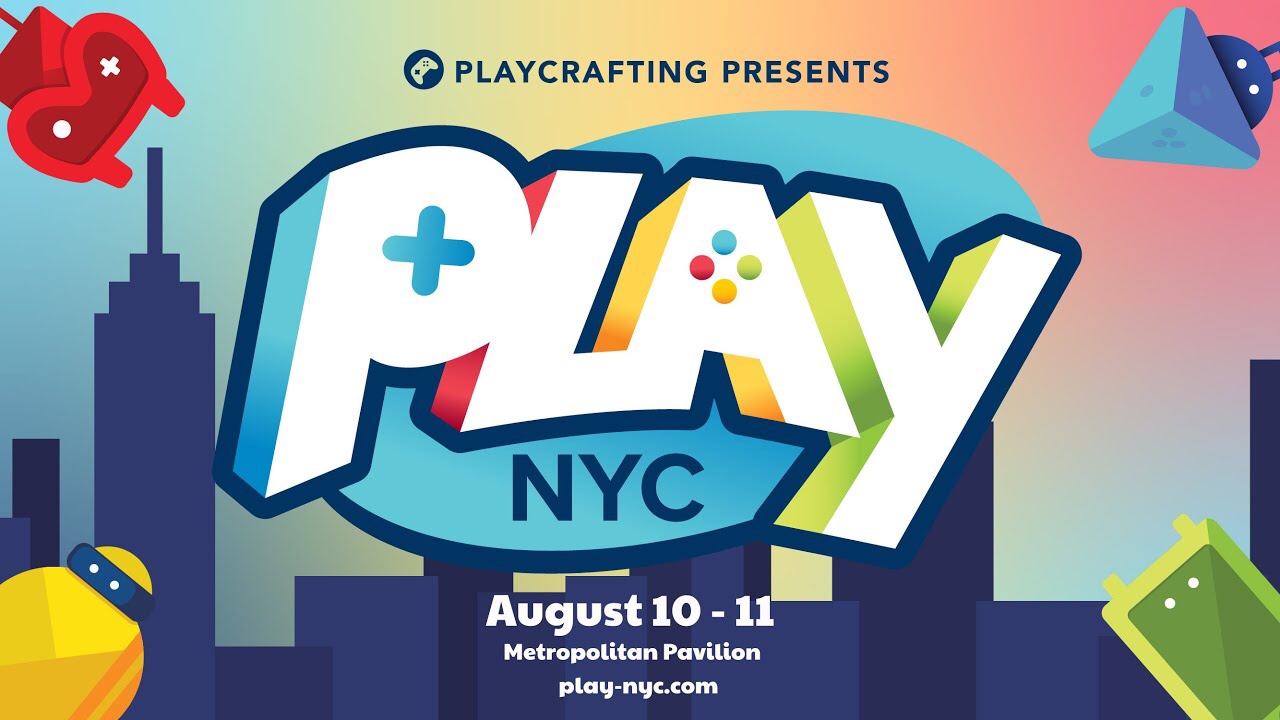 For the last few years, I’ve been going to Playcrafting’s summer games conference called Play NYC. Last year was pretty lacking on the mobile front so I didn’t cover it, but I wrote about my experience in 2017. This year had a pretty good turnout for mobile games, as well as games that seem like a great fit for the platform. I also checked out some PC games that looked interesting and watched others play a Switch couch co-op game because no one seemed to want to give up their controller. Overall, I had a great a time a played some solid games. Continue on to read about the highlights of the event for me.

Fourzy is a two-player competitive puzzle game that’s like a cross between Connect Four and Tic-Tac-Toe. The idea is to get four in a row, but unlike Connect Four, you can drop your pieces on any of the four sides of the board. There are many types of boards, some with sticky tiles, others with slippery ice, some with both. You can either play with a friend locally on the same device or get matched in the online multiplayer. And for those who just want to play on their own, there’s an AI to make that happen. The game will be free-to-play and they’re still working on how the monetization will work. I was surprised this is the first game from developer Mindisle, as it already feels super polished. I especially like the colorful art style and cute critters that you can choose from. Fourzy is planned for iOS and Android with no release date set yet. But you can sign up for the beta to get in on the action sooner.

Another mobile puzzle game that got my attention was Grobo, in which you play as a little futuristic robot who can manipulate gravity. It plays in portrait mode, so it’s great for one-handed play. The way it works is that you swipe in a direction to have Grobo dash over that way until he hits a wall. When he does hit that wall, his feet will stick to it. So this is how you change the direction he’s facing. You can also drag your finger along the screen to make him walk, but he can only walk along the platform he’s standing on. He can also fall off the edge of a platform, which is sometimes beneficial, but other times will get him killed. In each level, you need to get Grobo to the exit, avoiding hazards and picking up collectibles along the way. Each level also has a scoring system in which you earn stars based on the number of dashes you used. Overall, I really liked what I saw, and appreciated that the controls were entirely gesture-based, so there are no onscreen buttons to worry about. No release date is set yet, but you can subscribe to their newsletter to get updates direct from the developer. 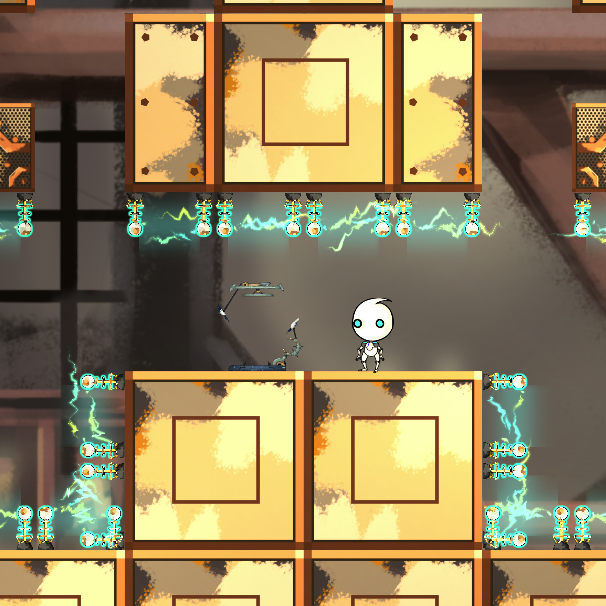 When I first entered the room, I spotted That Chicken Game and made a mental note to come back after I scoped out the rest of the floor. I could immediately tell it was a mobile game from the onscreen buttons showing on the monitor above. To be honest, it didn’t look like much at a glance, but I still wanted to give it a chance. What ensued was a lot of yelling at the screen after breaking tons of eggs. The premise of the game is that you’re a chicken rescuing an egg from a kitchen before it gets cooked. The controls are only left/right movement and a jump button. You start off with the egg cradled on your back and you have to somehow jump over plates and burners without the egg breaking. You have only five lives to do it in and then you restart back at the beginning. My skills vastly improved in the time I spent with it, and I was at least able to get to the first checkpoint pretty reliably. But I always messed up around there and got sent to the start. There’s a PC version available now, but developer Zach Chang of Curious Visions said it’s not as polished as the upcoming mobile version. I still had a blast with it and I think it would be fun to record video of it once it’s out on iOS. The plan is for it to be free, supported by ads, with an IAP to remove the ads. I also hope he considers my feedback to add an unlimited lives option so I actually have a chance of completing the game. You could also watch his speed run below, and I’ll be sure to let you know when the game is available to download on iOS.

Way of Rhea is a very chill and laid-back puzzle-platformer in which you need to change your robe’s color to open gates and use elevators. It’s currently being developed for PC and still has a long way to go, but developer Anthropic Studios said they’d like to bring it to other platforms if it does well. Since it’s not reflex-based, and there’s fancy movements to pull off, it seems like it would be a perfect fit for touchscreens. So I hope it might come to iOS one day. I played through the demo available and really enjoyed it. I didn’t get any video, but you can watch this short gameplay teaser the developer made below.

GRIS is actually coming to iOS this month, and I haven’t played the touchscreen version yet. But I did get to play through the PC demo using a controller and I love what I’ve seen so far. It can be a bit demanding, as there are some platforming sections right from the start that require precise timing. But even when I was struggling, the game is so gorgeous that I kept pushing through. It also helps that failing, at least the part I played, just means starting the platforming sequence over. There’s no fighting, no death, no starting the game from scratch. You do face giant birds that try to blow you across the screen, and that’s where your ability to turn into a heavy cube comes into play. A few sections proved difficult for me, but I was able to get to the end of the demo. Hopefully the touchscreen controls can be done in a way that won’t make the game even harder. But we’ll get to find out soon enough. I’m excepted to be able to have such a gorgeous game like this in my pocket. I didn’t take video, but if you don’t know what GRIS is, check out the trailer below.

I didn’t actually get to play Devolver Digital’s Heave Ho, as people were reluctant to give up their controllers. But I still enjoyed watching others play. It’s a couch co-op game for up to four people, in which everyone needs to get to the goal in order to pass the level. What makes the game so much fun to watch is that each person controls a quirky characters that’s basically just a head with two long arms. They have to use these long arms to climb around, swing across gaps, and even throw other players. Falling kills you, but you just respawn immediately and try again. If I had local friends who play video games, I’d definitely play it with them. It looks like a blast. It will be available on Steam and Switch August 29th, so check it out if you have people to play with.

Just spent a good chunk of my time watching other people play @devolverdigitalΓò¼├┤Γö£├ºΓö£├╗s Heave Ho at #PlayNYC. Looks like a blast if you have friends to play with. pic.twitter.com/STwYZAElci

Neil Sveri’s Rats, Roaches and Roombas is a competitive cleaning game available for free on itch.io. Each player controls a roomba and you have to try to pick up the most popcorn, roaches and rats. The rats are worth the most points but they’re also super fast. I found the controls a little wonky, as I kept turning in the opposite direction I wanted to. But it was still a lot of fun. I also learned on one of my later games that you can run into the other roomba and make it lose some of its popcorn! That made it feel almost like a round of battle bots. If you have a PC, you can play the game right now.

And this last one isn’t on mobile either, but I had a surprisingly good time just running around Ancient Egypt annoying the locals. You can climb up to the tippy top of the pyramids and then slide down. You can ride a horse to cover larger distances, though I sadly got my trusty steed stuck in the water in a very sad Artax situation. I just wanted to see if he could swim and now he’ll most surely die due to my carelessness. But I did find a very nice boat after, so at least I was stuck on foot again. It’s nice to see something like Assassin’s Creed adapted into a stress-free experience that’s all about exploration. I’m still sad about my poor horse, but I could see playing more games like this. 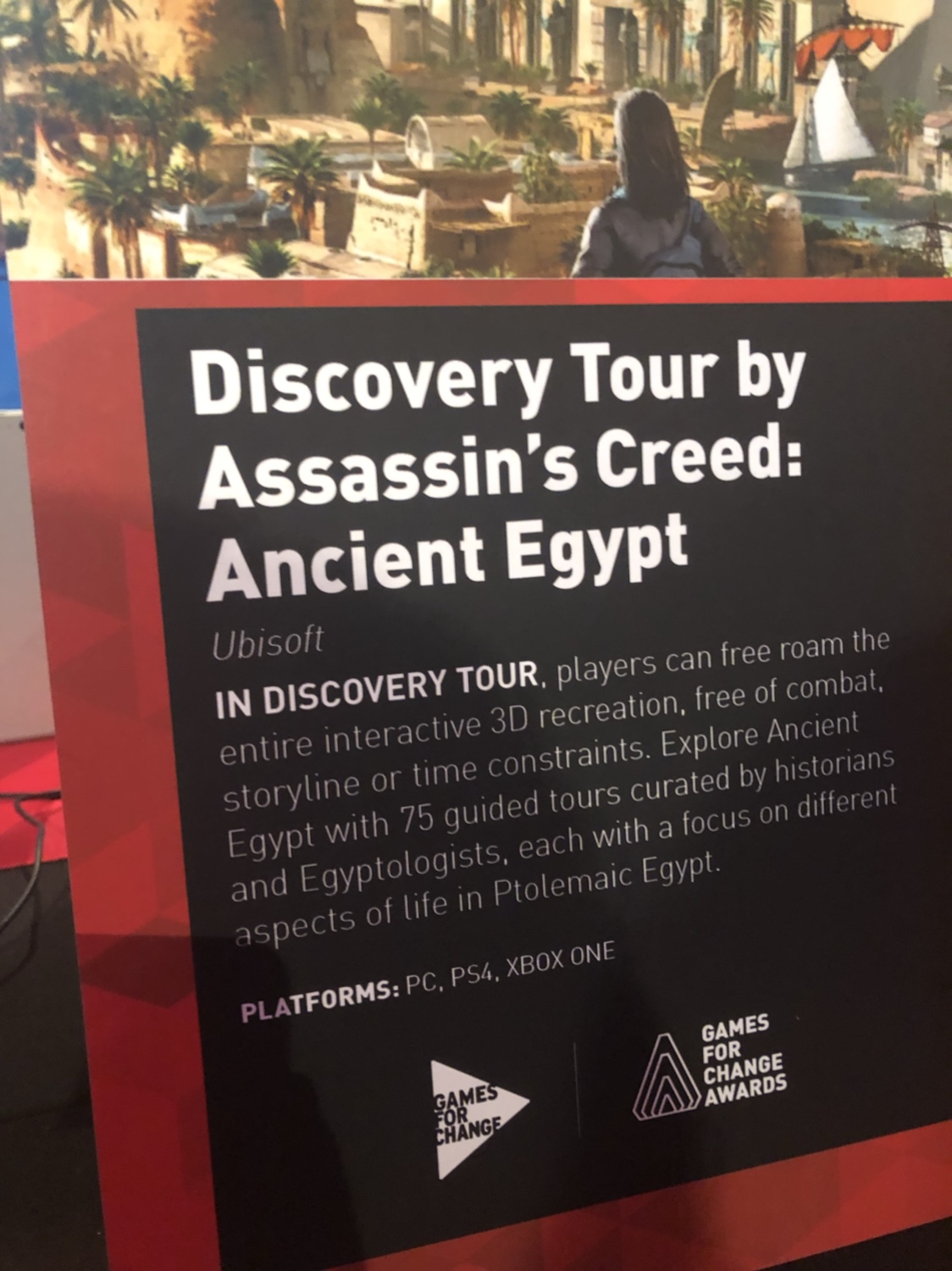 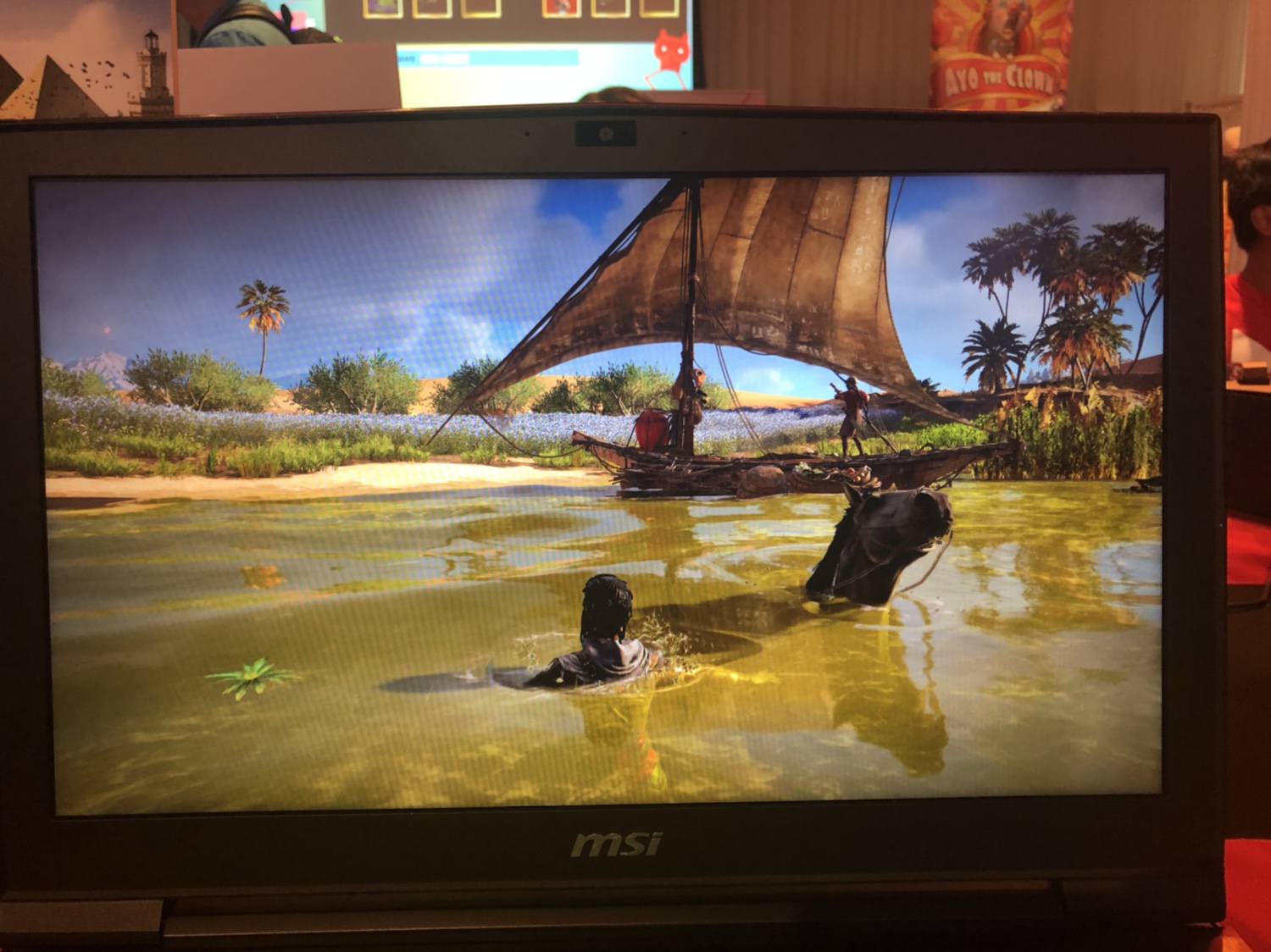 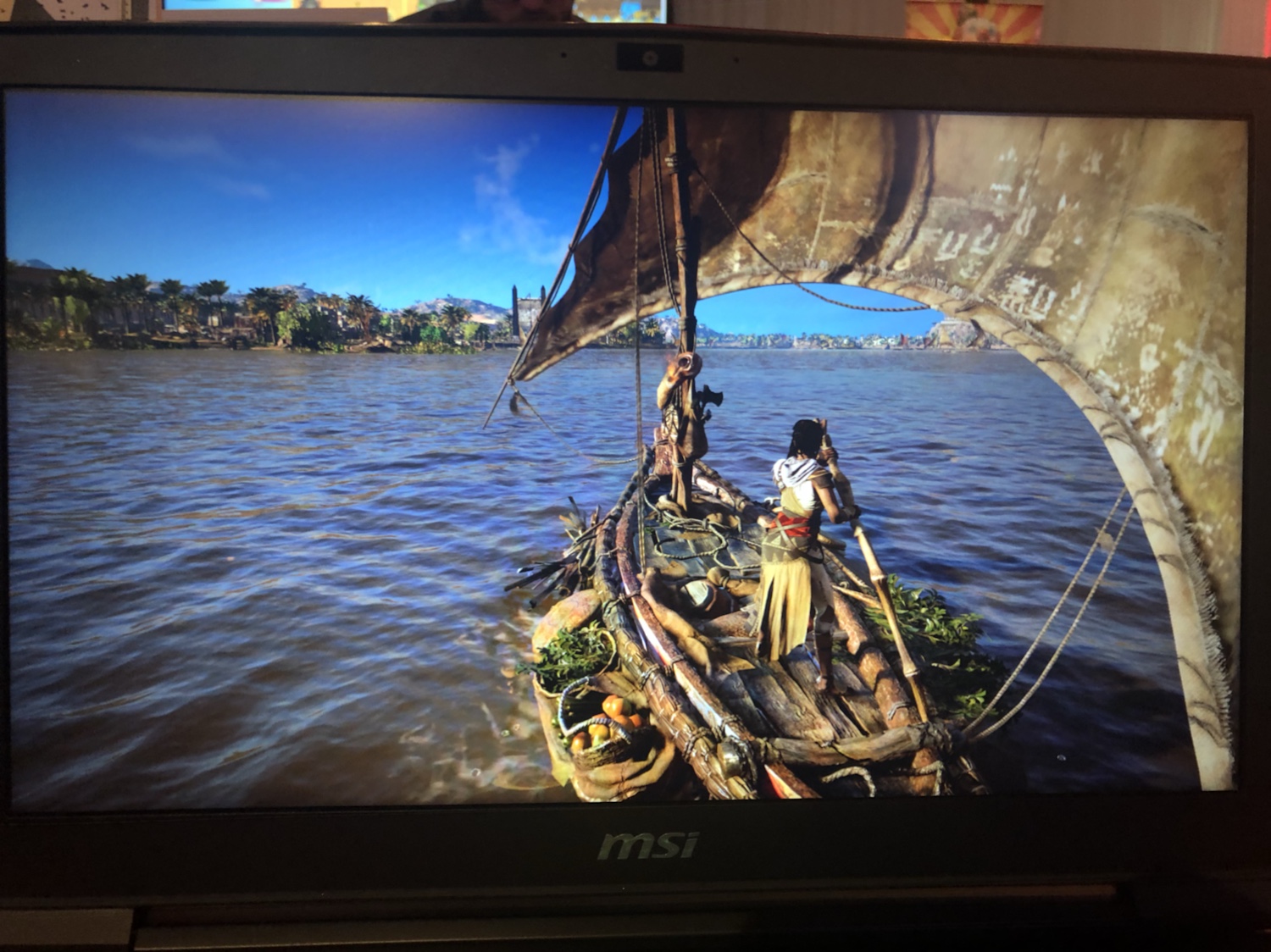 And those were my highlights from Play NYC 2019. I enjoyed myself more than last year and am hopeful that next year will be even bigger and better. I’ll make sure to keep you updated on any news about the upcoming mobile games. And don’t forget to join the Fourzy beta if you can’t wait!