There were a lot of iOS releases this week, and several that I had ahead of time. But only one grabbed me from the very start and never let go. Thanks to a rich narrative and breathtaking hand-painted visuals, South Gale’s superbly written RPG, Terafyn, was easy to get pulled into and hard to put down. Since the game is episodic, it means many questions are left unanswered, but the first episode whet my appetite and left me eager for more.

In Terafyn, you start off in a quiet fishing village named Brittlemire, where you live with your father, Betyn, and repeatedly get into trouble with your friend Devlin. The local apothecary asks you to find some herbs for her, and so begins your first quest as an adventurer. Your father teaches you how to use a weapon and you head off together into the forest, where a strange encounter leaves you all uneasy. What follows is a mystery that takes you all over the world of Terafyn, solving riddles, arm wrestling rowdy bar patrons, uncovering hidden passages, and of course battling fantastical beasts. For me, the battles were the least interesting part of the game, but I like everything else so much that I endured them rather than lose out on the entire experience. 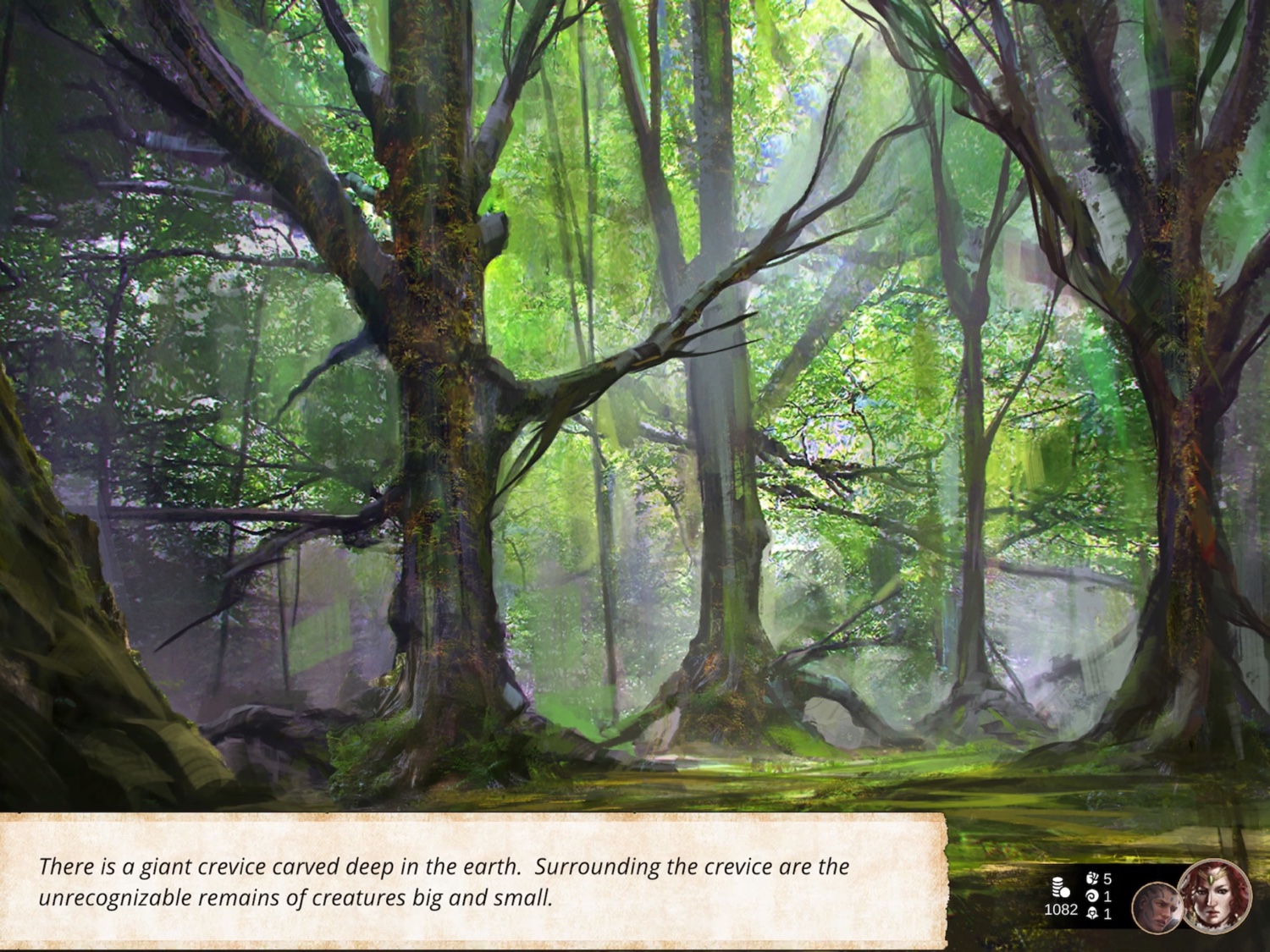 While the artwork is certainly a big draw for me here — as well as the music and atmospheric sound design — the writing is, without a doubt, what kept me coming back for more. The entire game is simply text over static painted environments, but I hung onto every word and could picture the action in my head. This is not something that comes easy for me these days, what with my iPhone absolutely destroying my ability to focus on a book. Further, I can’t even recall the last time an RPG’s writing caught my attention. In fact, it’s been so long since any fantasy game or book did much of anything for me. I used to devour the Dragonlance Chronicles books as a teen, but these days I find my eyes just gloss over reading any fantasy stories and I bounce off them fast. I stopped expecting anything from them and even ignore most. So I’m especially amazed that an RPG is what pulled me back into that kind of world. 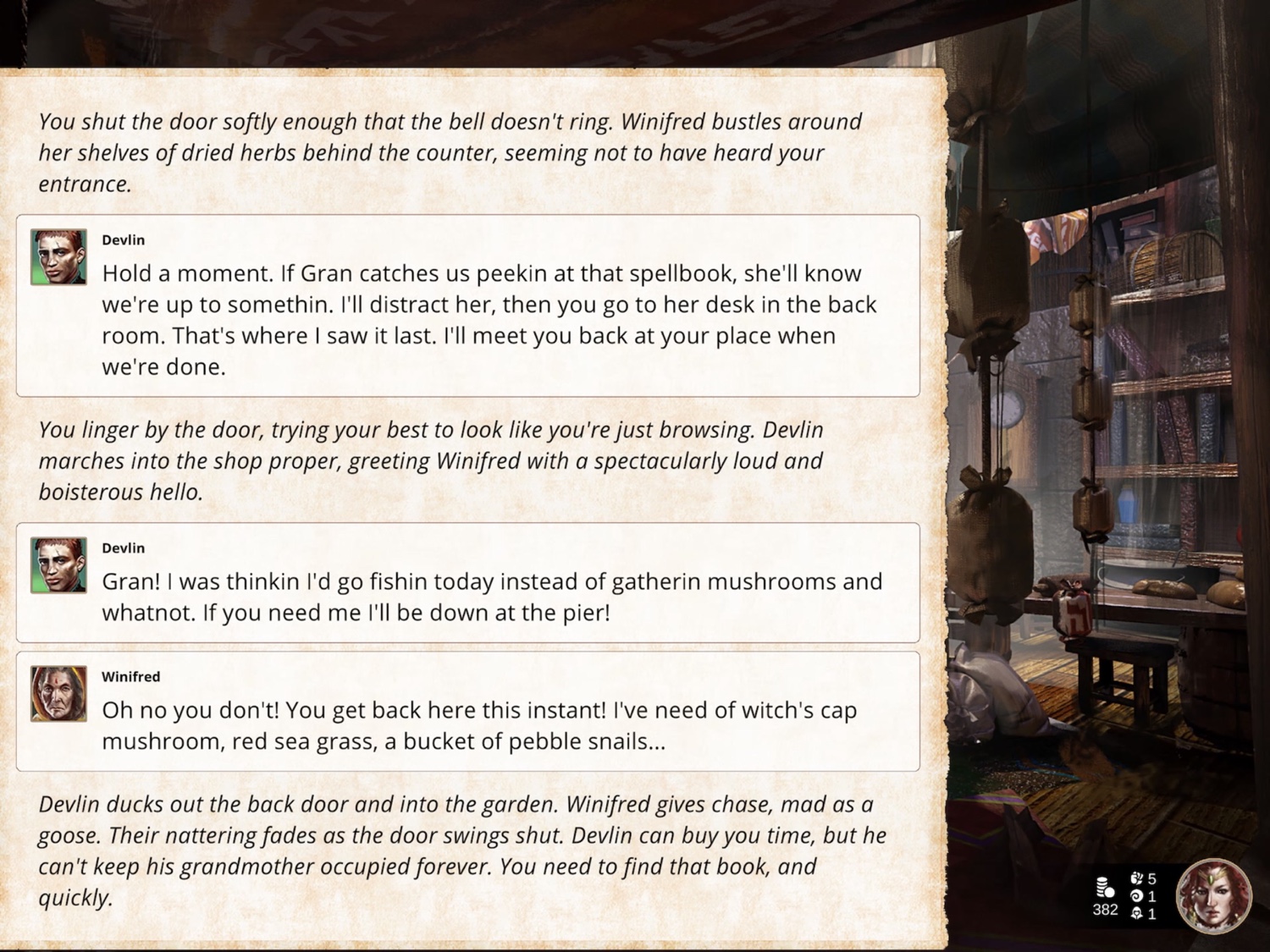 It’s all in the little details. Every small encounter in Terafyn is so full of life. Take Devlin’s interaction with his sister, who’s a bit rough with him. They’re snarky with each other, but you know they’d have each others’ backs in an instant. The light-hearted quips weave seamlessly with the tense encounters with god-like beings or heartfelt moments between father and daughter. Each character has a well-rounded and believable personality, with speech patterns that make them stand out from each other. While in many other games I’m eager to get through the dialogue to get to the action, here I savored every word. Unlike so many other RPGs, there wasn’t a single moment where I rolled my eyes or groaned at the writing. While this was only the first episode, it says a lot that the writing can hold up from start to finish. 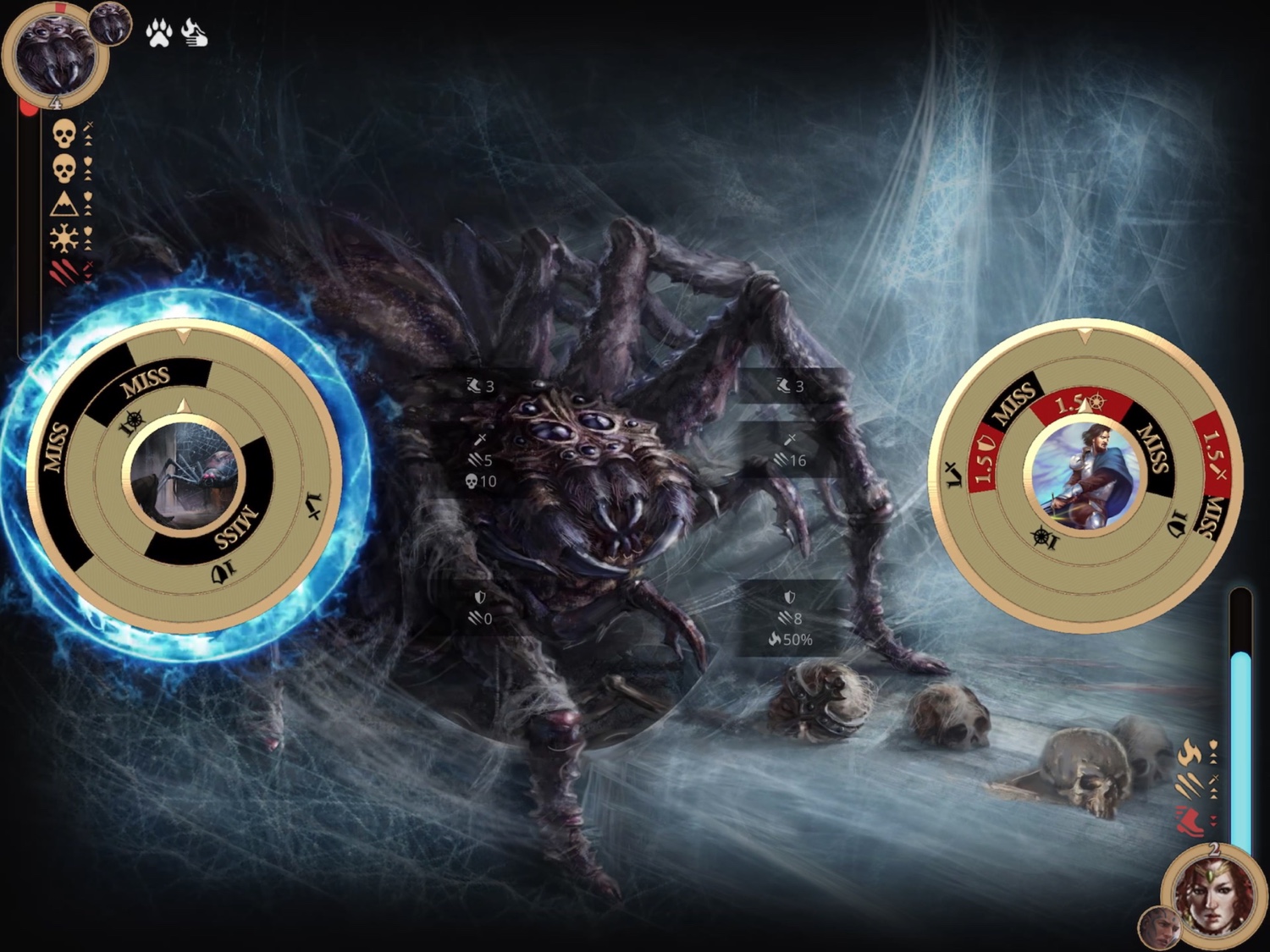 Now, this is still an RPG, not a text adventure. So let’s talk about the RPG elements. Unlike most, you can’t grind for experience here when things get tough. You don’t even earn experience from battles. Instead, there are special events that each give you a stat point, which you choose where to invest. There are three stats you can focus on in this game — Might, Ruse and Arcane. As you can imagine, Might is the brute strength of a melee fighter. Ruse is for rogues or archers, and Arcane is what you need if you want to train in the mysterious magic arts. As you explore the world, you’ll have encounters that allow you to perform certain actions based on your stats. For instance, if you have enough points in Ruse, you can try stealing a satchel from one of the bar patrons. If you have more Arcane points, you can identify a magic book you need instead of guessing from a pile of possibilities. While it doesn’t make sense to spread your points between different stats, you can equip a companion as an ally, which will add their stats to yours and give you more flexibility both in these small events and enemy encounters. 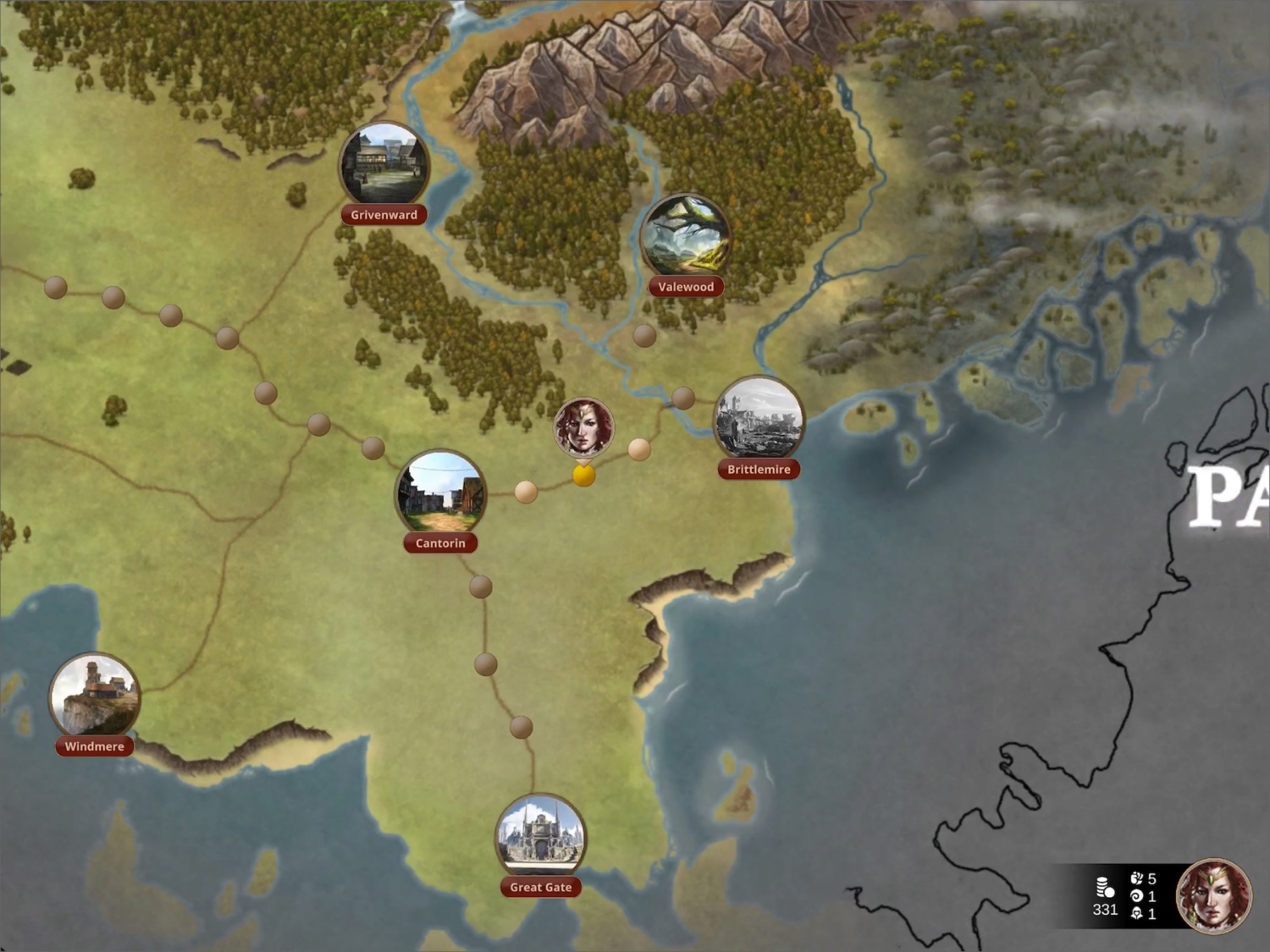 Now, let’s talk about those battles, since you’ll spend a good chunk of the game with them. This is a deck-building game, so you’ll start off with some basic cards based on the training you chose. You can loot better cards or buy them from merchants you come across on your travels. But it’s up to you to determine which cards to add to your deck and which ally to take with you into battle. You can hold up to twelve rune cards that have unlimited use and four consumables that are gone once you use them. A rune card might be a Short Bow that always does 7 extra damage, as long as the card doesn’t fail — which might happen if you try to use a card that you don’t have enough stat points for. A consumable would be a health potion or elemental rune, and those don’t use up a turn in battle. 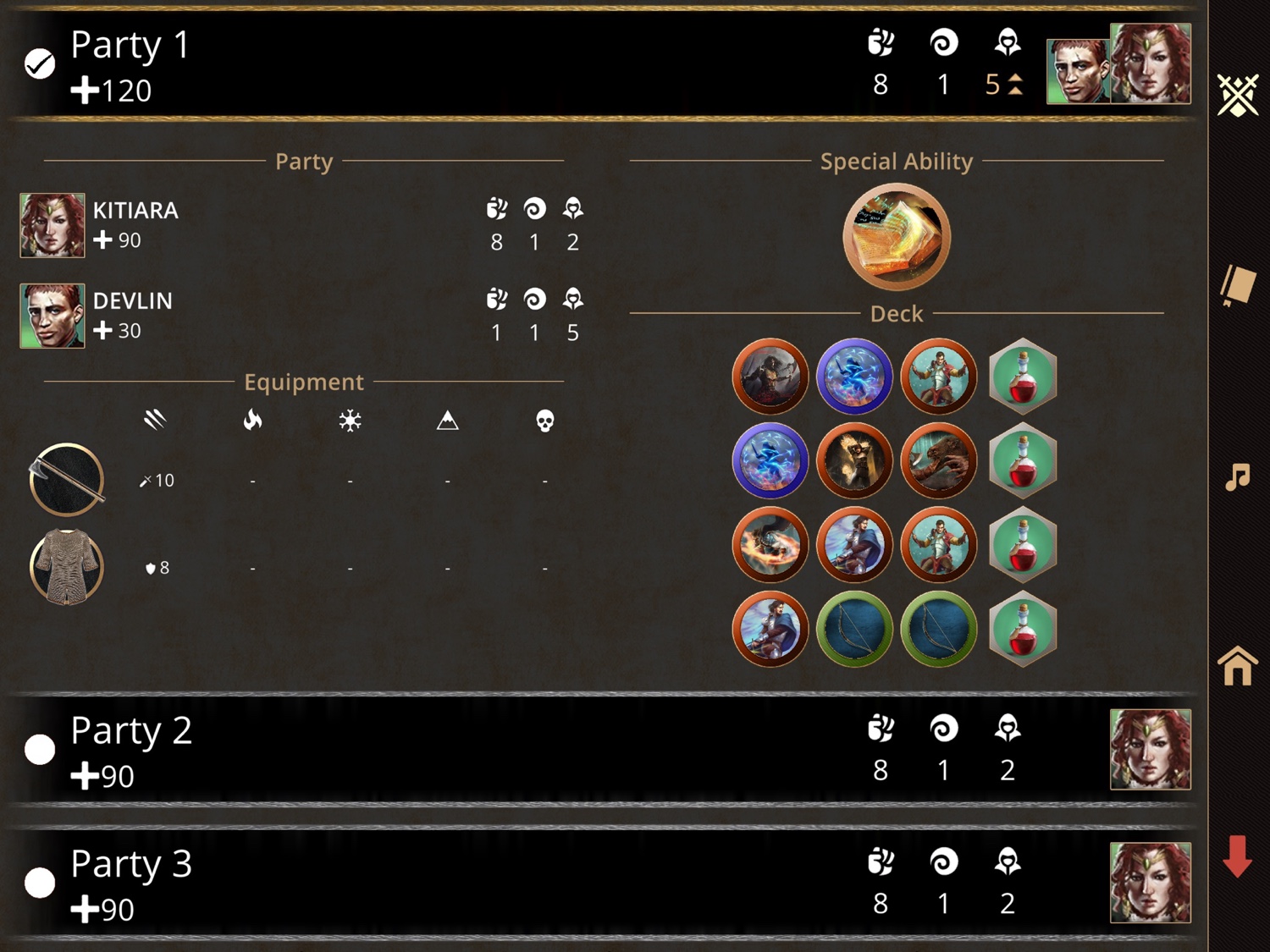 Once in battle, you and your opponent each get to choose between three random cards from your deck to play. Then you’ll each spin a roulette wheel, which automatically lands on the Attack, Defense, and Special rings. If it lands in the white zone, you attack or defend for the amount expected, and your Special gauge fills up a bit. But if it hits the red zone, you attack or defend for 1.5x the normal amount, or fill your Special gauge 50% more than expected. Now, here’s the part that can really ruin your day. If any of the rings land on the black area, you miss completely. That means either you don’t do any damage with your attack, you have zero defense, or your Special gauge doesn’t fill up at all. This can be devastating, especially against a tough enemy. There are cards that can minimize the chance of a miss and tip the scales in your favor, but there is always an element of luck to the battles. 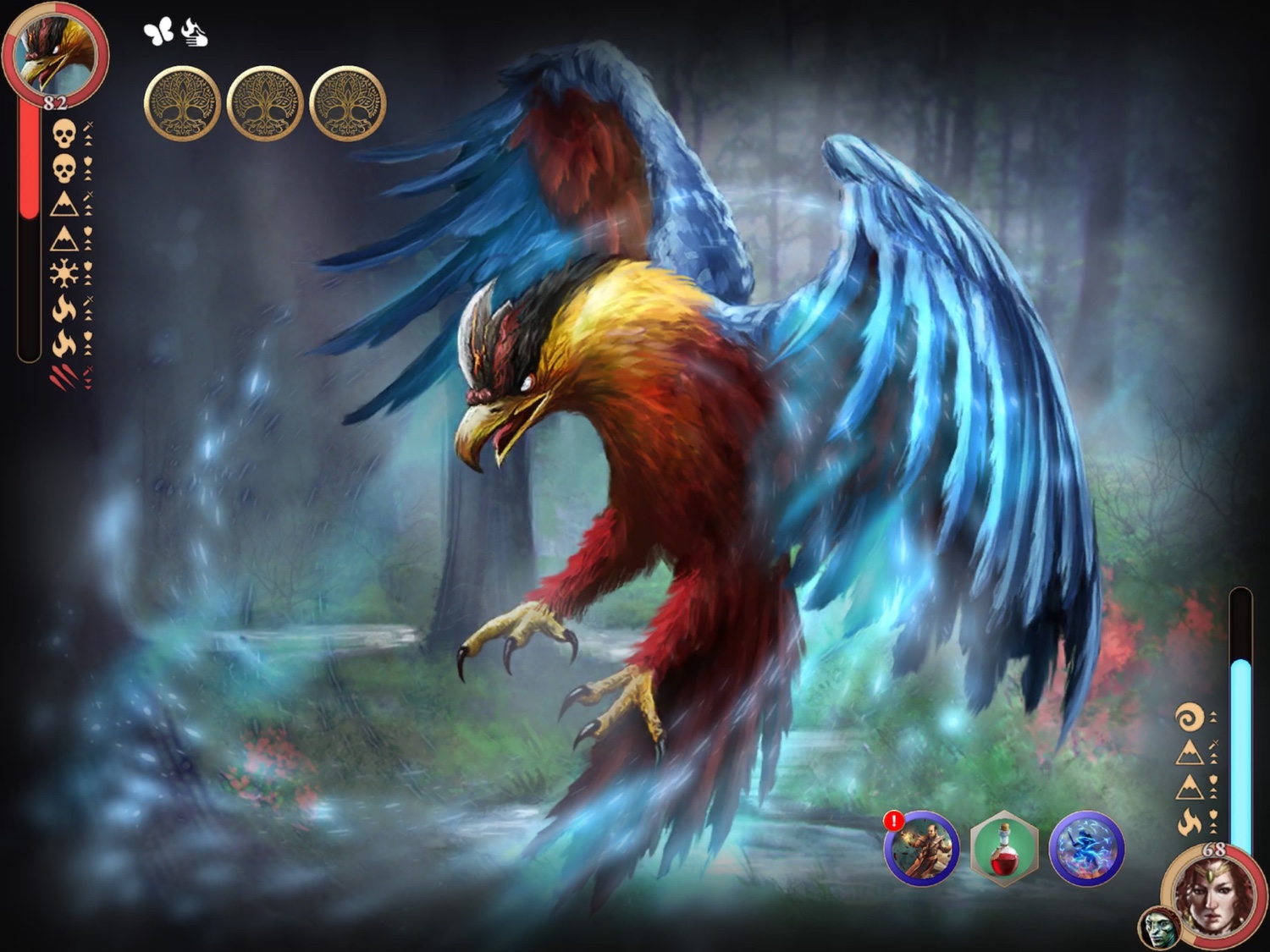 The Special gauge I was referring to is a meter that fills up and then allows you to use a special skill that’s more powerful than any other cards in the game. It also gives you more control over the outcome. Instead of the spinner automatically stopping on its own, you choose when it stops for each ring — Attack, Defend, and Special. If your Critical Hit zones are small, it takes strong reflexes and perfect timing to stop them at the right moment. But if you manage to make those areas bigger through cards or other equipment — such as armor and weapons — you can almost guarantee that you’ll hit all three red zones with your Special. So again, there is luck involved, but you’re not always at Lady Luck’s mercy. 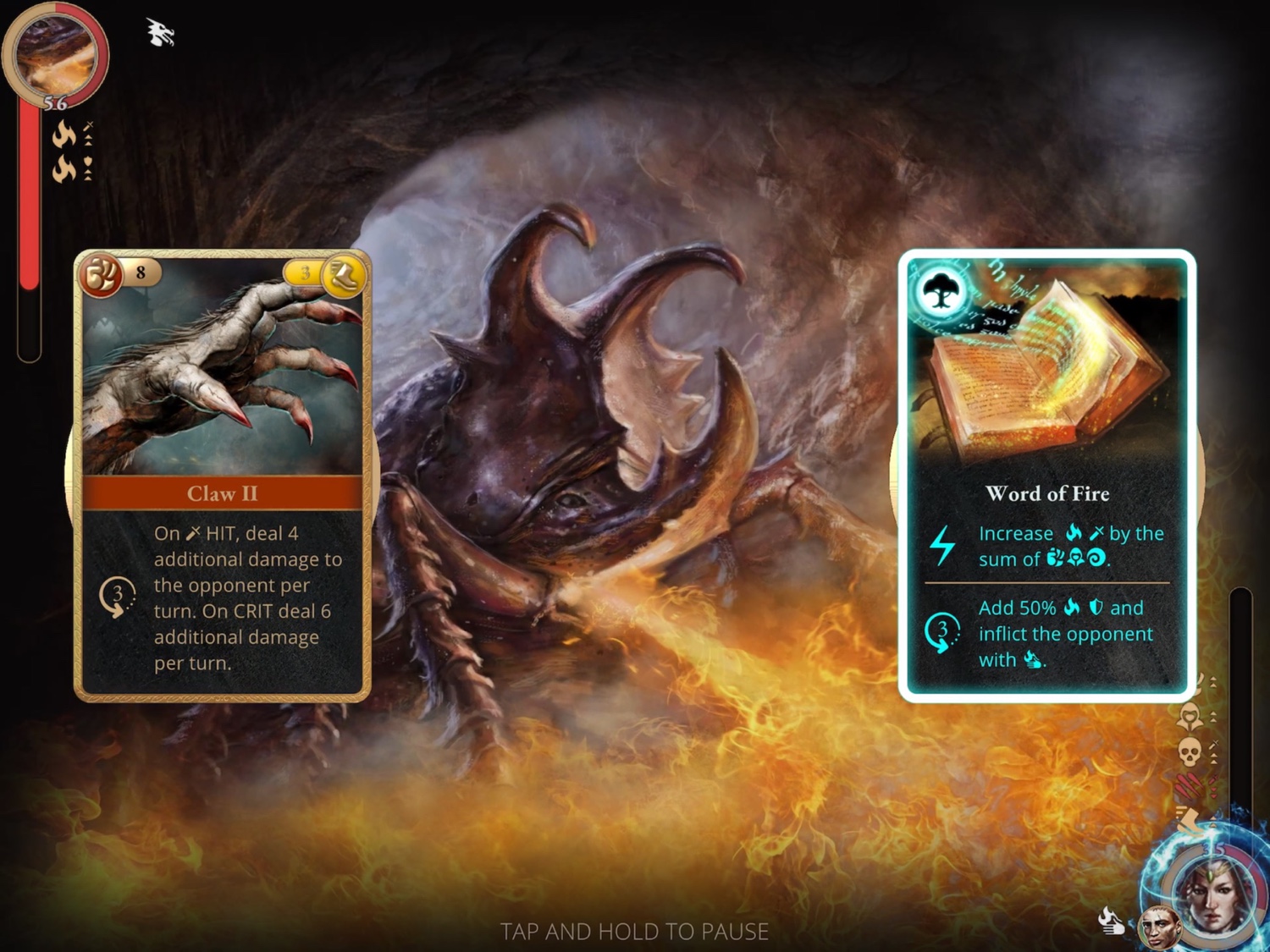 Like I said earlier, the battles were the weakest link for me. They’re interesting enough, and I’m sure deck-building fans will have fun messing around with different decks and finding the truly powerful builds. But I just wanted to see more of the story and found the battles slowed me down. If they were easy random encounters, I could use them to earn extra gold for gear and cards. But they weren’t exciting, because I was rarely at risk of losing — and even if I did, there are no consequences from it. Event battles, on the other hand, were often much harder and forced me to reconfigure my deck. This is where the battles should get interesting. But testing out new builds isn’t so easy. If you don’t have enough gold for the cards you want to try, you have to grind for them. It’s also hard to tell from a card’s stats and description how well it will hold up in a specific battle and fit into your overall deck. Grinding out weak enemies to earn gold for more cards to try out against stronger enemies can make the game drag on. 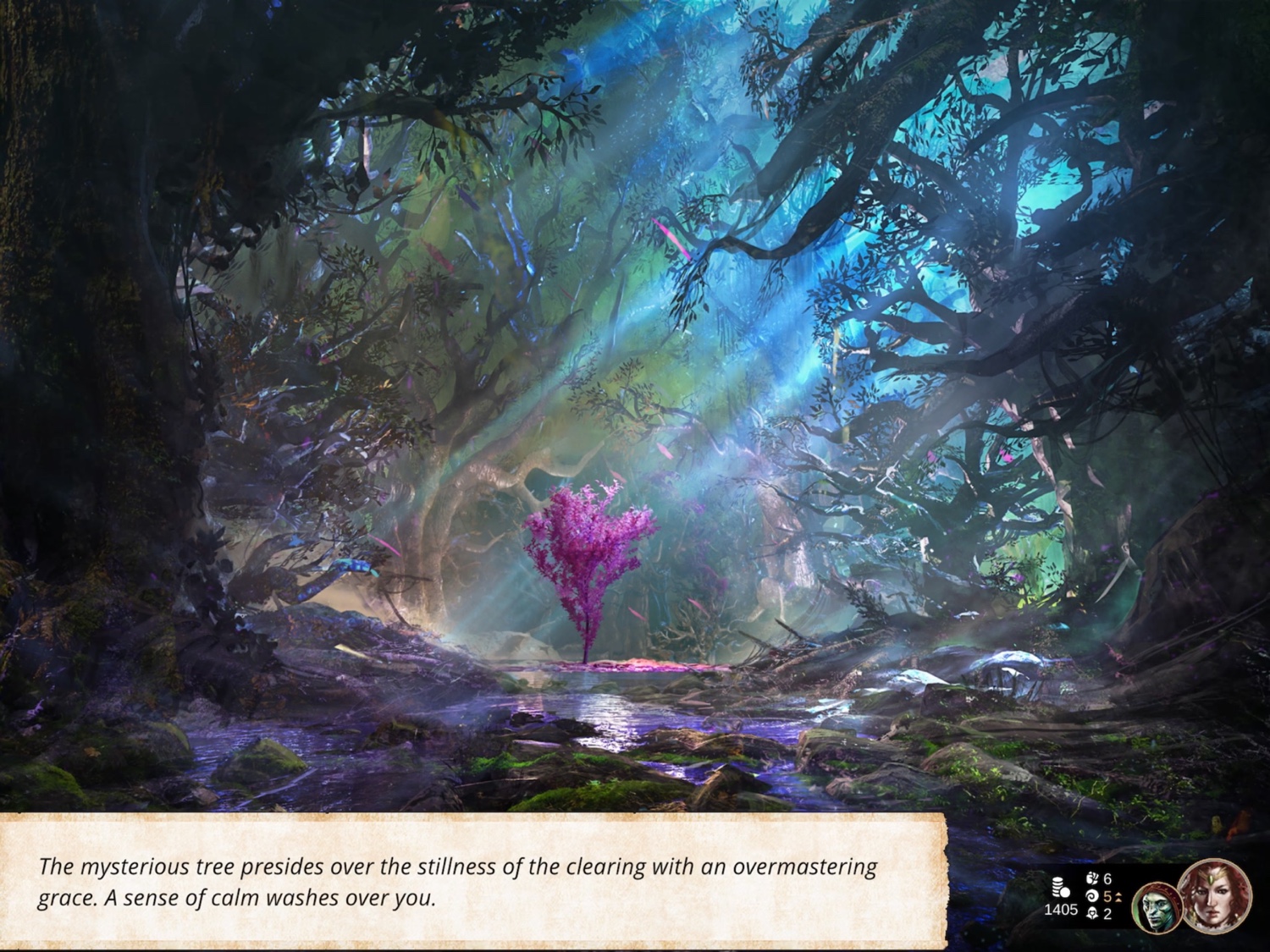 I also had a very specific issue where I didn’t notice the tabs in the different shops, so I never realized I could buy new weapons and armor from merchants. The tabs are very small on an iPad and don’t stand out enough from the background, so I didn’t even realize they were there until I was in the final area of the first episode and couldn’t leave to get other gear. I was stuck with what was available in the shop there, and most of the equipment required more points than I had yet. I believe the developers are doing something to fix this in an update — hopefully enlarging those tabs and allowing the player to leave the final area if they’re not ready for that enemy yet. I did finally manage to win that battle, thanks to some deck-building advice from the developer, but it meant abandoning all my Might cards, despite that being my focus. I think this is a big oversight, but not something that can’t be fixed. 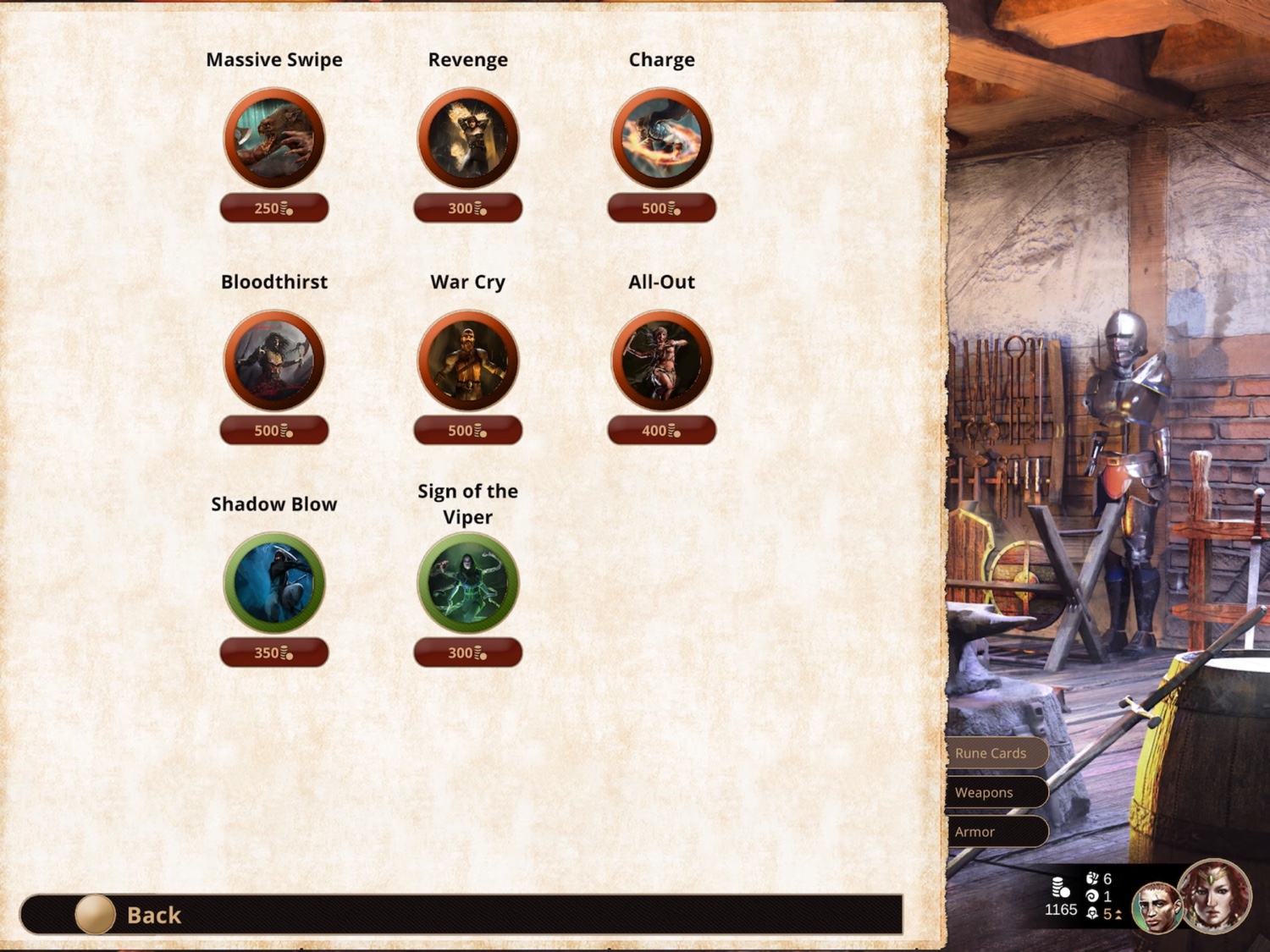 Another complaint is that I wish the quests were a bit clearer sometimes on where I was supposed to go. I wasted a lot of time on one that asked me to “search the countryside for stone horns,” which I took to mean an item that I would find on the ground or with some character. It turned out to be a place, and since there were several locations I hadn’t visited yet, I ended up visiting them all before finding the right one. During that time, I had a lot of random encounters with creatures that wore down my enjoyment of the battles. The narrative and artwork are the main appeal for me, so I was frustrated anytime my progress slowed due to an unclear goal.

Part of me also wishes there was an easy mode or story mode that would allow me to progress through the story without worrying about the deck-building aspect and the battles. But at the same time, I enjoyed the game so much that I want to start over and try a different stat to focus on. I haven’t decided which one yet, but there seems to be a decent amount of replay value if you want to mess around with that while waiting for the next episode. 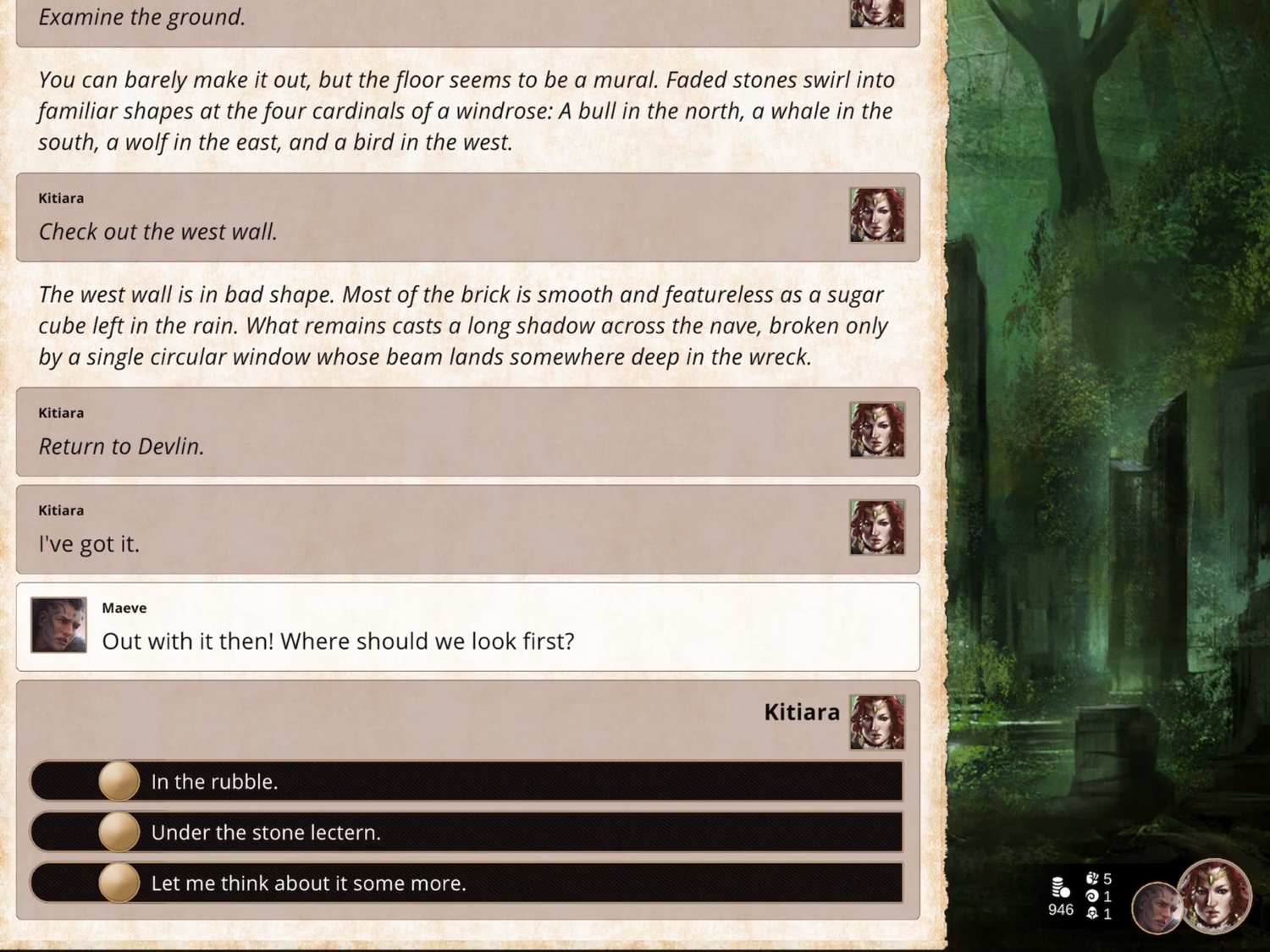 Terafyn is a rare fantasy RPG in that its writing managed to hold my attention from beginning to end without even using any voiceovers. Even though this is only the first chapter, it should last several hours, and costs just $1.99. If you’re even the slightest bit curious, at least play through the free prologue. Any complaints I have weren’t enough to keep me from seeing the game through to its current end. And the developers have already heard some of my feedback and are working it into the game, so it should only get better. I do hope it sees the success it deserves and we get to find out how the story plays out. I’m desperate to learn more about the world of Terafyn and its inhabitants. So don’t snooze on this one. Grab the game here and get immersed in its rich world-building and gorgeous visuals.

And if you need help, I have a walkthrough guide here with some helpful tips and tricks.