One of the trickiest puzzle types added to Genshin Impact in the 2.1 update involves a grid of eight cubes in nine slot that can be rotated. Some hints are given how to solve them, but they can still be difficult to decipher. So this guide will both explain how to solve them and show you the solutions if you don’t want to work it out yourself. Feel free to ask for extra help in the comments section.

First off, you can find the puzzles on Watatsumi Island in Inazuma. I’ve marked the location on the map below. 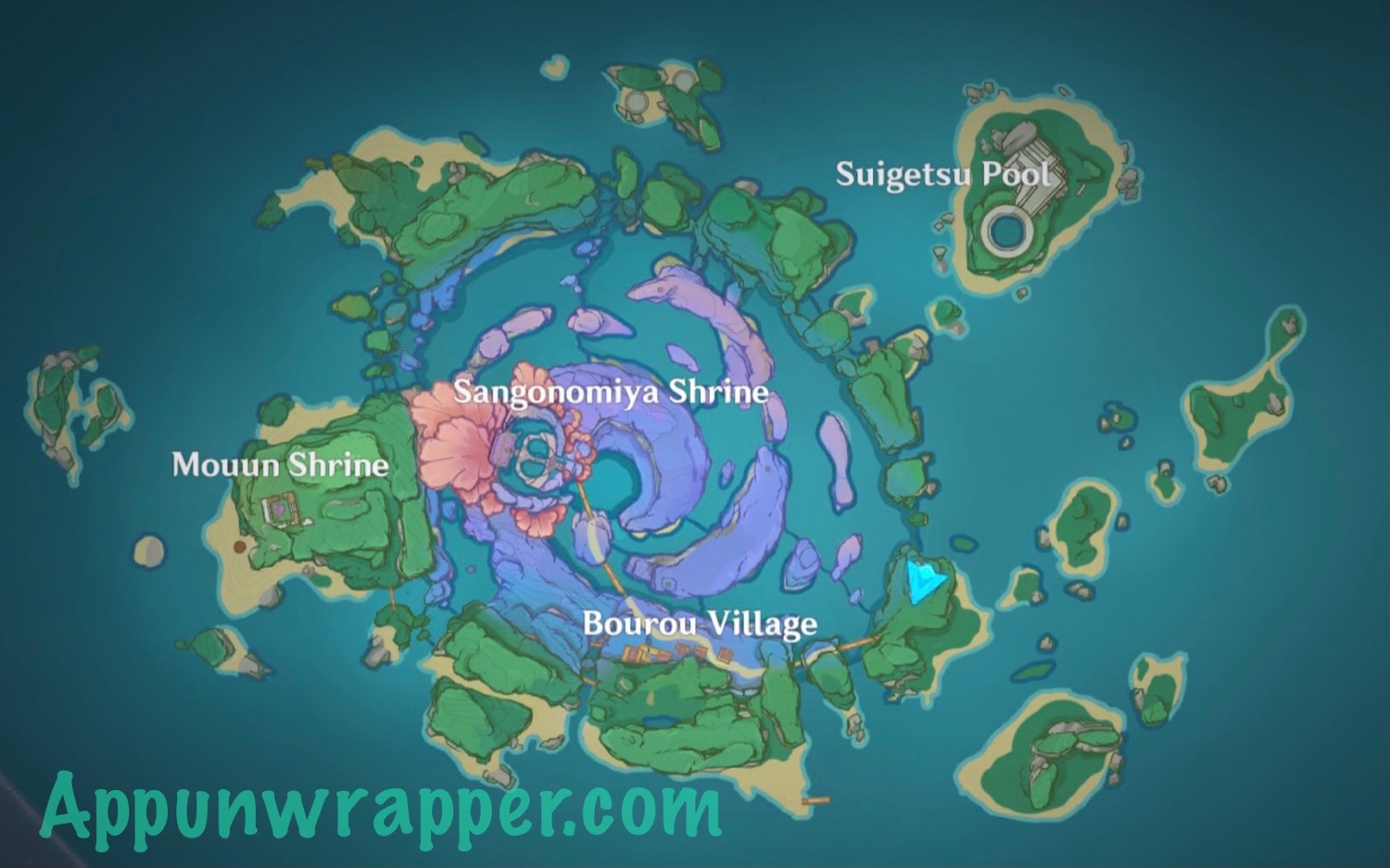 Once there, “Investigate” the open book nearby. 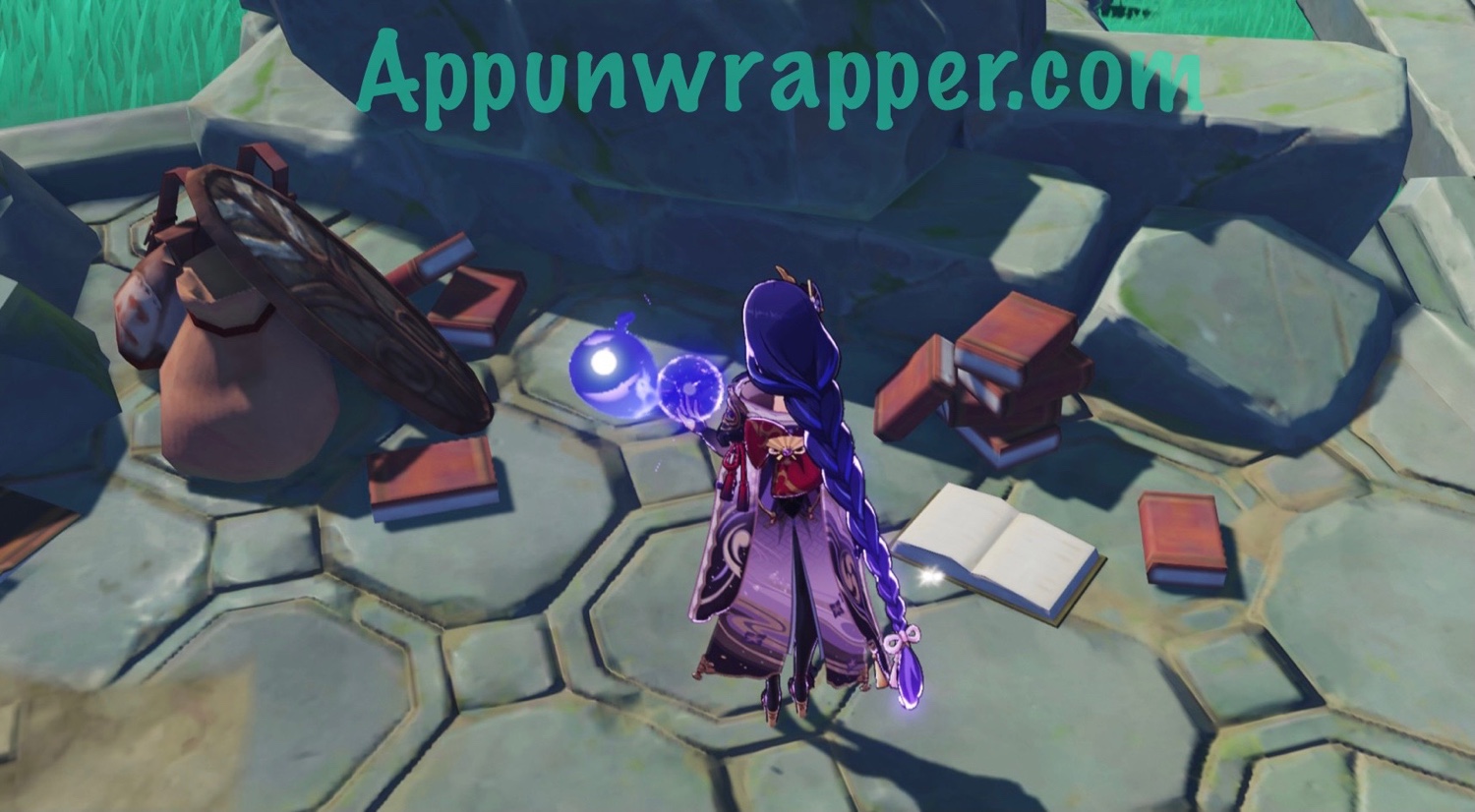 Here’s what it says. I’ve highlighted the most important bits:

“This is a very interesting Ruin machine indeed. I shall assign a number to each of these cubes’ positions. One shall be north, East shall be two. South three, and West, four. Adding on another four for those cubes with floating stone slates on them gives us five through eight. The sole empty position shall be nine, thus making up our nine-slotted puzzle. The lights on the stones don’t seem to mean much. In that case. Now, let’s try to make the sum of the numbers along the horizontal, vertical, and diagonal lines the same. And eureka, I’ve solved it! Well, that’s another entry for my thesis. I should continue west and see if there are any other ruins.”

So here’s what that means. The puzzle is made up of a 3×3 grid, nine slots total. There are eight cubes and one empty spot. There are also two different kinds of cubes — plain ones and those with little hats on top. The plain ones can be set to numbers 1 – 4, while the hatted/slated ones can be set to numbers 5 – 8. The empty slot always represents 9.

This is a plain cube:

And this is a hatted cube: 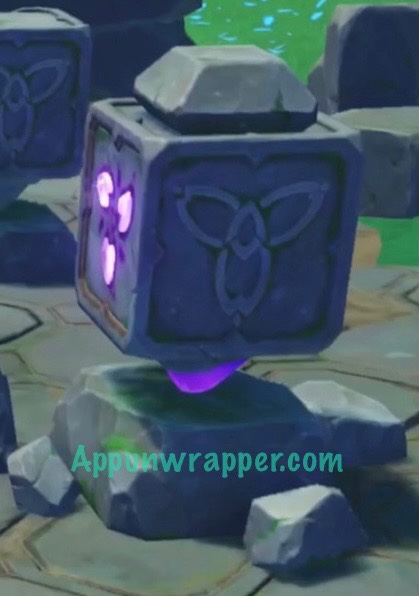 All the numbers are represented by directions. Four directions for each cube — North, East, South, West. You change the direction of the lit side by hitting the cube with your weapon. If it doesn’t move, that means that cube and number are set and can’t be changed. That makes your life a little easier!

So for the plain cubes, you set them this way:

For the hatted cubes:

Use your mini map to help you figure out the directions. The notebook is also in the Southeast corner.

And remember, the empty space is 9.

The goal for each puzzle is to make each horizontal, vertical, and diagonal row add up to the same number. It’s kind of like Sudoku. The game doesn’t tell you that number, but you can work it out to be 15.

So for the first puzzle, set the cubes like so: 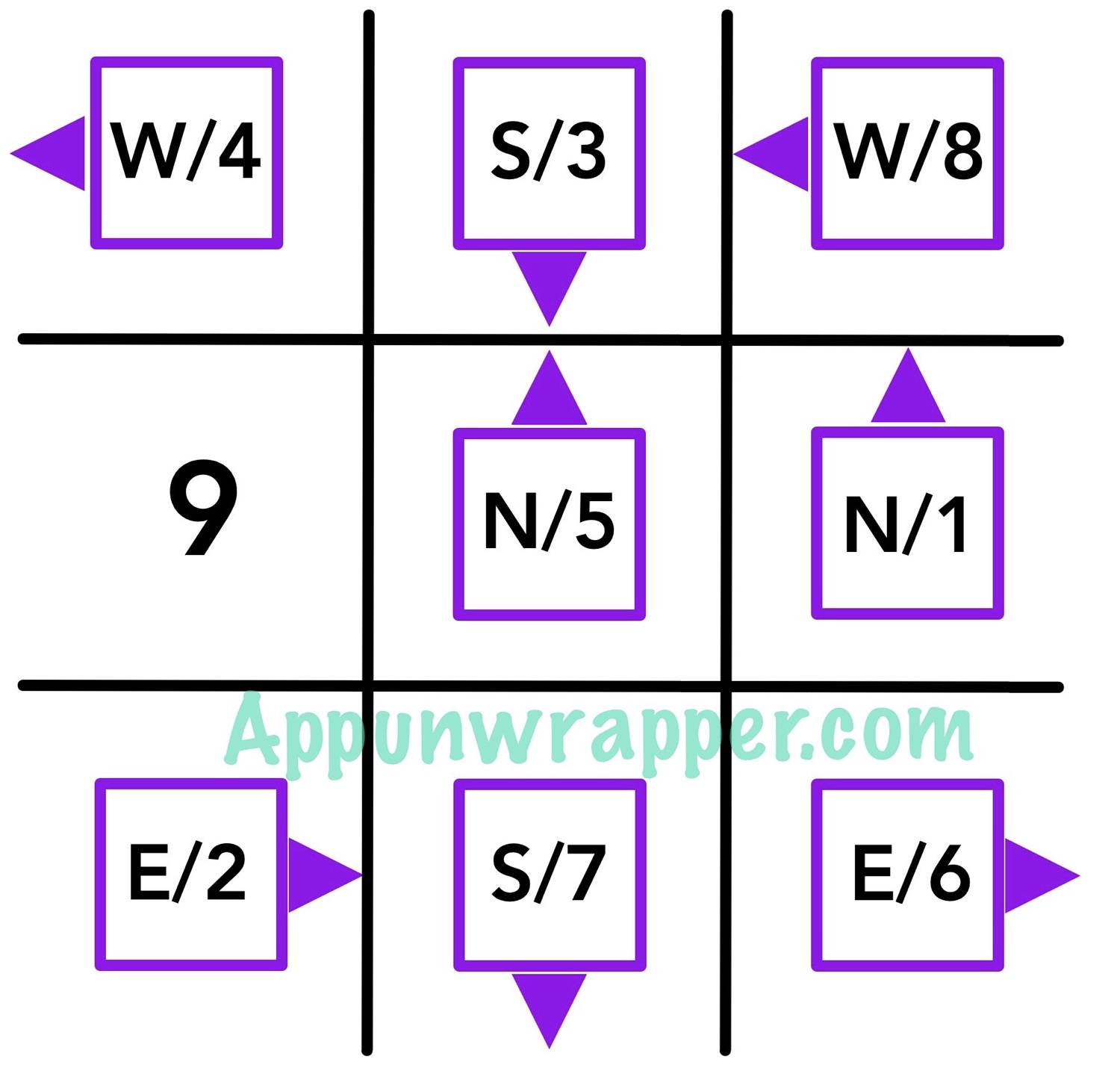 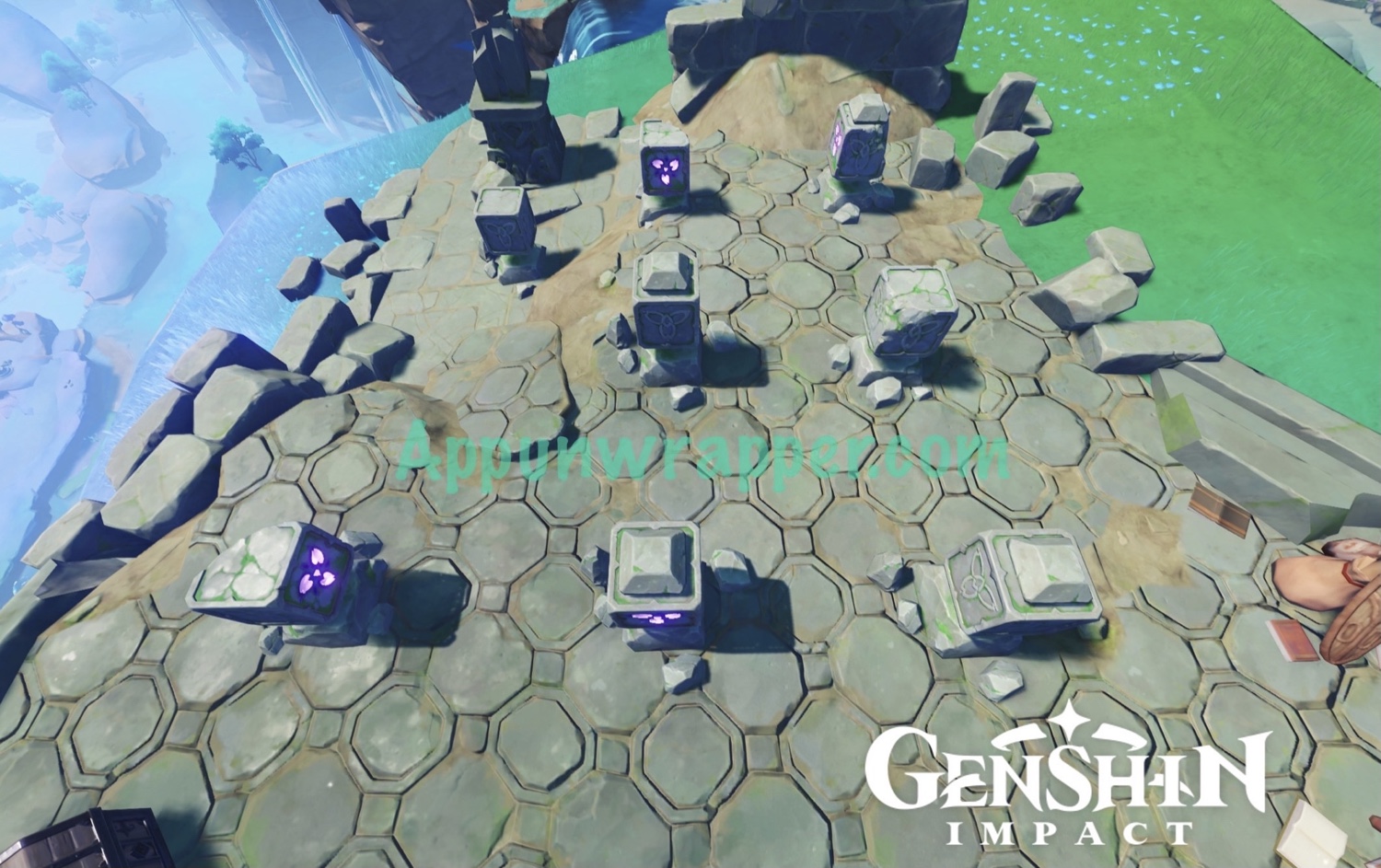 Teleport out of the area after solving it and then come back. Paimon should mention that the cubes changed, meaning you can now solve the second puzzle. For the second puzzle, set them like this: 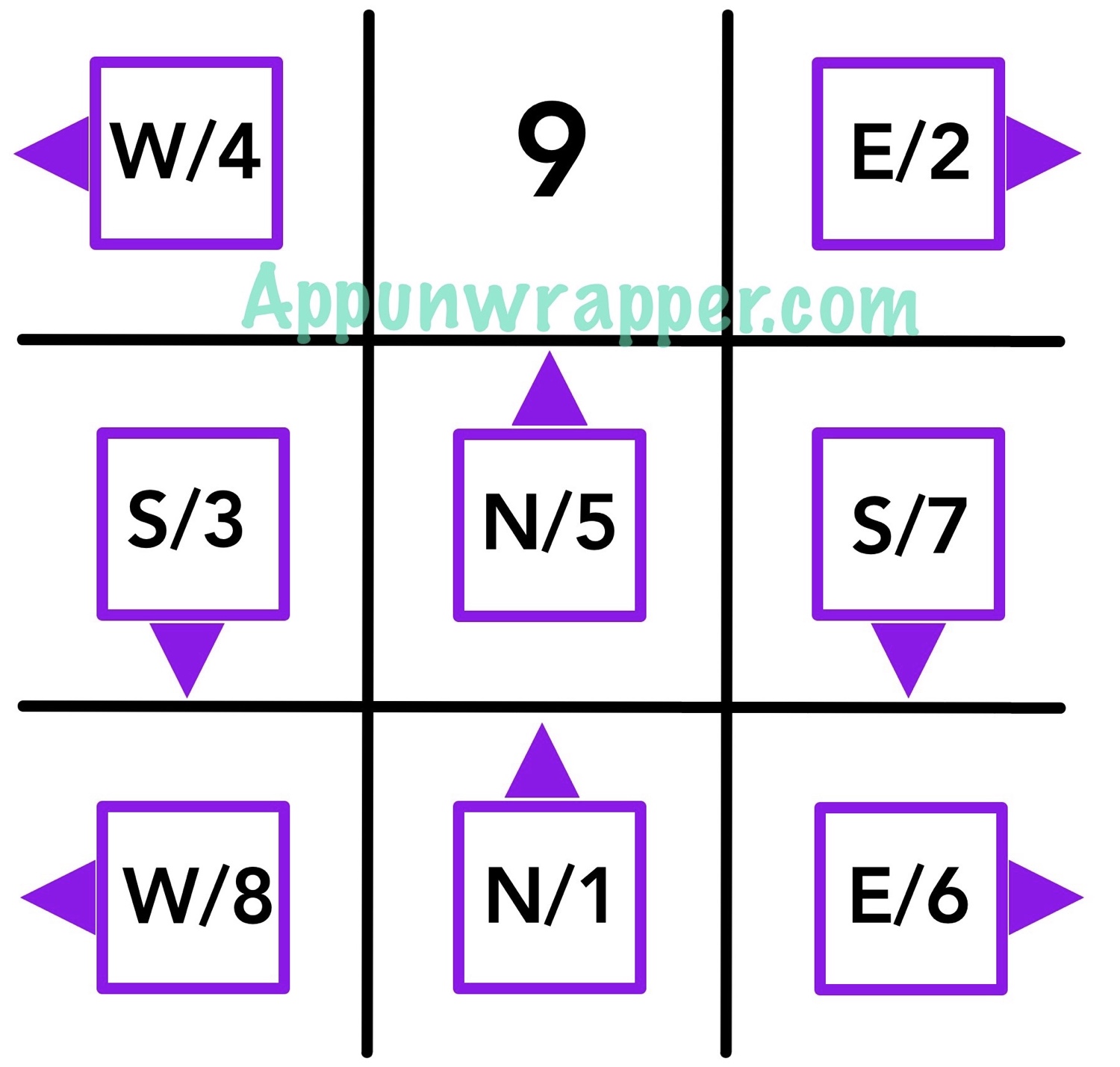 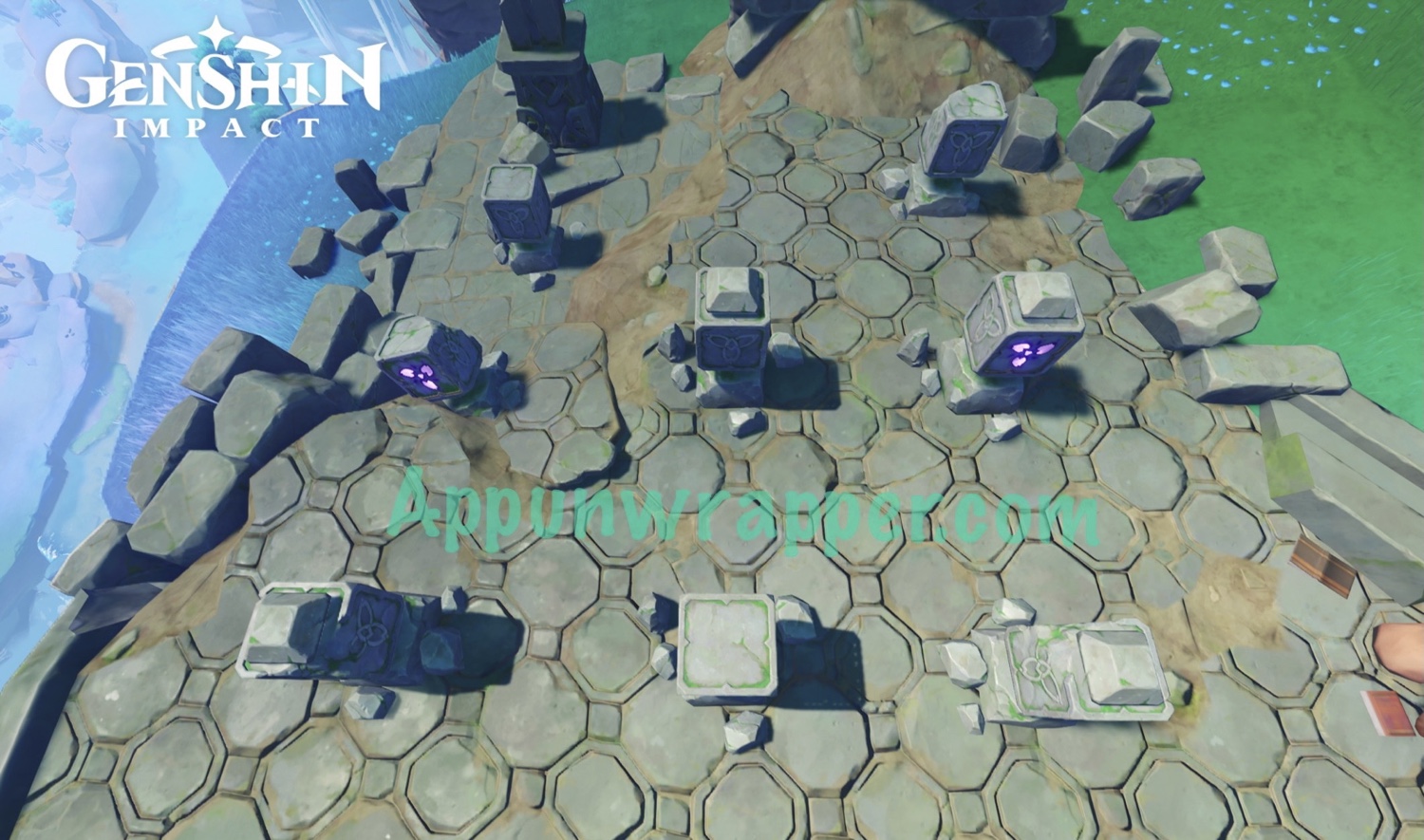 Again, leave and come back to get the puzzle to change. And the third and final puzzle in this area goes like this: 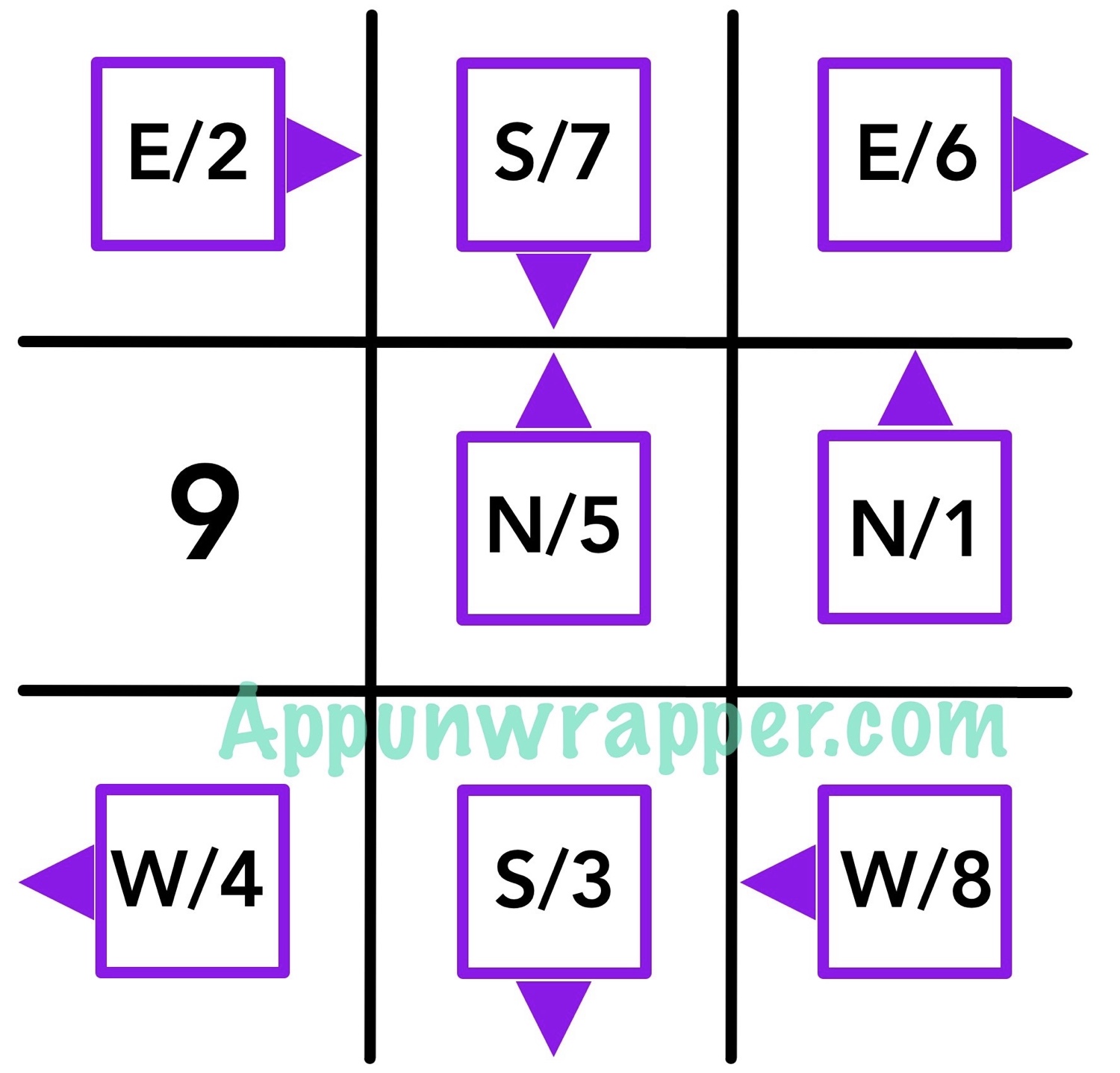 And that’s how to solve each of the three puzzles in this spot!