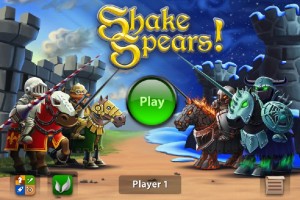 Shake Spears! is one of those games I bought immediately after trying the free version, but I got bored of the full version before defeating the final boss. That’s mainly because of the dumbed-down AI. Each opponent had a pattern and once you learned it, there wasn’t much of a challenge. Aside from the occasional tough boss, the game was a breeze. But losing to a boss meant replaying several easy jousts just to have another chance at the boss. This got old fast and I lost interest — after reaching level 20, getting all the skills, and nearly completing the game. I didn’t see any reason to keep playing.

I did find the game enjoyable while I was playing it, so I was thrilled to hear that Alawar was releasing a new update (1.2.2) of Shake Spears! So is the new content worth your time? Read below to find out.

The game is a jousting version of rock-paper-scissors, with some added twists. At the start of each joust, you get to choose from a variety of special skills that range from stone armor to blinding flash grenades. Your opponent also has special skills, so you need to choose wisely. There are four types of opponents: Knight, Mechanic, Warlock and Alchemist. Each one has its own set of skills to use. You have the unique ability to unlock all the skills from all four opponents and use the ones that work best for you. 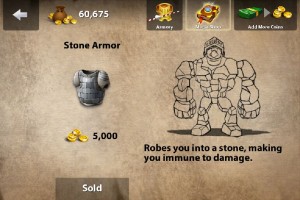 But you’re not just choosing a skill and watching the fight. You have control of your lance and your shield, and have to make sure they’re in the right position before you reach your opponent. The controls are fairly simple. You move your shield up and down by swiping along the left side of the screen. The lance is controlled the same way using the right side of the screen. You can continue to move both of them until the very second you clash with your opponent. But beware, because so can he! 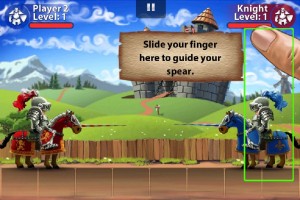 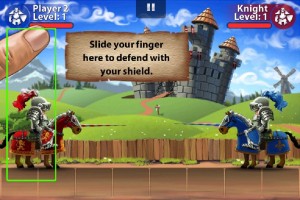 The new update introduces a survival mode called “Act of Valor.” The original adventure mode that you’re used to is now called “Path to Glory.” In Path to Glory, there are four lands to play through, and a total of 20 levels. Each level consists of 5 stages, or battles, that you have to play in order. This makes the entire tournament a total of 100 battles! If you lose any of the battles, you have to start the level from scratch. 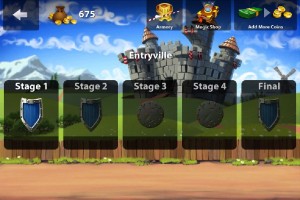 You earn gold after each victorious joust, which can be used to buy skills in the magic shop or level up your character in the armory. Increasing your character level will upgrade your lance, armor and health. The game boasts unlimited upgrades, which is nice because you’ll still be able to invest your gold into something once you’ve bought out the entire magic shop. This means you can keep replaying levels to earn gold and make your knight stronger for the final battle against Mordredd. 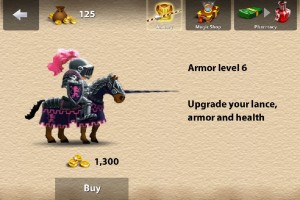 In the new survival mode, “Act of Valor,” you fight several opponents in a row without healing or regaining lost armor pieces. If you make it through a round, your armor is restored. After several battles, you’ll encounter a boss. Survival mode goes at a much faster pace than the story mode, and you reach the bosses earlier. The catch is, you start from scratch each time you lose. You’re back to level 1, battle 1, given 1,000 coins and 2 health potions. Any gold or upgrades you earn will only last for this game. If you lose, you start back at level 1 with the same 1000 gold and 2 health potions. The goal is to last longer each time you play.

I would have liked it better if there were some RPG elements involved in the survival mode. One of my favorite survival games is Solomon’s Boneyard, because it allows you to unlock permanent perks that enable you to survive longer. It means your gold is worth something, and you have something to carry over from your last game to help you in the next one. The other thing I don’t like is that you can buy health potions, but only with cash. I understand companies needing to make money, but I firmly believe that any items in a game should be purchased with in-game currency. If someone needs more of it to buy that item, *then* they can choose to purchase it with cash. But offering potions for cash-only means that you must spend money to compete. This is unacceptable in my book and dampened the experience for me. 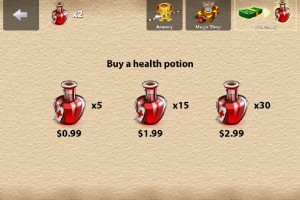 There isn’t much of a story here. In the beginning of the game, you’re treated to a short animation of your knight wooing a princess, who requests that you battle in a jousting tournament to win her over. Perhaps the game would feel more immersive with some cut scenes between levels, but some might like that the game play is uninterrupted from start to finish. It really depends on your preference.

The knights move a bit like paper dolls tied together by string. While it’s obvious that all the little pieces move separately, this gives it a light and whimsical air. The horses’ feet dangle beneath them as they run. Again, this is an acquired taste that some may hate while others will find charming.

Each land has a different background, but other than that they don’t really vary. While the game does look great, you’re not likely to choose it because of its graphics. 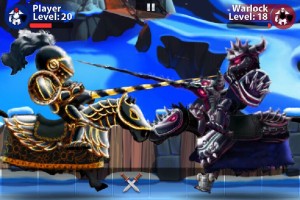 The music is very relaxing, even haunting at times. It actually reminds me of the Harry Potter theme. It might not be 100% appropriate for this type of game, but I still like it. There is a different soundtrack for the menus and the jousting, but they’re similar. I much prefer this to a noisier soundtrack. I could never find the sound options in the game, so it’s a good thing the music isn’t irritating.

The sound effects are done very well. Each joust begins with a flourish of trumpets as the horses snort in preparation. There’s an audible “clash” each time a lance hits a piece of armor, and the jousters grunt in pain when they’re hit. Pieces of armor also clang as they hit the ground. The variety and quality of the sound effects do an excellent job to bring the battles to life. 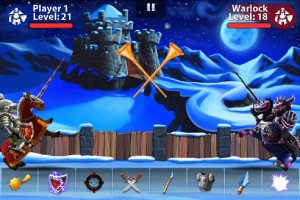 The real replay value comes from playing around with different combinations of skills to find what works the best against each type of opponent. For the completists out there, the game gives you a star rating for each stage based on your performance. If you want to get three stars for all stages, you’ll need to defeat your opponent while taking very little damage. There are also GameCenter and OpenFeint leader boards and achievements to earn, although many of them will come naturally just by playing through the game.

Update 1.2.2 added a lot of replay value with the new “Act of Valor” mode. For those who found the original game too easy, this survival mode should offer plenty of challenge to keep you busy for quite some time. That is, as long as you don’t mind starting from scratch each time. 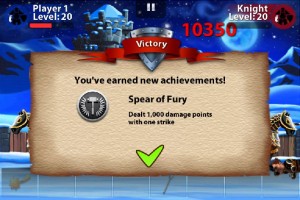 Shake Spears! might not be for everyone, but it does offer unique game play amongst all the Angry Birds clones and other rehashes found in the iPhone app store. If you tried the first version and liked it, but found it a bit too easy, give this new one a try. The survival mode will challenge even the best knights in the kingdom! But if you don’t like starting from scratch each time you play, you might want to reconsider it. It will likely appeal to hardcore players more than casual players. Another update to add some unlock-able perks in survival mode would probably please everyone. I would have also given it a higher score if the potions weren’t cash-only. Shake Spears! can be a near-perfect game with some more tweaks.