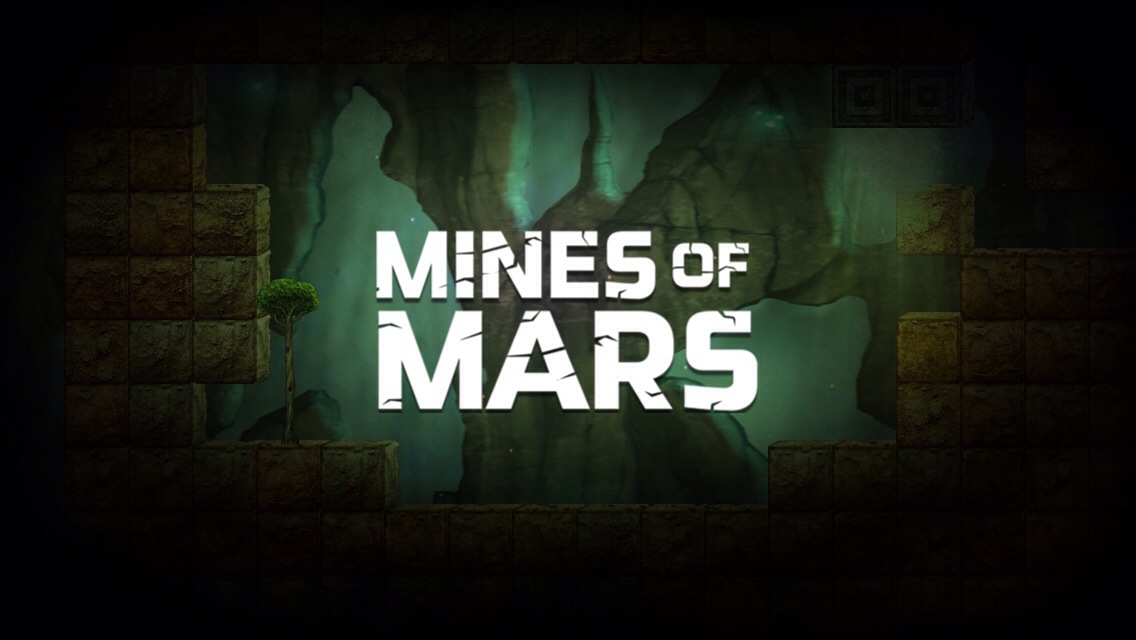 Mines of Mars is a unique game that blends relaxing exploration, mining and crafting with heart-pumping combat. It’s a strange mix that almost seems like it wouldn’t work at first.

I’ll admit, it took a me a bit of time to warm up to it. Every time some creature attacked me, I ran scared and closed the game. I was also having trouble finding the materials I needed, which was making it a frustrating experience. It wasn’t until I really started doing some exploration that I realized it’s a pretty open world, and the materials are out there to find if you just dig deeper. It does get harder to get there and back without the proper upgrades, but it’s still doable. 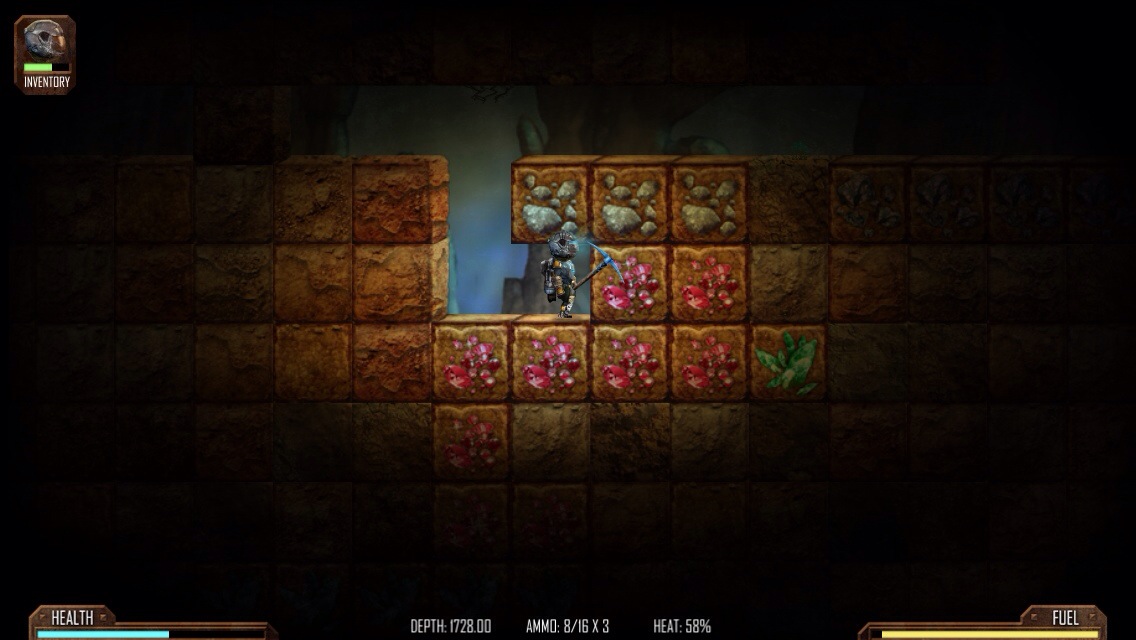 So how exactly does the game work? You are a miner who just landed on Mars. On the surface of the planet, you have your home base, where you can refuel, heal up, grab ammo, cut gems, smelt ores, and, last but not least, craft equipment. There’s also a portal on the surface that takes you underground to any portal that you have available at the moment. Once there, you start mining. You will be doing a lot of this, so relax into it and enjoy! 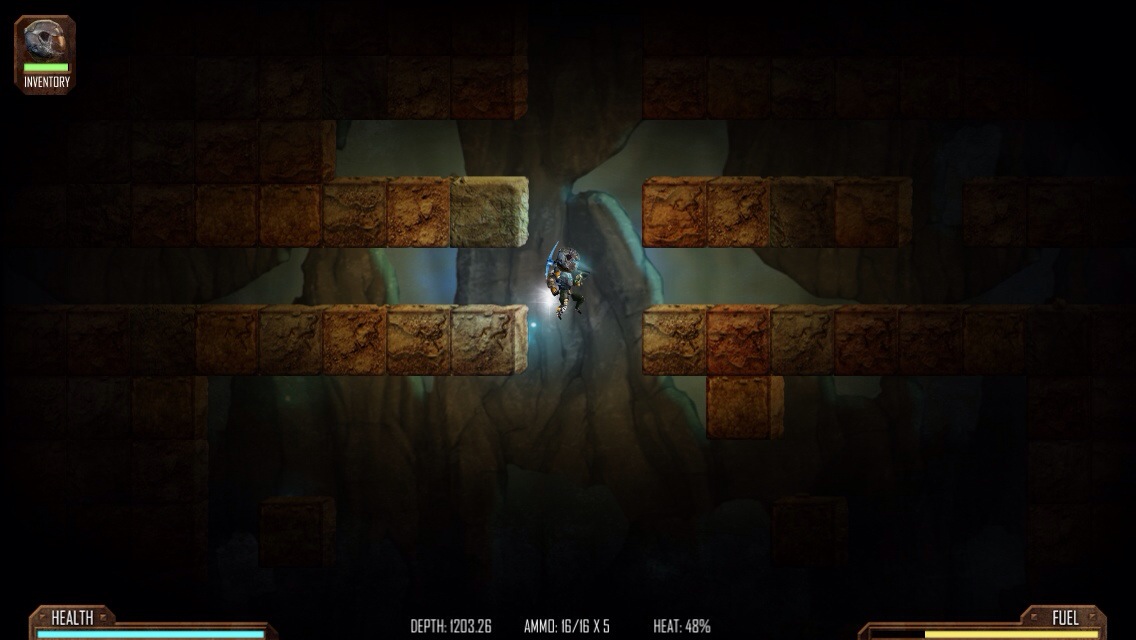 The controls, for the most part, are pretty basic and work well. To walk or run, you tap and hold the left side of the screen in the direction you want to go. To fly using your jet pack, simply slide your finger upwards. To mine, you simply walk into a square of rock. You can only mine left, right and down. But in a pinch, you can also shoot a rock above you with your gun. Now, the gun is a bit trickier and may take some time to get comfortable with it. To use your gun, you tap and hold the right side of the screen, and aim by moving your finger around the screen. You can also use it while flying, but it may take some practice. I found combat incredibly clumsy at first, but the more I play, the more comfortable I get with it. 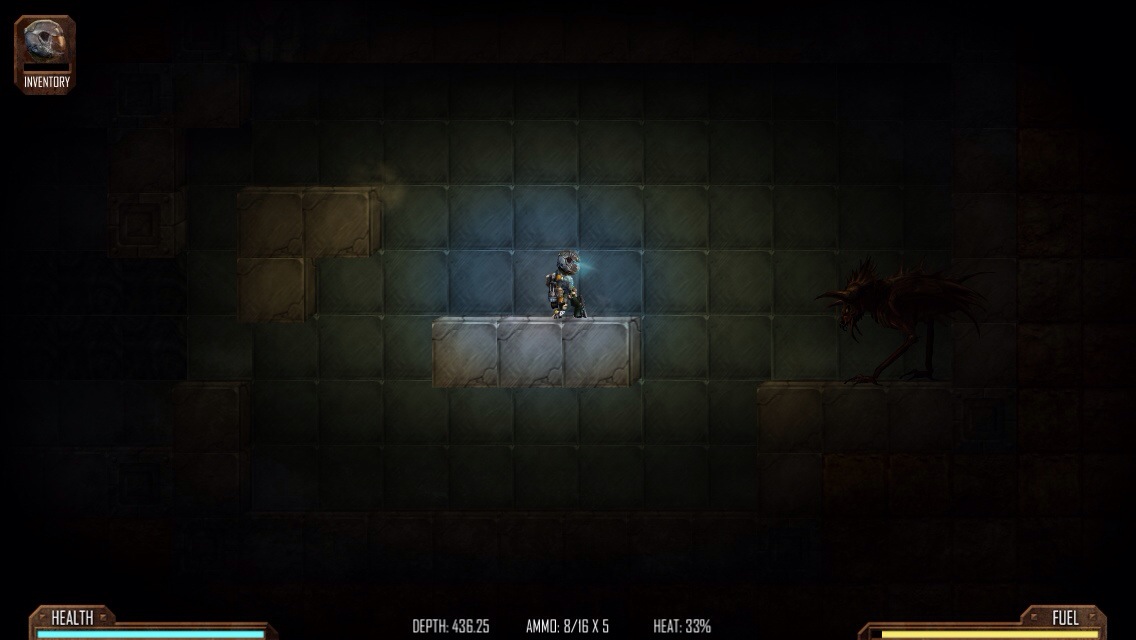 The problem is, most of the creatures that attack you (at least early on) have no ranged attack. They just run at you, through you, on top of you. They’re scary and some of them are fast. It would have been nice to be able to swing my pickaxe or use my drill against them as a melee weapon. Trying to fire while a creature is on top of you is pretty hopeless. Also, if you run out of ammo you can’t take on any enemies until you go back to base camp and fill up. A melee weapon would have meant you can work your way around that a bit and give you a bit more flexibility. I know it would have made the game more enjoyable for me, at least. It would also make more sense, if you think about it. Why would you waste precious ammo when you have a perfectly good pickaxe you can swing? I did suggest this to the developer and he responded that they may add it, so I’m hoping that might be an option in a future update. 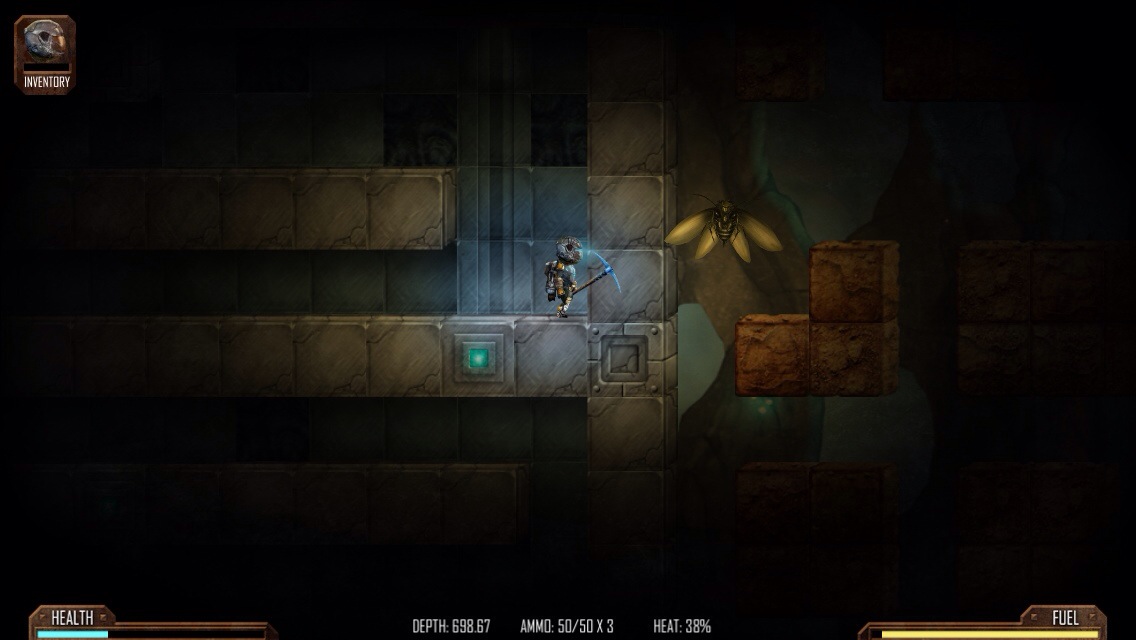 A really cool element that I like is that you’ll encounter plants and animals underground. These flora and fauna grow and evolve the longer they’re allowed to survive. The plants, luckily, never harm you (at least not that I’ve seen), so you can just admire their beauty. But the little critters that you meet — as cute as they are, following you around– will grow into big bad monsters if allowed to live. So shoot them when they’re harmless if you can! 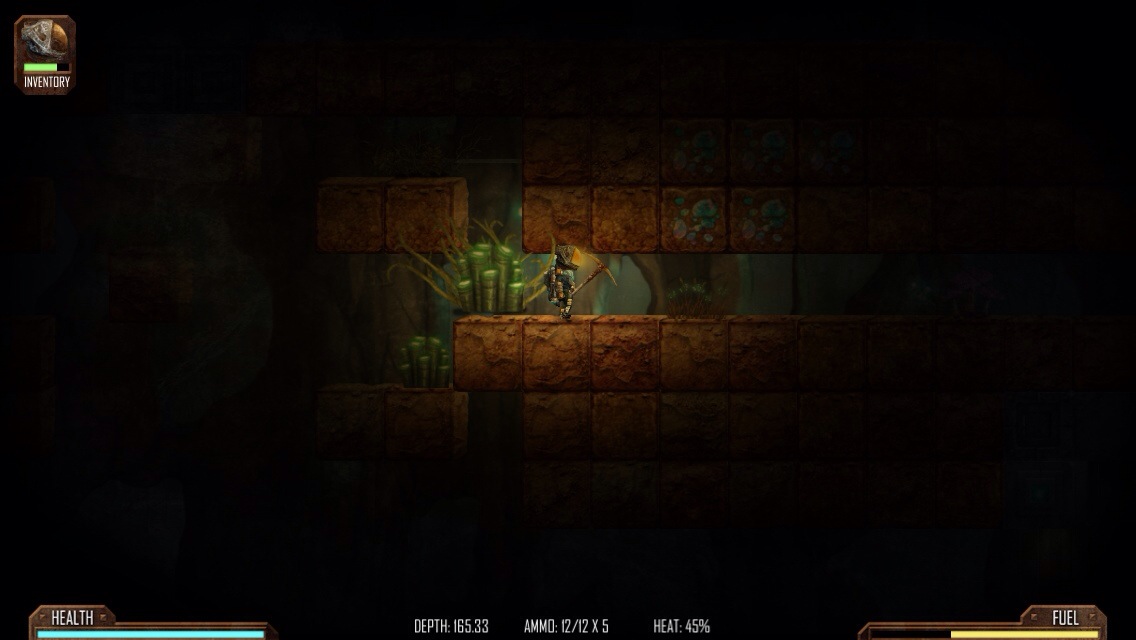 Besides battling the creatures and monsters jumping out of the walls, you’ll have to defeat a boss in each area. However, they’re confined to their own enclosed space, a sort of dungeon if you will. So you can’t just wander upon a boss by accident. You also don’t have to defeat a dungeon boss in order to continue playing.
If you’re scared of the enemies, like I am, you can take it slow and try to upgrade your equipment little by little until you feel like taking on the boss. I had access to the first two boss areas before even attempting to fight either of them. This gives players more flexibility to play at their own pace. 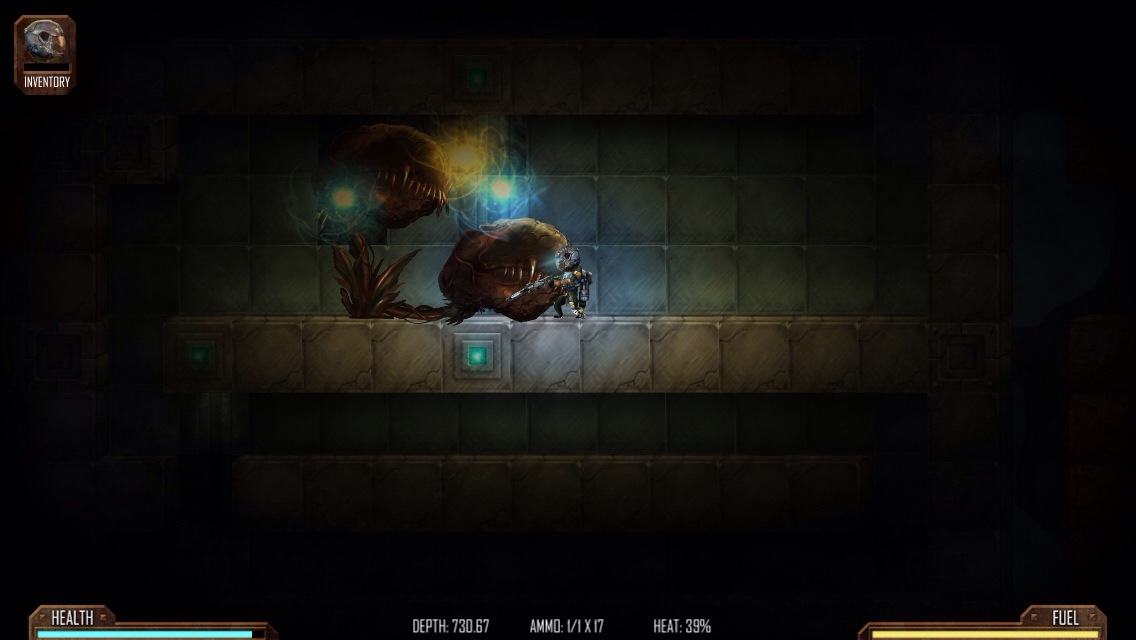 The crafting system is where the game really shines. Each piece of equipment can be upgraded to make it easier to dig faster, longer, or deeper. And all equipment is crafted using the materials you mine. It’s very rewarding to dig through all that rock and find that gem you so sorely need so you can get a brighter headlamp or more efficient jetpack. Every upgrade is noticeable and worth the effort, but what each player focuses on first will depend on his or her play style. 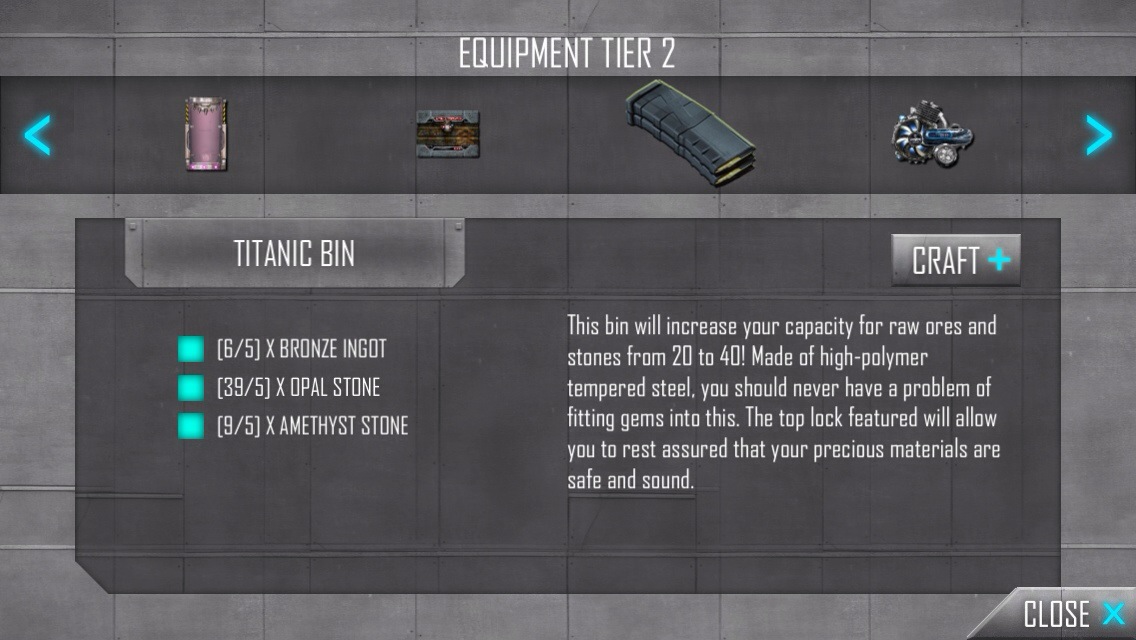 For those who like their games to last a long time, you should be quite pleased with Mines of Mars. After almost 8 hours of clocked playtime, I only had 24% of the game completed. And you can easily lose yourself in the game for hours, just digging digging digging, looking for that material you need so badly. 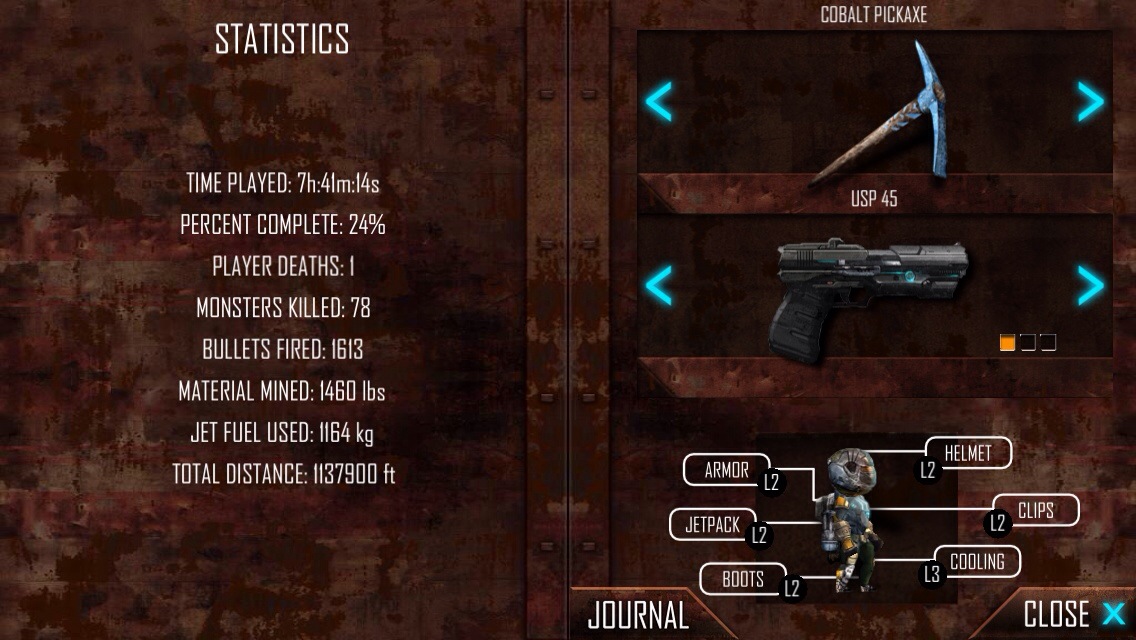 I should also mention that the music helps you get lost in the game. It’s very atmospheric, and sci-fi-ish enough to make you feel like you’re on Mars. The sound effects also work great. I was surprised how mesmerized I got by the rhythmic sound of the pickaxe hitting rock. It’s almost hypnotizing. The sound effects also serve as a warning sign that deadly creatures are lurking nearby, because you can hear them scratching and pecking at the rocks as you get closer to them. 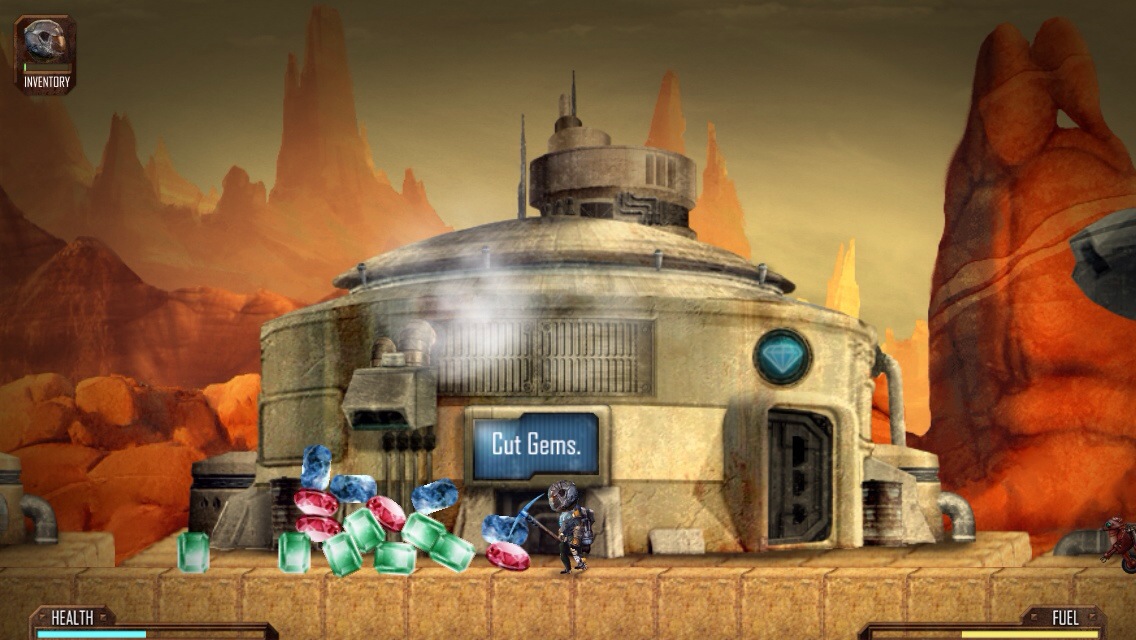 Mines of Mars is an odd mix of genres, but it blends them surprisingly well. It’s incredibly addictive once you get into it, one of those “just one more round” games. If you like exploration and crafting and don’t mind the challenge of monsters jumping out at you while you’re trying to work, give it a try and download it here. [DKB url=”https://www.appunwrapper.com/MoM” text=”Download” title=”” type=”” style=”” color=”green” width=”” opennewwindow=”” nofollow=””]

If you need help with the game, check out our Mines of Mars Walkthrough and Strategy Guide.