Please, Don’t Touch Anything
By: Bulkypix 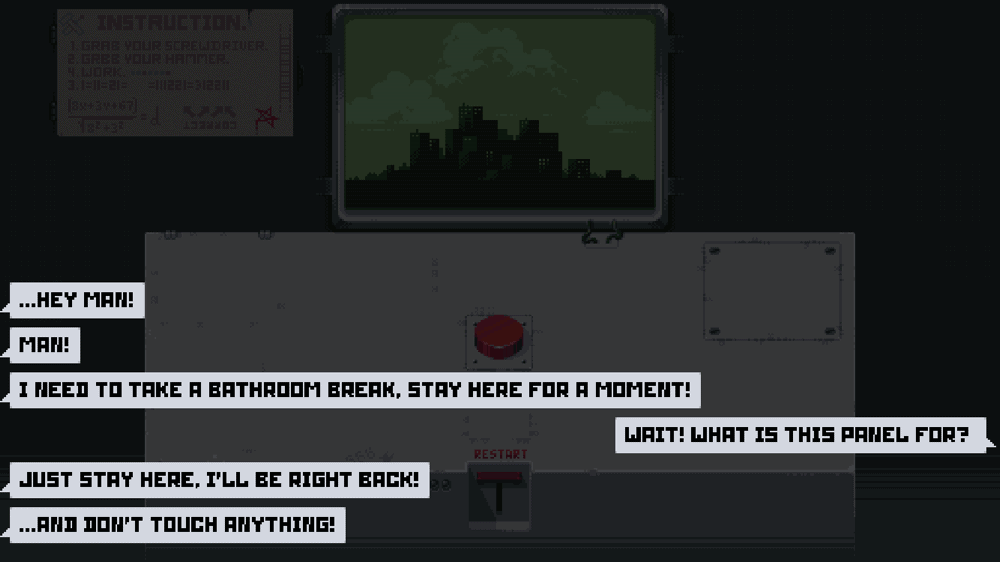 I’ve been taking my time with Bulkypix’s iOS port of Please, Don’t Touch Anything because I want to savor it and try to figure it all out on my own. It turns out, though, that the iOS version has three new endings that weren’t on the PC version. The PC version had 22 endings, while the iOS has 25. I’m going to list the new ones here as I find them, so don’t read if you don’t want to be spoiled!

First of all, I found a UV light, which apparently wasn’t in the PC version. It reveals a whole bunch of clues and drawings. Some parts have proven useful so far, but I’m still deciphering the rest. You can see what it looks like and how to access the UV light in this video below:

The first clue from the UV light that made sense to me is that if you use the screwdriver to reveal the four colored buttons, the UV light will show a number 4 on the red button. If you press the red button four times, an object appears that I haven’t figured out how to use yet. 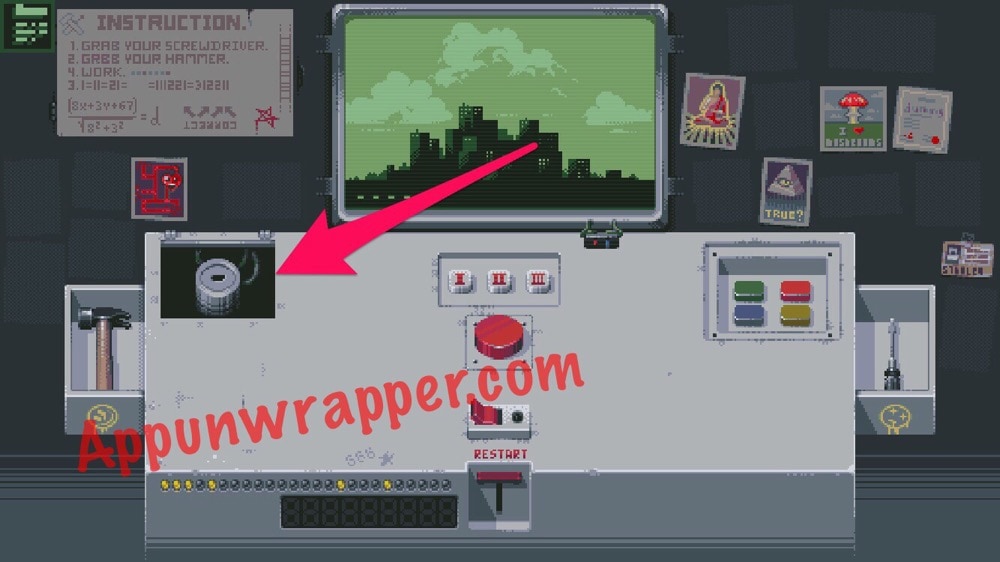 To get one of the iOS endings (ending 24), get the UV light the way I show in the video above. Then, use the UV light on the four green buttons to show “MORSE”. Then, use the UV light on the note that says “DON’T DO IT”. The letters DOT will light up. So look up Morse code for DOT and you get -Γò¼├┤Γö£├ºΓö£ΓöéΓò¼├┤Γö£├ºΓö£Γöé—-, or dash dot dot dash dash dash dash. Use the Bender buttons that say 0 and 1 to type out 1001111 in binary and you’ll get the ocean/beach ending with a little sailboat. 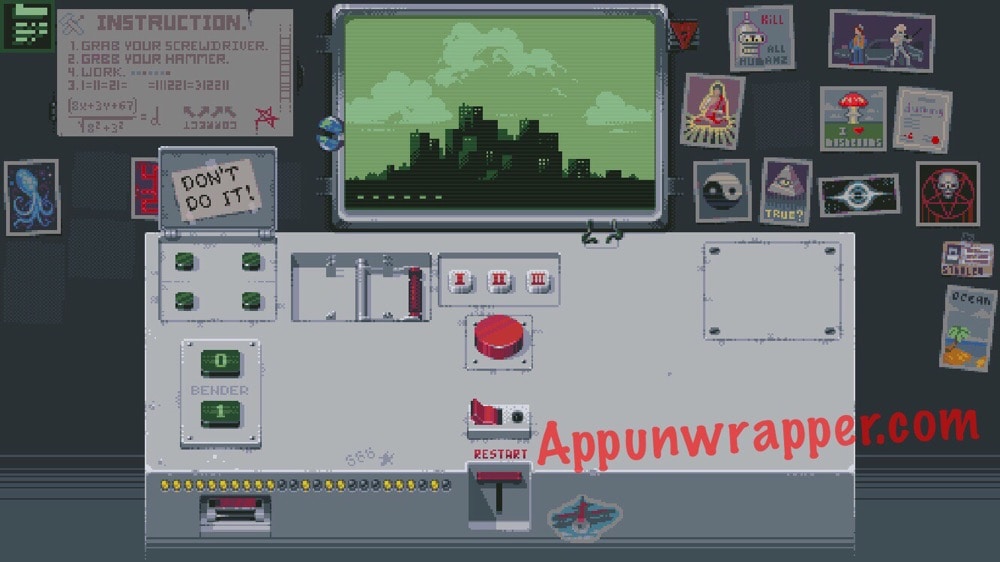 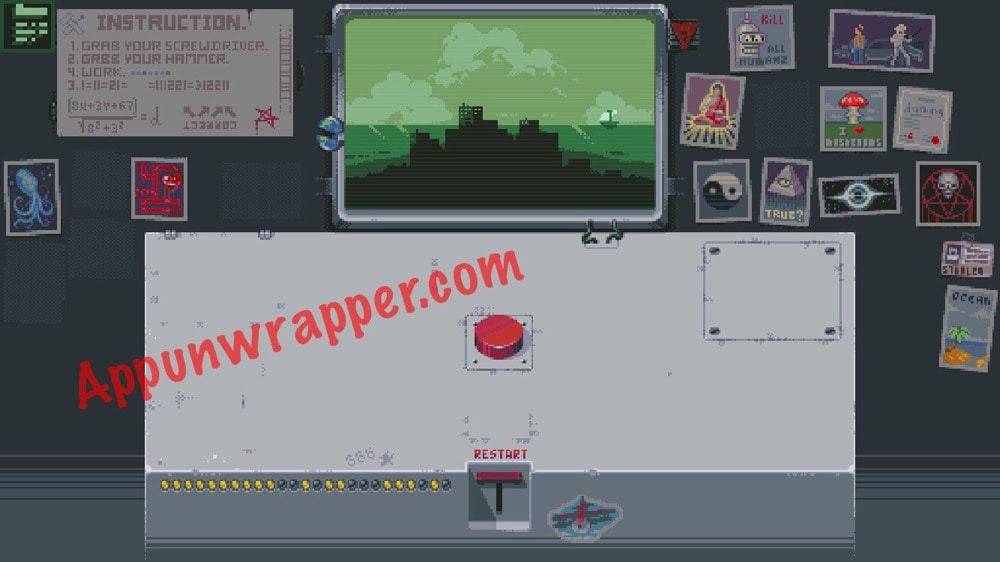 You can also see the video here:

Someone asked for a photo of the arrows ending, which also seems to be a new one (ending 22?). You get it by tapping on the big red button once, then on the small grey arrow that appears next to it, and then keep following the arrows. You’ll eventually open a 3×5 grid of green buttons. You need to turn them all yellow (lit up). If you do so in 6 moves, you get the Strange Numbers achievement. Thanks to Jacobo911 for the tip how to get the achievement. 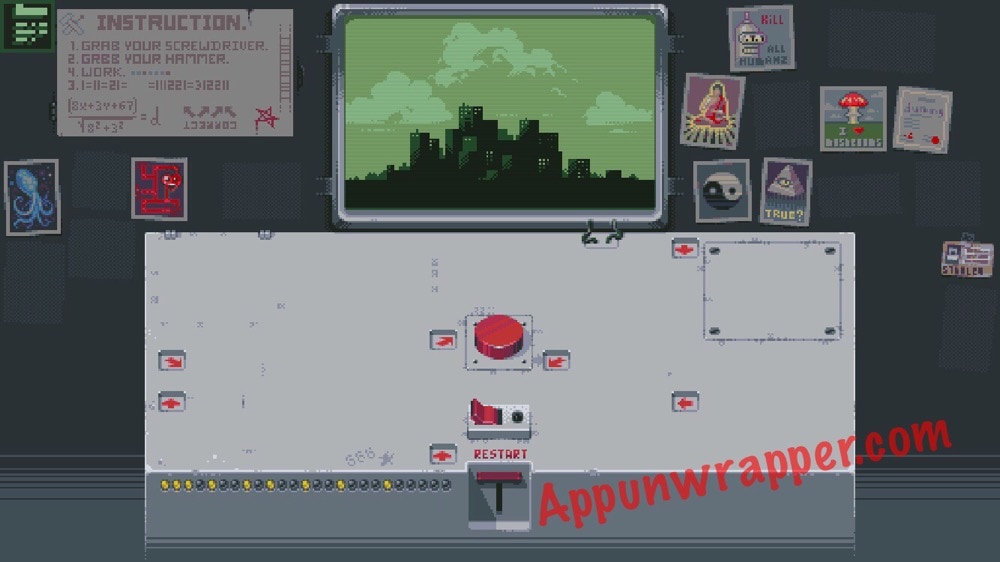 Here’s a video for it:

Update: Thanks to Alex, I got ending 23 and recorded it. I’m not sure why, but if you enter “2001” (Space Odyssey, maybe?) into the ten-digit keypad, three wheels pop up. The UV light shows a solar system with a question mark on Pluto. So spell out Pluto with the three wheels and press the grey button to get a key. Then open the panel with the four colored buttons and press Red four times to get the keyhole. Put the key in the keyhole to get ending 23 with the rocket. If you got 24 endings at this point, you’ll be able to access the last one with the coffee. 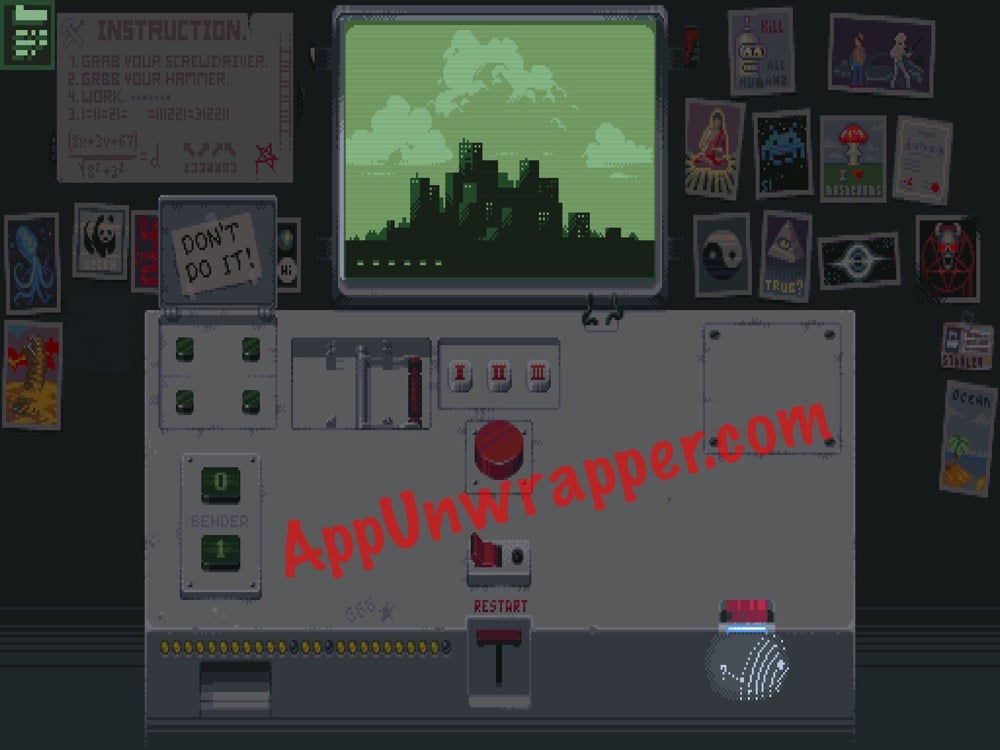 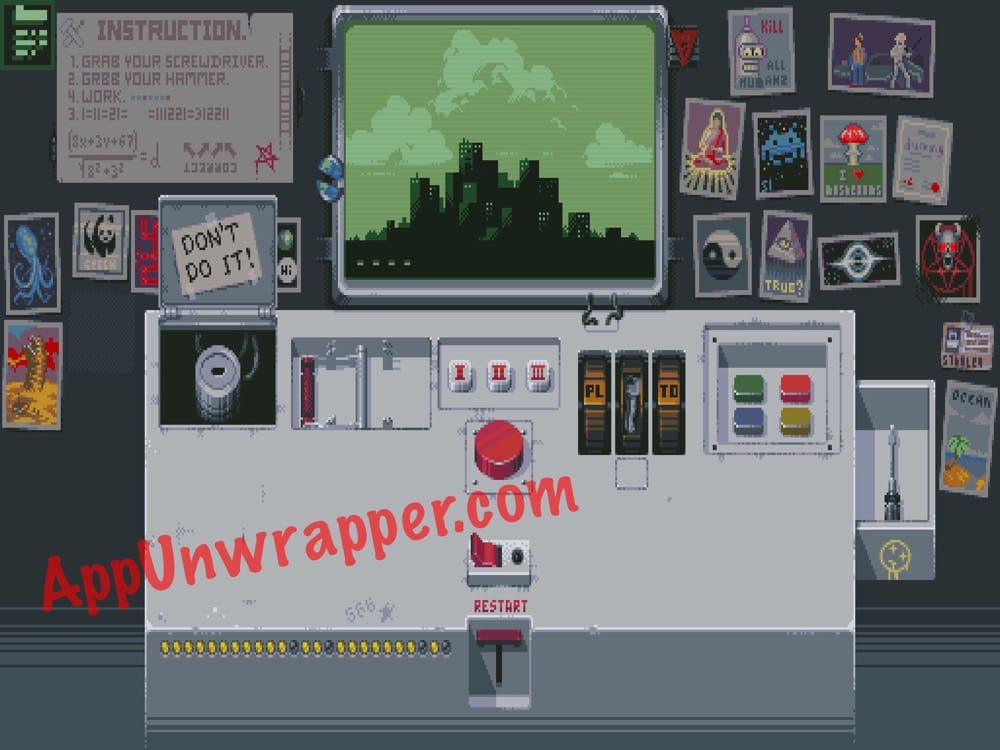 You can also see a video of this:

There are also some numbers you can see under the UV light. If you translate them to letters using 1=A, 2=B, 3=C, etc, you get a message that isn’t very helpful.

DECIPHERING
IT
WAS
COPLETELY
MEANINGLESS

(not sure why an M is missing in “completely”)

The 23.1.19 is between wings, so I don’t know if it had some purpose. The panel that opens up to take the diamond also looks like feathered wings. So perhaps they’re related? 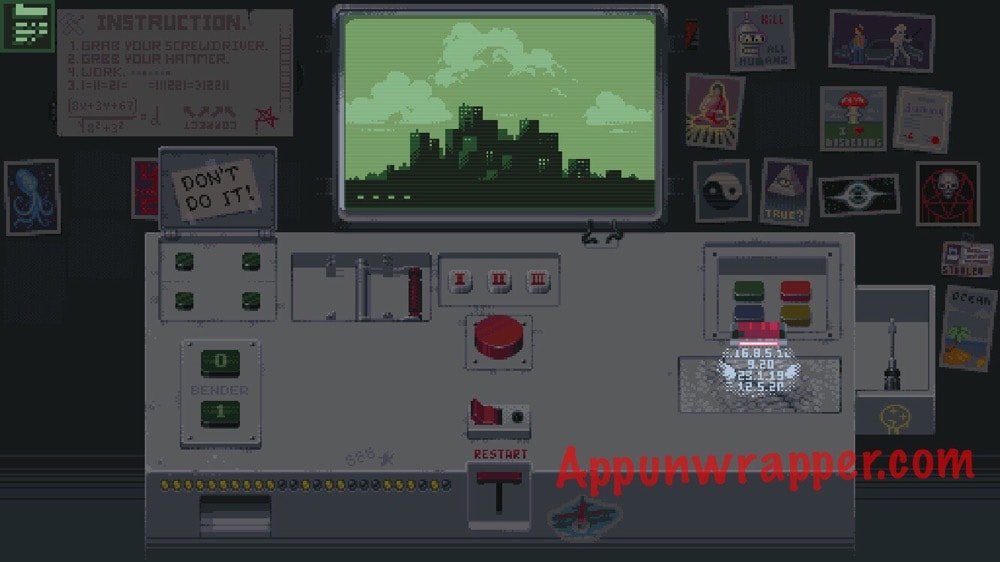 Another clue is Ostap Bender, who’s a character in a book called “The Twelve Chairs.” There also happens to be 12 chairs around the Bender buttons. 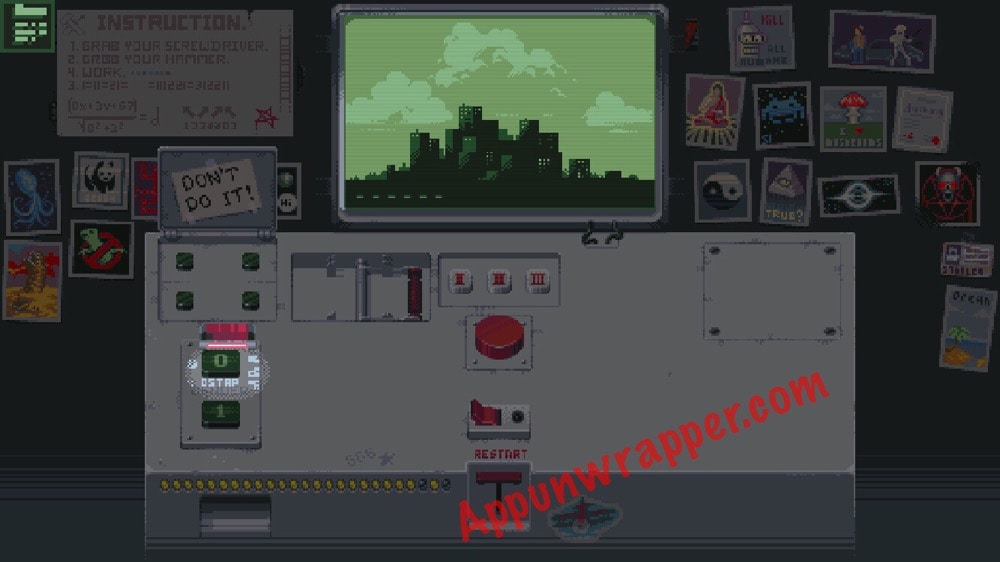 If you need any help with other levels that I’ve completed, feel free to ask. This is what I have so far: 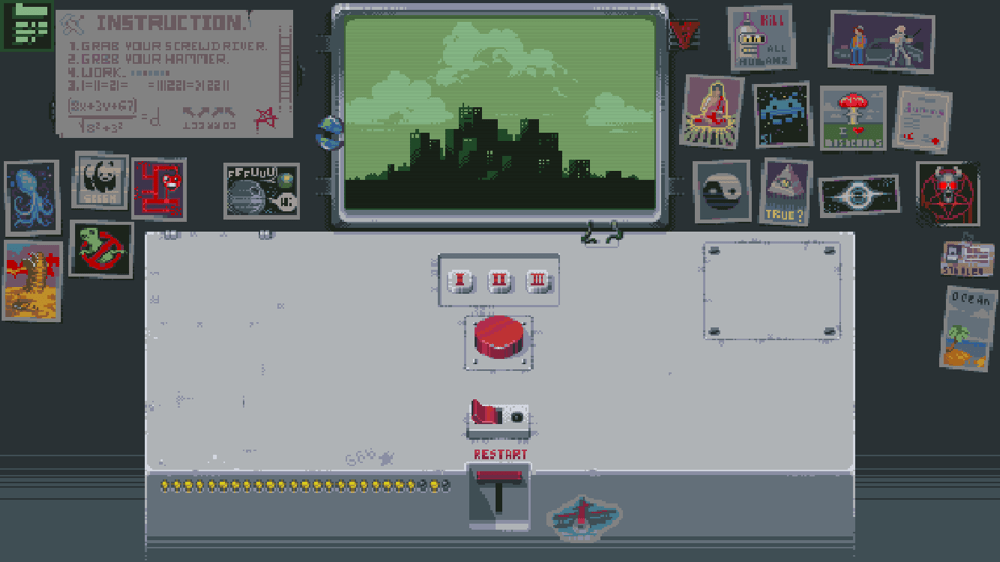