If you ever thought, “why isn’t there a point-and-click adventure built out of old Renaissance paintings,” you might be happy to learn that there is indeed a point-and-click adventure built out of old Renaissance paintings. Joe Richardson’s aptly named Four Last Things has been out on PC since last year, but mostly went ignored by me because I hate those dirty, disgusting things. So I was excited to discover that it was coming to iOS, where I could lovingly caress the artwork with my hands. I was lucky enough to play the game ahead of release and am happy to report that it’s every bit as ridiculous as you might hope. It’s not a long game, but I enjoyed every second of it.

You play as some wandering bloke who’s made a long journey to the Church to confess his sins. But when he gets there, he’s told they can’t absolve him of any sins committed outside their parish. Apparently, this isn’t something you can lie about, so he has to commit all seven ghastly deeds again — pride, greed, lust, envy, gluttony, wrath and sloth — this time within the same jurisdiction as the Church. Yes, it’s a silly premise, and I love it. You’ll have a checklist to keep track of your sins and Hieronymus Bosch’s The Seven Deadly Sins and the Four Last Things loudly announces when you’ve achieved one of them. 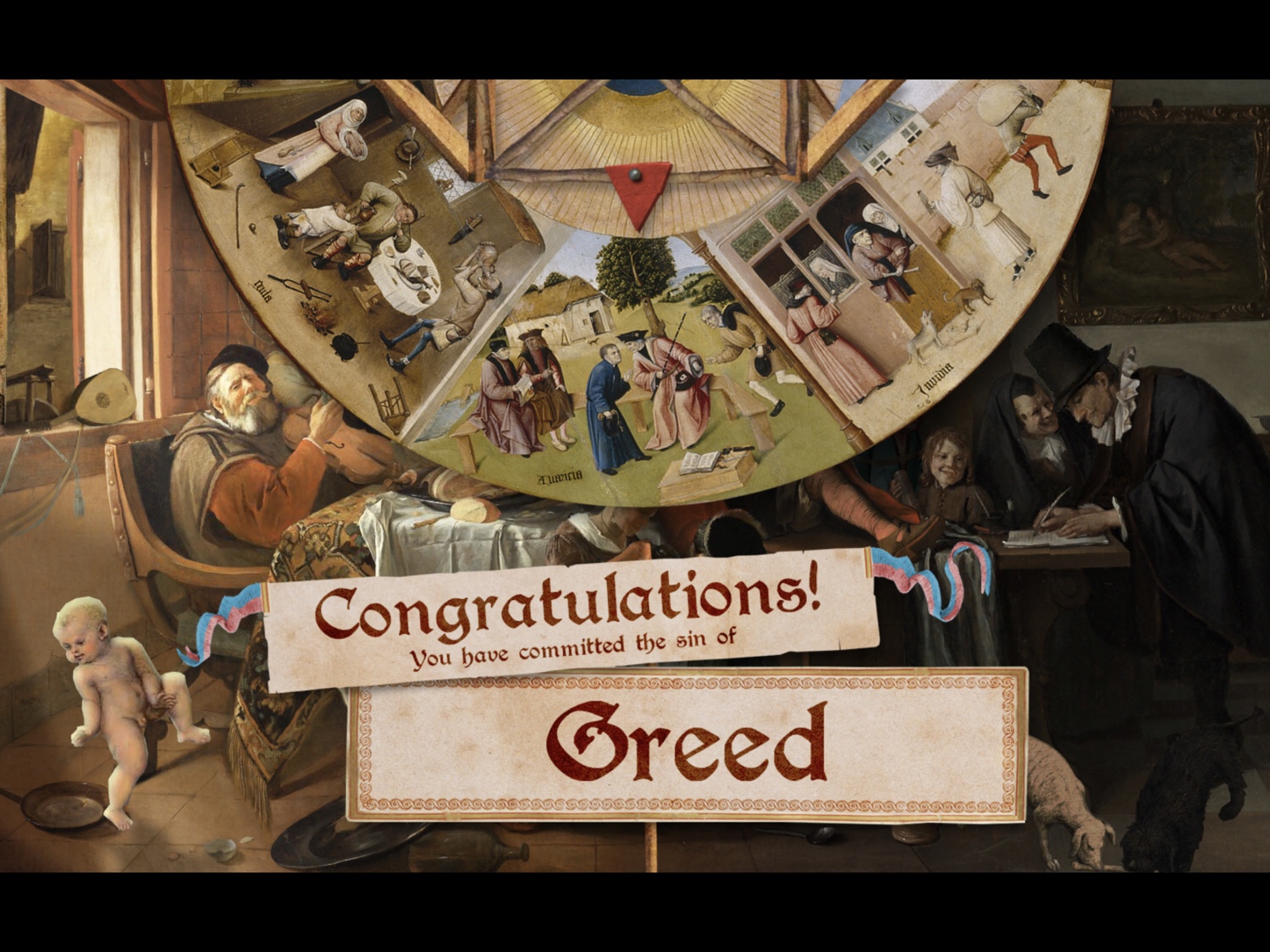 It works very well on touchscreens, despite the black bars on both iPad and iPhone. Just ignore them, because it’s still better to play on a mobile device than be chained to a computer, yes? The controls are simple. Tap anywhere on the screen to walk there, or double-tap to run. Tap on a person or object to interact with them. You have three options — an eye, a mouth, and a hand. The eye is always used to look at or investigate something. Depending on what you’re interacting with, the mouth and hand will work differently. For instance, using your hand on an object will be translated as an attempt to pick it up. Using your hand on a person might result in clapping or slapping. Or something else. Just try it to find out. 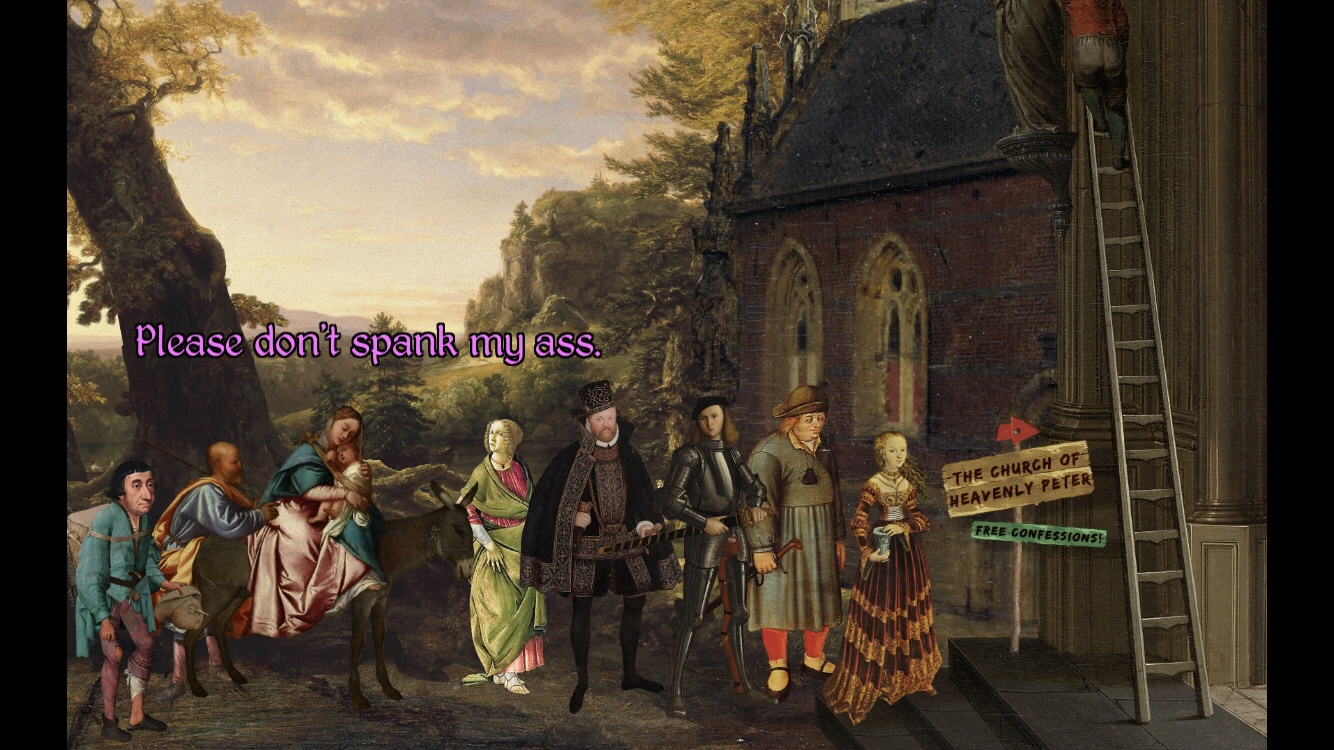 If you manage to collect some items, they’ll be in your inventory, which you you access by tapping near the top of the screen. From there, you can drag items to the environment to use them. I recommend trying everything just to see the responses you get. Like I said, it’s a short game, but you can prolong the fun by taking your time with it instead of just rushing to the end. Enjoy the journey! The inventory also houses a magnifying glass that works as a hot spot locator. I’m glad the game includes one, since it could easily become a pixel-hunting nightmare if you’re not sure whether you missed something in all the details. 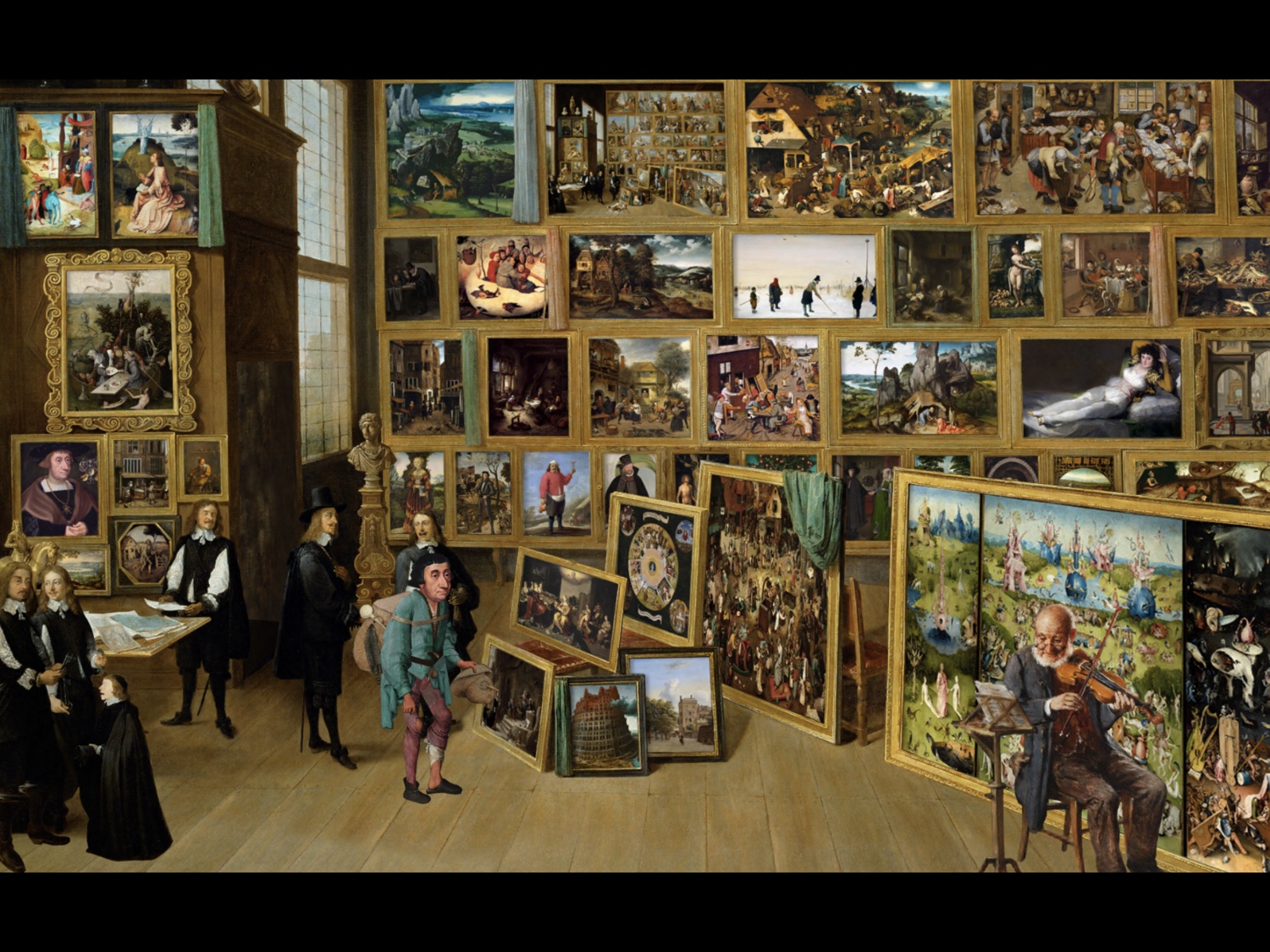 If you’re a Bosch fan, you’ll be delighted to know that The Garden of Earthly Delights also makes an appearance, although I wouldn’t mind seeing much more of it in a sequel. Besides his paintings, you’ll encounter works by Jan Steen, Adrian van Ostade, Pieter Brueghel, and others. There’s even a gallery in the game where you can find the paintings and identify the name and artist. Seeing all the paintings come to life is quite a trip, and on top of it you have the ridiculous plot and dialogue to bring the whole thing together. 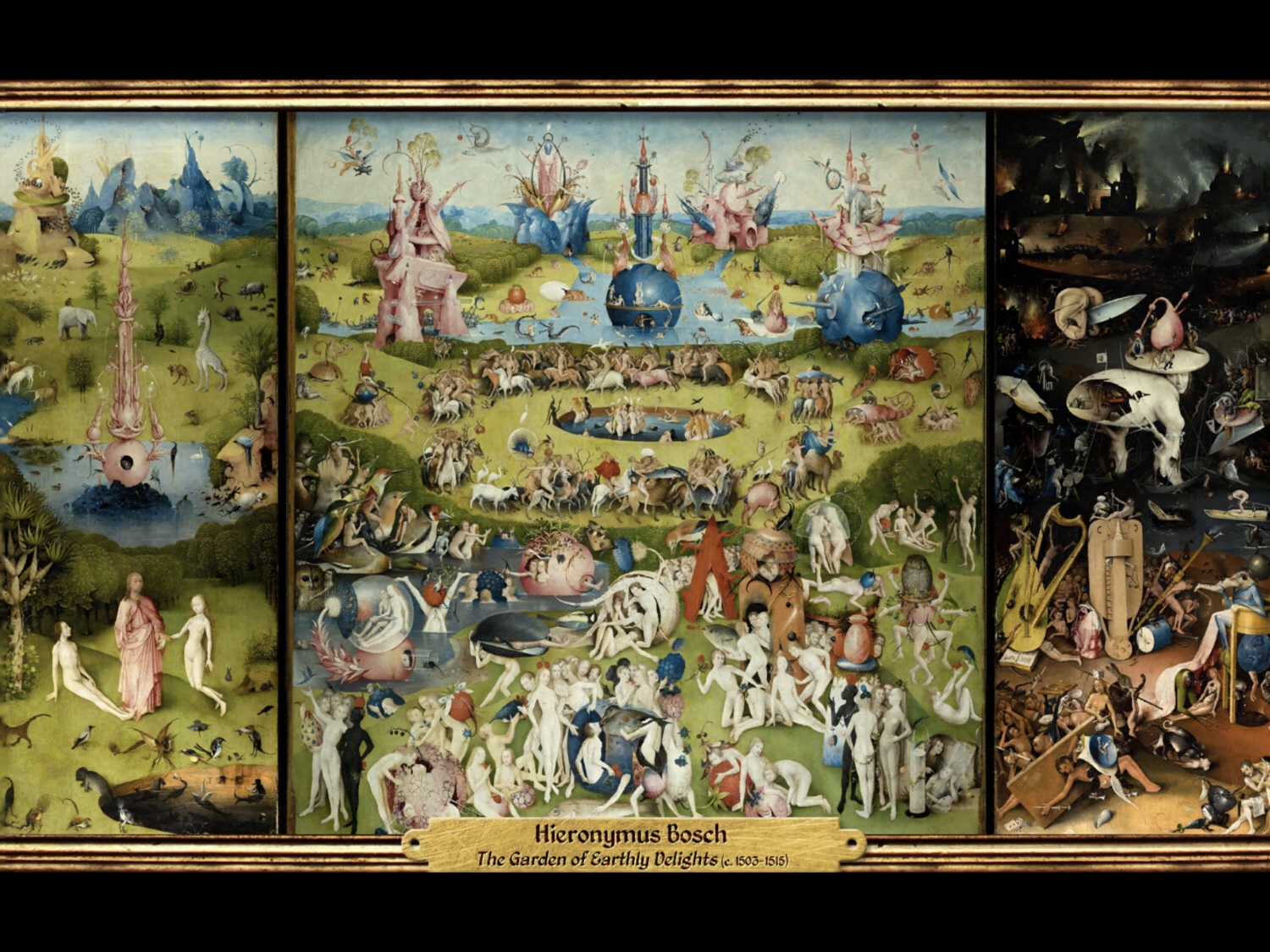 Having environments and characters made up completely out of Renaissance paintings is incredible enough, but the game just wouldn’t be the same without its humor. The jokes vary between irreverent, witty, and just plain silly, but the game had me smiling pretty much the whole time. There are fourth wall-breaking jokes about Kickstarter and open source artwork. And, of course, as can be expected, it pokes fun at religion, pointing out much of its absurdity. For instance, killing a thousand men in battle is fine as long as you don’t brag about it to a prostitute you’re banging, because then you’d be guilty of pride. 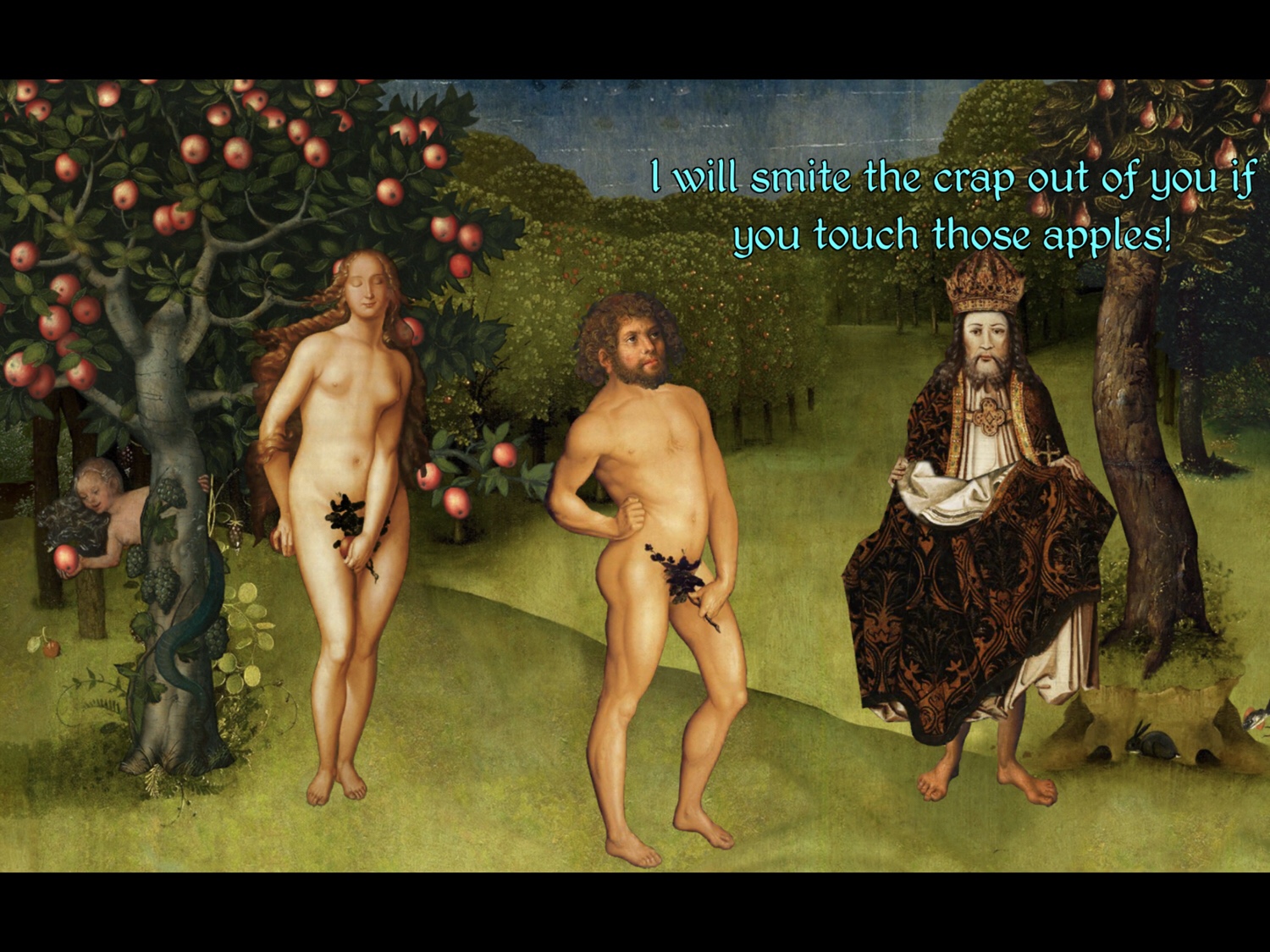 Puzzle-wise, you’ll have just a few inventory items to work with and your mouth. A number of the puzzles involve choosing the right dialogue options or answering riddles based on close observation of the artwork you’ve seen. For instance, you might need to figure out how to distract a guard monkey or win a pie-eating contest against the Pie King. Most of the puzzles were logical and I didn’t have too much trouble figuring out what to do. There were just a couple of points where I got stuck for a while and got a little antsy. The game’s music didn’t help. Each scene has its own band or musician playing a different song. It’s charming and entertaining at first, but if you get stuck and are spending a lot of time poking and prodding and trying to figure out what to do next, that music can grate on the nerves. Each song is on a short loop and there’s no way to shut it and keep the sound effects, so I suffered through it. Otherwise, navigating around is pretty painless due to it being a fairly small world. 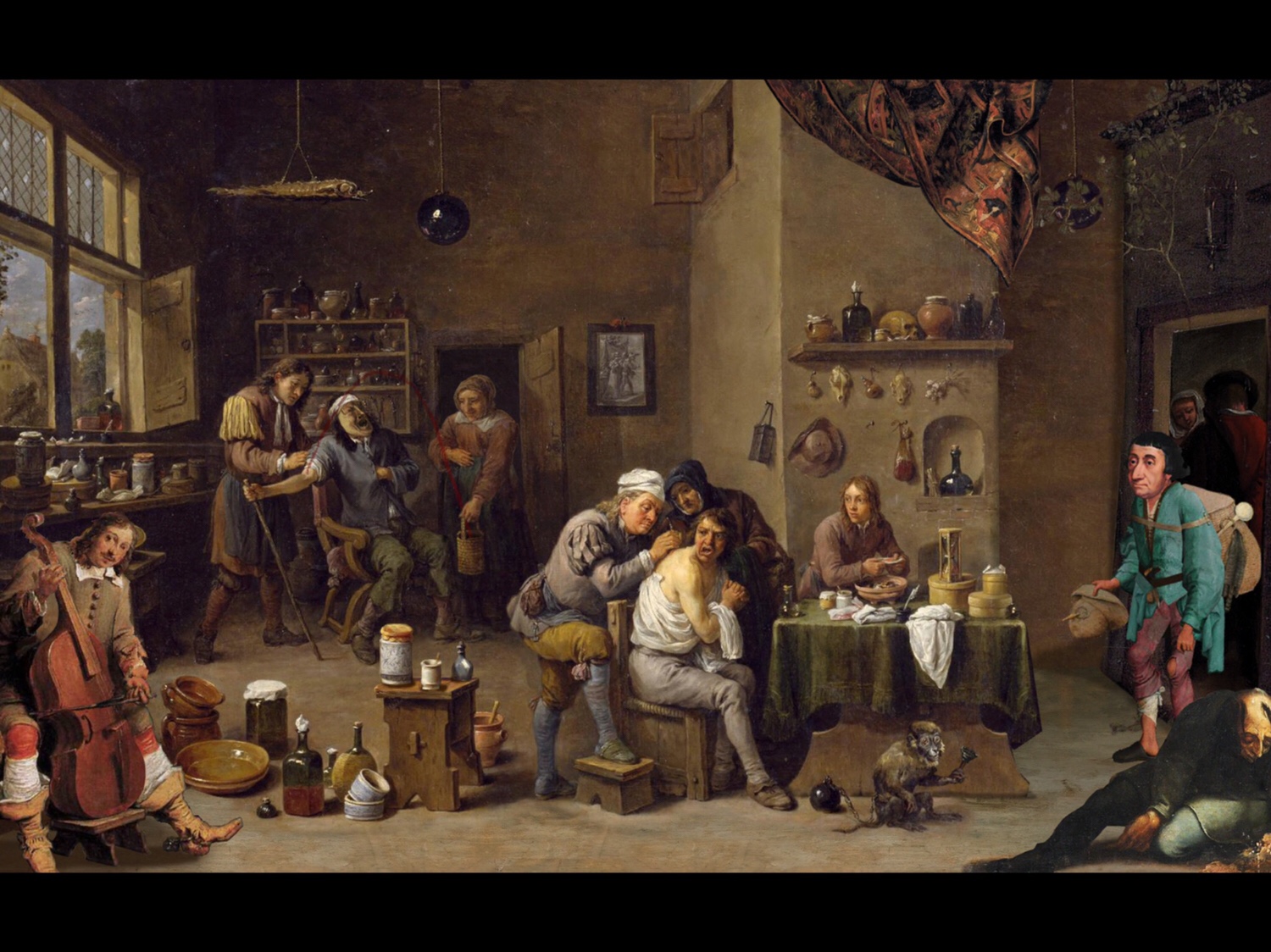 In case you didn’t know, the name Four Last Things represents Death, Judgement, Heaven and Hell, and I’ll let you discover how those tie into the game. I will say that I loved the ending and thought it was clever, but would also be thrilled to see a sequel that picks up where it left off. The game achieves exactly what it sets out to do and the point-and-click genre is the perfect outlet for it. I hope we see at least one more game like this from Richardson, as he did a fantastic job with it and all I can ask for is more. Well, that and voice acting. The only real sin would be not playing the game, so be a good little boy or girl and grab the game here. 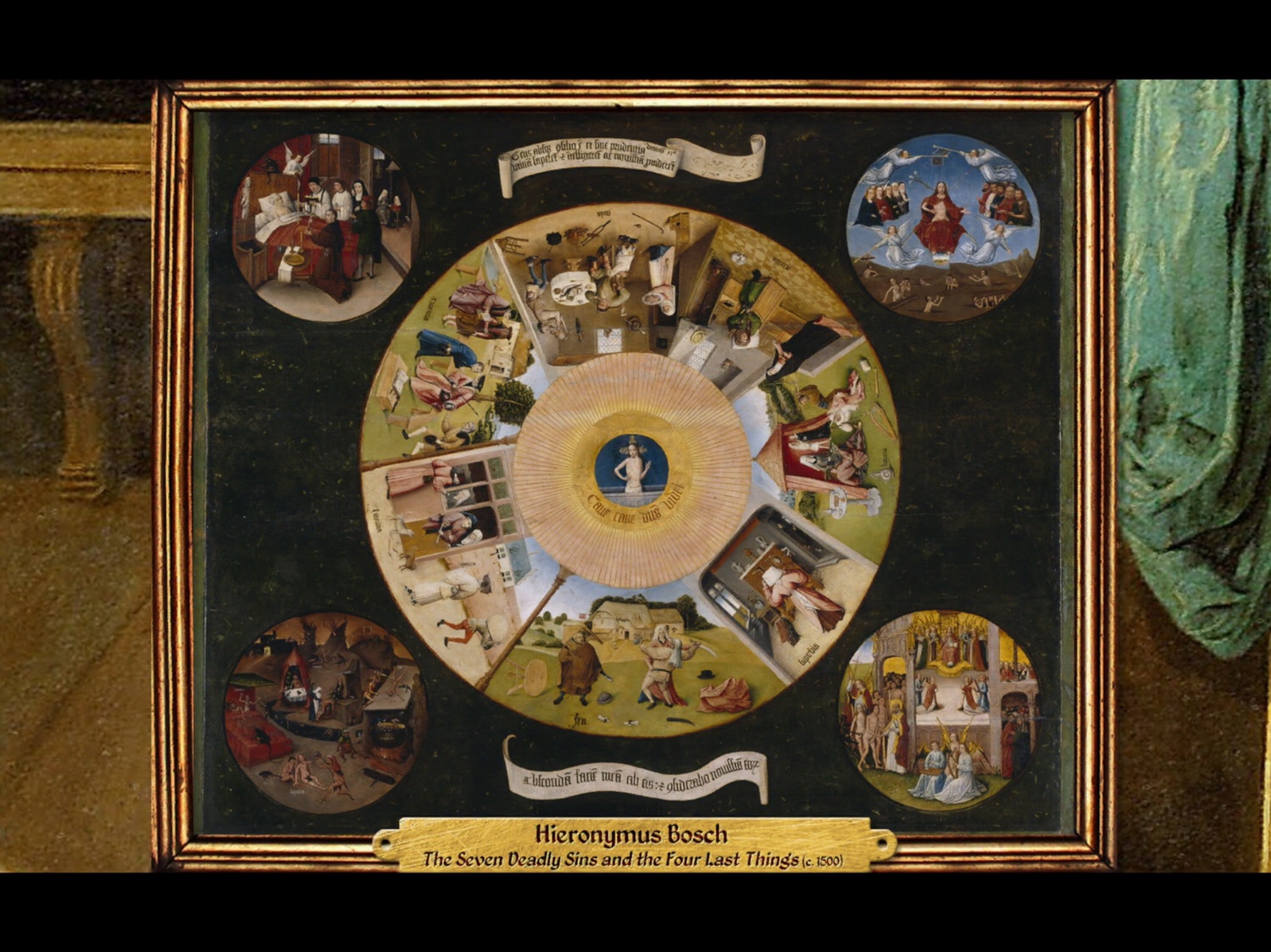 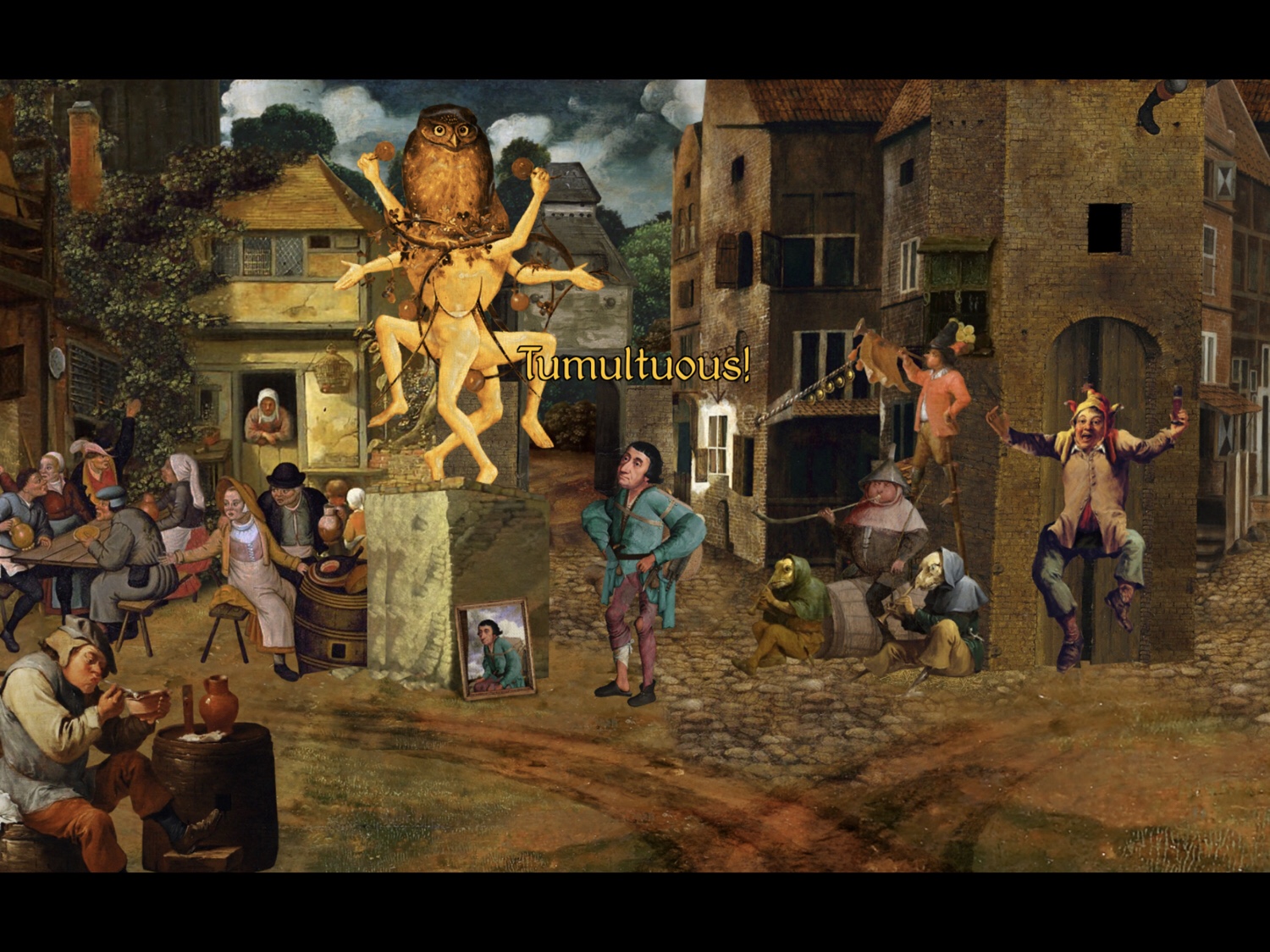 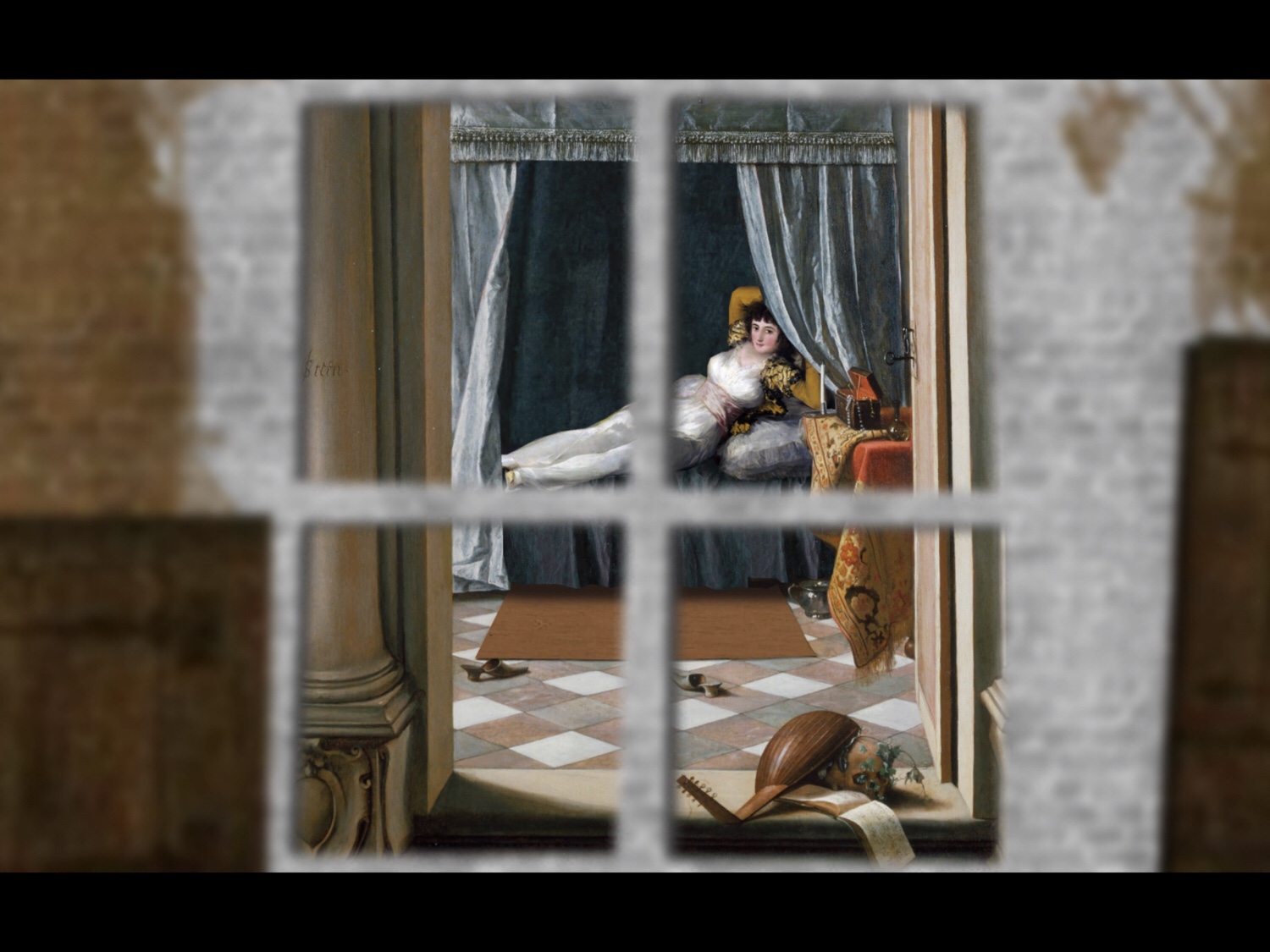 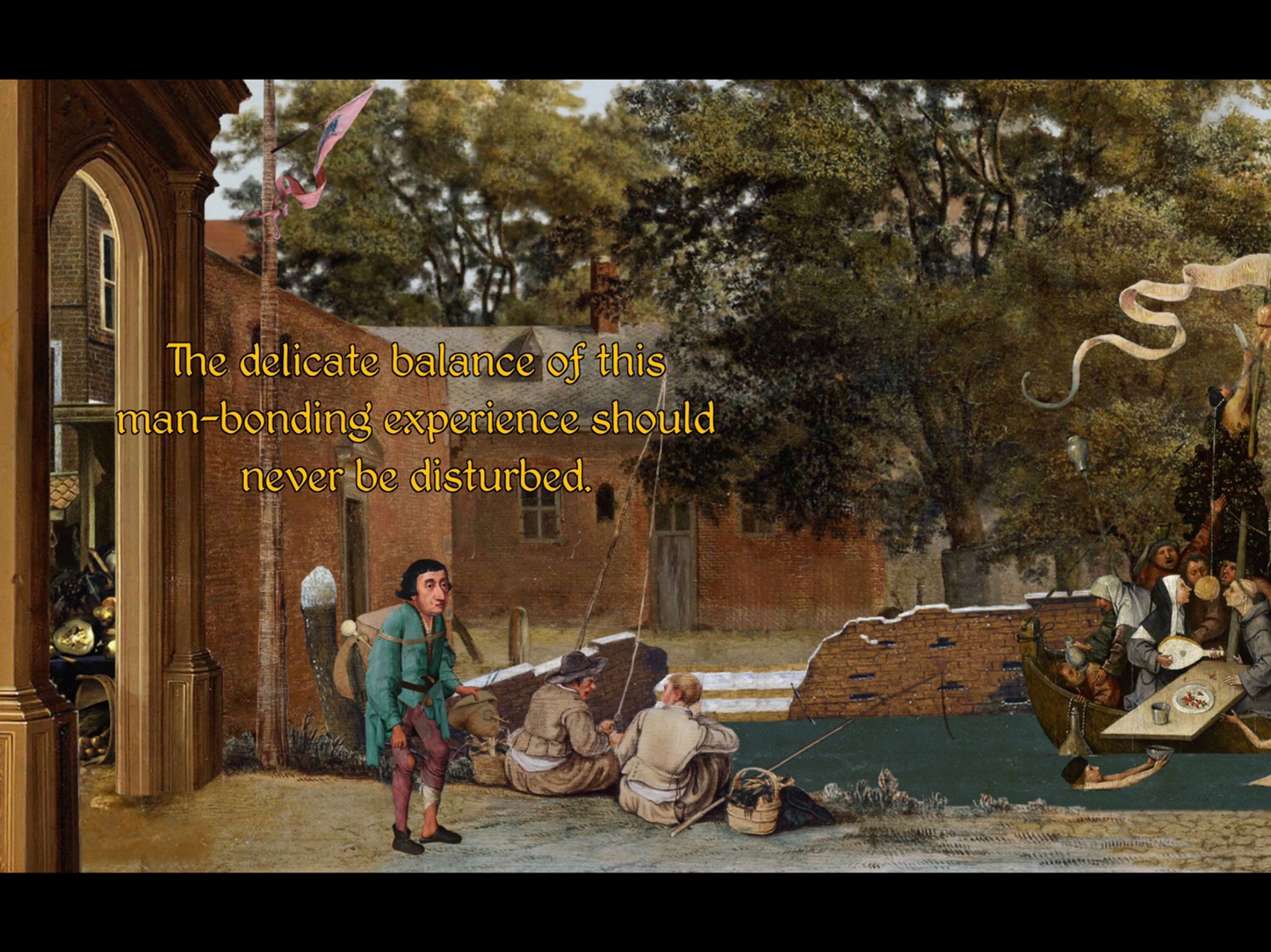