I spent so much time playing Asmodee Digital’s solitaire card game, Onirim, in 2017, and it made me eager to seek out other games that are accessible and easy to play at any moment, but that require some tough choices weighing risk versus reward. Slothwerks’ Meteorfall: Journey is the latest of these games and it combines the binary decision-making of Reigns with dungeon crawling.

In Meteorfall, you start your journey by selecting one of four characters — Bruno the warrior, Mischief the rogue, Greybeard the wizard, or Rose the healer. You then choose a starting dungeon, such as the crypt, desert, or swamp. What differs mostly in each area is the boss you’ll encounter at the end. This is a game of binary choices, so before each battle, you either swipe right to fight the monster or left to skip the battle and heal a bit instead. By skipping it, you miss out on experience, so you only want to do so if you’re likely to die otherwise. I’ve played a lot of games, and I’ve only chosen that option a handful of times, but it’s still a valuable one. 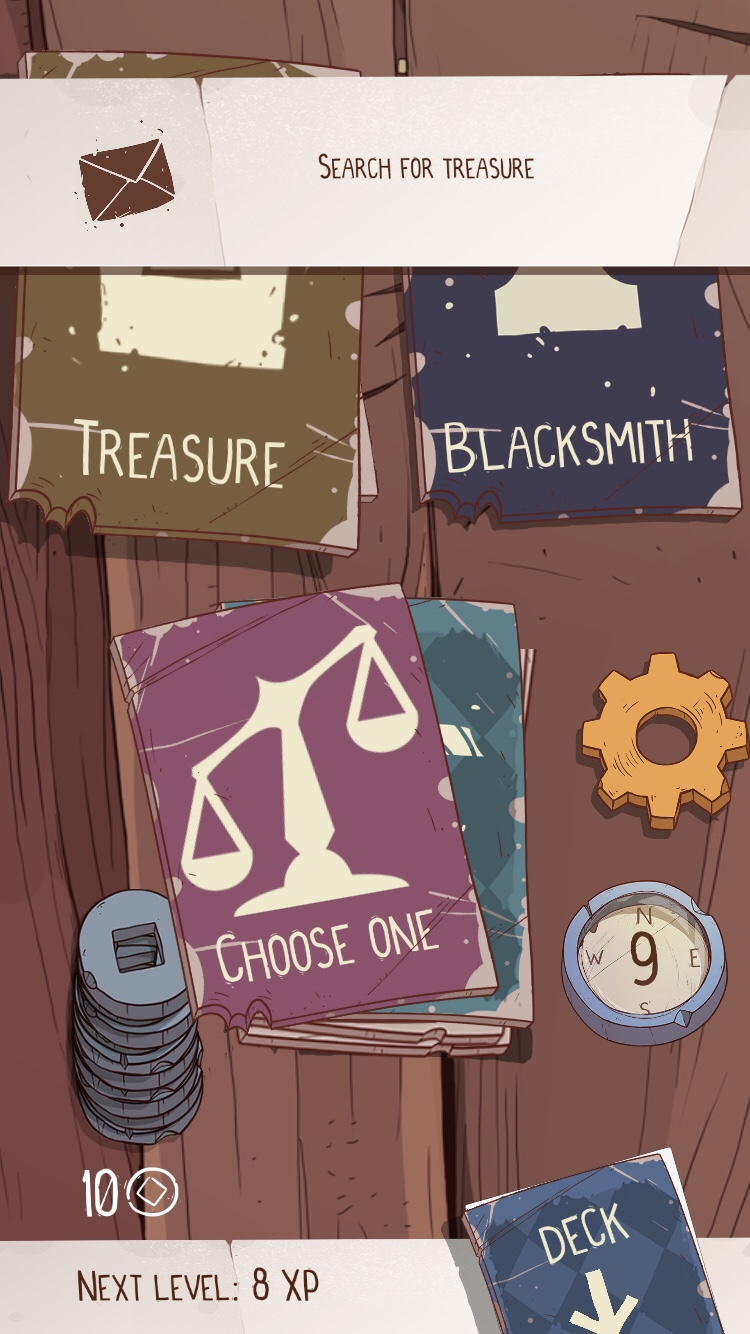 Within each battle, you and the monster will alternate turns. But each turn, you have a set number of moves, or card draws. During your turn, the top card of your deck is shown to you and you can either swipe right to play it or swipe left to put it back into the pile and gain four Stamina. Stamina is what allows you to play cards that require stamina. Not all do, but running out of stamina with any character can seriously cripple you. That’s because the other number you have to worry about is your health. If it hits zero, the game’s over. No second chances, no extra lives, no ads to watch for a continue. 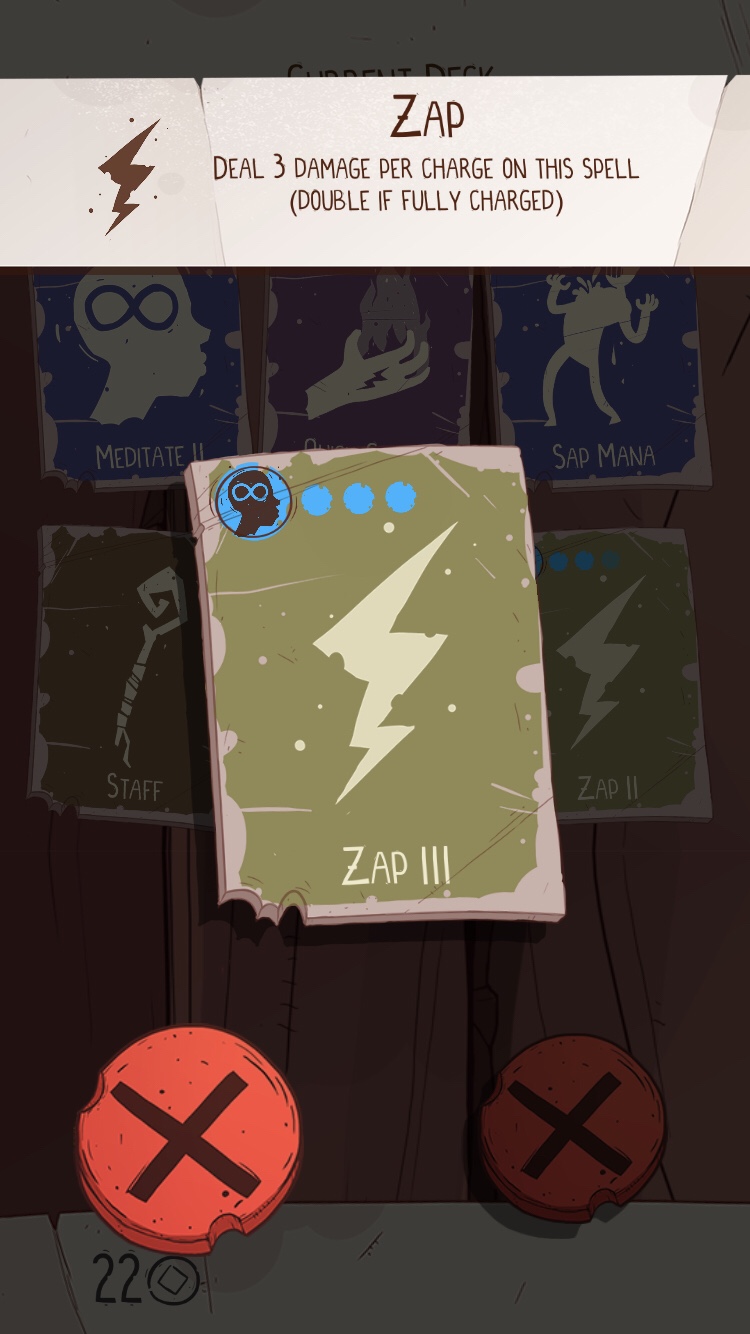 If you defeat a monster, you’ll get some coins and experience points and maybe level up, which gives you a bit more health and stamina. Certain levels will also give you the option to gain more health or stamina. There are also random events in between some battles, offering you a choice between two cards, one of which will be added to your deck. Other random events include the choice between resting or visiting the blacksmith, where you can spend ten or fifteen coins to upgrade a card. Or you might have the option to choose between a treasure chest of cards or the temple, which allows you to remove a single card from your deck permanently. Occasionally you might meet a witch who offers to transmute your card into another random one, while some other passerby can either clone one of your cards or take it for themselves. 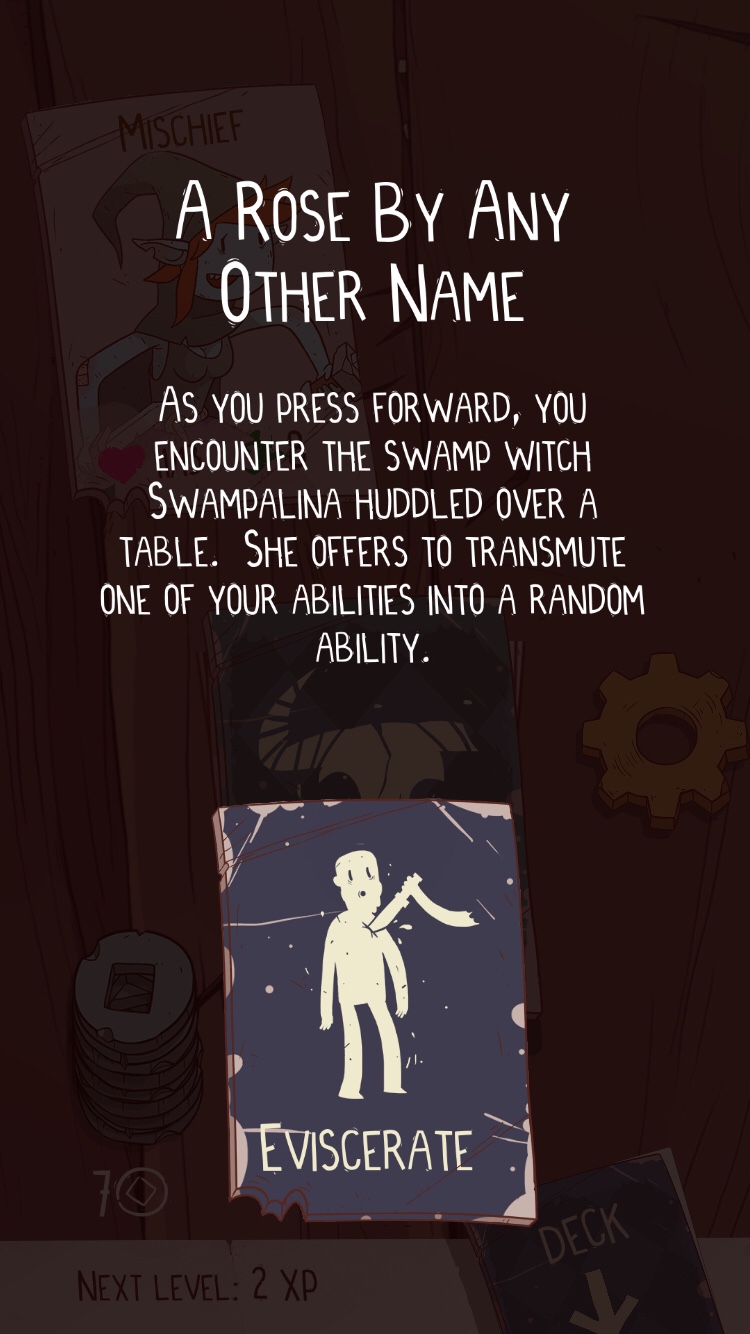 But besides all these random encounters, you’re fighting one monster after another until you meet a boss. This is a high score chaser at its core, and you gain 25 points for each boss you defeat. On top of that, cards you find in chests or the shop will all be level two after you beat the first boss, and level three after you beat the second boss. So if you make it that far without collecting too many weaker cards, you can get stronger ones without having to use your coins to upgrade them. And since coins also give you points at the end of the game, this can make a huge difference if you’re competing on the leaderboards. All games end after you kill the Uberlich, so the only difference in score at the end will be the coins you managed to save up. 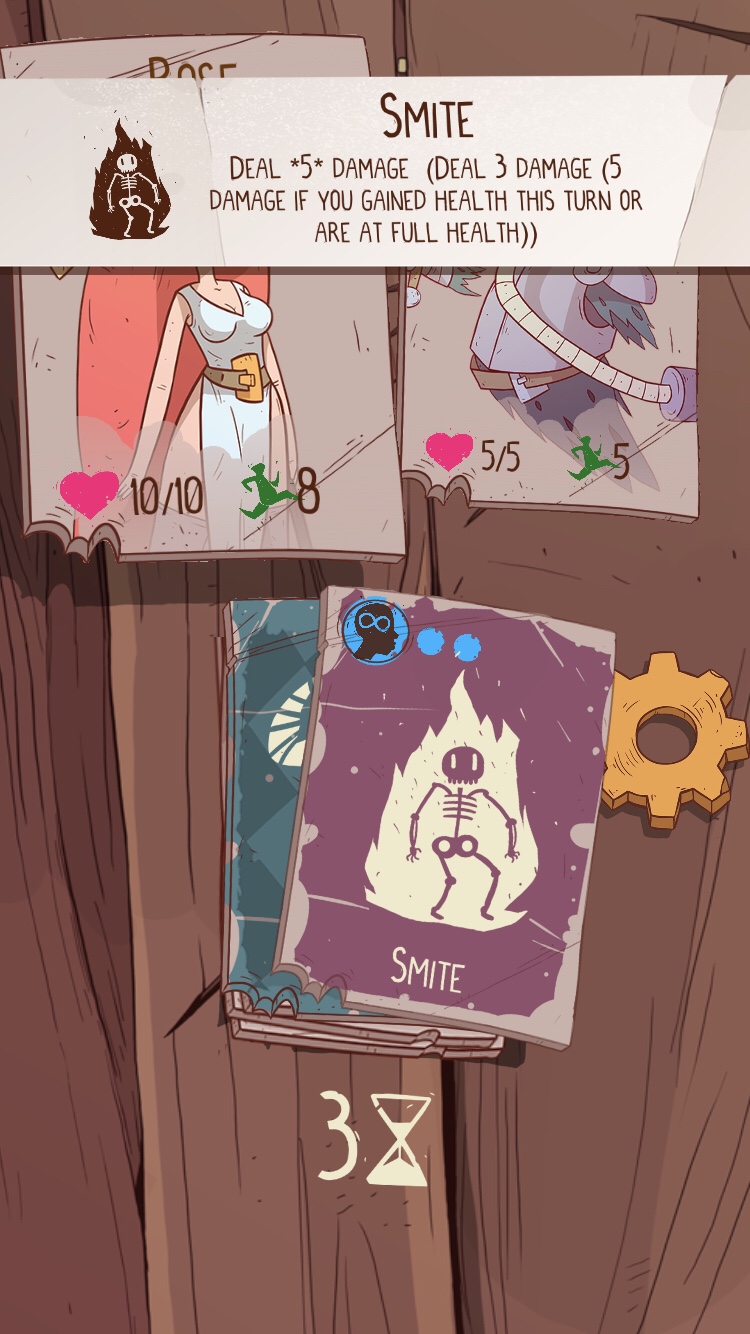 Each character comes with their own special deck of cards that you’ll be cycling through as you fight monsters. For instance, Bruno mostly attacks with his sword and defends with his shield. I find him the hardest to master and I haven’t beaten the game with him yet. Mischief has weaker attacks that give her extra moves, so she can get a few small stabs in before the enemy has a chance to attack. I haven’t beaten the game with her, either, but I’ve gotten closer than with Bruno. Rose, the healer, was the first character I used to complete the game. Her attacks aren’t super powerful, but she has healing magic that makes her a safer bet while you’re still learning the ropes. Magic cards also work differently than other cards in that they have charges instead of a stamina cost. You need to use other cards to recharge them or they’re useless, no matter how much stamina you have. Greybeard, the wizard, also uses magic, though his is primarily offensive. He’s my favorite character at the moment, giving me a high score of 290. He has powerful spells, especially once upgraded, but there’s nothing in his starting deck that can defend or heal him, so you have to play it careful until he’s gotten some new cards and upgraded his old ones. I’ve lost many games with him because I took too many risks in order to try and keep my deck lean and save coins.

And that’s where the strategy comes in. There is a lot of random luck in Meteorfall and, just like with Onirim, each move you take is a risk. Do you rest when you know you’re going to level up after the next battle and get a full heal anyway? Or do you visit the blacksmith so you have a better chance at taking down your next enemy? Do you take a card that’s useful now but will water down your deck later? Do you spend your coins on upgrades or try to hoard them for a higher score, risking losing altogether? It’s very much a game about risk and reward, and it feels perfect for short sessions waiting in line at the grocery store or longer sessions in bed right before you go to sleep. The game also saves your progress, so you don’t have to worry about playing through the whole thing in one sitting. 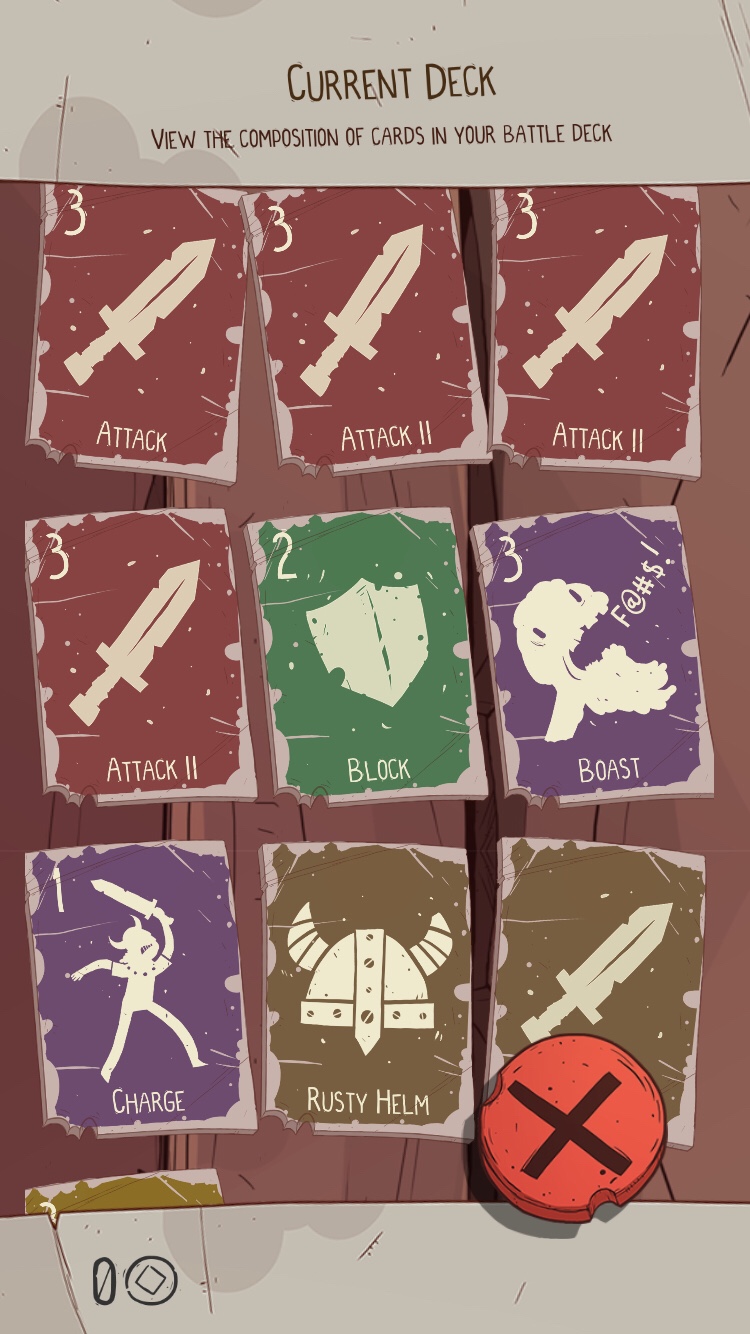 Despite my love of the game, I do think there are some balance issues. For instance, a card called Mind’s Eye costs nothing to use and restores charges on a few random spells. Whether you manage to get it is mostly based on luck, but it can make a huge difference between dying and surviving. Since there are no IAPs, no ads, and no way for anyone to buy the card outside of playing, it just means the magic characters have more of an edge than the others. But all players have an equal chance at drawing those cards. It’s an equal playing field. 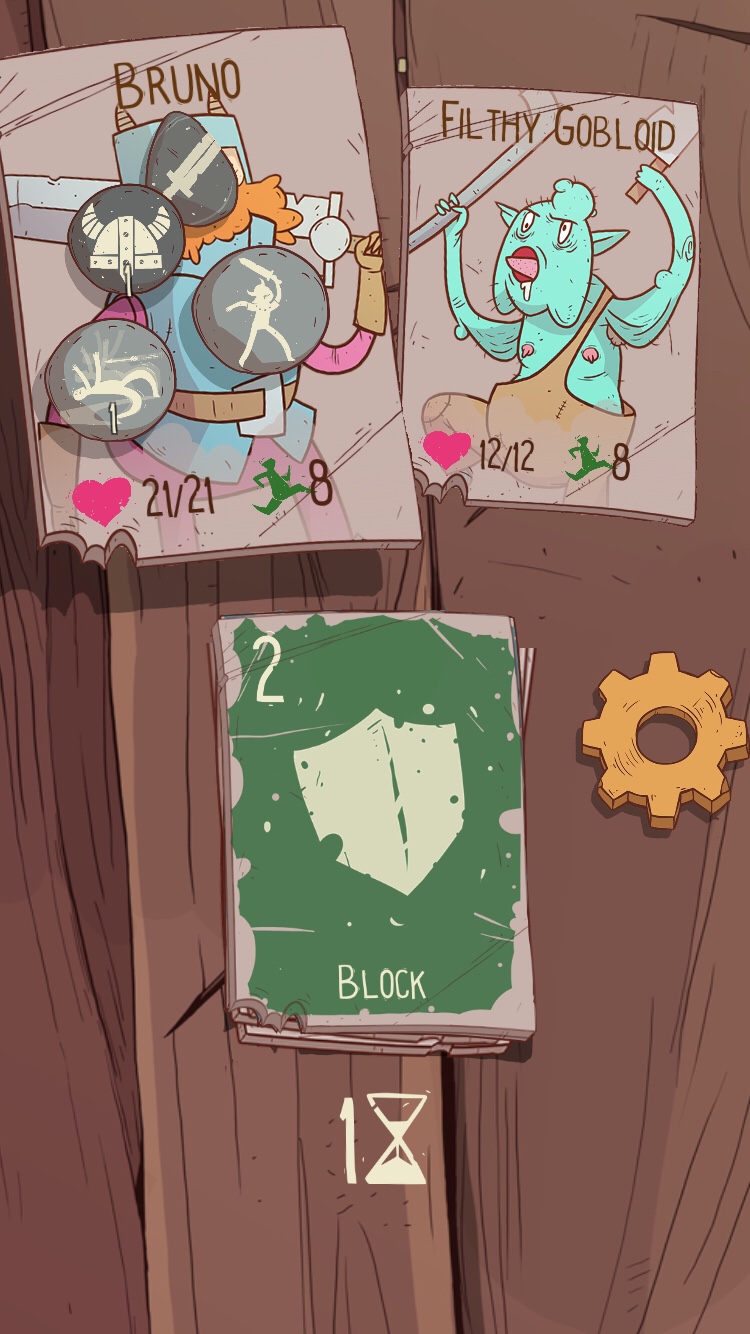 I also like that there isn’t even much grinding, as just a few games should be enough for you to earn gems to unlock some of the bonus cards. Each character has three cards you can unlock for one hundred gems each, and they replace the basic attack cards you would normally start with. Once you unlock all twelve cards, there’s nothing else to worry about but playing and trying for a high score. There’s no grind to artificially make the game last longer, and I appreciate that. It respects my time and my intelligence. 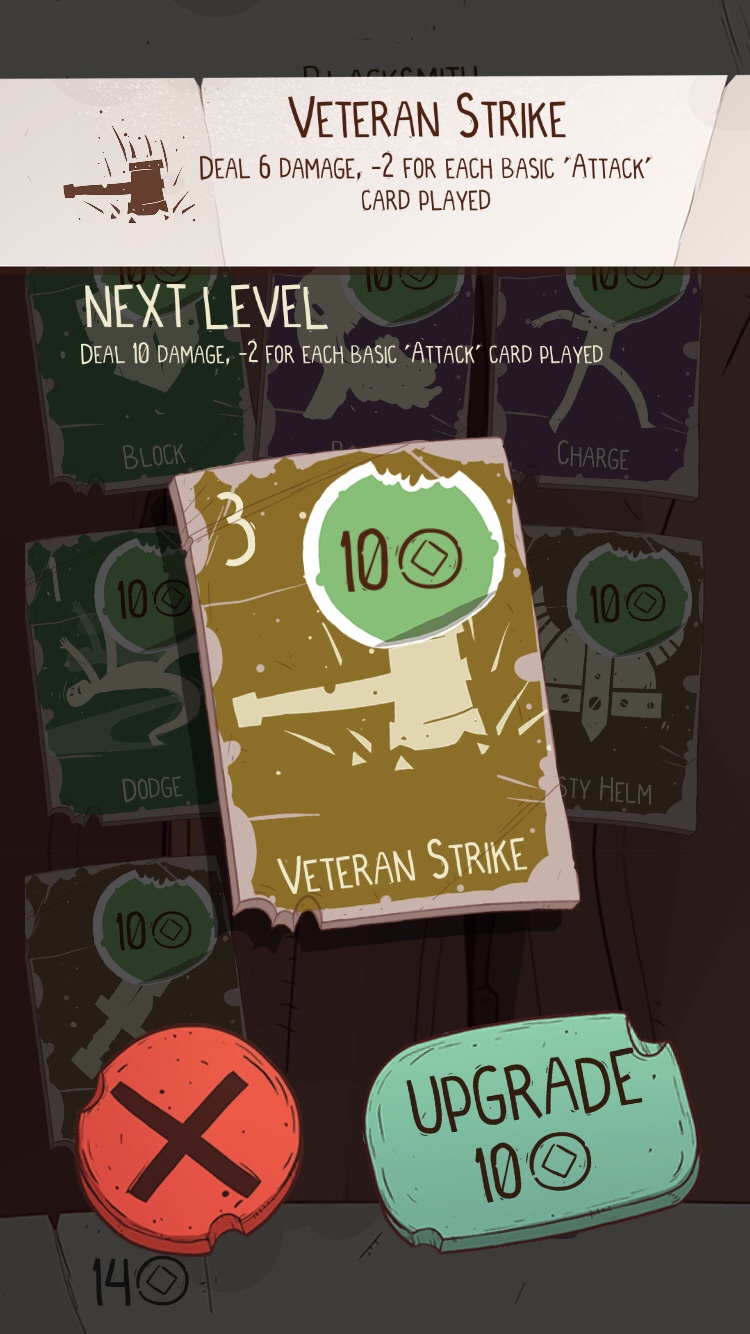 That said, I wouldn’t mind seeing a true endless mode, because it kind of sucks to have built up a strong deck and character just to have to start over after you defeat the Uberlich. I wouldn’t mind some separate mode that lets you keep fighting until you die and scores you on only the number of enemies killed. I would also love to see more characters added, but since I’ve yet to beat the game with half the adventurers currently available, I still have plenty to work on till then. Overall, Meteorfall is a solid addition to the solitaire roguelike deck-building genre, which has become a thing primarily thanks to Tinytouchtales. The Tinder- and Reigns-like binary swiping system works really well for dungeon crawling and I’m actually surprised no one’s done it sooner. It makes for an accessible game that anyone can play, but those who want to get competitive can delve deeper to find the best strategies to get a high score. I can’t really imagine anyone not having some fun with this game, if for nothing else than the playful artwork and punny monster names, like the Kooltist. Quite simply, Meteorfall is an easy recommendation for just about anyone.
So what are you waiting for? Grab the game here and swipe right to fight!