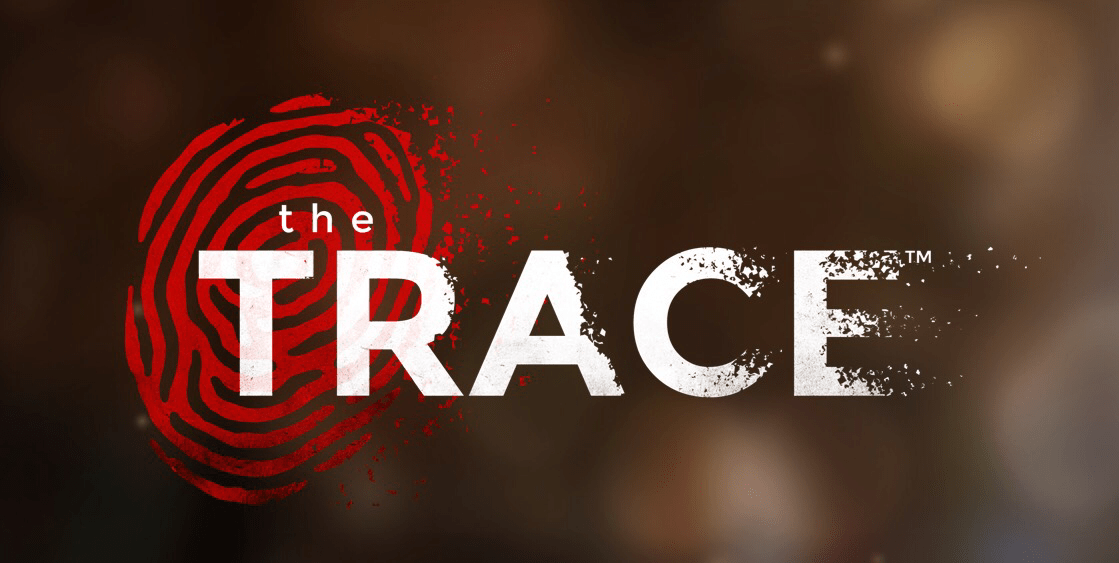 The Trace is a new 3D murder mystery game for iOS devices by Relentless Software, the folks behind Murder Files. Their experience with whodunnits has led them to create a really satisfying adventure game that feels perfect for touchscreens.

You play as detective Sam Pearce, called in to investigate a suspected suicide at a garage. Your task is to walk around the fully-detailed 3D environment and search for evidence to help you solve the case. Everything is gesture-based, so navigation is pretty straightforward. You can swipe the screen to move the camera around, then simply tap on something of interest to zoom in on it. This will usually give you a “lead,” which is either a question or a clue that can help you answer the questions. When you’re done, simply pinch the screen to zoom back out. It all works beautifully with a touchscreen, especially the iPad Air 2. The game was still very playable on my iPhone 5, but I did find things to be a tiny bit cramped. If you have the option, I recommend playing on a bigger screen. 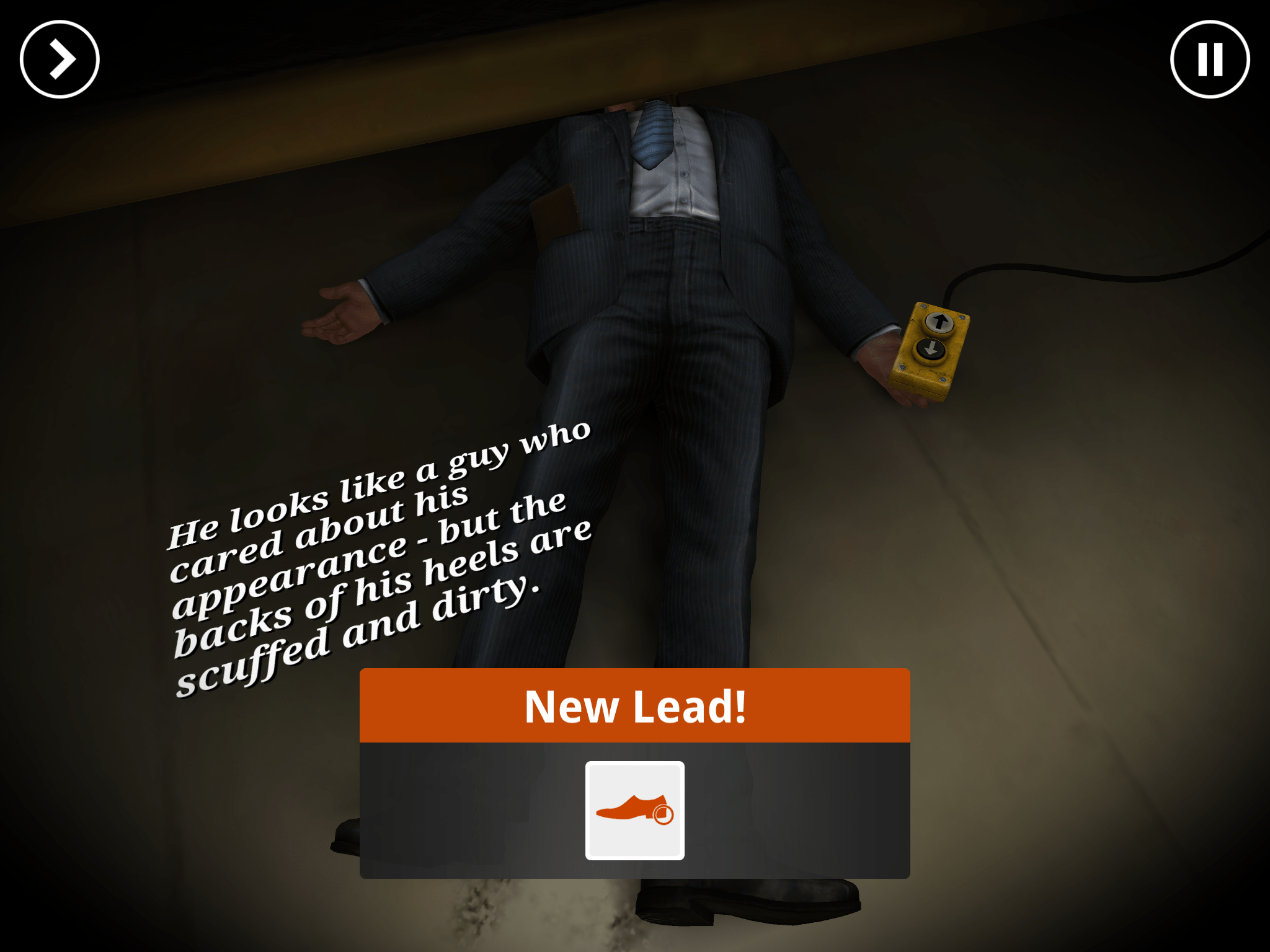 While you explore, you’ll also find objects that can be be picked up and examined, like in The Room. These items can be scanned for fingerprints, blood types, and other important clues by simply tapping and holding the spot you want to scan. You then send this information via a remote forensics uplink to your partner, Alex Price, who’s in the lab but always just a phone call away. You feed her any data you find, and she uses it to provide other information you would need. It’s a pretty interesting concept, and one they’ve taken a bit further by creating a blog that’s supposed to be written by Alex to explain the remote forensics technology. I suggest reading through the blog if you want to learn more of the backstory to the characters, as the game focuses more on the victims than on the investigators. 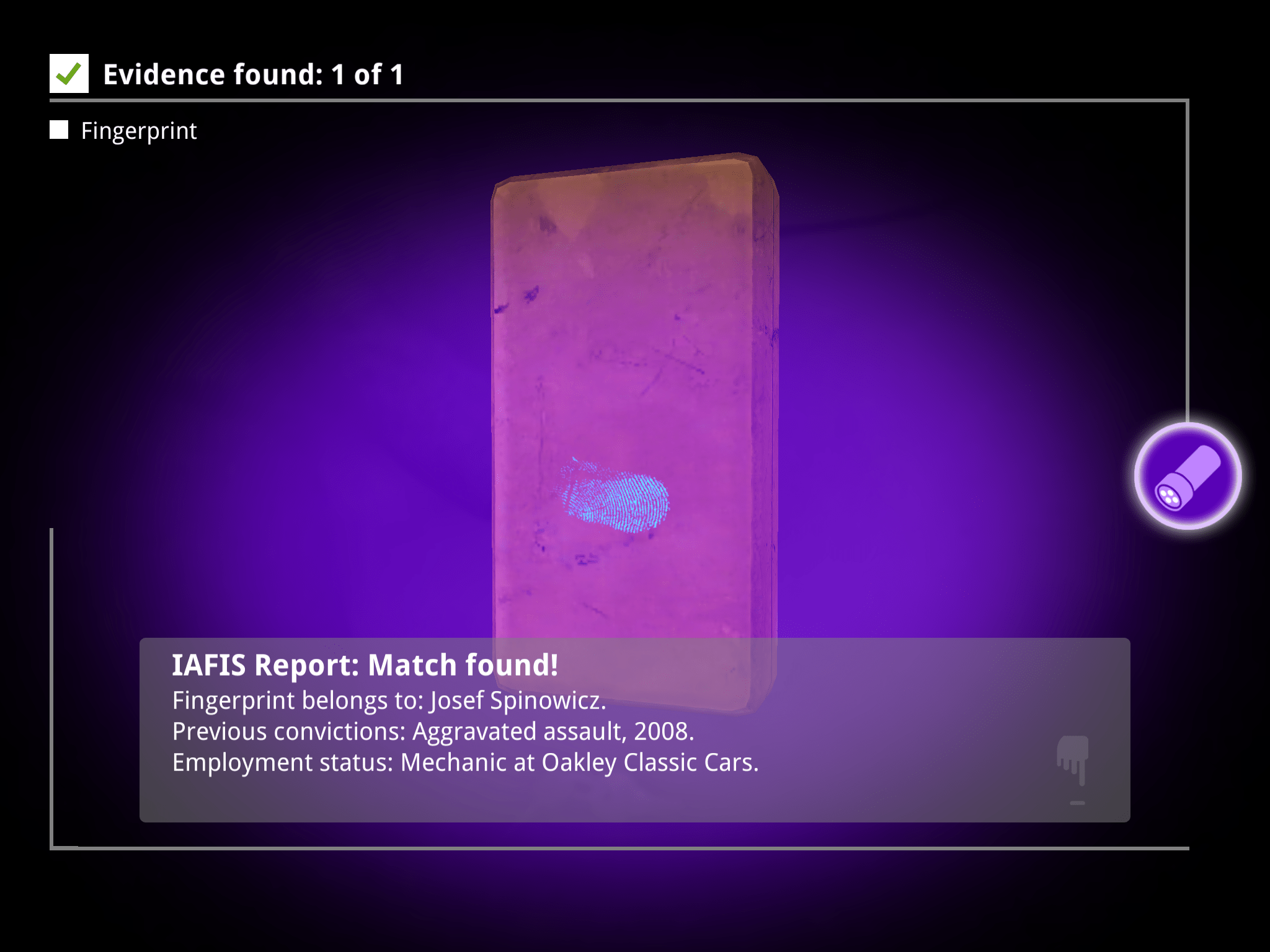 The dialogue feels natural, never cheesy. It isn’t a lighthearted game with tons of jokes thrown about like Murder Files, but it’s also not overly serious or grim. I think the tone hits just the right spot, keeping the game from getting too gruesome or realistic. I doubt anyone will be getting too emotional over these characters dying. Mostly, you’re here to do your job and solve the mystery — not ruminate over the brutality of death. There’s also no voice acting, in case anyone might be expecting that after playing Murder Files. I didn’t really miss it, though, as it didn’t feel necessary in this game. It’s more of a relaxing explore-at-your-own-pace type of game than Murder Files was, so the music and sound effects were all the audio feedback I needed. 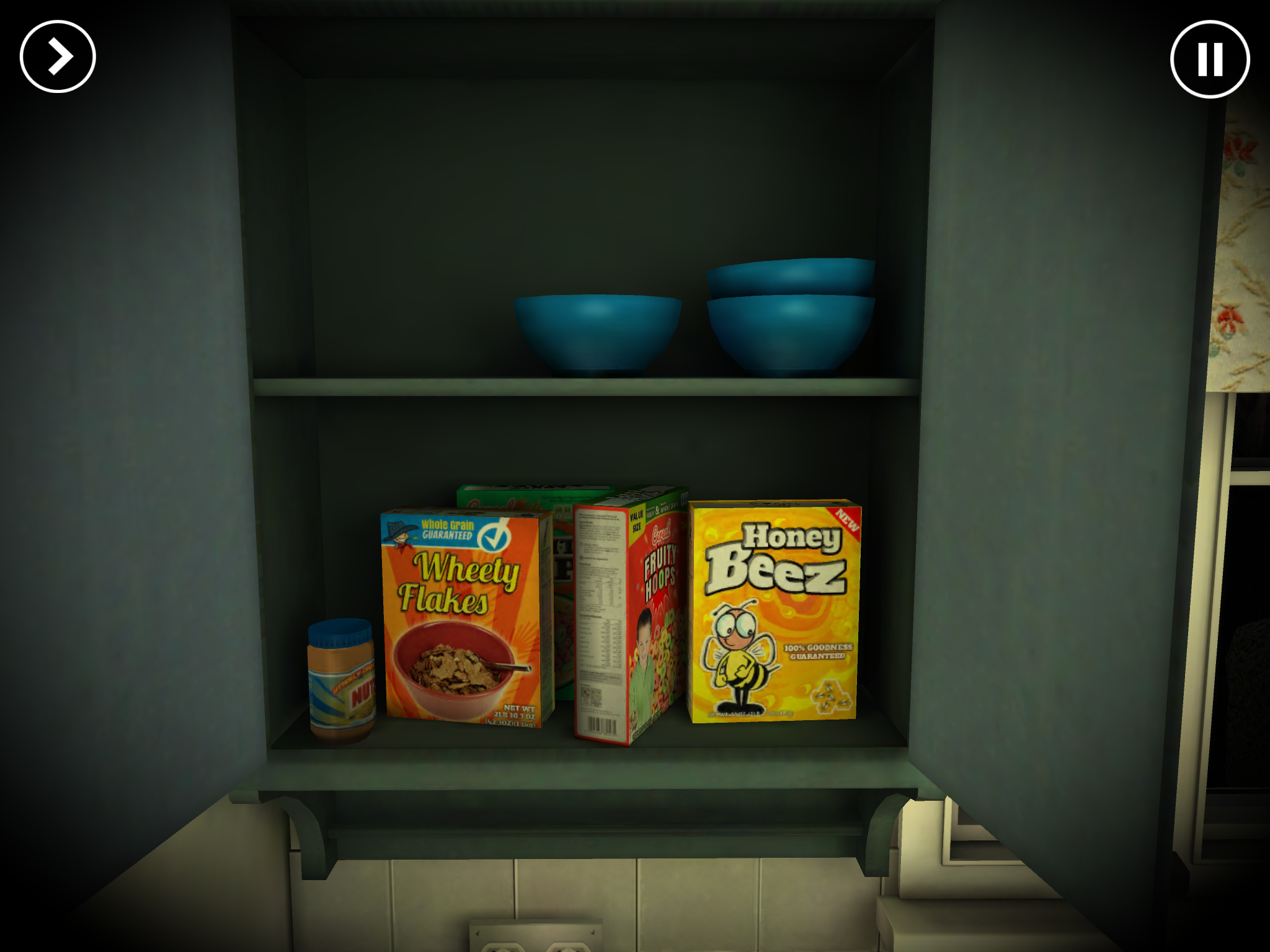 Let’s talk a bit about that soundtrack. They did a superb job with it, as the music is suspenseful and atmospheric at the same time. It’s spot on and gives that air of mystery, without getting stale, boring or irritating. It was always welcome and helped pull me into the game without being distracting. I played through the full game four times already and I still haven’t grown tired of the music. It also speeds up when you make an important discovery, adding to excitement. I don’t think there’s anything more I could have asked for.

The Trace is basically what I was hoping Criminel would be. Everything I missed in that game is present here. You can rummage through drawers, closets, just about anything, to search for clues. While you can technically speed run the game in about an hour, a first playthrough should take much longer, as you’ll likely be searching every nook and cranny. It’s a rewarding experience, especially when you find that last piece of evidence that was eluding you. There are also some puzzles and mini games to solve, but they mostly consist of piecing together glass shards or ripped bits of paper. I wouldn’t have minded more variety and challenge with the mini games, but the current difficulty level makes the game accessible to more players. 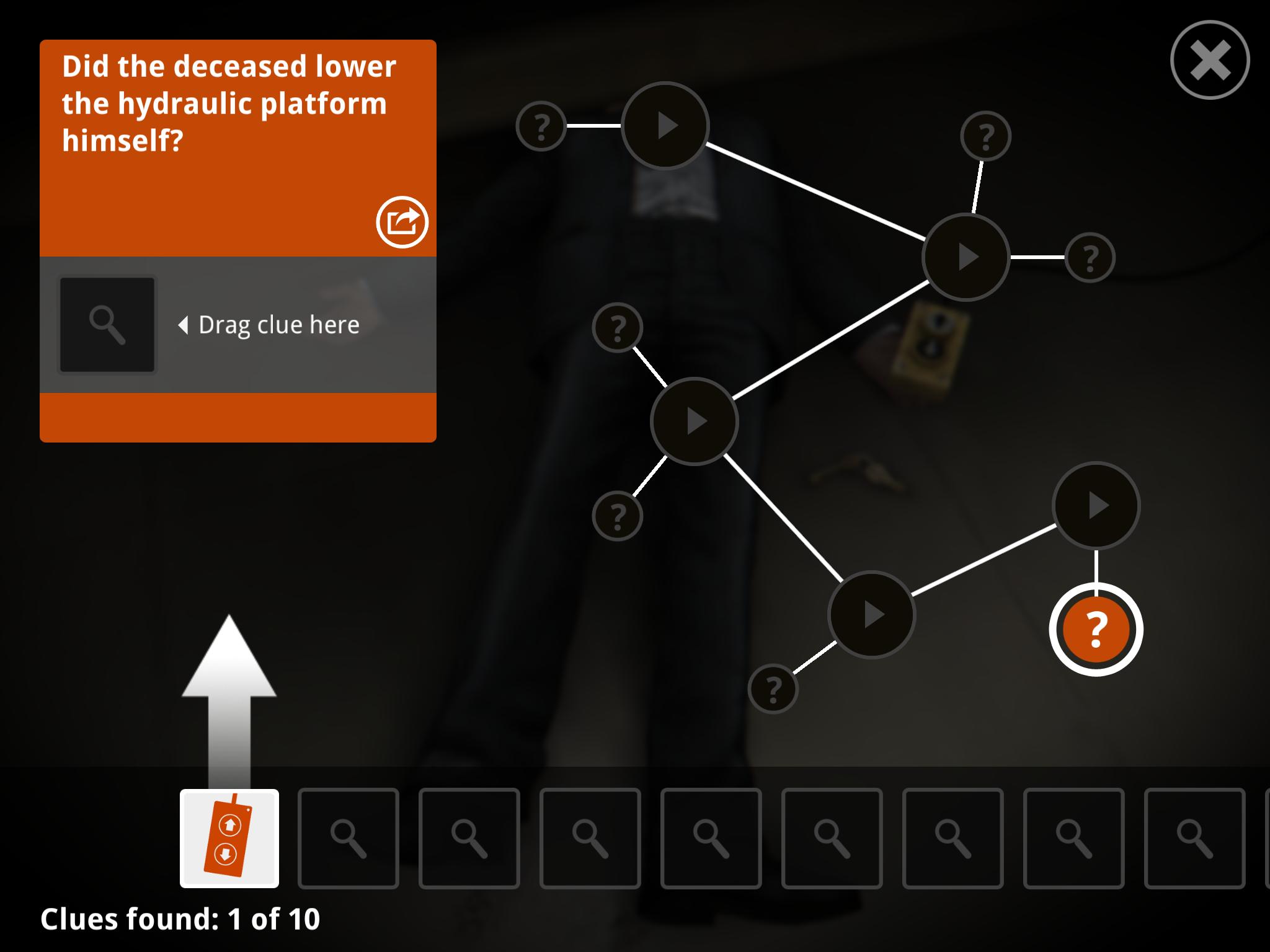 The Trace is a relaxing game, as you can take it at your own pace without any consequences. There are no timers or time-sensitive puzzles. It’s a murder mystery that’s a good fit for anyone who doesn’t mind a somewhat gruesome scene. There’s no hints system built in, and there were a few times where I might have been tempted to use a hint if it was there, but I managed to find all the clues in the end and complete the game without help. If you are at your wit’s end, though, there is a social share button, which allows you to ask for help from friends on Twitter. This is a neat, interactive way of doing it, and should also give the game some publicity. You can also try my step-by-step walkthrough if you get really stuck. 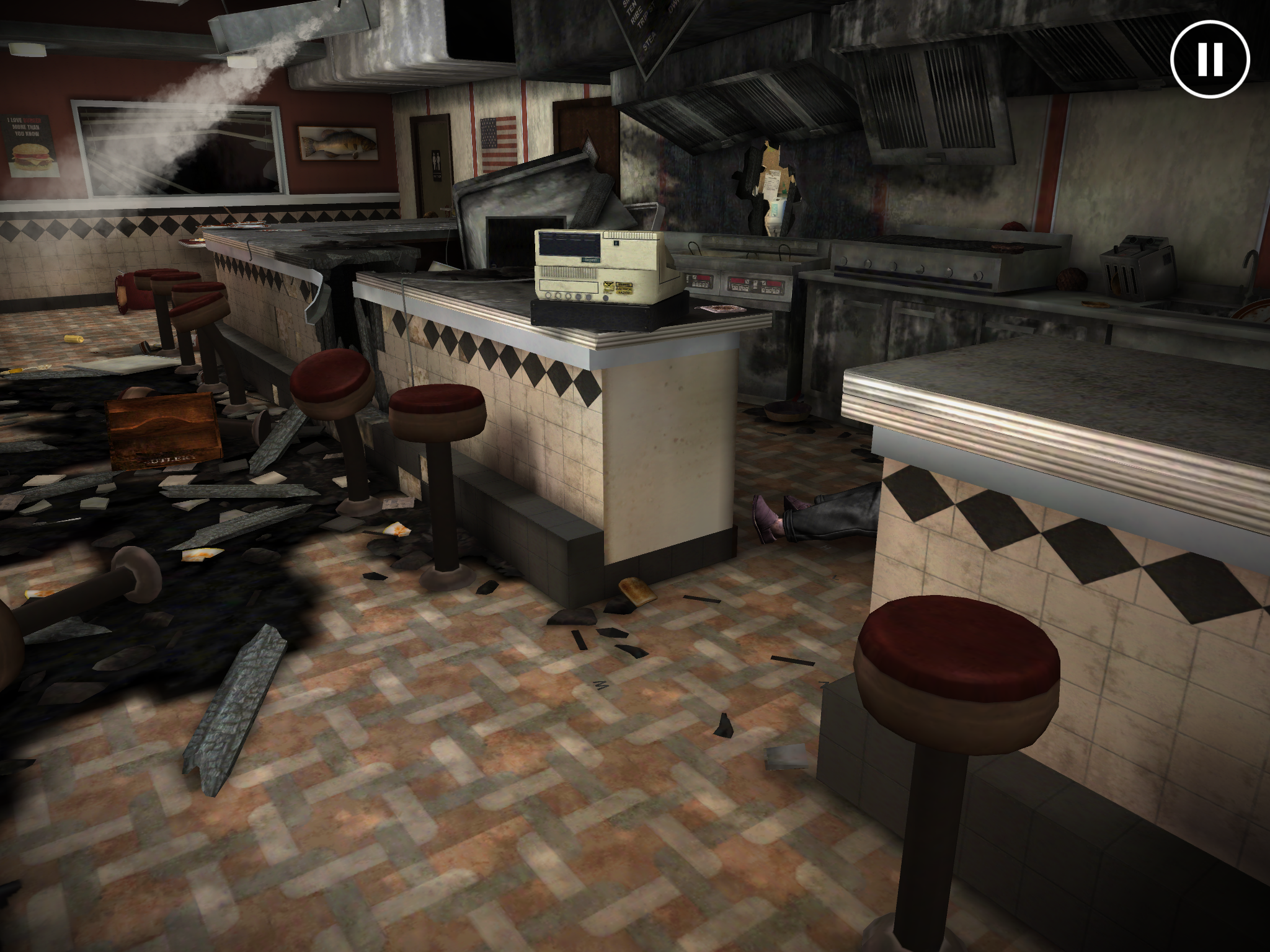 Once you’ve solved all the mysteries of the first crime scene, you move on to the next. There are three scenes in total, but they are all part of one overarching case. The first two locations are pretty tame for a murder scene, which makes the third crime scene all the more surprising and enjoyable. It also provides a bit more humor than the others, despite it being more intense. I think I actually laughed out loud when I first walked in there. I don’t want to spoil it for anyone, so I won’t say much more than that. But I can honestly say I did not see any of it coming. If for nothing else, I recommend playing the game to experience that scene. If you’re still not sold, you can watch this short video I made of the first couple of minutes of the game:

What The Trace sets out to do, it does really well. Some players might wish for more challenge, especially with the mini games. And I do think there might be room for that in a potential sequel. But the game we’re given is served in a nice, tidy package, and I think anyone who enjoys mystery games would have a good time with this.I would almost call it the Monument Valley of crime scene investigation. It’s a unique and fresh idea done really well, but I would love to see the difficulty ramped up in the sequel, if there is one. Unless you’re someone who absolutely needs your games to challenge your brain, I can’t think of any reason not to download The Trace. There are also no in-app purchases (IAP) whatsoever, so you pay once and get the full experience. If all this sounds good to you, give the game a try and download it here[DKB url=”https://www.appunwrapper.com/TheTrace” text=”Download” title=”” type=”” style=”” color=”green” width=”” opennewwindow=”” nofollow=””]

If you’re already playing the game and need some help, try my complete step-by-step walkthrough for The Trace.