One Button Travel
By: TheCodingMonkeys

Let me say this right up front: I haven’t played any of these “chat” games before, such as Lifeline or The Martian. I don’t have an Apple Watch, and I didn’t think the experience would be quite the same on an iPhone. But One Button Travel looked intriguing enough and the art style grabbed my attention. So I wanted to give it a try.

It immediately made me think of Simogo’s Device 6 with its mysterious tone and sense of humor. I was really enjoying it and it seemed promising. It starts with a big red button and instructions to push it (unlike another game with a big red button, called Please, Don’t Touch Anything). I don’t want to give too much away, but you soon get a message from someone who appears to be from the future. 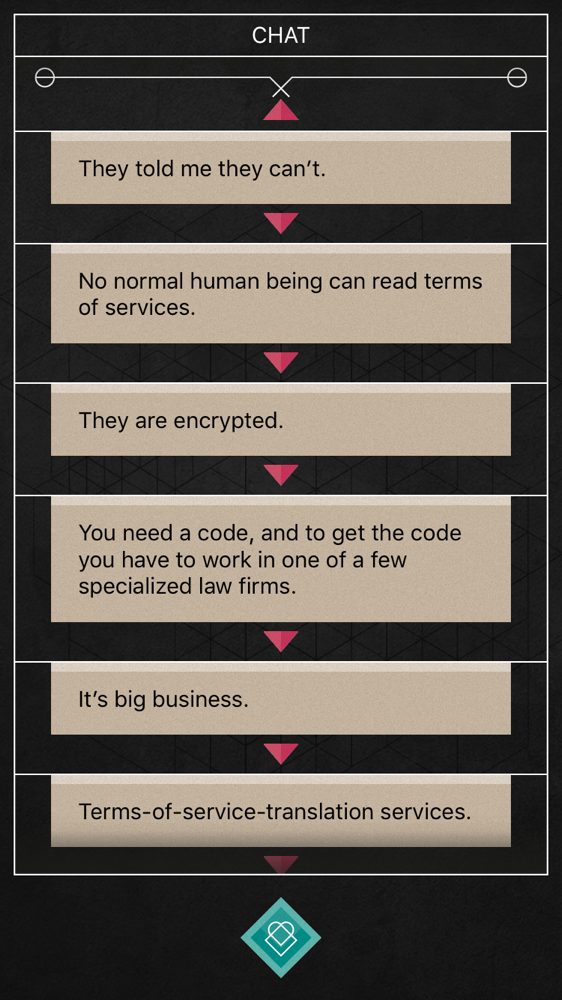 It’s a really interesting concept and I really wanted to love the game. Unfortunately, most of the time I was just pushing through to get to the end, not really enjoying the experience.

It’s all in real time, meaning the person on the other end takes breaks for a few minutes at a time or even several hours. During that time, all you can do is wait for another message to come through. Normally I wouldn’t let a game send me notifications, but for a game like this it makes sense so you don’t miss any messages. Also, they work it into the story nicely, instead of attacking you with the message right on launch. So I appreciated that.

The game has some great moments. There are little jabs at our own time period, as well as fun little things you might (or might not) expect to see in the future. For instance, there’s a running commentary on how hard terms of service agreements are to understand. I’m sure iOS users are all too familiar with this concept and would appreciate the humor. Unfortunately, these moments are fluffed up with a lot of filler that doesn’t do much for the game and causes it to drag. The app description boasts 55,000 words, but I think it could have used a hefty amount of editing to get rid of a lot of the fluff, both to keep it interesting and more realistic. 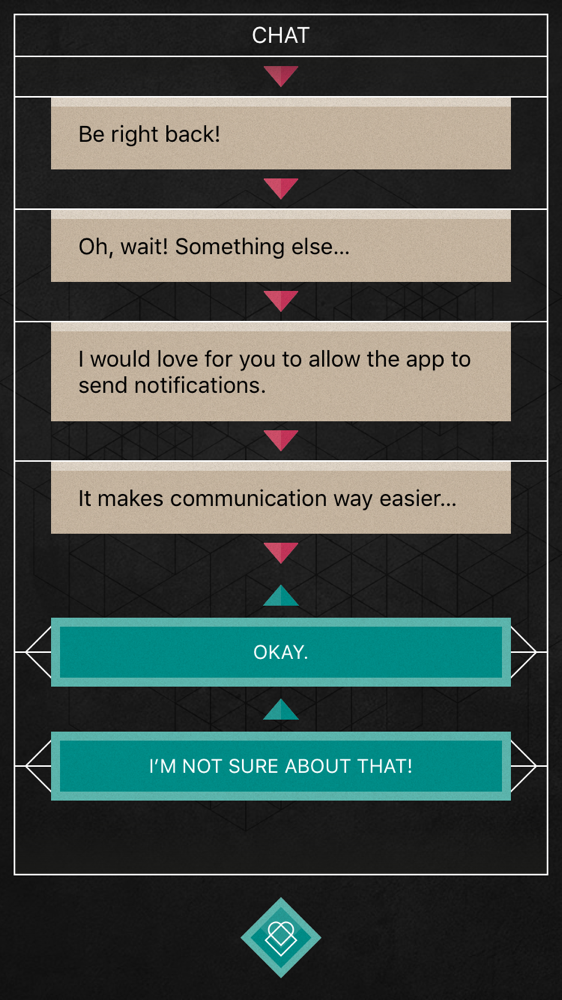 One reason it didn’t feel realistic to me is that the person I was chatting with told me every little detail, even as it was happening. And then they constantly asked for my advice on what to do, even though they didn’t seem to have a reason to put any trust in me. Also, it never felt like my choices mattered much. If I gave them bad advice, they just did what they thought was right. So why even ask? Other times, choosing an alternate response just provided a few more lines of dialogue before getting to the other option anyway. It did make a lot more sense in the end, but not enough to explain their need to tell me every little move they made.

Also, the person I was chatting with would often disappear for lengths of time just after a critical moment, yet keep me updated constantly with minutiae that I didn’t really need to know. I think it was supposed to create some suspense, but more often it just made me forget about the game altogether. And if I ignored the messages for hours, when I finally checked them they still came in as though they were being typed on the spot, not hours ago. The messages weren’t just sitting there waiting for me like with real text messages. And the person would just wait to make a move until I answered, even if they were in danger. All these little things made it hard to get pulled into the story. 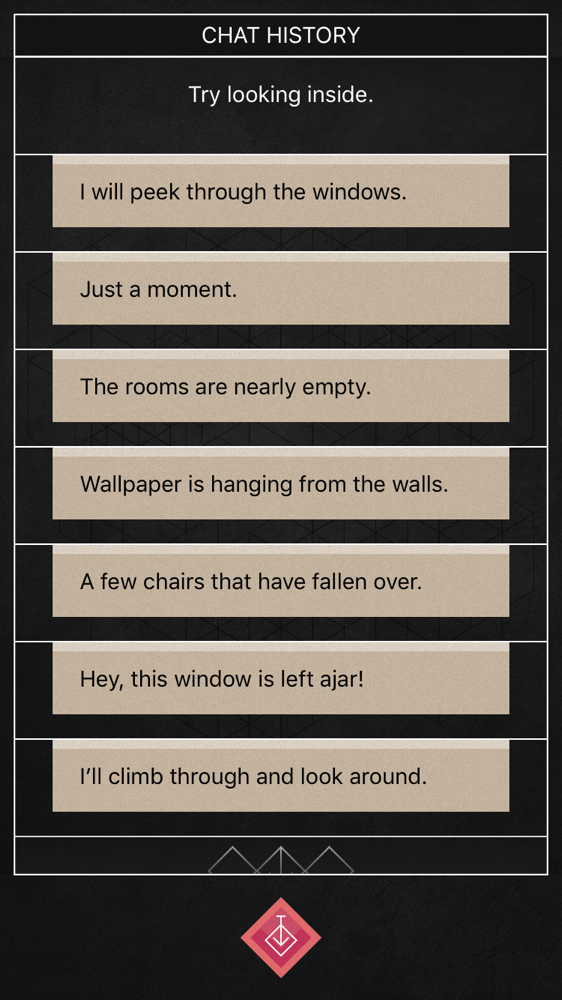 Besides that, the person on the other end didn’t feel like a real person. They didn’t have a personality. The game is all dialogue, but it’s inconsistent. Sometimes contractions are used to shorten sentences. Other times, everything is spelled out to make it as clunky as possible. And the same goes with my own dialogue options. Some examples are “I will pretend that I just woke up and be surprised that Mia isn’t there” and “Perhaps they did help Mia to escape?” Keep in mind, this person is chatting with me on a phone they’re not supposed to even have, with low battery, while on the run. I don’t need to see text speak like “UR L8,” but these long, drawn-out sentences took me out of the moment and made it hard to get sucked in. Even though it’s explained away a bit much later in the game, you need be immersed to stick with it long enough to see the explanation. I’m also not so sure it’s a satisfying explanation so much as an acknowledgment from the developer that something feels off. 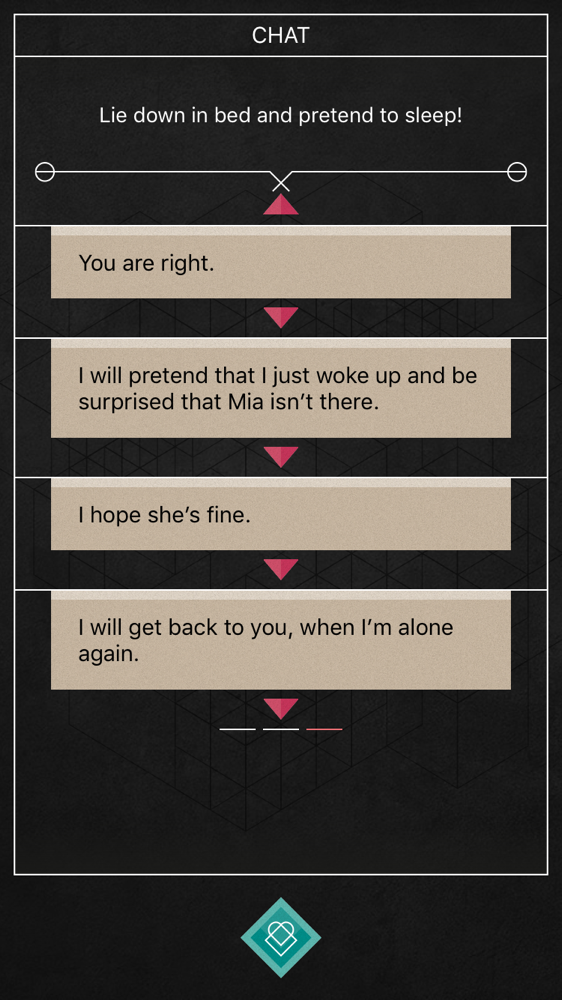 While the game is like a choose-your-own-adventure, I doubt too many people will play it more than once. The ending was clever and more interesting than a good chunk of the middle, but even that was a bit too drawn out for my liking. The breaks killed the suspension and I started getting annoyed with the person I was chatting with. It also makes it pointless to replay the game just to see what bits of dialogue I may have missed. I don’t get the sense that my choices had a huge effect on the game and that I would have gotten a drastically different story had I chosen some different dialogue options. I could be wrong, but I have no interest in playing through it all again to find out.

All that said, it’s possible I would have enjoyed the game a lot more if I had an Apple Watch. It might have felt more realistic if I got all the notifications on my wrist. Keep in mind, though, that the game doesn’t seem to have iCloud saves, as my iPhone progress didn’t carry over to my iPad. That also kills the immersion, as normally texts would sync between multiple devices. There is a lot to like here, but it’s not as great as it could have been with a tighter script and other small adjustments. If you can forgive the flaws and see the game through to the end, there are some nice bits and pieces along the way. You just need to slog through some big drawn-out sections to get to the interesting parts. If the game sounds like something you want to play, you can download it here.

You can also see this short gameplay video I made of the first few minutes of the game: