There are a lot of puzzle games in the App Store that feature basic cubes you swipe to move around a board. There’s so many that I mostly started to ignore them since they all look the same. I’m not really sure what made me give Stephan Goebel’s QB – a cube’s tale a chance. I think part of it was the portrait mode, but there was something else that beckoned to me and I can’t quite put my finger on it. Either way, it was cheap, so it didn’t require too big a leap of faith. But it turned out to be one of my favorite puzzlers released this year. And that’s saying a lot, because there have been quite a few big releases.

In QB, the controls are super simple. The only thing you can do is swipe to move your little black cube in different directions. One swipe will move it one space over, while swiping and holding your finger on the screen will make it roll in that direction until it runs out of space. You can’t really get simpler than that. And you might think that the puzzles would be too easy with such a basic control scheme. But you couldn’t be more wrong. QB manages to offer incredibly tricky puzzles by having tiles that react in different ways when you land on them. For instance, the first special tile you’ll encounter has a red square button on it. If you land on that tile, the tile in front of you will crumble to dust. So you quickly learn that the trick is to land on that button coming from a direction where there’s no tile in front of you when you land on it. Or, at least if the tile does crumble, it won’t prevent you from getting to your destination, the black tile. 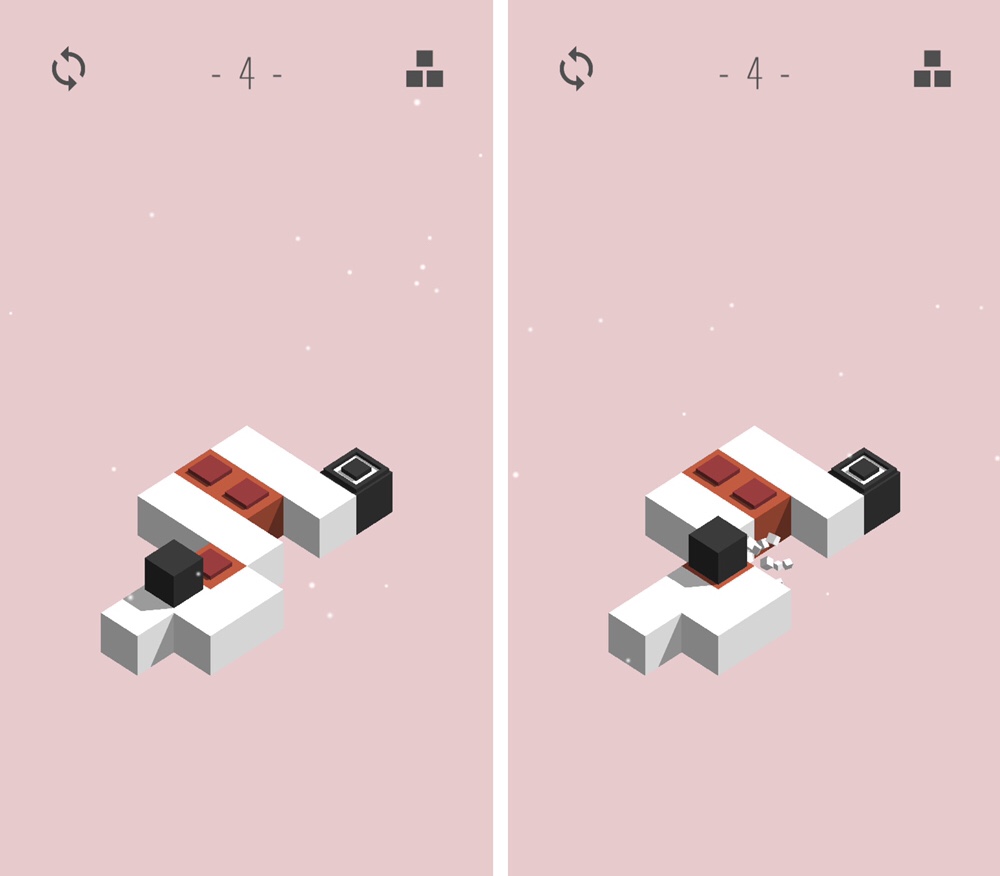 Soon enough, you’ll be introduced to yellow buttons that shoot lasers to destroy pillars that are blocking your path. Again, the laser shoots in the direction you’re facing when you land. So it’s not just about getting to the yellow button, but doing so from the right direction. It may sound easy, but there are always hurdles thrown in your way to make what seems simple a lot harder than it looks. There’s also a blue button that hurls you into the air, skipping over one tile. I don’t want to tell you every mechanic, as it’s fun to discover them yourself. But later, to mix things up even more, you’ll see tiles that flip over to another color when you step off them. Again, this is all done through simply moving your cube around and nothing else. 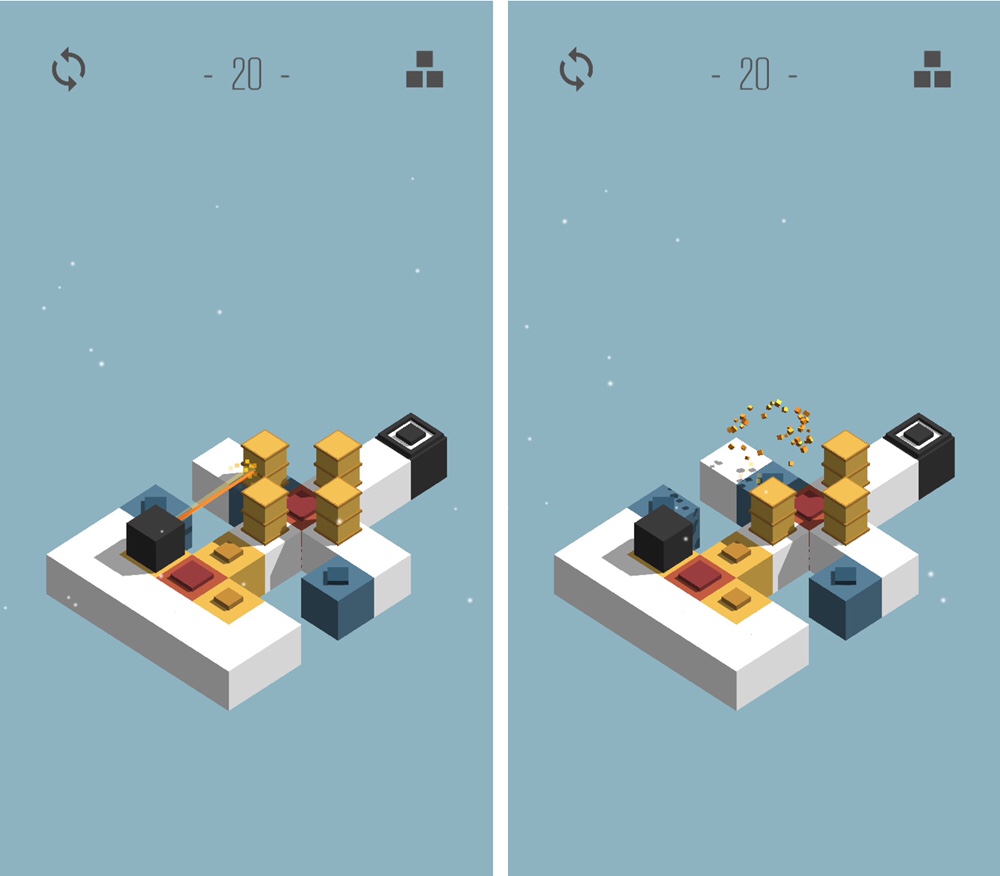 New mechanics are introduced at lightning speed and then combined with all the earlier mechanics so each level feels unique and challenging in its own right. Although there are only sixty levels in the game, there’s no filler. You’re thrown into the thick of things almost immediately, so your time is never wasted on easy puzzles. It’s exactly what a good puzzler should be and it’s perfectly designed for one-handed iPhone play. And while there is a star system that rewards you for completing a level in the minimum number of moves, there’s no timers or anything reflex-based to stress you out. It’s pure brainy and relaxing fun. 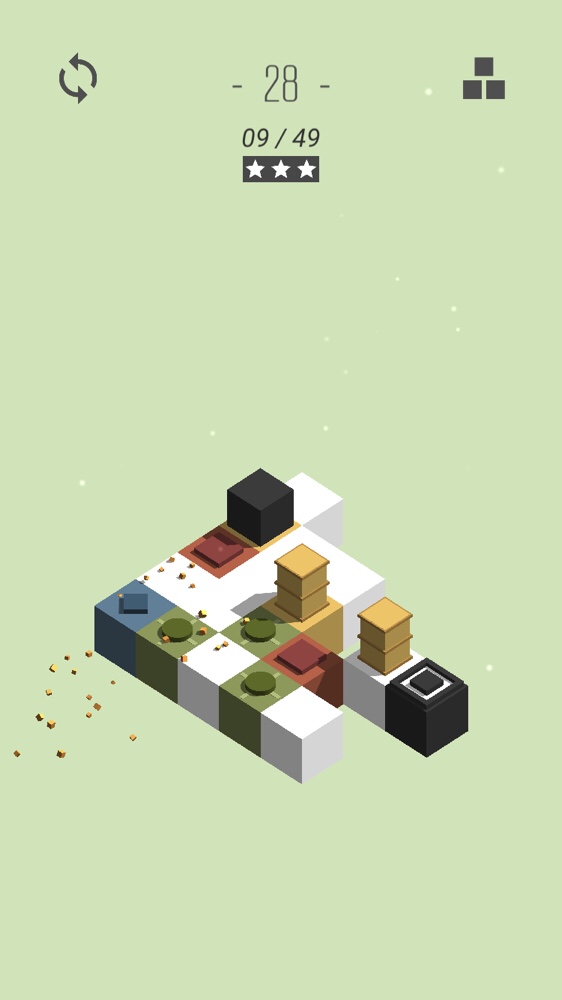 While there aren’t that many animations, I do love the way pillars explode into small particles and then the crumbs stay on the screen. The same happens with cubes that break apart when you step off them. The artwork may be minimalistic, but it’s not lazy. You can see this is a passion project with a ton of heart in it. And while so many bigger developers are leaving out things like iCloud sync, this one-man job not only utilizes iCloud, but it even plays in portrait mode on iPhone and landscape on iPad, the most comfortable ways to play on each device. Beyond that, he even went so far as to make it colorblind-friendly, as each colored button has a specific shape. It’s nice to see these things taken into consideration, though I can’t personally speak to its effectiveness. 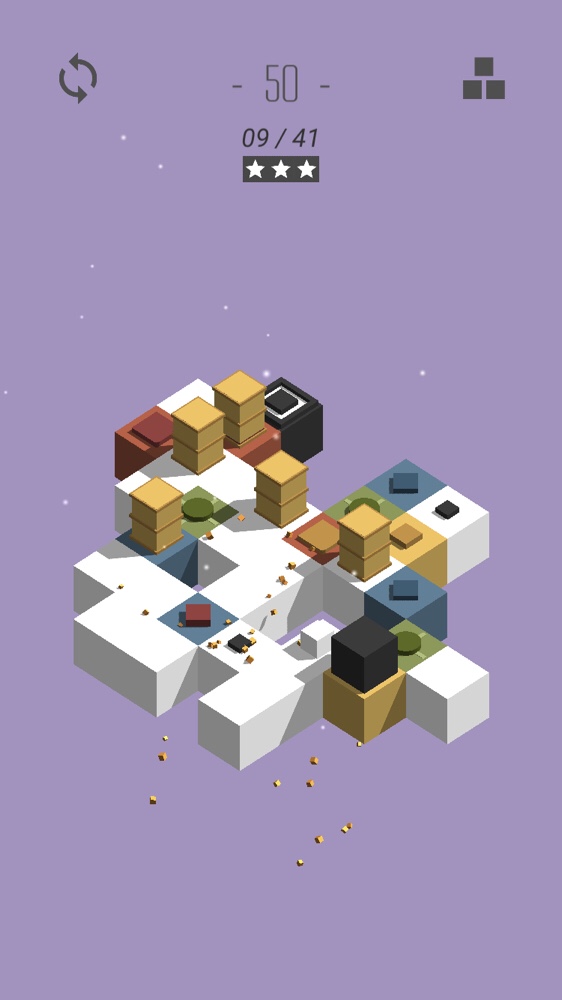 Now, despite the game being nearly perfect, I do have a few quibbles with it. The number one feature that’s lacking is an undo button. Early on, it’s not a big deal to start over if you mis-swipe or just mess up, as there aren’t too many moves to repeat. But once you get to puzzles that require thirty-five or even fifty moves, it becomes problematic. As with any swipe-to-move game, it’s easy to mis-swipe. With an undo button, it wouldn’t be a big deal. But without one, it can mean having to restart the level from scratch. Still, I managed to complete the whole game with a perfect score on almost every level. So I liked the game enough to overlook this issue. Also, the developer said he’ll consider adding an undo button, so hopefully we’ll see one in the future, along with some new content. 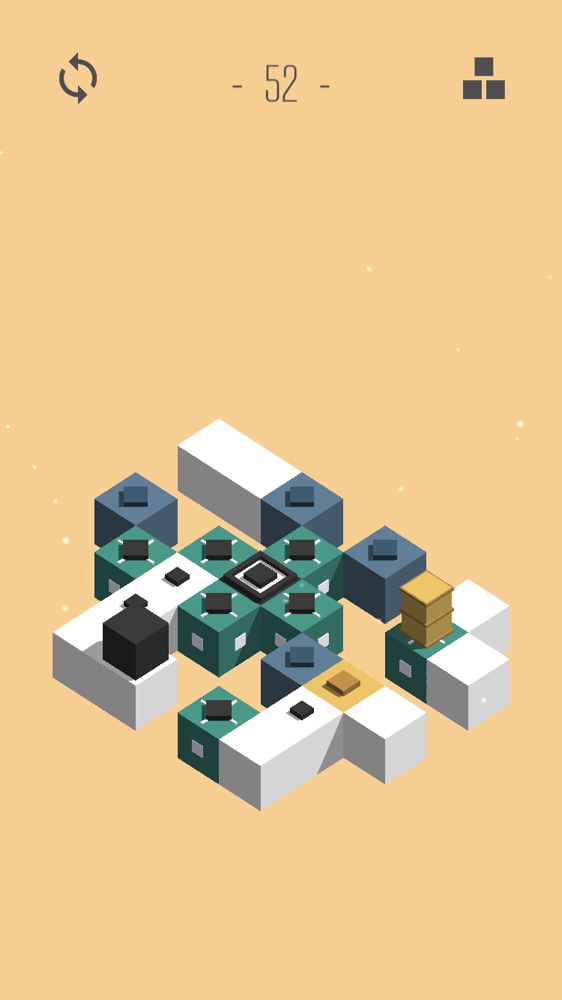 The other problem is that you don’t get to see the move counter unless you pass a level and get fewer than three stars. And once you do get three stars, the move counter disappears for good. Instead, you just see three stars every time you solve the level. It makes replaying the game less satisfying, as you can’t tell if you’re actually getting three stars or not. Again, the developer said he’d consider allowing players to always see the move counter. But I should also mention that I seem to have encountered a rare bug that made older levels unplayable. It might be due to my turning off iCloud on one device to get around the whole move counter disappearing thing. The developer knows about it, but just beware if you plan to share the game with family members, as turning off iCloud may cause unwanted results.

Despite those few niggles, I loved my time spent with QB. The undo button would have made things a little less tedious, but the puzzles are so cleverly designed with the player in mind that I was able to forgive it more easily than in other games. I live and breathe for these brilliantly hand-crafted puzzle games that respect the player’s intelligence and time. If you do, too, this should be the next puzzler you play. At such a cheap price, QB should be on every puzzle lover’s device. So what are you waiting for? Grab it here and get swiping!