At first glance, Dissembler might not look like much. It’s certainly not as shiny as most match-three games on the App Store. It’s made up entirely of simple, minimalistic squares and would probably be easy to overlook. It’s also the first puzzler from Ian MacLarty, who’s known for fast-paced arcade games like Boson X and Jelly Juggle. So when I got an email about it, I was a bit skeptical, but still willing to give it a try. I didn’t expect to be pulled into it and unable to stop playing until I completed all one-hundred-and-twenty-odd levels.

Describing the game probably won’t do it much justice. It’s a very simple concept that just works really well. You’re presented with some square tiles of different colors. Early on, each tile will be only one color, but later you’ll encounter some with multiple layers. The goal is to clear all tiles by matching them in groups of three or more. You do so by flipping two that are next to each other. But you have to make at least one match every move or the game won’t allow the tiles to flip. When you successfully make a match, the tiles will snap into place with a satisfying “click.” 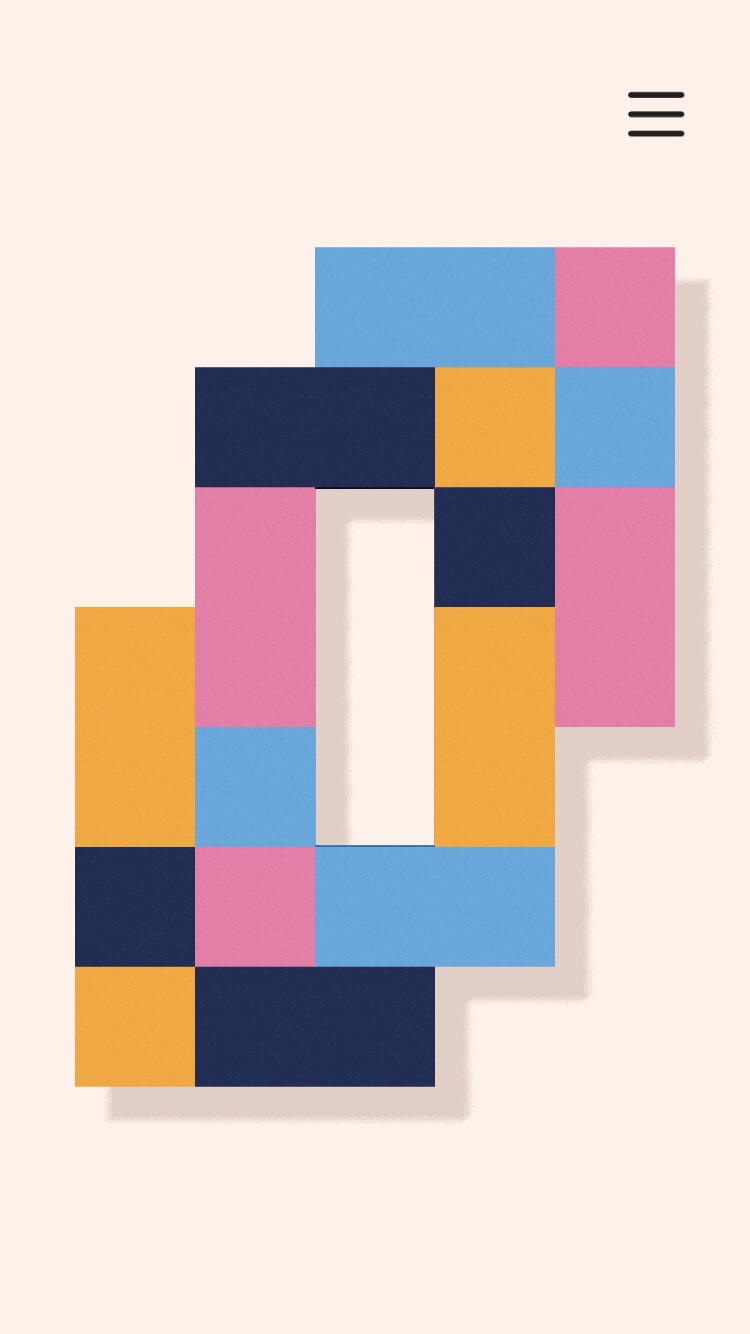 But there’s a loophole to the rules. If there’s already a match set up and ready to clear, you can flip two other squares to set up your next match. The two you flipped don’t need to make a match, as long as it doesn’t break up the match that already exists. There’s a whole section that uses this idea really cleverly, with two separate sets of tiles, one with groups of three overlapping each other so that when one clears, another is revealed. This allows you to focus on moving tiles around the other set without worrying about matches. That is, until the first set runs out. These were some of my favorite puzzles in the game, and they really help it stand out from other match-threes. 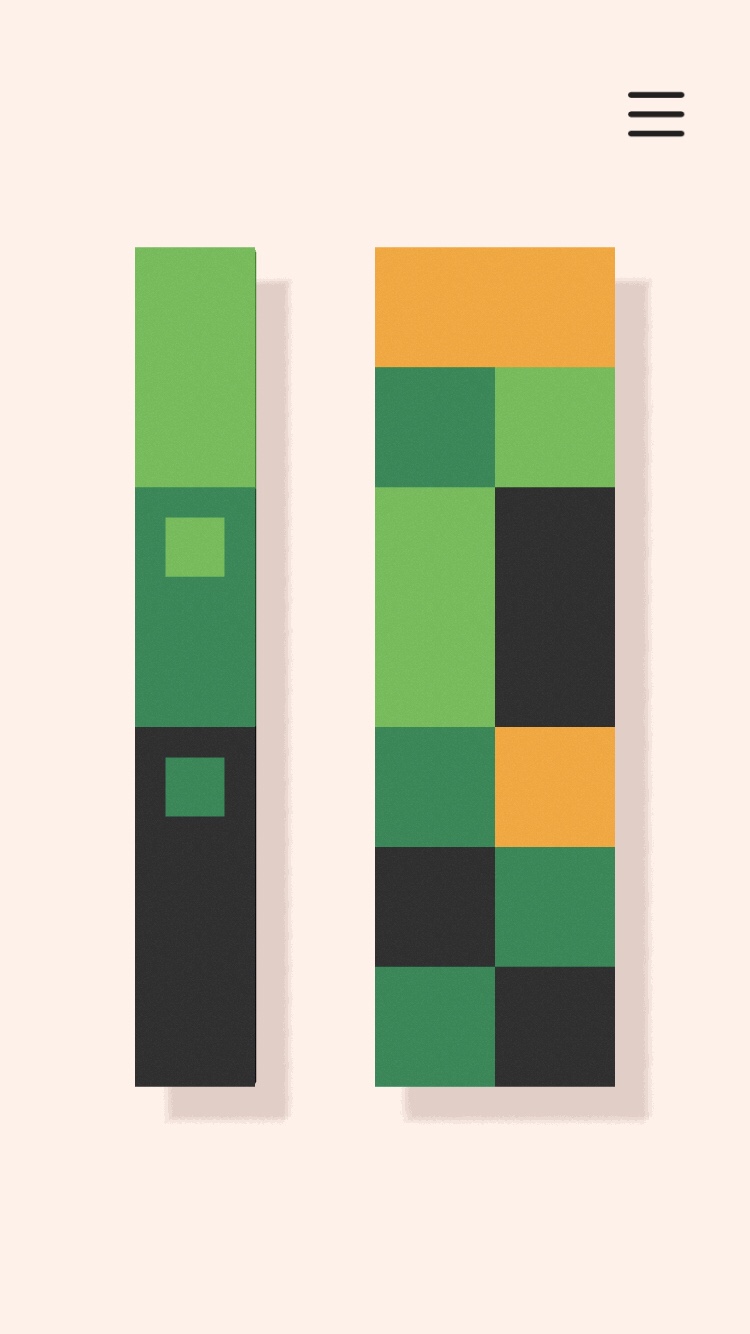 I need to talk about that snap. It’s so satisfying! As you’re flipping the tiles, it sounds like a crank, then as they fall into place, there’s that lovely click. Click click click. I never get tired of hearing it when I make a match. If you still have your finger on the screen, you can even flip it back, undoing your move if you realized it was the wrong one to make. But there’s also an unlimited undo button for when you realize you messed up after the fact. And that undo button is what makes this a relaxing, enjoyable puzzler for me instead of a tedious chore. Aspects of it remind me of KAMI and KAMI 2, but without an undo button, I didn’t really enjoy KAMI. It makes such a huge difference, and because of it I absolutely love playing Dissembler. 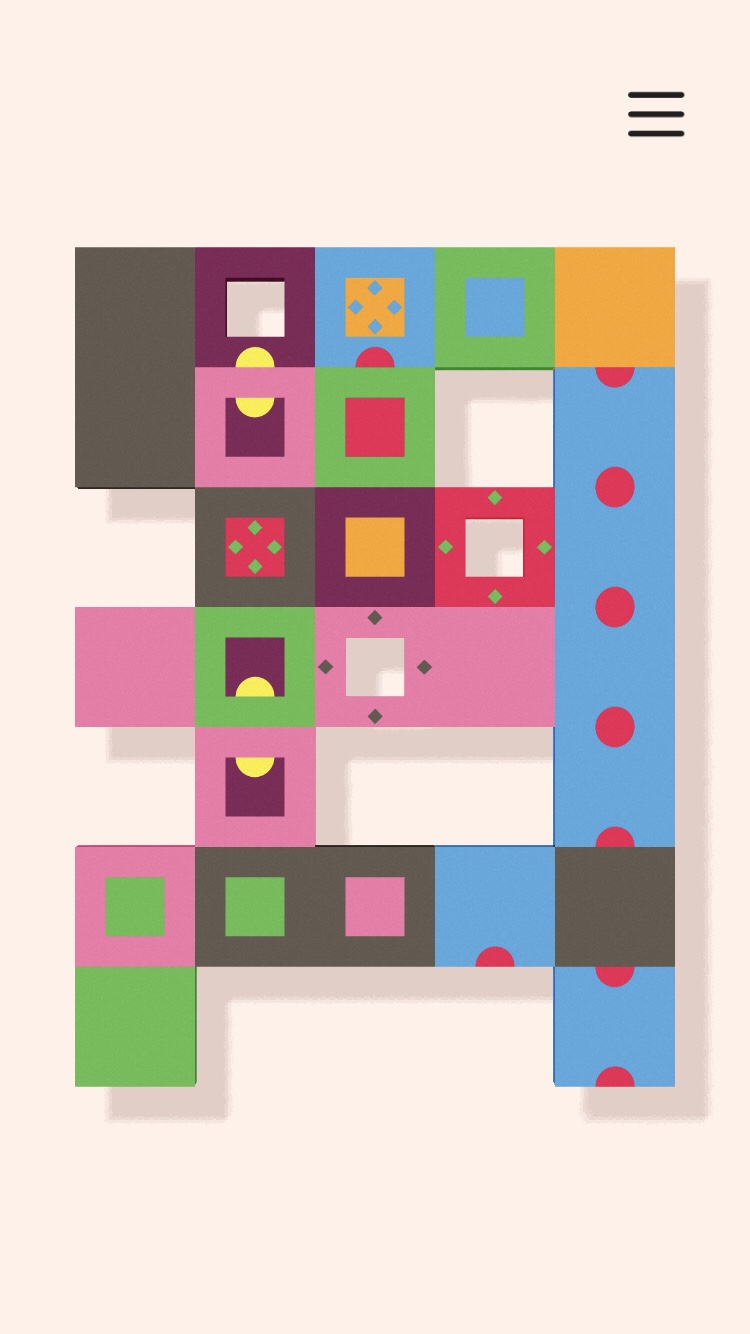 The game gradually introduces new mechanics using the same simple concept, so you’re always learning something new. For instance, you might solve a difficult level that has only single-colored squares. Then it will introduce a new mechanic, such as dots that need to be matched up, and slowly start ramping up the difficulty again. It keeps things fresh, while also reducing the need for any sort of tutorial, as you learn by experimenting on one thing at a time. And if you do get stuck, you can go into the settings and unlock all the levels at once without a catch. I’m always appreciative of devs that offer this option, especially when there’s no story to a game and no reason for a hyper-strict level progression. It also turned out to be a godsend here, because I got hopelessly stuck on a specific level and came back to it once I mastered the rest. As whole, the game is very user-friendly, offering a relaxed but stimulating experience. 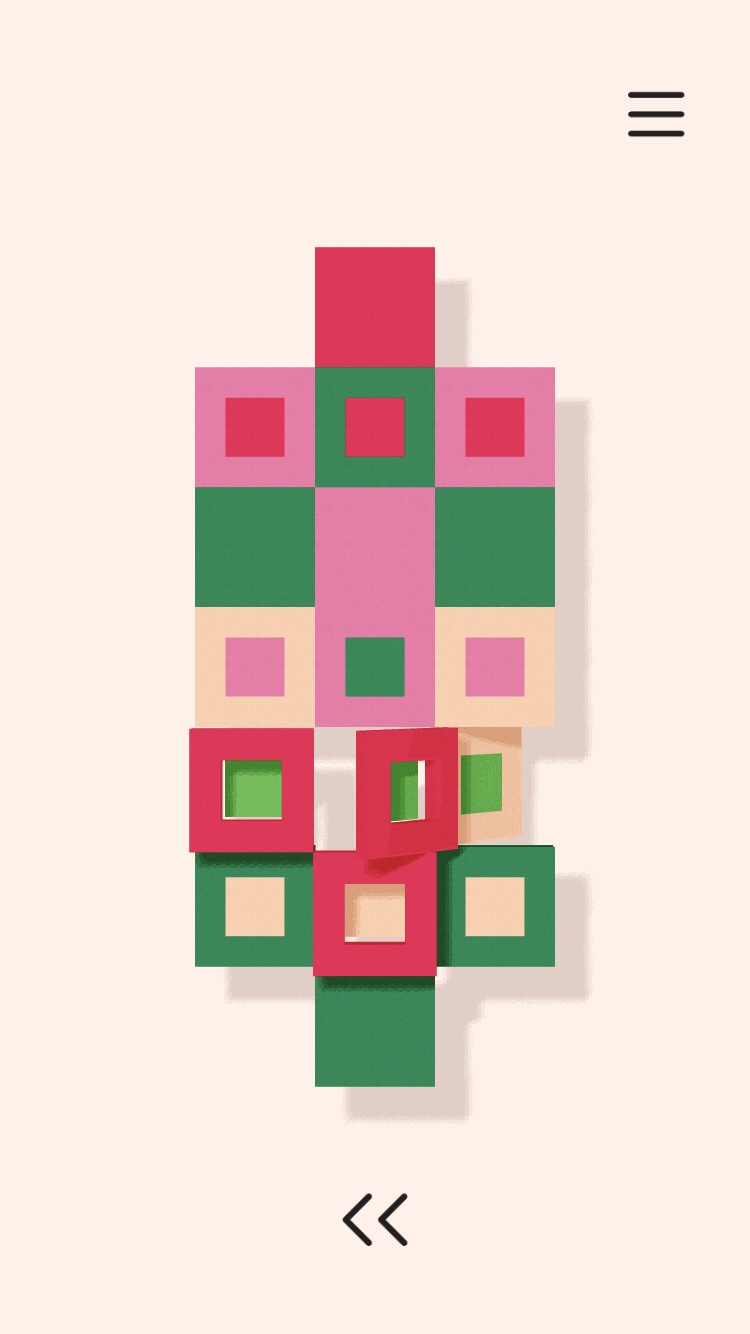 In some ways, Dissembler reminds me of Yankai’s Triangle, as you can mess around with it mindlessly for a tactile and meditative experience, but it won’t get you very far if you don’t stop and think about what you’re doing. Both games are very relaxing, with satisfying sound effects, but Dissembler is a trickier game overall. And while there isn’t an endless amount of levels, there is an Infinite mode, as well as six new daily puzzles to solve every day. 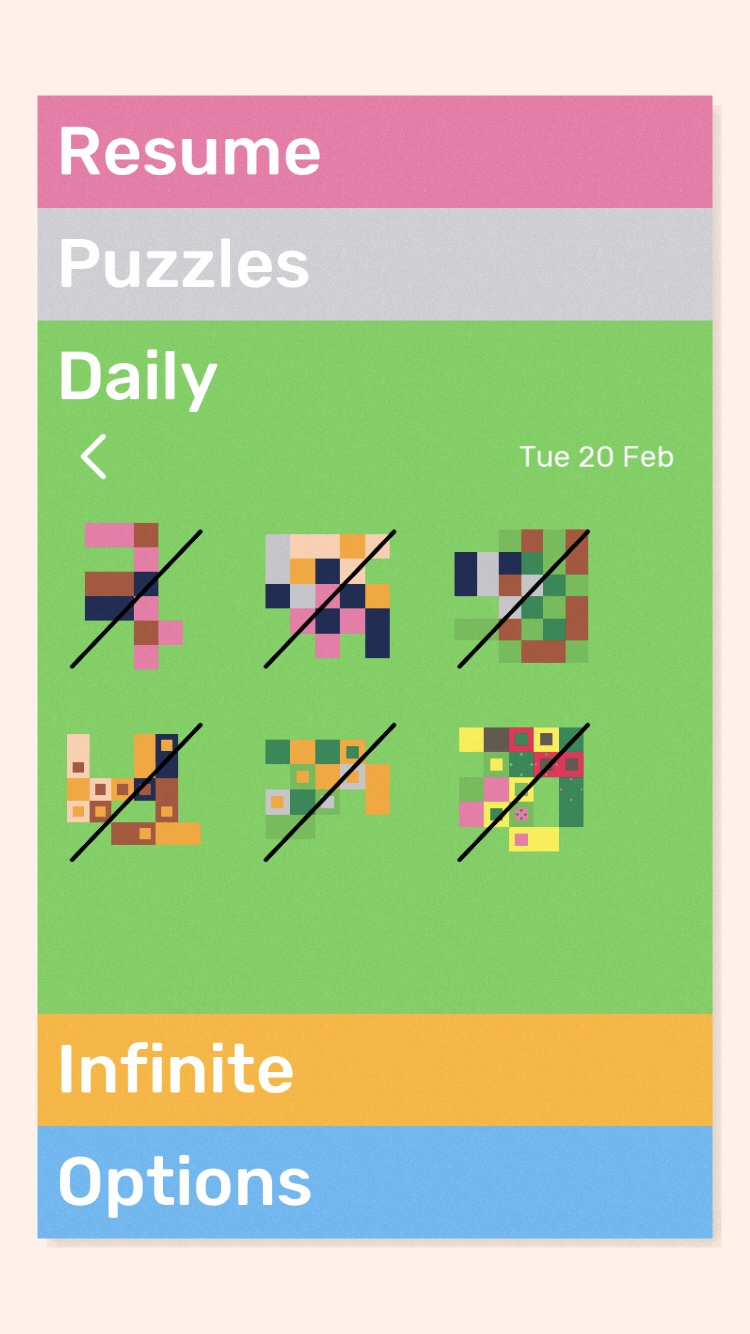 The Infinite mode is not my favorite part of the game, but I can’t really put my finger on why. It gives you a five-by-five grid of squares of three colors each. As you match three or more, the outer layer will disappear, leaving the next layer as the border and filling in the center with something new. The idea is to set up each match so that there will always be another match to make, as the game ends when you run out of moves. Since you only get a point for each move and no bonus for matching more tiles, its better to match fewer tiles at once and leave the others for the next move. It’s an interesting concept, especially with the unconventional scoring system. But it just doesn’t seem to hold my attention for some reason. That’s unfortunate, but I see it as a bonus, so it’s not the end of the world. The real attraction for me is set of six daily puzzles. 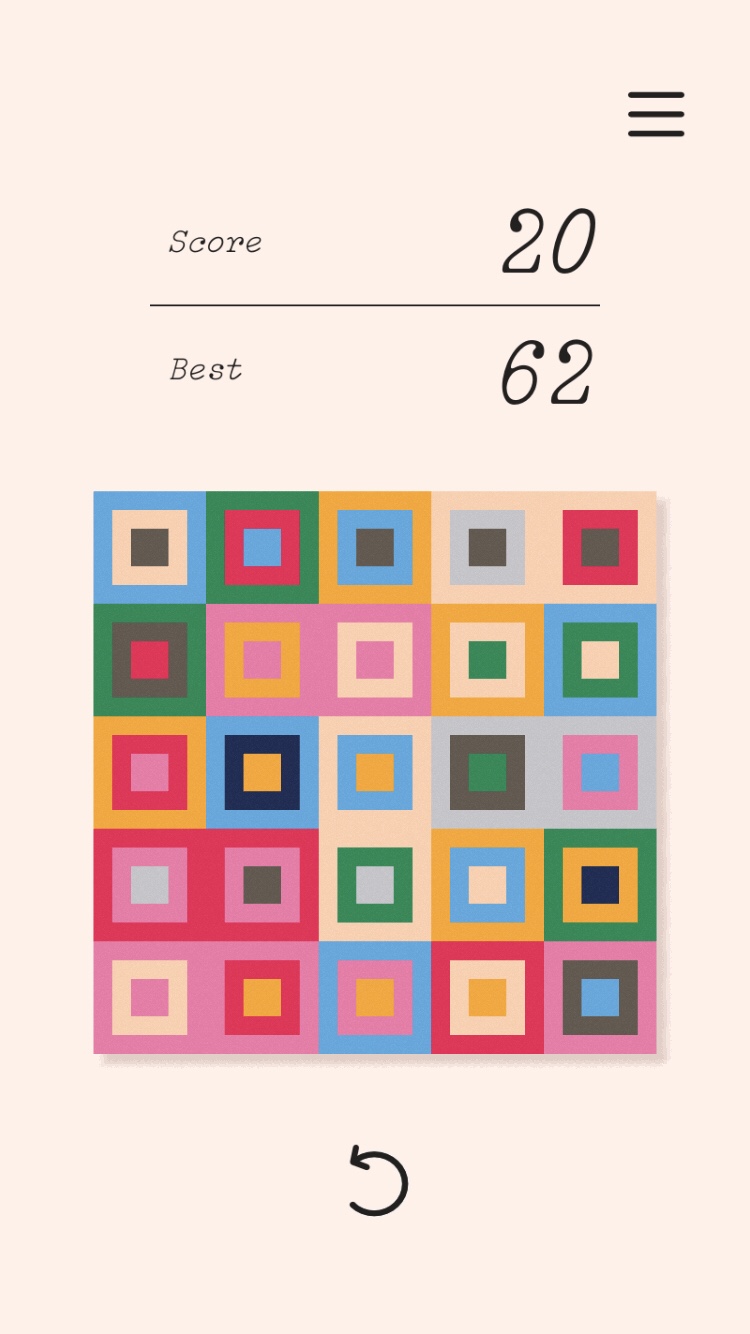 The dailies have become part of my morning routine along with Typeshift, something I begin to work on before I even get out of bed. I like how they start off easy and get gradually harder. Theres are usually at least one or two that take me some time to solve. I’ve even spent the whole day of on-and-off messing around with some to figure out the solution. The original hand-crafted one-hundred-and-twenty levels are great on their own, and would already be worth your money. But I’m so glad the procedurally generated dailies are included so I can continue enjoying this superb game.

And while the graphics may be minimalistic, there are some subtle animations and effects that add to experience without overdoing it. For instance, all the tiles are floating in front of the background, on which they cast a shadow. If you start flipping two tiles that would form a match, the matched tiles already start coming off the page. You can also see while you do so that the tiles are actually 3D, not 2D. Then, when you release your finger, they fly towards you and off the screen. And all of this is mimicked by the shadows. It’s not all that noticeable until you start to pay attention and think about it, but there’s something really nice about it. The music is also subtle, falling into the background and almost unnoticeable until you start paying close attention to it. Music in puzzle games is a tricky thing to pull off, as the longer I stare at a puzzle, the more the music starts to grate on my nerves. But the way it’s done here keeps it from ever getting annoying or overstaying it’s welcome.

If you’re a puzzle fan, I can’t stress it enough — you need to play this game. Not every level is difficult, but the tile-flipping is so satisfying on its own that it doesn’t really matter. And the trickier levels more than make up for the easier ones. Plus, the six dailies mean you’ll never run out of content. I have no complaints with Dissembler. It even plays in portrait mode on iPhone and landscape on iPad, the most comfortable ways to play on each. It doesn’t have iCloud, unfortunately, but the ability to unlock all levels from the start means you really don’t have to play catch-up. It’s the next best thing, and the game is perfect to play with one hand, so I recommend just sticking to your iPhone anyway. But whatever you do, just grab the game here and start flipping.

And if you’re hopelessly stuck on a level and don’t want to skip it, I’ve started a walkthrough guide here.