Twinfold is the latest game by Kenny Sun, and it’s inspired by the likes of Threes! and Imbroglio. It’s a high-score chaser, where you swipe to move your piece and all other pieces on the board at once. The idea is to merge number pieces so they combine into one bigger number, then eat the numbers to earn experience. It’s not an easy game, and there’s a lot of risk/reward involved. So I put together this guide to help out a bit.

– Swipe to move all pieces in one direction. Walls stop number pieces from moving (merge them by bumping two against a wall together) and cause damage to yourself and enemies, with some exceptions.

– Each time you merge two numbers, they’ll combine into one bigger number and the board will shift. Then another number piece of the same number will spawn somewhere randomly.

– If you eat a number piece, you’ll earn experience/score points, but after both number pieces are gone, a new one will spawn of half the value. So you want to merge them as much as possible. If an enemy eats one, he’ll gain max life in addition to you not getting the experience.

– The bar at the top shows your experience/score and how much you have left until you level up again. At each level-up, you get to choose between several passive or active skills. Choose wisely!

– Pay attention to the arrows on enemies. It shows which direction they’ll move on the next turn. You can use it to trick them into bumping into a wall and hurting themselves, or even falling into a pit.

– There is an undo button, but keep in mind that using it will deduct from your score. There’s also two separate leaderboards for scores with and without undos. I like to try and avoid using an undo unless I die, so at least if I get a high score, it will count on both leaderboards. Once you die, the score is registered even if you decide to continue. It just means that after that undo, the new score won’t register on the undo-free board.

– Pay close attention to every part of the board before making a move so nothing surprises you.

– Take risks. In my best games, I often inflicted damage on myself in order to kill an enemy or make sure two numbers could merge. Assess the situation and determine if you can survive ok with some damage.

– Don’t forget about your skills. They have a cooldown period, so don’t use them if you don’t need them, but they can really save your butt in a pinch.

– As you level up, new enemies will spawn with special abilities. Experiment to learn each enemy’s movement pattern and skills.

Enemies and Other Pieces: 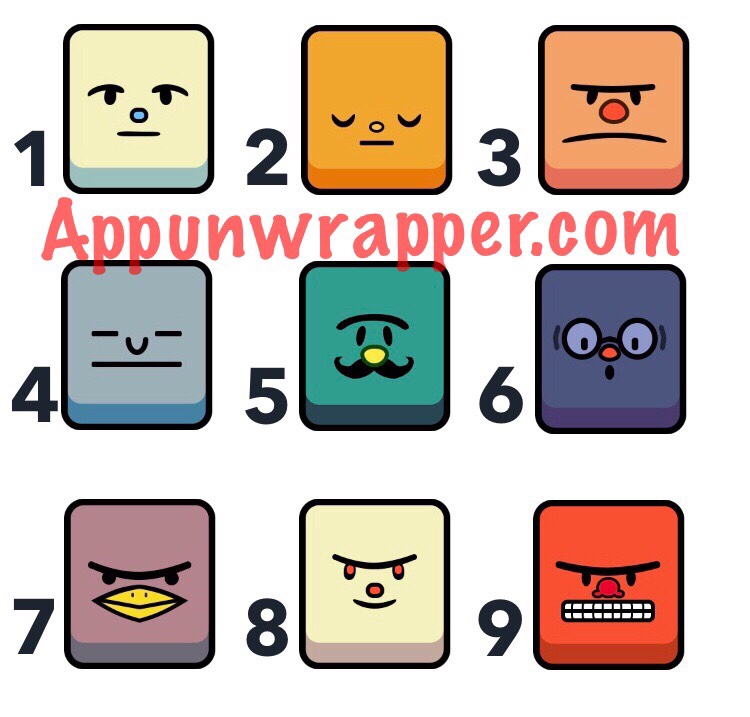 2. Idol/Number: These are number pieces. You need to merge them and then eat them to gain points/experience.

3. Basic Enemy: He’s the first enemy you meet. He doesn’t have any special skills and is fairly easy to kill. Just pay attention to his arrow!

4. Totem: These guys are made of stone and don’t move on their own unless they’re right next to you. Then they attack. Otherwise, they just move where you tell them.

5. Mustachioed Man/Strongman: I don’t think he has any special abilities, just a lot more health than other enemies.

6. Ghost: He can go through walls! He’s a pain in the ass, but easy to get rid of if you plan ahead. The best way to get rid of him is to push him off the edge of the board, as he’ll just disappear. You can also drop him in a pit.

7. Bird: He flies and therefore doesn’t fall into pits. You can still hurt him with walls, but they can be annoying.

8. Bully: These guys are the worst. They force you to move in the direction they’re pointing. If you try to go in the opposite direction, you’ll just be stuck in an infinite loop.

9. Angry: From what I can tell, these guys can’t be smashed into walls. They can only be damaged by running into walls themselves or falling into a pit.

Each time you level up, you can choose from several active/passive skills. They are permanent, so don’t worry about using them up.

The active skills require MANA. You earn mana each time you kill an enemy. You can see how much mana you have in the lower left corner — the blue diamond. The numbers on each skill tell you how much mana you need in order to use that skill.

Float (active): You no longer fall into pits.

Teleport (active): Teleport any piece to any empty space.

Clone (active): Split yourself in two.

Super Squash (passive): Enemies that are squashed against walls are dealt +1 damage.

Matador (passive): Enemies that run into walls are dealt +1 damage.

Xenophobia (passive): Enemies deal +1 damage when they attack other enemies.

Ruminate (passive): Gain an additional skill choice when leveling up.

Transpiration (passive): Heal 1 whenever an enemy eats an idol.

Venomous Gold (passive): If an enemy eats an idol, they die.

Here’s a couple of videos. The second one is a high score of 49 million.