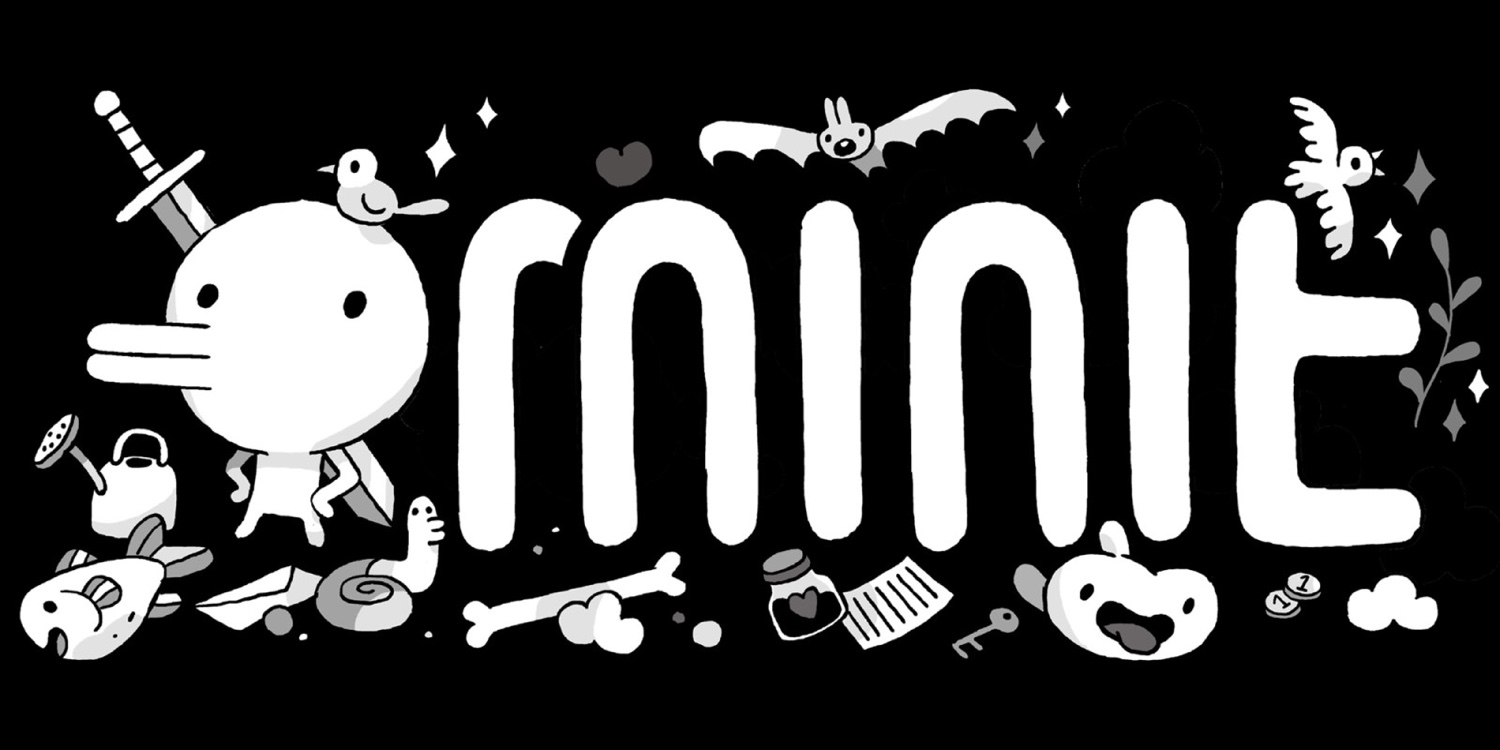 Ever since Minit was announced, I’d been hoping it would come to mobile devices. The bite-sized gameplay seemed perfect for on-the-go play. And now that it’s finally made its way over to iOS, I can confirm that it is indeed a great fit for the platform. If you’re not familiar with the game, it’s a Zelda-like action-adventure RPG that’s played through 60-seconds at a time. In some ways it may seem a bit gimmicky, but there’s genuine fun and excitement to be had here.

You start Minit like any other adventure game, with all the time in the world but nowhere to go. This is because you have no weapon, and you can’t get through shrubbery with just your bare hands, can you? So you search for a sword, like so many heroes before you. And you find one. But it’s cursed! As soon as you pick it up, a 60-second timer starts counting down. When it gets to zero, you die and wake up back at home. Any big changes you made in that minute — such as items and heart pieces found or non-player characters rescued — remains, but everything else resets itself. At first, this may seem a bit overwhelming, as there’s so much to explore and not enough time to do it. But as you find more items — like gardening gloves that let you chop down trees — you open up new areas. Eventually, you’ll find a new home. This allows you to start the day further from your original spawning location. Now you can explore your new surroundings. But there’s always the option to go back to your original home and see what you missed. There are several homes throughout the game, so you’re never too far from where you need to be. 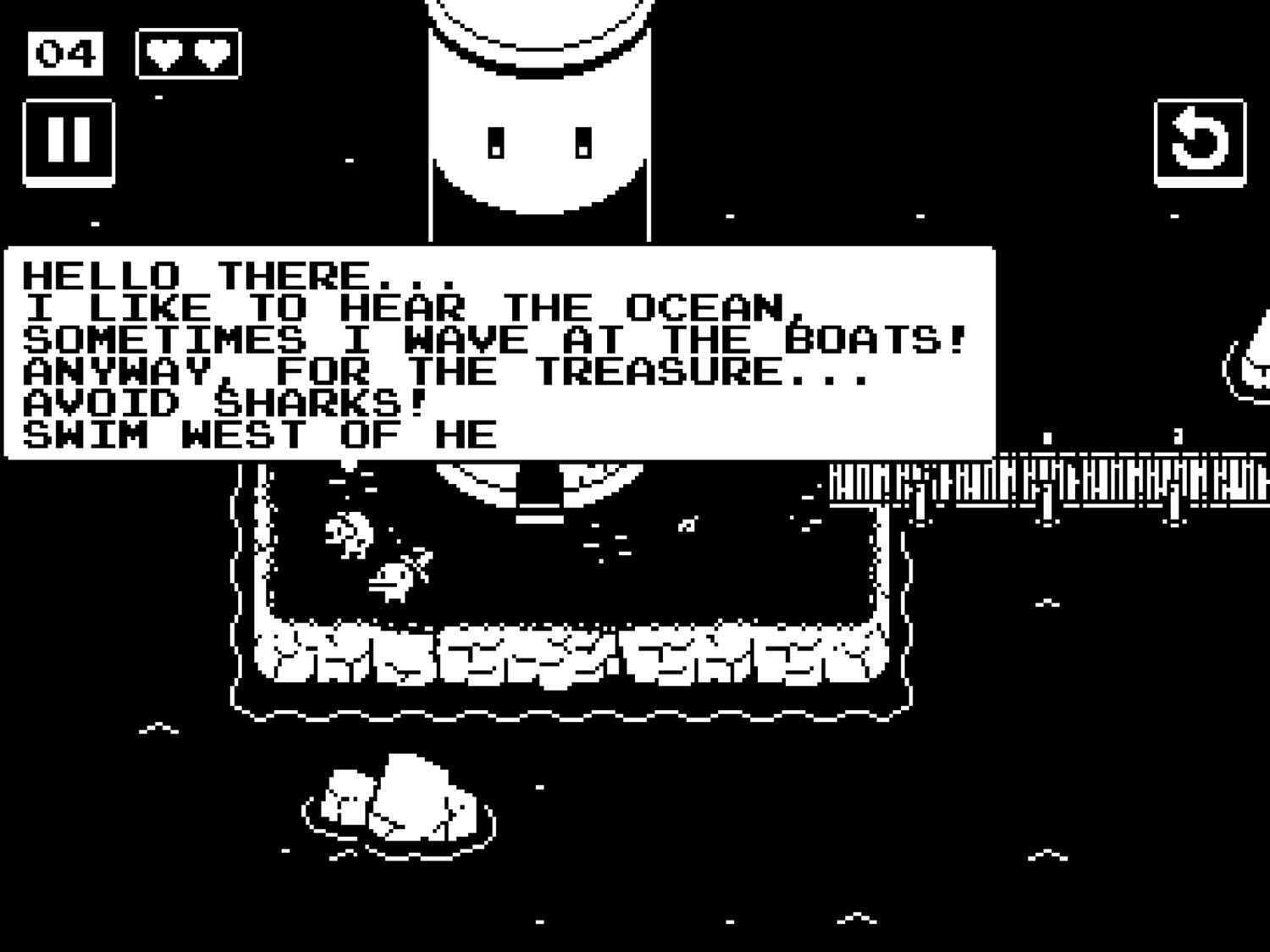 Minit is a strange paradox. It manages to capture this weird combination of frantic and relaxing gameplay. Even though it can be stressful at times to be on a sixty-second timer, there’s something comforting about knowing that even if you fail to achieve what you set out to do, you only lost a minute of your time. Even getting killed by enemies doesn’t matter too much, because you can get back there in just a few seconds. Sure, those minutes can add up when you’re not sure where to go next, but I think that can happen in just about any game like this. For the most part, it really works. It’s so exciting when you’re running out of time and manage to grab an item with two seconds left on the clock, and can then relax as you die knowing you made some real progress. Now new doors will open for you and you can find new adventures. 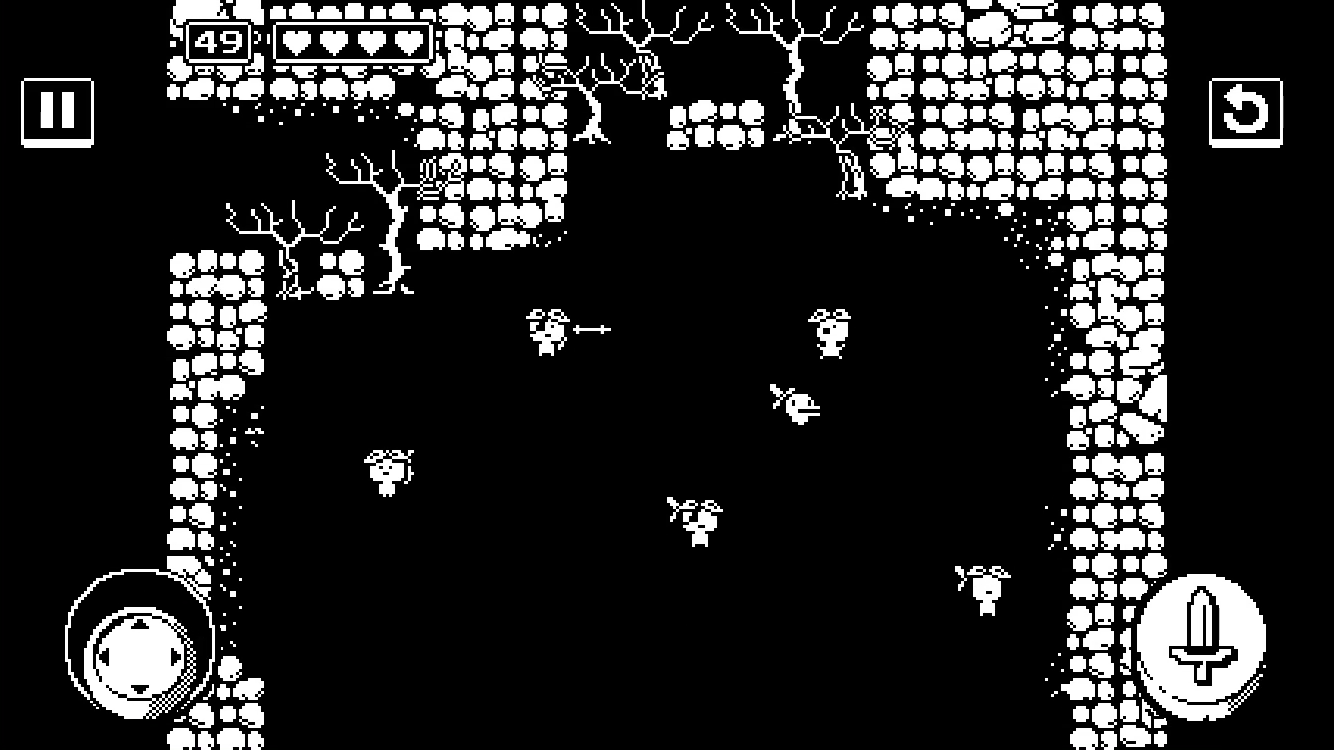 Now, for a game like this, it’s important that you feel in control or it can become a very frustrating experience. While touchscreen controls are rarely as precise as a physical buttons, Minit gets it pretty close to perfect. Yes, there’s a joystick on the left side and an attack button on the right. But those are merely suggestions. If you ignore them, you’ll notice that you can actually put your left thumb anywhere on that side of the screen and it will recognize your gestures. For the attack button, it’s a little less generous, but you can tap anywhere on the the bottom half of the right side of the screen. In fact, I recommend going into the settings and just hiding the controls. Then you won’t be distracted by them and can just let your fingers land where they want. This is especially important on a large iPad, as your thumbs are likely going to land more towards the middle, not the bottom where the visual controls are. As for responsiveness, I only had occasional issues, mostly related to sometimes getting stuck on things or pointing in the wrong direction when trying to swing or throw my sword. But the game is fairly forgiving, so I never felt like throwing in the towel over these occasional mishaps.

It took me longer than it should have to complete the main story, mostly because I kept getting distracted by things I thought were puzzles but weren’t. For instance, I probably wasted about fifty or so in-game days pushing crates into water, thinking they would line up properly if I just did something a little different. I also found the in-game clues and hints a little too cryptic at times, so it sometimes took me longer to realize what I was able and meant to do next. And I think it was a mistake to spread my play sessions out across several days. Each time I returned to the game, I had forgotten exactly what I’d done and where I’d been. There’s unfortunately no mini map, so you either have to memorize things or take notes. Instead, I ended up retracing my steps a lot just to refresh my memory. So I think, if you’re going to play Minit, it’s better to try and do so in a couple of days without too much time between sessions. 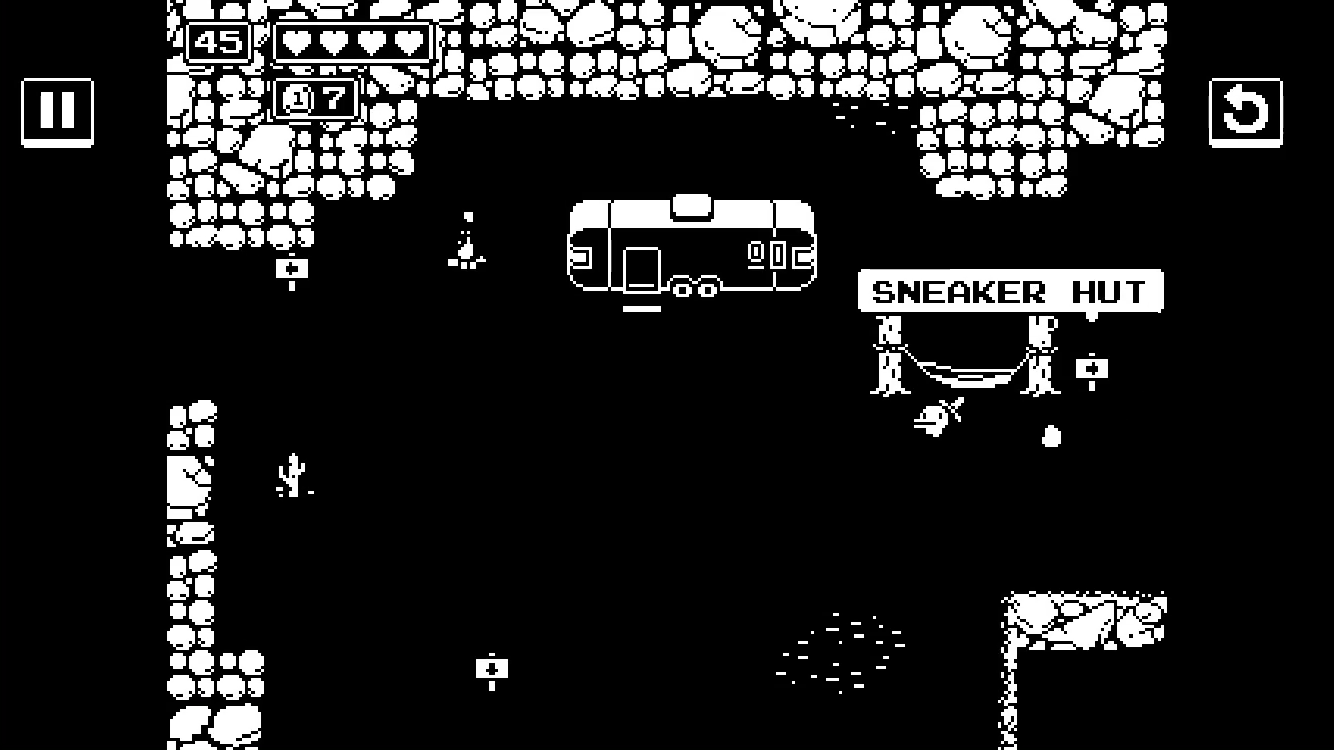 Now that I finished the main game, I want to go back and find all the coins and other secrets I missed. According to the in-game stats, I’ve only found 68% of the items, which includes coins and hearts. I’m not really sure where to look, but I plan to take my time with it and just enjoy the hunt. There are some characters that you can unlock that give cryptic hints, and I’m hoping that looking over those might give me an idea where to go next. In any case, I’m glad to have more to work towards, as it’s exciting to uncover new items or areas. For those who really can’t get enough, there’s even a New Game+ mode, which shortens the timer and lets you compete with others in a speed run. I can’t see doing that myself, as I prefer a stress-free experience. But I think that’s a nice addition for those who want it. 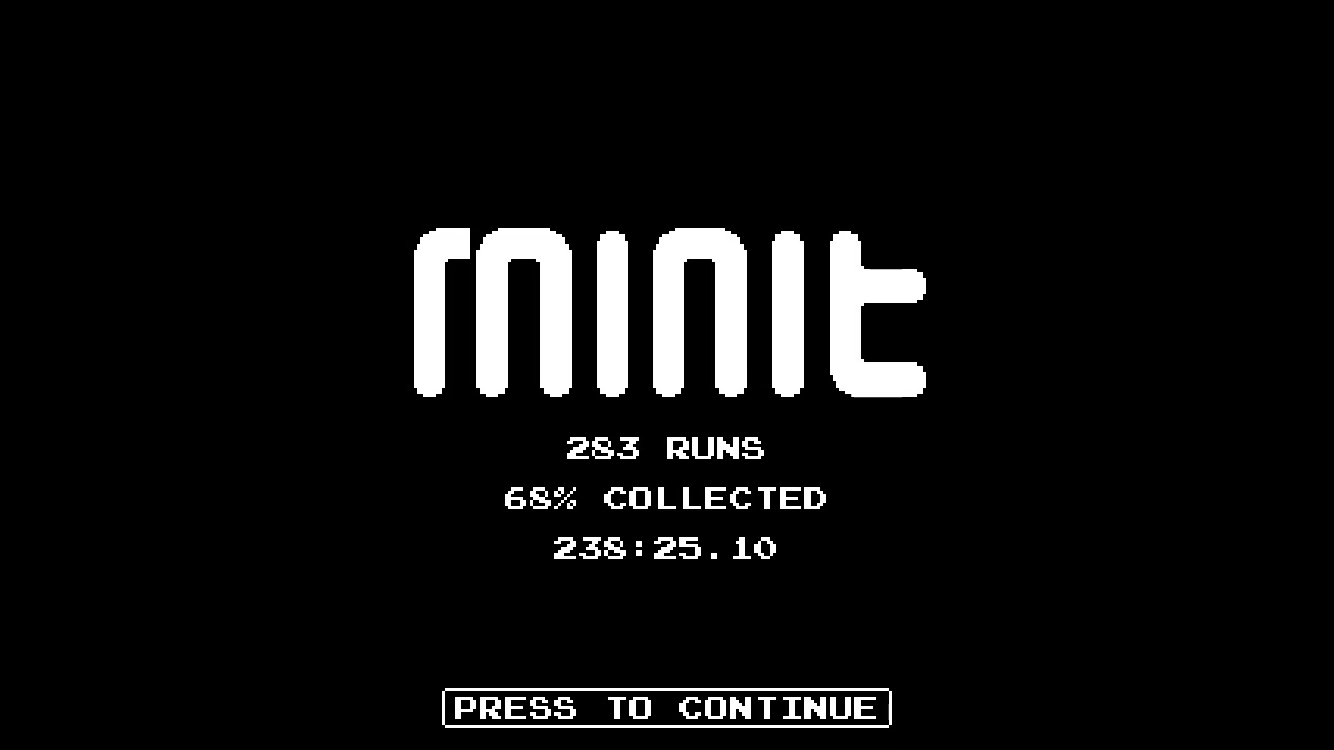 I have very few complaints about Minit, especially the mobile port. It seems to be the complete game, as far as I can tell, including all GameCenter achievements. I do wish the hidden achievements had some sort of hint, as there isn’t even an icon to go by, like on Steam. I’ll probably end up having to look at Steam’s page to get an idea of what the hidden achievements are that I’m missing. I also wish the game had iCloud sync so I could play the same game on my iPad and iPhone. But it’s a good fit for iPhone, so I’m not too upset about being unable to play on my iPad.

The bottom line is that Minit is just about perfect for mobile devices. If you haven’t picked it up on another platform by now, don’t hesitate to grab it at a cheaper price and also have the ability to stick it in your pocket. The controls have been adapted as well as anyone could expect, allowing players to focus on the action instead of staring at on-screen buttons the whole time. While it’s not a huge game, there’s plenty of secrets to hunt down and a more challenging mode for those who find it too easy. And for those who prefer a relaxing experience, there’s no real consequences for messing up or taking longer to finish. So you can go at your own pace and just enjoy the ride. I’m thrilled I finally got to play this quirky little game and am looking forward to finding all the hidden secrets. So don’t wait a minute longer — grab Minit here and start your sixty-second adventure.

And for those who need more convincing, I including the rest of my gameplay videos below.