Dungeon crawling is a dangerous hobby, and not everyone can make it out alive in the hunt for treasure. But what if death was the answer? That’s the idea behind Total Party Kill, the latest puzzle game from Jussi Simpanen. Sharing some similarities with Persephone and Sometimes You Die, this creative puzzler has you killing your friends so you can climb their corpses to victory. What makes this game unique, though, is that you have three different characters you control and they each kill in unique ways. Sometimes you have to combine their skills, too. The difficulty ramps up throughout the game’s sixty levels, but it’s still a puzzler at heart, so those allergic to platforming need not be afraid. In fact, this is the first puzzle game in a while that’s held my attention from beginning to end, and you’d be crazy to pass it up.

In Total Party Kill, you control three separate characters — a Knight, a Mage, and a Ranger. They differ in their weapons and how they kill their friends. The Knight can hit either of the other two with his sword and throw them across the room. The Mage shoots an ice bolt that freezes one of his friends into an ice cube. And the Ranger shoots arrows that pin his friends to the wall. Early on, each skill seems to have limited use, but as you progress and are faced with new challenges, you’ll have to get creative. That’s when you’ll learn how they can be used together. I’m afraid to say too much and spoil the fun of discovery. But for instance, already-existing corpses can still be frozen, thrown, or shot at. Perhaps you have the Knight pinned to the wall and you need to get him down — you can try freezing him! 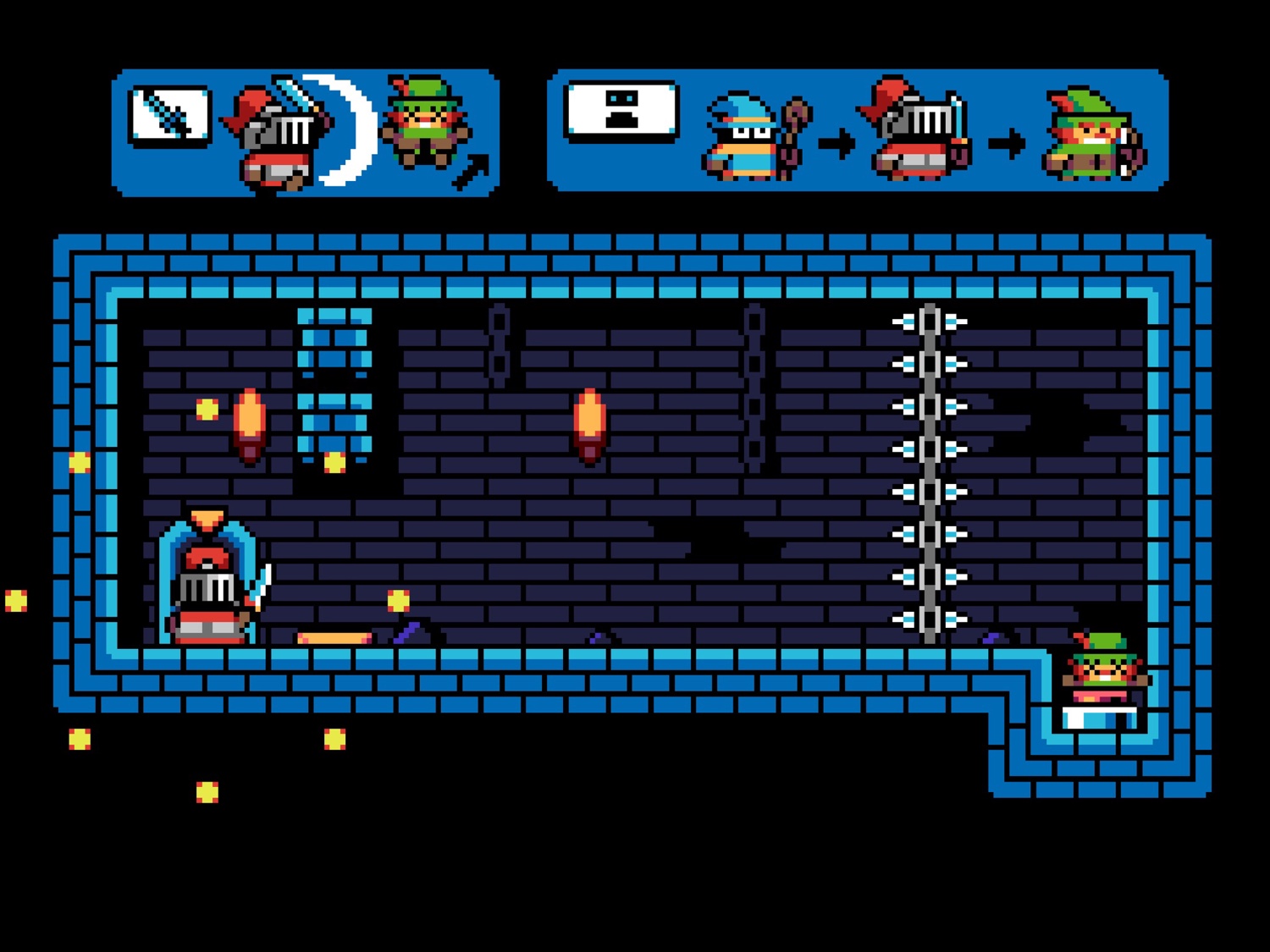 The controls are all on-screen buttons, which wouldn’t normally be ideal if this was a platformer with enemies and reflex-based sections. But, like I said, this is a puzzle game at heart, so it’s not about reflexes. It’s more about working out the solution and less about pulling it off. And every level is bite-sized and self-contained, so the worst that happens if you mess up is you restart that level. The controls serve their purpose here, even if it does mean you sometimes have to look at the buttons. There are left and right directional arrows, jump, attack, and then a button in the middle that cycles through the heroes to find the one you want to select. I’ve had a few mishaps where I accidentally killed a friend when I meant to jump, or made a bad jump and hit some spikes. None of these deterred me, though, because it’s no big deal to start a level over. 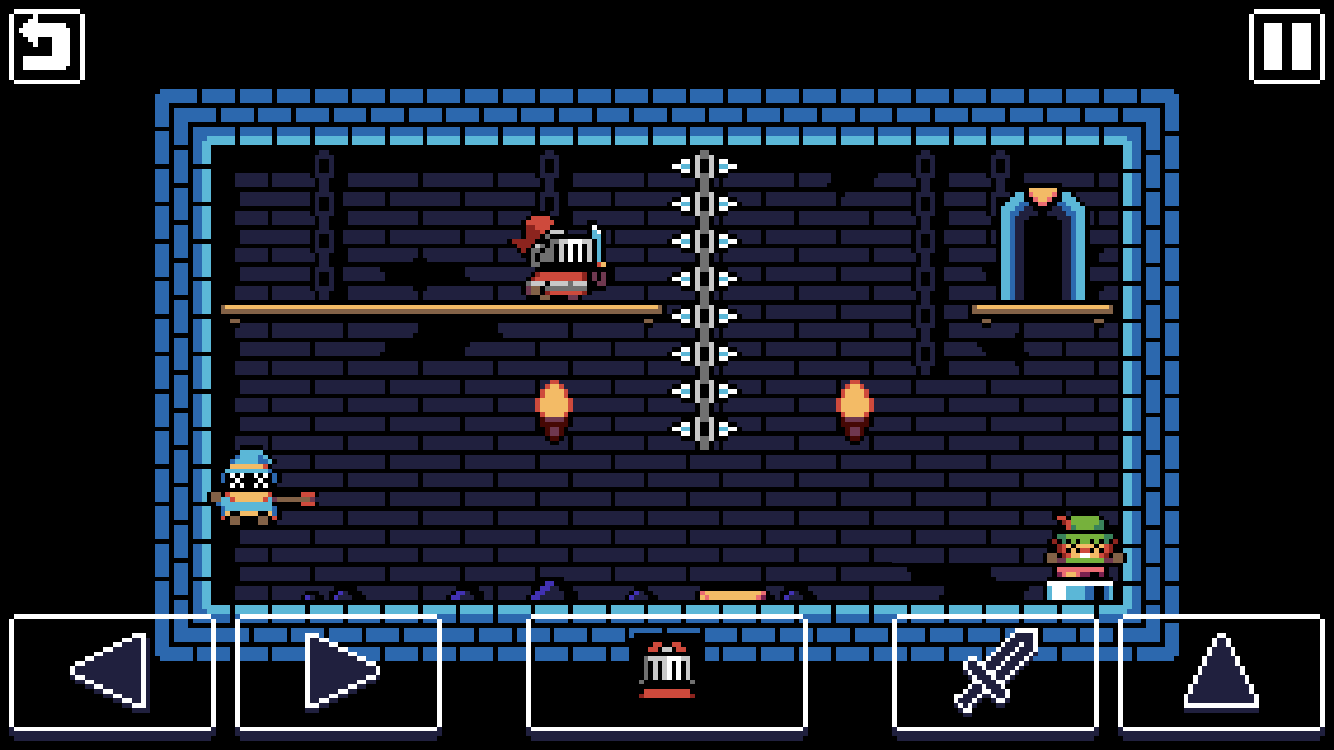 On my first playthrough, I had pretty messy solutions for some of the levels. But after playing through it again, I found neat and tidy solutions for most of them. There are still a few that required more finesse than others, so I’m still trying to see if I can find a cleaner solution. I also found it a bit odd that the Ranger can shoot arrows through retractable doors. But overall, I was impressed with the variety in the layout and the creativity of the puzzles. There are even objects added later to mix things up a bit, but I’ll let you discover that for yourself. Despite there only being sixty levels, many of them took me a while to figure out, not least because the game doesn’t hold your hand. After teaching you each of the heroes’ skills, it leaves you to experiment and learn all the different possibilities on your own. And everyone knows that learning through play is much more fun than having everything spoon-fed.

The game is also monetized fairly, as it’s free with ads for those who can’t or won’t pay, with a one-time purchase to remove ads permanently. So everyone wins! My only real complaints with the game are that there’s no iCloud sync and there’s no way to skip a level if you get stuck. Sometimes I spent a long time on one puzzle and would have preferred to move on and come back to it later. It also means players are more likely to resort to a walkthrough when they’re stuck. Still, those are minor issues in an otherwise fantastic puzzler. If anything, I’m sad it’s over and would love to see more content added, maybe even new characters like a fire mage or axe wielder. I’m not really sure, as I haven’t put much thought into it. I just know that I want more.

The bottom line is that Total Party Kill is one of those rare puzzle games that offers something truly unique and satisfying. Puzzle veterans may breeze through it faster than others, but should still be able to appreciate the cleverness of the mechanics. The worst part is that you’ll likely want more when it’s over, but I still prefer a short, tight game over a long one with tons of filler. If the developer manages to think up enough for a sequel, I’ll happily play it, but I rather it not be forced. In its current state, it doesn’t overstay it’s welcome and is truly a game to die for. So grab Total Party Kill here and start offing your friends.