I’ve mentioned this a number of times in my blog, but I’m not really a fan of hidden object games (HOGs). They mostly feel like a waste of time, like looking for lost keys. I don’t like pixel hunting in my adventure games, either. But when Adriaan de Jongh’s Hidden Folks released back in 2017, I was completely smitten. It took the idea of Where’s Waldo, but used its own unique black-and-white art style and nearly 1000 mouth-made sound effects to make a playful experience that’s far more than a HOG. My favorite aspects, aside from the amazing sound effects, were the humorous clues for each object and the way the game invites you to poke and prod at things. From the very first level, you learn that if you tap at big jungle leaves, you can slice at them and possibly reveal an ape hiding behind. Tapping on an X would dig a hole and make an item pop out, while tapping a boat would make it float along the water. There was just so much love poured into it, making it a magical experience for folks of all ages. My only complaint was that you eventually run out of content, and I wanted a way for the community to choose a person or item in a scene and make their own clue for it. That never happened, but this past week, a new game by Crazy Monkey Studios released, called Hidden Through Time. I knew it wasn’t a sequel, but it looked so similar that I was hoping it might capture that same magic. Read on to find out why that’s not the case.

In Hidden Through Time, the layout of each area is basically the sam as in Hidden Folks, with the objectives at the bottom. Once again, you tap on an objective to see its clue. Just like with Hidden Folks, you swipe around to see more of the scene and can pinch to zoom in and out. At first glance, the main difference is that this game has color. The drawing style is different, too, but not radically enough to make the game stand out on its own. If you played Hidden Folks, you’re going to see heavy inspiration here and not just from HOGs in general. In fact, you wouldn’t be blamed for thinking it was a sequel from the same developer. But what Hidden Through Time is lacking is the same level of interactivity that made Hidden Folks so special. Sure, you can tap on a tent or a house to see inside it, light some bonfires and maybe make a sitting dinosaur stand up. I even liked how stone blocks could be chiseled into sculptures. But for the most part, your taps will only illicit a sound, and usually not quite as entertaining as Hidden Folks’. Tapping on a tree makes leaves rustle, but it doesn’t actually reveal anything new. Most things don’t. So you’re going to spend more time just staring at the screen looking for the objects instead poking at them. 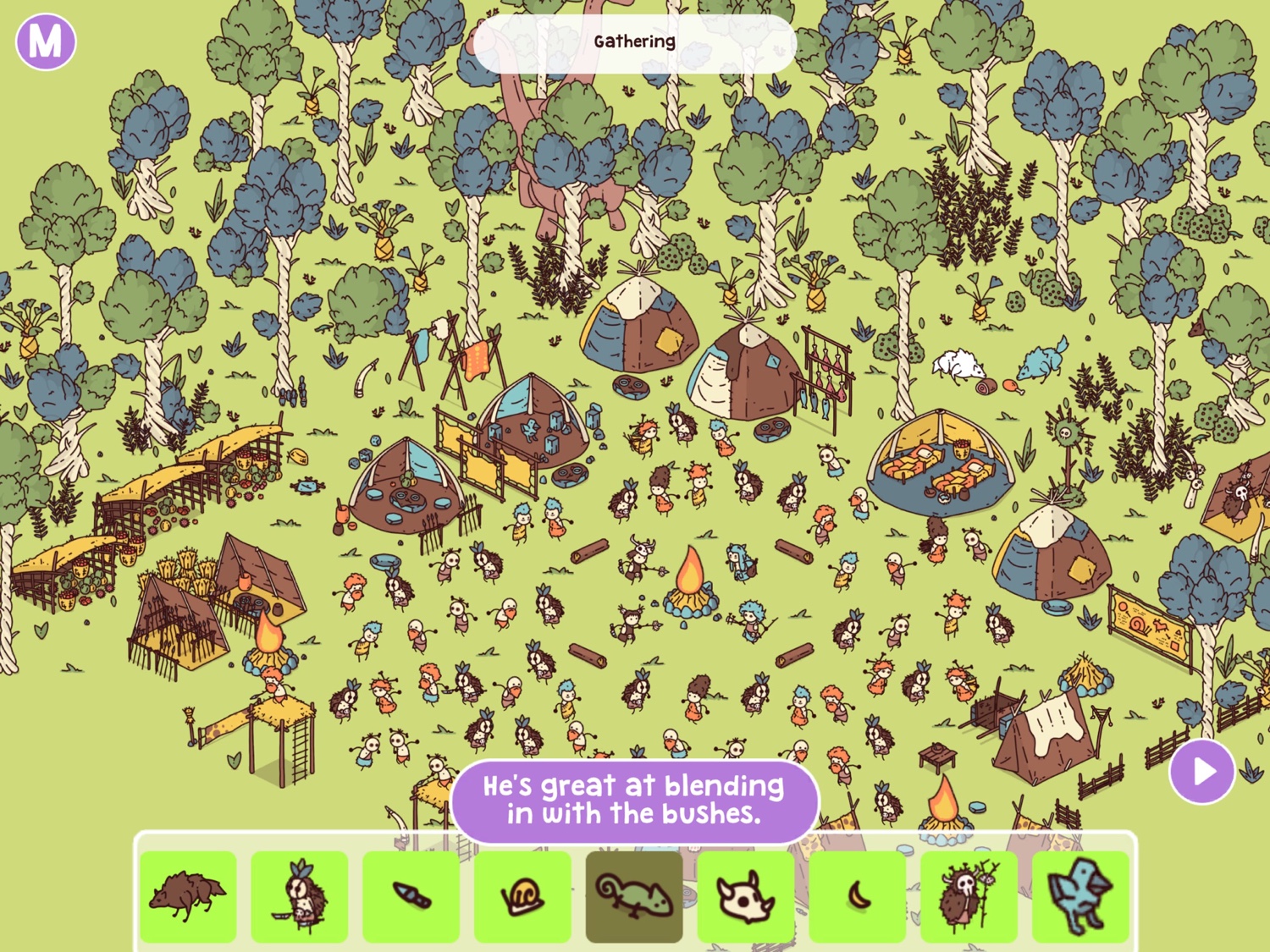 Not only is it not as satisfying to poke things, but the tap sensitivity is all off. I might tap on a person, and instead a tree nearby will rustle. I’ve tried to interact with a string of cooked fish to be met with a roar from a dinosaur, and I don’t think it’s because the game was trying to be funny. Since there’s no cursor to show where you tapped, it’s not even clear if the game has any idea where you’re touching. As an experiment, I’ve tried tapping in the close vicinity of an object instead of right on top of it, and it cleared the objective for me. In contrast, Hidden Folks only recognizes your touch if it’s directly on top, and it has no problem whatsoever figuring out what pixel you’re tapping on. The issue here is so pronounced that I didn’t even realize at first that I could light bonfires, since they only lit if I zoomed in first. This not only makes interacting with the environment feel frustrating, but also means random tapping everywhere is more likely to work for finding an objective than it does in Hidden Folks. 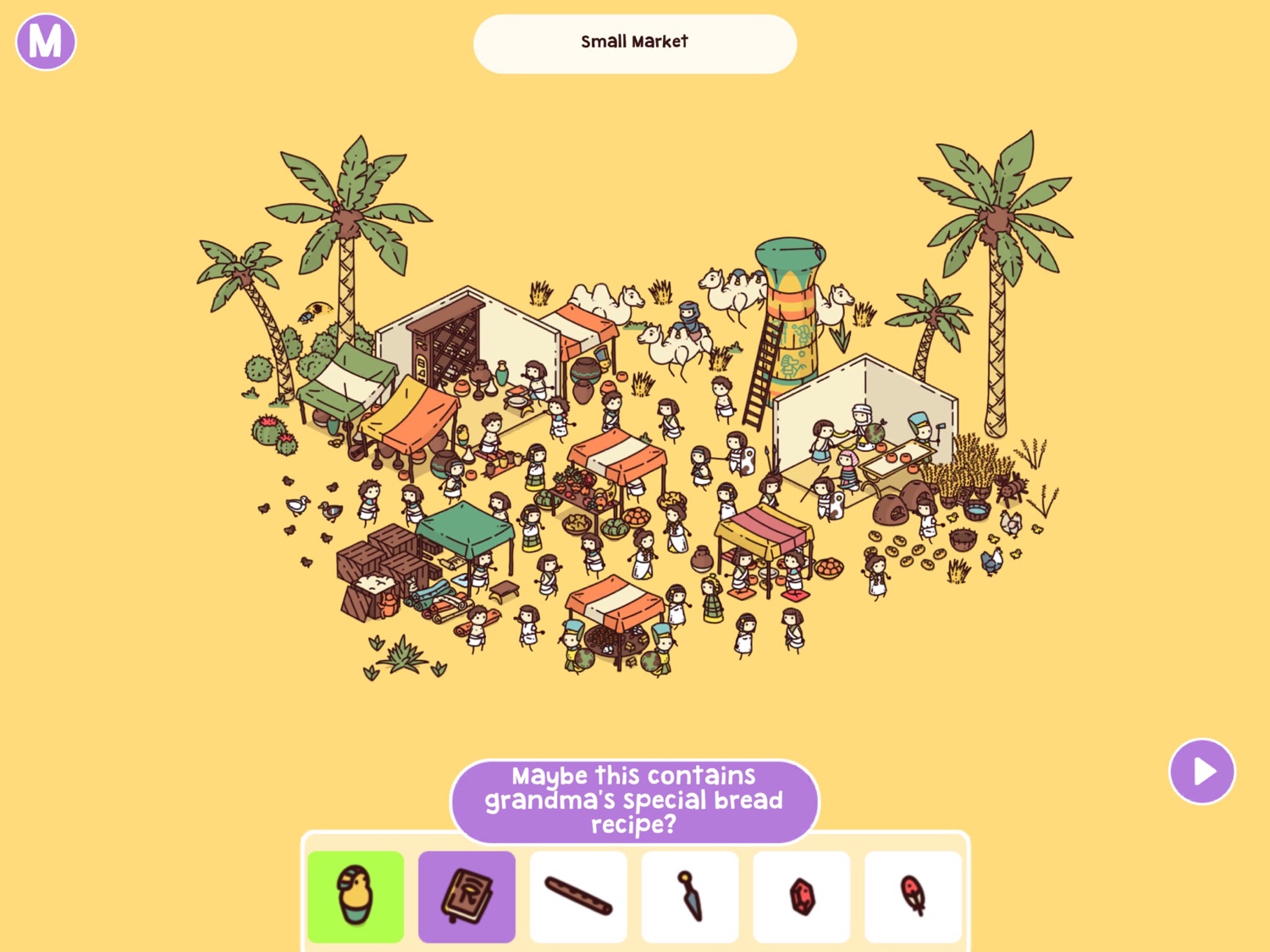 On top of that, the sound effects occasionally seem like they’re trying to copy Hidden Folks — but mainly the people, like cavemen. Other objects just have regular sound effects that you’d expect from them, nothing that particularly stands out. That would be fine, especially since I wouldn’t want them to copy Hidden Folks exactly. But the humorous sound effects were one of the main draws for me. I also loved how you’d hear all the noises in the background as you dragged the camera around the scene or pinched to zoom in. Hidden Through Time does away with that and replaces it with boring music that gets repetitive fast. If you shut it, you’ll be met with complete silence unless you tap something. So it’s lacking both the terrific sound design and level of interactivity of its inspiration, and in effect it feels soulless to me. Sure, there are a lot of different sprites and the animations look cute enough. I even appreciate the theme of traveling through history with each scene. But even without its buggy touch controls, it doesn’t have any of that magic that made someone like me want to play a hidden objects game. There’s no fun discovery of something falling out of a tree when I tap it, or treasure popping out of a hole. It’s possible there’s some more interactivity in later levels I haven’t played yet, but if that’s the case then the game is waiting too long to show its hand. 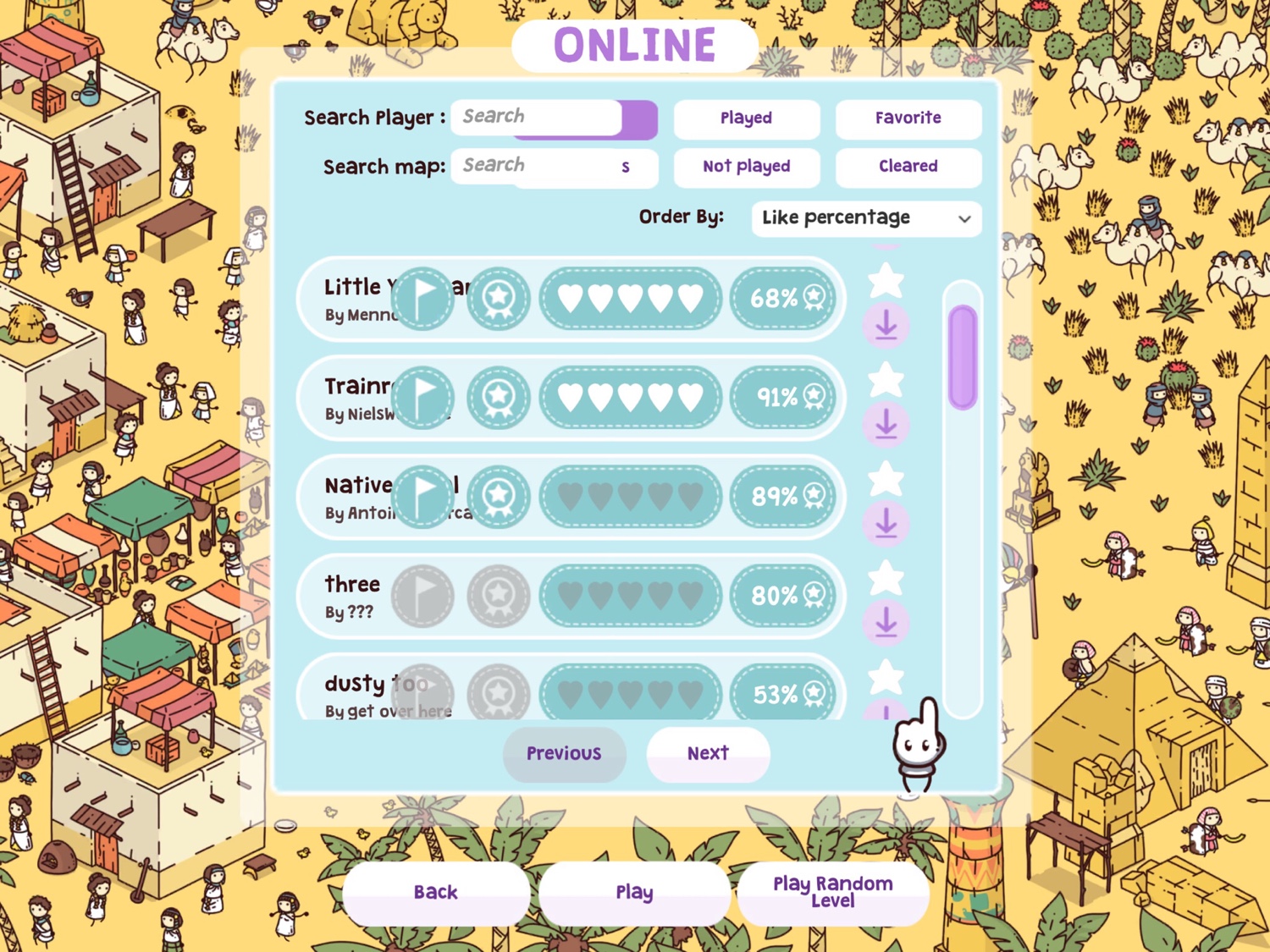 Now, despite all my complaints, there is one thing that Hidden Through Time has that makes it stand out — a level editor. Remember I was sad to see Hidden Folks end? Well, when you run out of the main content here, you can play community-created levels or try designing some of your own. If you already like the game, then that’s a great feature. You’ll have basically unlimited content as long as other players remain active. Personally, I’m not that interested in designing levels, but I did play a few made by the community. They were a mixed bag, some with clever clues and hiding places, while others had nonsensical hints. Still, all the problems that I had with the main game carry over to the community levels. And on top of it all, I played around a bit and discovered that you can hide an objective item behind other objects so it’s completely hidden. If you happen to tap in that general area, the game will still give it to you, but you’d kind of have to know it’s already there without being able to see it. Sure, the levels are rated by other players, so perhaps one that’s unfair like that would be downvoted to oblivion. But it still seems like a big oversight. 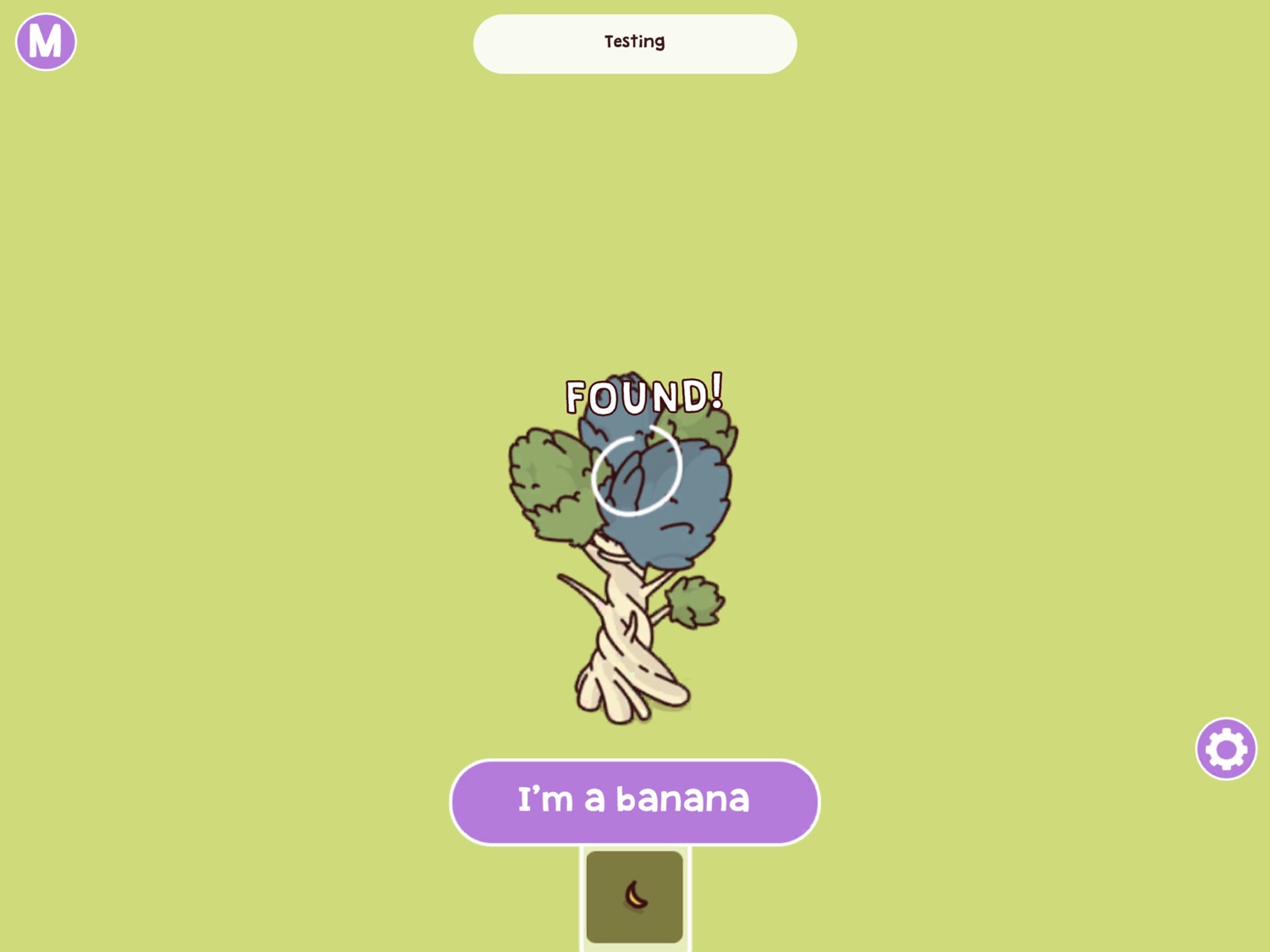 Aside from its buggy controls, I think what you’ll get out of Hidden Through Time depends on your expectations. For me, being an animated Where’s Waldo with a level creator wasn’t enough to hold my attention. Hidden Folks spoiled me with its magic and humor and overall playfulness. Hidden Through Time leaves out too much of what made it special and doesn’t add enough to make up for it, at least for me. But if you’re happy with an imperfect digital Where’s Waldo, you might get endless hours of enjoyment out of this. Perhaps the game shouldn’t have tried so hard to look like its inspiration, because my disappointment came primarily from that expectation. If you’re like me and don’t usually like pixel hunting but did enjoy Hidden Folks and wanted more of the same, I wouldn’t really recommend Hidden Through Time. But if you’re a HOG fan willing to overlook its flaws, grab the game here and start your search through history.