All of You
By: Alike Studio

All of You, from Alike Studio, is the latest in their “You” series of puzzle adventure games. Their previous one, Bring You Home, is one of my absolute favorite games, and I always recommend it to people when they ask for something kid-friendly. It’s similar to FRAMED, in that you manipulate the scene by swapping panels instead of directly controlling your character. It’s playful, accessible to all, and failure is every bit as fun as finding the solution. All of You is an evolution of this concept, and brings a lot of great ideas to the table. But it loses a lot of the accessibility found in Bring You Home because of its many reflex-based puzzles. The result is a mixed bag full of equal parts delight and frustration.

The story in All of You is along the same theme as their other games — searching high and low for someone who’s gone missing. In this case, it’s a mother hen trying to collect all her lost chicks. This takes her to all sorts of bizarre places, some reminiscent of Bring You Home‘s locales. There’s a playground, a ball pit, the inside of an active volcano, underwater areas, and even a dragon’s lair. In each scene, there’s always a chick waiting to be rescued. And usually something trying to kill you. Even when everything looks peaceful and nonthreatening, believe me — there’s danger lurking somewhere. But with a sharp mind — and sometimes reflexes — you can overcome any obstacles. 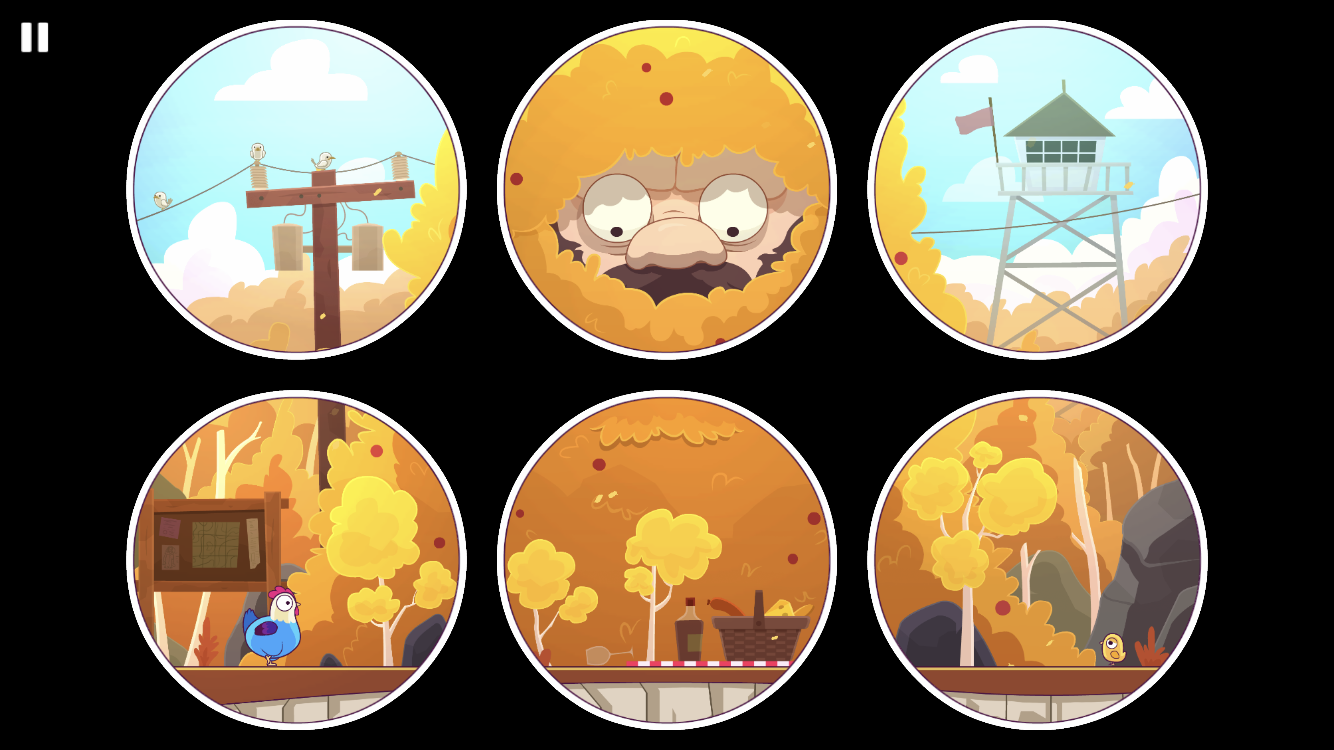 Here’s how it works. Each level is made up of a series of circles which form the scene. You can play or pause each circle with a simple tap. When the chicken gets to the edge of a circle, it will wait there until you play the next one so it can enter it. In most situations you can only play one circle at a time, as playing another one will cause the others to pause. The exception is circles that can’t be paused at all and continue playing no matter what. That’s usually where timing and reflexes matter. For instance, there’s a level where a platform rests on a stream of lava that shoots up at intervals. You can’t freeze that frame with the platform where you need it, so instead you have to figure out the exact moment when to play the previous frame so the chicken lands on the platform at the right time instead of falling into the lava. 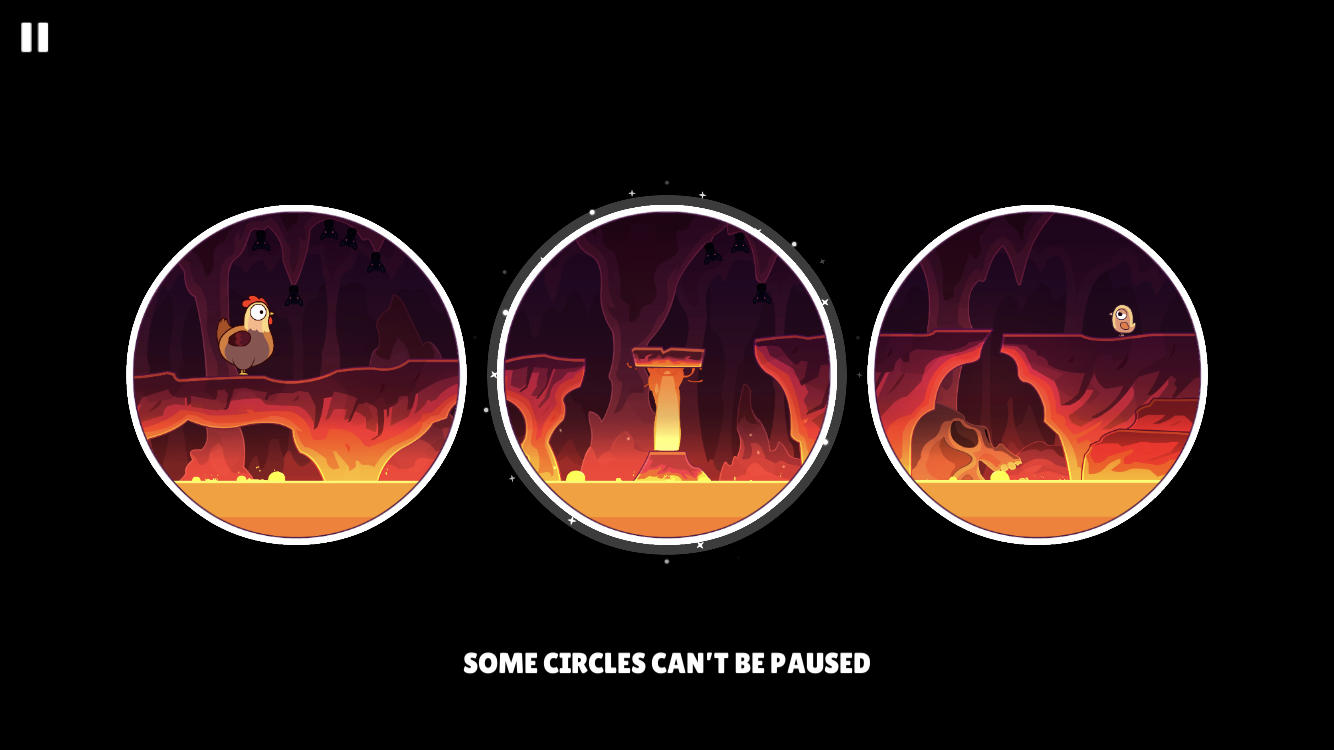 There are also circles that can be swapped and others that can be flipped. You might need to swap two frames to get a charging animal to go past the chicken instead of through her. Flipping a circle can change the direction of a projectile or turn the hen around and away from danger. The deeper you get into the game’s seventy-two levels, the more creative you’ll have to be to find the solutions. And there are a lot of clever ways these few simple mechanics are utilized. I don’t want to give away my favorite ones because that will spoil the fun for you. I loved the moment in a puzzle when it clicked and I realized what I needed to do. But that excitement often fizzled after twenty attempts to get the timing right on a level. 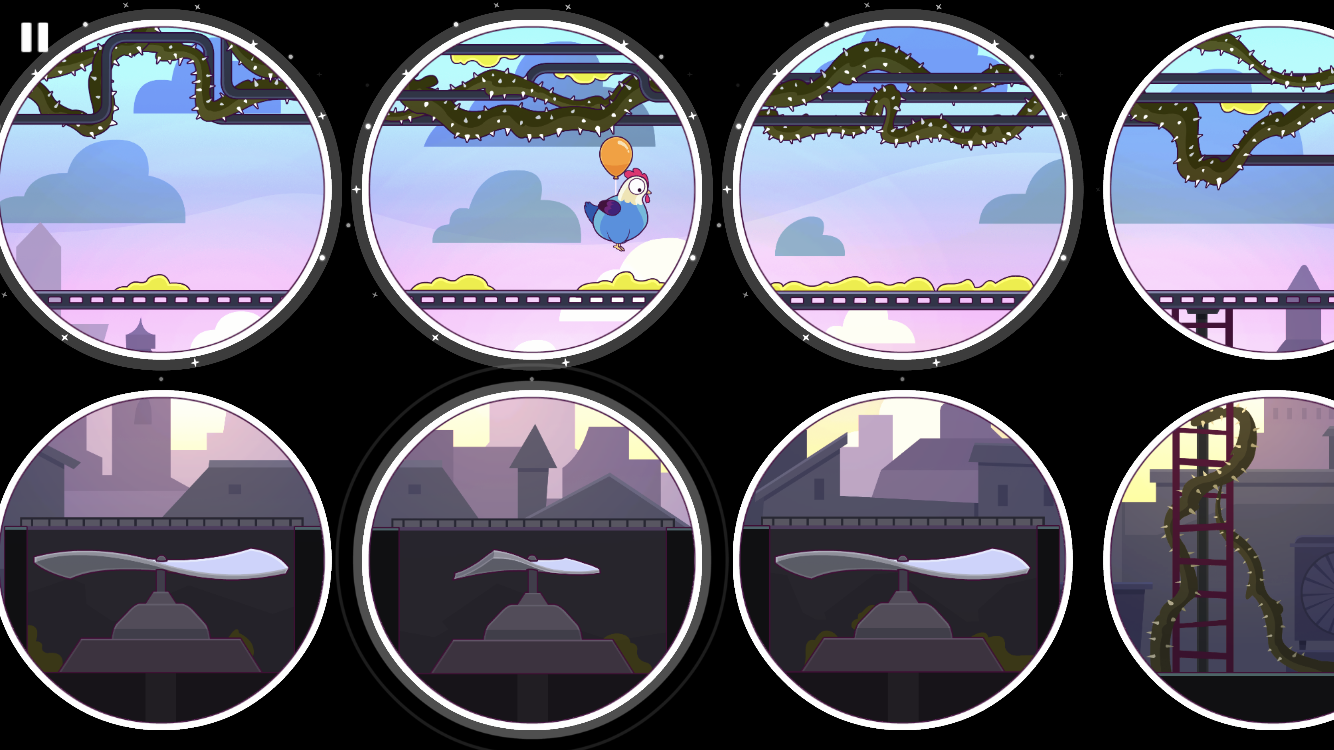 For instance, there’s one level where you have to continuously tap at the right moments to keep the chicken floating above sticky slime without hitting the thorny vines above, kind of like Flappy Bird. I was very close to calling it quits there because I find challenges like that overly demanding. Another has you running between two mole holes and the timing is so tight that you can’t be a millisecond off or he’ll block your way. There are several that involve stopping a falling chicken mid-air. There’s also no way to skip a level you’re struggling with, so if you can’t pull off the tight timing required, you’re stuck there and won’t see what other delights the game has to offer. 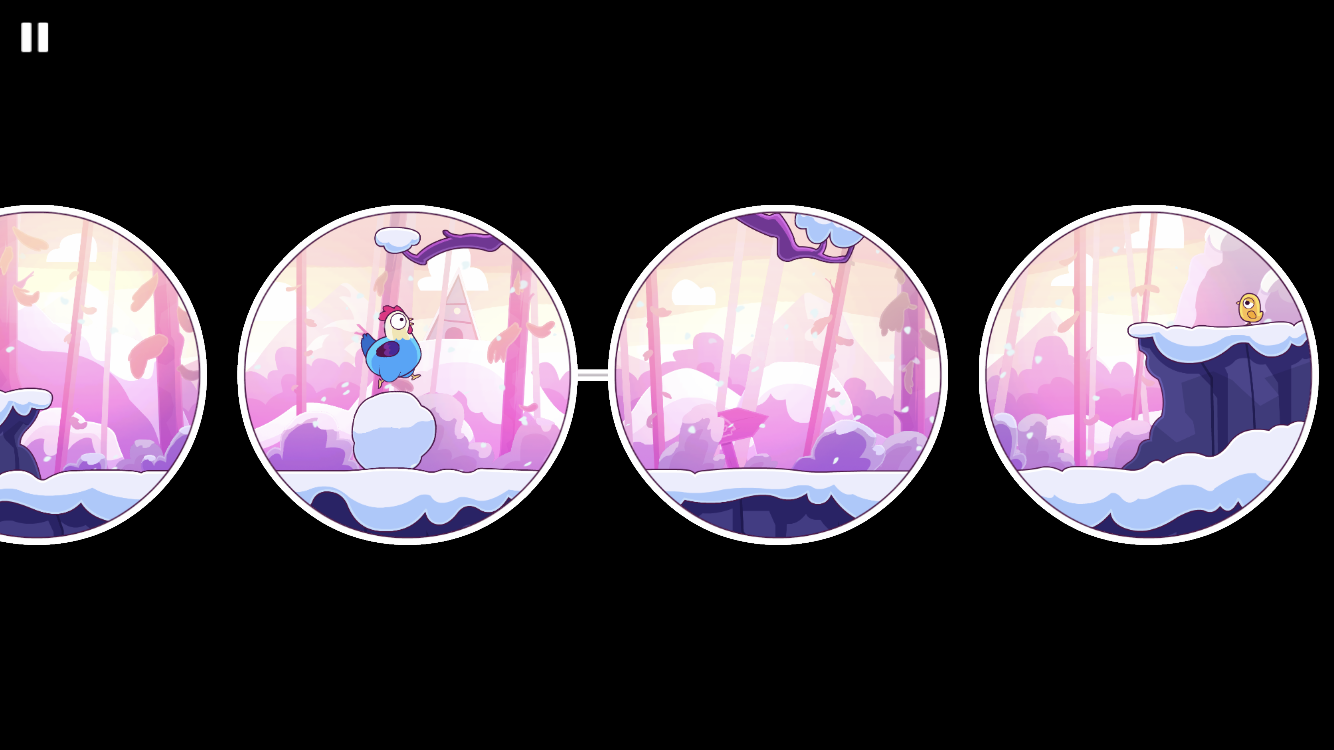 I like so much of what All of You does, but I think it’s unnecessarily punishing at times. All of the reflex-based puzzles would be just as clever and exciting if the timing was loosened up a bit and allowed more room for mistakes. For me, at least, the fun was in discovering the solution, not spending another ten minutes or so trying to pause and play at the right millisecond. It’s advertised as an accessible game, but I fear a lot of people won’t see it through to the end because of its demanding nature. It also doesn’t help that sometimes you have to drag the screen to see the rest of the frames while you’re busy trying to tap at the right moment. Aside from that, there’s also a bug that causes the achievement notifications to pop up after every level, but I expect that to be fixed in an update. 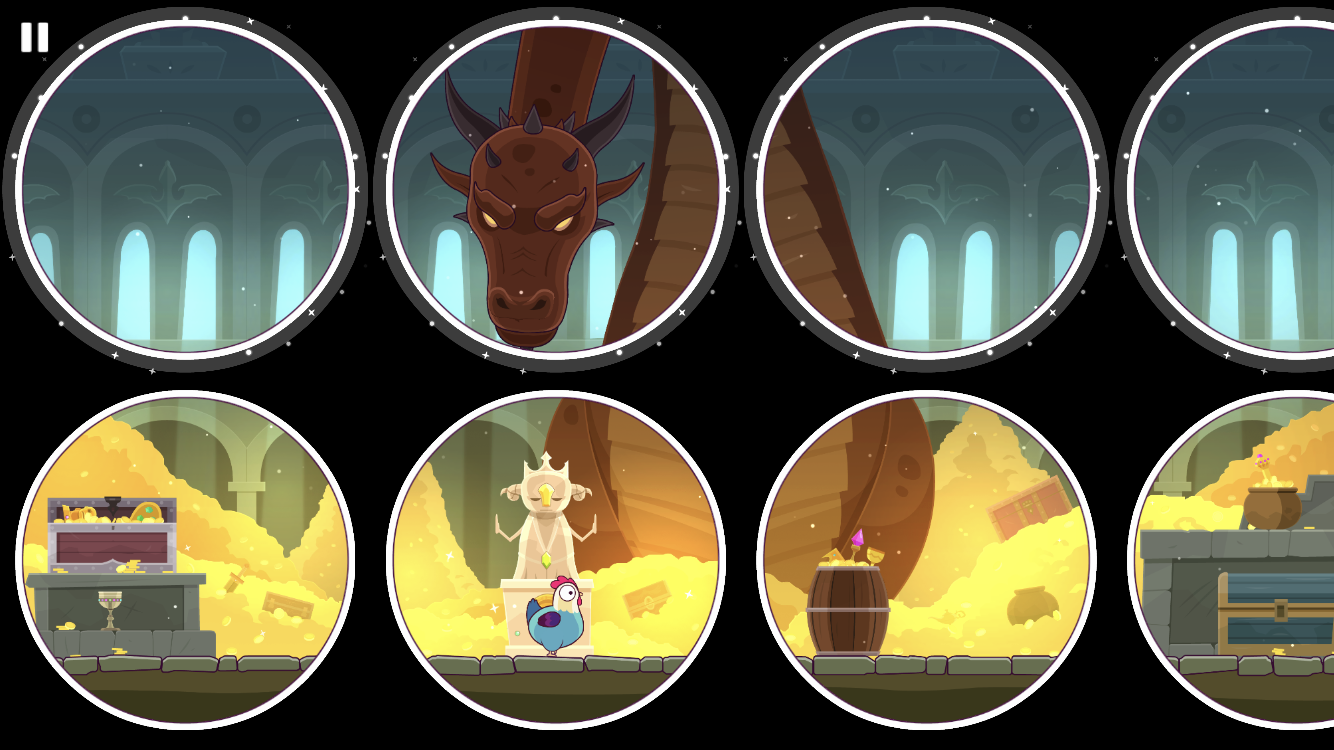 I wish I could recommend All of You wholeheartedly. After Bring You Home, I was looking forward to it, and it does pay off in many ways. But when I play a puzzle game, I expect to be excited when I complete a level, not relieved. In its current state, I would still recommend giving it a try, but I do hope that the developers at least add a way to skip levels so those who don’t want to deal with the more demanding ones can still experience the rest of the game. There’s so much to like here and it’s a shame that more attention wasn’t given to accessibility in a game that’s otherwise very family-friendly and has a wonderful ending that everyone should be able to witness. But don’t let all my clucking deter you. Download All of You here and give the game a try for yourself.

Tags: Alike Studio, All of You, All of You Review, Apple Arcade, iOS, iPad, iPhone, iPod, puzzle, recommended, review