Her Story
By: Sam Barlow

**Note: If you haven’t already finished playing “Her Story,” turn back now. There are SPOILERS ahead!**

I’ve recently been interviewing creator Sam Barlow and actress Viva Seifert about the full-motion video (FMV) murder mystery game Her Story. If you’ve played the game (and if you’re reading this, I hope you did), you may have come across the video clips in which she sings an altered version of an old murder ballad called “The Dreadful Wind and Rain” or “The Twa Sisters.” You can watch it in this video below:

The song got stuck in my head quite a few times, but it’s still not the same as a clean audio recording. Since my readers and I wanted to know if we’d ever get a proper recording of the song, I asked both Sam and Viva about it. Originally, Viva said she might have to do it if we got enough signatures on a petition. But then Sam offered up an enticing deal:

“No plans for a proper release of the song! But it would be cute — if the game sells over a million copies, I promise to bend Viva’s arm and have a proper studio recording of the track — and give 25% of the proceeds to a charity that campaigns against murdering people for the purposes of making musical instruments.”

And Viva agreed to it, after I suggested she stream herself playing Her Story:

“Not sure I’m organised enough to stream myself playing the game…plus maybe that’s just a bit OTT! There’s more likelihood in me recording the Wind and Rain…(as Sam says…he can twist my arm if a million copies are sold and I’ll let him twist it…) ”

So there you have it. If the game sells over a million copies, Sam and Viva will record a proper studio version of the song “The Dreadful Wind and Rain.” If you’re a fan of the song and want to see this happen, start convincing your friends to buy the game! Or buy a copy for them! For your grandmother, your hamster, your twin or other personality! The game is available on PC, Mac, Linux, iPhone and iPad, so there’s no excuse!

You can also purchase the game from the official Her Story site.

You can read the rest of the interviews with Sam and Viva here. There’s a lot of interesting little tidbits, including Sam’s wariness of strangers offering drinks and how they felt like they were in a real police interrogation while filming.

See my other Her Story-related articles here. 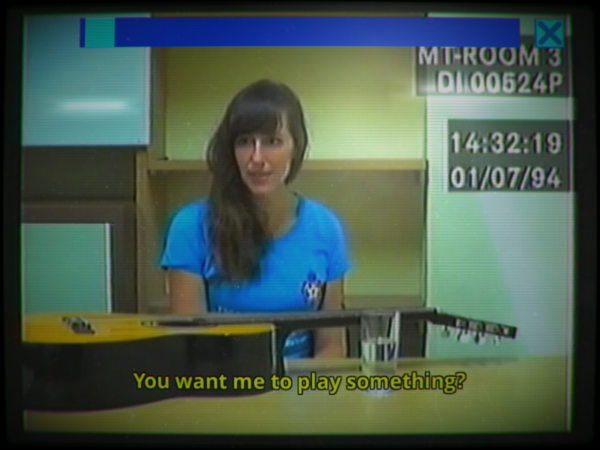