Last week, I played Dead Synchronicity, a disturbing point-and-click adventure that really sucked me in. As much as I liked it, I’ve been in the mood for something lighter like Broken Age. Deponia, by Daedalic, the same publisher for Dead Synchronicity, is a comedy and one that I was looking forward to playing based on the 2D hand-drawn artwork I had seen.

Unfortunately, the game did not pull me in the way other point-and-click adventures have. From the very beginning, I found myself groaning more than laughing. Still, I wanted to try and give it a chance. I spent over sixteen hours with the game before I gave up and decided to just write about my experience so far. About five of those hours were spent in the first area simply because it simulates a messy room so well. I knew what I was missing, and I thought I checked every hot spot ten times, but it turned out to be in the one spot I only checked once and hadn’t realized I didn’t take the item. 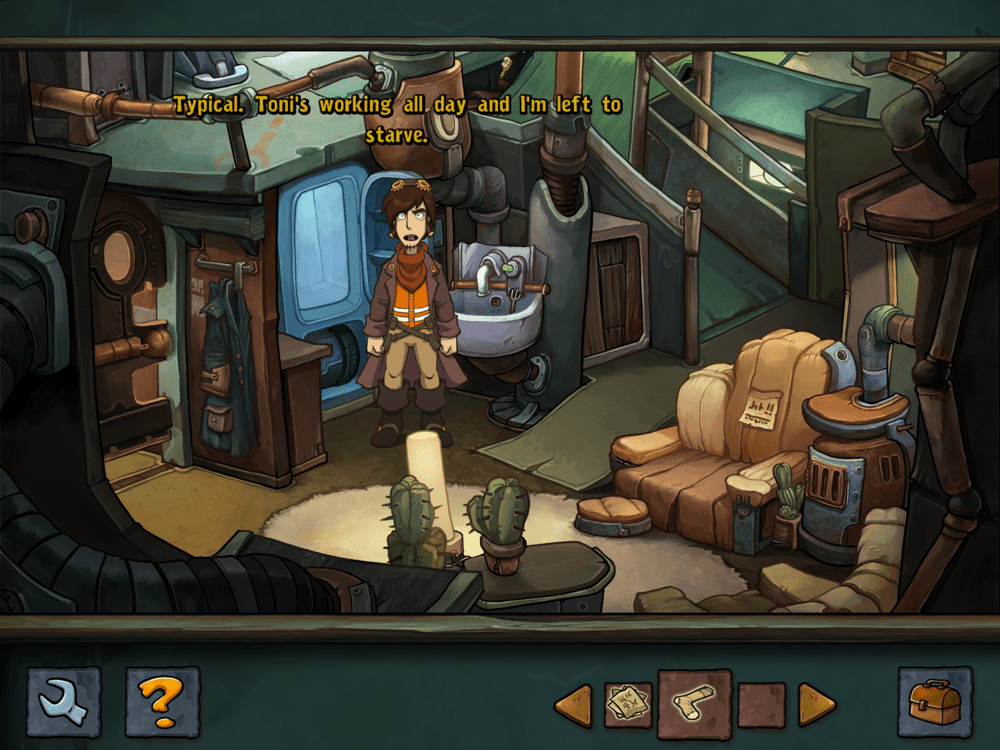 My main issue with the game is the protagonist, Rufus. He’s a self-proclaimed lazy slob who doesn’t work and just complains all day about how his (ex-)girlfriend doesn’t do enough for him, despite the fact that she supports both of them. He wants to get off this trash heap of a planet called Deponia and head to Elysium, where everyone’s supposed to be rich without having to work. I don’t think the developers expect us to sympathize too much with Rufus, but that doesn’t make it any easier to sit through. If I’m going to spend hours upon hours helping this guy solve puzzles, I need to care about him. From my experience so far, I just want nothing to do with him.

I usually need to feel something for a character in order to care about their plight, whether this is in a game, a movie or a TV show. I gave up watching Mad Men when I realized that I abhorred all the characters and didn’t care one iota what happened to them. This is even more problematic in an adventure game, because it’s up to me to help this guy achieve his goals. I have to care about him and his mission if I’m going to put in that effort. And I don’t. 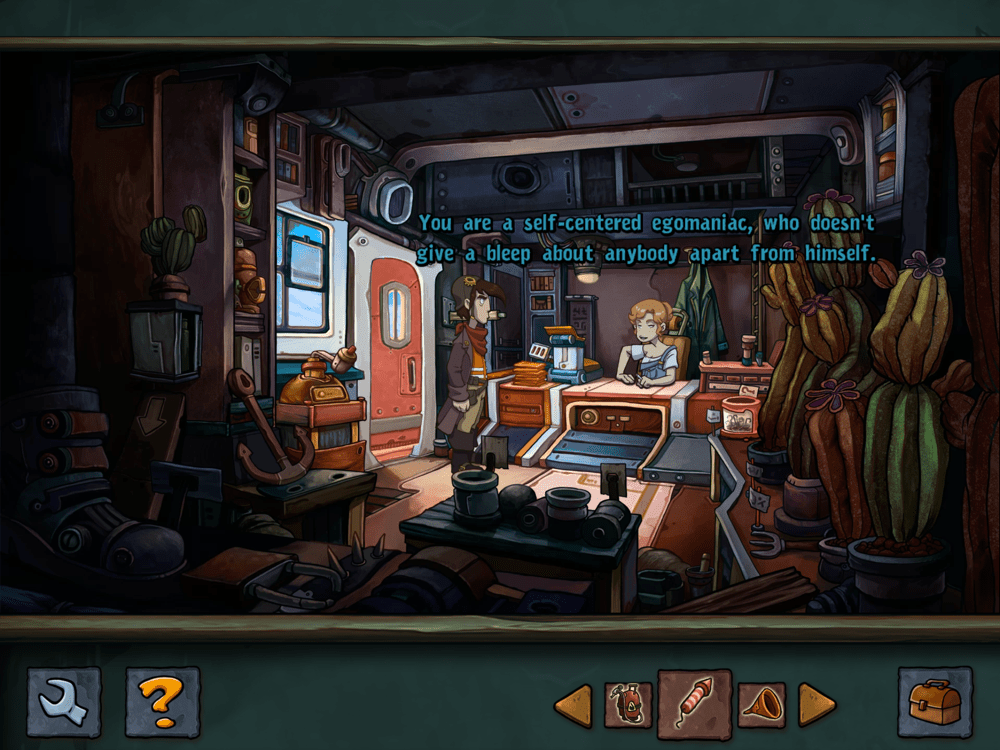 But Rufus isn’t the only problem with the game. There’s also a man dressed as a woman, called Lotti, who plays a secretary. He keeps trying to speak in a high-pitched feminine voice but always reverts back to his low, masculine voice. This might be funny if it had some context — for instance, is he playing a woman because they would only hire a woman for the job? Does he just like to dress up as a woman sometimes and is doing so at work because his wife won’t let him do it at home? So far, I’ve yet to see or hear anything that gives it context, so I’m just confused instead of amused. You can see what I mean around the three-minute mark in this video below:

Now, don’t get me wrong — there are some fun characters and moments in the game. Gizmo — who acts as the Kuvaq town doctor, police force and firefighter all in one — offers some genuine comedic relief and the puzzles related to him are pretty entertaining. There are also some story bits that are slowly revealed which make Rufus a bit more understandable and relatable, if not terribly likable. The one part that captured my attention was the fact that his father used to be the mayor before he abandoned both the town and his son. This is one part of the story that I’d actually like to find out more about. The problem is, the rest of the story, the dialogue and the puzzles are just not holding my attention. I don’t think I can push through just to find out what happened with his father.

My estimation of Rufus also improved slightly when he agreed (somewhat reluctantly) to help the damsel in distress, Goal (what’s with that name?), get a message to her fianc╬ô├╢┬ú╬ô├«├ë, something that wouldn’t benefit himself. But I got frustrated with the puzzles at that point and felt like I wouldn’t be getting through this game without a lot of walkthrough help. And I wasn’t enjoying it nearly enough to warrant that. Maybe I’ll just read up on what happens to them all.

I should also point out that while most of the jokes fell flat for me, there were some really good lines. I particularly like the scene about the postal service cats that you can see in the video above. The game is also fully voice acted and the characters are captured well by the actors. They fit the comical point-and-click adventure roles that they’re meant to represent. 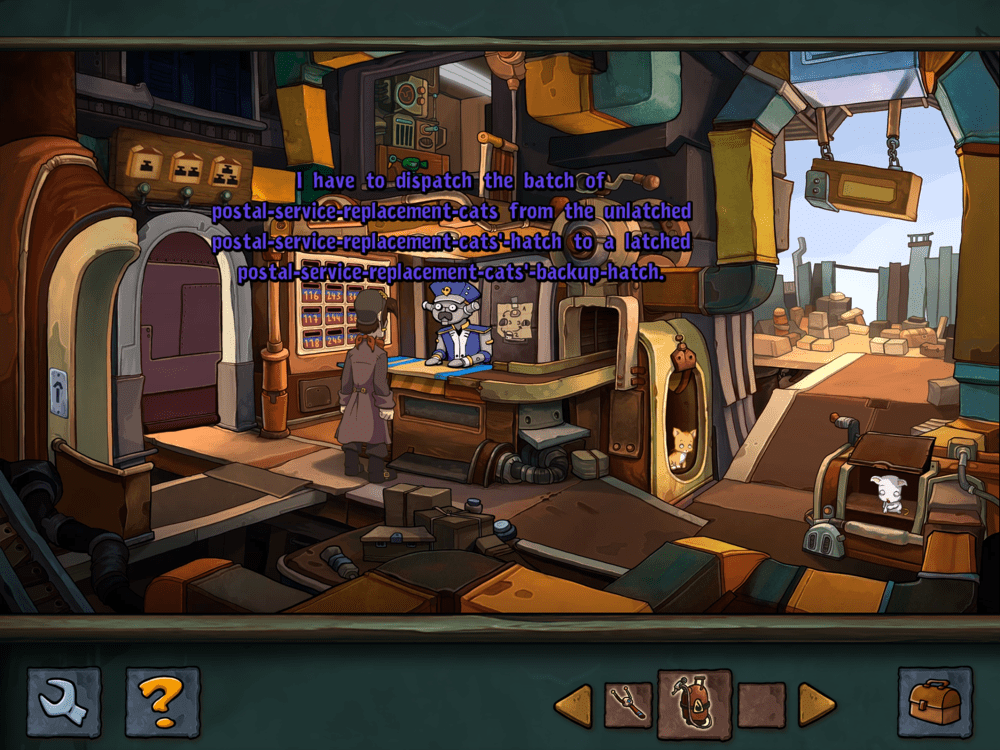 Those looking for challenging, multi-part puzzles will be happy. There are some real doozies in this game, and I don’t think I even completed half the game. But if you get frustrated easily, you might be turned off. On top of the weak characters and dialogue, the puzzles mostly felt illogical, and not the least because of the feedback when you interact with an item. It’s often completely off the mark, making things even more confusing. For instance, Rufus claims to be a “gifted lock-picker,” but never has the right tool for the job. There are several times I can try to pick a lock. But he says the same “Damn. That would have been a piece of cake with the right tool,” whether you try a drill, a scalpel, a fork, a dart….or even a lock pick! In the end, for some of these locks, you need the actual key! Other times, the text feedback when trying to combine items just felt completely off, ruining the fun of trial and error. 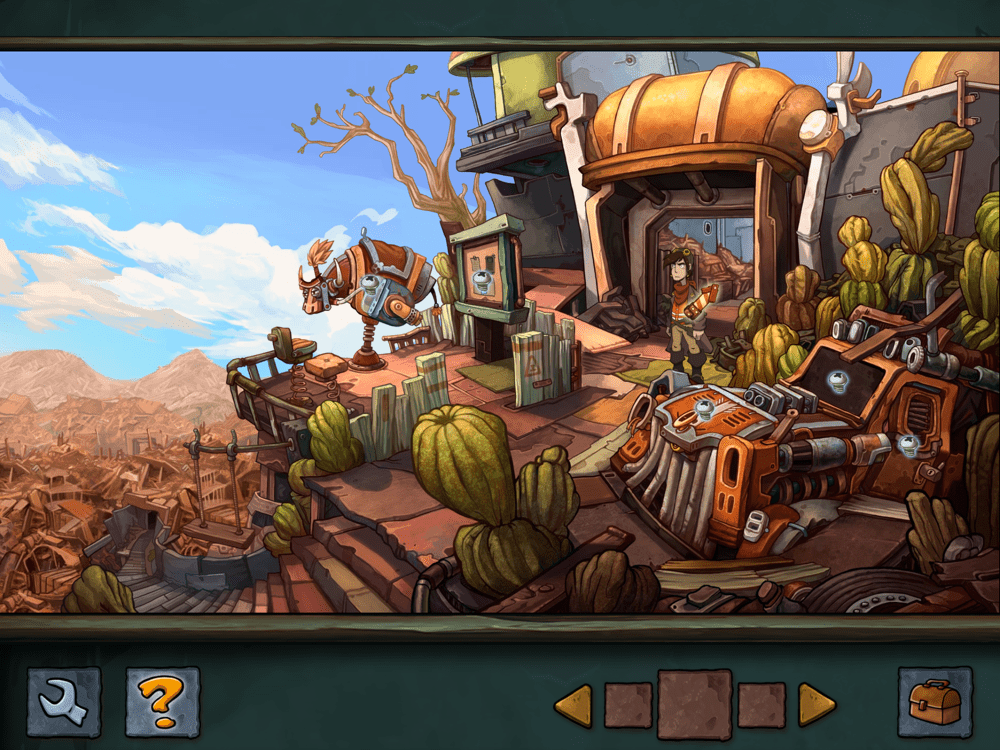 The controls are also a little awkward at first. You have a full-screen inventory that can be opened for combining items and seeing their description. This felt cluttered — perhaps intentionally, so as to match the trash-filled environment. But you also have a mini inventory at the bottom of the screen that shows up to three items at once. You use the arrow buttons to scroll through them and find the one you want to use. The middle one is the active item and you can then tap on any hotspot and use that item with it. You can also drag that item to a hotspot. In the beginning, I kept trying to drag any of the three items, and got frustrated when the left and right objects wouldn’t drag. But I eventually got used to it. Still, even sixteen hours into the game, I feel like I waste too much time fumbling with the controls. I do appreciate the mini inventory on the bottom of the screen, but I wish it had been implemented better. 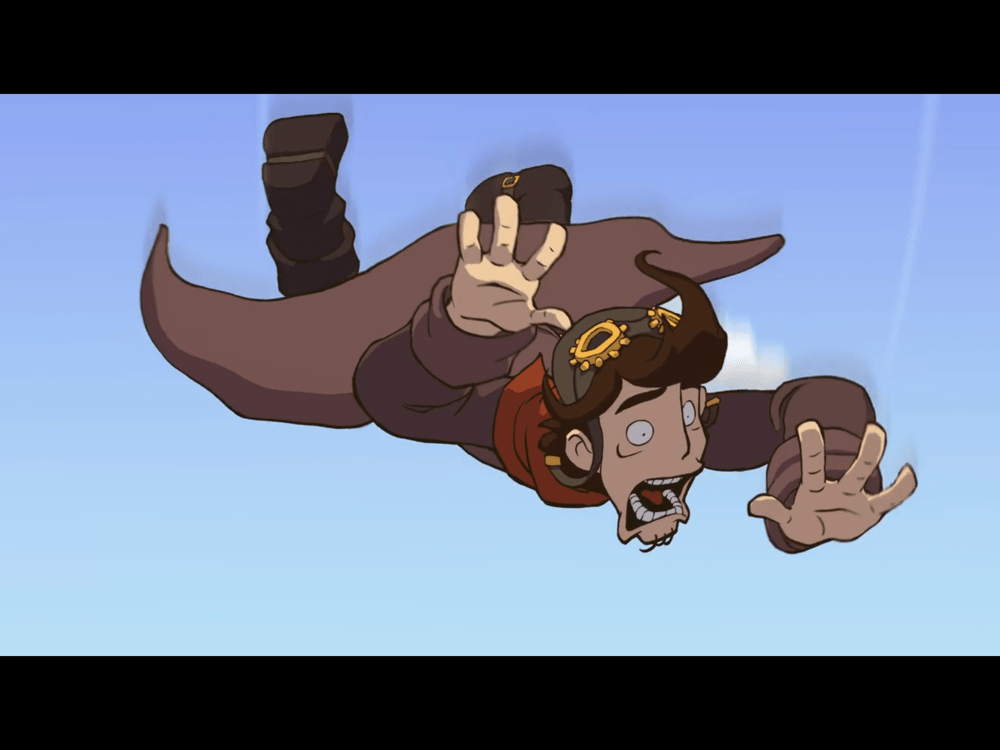 It’s possible I’m simply not the target audience and that others will enjoy the game a lot more than I did. Perhaps some will feel a stronger connection with the self-obsessed Rufus and his desire to get off the planet of Deponia. Those who do enjoy the story, dialogue and characters will definitely get their money’s worth with it, as it appears to be quite a long game chock full of puzzles. If you think it sounds like something that’s up your alley, you can download Deponia here.