The Room Three
By: Fireproof Games 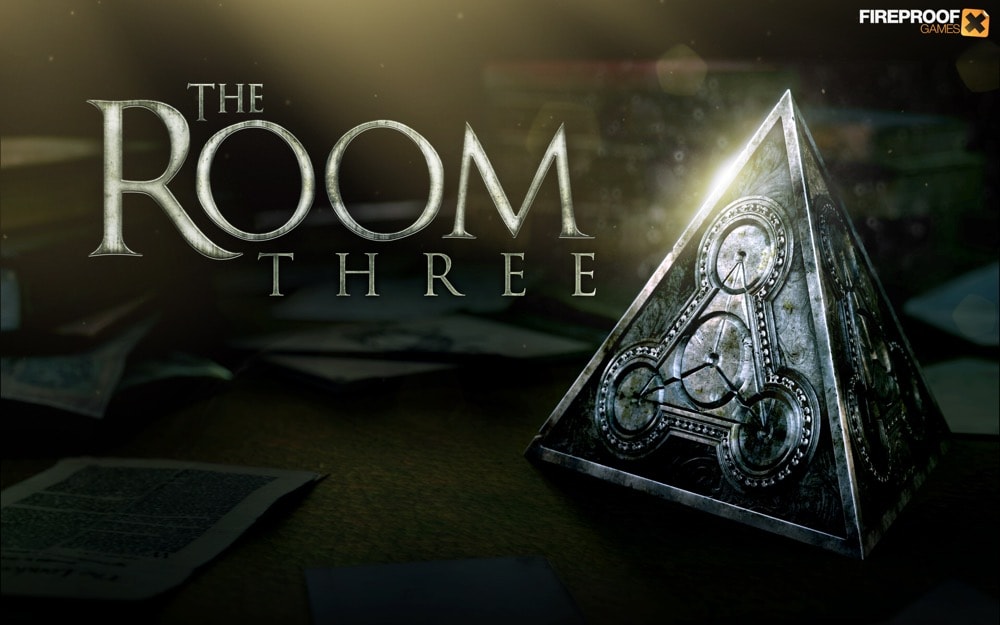 I didn’t have an iPad when Fireproof Games’ original The Room was released as an iPad-only game. I finally got to play it, but only the Pocket version on my small iPhone screen. The Room Two was also released first for iPad, then got a universal update a bit later. So while I played and thoroughly enjoyed both games before, I never got to experience them the way they were intended. Therefore, I was anticipating the The Room Three‘s release, but not as eagerly as I should have been. I didn’t realize what a delectable treat I was in for now that I have an iPad Air 2. The Room Three looks so good that it’s hard to express it with words. Photos can’t even do it justice. I played a bit on my iPhone, and it works beautifully, but I immediately went back to the larger screen so I could see every glorious detail of this beauty. 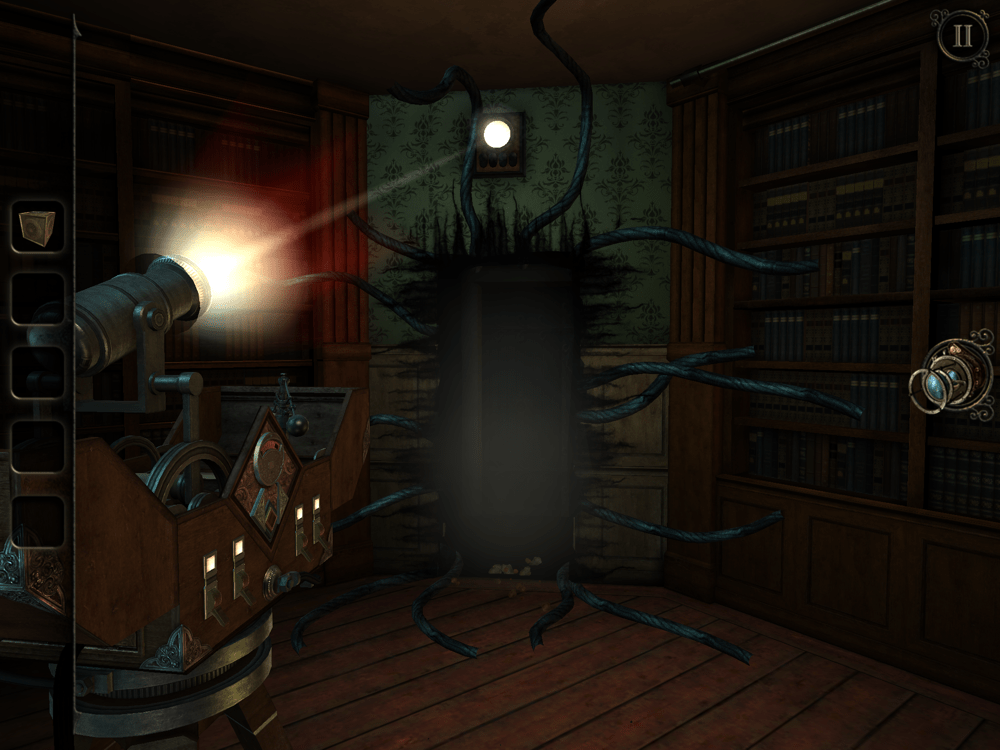 After finishing my walkthrough for the third game, I decided to go back and play the first two again, this time on my iPad. I didn’t realize until then how much continuity there is between the three games. The Null symbols and tentacles are present in all three games and each one expands on the last one, picking up where it left off. For instance, the second game ends with a murky, menacing-looking fountain, which plays a big part in the third game. I even compiled all the letters from the three games so I can see how the story plays out. I noticed when replaying the first one that it says in one of the letters, “there are rooms EVERYWHERE.” The entire first game takes place in one room, so that had to be written with future games in mind. The Room Three definitely fits that description, which means they were planning something grand from the very start. It also leaves the game open for a fourth installment with even more rooms, although the four alternate endings can easily be considered the conclusion if Fireproof decides they want to move on to something else. 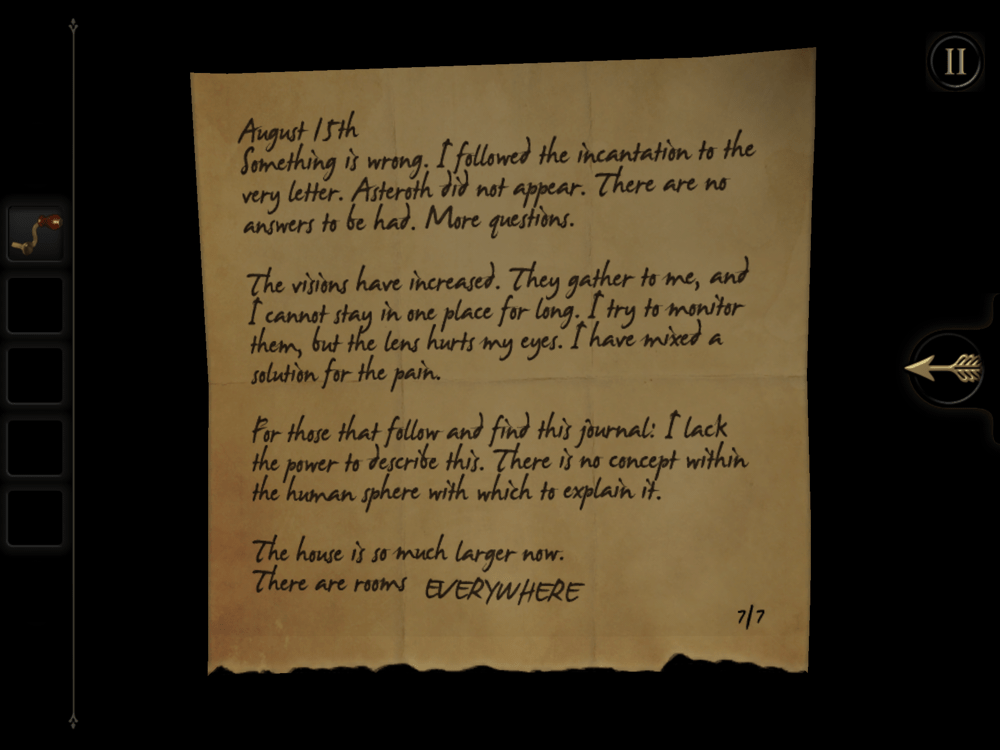 The first chapter of The Room Three is breathtakingly beautiful, and it’s fairly long, too. But it felt very straightforward. I didn’t have many moments where I was scratching my head trying to figure out the next step. Usually one thing would lead to the next without much question. Now, don’t get me wrong — everything still felt magical. Twisting and sliding and popping things open with the touch of a finger was more than satisfying, especially with the sound effects to match every single action. It’s a very tactile experience that few, if any, games can compete with. But for the first chapter, it’s more about pulling and prodding and poking at things than pondering them. It’s also very spread out and had me worrying that the developers might have sacrificed cleverness for the sake of scope. For instance, much of it involved simple actions like, “hmm I have this piece shaped like a rectangle and there’s this hole shaped like a rectangle. I should probably put it in that hole.” And had the game stopped after Chapter 1, I probably would have been disappointed. But the game is massive and the rest of it does get trickier. Everything is still very logical in the other chapters, but not quite as obvious as in the first. And what the game lacks in difficulty compared to the first two games, it more than makes up for in presentation. 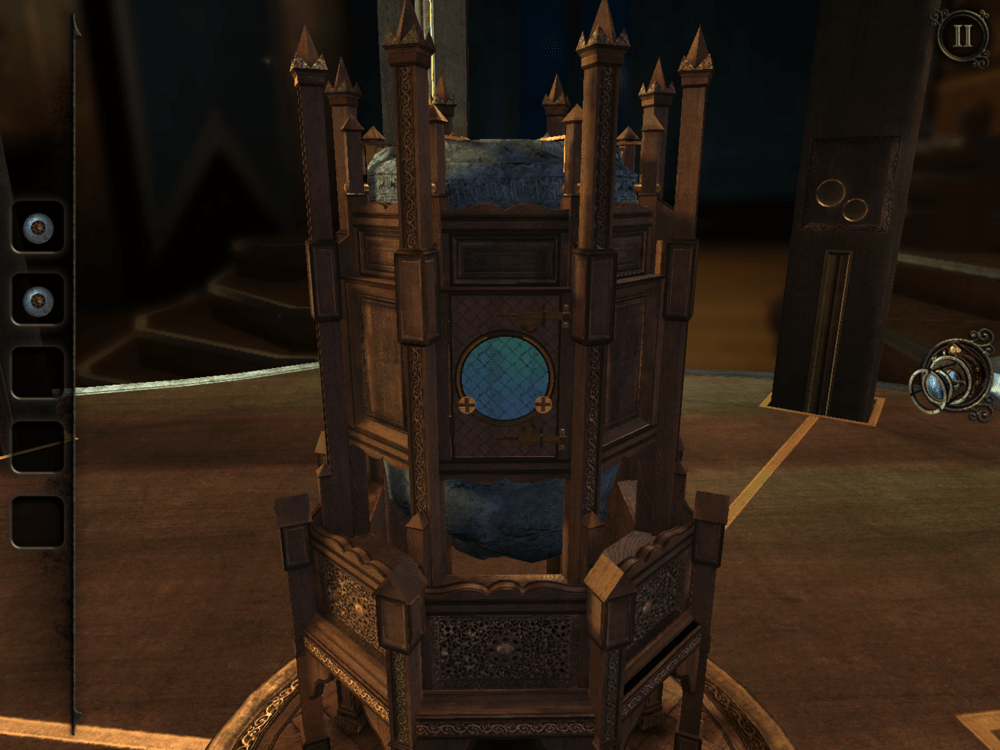 The game also introduces a new mechanic which allows you to go inside locks and tiny model buildings to solve more puzzles. If you see shiny particles near an opening, it means you can equip your eyepiece and look inside. Those who played the first two games might remember that you used the eyepiece to see things that were hidden to the naked eye. Besides puzzles that required the eyepiece, there were also clues like fingerprints and arrows that let you know you should pay attention to some detail. It meant you needed to equip it often to make sure you didn’t miss anything. While this is still used to some degree in The Room Three, it’s much less common. A shiny rainbow surface or particles usually tip you off that you should equip the lens. Perhaps this is more a blessing than a curse, though, because the game is much bigger and it could become tedious if you had to spend more time looking at every detail with the eyepiece on. Those who loved the more challenging aspect of the first two games might be disappointed with this, but it does make the game more accessible to a wider audience. 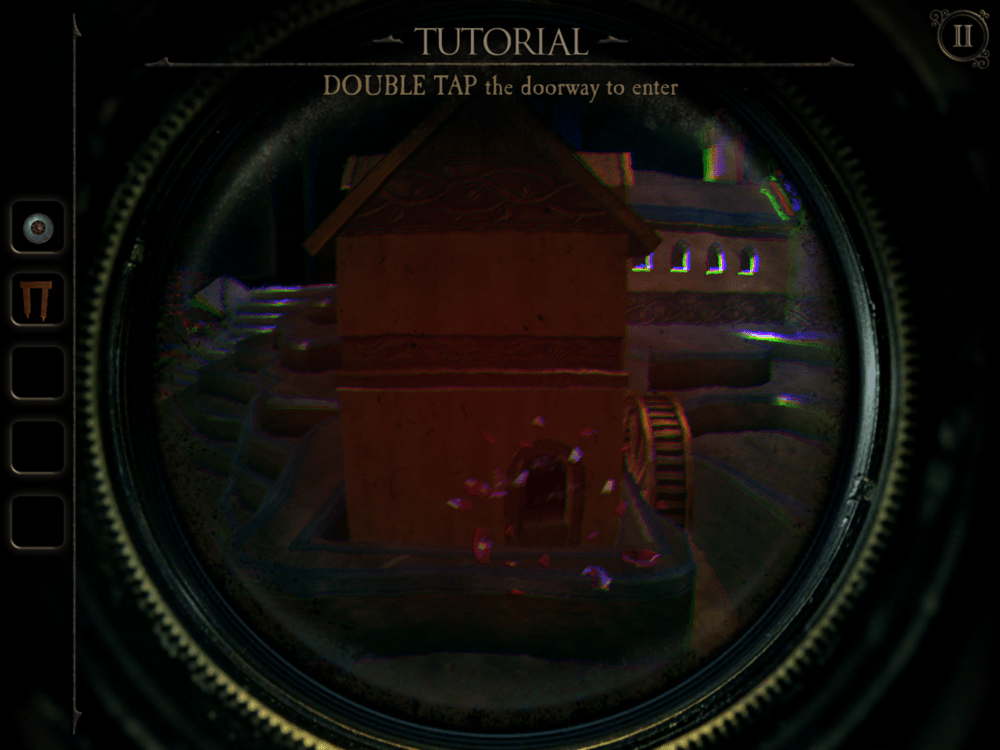 If you do get stuck at any point, the game features the same flawless hint system as the previous two games. They come in tiers, first as a slight nudge and then offering more information if you ask for it. While the hints system is designed extremely well, I still recommend trying to figure out everything yourself and only resorting to hints if you’re truly stumped. The game is most rewarding when you solve the puzzles yourself. 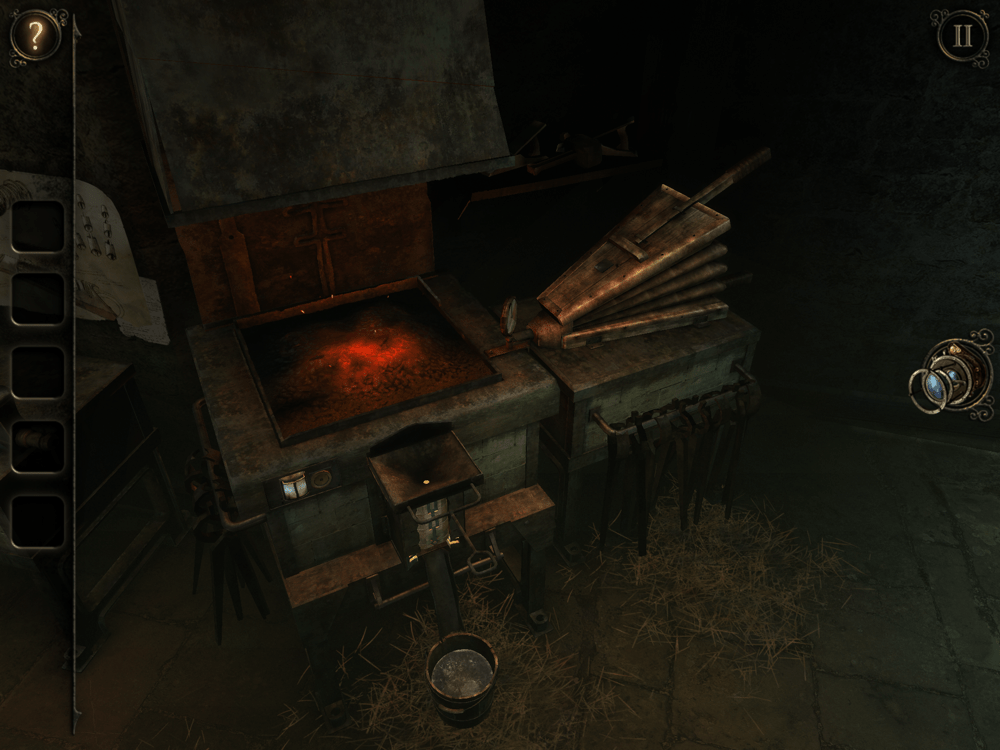 The first four chapters each take you through a new area with its own theme, which you complete and then never see again, like in The Room Two. Each chapter features a different environment and some even take you outdoors. The Room Two takes you outside as well, but very very briefly. You’ll get to see more of the outside world this time, but you never truly get to explore it. And the game keeps to its dark atmosphere by making sure it’s always nighttime with the moon in the sky.

Some of the chapters have multiple floors to explore, which is something else we never got to see before. Things are more spread out and it feels like a full-blown adventure game this time. Any of the first four chapters, or even the bonus content, could have been a game on its own. But even though it’s so much bigger, they somehow managed to improve on the visuals of the previous games. The amount of detail and realism is just astonishing. Every material and every surface have been so meticulously designed that you can almost feel them. 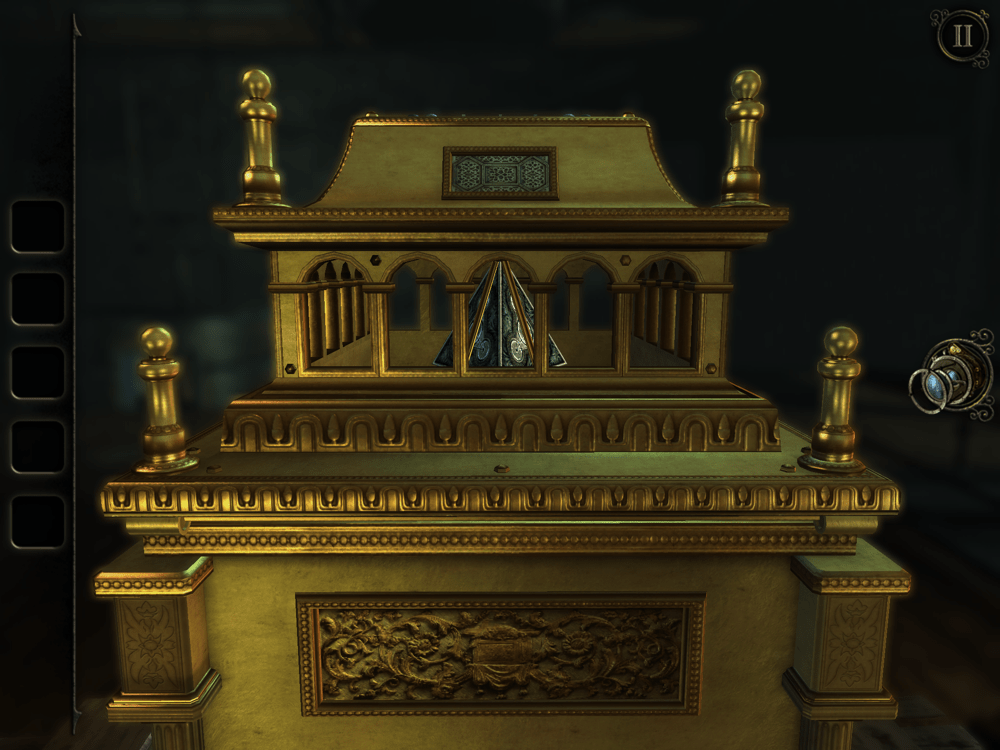 What really sets the game apart from the first two is a sort of home base that’s centered around a magic fountain and expands with each chapter. There are clues, items and puzzles hidden throughout and you really need to keep a sharp eye on things to find them all. It’s up to you if you want to look for them as you go along or wait until you complete the main story and then focus on them in order to find the alternate endings. Either way, it adds a lot more content and a bigger challenge, since things are spread out across a number of rooms and there are no hints to help you out. You’ll feel pretty clever when you solve these puzzles. But if you miss a small detail, you will likely find yourself running around a lot, trying to figure out what you missed. This can get a bit tiresome, as there’s no way to fast-forward through the walking parts. But if you have to keep seeing something over and over again, at least it looks this gorgeous. 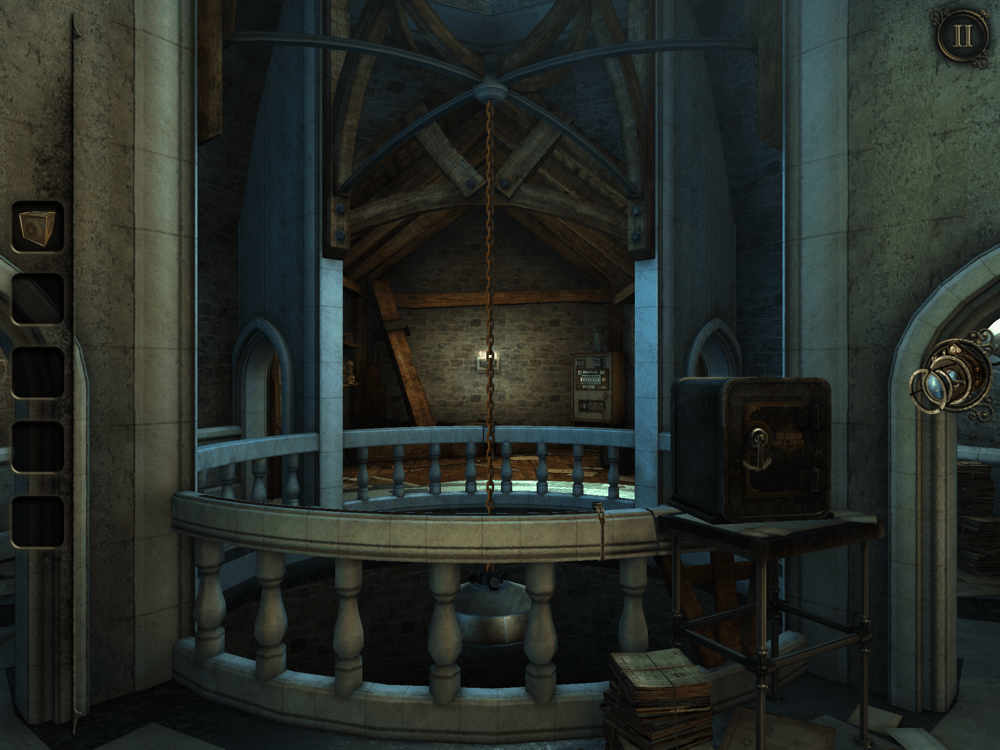 The final chapter and alternate endings also force you to repeat the same puzzle over and over again with small changes. This, too, gets repetitive and requires a bit of patience, but it’s a small issue for such a polished, well thought-out game. Any cumbersome or repetitive parts of the game can be easily forgiven.

If you like puzzle games at all, this is an easily recommendable one. Fireproof must not be very popular with other iOS developers after this release, because it raises the bar so high. I can’t think of another puzzle game that compares in scope and polish. There’s so much detail and so much realism. You can tell this is a work of love, not something meant to make a quick buck. The bonus content after you complete the main story is bigger than many developers offer as an entire game. So what are you waiting for? Clear out your schedule and spend some quality time with The Room Three. You can download it here.

If you’re already playing the game and need some help, try my complete step-by-step walkthrough.