Welcome back to the second installment of My Week Unwrapped, where I discuss all the games I’ve been playing over the past week. I’ve been sick with a nasty cold, so it wasn’t quite as busy as last week’s, but I still spent a lot of time playing!

First off, I dropped everything to play and finish Layton Hawkes’ fantastic Halloween puzzler, Puzzlepops! Trick or Treat. The original was one of my favorite puzzle games this year and this new one offers more of the same challenge but with new elements added. I highly recommend it, especially since this one is free to try. You get a tasty 25 levels to sample and can buy another 50 levels for only $0.99. So if you weren’t sure before whether it’s something you’d like, now’s your chance to find out. The original Puzzlepops! is also on sale for $0.99, giving you even more bang for your buck at 150 levels! Make sure to pick it up if you like the Halloween one. And be sure to check out my walkthrough if you’re having trouble.

I was late to the Cube Escape/Rusty Lake series of games, but have since caught up on most of them. There are still a couple of Cube Escape games I need to finish and I need to muster up the courage to go back to Rusty Lake Hotel. It was a bit too disgusting for me, so I quit early on. These are all weird, often disturbing, point-and-click games that are hard to compare to any others. But they’re all free of IAPs and the free ones have barely any ads. If you haven’t played them yet, start with Cube Escape Seasons. Or play them out of order and start with the latest, Rusty Lake: Roots. I’ve been making my way through it over the last couple of days and working on a walkthrough. It takes place in the same world as the other games, but has a bit of a different layout. You get to play through the Vanderboom family history and build their family tree as you do so. It consists of 33 short chapters, and I’ve completed 12 as of this writing. The game has so far been very logical, and I haven’t felt like any of the puzzles were unfair or overly obtuse (I did in Hotel). I might write a review when I’m done, but you can also look at my gameplay video below to see if it’s something you might enjoy. Beware, though — there is some weird, disturbing content.

I hate puke and I (mostly) hate platformers, so Eggggg – The Platform Puker by Hyper Games was not an obvious choice for me. But those colorful and quirky animations were hard to pass up on. I’ve only had the chance to play through a bit so far (see above for why) but I really like what I’ve seen. It took me some time to get used to the controls, and I still fumble with them sometimes. But what makes this different is that, even though it’s an autorunner, you can go back and search for things you missed. You can take as much time as you’d like, but must be more efficient if you want to compete with other players on the leaderboards. This may change later, but so far it seems both casual- and hardcore-friendly so everyone can enjoy it.

I also somehow missed Interlocked by Armor Games when it first released. But it’s currently free and I’ve been spending a little bit of time with it. I’m not a huge fan of the timers and move counters, but it’s a pretty solid 3D puzzler that involves finding the right order to move oddly-shaped interlocking blocks in order to separate them all. I recommend checking it out, especially since it’s free at the moment! 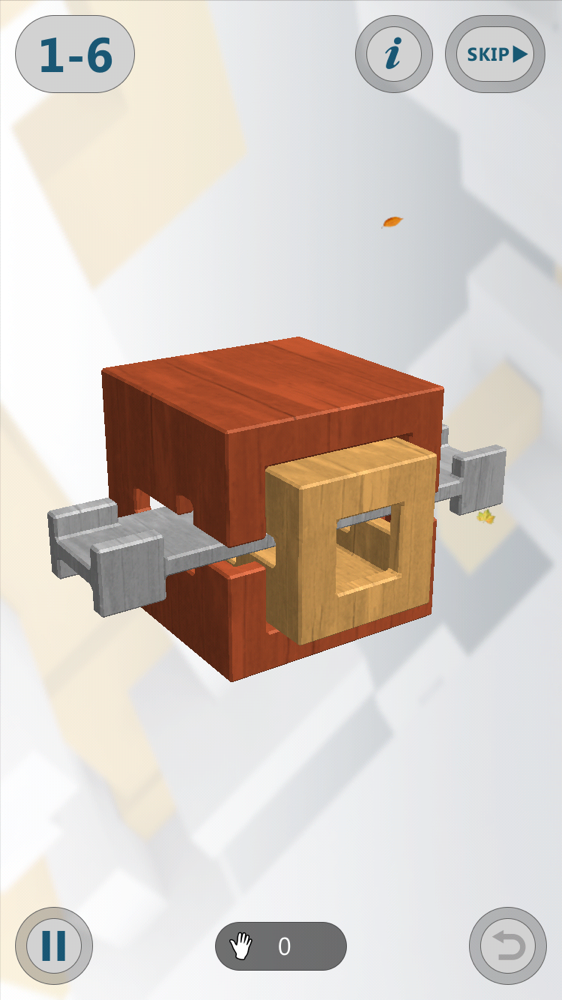 Mini Metro is a puzzle and strategy game by Dinosaur Polo Club that was recently ported to iOS from PC. It got a great reception on PC, so I was eager to play it. Unfortunately, I found the tutorial sorely lacking and my first few games had me confused. The problem is, I’m not enjoying the game enough to really want to learn all its intricacies. It’s not a bad game, but it’s just not doing anything for me. I may still give it more time before abandoning it, but I can’t personally recommend it at this time. I suggest reading up on it to find out if it’s something you might like. You can also see it in action in the video I made.

I also appreciate that the developers included iCloud sync, since it’s more enjoyable on an iPad, but still works on an iPhone. It’s always nice when a developer takes the time to implement iCloud saves for those of us with multiple devices.

I forgot to mention last week that the clever and sometimes infuriating Blackbox by Ryan McLeod got a new package of puzzles. I updated my walkthrough for them if you need help. There are only eight levels in the new set, and they mostly use push notifications in clever ways. While not a ton of content for $1.99, it’s hard to complain when so much content has been given away completely for free, without any forced ads. And if you discovered the game recently, you might have even gotten the previous paid pack for free. So if you’re enjoying the game, consider supporting the developer by buying the new Push pack! That way he can release more content!

I played a bit more of Kelvin and the Infamous Machine by Blyts. I’m still thoroughly enjoying it, but got temporarily distracted by all these other new games! I do plan to finish it, though.

I also continued my walkthrough for Beavl’s Moveless Chess, but I took a break when it was stumping me. I believe the game now got some more hints, so I do plan to go back to it when I have a moment to breathe.

And now, a little rant that I’ve been needing to get off my chest.

Even though I mostly hate it, I’ve been updating my Tricky Test 2 walkthrough as new levels are added. The game makes me angry like few other games can. That’s for a number of reasons. First, it’s a puzzle game that punishes you for trying different things. Also, for a game that tests your attention to detail and considers itself clever, there are too many grammatical errors and inconsistencies. And then there’s this — if you run out of lives, the only way to continue playing at all is to replenish them. This can be done in a couple of different ways, such as by spending coins. You get free coins occasionally but they’re also used for hints, so you don’t want to waste them. Because you will need hints, and often. The idea is that you spend real money to get more coins. The other option to replenish your lives and continue playing is to rewind three levels back. This is the most asinine thing I’ve ever heard of. It serves absolutely no purpose other than to waste your time replaying puzzles you already solved.

It’s a shame, because the game does some clever things. Sometimes I smack my head that I didn’t get the solution sooner. In different circumstances, it could be a really enjoyable and recommendable game. If it wasn’t so predatory in order to make money, it could have been fun. But instead it just makes me angry. I hate every bit of its abusive, manipulative, greedy, unfair, time-wasting setup.

For instance, take this level I’m currently stuck on. I wasted a bunch of lives already just by touching the matches. This is not the first puzzle that involves moving matchsticks, but it is the first one to penalize you just for touching them. Logically, moving one matchstick in the 6 to make it a 9 would make the equation work, as 2 + 9 = 11. But it doesn’t let me do it. I lost a life when I tried. This is just cruel. 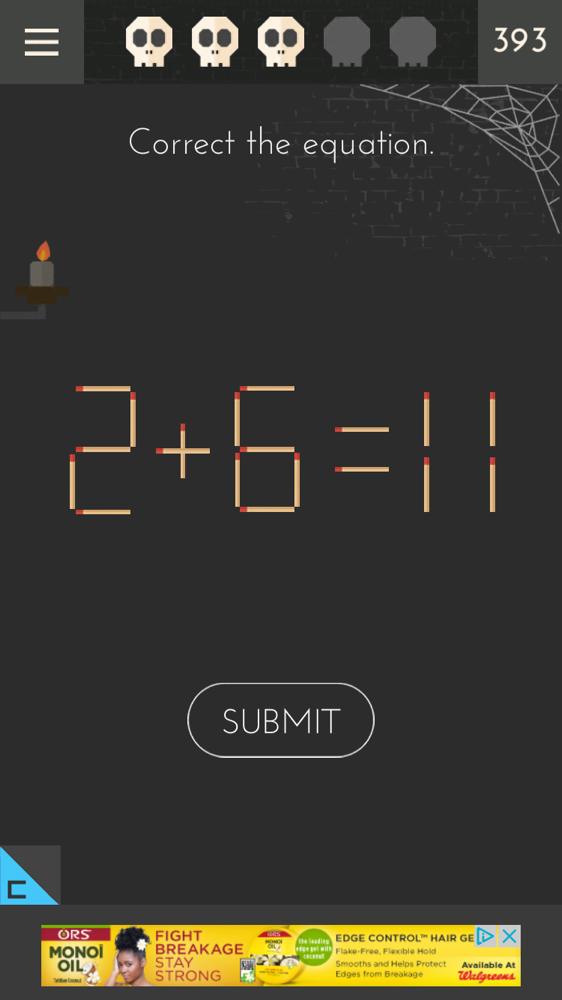 Normally I wouldn’t waste my time with a game designed to waste my time, but readers have been asking me for help so I’ve been sucking it up and playing. But this is the worst way to treat your players. If you’re sick of this abusive behavior, too, don’t reward it with your hard-earned cash. Instead, support games like Puzzlepops! or the Rusty Lake series and show developers that treating players with respect is a solid business plan.

Don’t Always Listen to Apple “Geniuses”: Try to Troubleshoot Your Own iPhone