My start with True Legacy was a bit clumsy and confusing, due to stopping every few lines to read the meanings of terms. Since it takes place in Hong Kong in the year 2084, there’s technology and jargon that needs to be explained by tapping on the word to see a definition. But I stuck with it and it wasn’t too long before I got sucked in, eager to find out more about these characters and this world.

The game begins with a messy murder scene. A government official’s head has been bludgeoned and you play as Detective Claire Thornhill, who’s investigating the murder. The future has things like decoy shrouds, which taint the crime scene with DNA from random people to confuse the system and make it harder to identify a suspect. Since so much is done by machines and algorithms in this world, there’s little room for error. Or so it seems. In any case, this is the first Truecorp employee to be killed in quite some time. Truecorp is Hong Kong’s governing body since 2054 and where most people work these days. 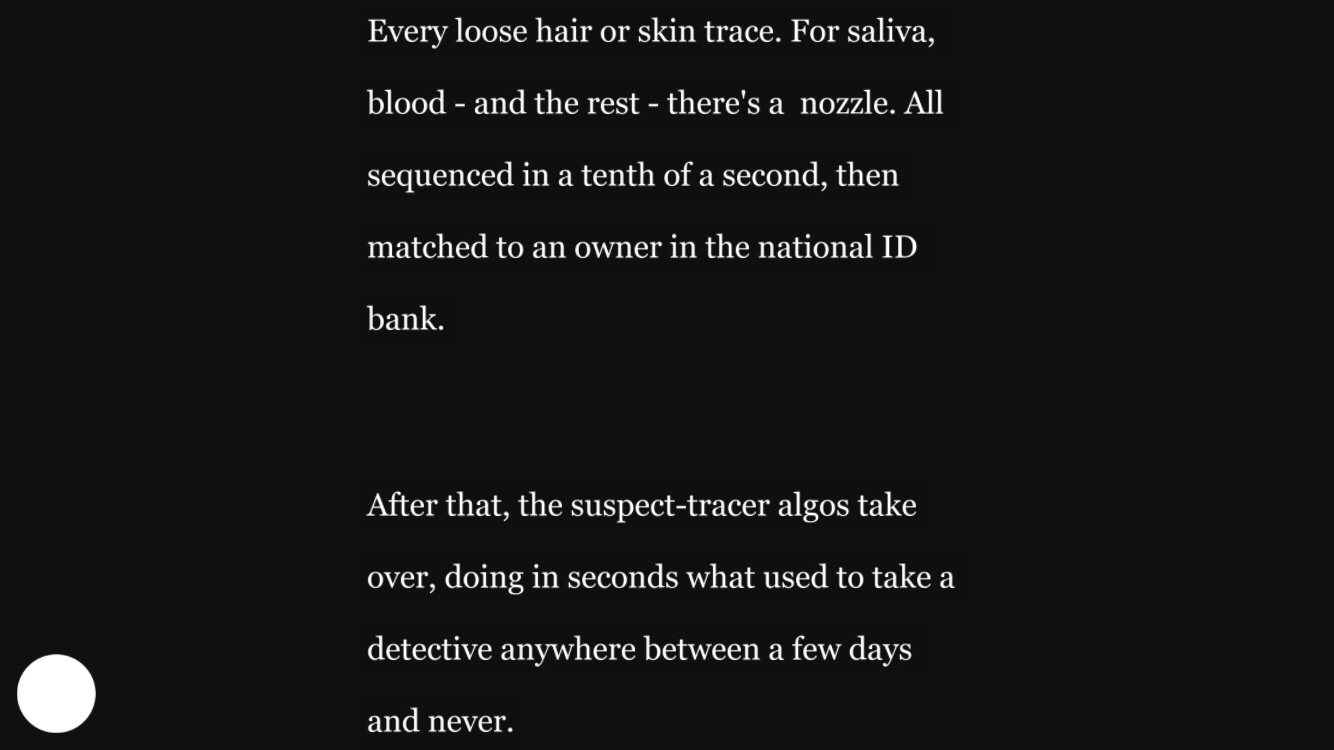 I’ve been watching Altered Carbon in between playing this game, and I was worried they’d start merging together in my head. But True Legacy is, let’s say, safer. The ideas are not as crazy as everyone having their consciousness uploaded to a small disc that can then be inserted into a new “sleeve,” or body, if your last one dies. Instead, True Legacy takes place in a less distant future, a world that’s easy to see coming. It’s one in which almost all labor has been automated by machines and very few people still have jobs. Those who do are called actives, and they’re screened by an all-knowing artificial intelligence that decides at age 18 if they’re fit for any jobs. If not, they’re logged as an inactive and will get a small basic income to survive on. Most people are inactive, making this quite the dystopian world — one that’s not all that different than our own, as Hong Kong is wealthier than ever, but only the privileged benefit from it. 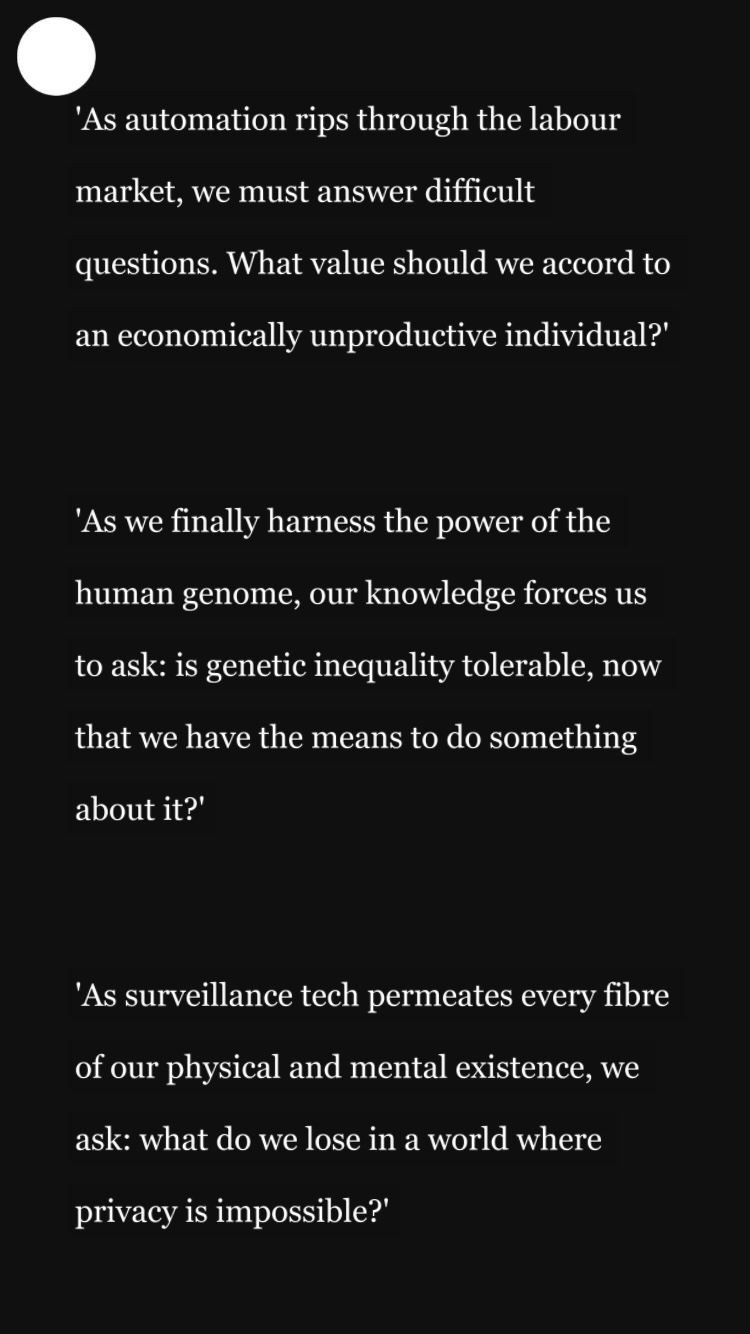 The game takes inspiration from movies and books about dystopian futures, but also from the ingenious Device 6. As with Simogo’s game, the text changes orientation to mimic the character moving left into a side room or swerves around as she’s taking a cab ride. This means, as you read, you’ll be flipping your phone around, sometimes completely upside-down or even at an angle. What it also borrows from Device 6 is its idea to mix some puzzles into the story in a way that really works. You may need to pick up a clue or item, then scroll back up a bit to use it. For instance, in one scene you need to pick up a paper cutout from one room that you’ll then use to highlight certain words in a newspaper clipping. If you missed the cutout, you won’t have it when you get to the clipping and will have to go back and get it. While the game isn’t quite as clever or elegant as Device 6, it’s still a very impressive attempt at the format. Device 6 set the bar pretty high, so I’m not sure anyone can reach it. That said, there are only a handful of puzzles in the game and a much longer story. So if you’re looking for a puzzle game, this isn’t it. It’s a text adventure with a puzzle thrown in here and there, but they blend into the story well and were always a welcome sight. 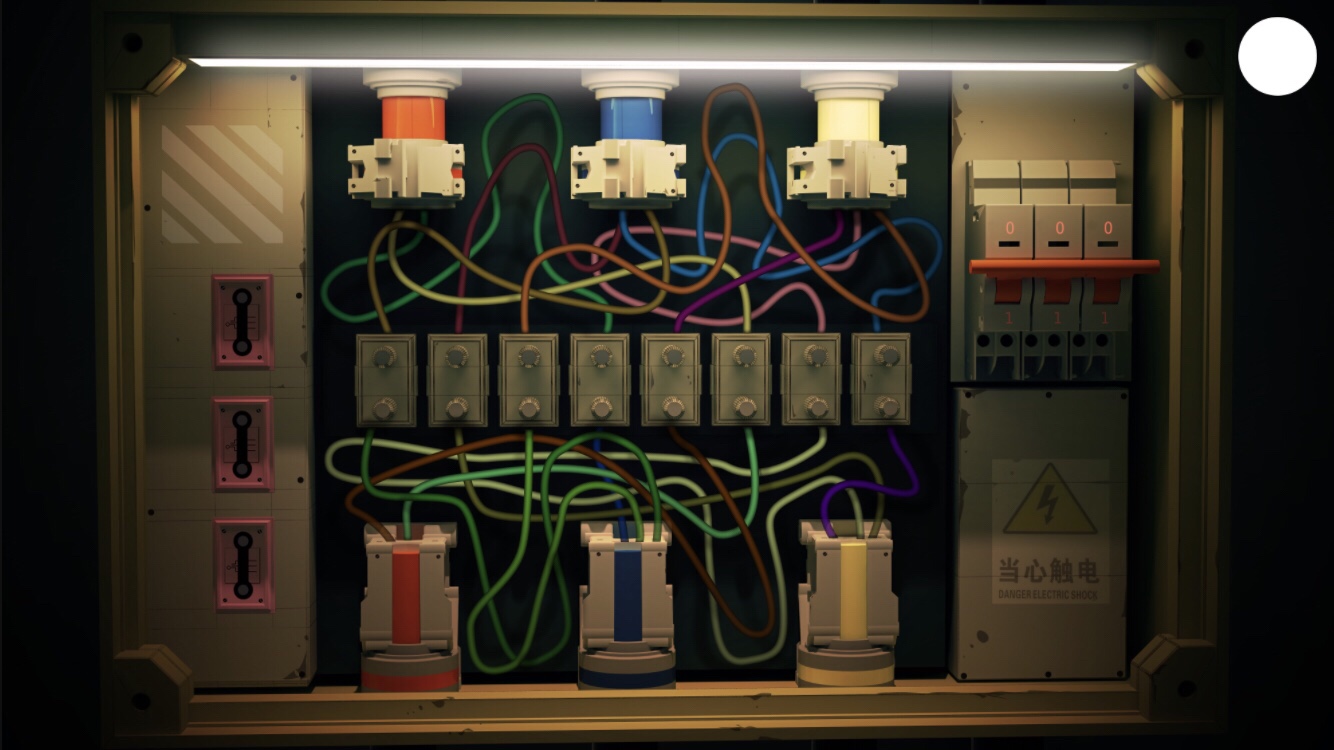 Besides the shifting text and puzzles, there’s a smattering of gorgeous artwork throughout the game. Some are still pieces with some light animation thrown in, such as raindrops or leaves falling from trees, or street lights whizzing by. I guess you might call them GIFs for a comparison. Others are still images that have a parallax effect. Early on, there’s one of the inside of an elevator and it appears to be going down as you scroll through the text. Some scenes even zoom in as you scroll down, mimicking the effect of moving closer to the environment. Since most of the game is white text on an all-black screen, I was always excited to see new artwork. On top of that, the soundtrack adds immersion through the sounds of rain falling, footsteps, a crowd cheering, machines beeping, or even just some brief tense music. It helps bring the world to life without being distracting like nonstop music might be. 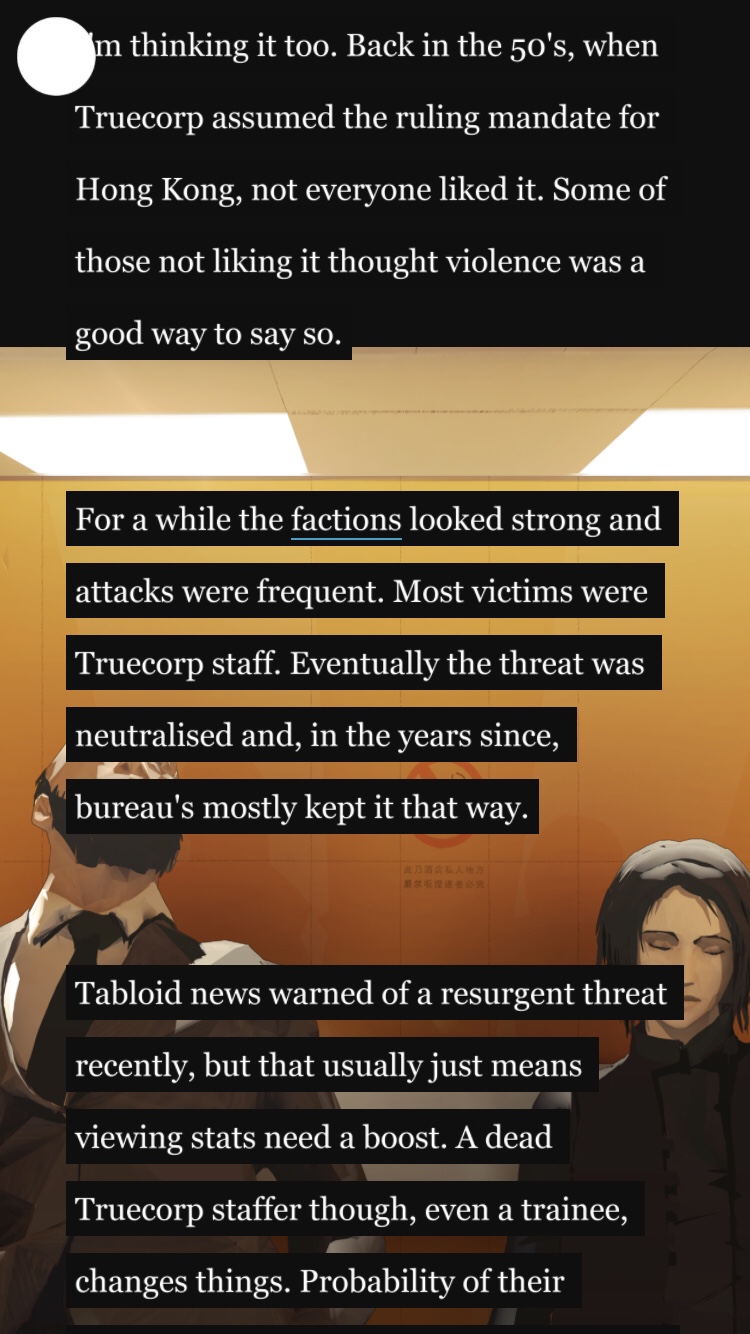 Anyway, enough about the technical stuff. Let’s get back to the story and writing, which makes or breaks a game like this. The first part that really grabbed my attention was the interaction between Claire and her father, Tate. He’s a broken man who wants to hurt his daughter as he imagines she hurt him. He was branded a terrorist for fighting against the algorithms that determine everyone’s fates. He believes in free will and is angry at Claire for working for Truecorp instead of following in his footsteps. He was never a good father, and even throws cheap shots at her while he’s deathly ill. Their interactions brought such a human element into a world run mostly by machines. 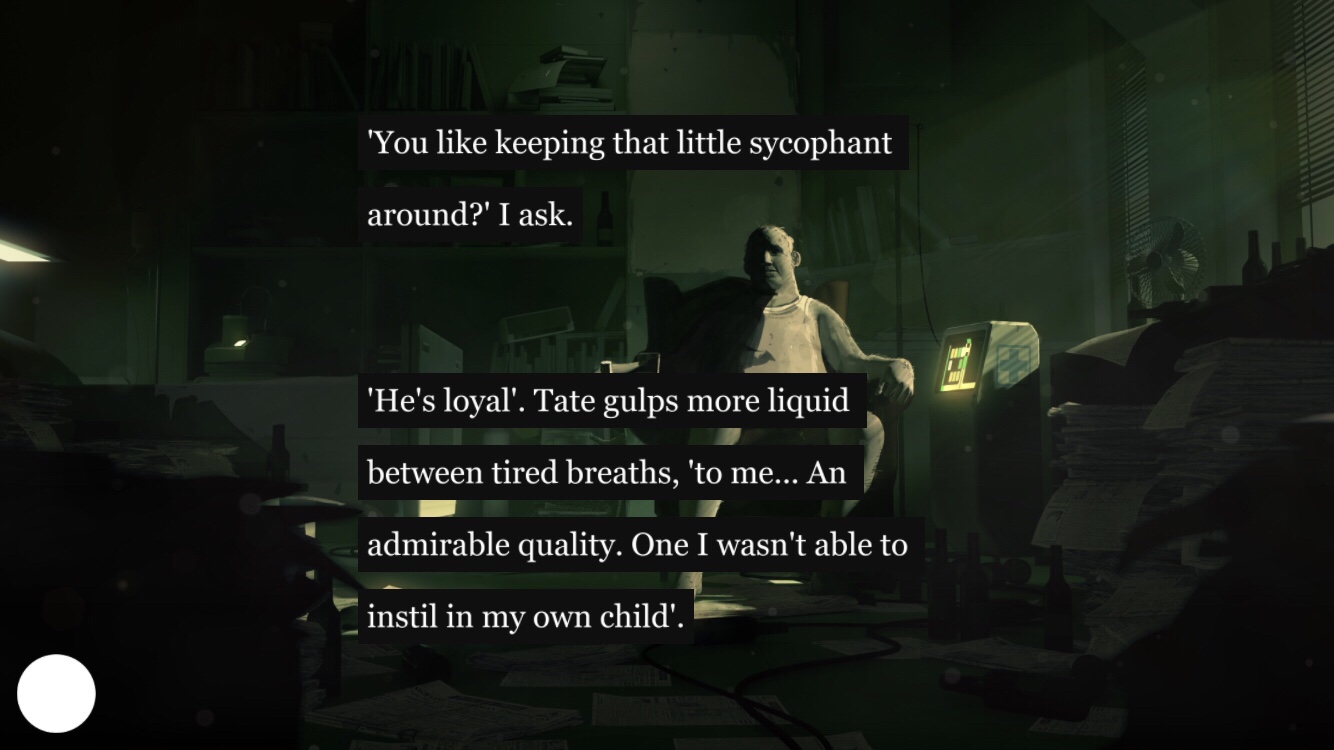 So Claire’s relationship with her father is what sucked me in, but I stayed for the mystery and intrigue. The deeper I got into the story, the more eager I was to know who killed Casey Lin and the motives behind it. I also wanted to learn more about this world in which most humans are disposable and people are willing to give up their free will in favor of an algorithm. I mean, anyone who’s used Facebook over the last few years knows that algorithms can be messy! And what exactly is True Legacy? It turns out, it’s an update for Destiny, which is what checks people’s genome and phenome to determine whether they’re suitable for any jobs. It would allow for testing much earlier than age 18, leaving people even less time to hope they might have some purpose in this life. And more time to to feel useless if they’re labeled an inactive. As you might imagine, the game raises questions about choice and free will. 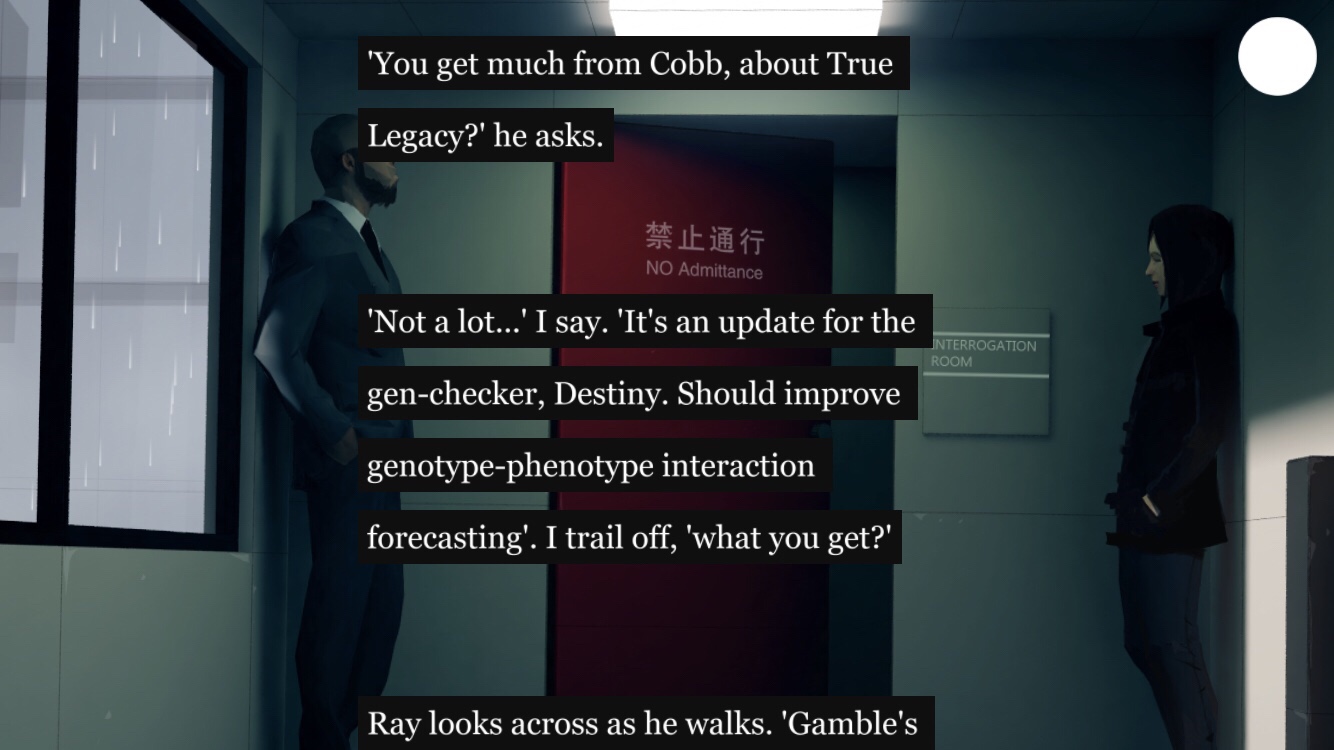 As I said, the story can be a bit slow at first, especially while you’re still learning all the terms so you don’t have to keep stopping to think about them. A glossary also would have been useful for refreshing my memory if I forgot what one of the terms meant, though some definitions are repeated multiple times. But once it picks up, it goes at a brisk pace and becomes hard to put down. I got to a very tense point late at night while I was exhausted and had to finally force myself to put it down at the beginning of the final chapter and finish it in the morning. I then proceeded to go through it quickly again so I could change my choices for some of the branching paths, especially those at the end. Folks who like alternate endings in their Choose Your Own Adventure books will be happy to learn that there are some pretty big choices to make near the end that have very different results. I would have appreciated a quick way to replay the last chapter, but at least the game lets you scroll past all the text quickly instead of forcing you to read everything on a replay. Also, on my second playthrough, I changed some of my earlier choices and was pleasantly surprised that they did in fact have a big impact. I even missed out on meeting a very important character because of one decision. It’s nice to see that in a game like this, as they’re often more linear and your choices have less meaning. Knowing there are indeed alternate paths gives the game some replay value. I highly recommend at least going back for both endings. 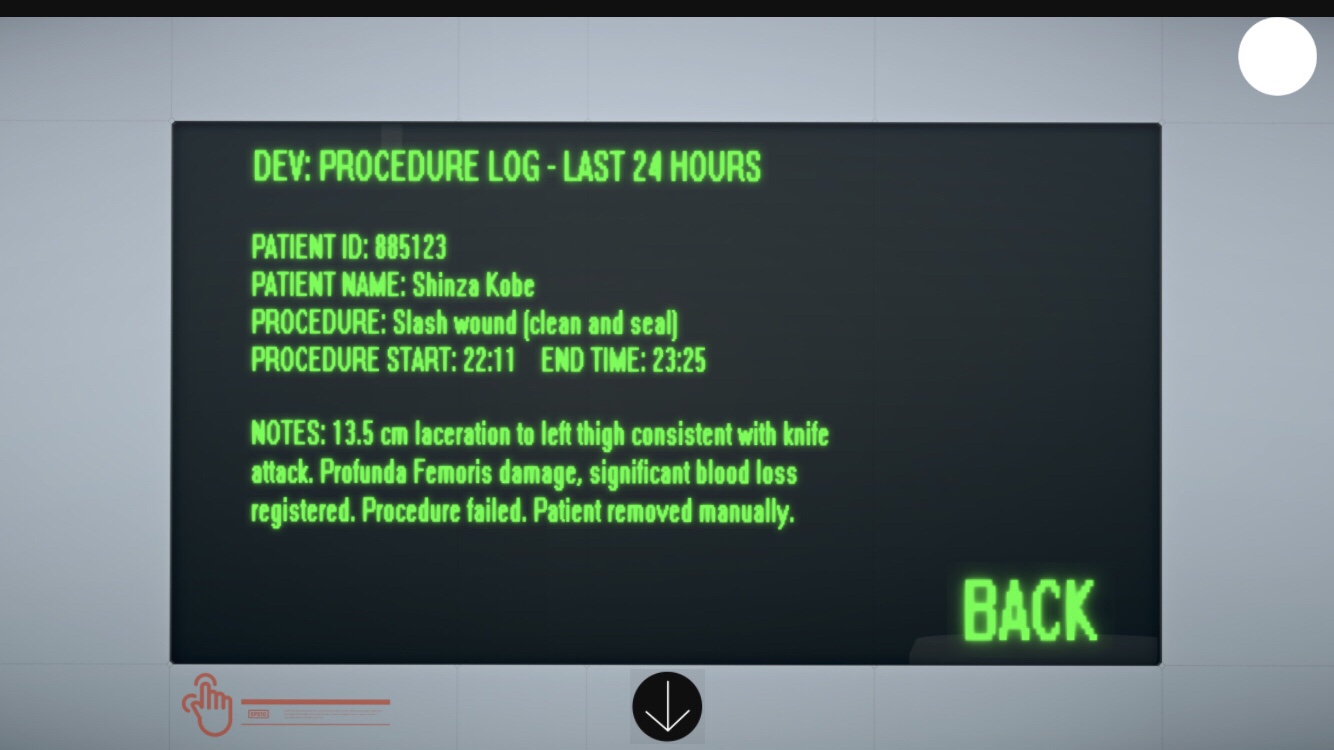 Back to some technical talk. True Legacy, as I wish all games would, utilizes iCloud sync so you can start on one device and continue on another. I was very happy playing on my iPhone, especially with all the turning, but if you’re someone who prefers playing on a big iPad at home, this gives you the freedom to jump between devices as needed. There were some bugs with saves in the pre-release version, but they seem to have been fixed. Most of the time, the game would remember the exact spot where I left off, though sometimes it would set me back a small bit to the last choice I made. It’s no big deal to catch up again, but is certainly more impressive when it opens up to exactly where you left it. 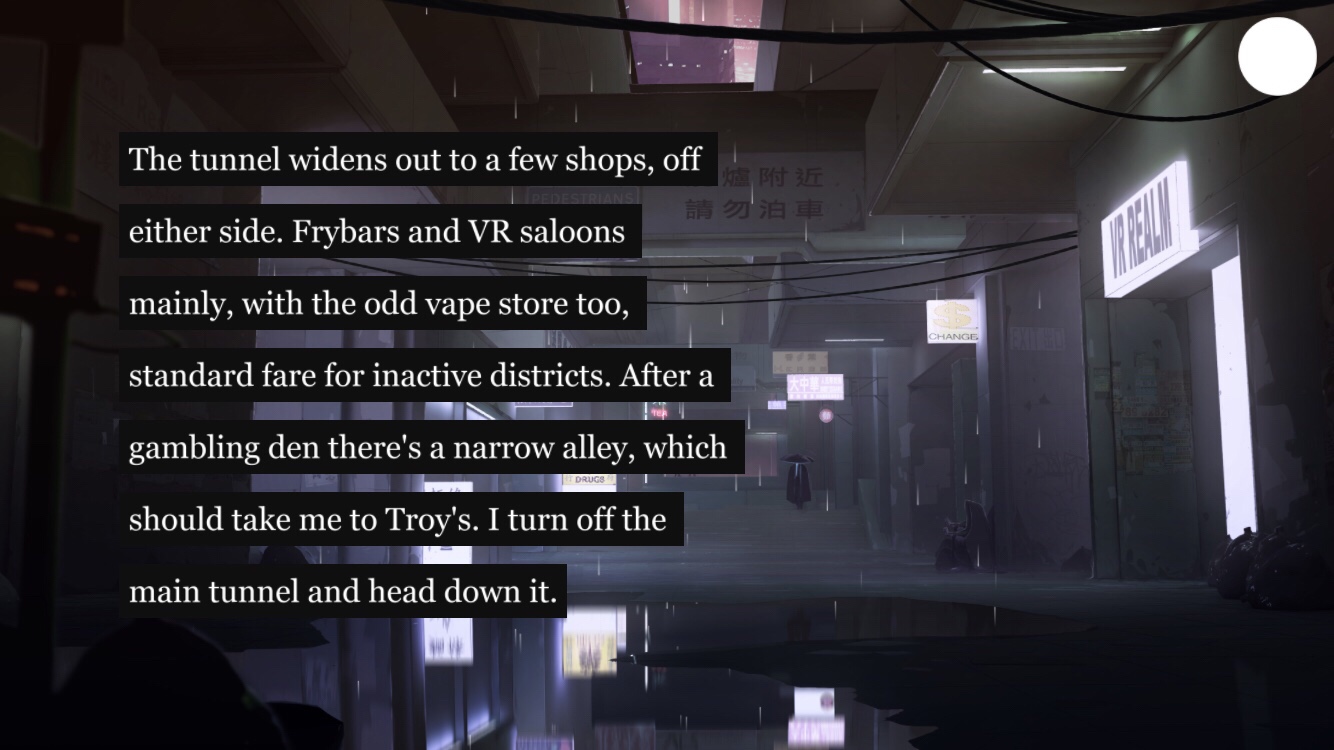 There are some small typos here and there like a missing space or a repeated word, but nothing too distracting. What did throw me off was weird moment in Chapter 3 where I had the option to take a detour in which I pulled out a newspaper clipping I had been carrying around for a while and had read before in a detour of a previous chapter. It was the exact same text, even the character’s response to it. It took me out of the moment and I’m not sure why it was there. But for the most part, the story is well-written with few inconsistencies.

Overall, my time with True Legacy was a great experience. Once I got pulled into the story, I couldn’t put it down. When my game broke ahead of release, I was worried I’d never be able to finish it and was genuinely bummed. When it was fixed, I rushed to catch up and continue the story. If you’re looking for a smart, stylish, content-rich dystopian text adventure with some difficult choices to make, you’ve come to the right place. Just give it time for all the new terms to fully register, as it can seem like a bit much at first. If you have to, reread sections until it all feels familiar. The game lets you do so until you get to the next chapter. I’m so glad I stuck with it to the end — both ends — as it will stay with me for quite some time. So what are you waiting for? Grab True Legacy here and become Detective Claire Thornhill. Or don’t. It’s your choice — or is it?