iOS developer TheCodingMonkeys started a series early last year called Monkey Box, focusing on innovative ideas. Their goal is to release small experimental games on mobile that offer unique experiences. The first one was called Polarized! and had you scanning objects in your environment with your device’s camera. I liked the idea of it, but it didn’t fire on all cylinders for me. I was still glad they were trying new things and looked forward to the next one. That brings us to Cards!, the second game in the series, and I only have nice things to say about it. This is exactly the kind of game I was hoping it would be and it was pure delight to play through.

Cards! is a mostly wordless choose-your-own adventure with a twist — the entire game is made up of cards. At each junction, you’re presented with three cards to pick from. You simply swipe left to right to cycle between them, making sure the one you want to select is in the middle. Then swipe up to play it and see what happens. You play as a Lara Croft-like explorer who’s following a mysterious cat through a strange fantastical world filled with all sorts of traps and other dangers. Pretty much anything is possible, so no solution is too crazy. 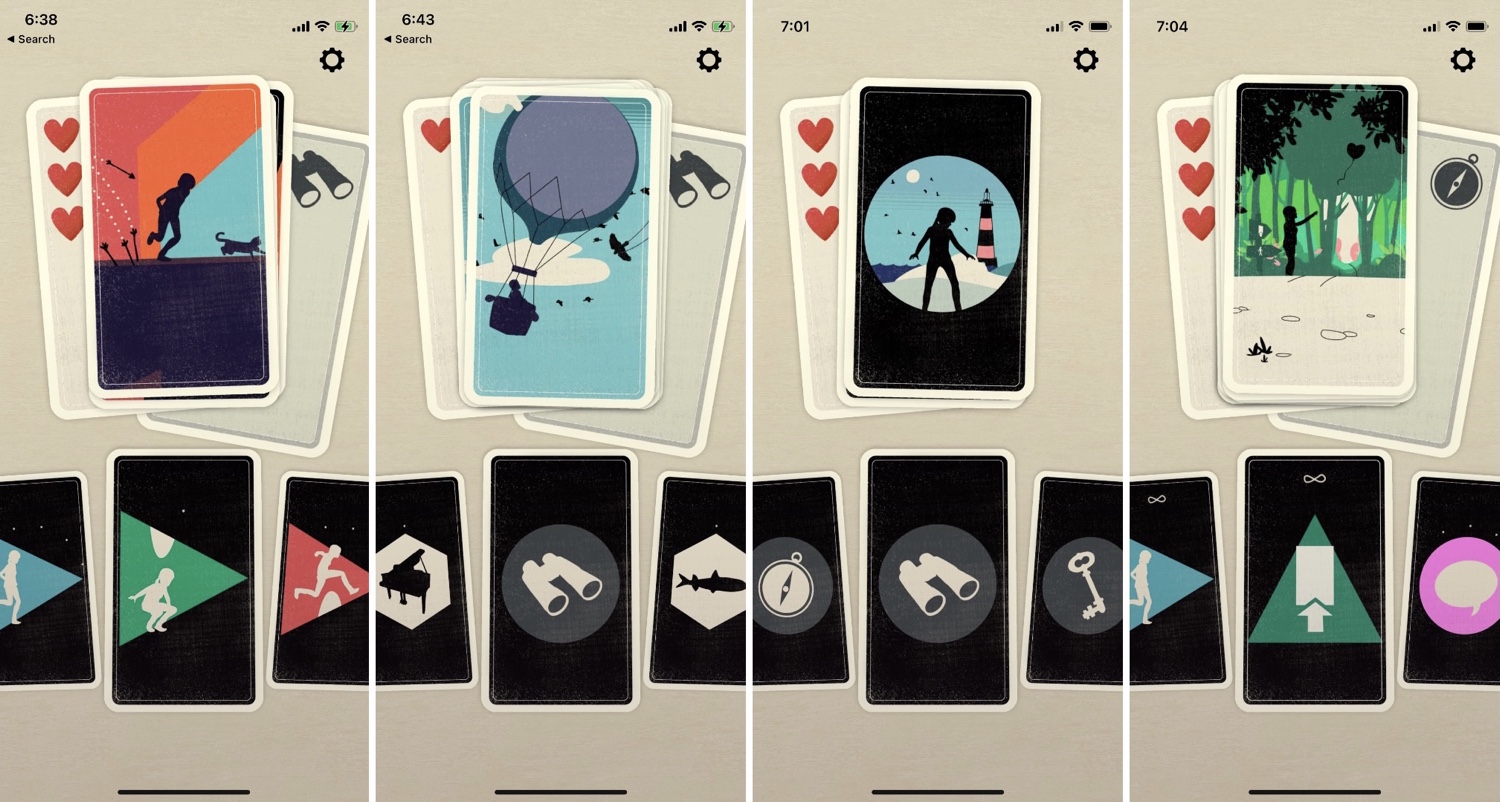 You need to use both your brain and sometimes trial-and-error to figure out each move. For instance, an early choice has you running with arrows flying overhead. You have three cards available, which are very clearly depicted as “run,” “jump,” and “duck.” If you duck, you avoid the arrows, but it also means you might not be able to duck at the next obstacle. Some cards have limited use — at least temporarily — while others have infinite uses. So it all comes down to choosing the right card at the right moment. That means there’s a hefty dose of trial and error in the game, but since failure is entertaining, as well, I didn’t mind that. It just adds to the playfulness. 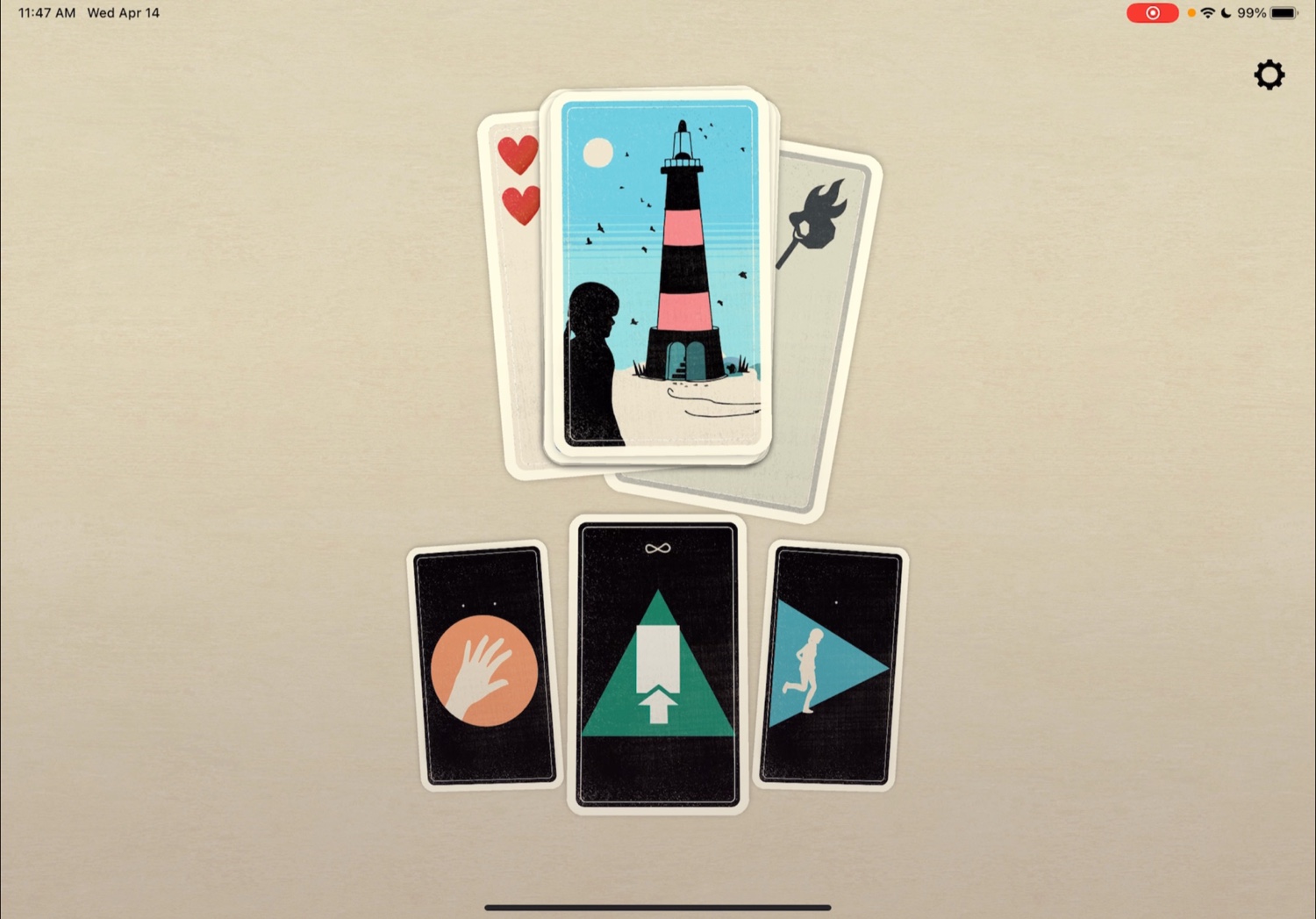 If you die, you can restart the chapter and choose another starting item. Some of them will be available automatically, while others must first be collected through play. For instance, one of my favorite chapters has a monkey about to throw a coconut at you. You have a banana on you and the most logical thing to do is throw it to him. But if you do so, you won’t have the banana when you’re hungry and you’ll lose health. So you then need to try a different object on the monkey, but again you might learn that you need it later. But restarting a chapter is super quick, and when you do get the correct sequence, the game will let you fast forward next time so you don’t have to go through it all again to catch up. The game also sometimes remembers things form previous attempts, so failure becomes part of the solution. You really just need to go with the flow and let the game take you where it takes you. Don’t think too much about why you might have a baby grand piano in your hot air balloon. 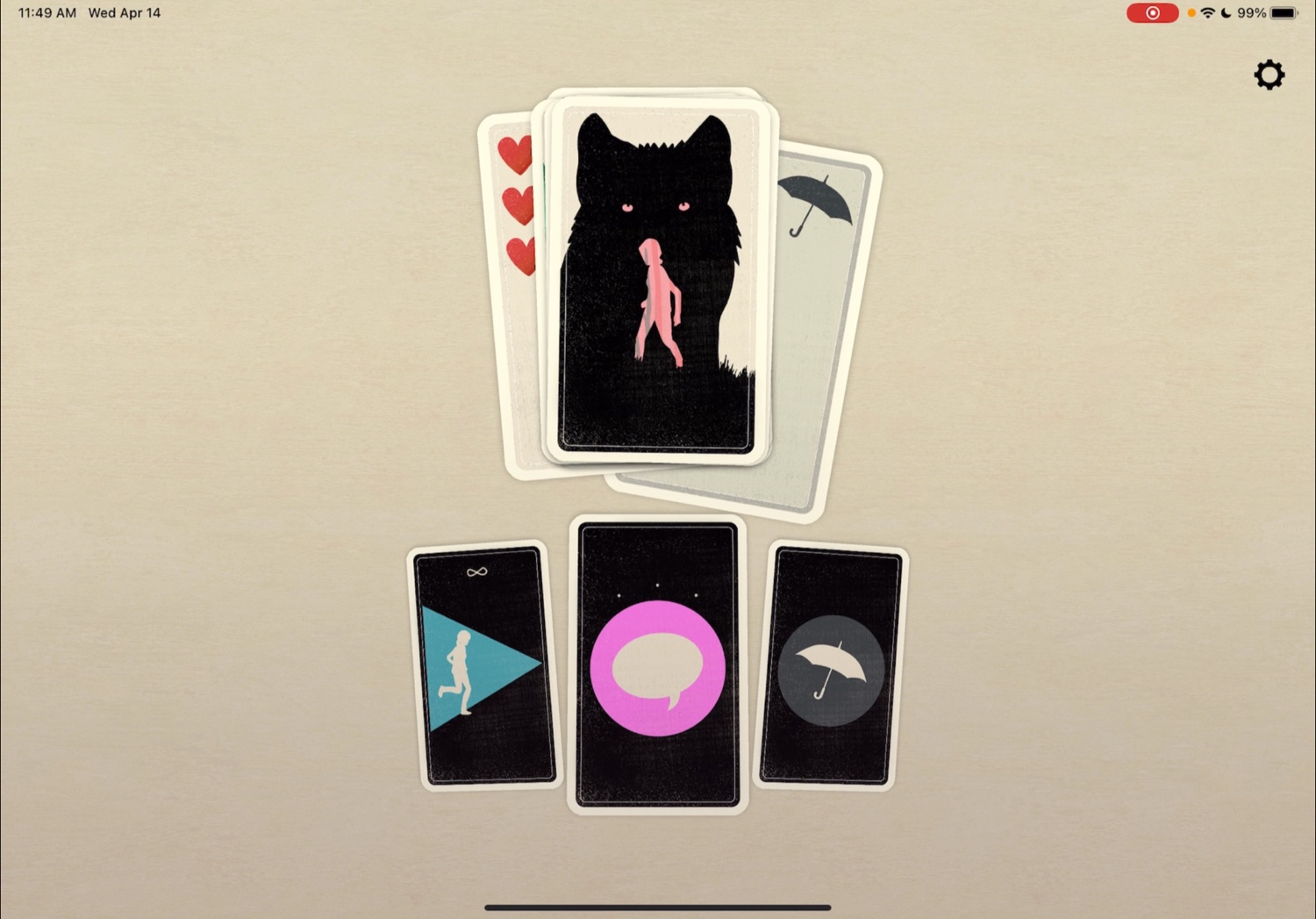 I also noticed that if you replay a previous chapter with a different item, you might find a different path that leads to the same place. You might also pick up new items that can be useful — though not critical — later. So there are sometimes multiple ways to get to the end of a chapter. That means there’s some replay value for those who aren’t satisfied with simply completing the game. Unfortunately, there aren’t any achievements, so it’s hard to tell if you’ve seen everything the game has to offer.

Cards! is exactly the kind of game I love to see on iOS. It’s perfect for touchscreens, since everything is turn-based and the controls are simple. It even plays in portrait on iPhone and either portrait or landscape on iPad. But there’s still a complex game under all the simplicity, with branching paths and Easter eggs to discover. And it’s all wrapped up in a super slick art style. Even though the game is short and can be completed in less than an hour, I thoroughly enjoyed every minute with it. You can also go back and replay any chapter at will, so there’s plenty of room to experiment even after you reach the end. I wholeheartedly recommend Cards! to anyone who likes playful experimental games. If you’re still not sure, though, there’s a playable teaser here that’s even enjoyable if you already played the full game. Then, when you’re ready to take the plunge, grab the game here and see where the cat will lead you.

If you need help, try my walkthrough guide.