I’m not the biggest fan of pixel art, and I almost ignored Arif Games’ Dark Fear because of its art. That would have been a huge mistake, as there’s a really solid, enjoyable game here. I think in this case the pixel art works really well to capture that old school, retro feeling, as well as some uneasiness invoked by the dreadful atmosphere of the game. It’s probably why I jumped and cursed at an early jump scare, even though I had a very strong suspicion that something was about to happen.

Dark Fear is a classic point-and-click puzzle adventure with RPG elements such as battles and gear upgrades. You wake up in a dark cabin with no idea who or where you are. So you set out on a quest to learn what you can. You need to find objects and clues and use them to progress through the story. But often a big hairy monster stands in your way of accessing an object, so you’ll have to fight them. Then the townspeople thank you for making it safer to get to and from the village and offer you their services for a price. That’s where the RPG elements come in. As you progress through the story, the shops will offer you new gear so you can handle the stronger monsters you encounter. 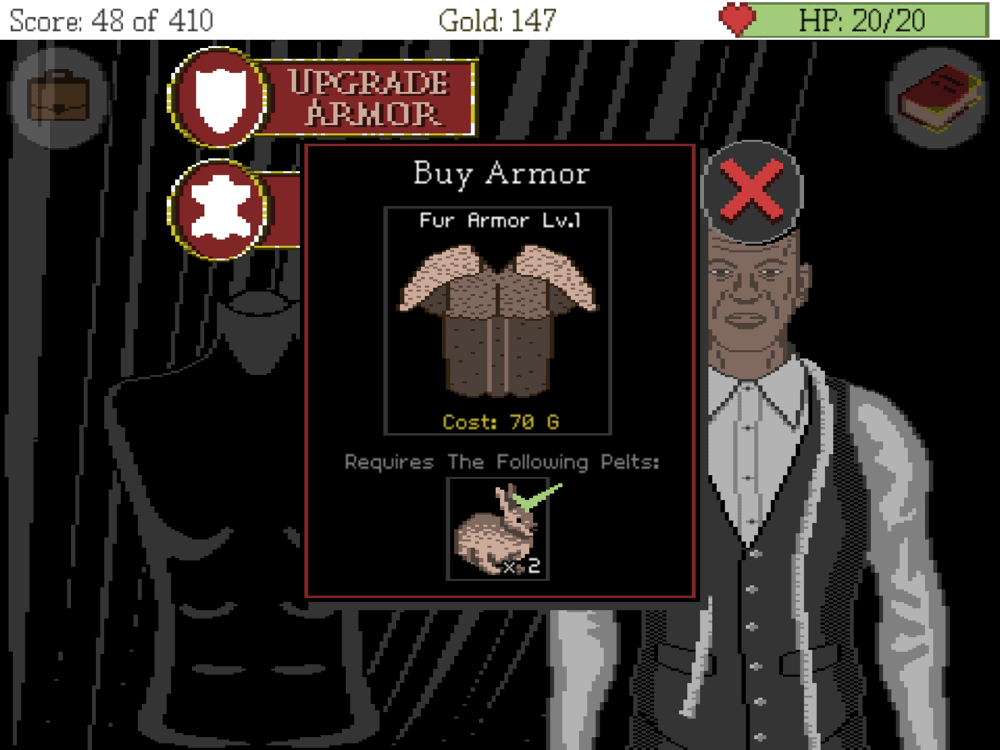 The story also unravels in the same way, bit by bit. If you talk to someone and they tell you about a location you should visit, that place will appear on the map with a question mark. The first time you visit a new location, it takes a few seconds and anything can happen. You can be attacked by a pack of angry wolves or a big black bear. In those situations, you won’t be able to explore that location until you defeat your attackers. Once you’ve done so, you can visit that location whenever you want. Traveling around the map this way is quick and easy, making exploration enjoyable. 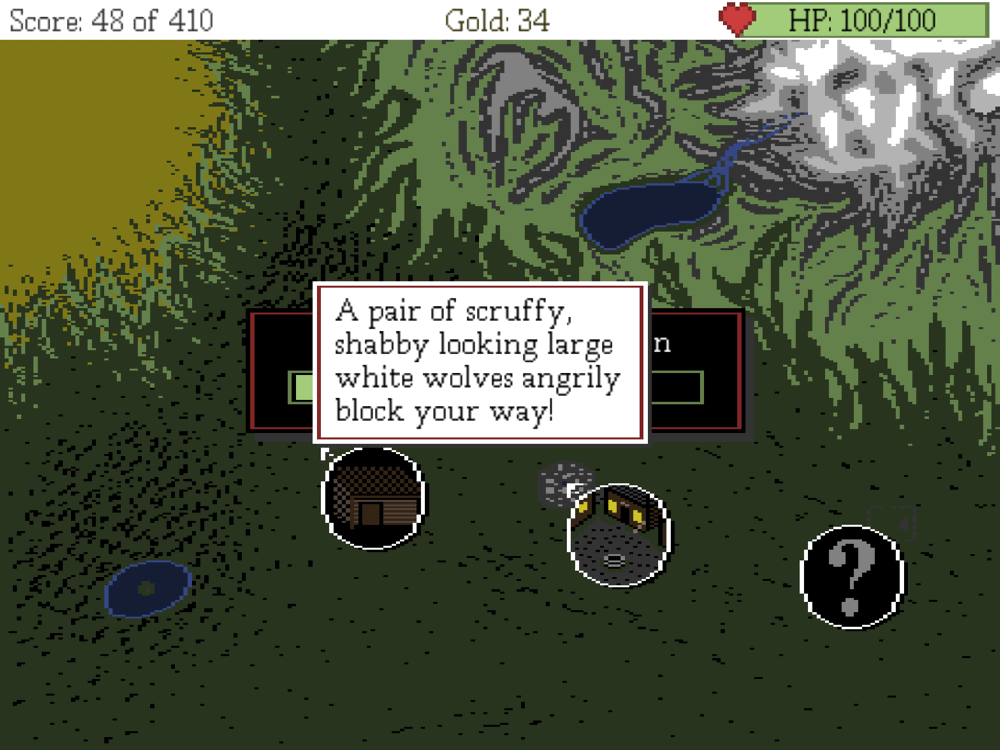 As far as the puzzles are concerned, most things are logical, but there were a couple of points where I was frustrated. For instance, I needed to break a glass bottle against something and I wish it wasn’t so specific about where that has to be done. Allowing various locations to work for that would have felt more realistic. Also, a couple of items blended too well into the background. I completely missed one and had to ask the developer about it because it was hidden so well. I’m not a big hidden object fan, so I could have done without that little frustrating bit.

Let me explain how the battles work in this game. First you start of with melee weapons like an axe or sword. Later on, you get a crossbow for which you can buy different kinds of bolts. Some enemies have weaknesses to certain materials, so each bolt type comes into play at some point. When an enemy appears, you always have the first move. You can choose from options such as attack, defend, use a potion, or flee. If you flee, you’ll lose anything you used or earned in the battle and you’ll have to start over next time you return. There’s no way to get out of a battle permanently. Attacking is what you’ll be doing most of the time. When you do, a little bar will appear with a quickly moving arrow. You need to try to tap the screen when the arrow meets the green part of the bar in very center. If you succeed, you’ll cause 100% damage to your foe. If you’re slightly off center, you’ll only do 75% damage. The farther you get from center, the less damage you’ll do. The less damage you do, the longer the battle takes and the more damage your enemy can deal out. So you obviously want to do your best to hit that center. 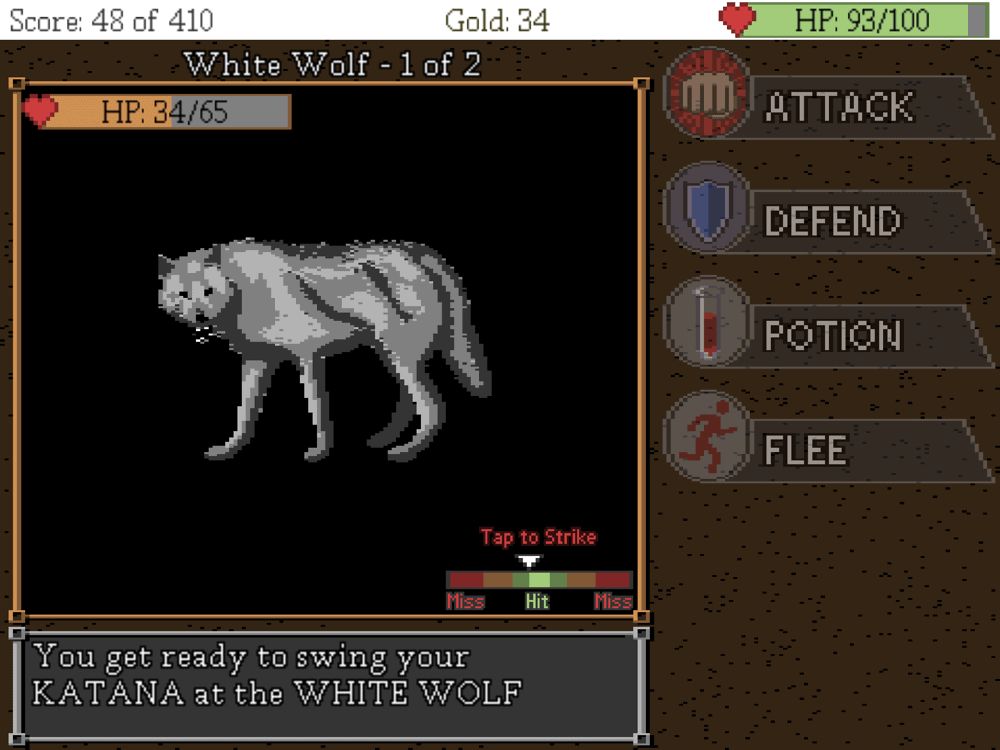 Usually the game will tell you in some way what an enemy’s special power and/or weakness is. But there are some tough battles where you’re not given that information, so you have to try out different bolts to see what’s effective. Whether this is a positive or negative aspect of the game will depend on each player’s own preferences. I have mixed feelings about it because it made the game a bit more challenging, but it’s also annoying to have to keep starting the same battle over just because you don’t know what to take with you. 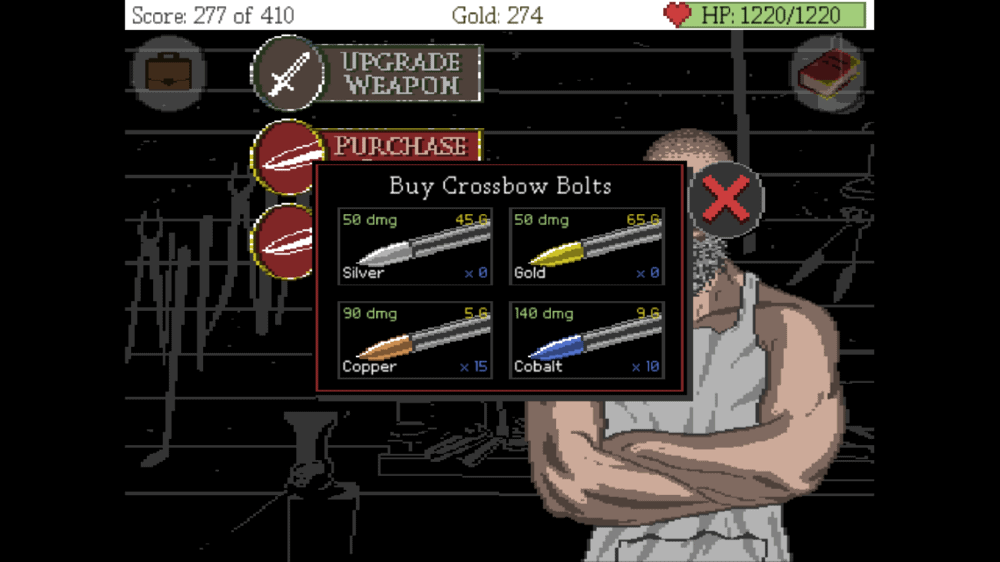 You never know when you’ll encounter a battle, but death isn’t very final in this game. If you do die, you’ll just wake up in the cabin again. You might lose some points from your score, but you’ll still be able to get through the story. The game also allows you to save just about anywhere, and there are three manual save slots along with the autosave feature. I basically played Dark Fear the way I used to play old PC games like Might & Magic back in the day — save, take a risk, die, reload save. 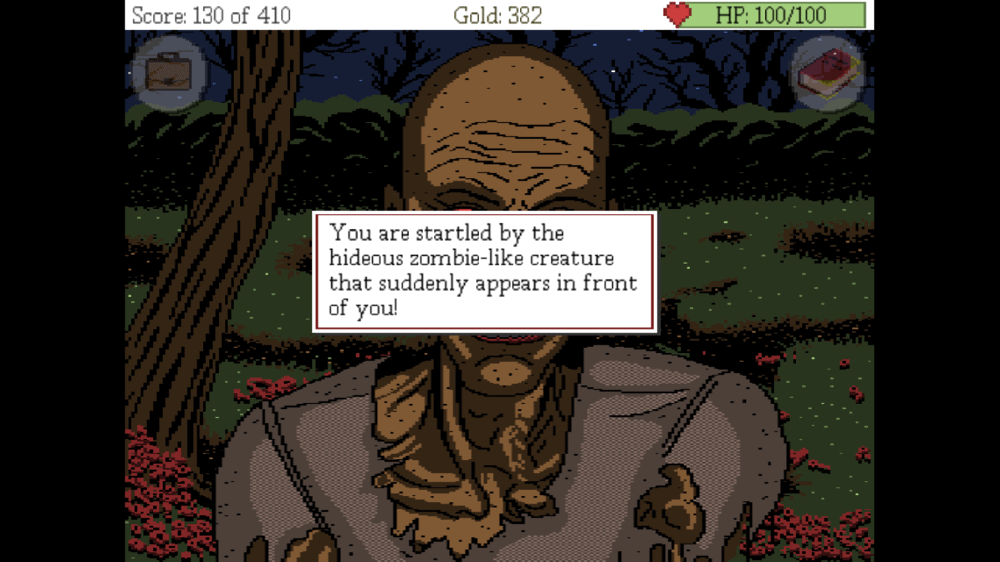 The game also gives you so many ways to make things easier so you can get though the storyline, even if the battles don’t go so well. You can hunt and fish to earn as much gold as you want, which can then be used to buy more bolts and potions just in case your battles take too long. 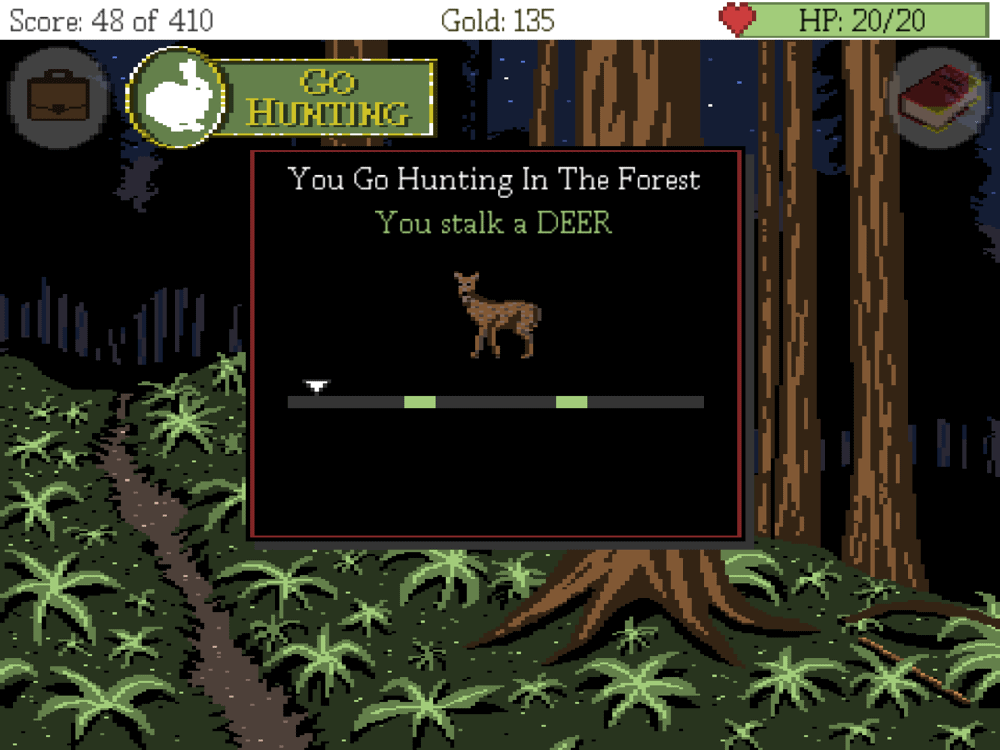 One of the things I really like about the game is how much effort went into providing text descriptions for everything. Every item in your inventory has a description, even if it’s just a box of matches. Tapping on anything in your environment usually brings up a description, as well. There’s also quite a bit of dialogue, but it all feels necessary and never forced. The dialogue also often gives clues as to how to solve a puzzle or how to defeat a certain monster, so it’s important to pay attention. The ending is a bit weird, though, and might not sit well with some folks. But I can’t really say much about it without spoiling things. 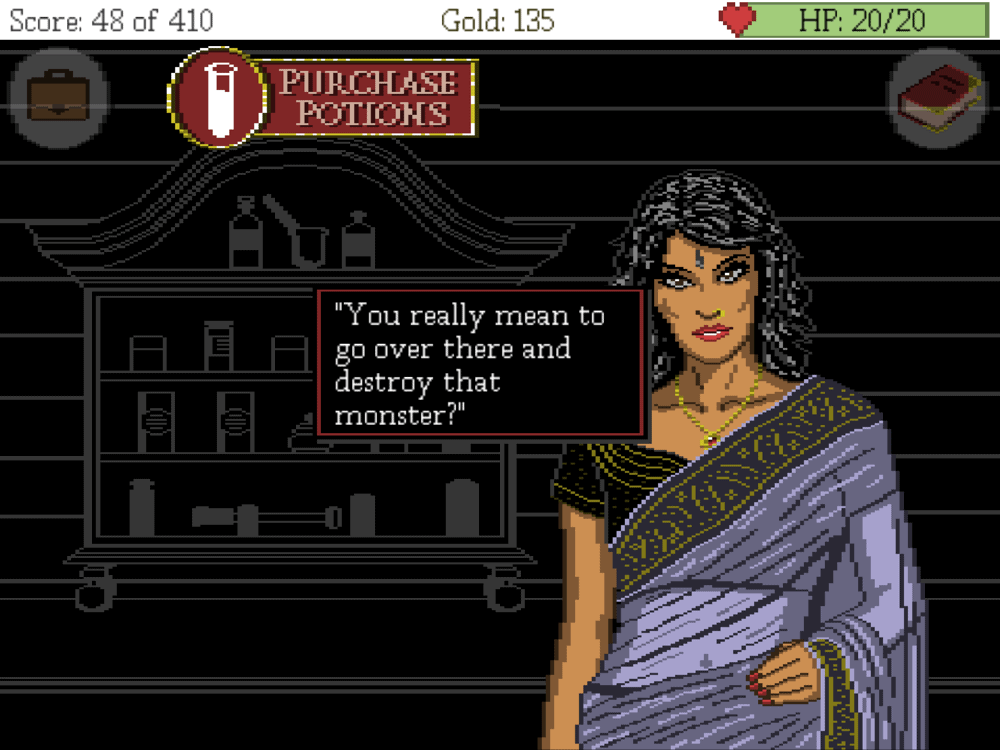 I should also mention that the game has a really strong soundtrack. It’s tense when you’re in danger, calm and serene when all threats have been cleared out of an area. Occasionally it will be relaxing when there’s still danger lurking, making you more susceptible to the jump scares. Overall, I was really impressed with it. I recommend playing with the volume up. 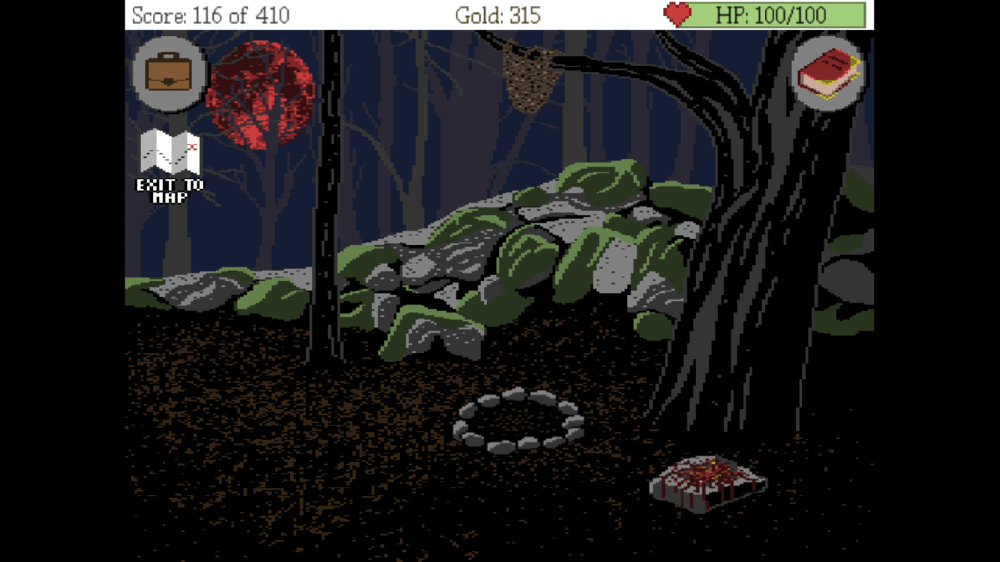 While the game is close to perfect, there are a few minor issues I should mention. I played mostly on my iPhone because I felt I had more precision during the battles with my device grasped in my hand instead of resting in my lap. I also wanted to be able to take the game with me and there’s no iCloud saves to sync devices. For the point-and-click parts of the game, I thought the iPad was great. But it felt a little clunky for the battles. The only problem with playing on an iPhone is that the game isn’t optimized for them, so the screen doesn’t stretch to the edges. Therefore, you need to be careful that you don’t tap the empty space when you’re attacking or hunting.

Also, the screen is locked in one orientation, with the home button to the right. This was only a mild nuisance, but it became more problematic when I needed to plug my device in. Having the cable on the right side got in the way of my right hand trying to battle the monsters. So I would often just take my breaks when I had to charge, instead of playing while plugged in like I would with most other games. 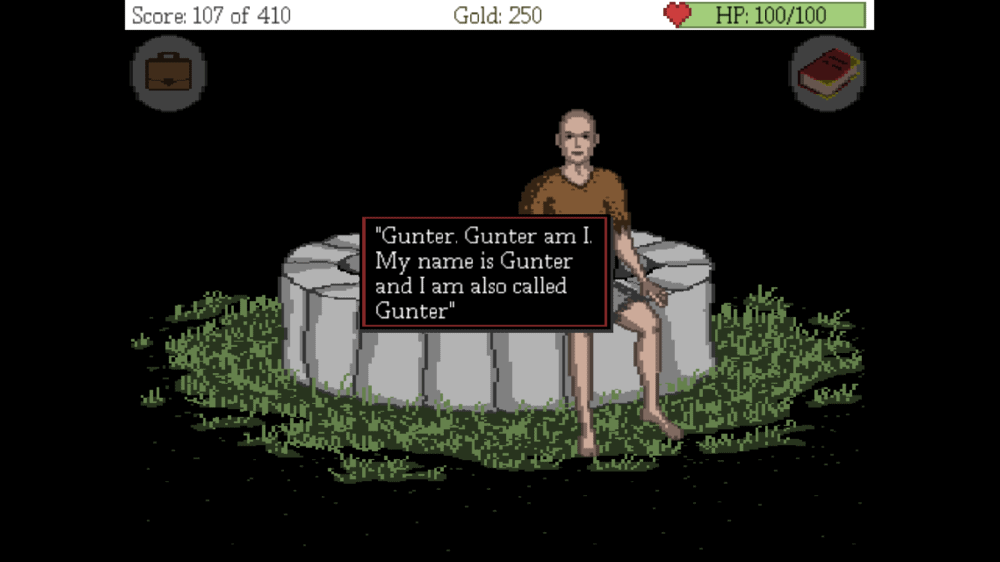 Also, if you do play the game on-the-go and need to mute it, keep in mind that it currently ignores your device’s mute setting and you need to lower your volume to silence it. But the developer is aware of this and hopefully fixing it. I recommend you play with the sound on as much as possible, anyway.

And finally, there are achievements, but only in-game. I wish there were GameCenter achievements so I could compare with others. It’s hard to take them seriously when no one else will see them.

Despite these minor issues, Dark Fear is a solid game that hits all the right marks for me. All the elements blend well together and I was interested in seeing where the story went. But if you don’t enjoy the battling parts of the game, you might get annoyed at how frequently they occur. They did cause me to take more breaks than I would have if the game had been a straight point-and-click. But there are enough puzzle adventures out there, that I’m glad Arif Games decided to do something a bit different and more daring. And the game offers plenty of ways for even the most casual player to get through it. If you’re looking for a game that’s not just another rehash of others, give Dark Fear a download here. But you might not want to play right before bedtime.

If you want to see the game in action, I took some footage of the first fifteen minutes here:

If you’re playing the game and need any help, I wrote a very detailed step-by-step walkthrough here.

Apple Arcade Finally Has a Price, Launch Date and Some Amazing Games Announced