As many of you might know, I was a bit obsessed with Snakebird recently. I loved its hardcore puzzles that combined trial-and-error with strategy. I didn’t know that much about Twisted Lines when I decided to buy it, but I was curious enough to check it out. While it does hold your hand a bit more than Snakebird does, it has quite a few tricky puzzles that had me trying so many different routes before I figured out the solution. Like Snakebird, it has a simple concept that’s used ingeniously to create devious puzzles.

But Twisted Lines is very different from Snakebird — or any game I’ve played, for that matter. It’s one that was designed specifically for touch screens, although I can easily see it working with a mouse on a PC. I found it a little bit weird at first, but once I got used to it I was in love. How it works is you start with a colored square. You drag this square around the board and its tail forms two colored lines. When the square crosses the lines, it swaps colors with the one it touches first. It’s a bit hard to explain, but once you get the hang of it it becomes second nature to make loops and crosses, trying to find the perfect pattern that will hit all the colored squares on the board. If you’re not careful, you’ll tie the line into knots and have to backtrack. But there are no timers or move counters, so it’s a great relaxing, stress-free game that can be played anywhere. You can see the game in action in my video of the first chapter:

There are nine chapters of twelve levels each, with a new theme and mechanic in each chapter. For instance, the second chapter introduces portals. You push the square through one portal and then pull it through any other one on the board. Since there’s so much freedom with the portals, the solution is usually not so straightforward. However, the game often likes to end with a symmetrical design, so if you’re stumped that’s a good place to start. 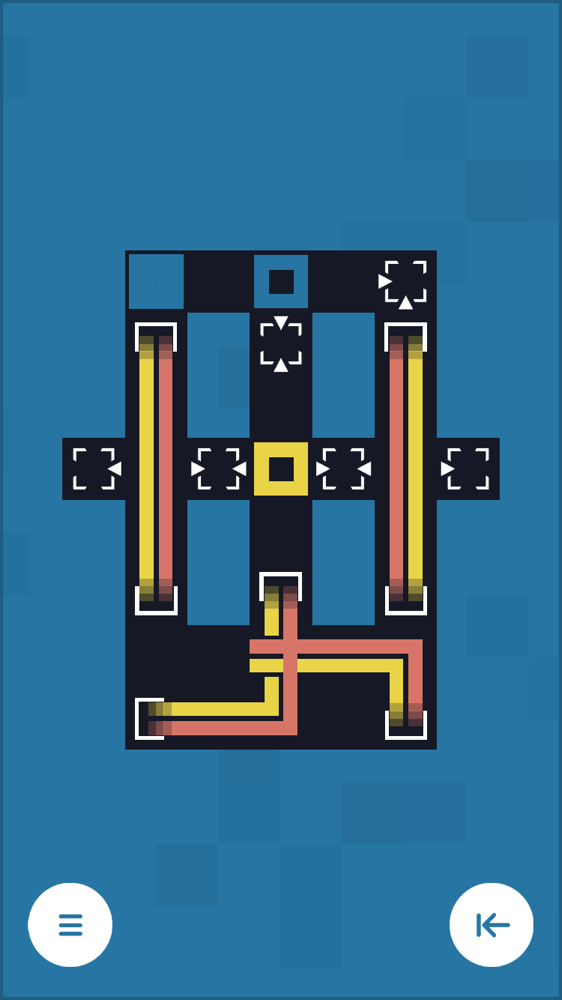 Later on, new mechanics are added, such as an eraser that clears the entire line up to that point. Or these sort of walls that can only be cleared by a square of the same color. Since each chapter has its own theme, it never gets too overwhelming, even when you feel like you’ve tried every possible solution. Usually it means you’re just overthinking it and need to look at it with a fresh mind. 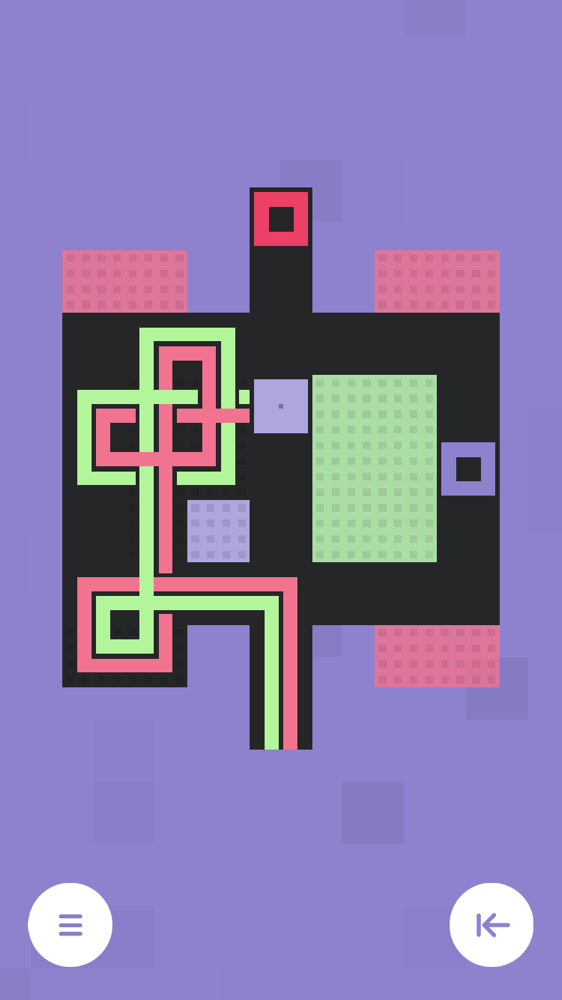 Each chapter also has its own narrative and soundtrack to go along with it. When you solve a puzzle, it reveals the name, and when you complete a chapter, you unlock the chapter’s name. One of my favorites is “New Love,” which involves two separate lines that often intersect. The level names tell a story about a relationship, but in a mature, intelligent way. So many iOS games are geared at kids these days, that it’s refreshing when one comes along that feels intended for adults, even though it can easily be enjoyed by kids as well. The music also changes according to the paths you make and varies enough from chapter to chapter so it never wears out its welcome. 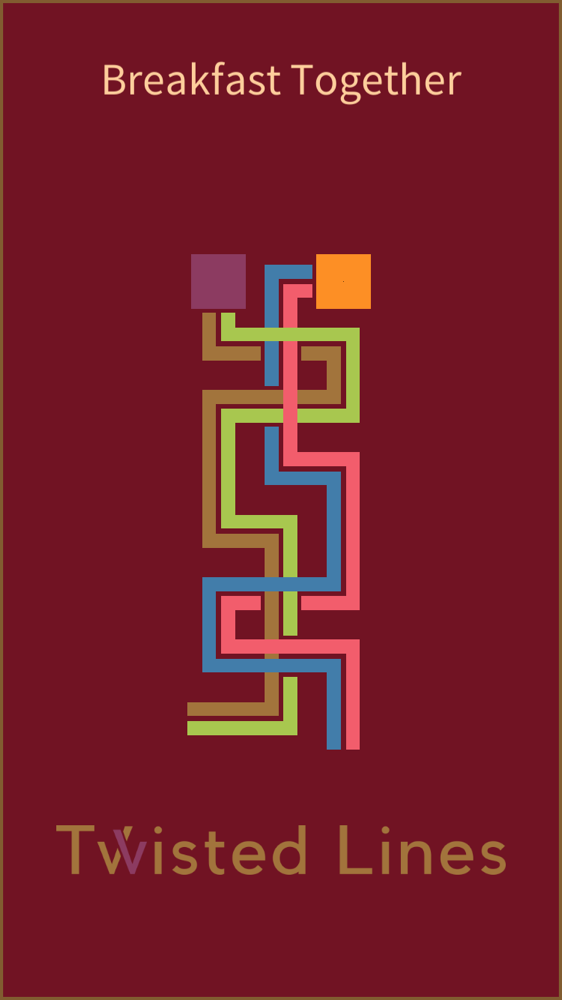 Overall, I found the game immensely satisfying. I didn’t even mind the easier puzzles that were meant to introduce the different mechanics. There were enough puzzles that stumped me to keep me from breezing through the game. And even those that are a bit easier have a clever design, so nothing truly ever feels like filler. You can just see that the developer wanted a certain design in there, even if it didn’t offer the biggest challenge. I also appreciate that they didn’t name the game Twisty Lines, as that would have cheapened the experience. It’s clear from the names of the chapters and levels, as well as the patterns some puzzles create, that a lot of love went into making this game. 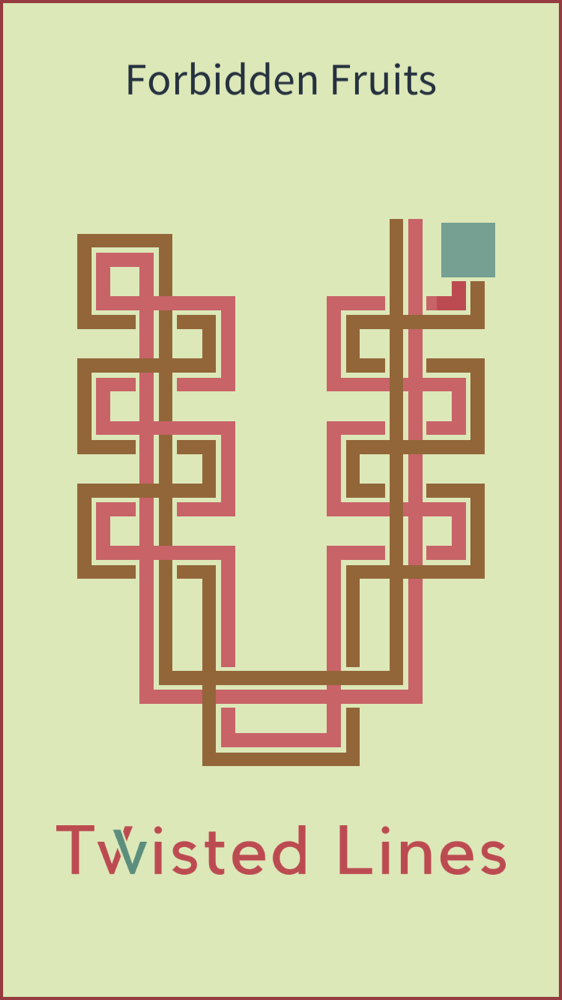 I do have a few minor complaints about Twisted Lines. I was a little annoyed at first that the game uses keys to unlock new chapters. It felt a bit forced and unnecessary. Considering how stylish and minimalistic the game is, I was surprised they didn’t just have chapters unlock automatically and do away with that extra clutter. The game also sometimes froze up when I tried to unlock a chapter, but rebooting the app always fixed it. In any case, it’s just a small distraction that didn’t take much away from the experience. I also would have liked the option to skip a level. Sometimes I just needed a break from one so I could come back to it with a fresh eye. But the game doesn’t allow you to skip. The best you can do is unlock another chapter if you have enough keys, so you can work on two different levels at a time. While not as preferable as skipping a level, it did offer me some variety when I was stuck. 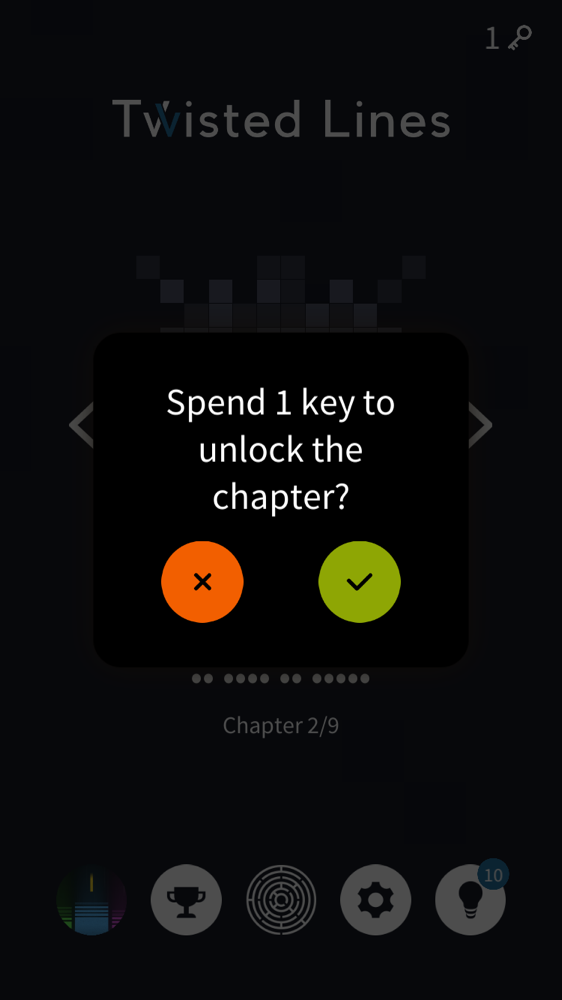 The in-app purchases (IAP) for hints are also not ideal, but the game never once pressured me to use one. In fact, the hints aren’t even accessed from the main puzzle screen. You have to pause to get a hint from a separate menu, making it less likely you’ll use one. If a game has to include hints for a price, this is the absolute best way to do it. It’s out of the way, just there for those who are really desperate. I’ve deleted games that didn’t just let me solve the puzzles at my own speed without trying to offer help. So that was a really big deal for me. Also, one of the IAPs offers unlimited hints, so if you’re someone who likes to use them frequently, it won’t nickel-and-dime you. And there are ten free hints included for those who just want to use one occasionally. I completed the game without using any hints, so it is doable with enough patience and determination. 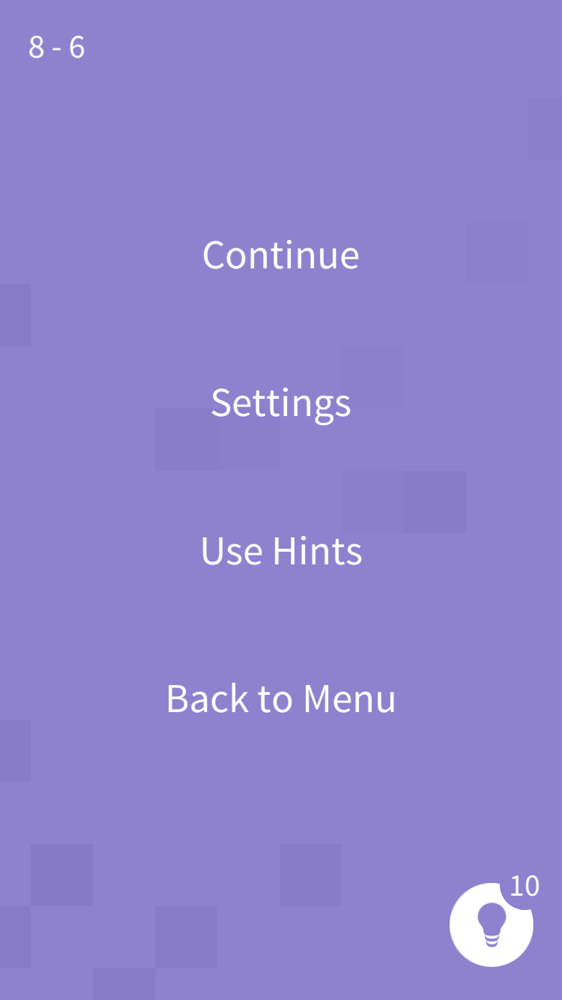 The inclusion of the undo button is also a huge huge plus for me. I’ve said this in other reviews, but it makes a big difference, especially on a touch screen where it’s so easy to miss-swipe or mis-tap. Without that ability, I’m not sure I would have stuck with the game to the end, as it would have been much more frustrating. There’s also some flexibility in how you undo your moves. You can retrace your steps to erase them. Or, you can tap on the undo button to undo one move at a time. But if you need to go back much further, just hold down the undo button for longer. To restart the level, just keep your finger on it until it rewinds completely. That last aspect was easy to miss at first, but once I noticed it I liked it as a clutter-free option. Instead of two buttons on the screen, only one is needed. It helps the game keep to its minimalistic design. 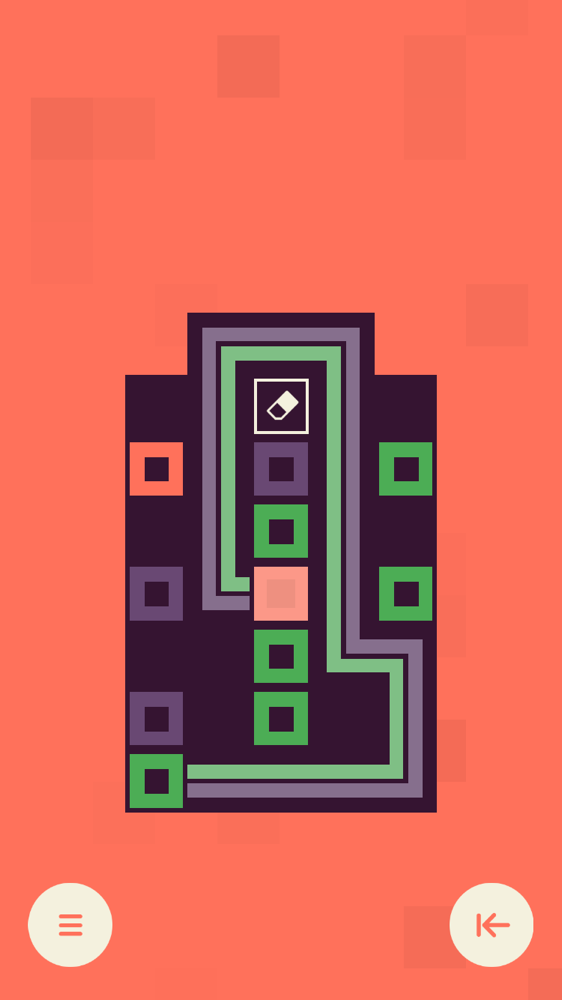 If you’re looking for a unique puzzle game that won’t hold your hand too much and will make you use your brain, I can’t recommend Twisted Lines strongly enough. It’s made specifically for a touch screen, and its one-handed relaxed design makes it a perfect fit to play anywhere on your iPhone. I don’t even mind that it doesn’t have iCloud sync because I never felt the need to play on a bigger screen. If you’re a puzzle fan, you absolutely owe it to yourself to play Twisted Lines. So stop reading and download the game here.