When I got my first iPhone, it felt like magic. It still kind of does, but now it’s magic I’ve gotten used to, that is part of my daily life. I don’t often stop and ponder anymore how incredible it is that thing is able to translate my taps and swipes into very specific commands. In the same vein, most iOS games that suck me in these days feel great on the platform but don’t make me contemplate their very existence. It’s rare for a game to bring back that same magic and wonder as when I first used a touchscreen. RAC7 Games’ Splitter Critters is one of those special games, where not only is it a perfect fit for touchscreens, but it has me wondering “how the hell did they pull that off?” The idea seems simple enough, but when you play around with it and realize just how polished the mechanic is, it feels like magic. 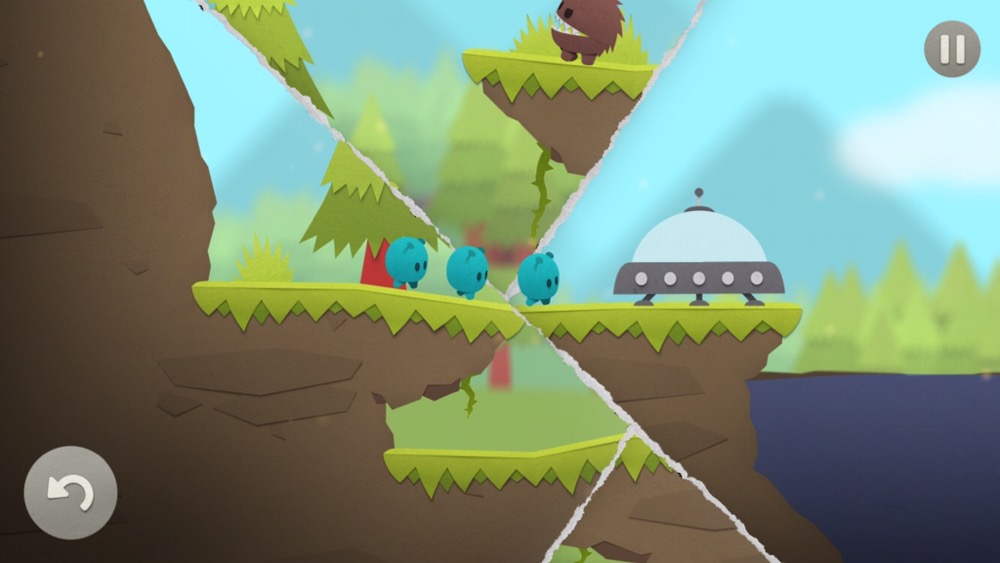 So what makes it so special? At its core, Splitter Critters is a puzzler broken into forty-odd levels, each with the goal to lead the auto-running alien creatures to the spaceship so they can fly off to their mothership. The catch is that there’s always some obstacle preventing them from getting there and you’re not able to interact with them directly. Instead, you manipulate the environment by slicing it with your finger and shifting it so two separate platforms, for instance, can now become one. To make sure your cut is exactly how you want it, you can adjust the angle while your finger is still on the screen. You use this simple mechanic to create safe passage for the critters to walk to the ship. The other tool in your toolbox is the “undo” button, which behaves a bit differently than in most puzzle games. It’s used less to fix your mistakes and more as a mechanic. It’s hard to explain, but it will undo a slice while leaving the critter where it is. This keeps things cleaner, so you don’t have to keep slicing on the same spot to slide the two halves up and down, up and down. There’s also a limit to how many slices can be in effect at one time, so the undo button becomes necessary for many puzzles. I was surprised by it when I first realized how it works, but it fits in beautifully with the rest of the game. You can see the game in action in my video below.

The game reminded me of Acid Nerve’s Telepaint, which also has an auto-running character that needs to reach a goal. In Telepaint you use portals to make it happen, and I loved that game. But slicing the whole environment into pieces takes the concept to an entirely new level. It’s fun to find alternative solutions to a puzzle after you complete the game, or even just mess around to see what kind of crazy stuff you can do. The game cuts out any nonsense and just lets you play, with nothing between you and the puzzles — just how I like it. The user interface is super sleek, with nothing on the screen but the “undo” and pause buttons. That allows the game to feel spacious, letting you slice and dice freely, without worrying about accidentally pressing something. And iCloud sync allows you to play on either your iPad or iPhone without having to catch up on the other. The game feels great on both, but I appreciate the extra effort, because I much prefer playing on my nice big iPad when I’m home. 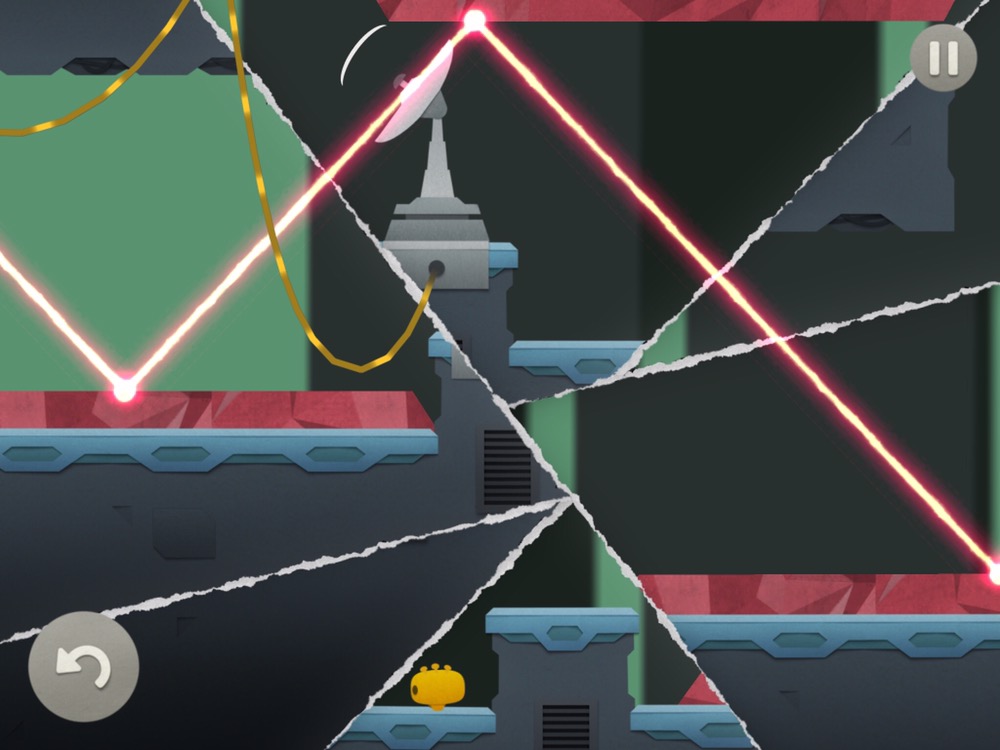 To keep things interesting, there are three types of aliens with different behavioral patterns. The blue one walks to an edge of a platform and turns around, pacing back and forth until you give him a way to cross. Yellow aliens are pretty dumb, as they walk until they hit a wall, even if that means taking a swim in hot lava. They just look straight ahead, ignoring what’s below them. And last, the red monsters behave the same way as the blue ones, but they can kill monsters to clear a path for the other aliens. You need to take into account each alien’s behavior before you plan out a path for it, or you could accidentally end up with a yellow critter jumping off a cliff to his doom. You’re only forced to restart a level if an alien dies, so as long as you’re careful, you can take as much time as you need. There are no timers or move counts, so despite some tricky platforming bits, it’s a very relaxed game. 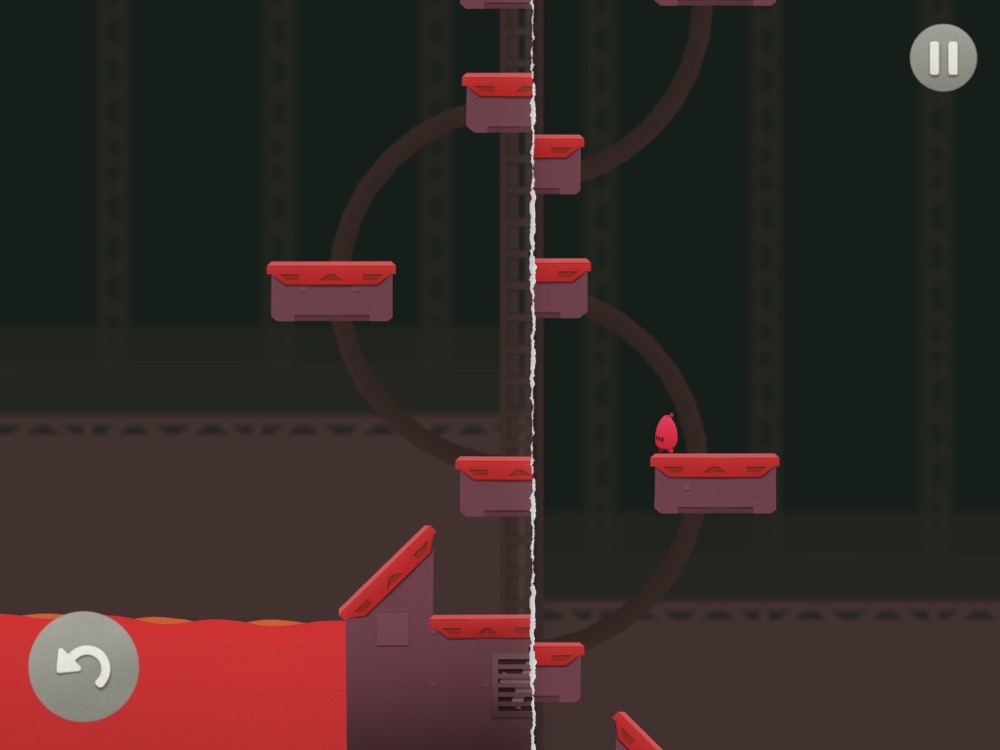 Your journey will take you through five unique planets and a bonus moon. Each planet focuses on different mechanics. For instance, there’s the water planet, where aliens can take shortcuts by swimming upwards. You can also slice off a chunk of water and lift it above a platform so they can drop down onto it. If you’re not careful, though, they could swim into spikes and end up dead. Later, you’ll encounter moving platforms, lava, buttons, and even mirror and laser puzzles. I have a soft spot for laser puzzles, so those were some of my favorites. I personally prefer the levels that rely more on finding a clever solution than on quick reflexes and I hope to see more of those in the future. While I’m sure some will favor the lava levels, they were more stressful than I’d like. For me, the game truly shines when it asks you to think creatively. But even the levels that require fast reflexes are pretty doable, as they’re relatively short. You won’t have a half hour of platforming to redo if a critter dies. Even I, a confessed hater of platformers, was able to complete everything without too much trouble. In fact, some levels were maybe too easy for their location in the game, leading the game to feel a bit on the shorter side. I also wish some mechanics had been utilized more — like the monsters — but the developers have told me they have lots of other ideas up their sleeves and plan to add more planets in future updates. They even submitted an update already that will give hardcore players a few more bonus levels to sink their teeth into. (UPDATE, 2/4/2017: As promised, the developers added over ten new puzzles, each of them unique that adds something new to the game. If you felt the original content was too easy, the new stuff should give you more of a challenge. They also changed the camera so the player has full control of it, instead of automatically zooming back in or following the aliens. This makes the bigger levels that span more than one screen easier to handle, and it was a much welcome update for me.) 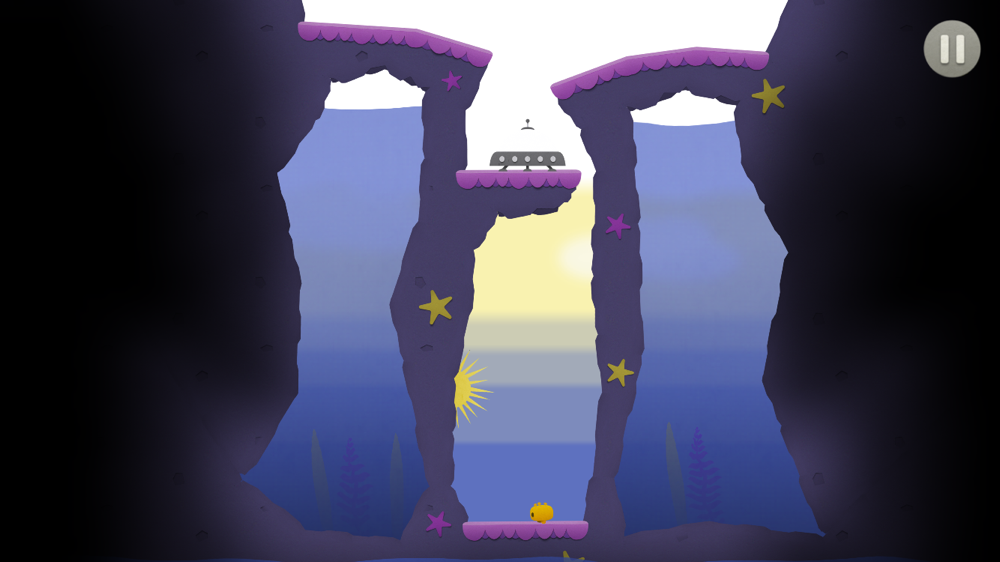 Overall, I thoroughly enjoyed my experience with Splitter Critters. From the puzzles to the charming paper craft artwork to the sound effects and music, everything about the game is nearly flawless. I have no idea how they made it all work so well, but I’m thrilled this game exists and in such a polished form . I did encounter the occasional weird behavior from some critters, but they were rare and each level is small enough that restarting shouldn’t be a big deal if it causes a critter to die. Some might complain that it’s not long enough, and I, too, was sad when it was over. But a truly unique game like this only comes around once in a while, and you’d only be punishing yourself by not playing it. For $2.99, you’re getting a magical and clever game that will last you a few hours. Not every level is clever enough to make you scratch your head, but there’s enough solid content here to make it an easy recommendation. It also has a ton of potential and the developers are very communicative and sound invested in the game. If you’re a puzzle fan but feel like everything’s been done already and the magic’s gone from mobile games, you owe it to yourself to play Splitter Critters and bring that magic back. So go grab the game here and start slicing!

If you’re already playing and you get stuck, try my walkthrough guide.