Over the last few years, puzzle games have become one of my favorite genres to play on my iPhone. There’s no shortage of truly wonderful puzzlers on iOS, and they’re usually a great fit for the platform. But with so many releasing every day, it’s easy to become skeptical whether any individual game will offer anything truly new or unique and feel worthy of my time. How many Sokoban or path-drawing games can you play before they get old and feel like you’ve done this already a million times? Therefore, I was a bit skeptical about Grzegorz Pykacz’s follow.trail, not least because it doesn’t appear all that special from screenshots. I didn’t realize until I was a few levels in just how unique it is.

At first, the game seems maybe too straightforward. The very basic tutorial shows you that you control the little blue square. You swipe anywhere on the screen to move it around the board, one box at a time. The idea is to follow the trail of tiles (hence the name) to the exit. When you land on a tile it’s cleared from the board, unless it has a value higher than 1. The board needs to be free of all other tiles before you can land on the exit and complete the level. You learn what each tile does mostly through trial and error. For instance, a white numbered tile will count down one number at a time whenever you land on it, all the way to zero, where it disappears completely. But if you land on an empty space, it turns black, which is sort of a negative number. If you land on a black number tile, the number increases. Early on, you won’t have any way to get rid of black tiles, so you just have to avoid creating them. This keeps things fairy simple as you’re just learning how the game works. 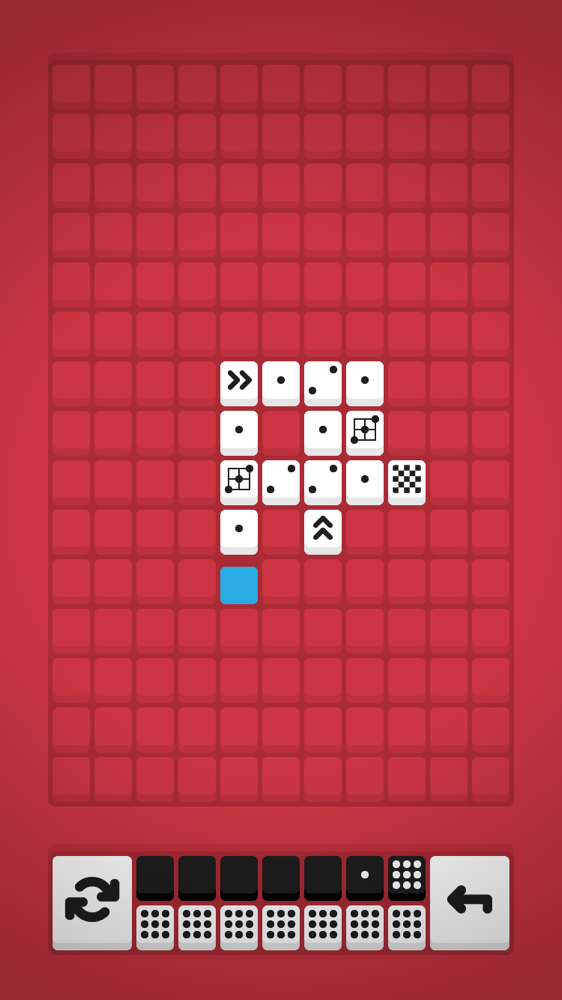 Early on, you’ll still encounter some interesting tiles, like arrows that push you in the direction they’re pointing, or connected tiles that are spread apart but count up or down at the same time. Both these tiles add some challenge and variety, but they’re still not enough on their own. Ok, so the game shakes things up a bit and shows you that the board has no defined walls. If you hit the right of the screen and continue right, it wraps around and you’ll end up on the left side. This works up-down, as well. So things are getting more complicated. Still, this isn’t the most surprising mechanic in the game. Neither are the portals that teleport you from one to the other, as you might expect. 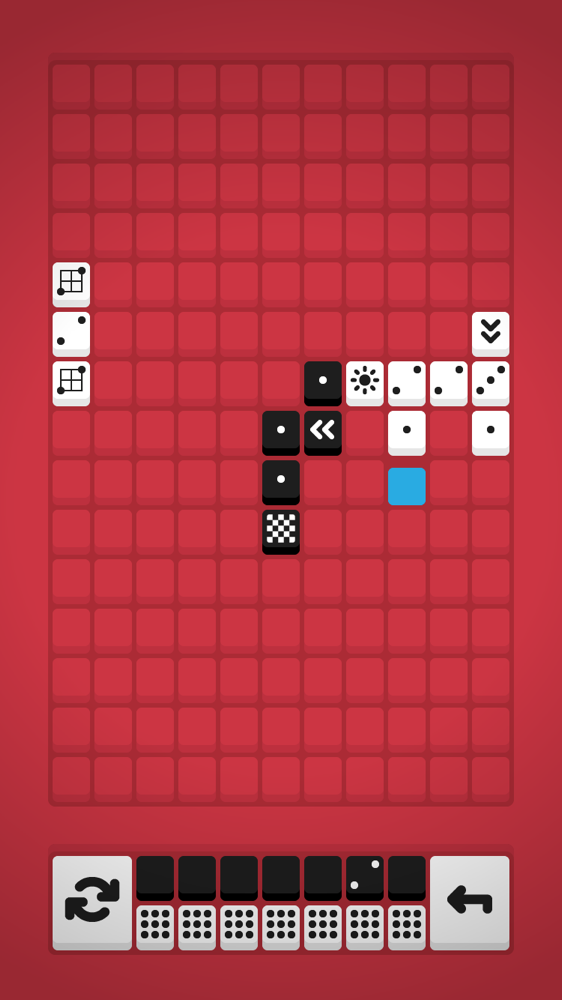 Where things really get interesting — and pretty mind-boggling — is the sun tile. When you land on it, all white tiles turn black and vice versa. This might not seem like a huge deal at first. But remember, you can create your own black tiles. As long as there’s a sun on the board, there’s a way to get rid of them, so you can start adding to the path instead of just removing tiles from it. Now you have to figure out where to place new tiles and whether to add numbers to already existing black tiles. While arrows, suns and portals disappear when you land on them, regular numbered tiles and connected tiles always increase when they’re black. So for example, you may have to land on a connected tile on one area of the board to make sure another connected tile doesn’t disappear before you need to use it. These few elements offer a surprising amount of depth, forcing you to really work your brain to figure out how to get a clear path all the way to the exit. You can see my process for solving a puzzle in the video below.

Now, all this wouldn’t work so well without an undo button. Thankfully, that’s been included, leading to an enjoyable game that encourages experimentation instead of causing endless frustration and tedium. If you’ve been following me for a while, you’re probably used to my complaints about lack of an undo button in puzzle games. I prefer to work out a solution by playing the game, not by staring at it and planning it out in my head. It’s especially important here, as you could work out two-thirds of the path and then get stuck near the exit. Having to restart would be incredibly tedious. But being able to rewind a few moves back means you can keep trying to change that one section of the path as much as you want without having to retrace all your steps. Button placement is also important, and the developer has made sure it’s easy to reach but not so easy to hit by accident. Everything’s also very responsive, so playing has almost become reflexive in only the few days I’ve had the game. Because of this, I’ve been finding the puzzles enjoyable to work on and rewarding to solve. And that’s good, because there appears to be 9,999,999 levels in the game, based on the game’s visual feedback. So as long as you like the game, you’re getting your money’s worth. There will always be more puzzles for you to solve. 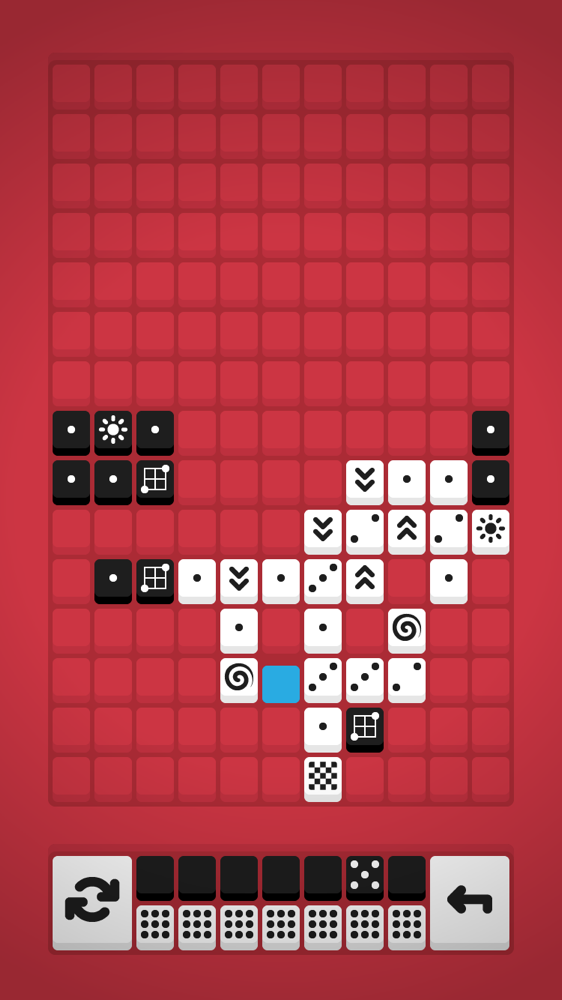 I do have some very minor complaints about the game, almost not worth mentioning. The game is very minimalistic — perhaps too much so. The only things on the screen are the puzzle you’re working on, the undo button, restart button, and the level’s number. There’s no menu whatsoever. There’s no way to go back and replay old levels so you can help someone who’s stuck. It’s also not optimized for iPad, so you’d have to make do with a lesser experience on there if that’s your only device. There’s also no iCloud and no leaderboard to compare your progress with others. However, these are all because the developer just didn’t have the time or funds, but he very much wants to work on all those features if the game does well. So if you like it, tell your friends about the game. 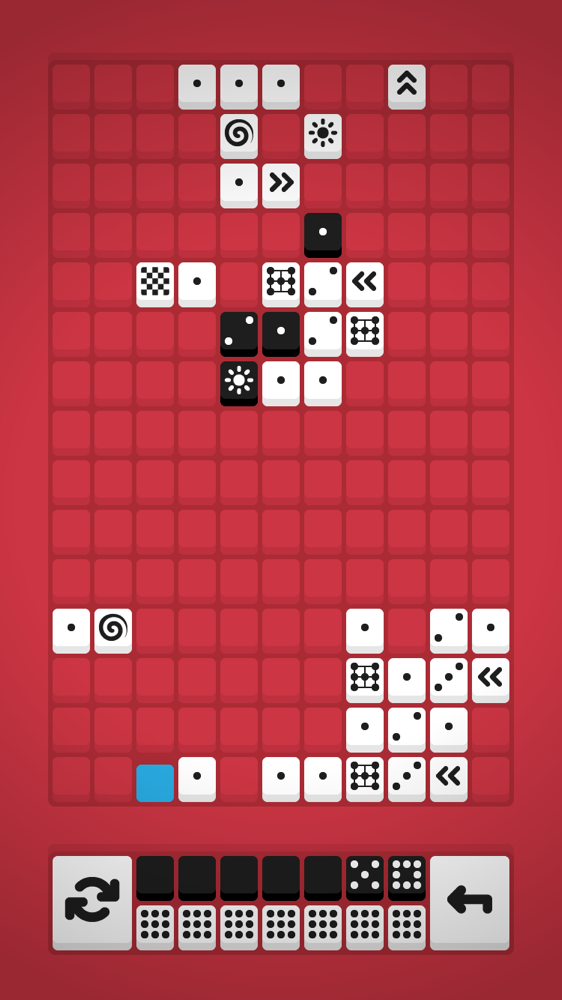 For $2.99, you’re getting practically unlimited puzzles in a tiny file size of less than two megabytes, and from what I’ve seen so far, these aren’t easy filler like you see in a lot of popular free-to-play games these days. I breezed through the first twenty-five fairly easily, but after that almost every level has given me pause. And as with YANKAI’S TRIANGLE, I like knowing that it will always be there for me to solve just one more puzzle. I don’t feel pressured to get through a certain number of them. I’m just enjoying solving each puzzle on its own, without any thought of what’s next. Usually I would prefer a skip option when I’m stuck on a puzzle, but I don’t miss it here. There’s just something so pure about focusing on one puzzle at a time, without thinking of what might be ahead. While I would appreciate those added features that I mentioned, the absence of them isn’t ruining my experience. I keep getting drawn to the game to solve one more level. If you’re fan of relaxed but challenging puzzle games, this is one you really shouldn’t miss. So stop stalling and grab the game here.

Perils of Man – Adventure Game by IF Games Ltd. Now Complete and Free to Download