I’ll be honest here. As much as I like puzzle games, I’ve never been very good at Rubik’s Cube. So when Miro Straka’s Euclidean Lands released last year, I was excited about it, as it was a very unique game, but I had a bit of a rough time with some of the harder levels, especially the bosses. I eventually managed to complete the game and get all the badges for minimum moves in each level. But it was tough. It was a game that demanded my full attention. Even though it’s a puzzler that’s completely turn-based, one mistake could mean restarting an entire level, as there’s no undo button or forgiveness if you die. Still, I enjoyed my experience, despite wishing it might have been a little less hardcore. So, fast-forward to a few weeks ago when I got sent a copy of the new sequel, Euclidean Skies. Before even launching the app, I could see there was a huge graphics overhaul that I was completely on board with. Plus, dragons! And if there’s anything that can get me excited about a game, it’s dragons. I was eager to dive in and see how the mechanics evolved, while at the same time a bit worried it would melt my brain. So how did I fare? Keep reading to find out.

Right away, things already felt vastly different. The first level has you walking along a row of rotatable cubes, instead of a larger cube made out of small cubes, as in the first game. Besides rotating each cube individually, you can also rotate the entire row around its axis, which is necessary in order to reach your sword and then the door. Nothing’s too out of the ordinary yet, but another level in and the axis moves. Now the individual cubes don’t line up evenly if you rotate one. With a little effort you can still keep them together. But you can also rip the entire structure apart and end up with a bunch of floating platforms that aren’t even touching. This is the main difference between Euclidean Lands and Skies. Instead of compact structures that hold their shape, you end up with pieces flying everywhere unless you’re extra careful about each rotation. It also means that this time the puzzles are more about creating paths than killing enemies. Often, the enemies are the easy part and the hard part is getting to the door. 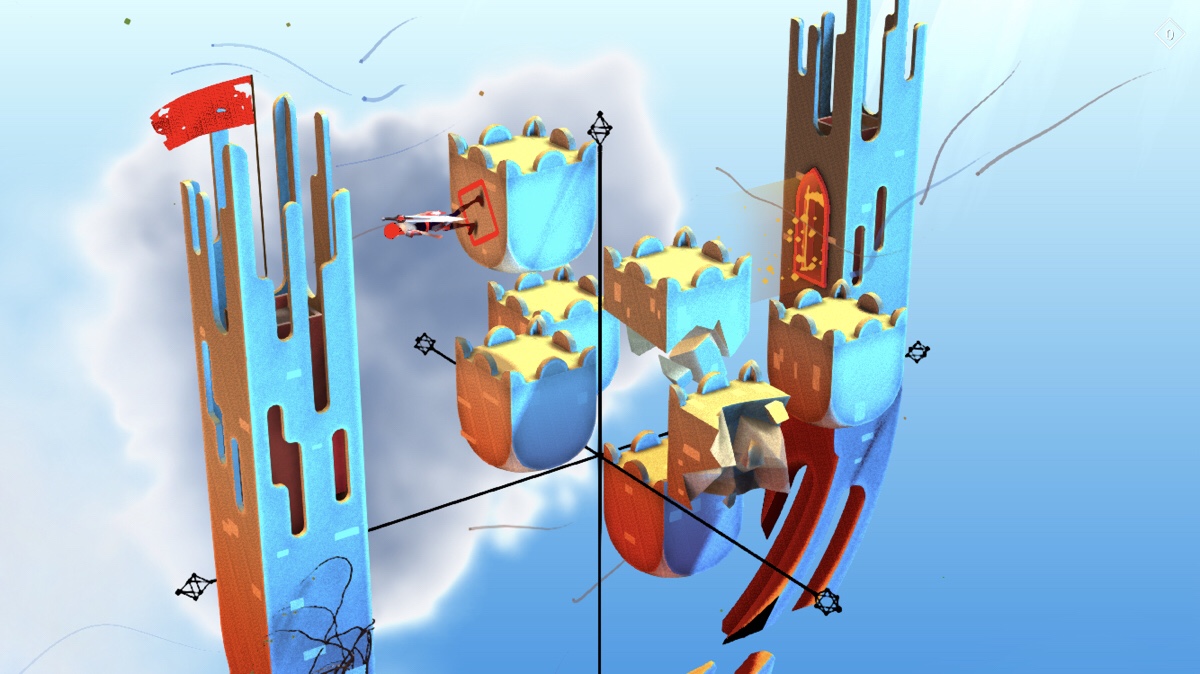 Another noticeable addition is the ability to smash certain enemies with the landscape. The first time I did it was purely by accident and I thought maybe I cheated. I learned soon enough that it was intentional and that it’s part of the strategy. Sometimes, you can rotate a piece into the weaker enemies instead of attacking them with your sword. There’s even a dragon you need to destroy in similar fashion. Another change is that you break up the platform an enemy is standing on to make him change direction, thereby giving you an opportunity to attack him instead of getting killed. And since you never know where you’ll end up in relation to an enemy, the game even lets you attack them from walls, not just the floor. It adds a whole other dimension to the strategy, and when you manage to kill an enemy that way after failing to do it the more conventional way, it can be incredibly satisfying. 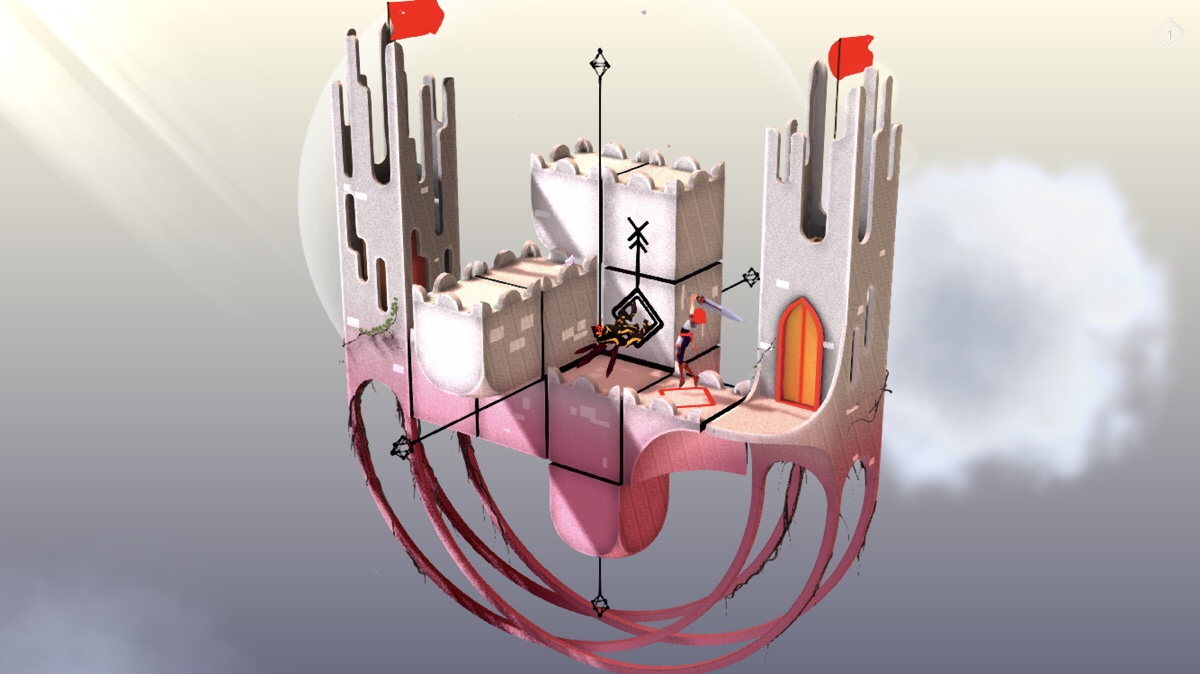 That said, it took me a while to appreciate all this. When I got the game weeks before release, I played through the first fifteen levels and got stuck on the sixteenth. I used some of the limited skips to unlock a couple of more puzzles, but I still felt lost. I didn’t have the headspace to deal with all the freedom I was given, and I just ended up with both my head and the platforms spinning all over the place until I got frustrated and quit. I had plenty of other games to play that were far less taxing, so I didn’t touch the game for maybe another week or two. When I did finally give it another chance, I must have been coming with a clearer head, as things started to click into place and, before I knew it, I was grabbing all the achievements and solving puzzles that previously seemed impossible. By the time I first got eaten by a dragon, I had already started improving, so I was able to laugh instead of screaming in frustration. 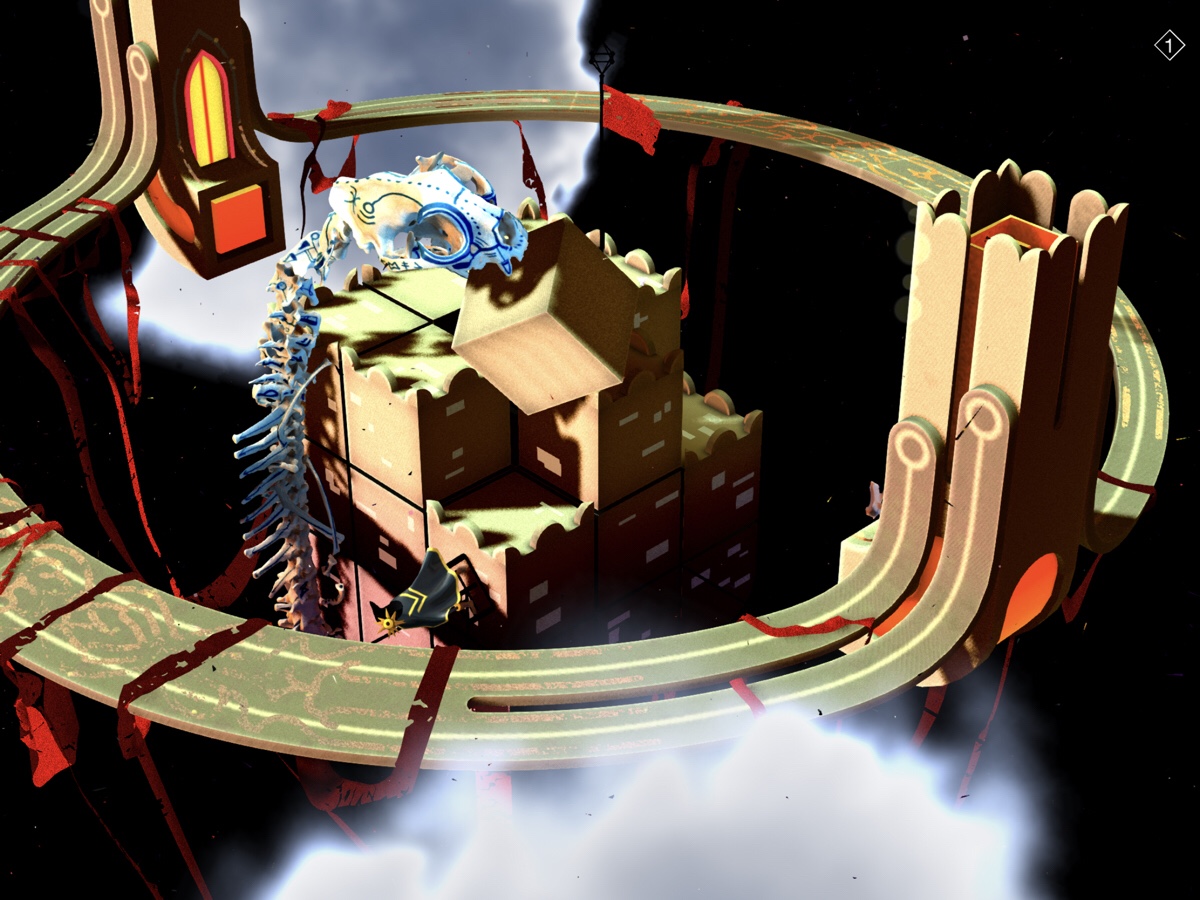 Once I got back into it, I learned to appreciate just how much thought went into each puzzle and mechanic. There was still some frustration due to the somewhat fiddly controls, as a piece might rotate the wrong way than you intended, or the camera might not let you see the entire structure. Sometimes, a cloud or decorative piece of structure even blocks part of your view. And once again, there’s no undo button or forgiveness if you accidentally get killed. It doesn’t matter how much time you spent on that level or how close you were to completing it. If you die, you start over. But I actually found death less of an issue this time around. I ended up restarting levels myself because the structure got so messy that it seemed easier to start over than try to piece it back together. This is a game that demands your attention, and you need to move pieces slowly and carefully or you may end up creating a shape that’s so messy you can’t manage it. You must be very deliberate with your movements. If you just rotate things willy-nilly, it will likely just lead to frustration. 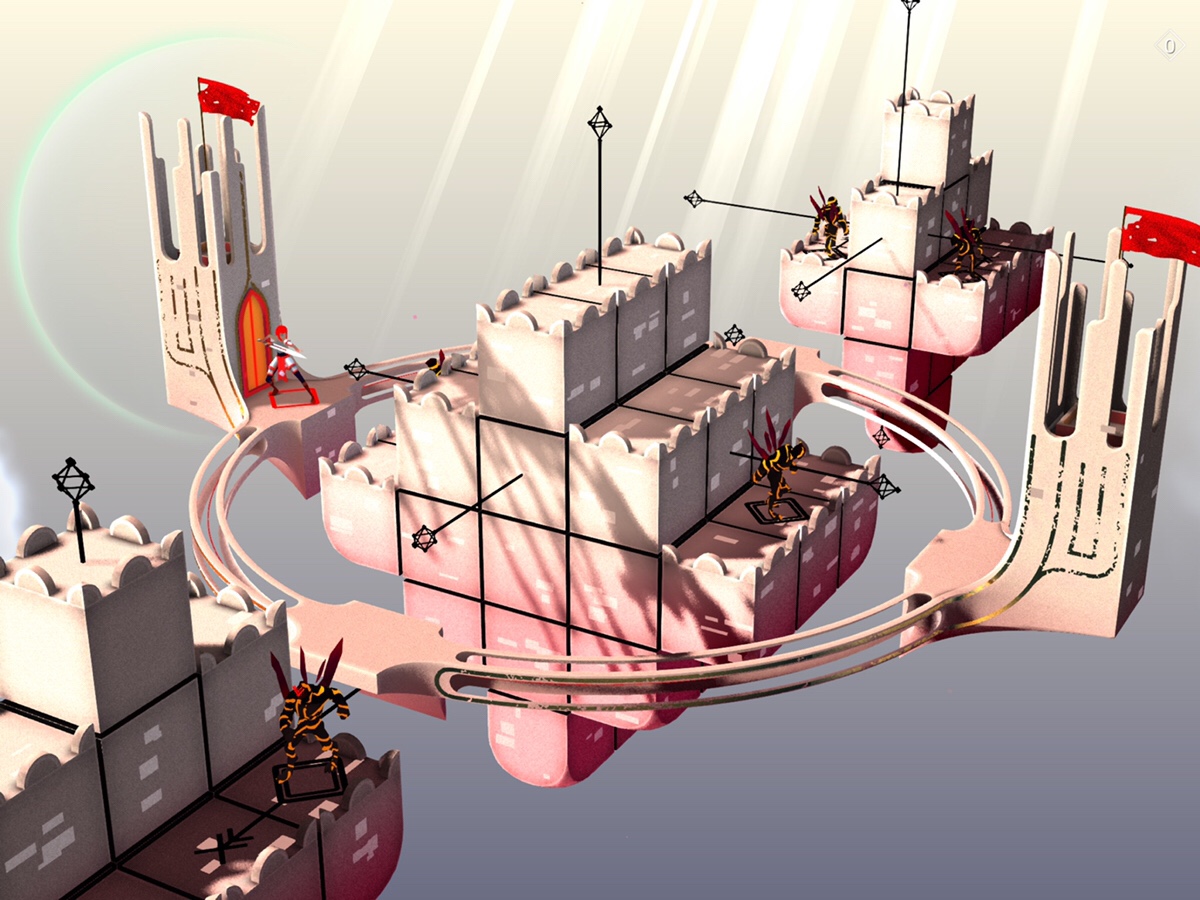 Like I said earlier, the graphics got a huge facelift, and there a big reason why I was so reluctant to let the game defeat me. The original was impressive on its own, and it did do some fun things like have words explode out of the center of a cube when you rotate a side. But the amount of detail here far surpasses all that. Besides the towering dragon skeleton, you’ll see birds fly by or land on the structure while you’re contemplating your next move. Even something as simple as a door unlocking can be a wonder to behold. Vines entangle towers, flags blow in the wind, and rain pours down from the dark sky as a chained beast waits for you to come within his grasp. I also love how the warrior’s pose changes with each step. The structures themselves are also much more intricate in this sequel. You’ll want to persist through each puzzle just so you can see what’s next.

And while I’m not a huge fan of augmented reality, it is a fun gimmick here. If you play normally, you can only zoom in on things so much. But in AR mode, you can go inside the dragon’s eye socket and see the warrior woman’s face. Oh, and you’ll also get to see clouds in your kitchen. The controls also work the same way as the do without AR, unlike some other games that have tried something similar. I can’t see myself playing through whole levels like that, especially the more expansive ones, but I would totally pull out my phone to show it off to a friend. Even if I don’t use it, I appreciate the inclusion, as well as the choice to make it optional. 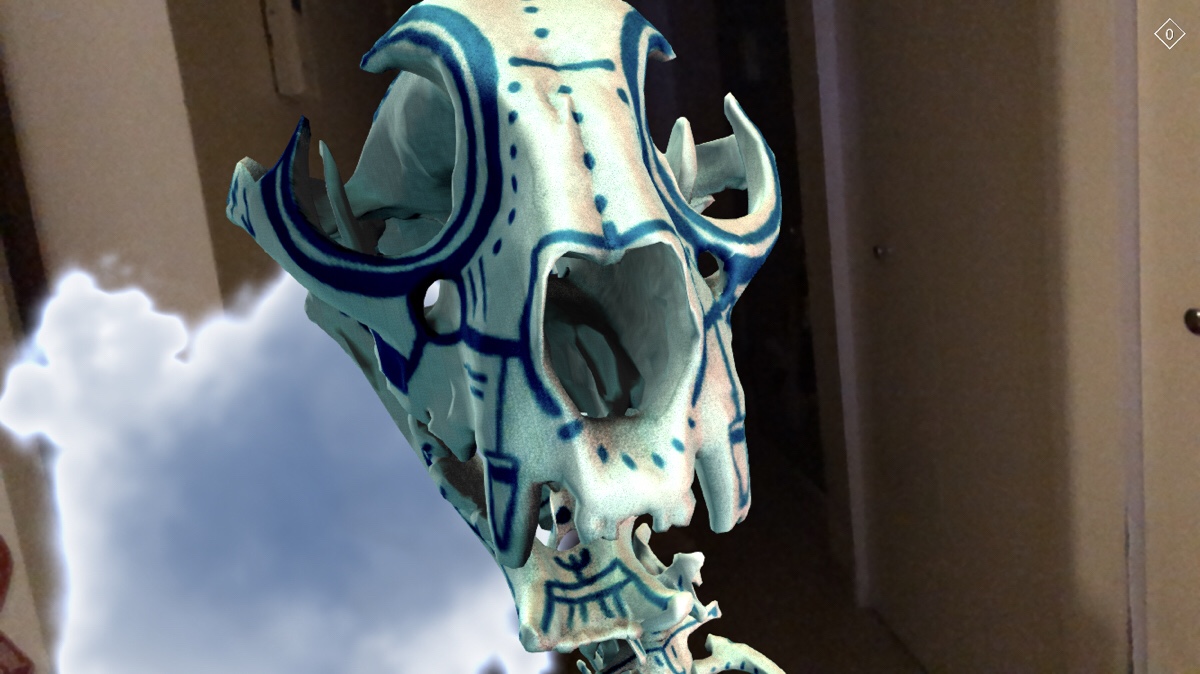 Some other features include iCloud sync, which is very welcome here. The game is best on a nice big iPad, but being able to work on a puzzle on the go means players are much more likely to stick with it to the end. And the developer is also aware that this is not an easy game, so he included hints for each level in case you’re hopelessly stuck. I found them useful for learning about mechanics I wasn’t aware of, without giving so much help that it ruins the fun. The achievements are also more interesting this time around, as they’re not always limited to number of steps. Sometimes it asks you to create a certain shape, kill the enemies with your sword, or simply not to panic. I also found that the the extra goals gave me a focus when I didn’t know where to start. If you do get hopelessly stuck, though, there are five skips available. Use them wisely, though, as once you use them, they’re gone. Unfortunately, you don’t get to always have five levels unlocked at once. 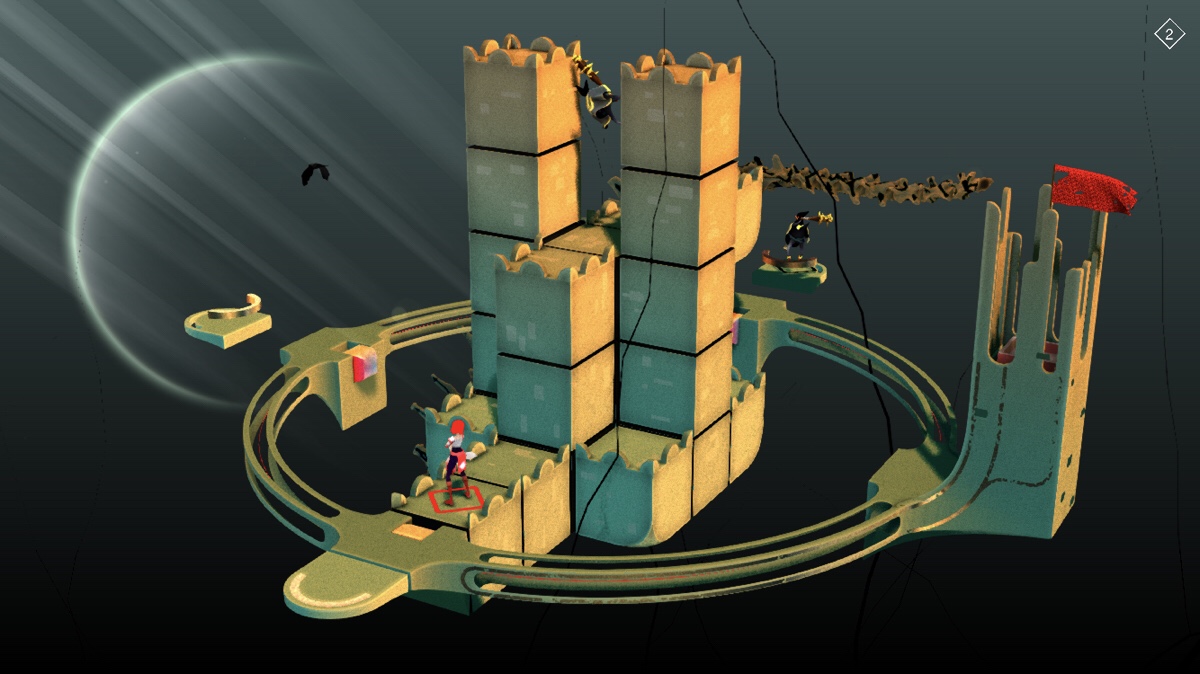 Euclidean Skies is a demanding game that won’t be for everyone, but those who give it a chance and stick with it will be rewarded with a smart puzzler brimming with fresh ideas. I can honestly say it feels like no other game I’ve played, including Euclidean Lands. The new mechanics change so much about it that the two games offer completely different experiences. This is not a sequel for the sake of a sequel, but a unique and satisfying game in its own right. I’m so glad I didn’t let my earlier frustrations keep me from sticking with it. I still have the last two levels to complete, as they’re particularly challenging, but I do hope to solve them eventually. If you’re up to the task, grab the game here and turn your world upside-down. 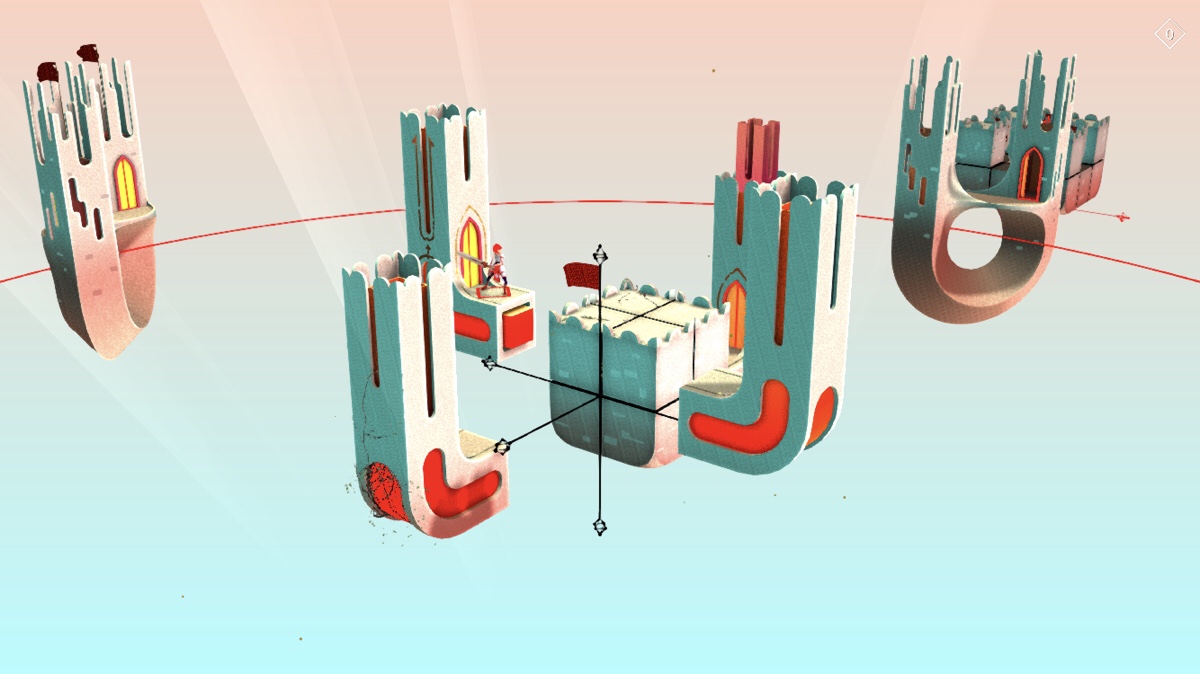 And if you get stuck, try my walkthrough guide here.