The Gardens Between
By: The Voxel Agents

Once in a while, a game comes along that’s the complete package and every little detail shows that it’s a work of love. The Gardens Between, by The Voxel Agents, is one such game, combining stunning visuals, clever puzzle mechanics, a moving story, and even a haunting soundtrack all into one breathtaking experience that can be described as nothing less than magical. Though it’s been out on other platforms since last year, it finally made its way over to iOS and the mobile port has been given the same kind of attention to detail as every other aspect of the game. One might even argue that this is the best version to play, as you can have it with you at all times and at a fraction of the price. You may even feel guilty paying such a small pittance for this utter masterpiece.

The Gardens Between takes you on a wordless, dreamlike journey with best friends Arina and Frendt as they explore surreal landscapes that represent memories they’ve shared together. If you’ve seen screenshots or GIFs of the game, I don’t need to tell you how gorgeous it is. Each island they visit combines nature’s beauty with everyday man-made objects — a giant TV perches atop a mountain, a larger-than-life sofa bridges two parts of an island, and fallen Jenga bricks block the children’s path. The presence of things like potato chip bags, cardboard boxes, and even actual trash at times, is somehow both jarring and charming all at once. These bizarre yet awe-inspiring dioramas were what got my attention, but I was not prepared for how clever the puzzle mechanics would be, and how well they tie in with the visuals. 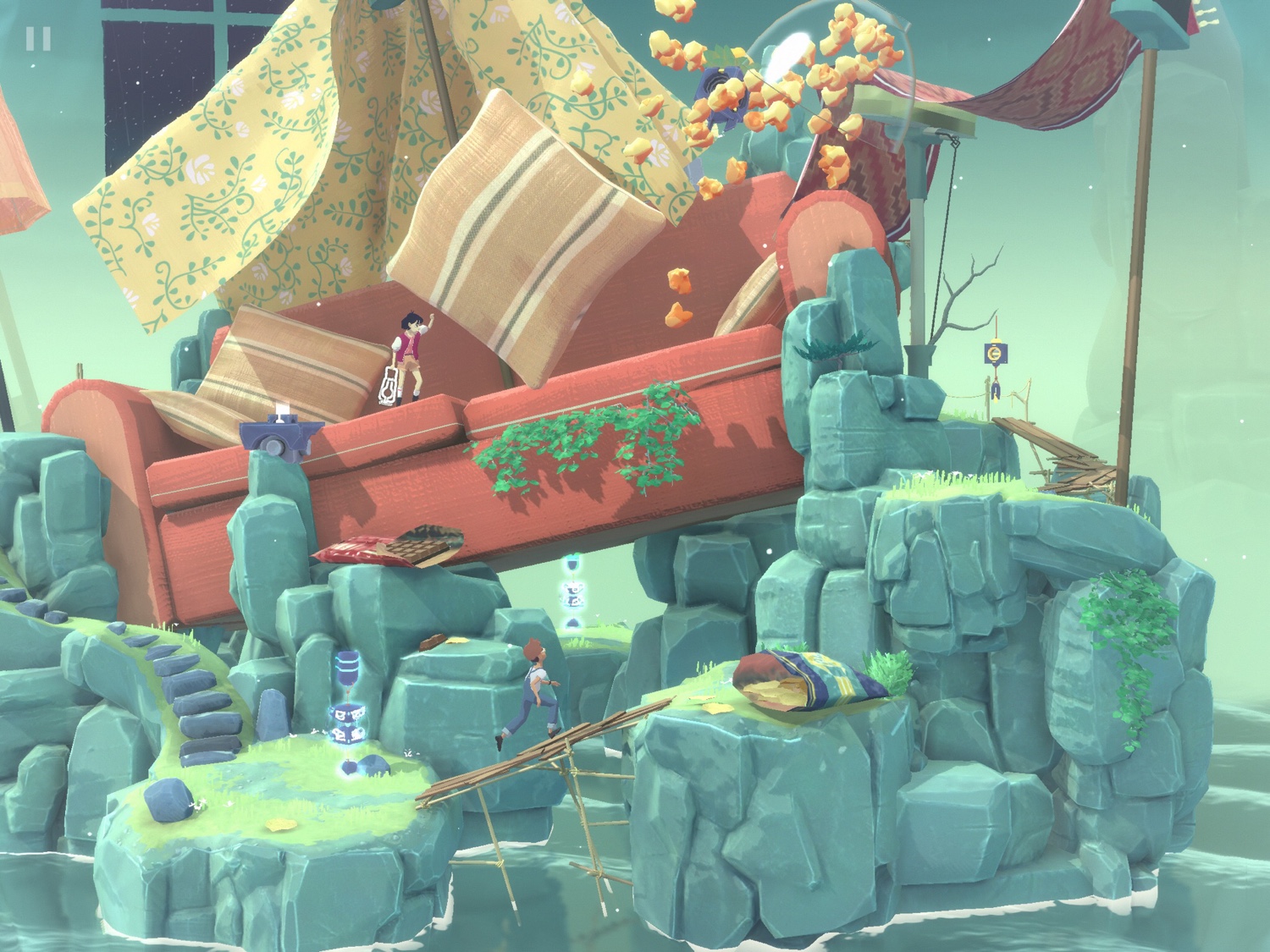 I don’t want to say too much about the puzzles, as discovery is a large part of the experience. But it revolves around the manipulation of time. The controls are super simple, making it perfect for touchscreens. You just swipe right and hold to move time forward, and swipe left to move time backward. You don’t control the children directly. As time progresses, they walk along the path until something blocks their way. If they encounter an interactive object, it’s highlighted and then you tap the screen anywhere to interact with it. Arina and Frendt each have different actions they’re able to perform, and even split up when necessary. Sometimes part of the puzzle involves figuring out how to bring them back together. 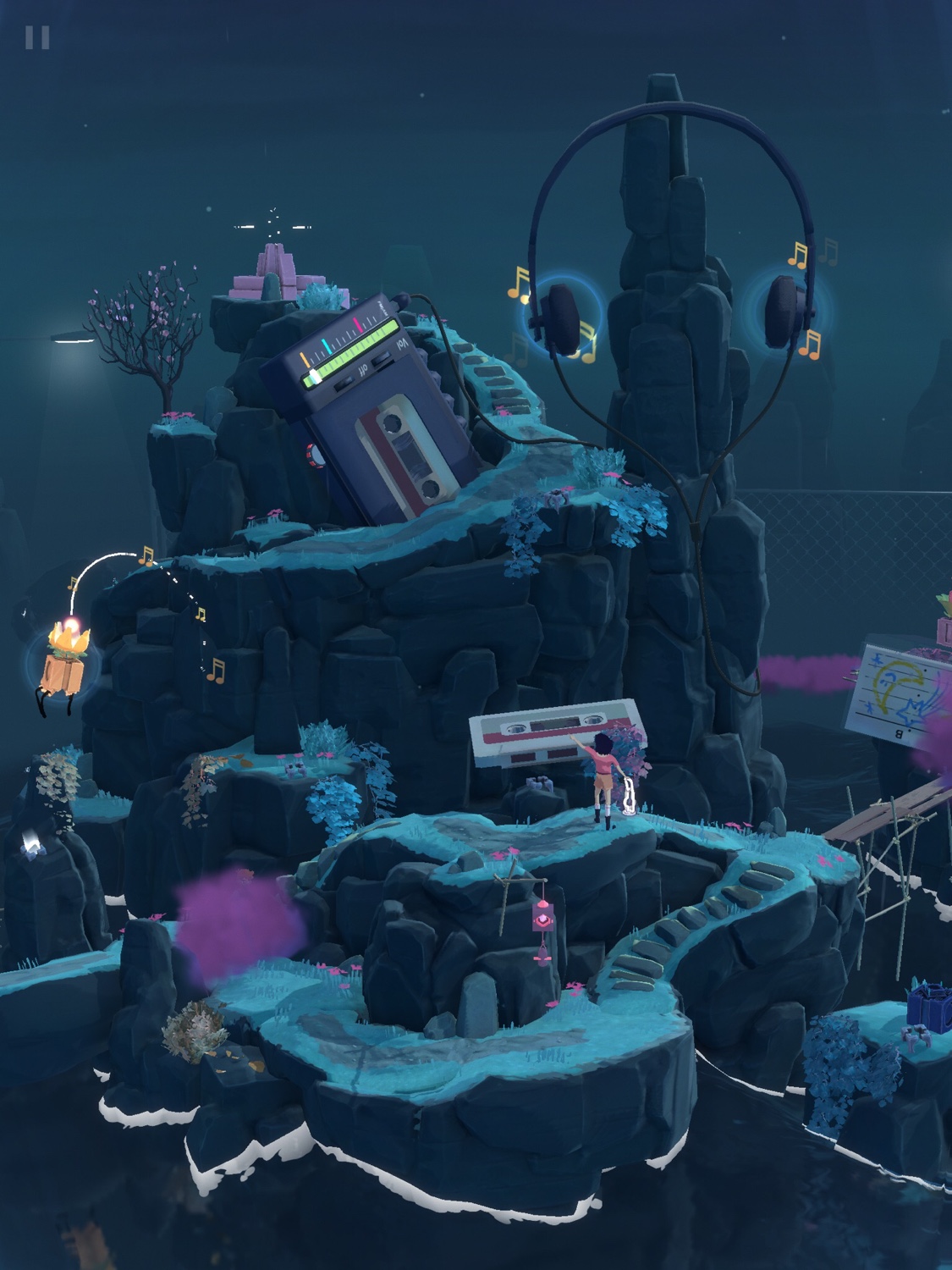 The main mechanics have to do with light and shadow, and Arina carries a lantern with her that can hold magical light sprouted from flowers. That light is used at the end of each level to power up the device at the top, but it can also create bridges or dispel fog. Not only that, but there are dark flowers that want to steal the light. Thankfully, the two kids meet other friends along their journey, in the form of flying drones. These cute little robots can carry the lantern for Arina, helping her prevent the dark flowers from consuming the light. Again, I don’t want to say much more, but there’s a surprising amount of creativity and cleverness hidden behind these very simple controls. And since you know which items are interactive, there’s none of that pixel-hunting nonsense you find in many adventure games. Instead, you need to observe what happens as time progresses and figure out how and what to change. 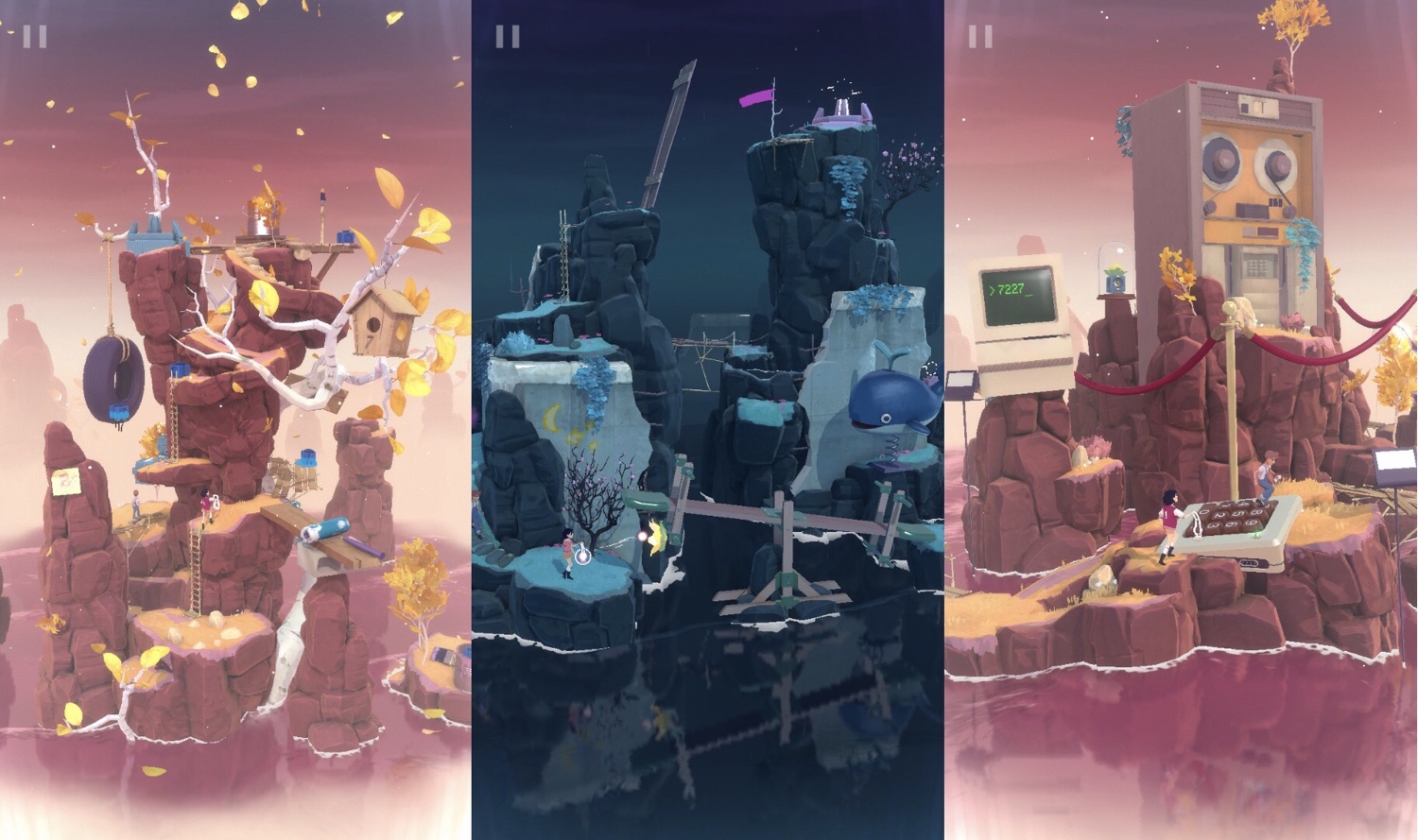 The puzzles are playful, encouraging experimentation. Even when I was stuck and unsure what to do, I never felt frustrated or thought the game was unfair. There were a number of times where I was being kind of silly and ignoring the game’s hints, but I wasn’t upset when I realized it. I just had an “aha!” moment, laughed it off and was excited to see what came next. The puzzles are generally relaxed and allow you to go at your own pace. There were a couple that required a bit more finesse than the touch controls offered, but it wasn’t enough of an issue to turn me off. It’s also impossible to mess up in a way that would require restarting a level, so the only thing that might happen is you need to spend a little extra time on a specific section. But overall, the controls worked perfectly well for the tasks at hand and I was thrilled to be playing on my iPad instead of a PC.

As I mentioned earlier, great pains have been taken to make sure this port is just as good — if not better — than its counterparts. While I personally prefer playing on my iPad for the extra details and comfort, I appreciate that the developers made it playable in both portrait mode and landscape mode on all devices. This means, you can rest it comfortably on your lap and use two hands to control it, but it also plays like a dream using one hand with an iPhone. It even works with a Bluetooth keyboard or Mfi controllers if you prefer to use physical controls. It’s also fun to play around with the different perspectives in portrait and landscape, as most of the islands stretch upward, and portrait makes it feel even taller. Thankfully, iCloud sync is included, so you don’t have to choose between your iPad and iPhone, or worry about lost progress if you need to delete the game to make space. 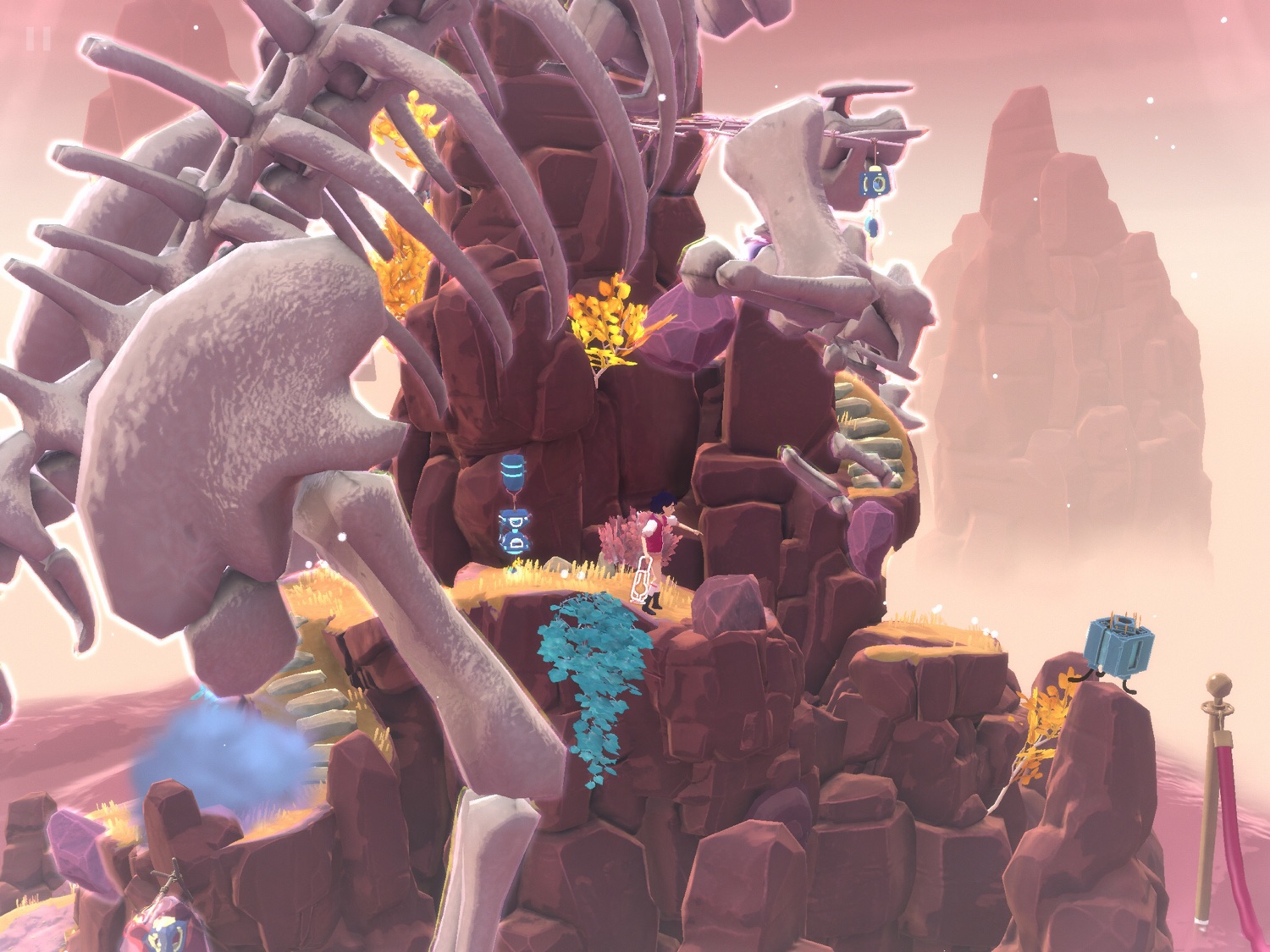 However you choose to play The Gardens Between, I highly recommend plugging in some headphones. The soundtrack is soothing, immersive, and never gets tiresome. Even though you technically could play the game without sound, you’d be robbing yourself of half the experience. So give this work of art the time and space it deserves. Don’t rush it; savor it, because once it’s over you’ll be aching for more. In fact, it’s such a special game that playing through the last island was a bittersweet journey. I enjoyed every second of it, and it brought everything together in one final awe-inspiring trek. But I was sad knowing I was so close to the end. There are a number of achievements to chase, though, and I was glad for a reason to dive back in for more. 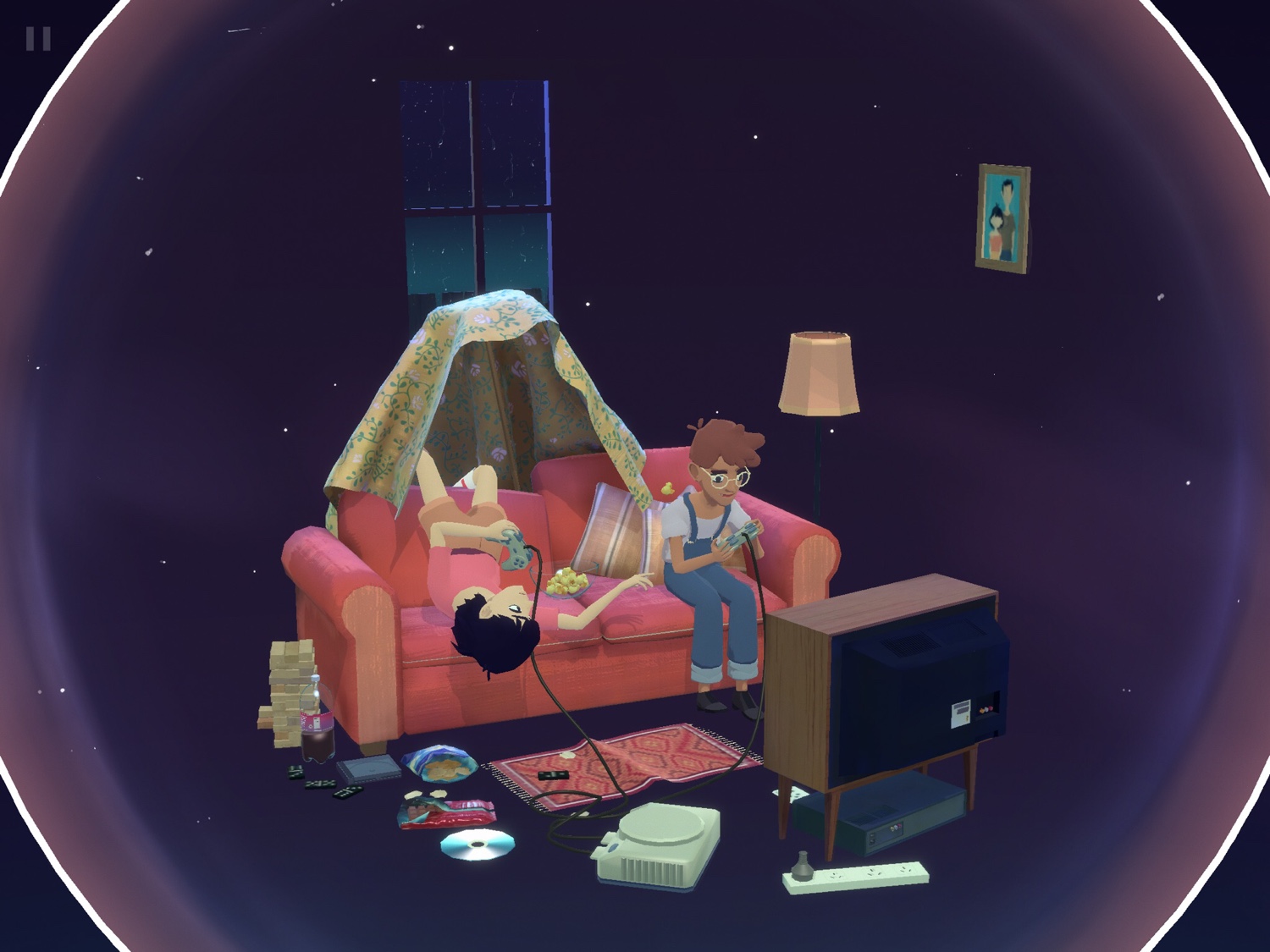 Simply put, The Gardens Between is one of those rare gems that everyone should play. I know it’s only May, but it could very well end up being my Game of the Year. There were so many moments that made me gasp and feel like a little kid again. It reminded me in some ways of Samorost 3 the way it mixes otherworldly visuals with clever puzzles. I know I’ve said this before, but it truly is magical. I’m so grateful the Voxel Agents decided it was worth their time to port this one-of-a-kind game to iOS, and without sacrificing anything. And if you have a newer device, you should enjoy it even more than I did, as this is one of the rare times I could see my iPad Pro 10.5″ being pushed to its limits. The Gardens Between is available now on iOS for the absolute steal of $4.99. Time doesn’t slow down in the real world, so make sure to grab it while you can and enjoy this brilliant work of art.