Somehow I’d never heard of Handmade Game’s ROOMS: The Toymaker’s Mansion before, even though it had been released as a free-to-play game back in 2013 as The Mansion: A Puzzle of Rooms. The developers regretted going that route and recently re-released the game as a fully premium experience with no ads or in-app-purchases. It now matches the PC version, featuring 144 levels across four different mansions. I don’t normally enjoy sliding tile puzzles, and you can see in my video below that I was struggling at first. But after spending some more time with it and giving it some undivided attention, it quickly grew on me. I’ve since completed close to a hundred levels and have a lot of thoughts to share about the game.

In ROOMS, you play as Anne, a little girl who wanders in middle of the night to a strange mansion, accompanied by her lantern that comes to life. This lantern ends up being your guide, explaining different mechanics and providing encouraging words. He can even give light hints, but they’re nothing you can really rely on. This mansion is full difficult puzzles and you’ll have to solve them yourself. The way it works is that each level is made up of tiles. Anne can walk between connecting tiles if there’s an opening. She can also climb up or down ladders to interconnected tiles. The goal in each level is to get Anne to the door. But the catch is that you can only move the tile that Anne is on. The rules and mechanics change as you progress, but that’s the main idea. 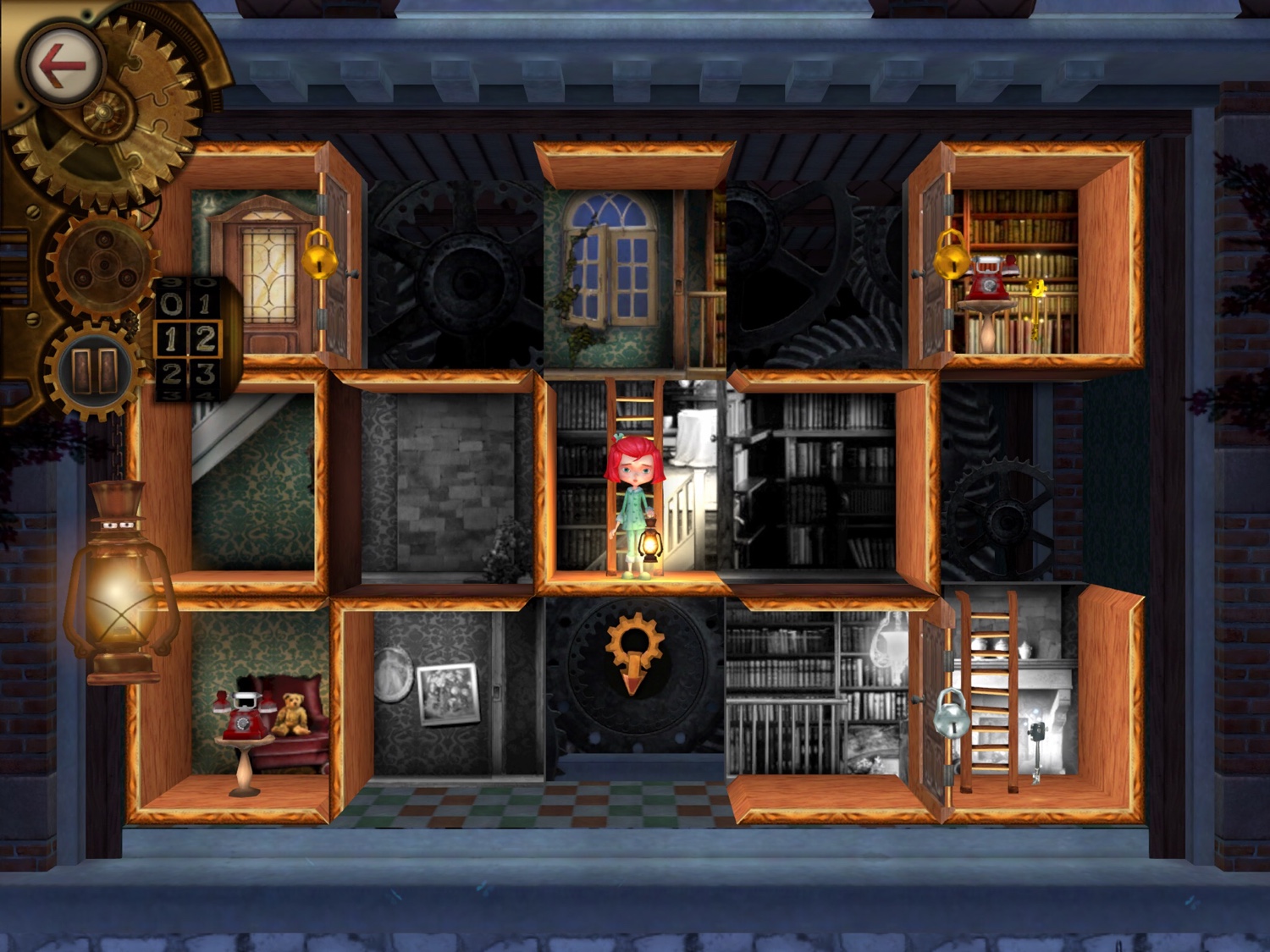 The game is split up into four mansions, each with different themes and mechanics. At first, you only have walls and ladders to worry about, as well as locked doors that require keys. But soon enough, you’re introduced to teleporting telephones. These allow you to ignore the limits of time and space and instantly transport from one tile with a telephone to another tile with a telephone. Then you’ll see wardrobes that swap the tiles instead of Anne. Later, you get bombs that break through walls, kill evil puppets that are after you, and even kill you if you’re not careful. There are magnets that push and pull other tiles, as well as mimicking tiles that move together. Each new mechanic is introduced in a way to ease you into it before ramping up the difficulty. So the start of each mansion is going to be easier than the last few levels of the previous mansion. 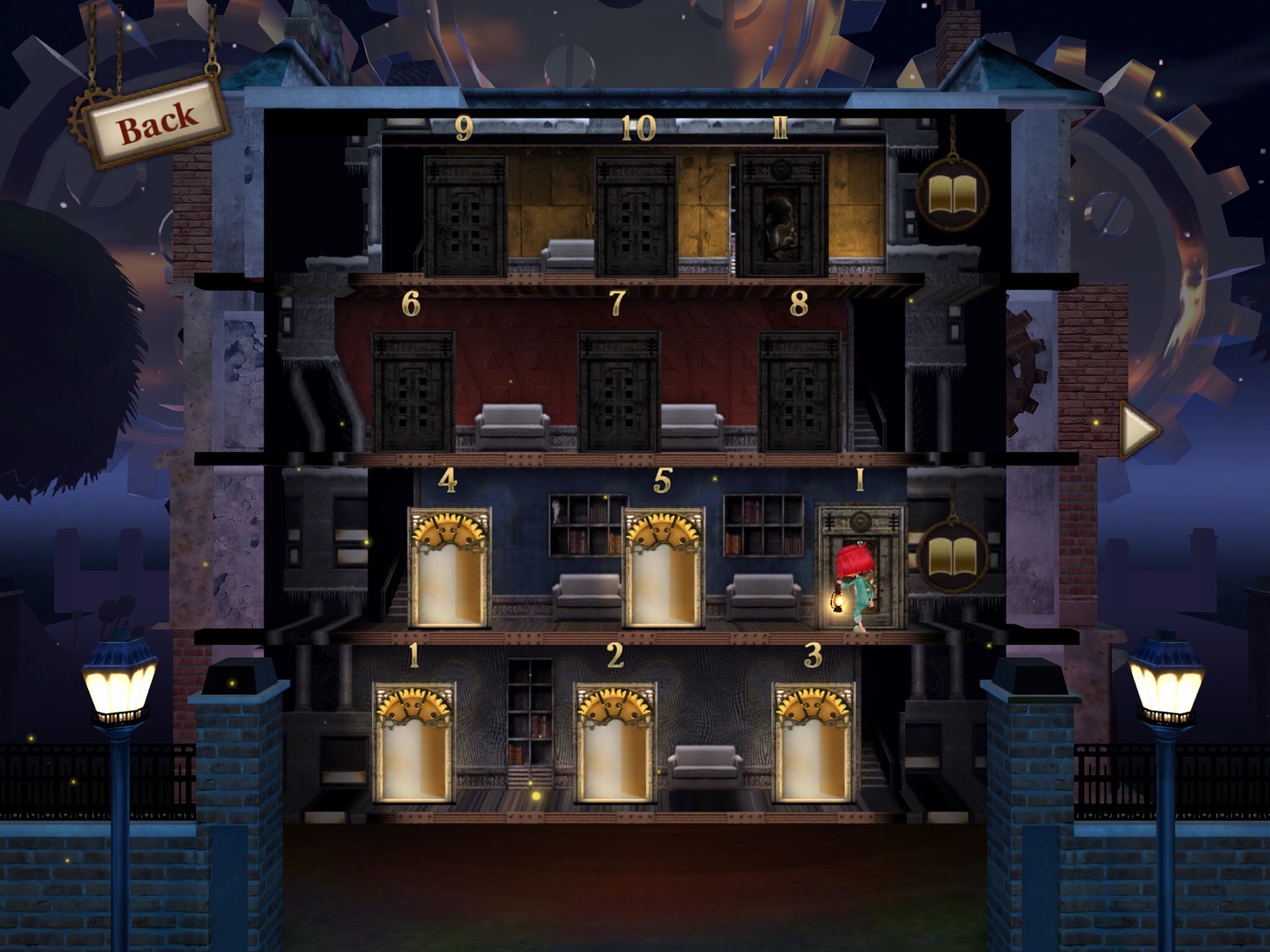 The controls work well for touchscreen devices, though I was initially surprised that you tap on arrows to move a tile instead of swiping. I quickly got used it and realized why it makes sense that way. It’s because everything you do requires a tap, so it stays consistent. For instance, you tap on a tile to walk there, tap on a telephone to teleport, tap on a bomb to set it off, etc. I do wish it wouldn’t allow you to activate a bomb when moving to a tile, as I sometimes accidentally killed myself that way. But it happened rarely enough that it’s not a dealbreaker. I also find that the game plays well on both iPhone and iPad, though I prefer playing on my iPad when I have it handy. Thankfully, the game has iCloud sync, so I can play in bed on my iPhone and continue the next day on my iPad. The only catch is that you have to remember to upload and download to and from the cloud. The developers have stated that they want to make it automatic, so hopefully that will happen sooner than later. Either way, it’s a small inconvenience for a feature that is very much welcome. 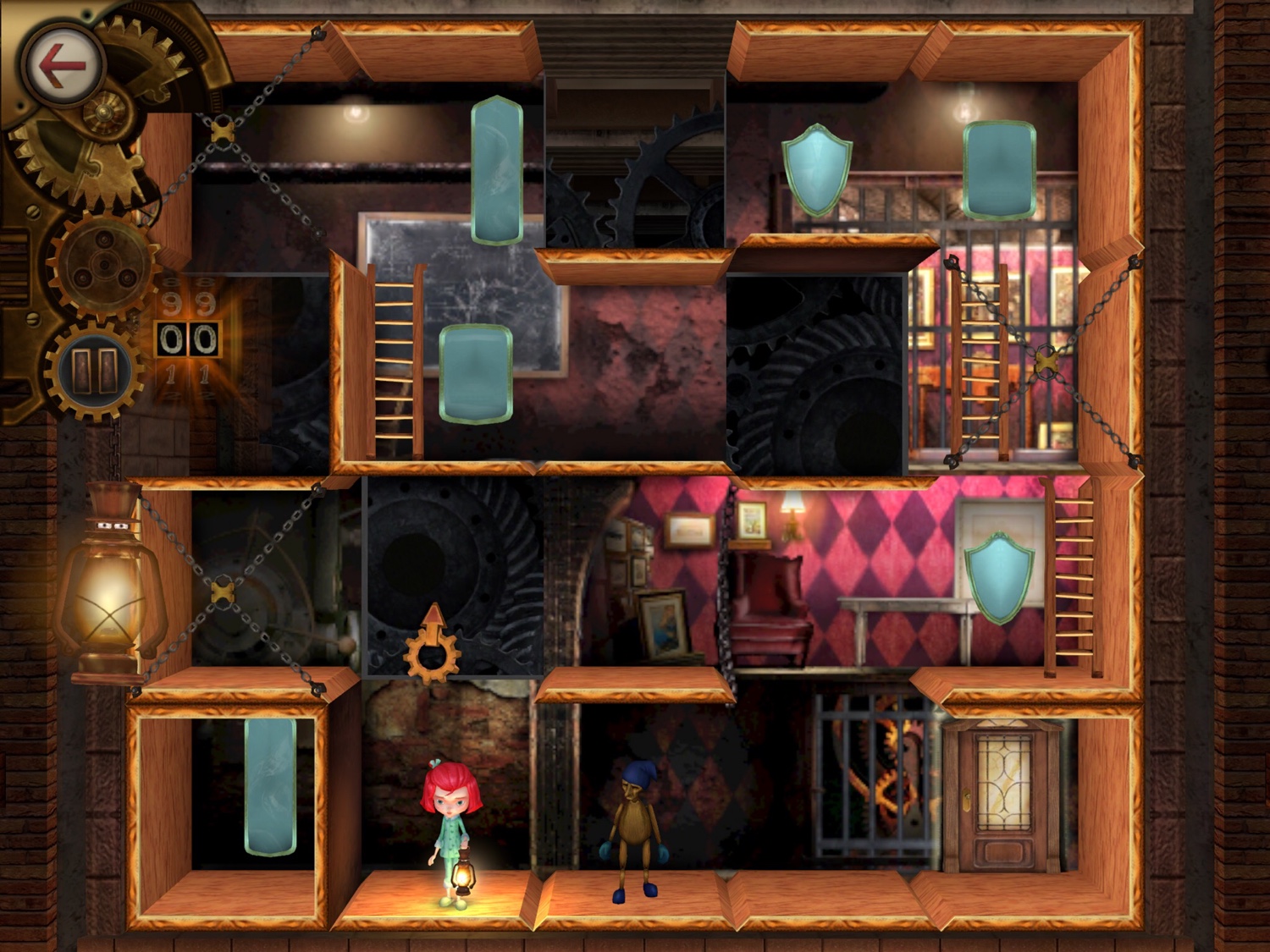 The game also utilizes a three-star system based on the number of moves you use to complete a level. There’s a counter that counts down each time you move a tile. If you complete the level without going over that limit, you earn three puzzle pieces. Once you get down to only one puzzle piece, the game stops counting and just lets you use an infinite number of moves without any further penalty. What’s nice about this is you can mess around to figure out a solution without worrying yet if it’s the right solution. You can then go back and work out a cleaner path to the door. From what I can tell, the game also doesn’t require a certain number of puzzle pieces to progress. So if you don’t like worrying about the moves and just want to focus on getting through the game any way you can, that’s completely fine. Those who want more of a challenge can still aim to collect all puzzle pieces. It’s nice to see a game cater to all players and not force one type of play on anyone. I also appreciate that I can be stuck on a level for a long time, and other than a suggestion that maybe I should restart, the game doesn’t bother me. It doesn’t try to convince me to use hints or skip the level. 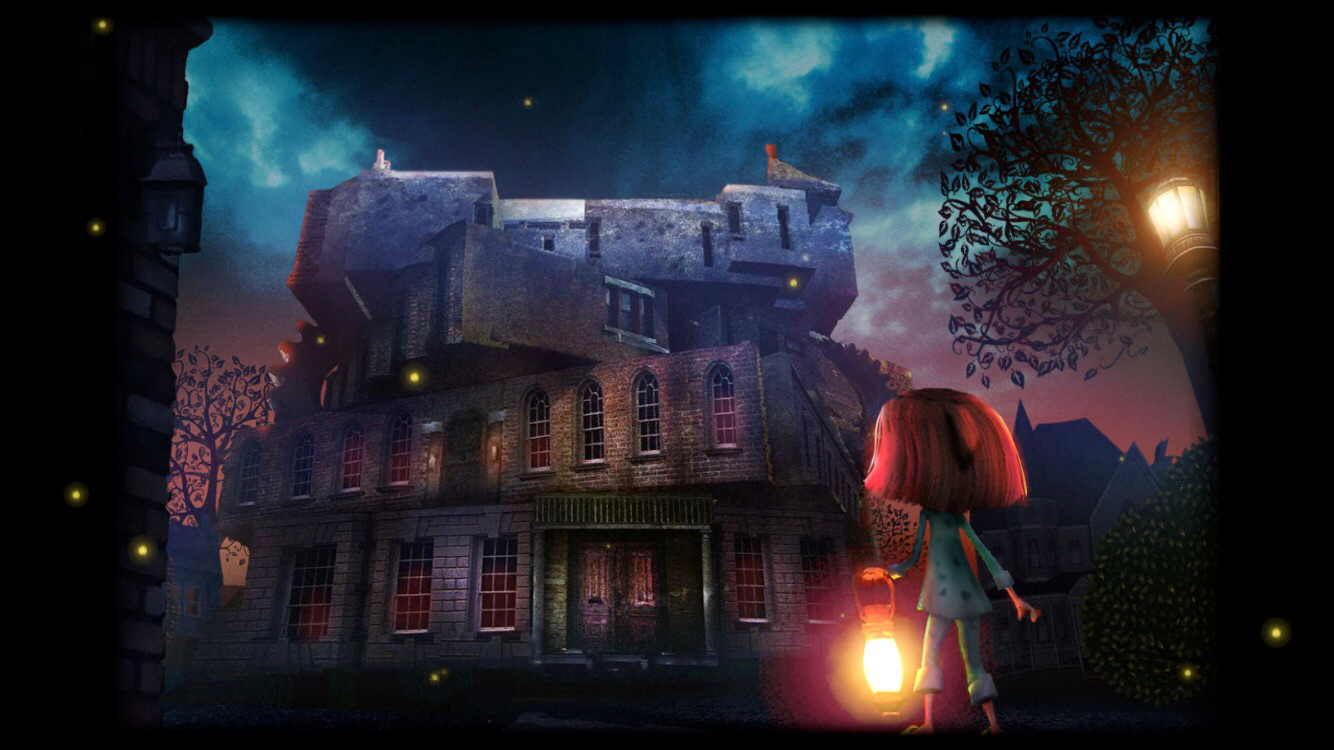 Speaking of skipping, there’s actually no way to do so. Normally, this would be an issue, but the game offers several ways to keep you from being stuck on one level. First, there’s the ability to brute force the level, like I said, and ignore the move counter. If you’re having a lot of trouble getting three puzzle pieces, that’s the best way to keep moving forward. But you also unlock the next mansion after you solve the first fifteen levels of the previous mansion. Since the last five levels are always the hardest, you should be able to make some decent progress on the next mansion before getting stuck again. And on top of that, each mansion has a basement that’s available as soon as you unlock that mansion. So you can have several levels available to you at once instead of hitting your head against the same one for hours on end. The basement mixes things up further by changing the rules completely. Suddenly, you can only move tiles Anne isn’t standing on, or have to move all the tiles at the same time. There’s so much variety that it’s hard to get bored. 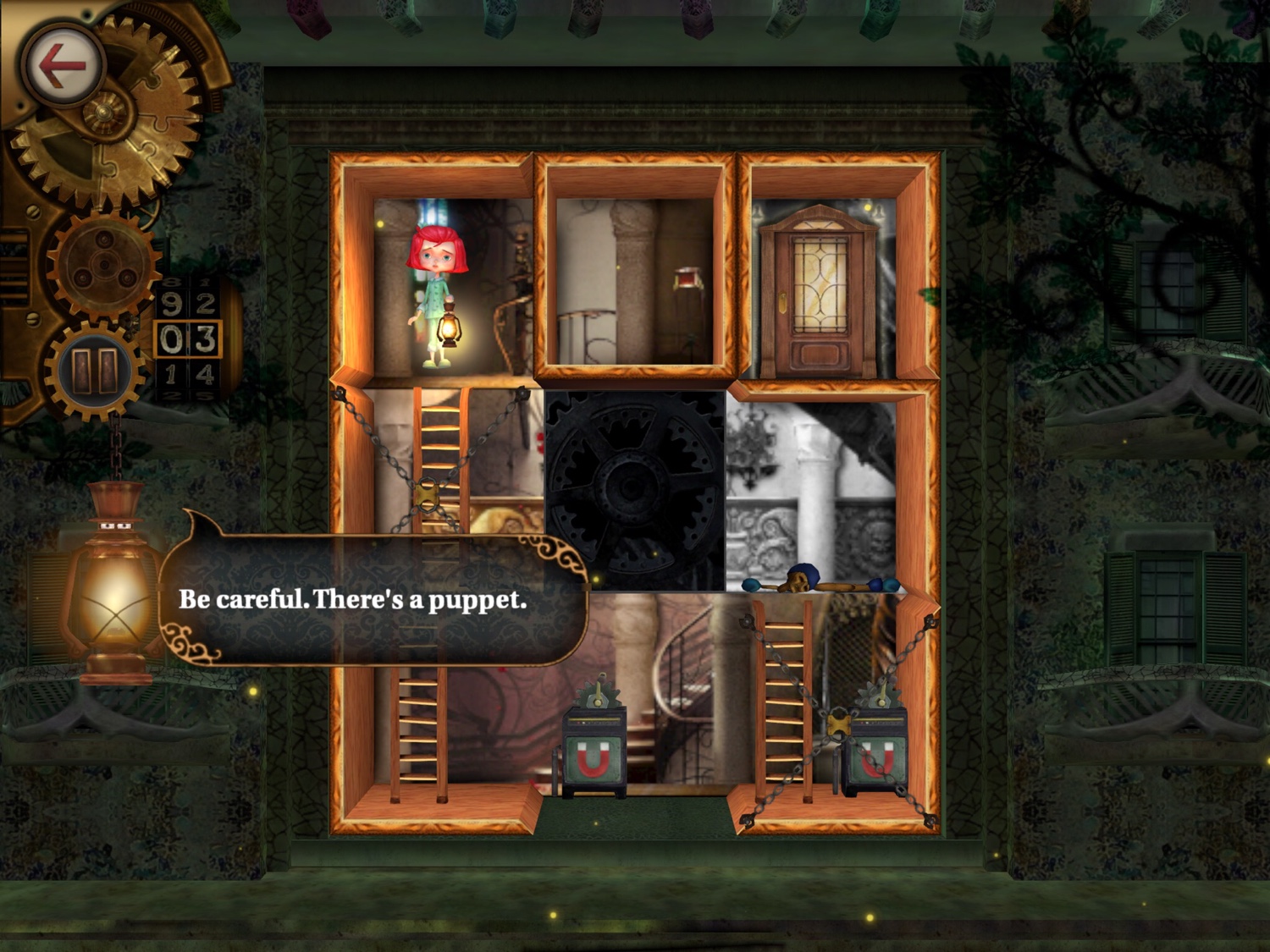 On top of the deviously tricky puzzles, there’s a creepy story about a Toymaker who gets obsessed with a magic puzzle piece that helps him create. It’s told through pages of a book that you unlock every few levels, with a sleek silhouette art style. There’s also dialogue between Anne and the talking lantern. This is mostly welcome, but he does get a bit annoying when he congratulates you for the millionth time on completing a level or repeats the dialogue because you needed to restart the level. In fact, my biggest complaint about the game is that it wastes a little too much time between levels. It’s not a huge deal the first time to have the tiles get pulled in one by one to the screen, then pulled out one by one when you complete the level. But if you’re stuck and have to keep restarting, those animations can get tiresome. I’d love to see an option in the settings to shut those off or speed them up. 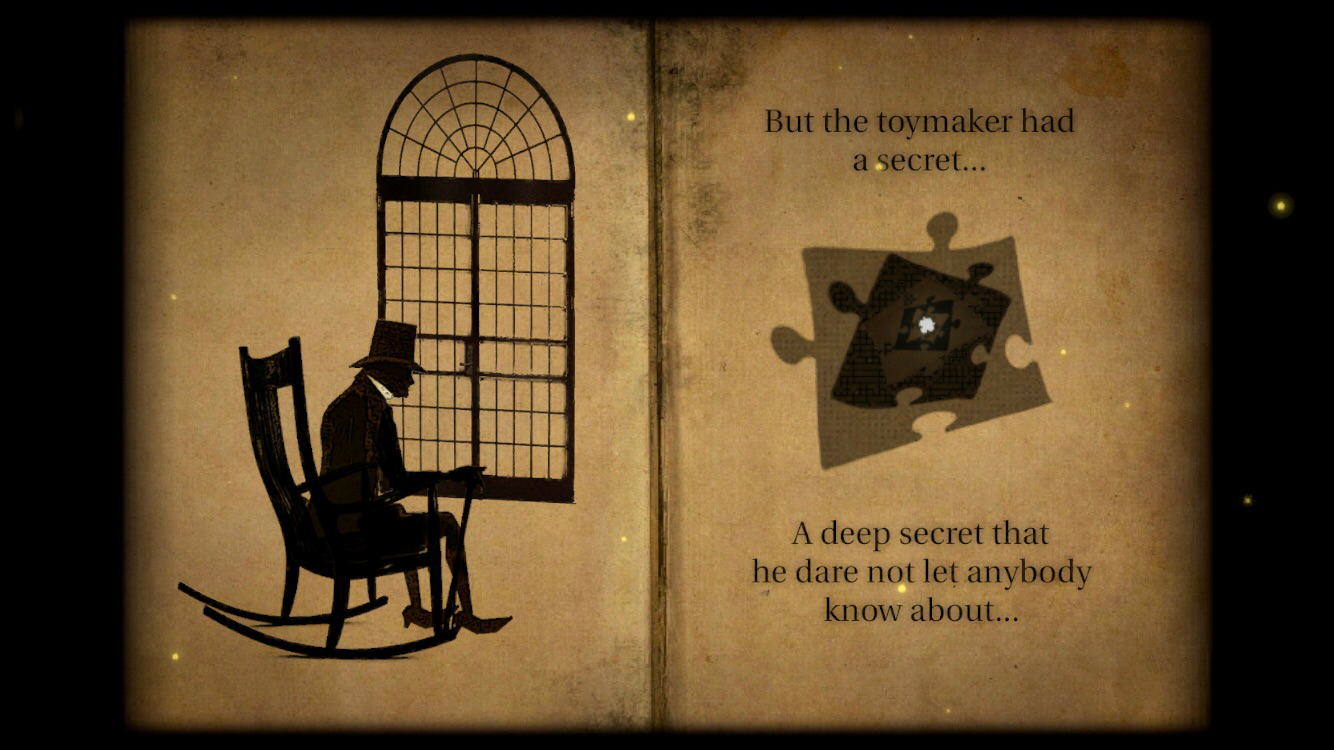 The game also has a weird numbering system, as the levels go from 1 to 5, then Roman Numeral I, then 6 to 10 and Roman Numeral II, and so on. The Roman Numerals appear to be trickier, but you can’t skip them, so I’m not sure why they’re meant to stand out like that. It’s not a big deal, but just seems odd. It would make more sense if they were bonus levels you could skip and come back to later.

I’m also not a big fan of the levels with high move counts, around fifteen or above. These usually end up feeling tedious and hard to plan out ahead of time. Those were usually the ones I’d have to solve in more moves than given and then go back later to try and solve properly. I much prefer the ones that ask you to find a solution using only a few well-thought out moves. 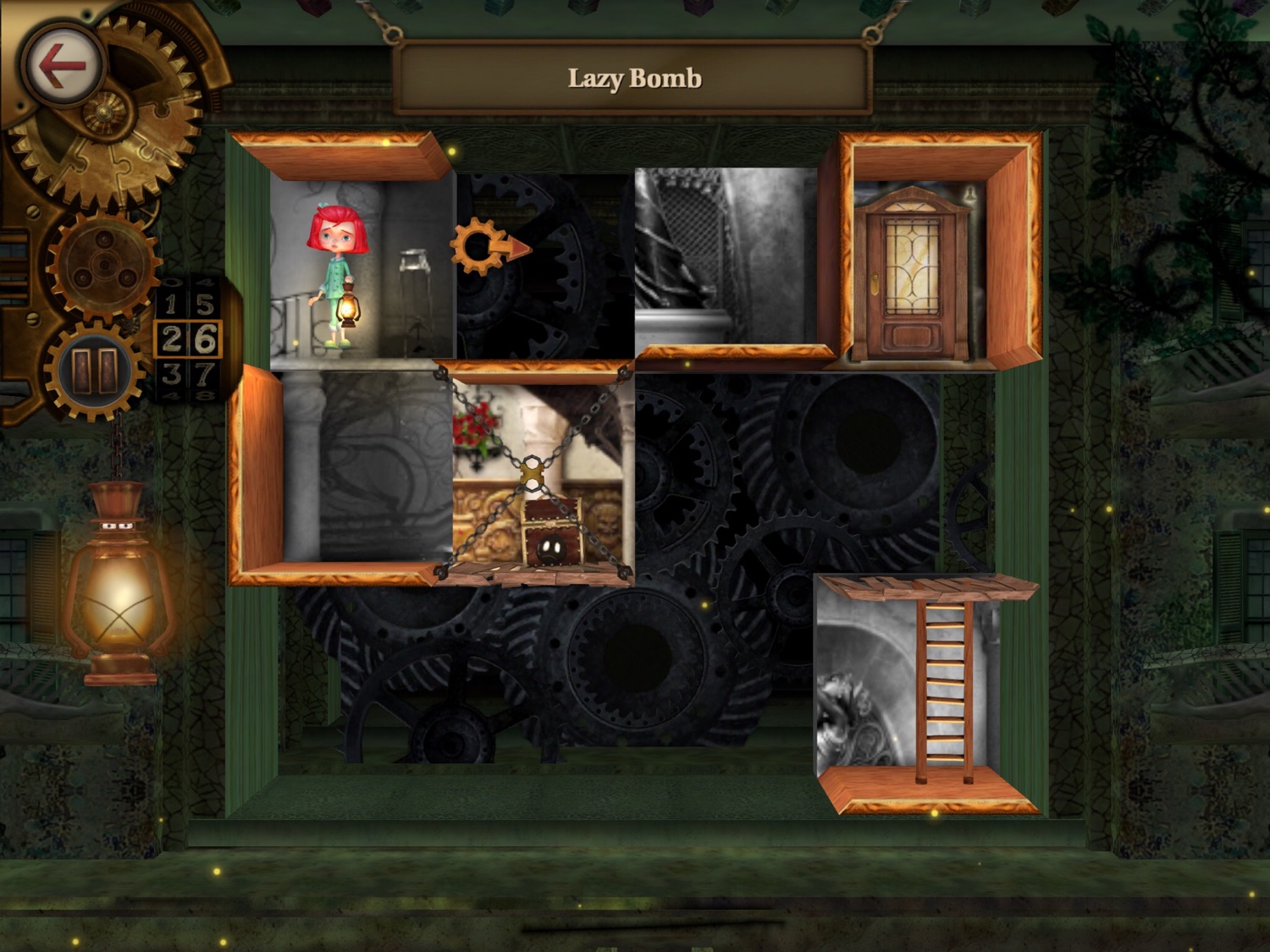 One thing I should also mention is that, for almost all the mechanics, only moving a tile counts as a move. You can walk around as much as you want, teleport as much as you want, and even explode bombs to your heart’s desire without worrying about the counter. Even using a magnet to push and pull tiles away doesn’t affect it. But the last mansion introduces a mechanic that allows you to rotate some tiles, and I was surprised to see that a rotation counts as a move. This muddies things a bit, both because it makes it harder to judge how many actual tile moves are needed to solve it, and also because it can be a little hard to tell sometimes how the tile will look when you rotate it left or right. The rest of the game is very forgiving with that kind of stuff, so it’s a little strange that it changes the rules so much in that last mansion. Still, I’m making progress with it. I just need to be a bit more careful with each action I take. 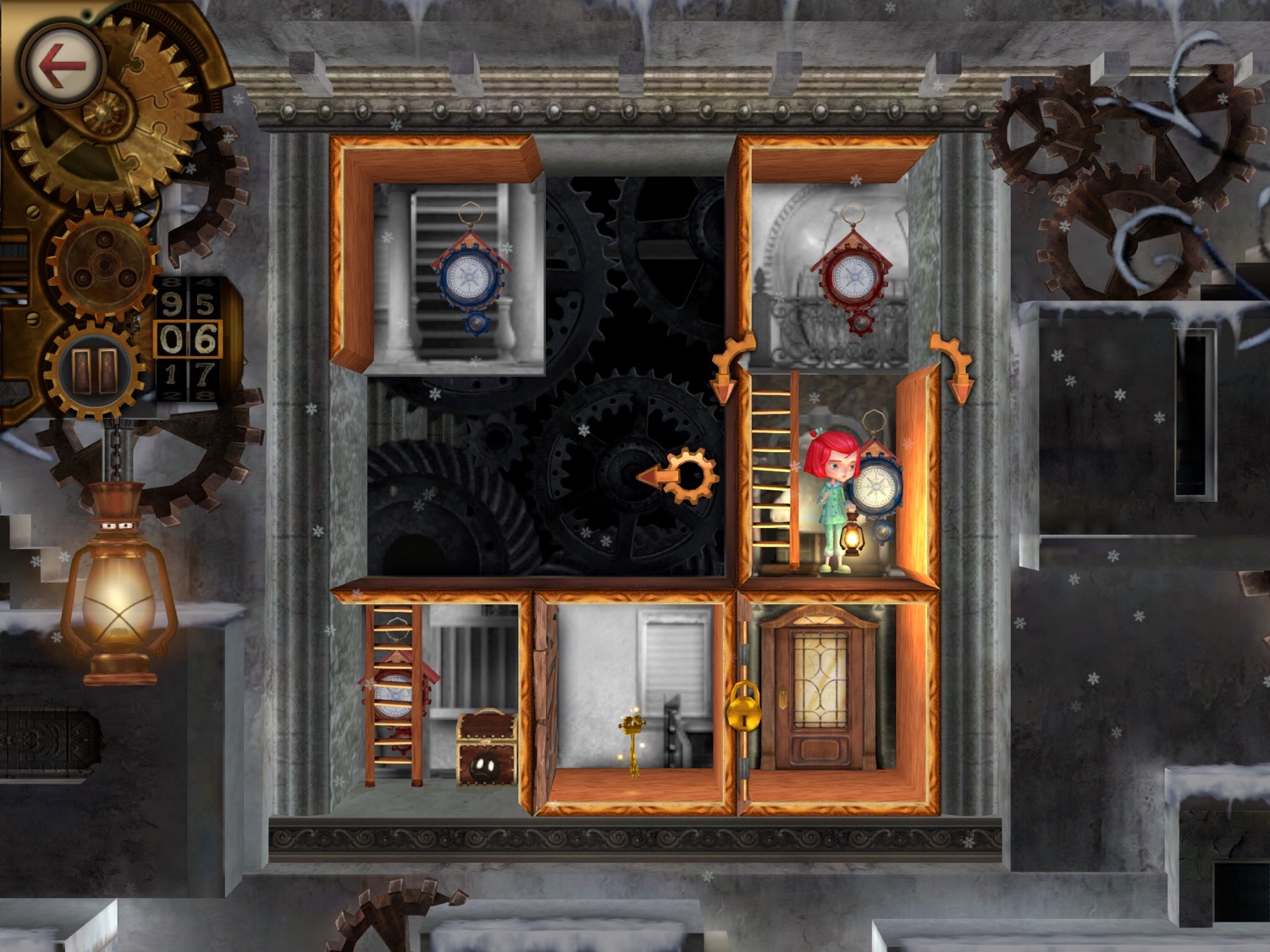 Overall, I’ve been having a great time with ROOMS. I would like to see a few things improved upon to make for a better user experience, namely quality of life issues. But the puzzles themselves are strong enough and interesting enough that I’ve been willing to overlook any issues and enjoy the game as is. If you’re a puzzle fan and don’t mind the bit of time wasted between restarts and some other small niggles, ROOMS: The Toymaker’s Mansion should offer you hours of tile-sliding fun. And if you don’t think you like sliding tile puzzles, take it from me that this game should convince you otherwise. I normally groan when I see a tile-sliding puzzle in a point-and-click adventure, but ROOMS shakes up the genre and breathes life into something that’s grown stale. If you have patience with the game and take your time with it, you’ll find that it can be quite a rewarding experience. So download ROOMS here and see if you can make your way through the Toymaker’s Mansion.

Bring You Home: Levels 31 – 48 Walkthrough Guide and Solutions (With All Pictures)