What Remains of Edith Finch
By: Giant Sparrow / Annapurna Interactive

Giant Sparrow’s What Remains of Edith Finch released on PC and consoles back in 2017, and since then I’d been holding out, hoping it would one day come to mobile devices. Unfortunately, that day has not come, but the next-best thing happened — it was ported over to the Nintendo Switch. As I personally don’t have a great PC setup, the Switch is a much better experience for me, so I was excited to finally be able to play the game. I also managed to avoid knowing anything about it other than that it’s a narrative-based walking simulator with light puzzle elements. All I knew is that everyone was praising it and it sounded like just my kind of quirky game. I somehow even avoided reading the description on the developer’s website or watching the gameplay trailer, so I came to it completely blind. And I do think that’s the best way to experience Edith Finch. So I’m going to say right now — just go and play it on whatever platform you can. It’s clever, chilling, humorous, utterly unique and altogether perfectly polished. But if you still need more to convince you, I’ll try to keep spoilers at a minimum. I know that sounds silly for a three-year-old game, but if you managed to avoid knowing anything about it till now, I don’t want to be the one who ruins it for you.

Edith Finch begins with you walking through a forest to make your way to the old Finch house that has seemingly been abandoned. It might feel like a walking simulator, similar to that of Gone Home. I was already impressed from the start with Valerie Rose Lohman’s voice acting as the titular Edith Finch, as well as the subtitles that are scrawled out in front of you like they’re part of the scenery, then burst and dissolve as you walk through them. As Edith talks more about the house and her family, it’s clear that something’s off here. She mentions her brother Milton’s disappearance and her brother Lewis’ funeral, and how the house made her uncomfortable as a child. There’s also the question of why she ever left to begin with. 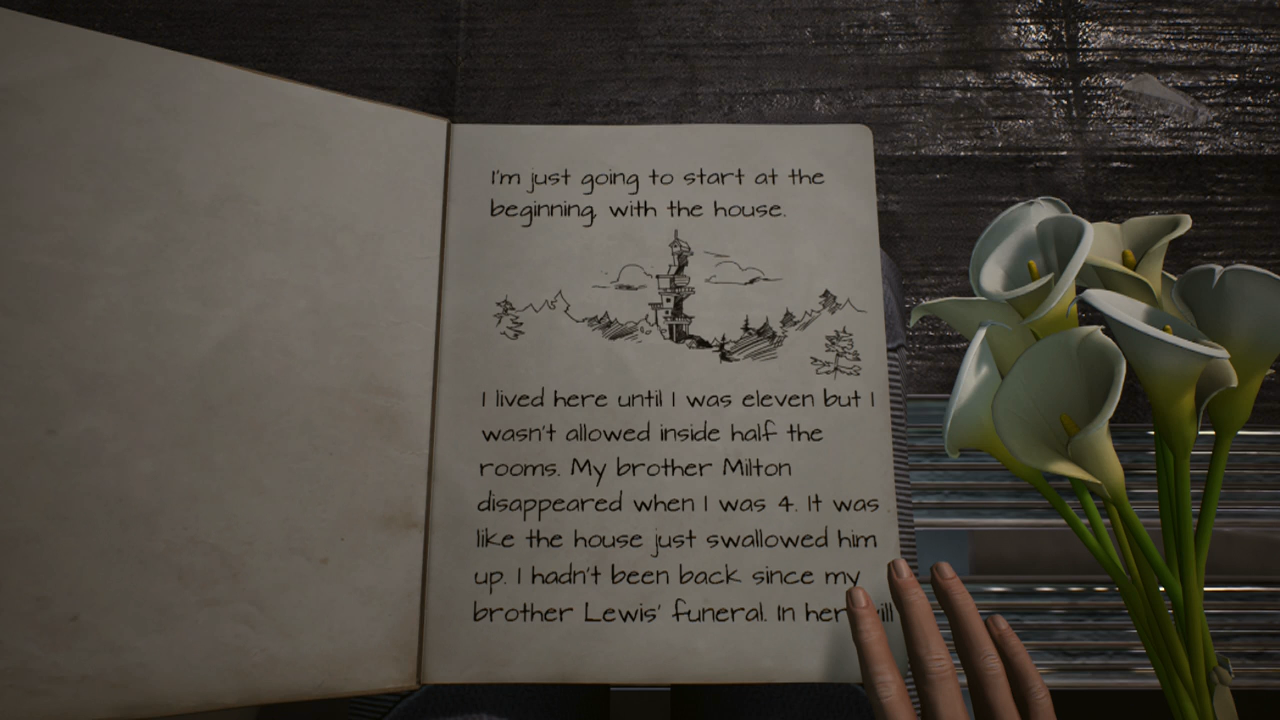 As we approach the home, things still appear pretty normal, especially when entering through the garage. Like in Gone Home, this house is still full of objects as though it’s being lived in, but there’s no one around. The bedroom doors, and even some of the bedroom walls, have murals that made my own bedroom seem increasingly bland. Some rooms are locked off initially, but through light puzzle solving that includes hidden passageways, you can find ways to access them. The house is much bigger than it seems at first glance. And while you can’t pick up objects and rearrange them like in Gone Home, there’s still a ton of details, not least the endless shelves of books that all seem to have individual titles. 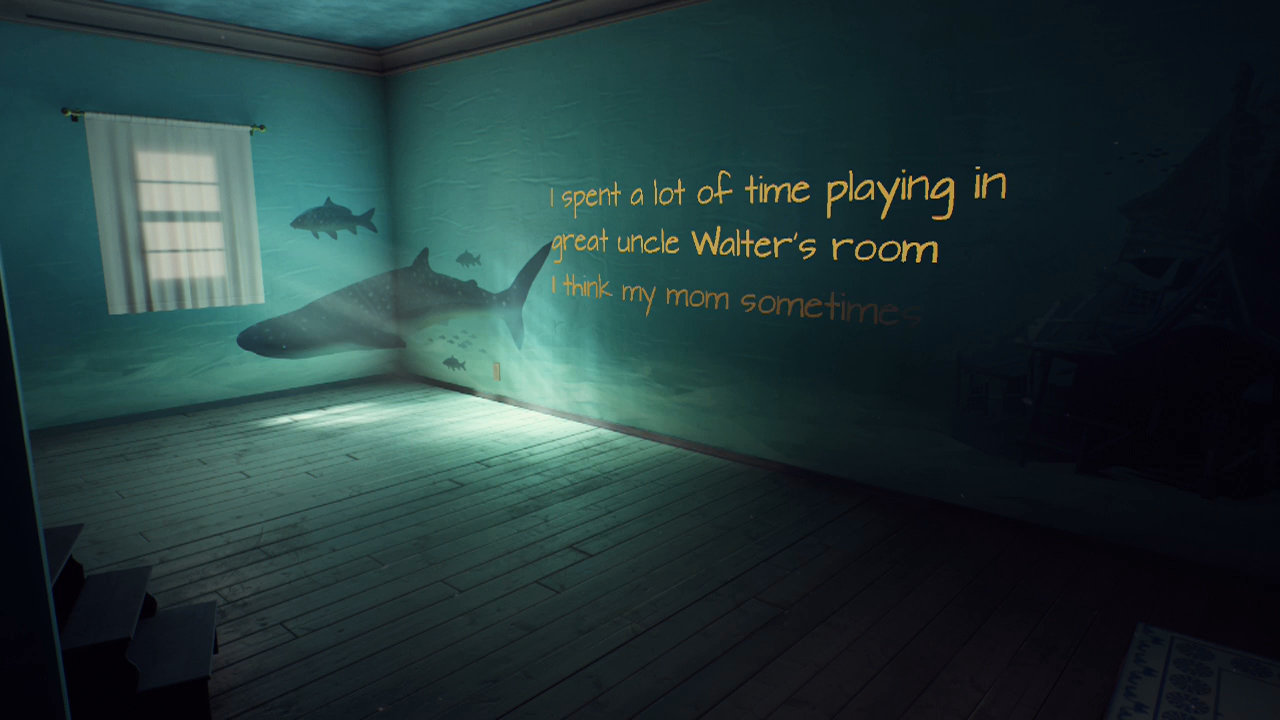 This is primarily a narrative game, so the story is front and center. As you explore the Finch house, you’ll occasionally see little white dots hovering near things. Once you get close enough, you can interact with them. This might mean accessing a small detail about an object, such as a painting. That’s also how you open doors and windows that you can climb through. But the most important interactions you’ll encounter are the objects that tell a story about each individual Finch. These are often in the form of a book or journal, but the story itself is told through a first-person interactive vignette. Each one is very different, both in visual design and mechanics, and — this is the point to stop reading if you really know nothing and want to play the game blind — ends in that person’s death. You see, Finch family believed they were cursed, and considering their string of bad luck, they might not have been wrong.

When I first started the game, I was embarrassed by how long it took me simply to open Edith’s journal. I was pressing every button and nothing worked — until I finally thought to try a shoulder button. It seemed odd at first, but I quickly moved on and was able to appreciate how innovative yet intuitive the controls are. They reminded me a bit of Fireproof’s The Room series, as you use the joystick to rotate a crank, open a book, lift up a window, and so many other interactions, instead of just pressing a single button. They also make each story feel like a puzzle, as you mess around and figure out how the controls work for each. For instance, in one you need to figure out how to focus a camera before snapping photos. This isn’t a game meant to challenge you and have you stuck for hours, but these small details make the stories feel more interactive and more memorable than if they played out like a movie or didn’t require any thought whatsoever. One vignette even has you using two joysticks at once to control different parts of the screen. 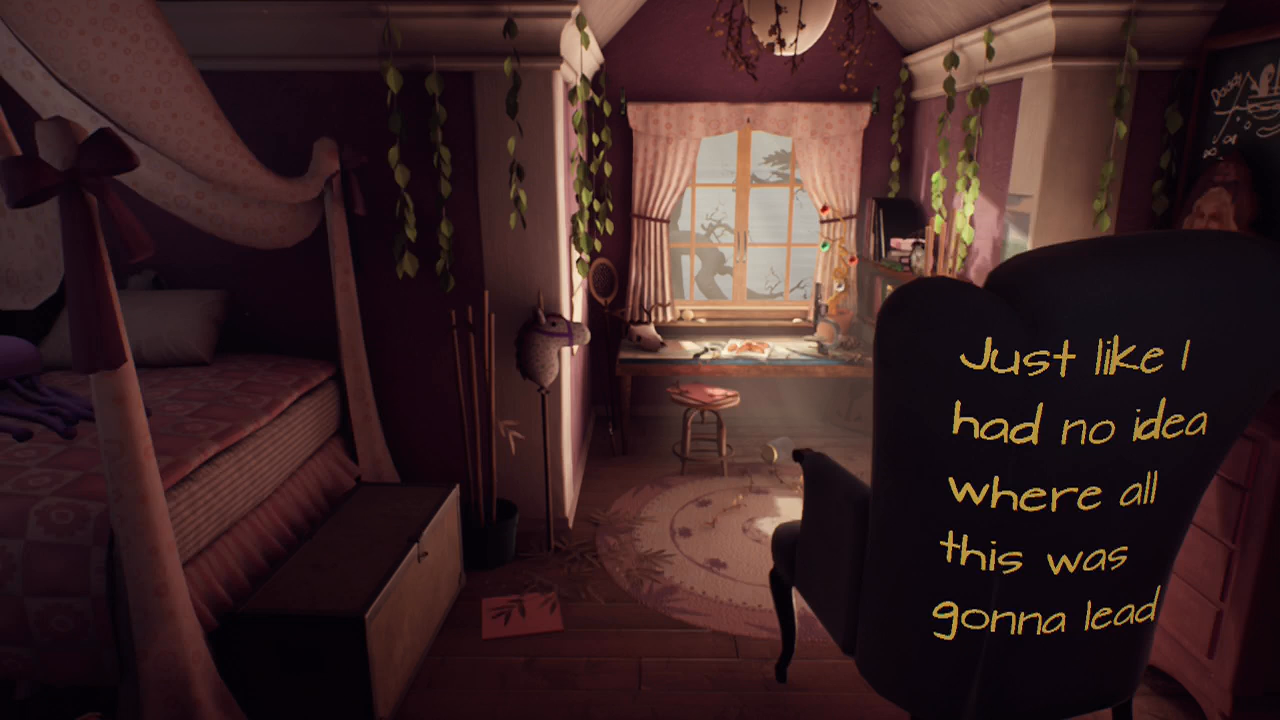 It took me about about 3 hours to complete the game. I probably could have done so in one sitting — that’s how engrossed I was — but I wanted to savor it, so I limited my playtime to an hour a day. You could play in shorter sessions, as each story is self-contained, but good luck tearing yourself away after only twenty minutes! The game is also pretty linear, as the narration pushes you along in the right direction, even when you have room to explore. There was only one point where I missed a path and wasted a bit of time wondering where to go next. But in hindsight, I feel silly for overlooking it. I also missed one story that was somewhat hidden, but thankfully there’s an easy way to access it once you complete the game. As you unlock each story, that family member’s portrait is drawn onto a family tree in Edith’s journal. At the end, you can then select any one of them to replay. And to my surprise and delight, it let me select Calvin’s, the one I’d missed. I was grateful that I didn’t have to go hunting for it, though I do think I want to replay the game entirely, since there’s a lot to take in.

Overall, the game feels great on a Switch. I personally prefer a controller over a keyboard for first-person games, so it was a no-brainer for me. And while the game can certainly be played in handheld mode, I highly recommend docking it to a nice big TV and either turning the volume up or using headphones. The voice acting is all top-notch, as is the music, and it’s a much more immersive experience if you fully embrace its audio. Even though a TV is the best way to play it, I would gladly revisit the game on my iPad if it ever makes it there, simply to see how they adapt the controls. I think a touchscreen would offer the developers some new opportunities to be creative in ways that a controller can’t. 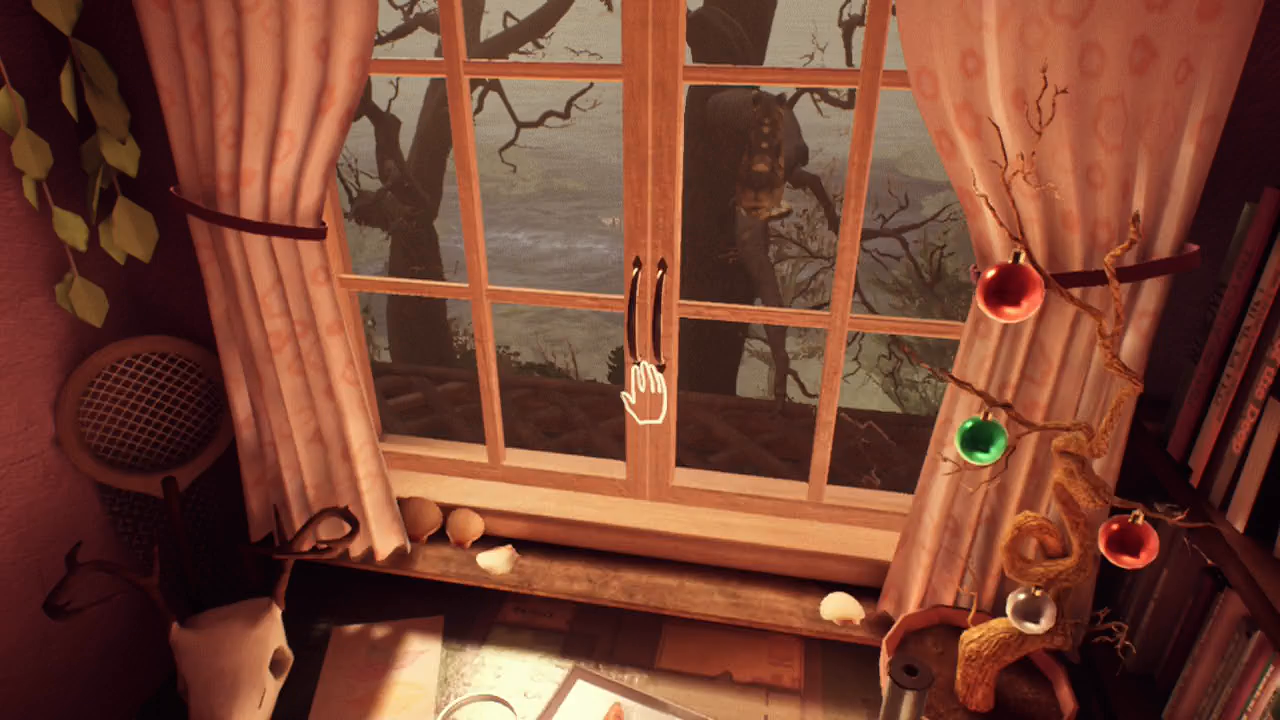 Even though I finished What Remains of Edith Finch several days ago, I can’t stop thinking about it. Like Her Story, it’s the kind of game you want to replay, possibly several times, then discuss all the little details with other fans. I wish I had played it back when it originally released so there’d be more people reacting to it and wanting to talk about it. But at least I can google my heart out and see what kind of theories are already out there. I also wish I could have recorded my videos with a mic so you could have heard my reactions while playing. In short, Edith Finch is a must-play for fans of narrative games, explorative games, or just unique experiences that burrow into your brain and won’t leave. As much as I would love to see it on iOS one day, don’t wait for that possibility if you have a way to play it right now. It’s unlike anything else and absolutely worth both your time and money. So go grab it here and find out what happened to the Finch family. 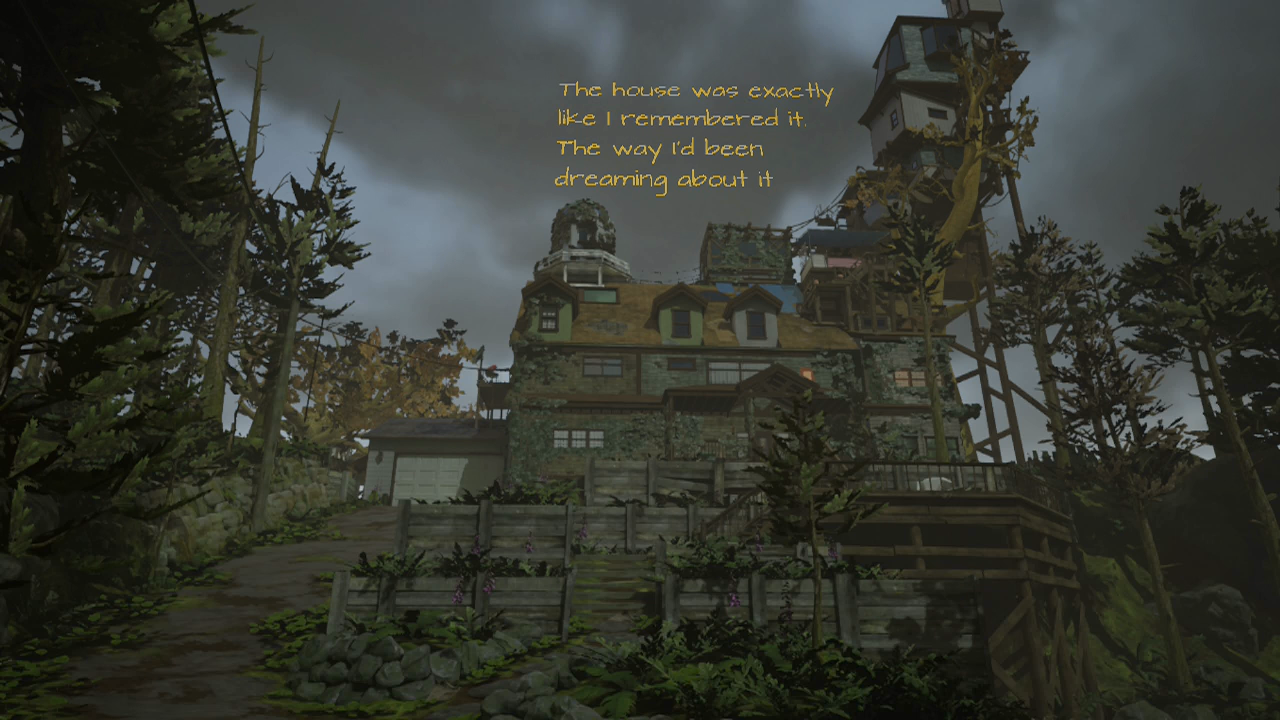