To be quite frank, when I saw the first previews of Alto’s Adventure, I was disappointed to hear that it’s an endless runner. The App Store is so oversaturated with runners and I don’t really find them particularly fun. They’re usually too frustrating and repetitive for me to enjoy. Still, those visuals grabbed me and I had to try the game.

The art was inspired by games such as Monument Valley and Journey, but Alto has a personality of its own. It’s an endless snowboarding game with style. There is so much attention to detail here. As you play, the sun will rise and set. At night, the coins glow brighter and your character is just a silhouette. The weather changes from calm and clear to snow, rain, or even thunder and lightning. As you pass through a forest, birds will fly off the trees. The llamas’ ears bounce as they run down the mountain. Even Alto’s animations when he jumps mimic real snowboarding. He pulls his legs in as he jumps up, extending them again while in the air. You will likely take a few falls just being distracted by all the beauty around you! 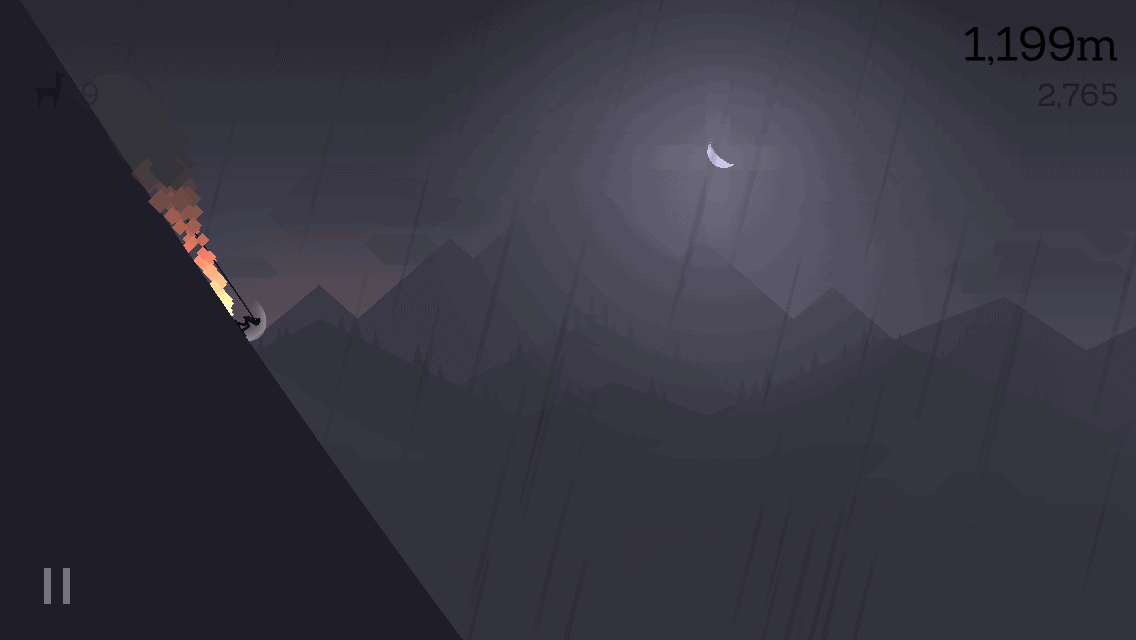 Now that I got that out of the way, let’s talk a bit about the controls. They’re simple to use but difficult to master. Alto’s Adventure was designed specifically for touchscreens and it shows. It’s played in landscape mode, but is primarily a one-touch game that can be played mostly with one hand. Your character automatically snowboards down the mountain. A light tap on the screen makes him jump up, say to avoid small obstacles like rocks. Keeping your finger on the screen will cause him to start flipping backwards. If there’s enough room to make a full rotation before he lands, you can make a complete backflip. But if you time the jump wrong or didn’t have enough room for it, he could end up landing on his face, and then it’s game over. 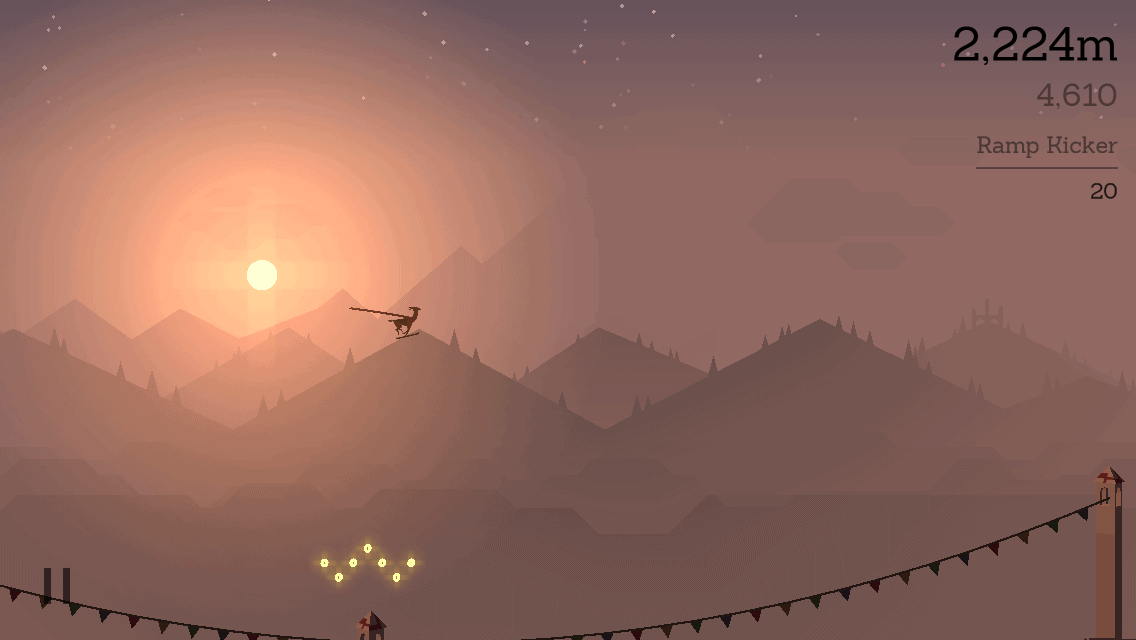 There are ramps that are used as jumping-off points for chasms and these took me a bit of time to get used to. But once you have it down, doing successful backflips over wide chasms is one of the most rewarding aspects of the game. 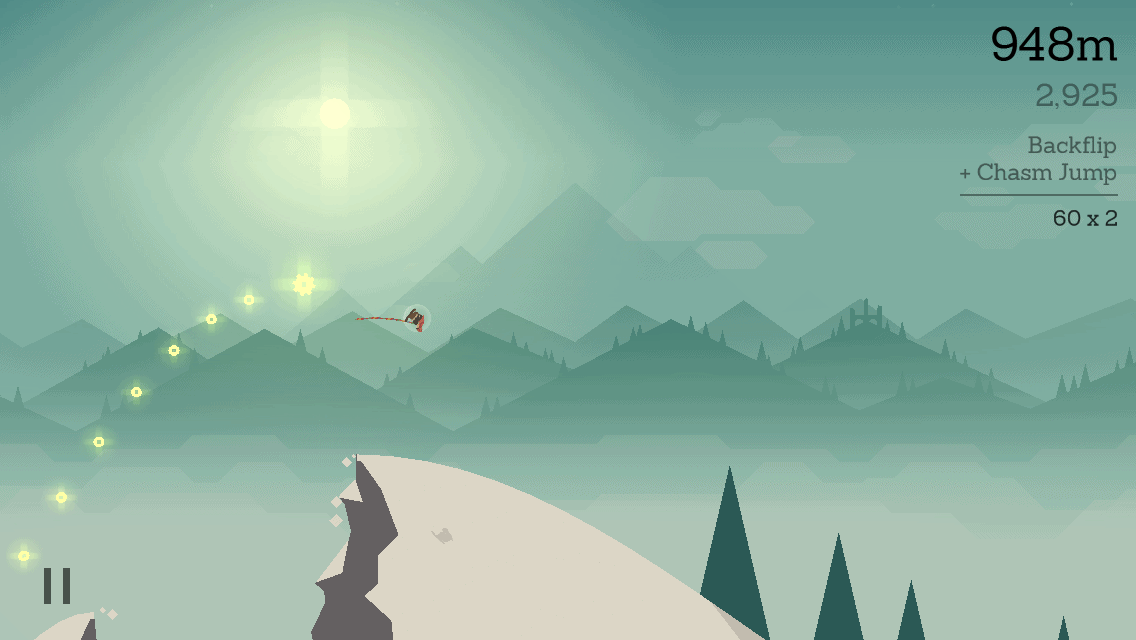 Along the way, you can also do some grinds, bounce off rocks, and pick up some power-ups that help you out. For instance, a magnet will cause you to temporarily attract coins. If you pick up a hover feather, your board will float over obstacles for a short time. These power-ups can be upgraded in the Workshop with the coins you’ve collected. You can also buy the wing suit there, which adds a whole other element to the game, allowing you to briefly fly! It’s pretty easy to accumulate coins, as you’ll pick up a bunch at the very beginning of each game, before you even need to jump over any obstacles. Coins also improve your score, so they still have a purpose once you get all upgrades. You also earn points for collecting llamas and performing tricks and stunts. You won’t be able to pick up everything, so you often have to make a choice, say, between a roof grind or a llama. 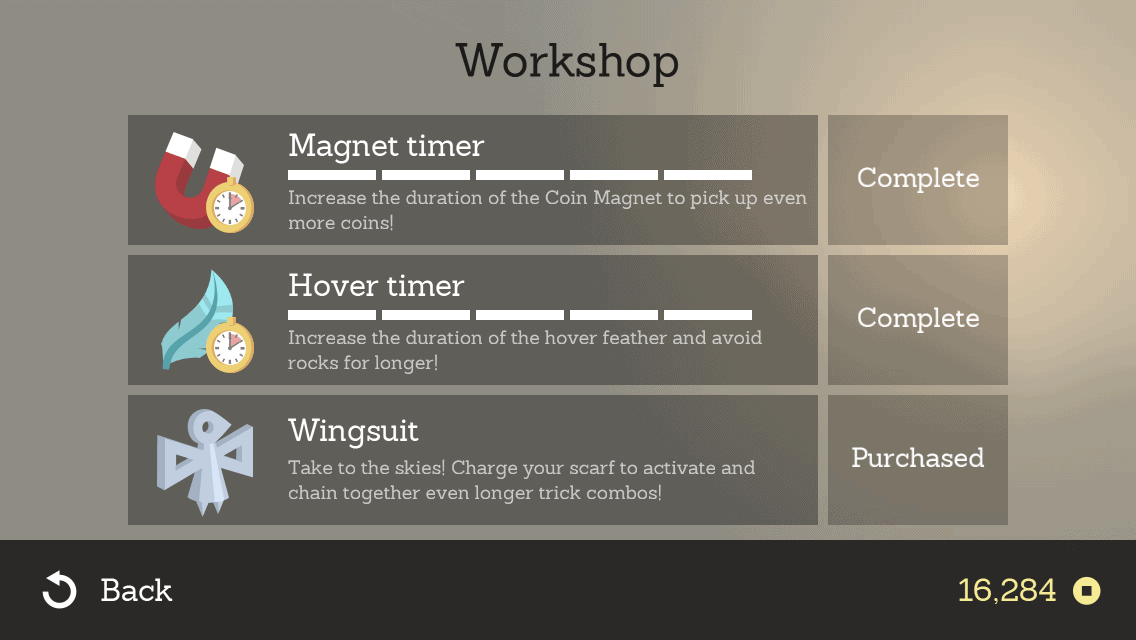 Another interesting element is the elderly man you’ll encounter sleeping by a campfire. You need to jump over him, at which point he will start chasing you. He’s surprisingly fast, and the only way to get rid of him is to outrun him to a chasm, as he can’t cross them. If he catches you before then, it’s game over. 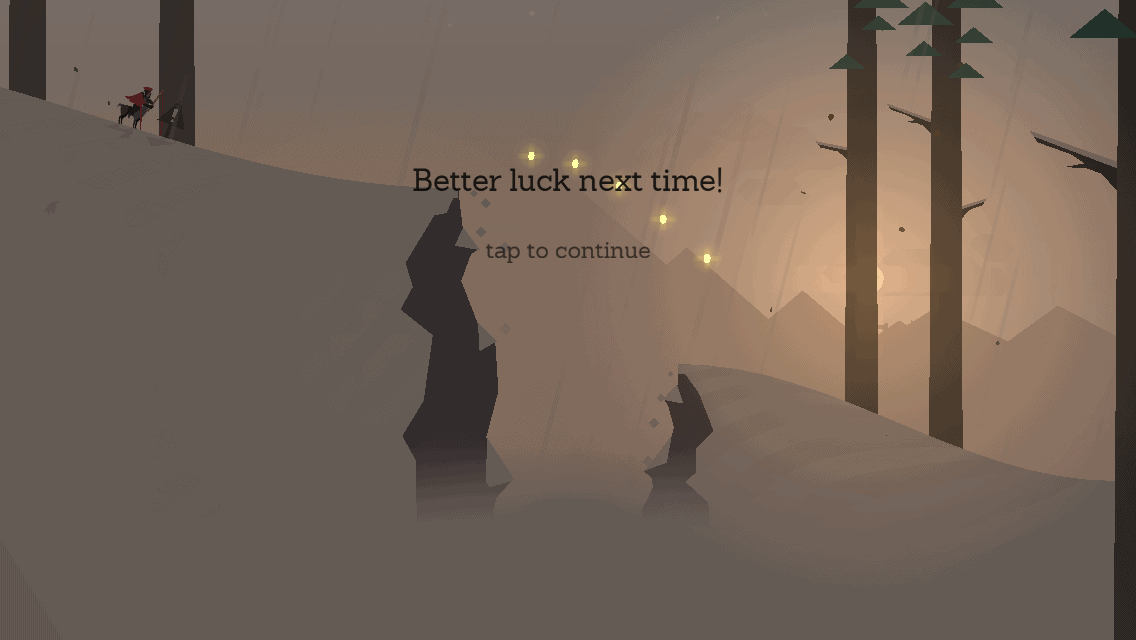 There was a bit of a learning curve for me, involving some frustrating moments where I thought I simply wouldn’t get it. I still have room to improve, but my persistence has paid off and I’m thoroughly addicted to the game now. Once you get a feel for it, you want to get better, go longer, do more impressive backflips. You start wanting to not only survive, but try and show off. Sometimes my efforts fail, like when an attempt to do two backflips instead of just one lands me face-first into the mountain. But you just get back up, dust yourself off and give it another go. You can watch this video along with some others I made to see the game in action:

While the game is an endless runner and you can play it simply to beat your high scores, there’s much more to it than that. There are 180 goals over 60 levels. Each level gives you three goals that you need to complete to move on to the next. Every ten levels you unlock a new character with their own unique attributes and abilities, such as faster flips or a double-jump. There are five characters to unlock besides Alto, and they each add a new element to the game, so you’ll definitely want to unlock them all. 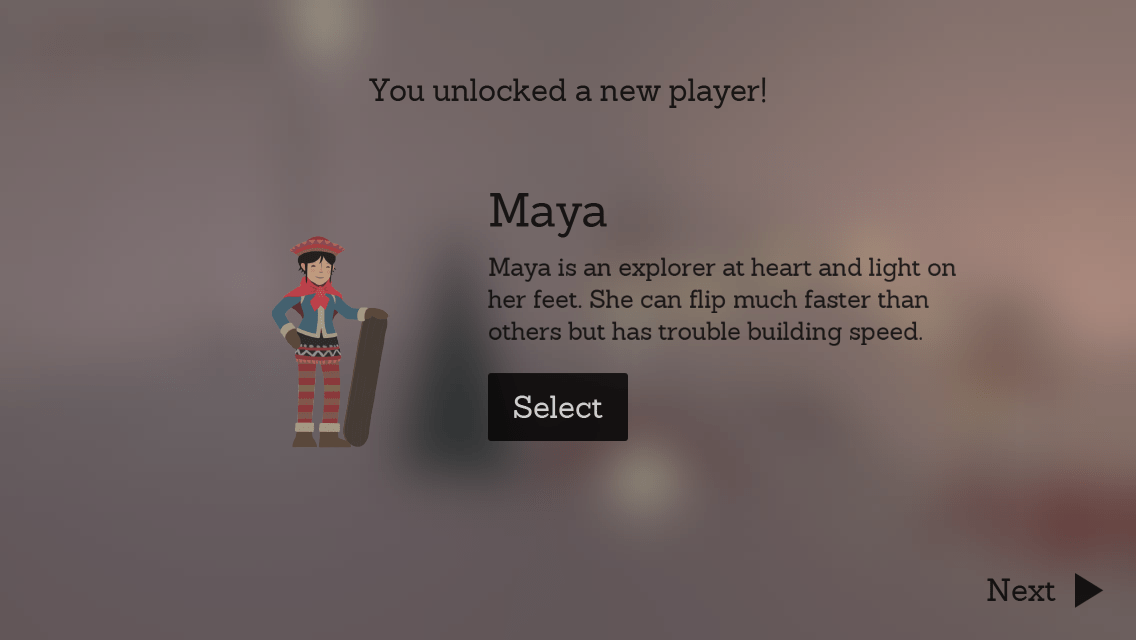 The final unlockable character is the easiest to play, as he does backflips in a fraction of the time of other characters, and he even has an extra life in certain situations. Since you need to prove your skills before you get to play him, it’s not just an easy way out. And since there’s no in-app purchases (IAPs) in the game, everyone has to earn him the same way. And believe me, it’s worth it. 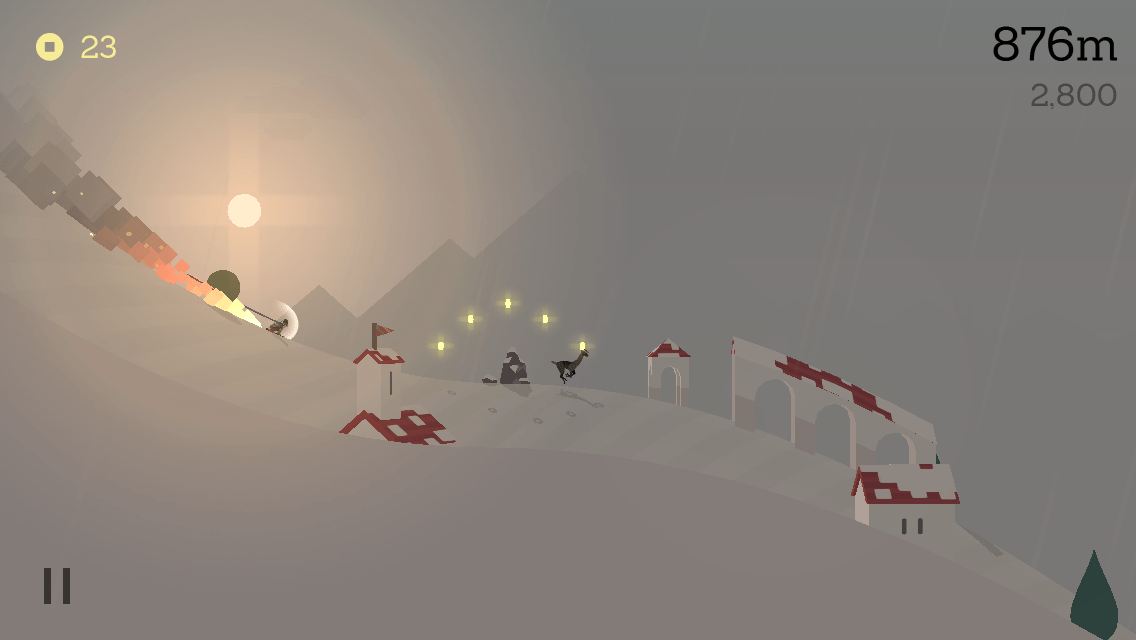 The goals give the game that “one more try” element, because it’s a bit more than just beating your high scores or climbing the leaderboard. Achieving the goals and unlocking new players gives you something smaller to work on while you’re trying to improve your skills and get higher scores. Plus, you can play as a llama! 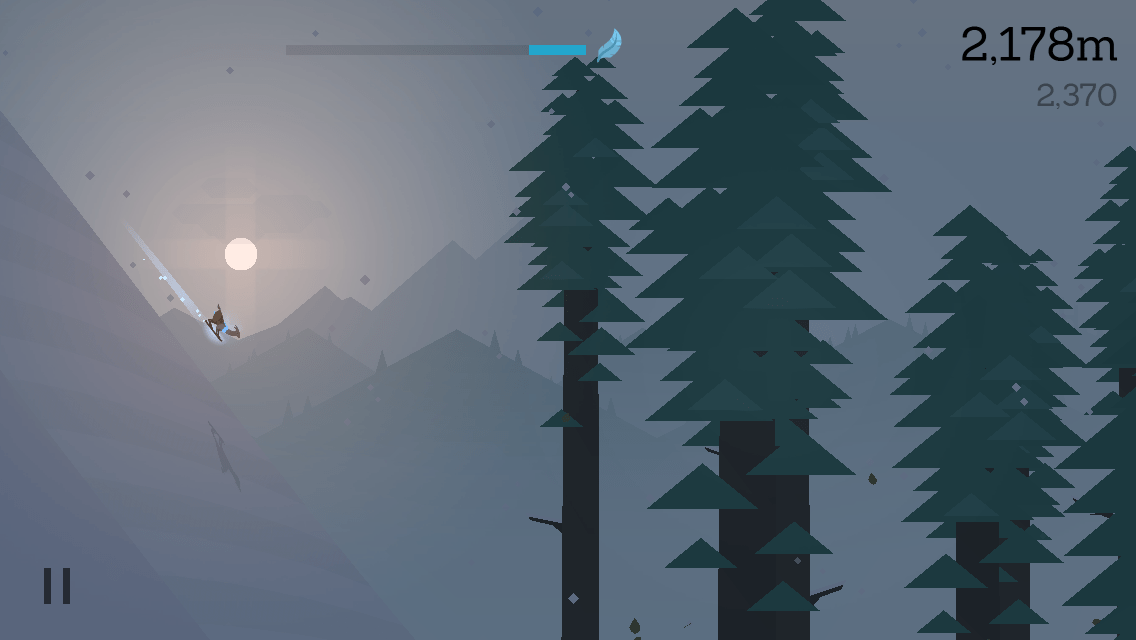 I do wish the goals were more of a checklist instead of three specific goals at a time. You might achieve certain ones before they’re given to you, but they won’t count for later. If you’re stuck on a specific goal, you won’t be able to get to the next level, even though the next level may be much easier for you. For instance, one goal is to do five backflips in a single run, which can be pretty challenging early on. I think a checklist of goals to achieve in any order would have felt a lot less frustrating and provided a more enjoyable experience, at least for me. Or, perhaps, just allowing a little wiggle room by unlocking a new goal every time you clear one, instead of being forced to complete three specific ones before continuing. 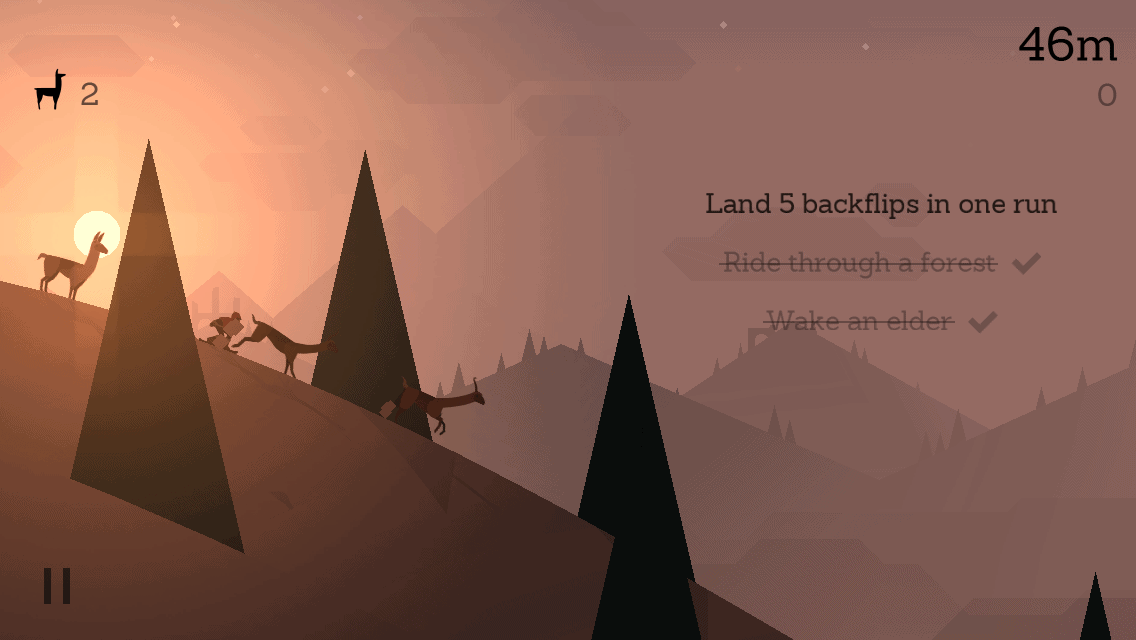 They could have so easily made this a “freemium” game with IAPs to unlock new characters, abilities, buy more coins, perhaps even continues or extra lives. The fact that they didn’t is one of the top reasons everyone should go buy this game and support the developers. Show them that creating a premium game with a (more than) fair price can pay off, and developers don’t need to milk their players constantly. The fact that there are no IAPs also means that performance in based on skill, not how deep your pockets are. It makes it that much more rewarding to practice and try to climb the leaderboards. 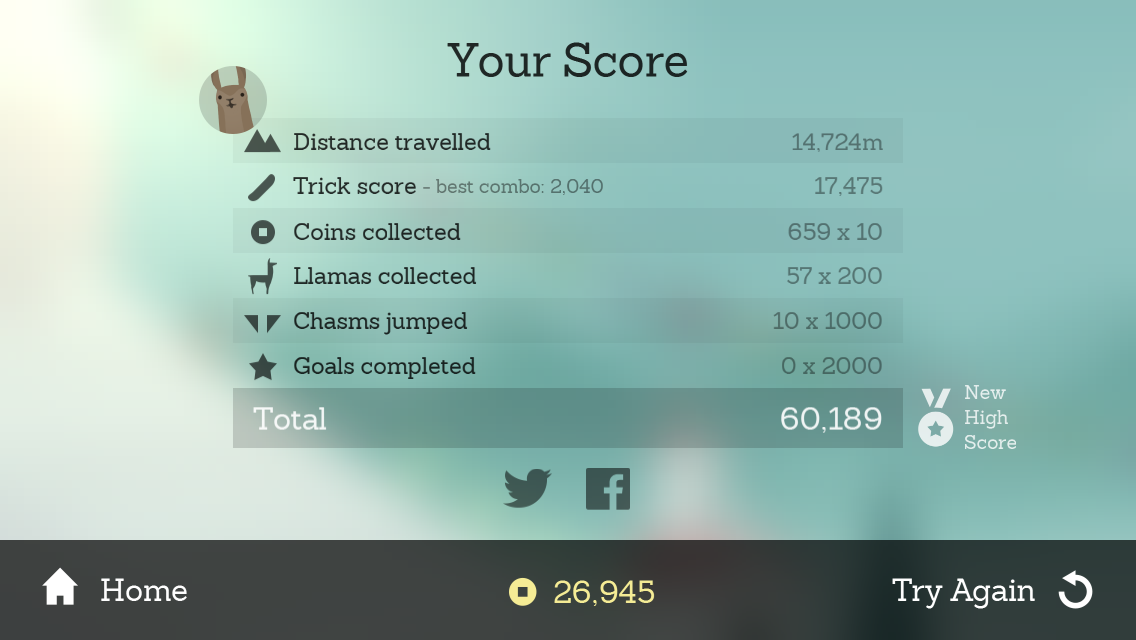 If that’s not enough to convince you, just look at those graphics and animations! Honestly, even if you don’t enjoy the gameplay and just buy it to experience the visuals first-hand, it’s still worth getting. You can download Alto’s Adventure here. And remember: Look out for rocks! [DKB url=”https://www.appunwrapper.com/Alto” text=”Download” title=”” type=”” style=”” color=”green” width=”” opennewwindow=”” nofollow=””]

Already playing the game but need help? Check out this guide I’m working on.