Linn: Path of Orchards is a game I wish I was better at playing. I love the art style that’s reminiscent of classics like Monument Valley and Alto’s Adventure, from the color palette to the weather effects. It has a calm and relaxing soundtrack that makes me want to keep playing even when I’m frustrated. I’m also a big fan of games that have unique mechanics and take advantage of iOS’ gesture controls instead of on-screen buttons. But as pretty and inviting as it seems, it can be quite a punishing game if you don’t get a firm handle on the controls. I wasn’t sure it would happen, but I’m glad I was still able to complete the game with my level of skill, even if I couldn’t achieve even half the objectives.

In Linn, you play as Aban, a guardian of nature. There isn’t much of a story, but as you complete chapters you’ll see the tree’s lanterns light up, and there’s a brief ending when all four are full. Each level has floating platforms that spin around in different patterns. There are shards to collect and a doorway to reach in order to complete the level. Aban runs automatically in the direction she’s facing and, to change her direction, you swipe left or right. Besides that, you swipe up to jump and again to double jump. When she’s in the air, you can also swipe in the direction she’s facing for a quick dash. There are a few things to get the hang of, and it took me a while to fully understand the mechanics. For instance, you can only jump twice and dash once before you touch ground again. And, of course, if you fall through the air and don’t land on a platform, you have to restart the level. 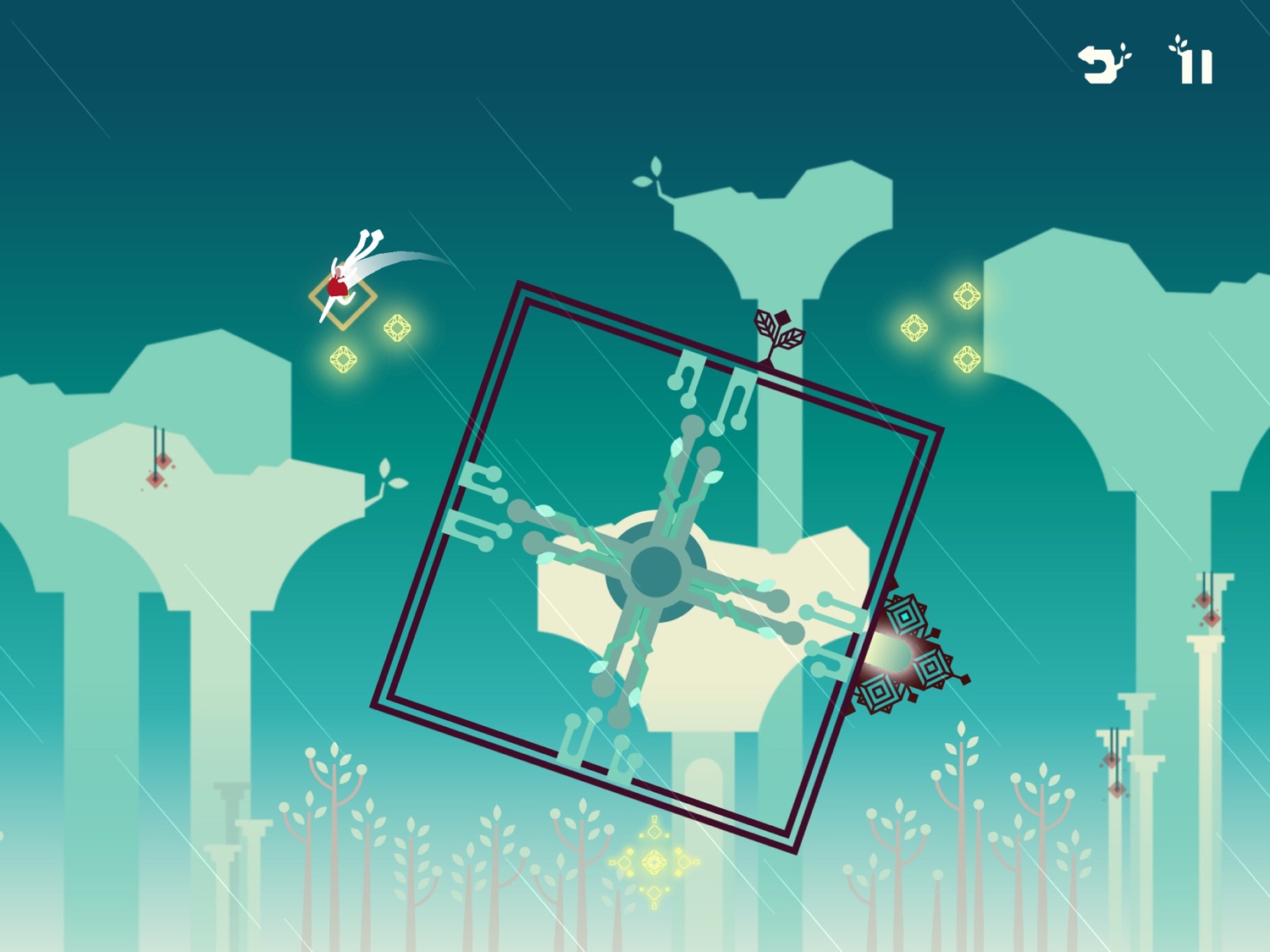 There are four chapters of fourteen levels each, with three objectives for each. The objectives always include an elder shard that’s difficult to reach, while the others might consist of collecting all the regular shards or getting to the doorway in a certain number of moves. Later levels also have either ground time or air time, forcing you to take a little extra risk before making your way to the exit. Levels have to be played in order, unfortunately, so if you can’t get past one, you won’t be able to try the rest. I found the difficulty curve a bit scattered at times and occasionally wished I could skip a level that was giving me a hard time. But I managed to get through all of them, even if I did so sloppily. Thankfully, the requirements to unlock each chapter aren’t too strict, as you only need to complete the previous one and collect a fairly small number of objectives. So as long as you have some skill and persistence, I think you should be able to get through the whole game. And then the true masochists can go after all the elder shards and other objectives for an extra challenge. 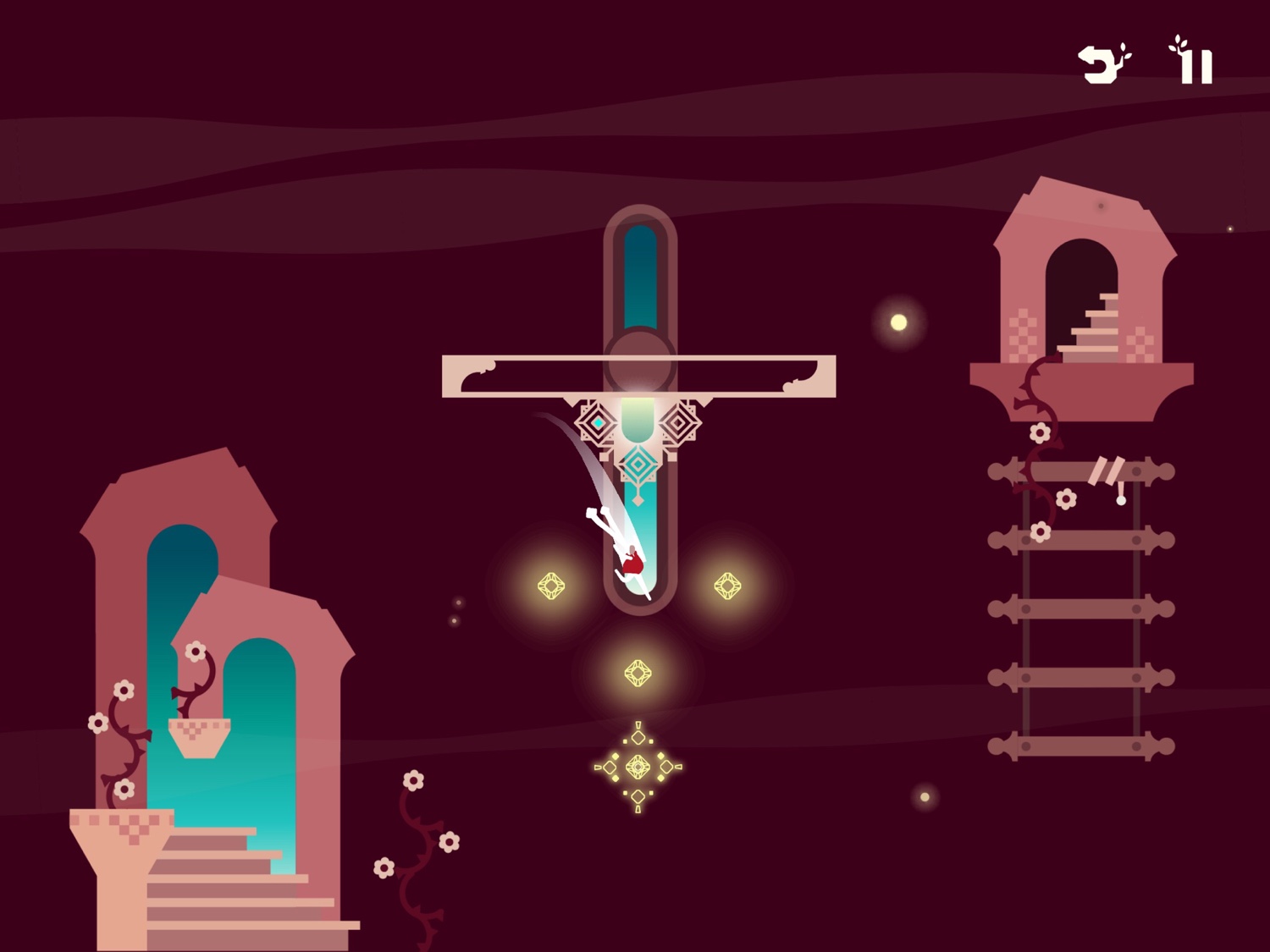 As you progress, you’ll encounter new challenges like portals or glowing flowers you have to pass through in order to unlock the exit. The environments also get bigger and more complex, so that one small mistake could mean starting over. This is a puzzle platformer, so usually there’s a specific solution for each level, but it’s also possible to solve them by accident. I was surprised a few times when I picked up an elder shard without even trying, while other times I had an idea what I needed to do but kept failing to achieve it. This is a game that requires both out-of-the-box thinking and dexterity. As a puzzle fan without the best reflexes, I often got frustrated that I could see the solution but couldn’t pull it off. So those who are normally skilled at platformers will likely have a better time with it. 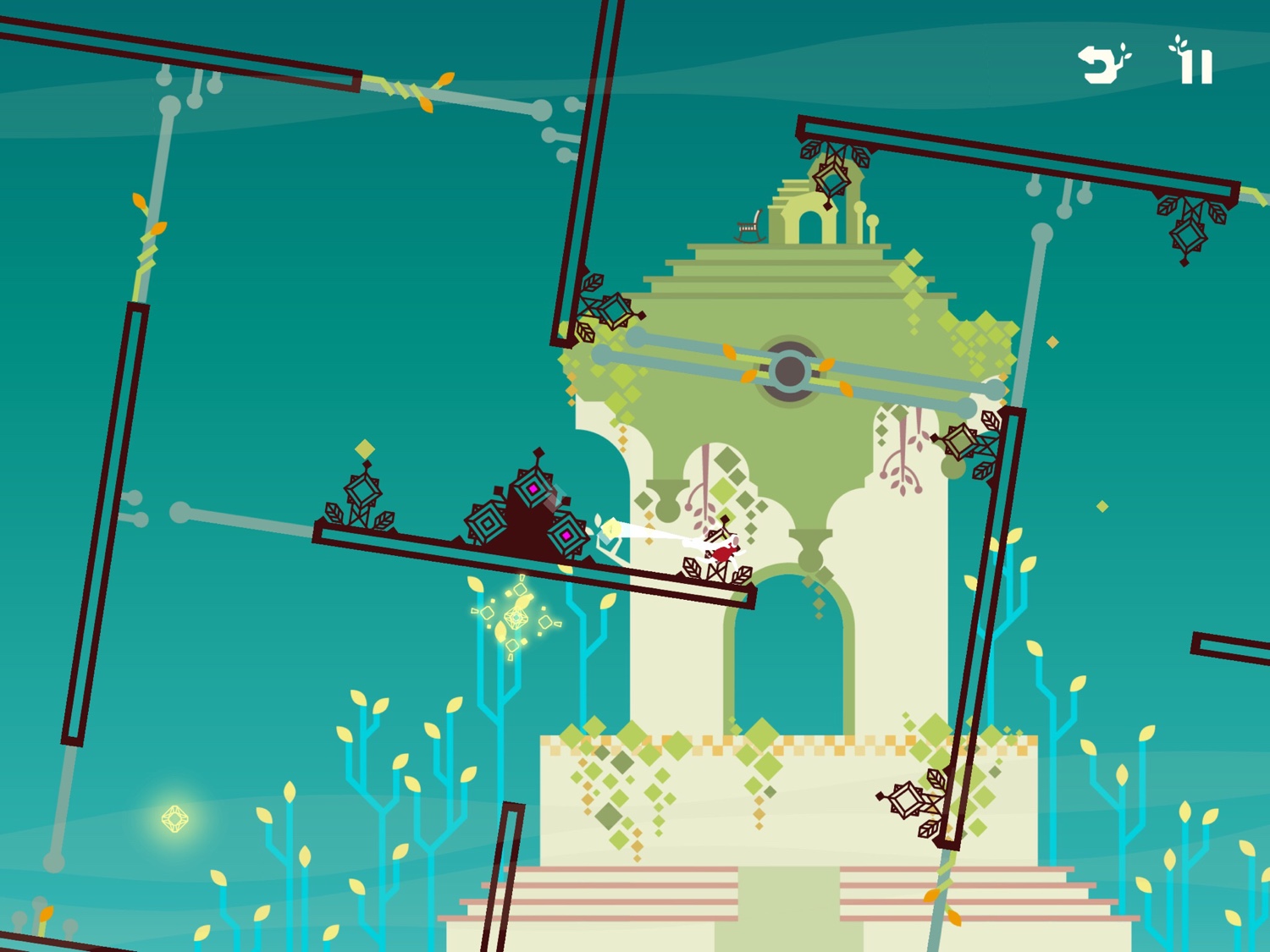 One thing that often got in my way was that when you die or restart a level, instead of instantly resetting the scene and waiting for you to start again, it rotates the platforms back to their original position and then everything starts moving again automatically. I didn’t realize until I had already completed the game, that I could skip the spinning by tapping the screen in middle of it. That didn’t help me get prepared for Aban to start running again, but it did help minimize the motion sickness I was getting from all the spinning. I do wish the game would reset and wait for me to tap to get everything going again, though, just like it does when you first enter a level. Sometimes I just wanted to stop and think of what I should do, but there was no time for that because Aban was already moving. Besides the tricky platforming itself, that was the biggest issue for me, as it led to far more frustration than necessary. I’m hoping it can be fixed in the future, as I’d be much more likely to go back for extra objectives with that change.

Linn: Path of Orchards has a lot of unique ideas and is visually pleasing with stylish artwork nice enough to hang on a wall, but it’s not a game that’s for everyone. Unlike Monument Valley, mastering it will take skill, patience and persistence. Later levels are difficult even if you skip the objectives. So while I wish I could recommend this gorgeous game to everyone, it’s still a platformer, and folks who primarily play relaxed puzzle games will likely get frustrated and quit. Still, it’s fairly cheap, so if you’re even mildly curious about it, it might be worth picking up, even if you don’t play through the whole thing. It’s clear a lot of love went into the game, and it’s nice to see developers innovating with new ideas instead of just making another battle royale or free-to-play match-three. So if you’re willing to give Linn: Path of Orchards a try, download the game here and take it for a spin.

And if you’re already playing and need help, try my guide to avoid making some of the same mistakes I did.