I don’t normally do this, because I like to get much deeper into a game before reviewing it. But in this case, I had so much to say from the short time I spent with Psychoz Interactive’s Forgotten Memories: Alternate Realities, that I’m writing my first impressions now. If my opinion changes or I have more to add, I’ll edit this or write a full review. But I wanted to get this out there for anyone who is trying to decide whether to get the game. I’m also hoping maybe the developer will take some of the feedback to heart and do something about it.

First of all, the positive. The visuals are top-notch, and I love the mannequin theme. They’re genuinely spooky without relying on too much gore. The voice acting is also superb and quite often creepy. Together with the music and sound effects, there’s a lot to like here. However, there are quite a few things that drag the game down.

Right off the bat, I noticed that the subtitles for the script are huge, covering half the screen and messing with the immersion. I can understand maybe on the iPhone if they make the text bigger so it’s more readable, but on my iPad it was far bigger than it needed to be. A setting to reduce the size or shut them off completely would be nice. 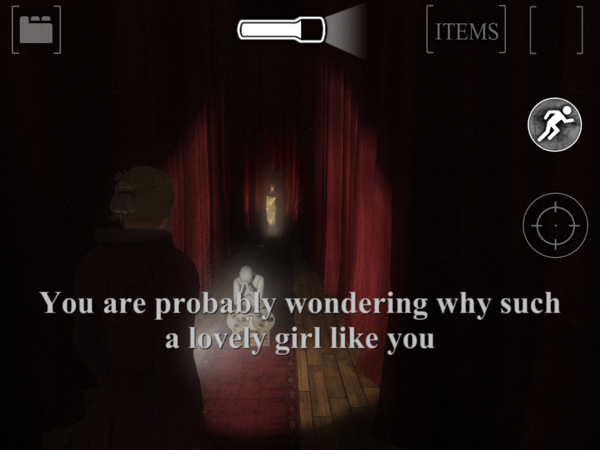 Additionally, the game is in third-person instead of first-person. This isn’t bad in itself, but the character often blocks my view, and sometimes I end up facing her, which doesn’t seem to make much sense for this type of game. This was a strange choice, considering how much effort was put into making the game look good and pushing the limits of iDevices. Why go through all that trouble and not let me see anything? The flashlight is also connected to the camera and it’s hard at times to focus it on things. And while I’m battling with the camera, my flashlight’s battery is running out. You can shut the flashlight to conserve energy until you find a charging station, but then you’ll see even less. I get that it’s supposed to make it creepy and atmospheric, but it also means you’re barely seeing any of the gorgeous surroundings. All of these things together compound to make the game more frustrating than it should be. 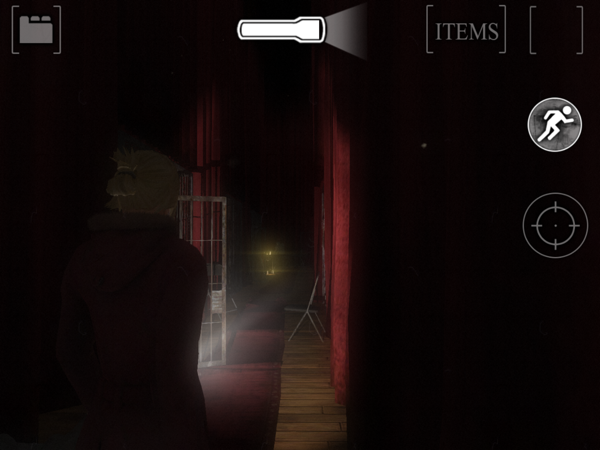 As you walk around, you can interact with some objects. If it’s possible, a little exclamation point will appear. The problem is, you have to be really close to an item to get the exclamation point to show up, and you also have to be at just the right angle. This is a problem for several reasons. First, the game is dark and you have limited flashlight battery. Therefore, the more you examine everything, the faster your battery will die. But if you don’t get close to everything, you could easily miss an item. Not to mention that if you get too close to things, your flashlight doesn’t work properly. I also wasted a lot of time adjusting my position and camera because I would see an exclamation point for a split second and then lose it. Again, this was a waste of my precious light. You’re basically pixel hunting in a game that gives you limited resources in which to do so. Under different circumstances, this would be just a minor nuisance, but with infrequent save points and charging stations, it means you can potentially get stuck in pitch black darkness just because you tried not to miss things. This is what happened to me, as you can see in this gameplay video I took just after the first save point. I stopped the video (and my game) when I couldn’t see where I was going anymore. Basically, the game punishes you for exploring. This makes no sense, when so much effort was put into making it look pretty.

In another frustrating moment, I found something stuck in a drain but didn’t have anything to get it out. Seeing as I barely knew how I got to that room in the first place, I’ve no idea how I would find it again once I have the object in question. There’s no map to refer to if you get disoriented. Had this been a regular point-and-click adventure without the light issues, I would have enjoyed this puzzle aspect. But as is, I just dreaded having to look for the object that I needed.

To make matters worse, the only way to save the game is by finding floppy disks, of which there are a limited number, and then finding a computer to use with the floppy disk. So if you wander around for twenty or thirty minutes and don’t come across a floppy disk and computer, you may end up having to start back at your last save point. Even if you don’t die, the game won’t save your spot. So if you don’t have a lot of time to play (or get stuck on all the issues I did), you may end up replaying the same parts more than once. 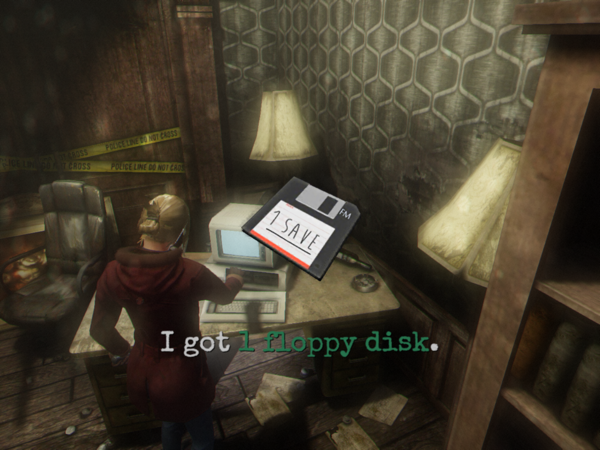 This game has so much potential, but its attempts to be hardcore just make it unnecessarily frustrating for me. I only encountered one enemy so far and I killed it easily. What eventually made me lose my progress was that simple fact that I couldn’t see. My latest session was played during the day on my iPhone, so I will give the game another chance tonight on my iPad to see if things improve. I’ll update my review once I do. But as is, I believe the game needs a lot of work to be user-friendly.

Update: I played a bit on my iPad and for some reason had more trouble with the fighting than I did on my iPhone. So I ended up nearly dying from the first enemy. Besides that, I could see a bit better and made some progress and even found the next save point. But I couldn’t find a med kit, so I died before I had a chance to save. Now I have to start back at the first save point yet again. Even on my iPad at night, the game still has a lot of the same issues with the exclamation points and low battery for the flashlight. And I haven’t found a charging station yet.
Basically, if you do play the game, be prepared to play the same parts over and over until you have the whole layout memorized, since there’s no map. If you pick something up or kill an enemy but don’t save, you’ll have to do it all over again with no map or guide to help you get through it all quickly. You may just want to follow a walkthrough, but that ruins the whole exploration aspect of the game.

My current feeling is that the game is very unforgiving, forcing you to start back at the last save point if anything goes wrong. But the mechanics are not polished enough for the game to expect so much of its players. If it’s going to be so unforgiving, the controls and interface need to be perfect or it feels like you’re failing not because of your own abilities, but the lackluster controls and game mechanics.

An update is supposed to be coming soon with a longer flashlight battery, so I may wait until then to give the game another try. I’m getting tired of replaying the same parts over and over again because I run out of light.

Update: The game has been updated with an easy mode. You can read more about it here.

If you want to give the game a try, you can download it here. Let me know if you encounter the same problems I did or if you love it!

If you’re already playing, you can try my guide for some beginner’s tips.