Riddlord: The Consequence
By: Amrita Studio

I’m just as excited as any puzzle fan to hear of a new game in the style of Fireproof’s The Room series. So when I got my hands on Amrita Studio’s Riddlord: The Consequence, I couldn’t wait to dig in. Things started off great. At first, it seems like it will be just as enjoyable as its inspiration. (NOTE: This article will spoil some puzzles, as it’s the only way I can talk about this game right now.) There’s a table with a few things on it. A knife you can pick up, then use the knife to cut a rope by moving it back and forth as you would a real knife. It was a nice detail.

The next puzzle was tricky and took me a while to solve, but that’s not necessarily a bad thing. You need to slide a piece around a cylindrical maze that’s split in two, with the top half being able to rotate. I finally solved it by looking for the exit and checking where I need to go. That revelation should have come sooner, but I managed and it was a satisfying puzzle. You can see the video I took of it below.

Unfortunately, soon after that is where things started going wrong. The signposts and feedback are not so clear in Riddlord. I had to use hints that are on a timer to find out basic info that should have been given away through playing the game. For instance, I got to a point where I had a board full of tiles. I needed to arrange them like a jigsaw puzzle, but it was hard to tell what should be on an edge. Each tile can also be rotated, making things even more difficult. I spent a lot of time making shapes, but getting frustrated because I had no clue if I was on the right track. There are a lot of round symbols, so finding a starting position to work from seemed nigh impossible.

It wasn’t until I finally used a hint that the game told me that when a tile lights up, it means it’s in the right spot. Sure, that makes sense and I wouldn’t have even needed to be told that if I had seen a tile light up. But I had been rearranging pieces for at least ten minutes and never got one to light. So my next move was to just randomly move tiles around until one of them lit up. Then the puzzle became solvable. But I could have spent an eternity matching up different symbols with no idea that there’s even any feedback at all from the game. This could have so easily been solved by having one tile lit up from the start. Would that have been too easy? I don’t know, but the way it is currently made it seem like it was trying too hard to trick me. And I still have no idea what the red numbers were for. 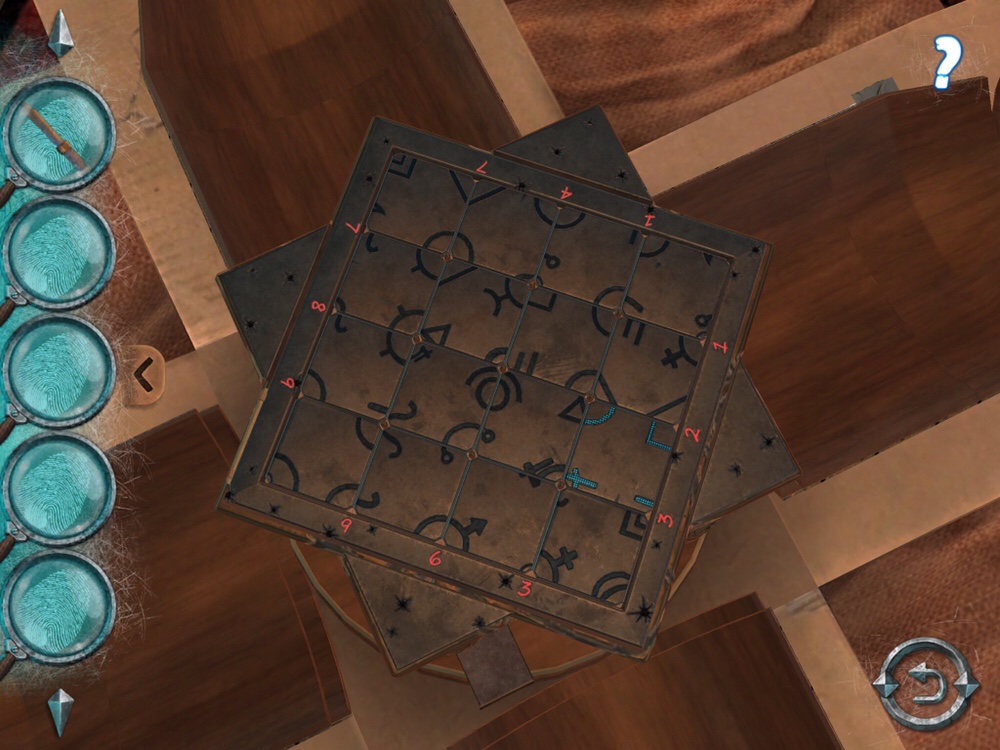 I got past that, only to be met with a frustrating 2×2 Rubik’s Cube with a blue pattern on one half and a red pattern on the other half. Through some messing around with it, I discovered that this too lights up when a piece is in the right position. That’s important, because it’s a very abstract design. Unfortunately, the lighting aspect was bugged and didn’t always work, making it hard to tell when I was on the right track. I’d even have a piece light up for a while and then later no longer light up, even though it was in the same exact position as earlier. It was doing my head in, as I find Rubik’s Cubes frustrating enough when I can tell how it’s supposed to look in the end. Being unsure of how the design should look made me want to throw my new iPad against the wall. 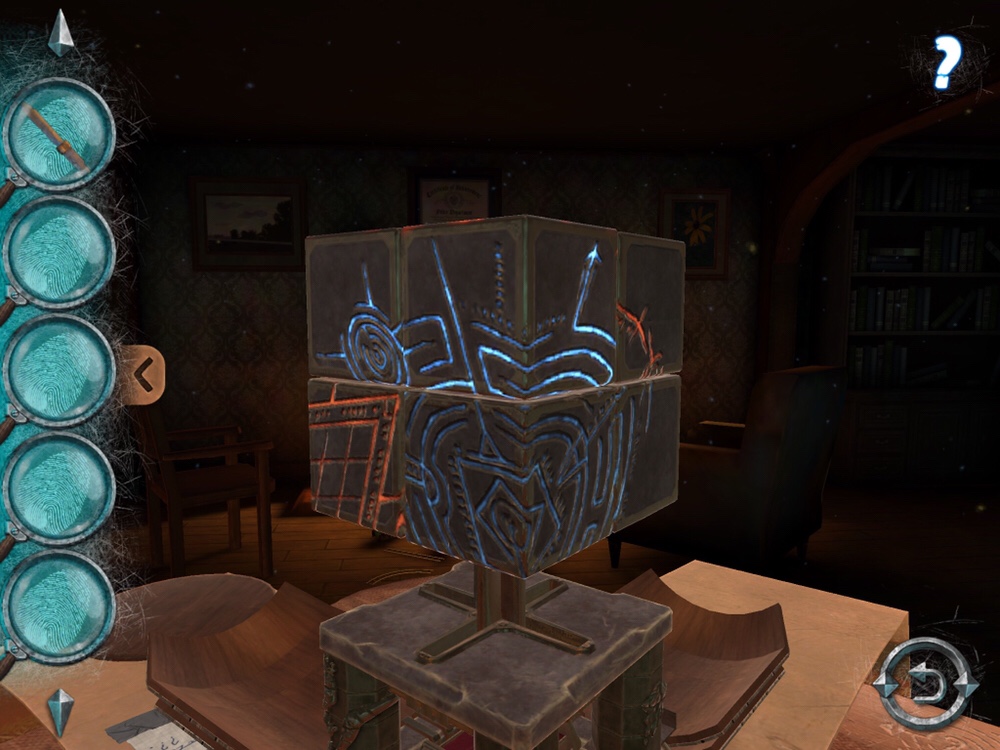 Then I got lucky. On a whim, I saved and exited to the main menu just to see what would happen. Maybe it would restart the puzzle and I could try it again from scratch? Maybe it would fix the bugs? It turns out, when I opened the game again, it had the puzzle solved for me. I just needed to rotate one piece. It was a bug, and normally that would be disappointing, but I was actually relieved. 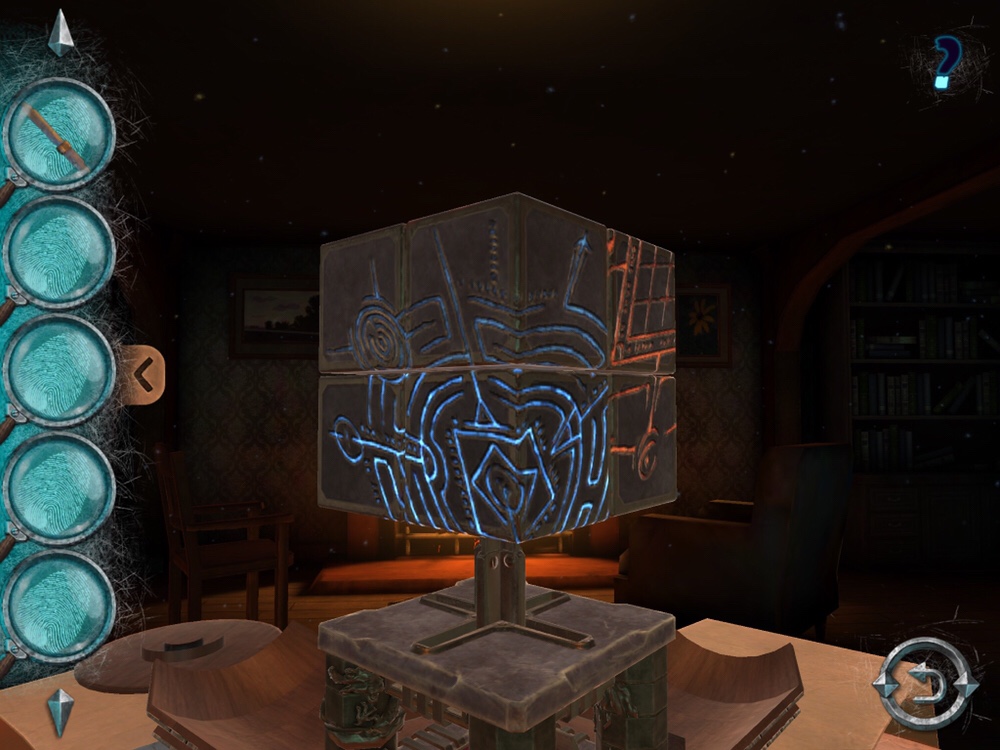 And as you can see in the screenshot above, even when it was most definitely in the right order, only some of the pieces lit up. Once it’s fully solved, everything lights up, as shown below. But since I had never gotten it to light up properly even when things were in the right place, it was a source of endless frustration. I was glad to be done with the puzzle. 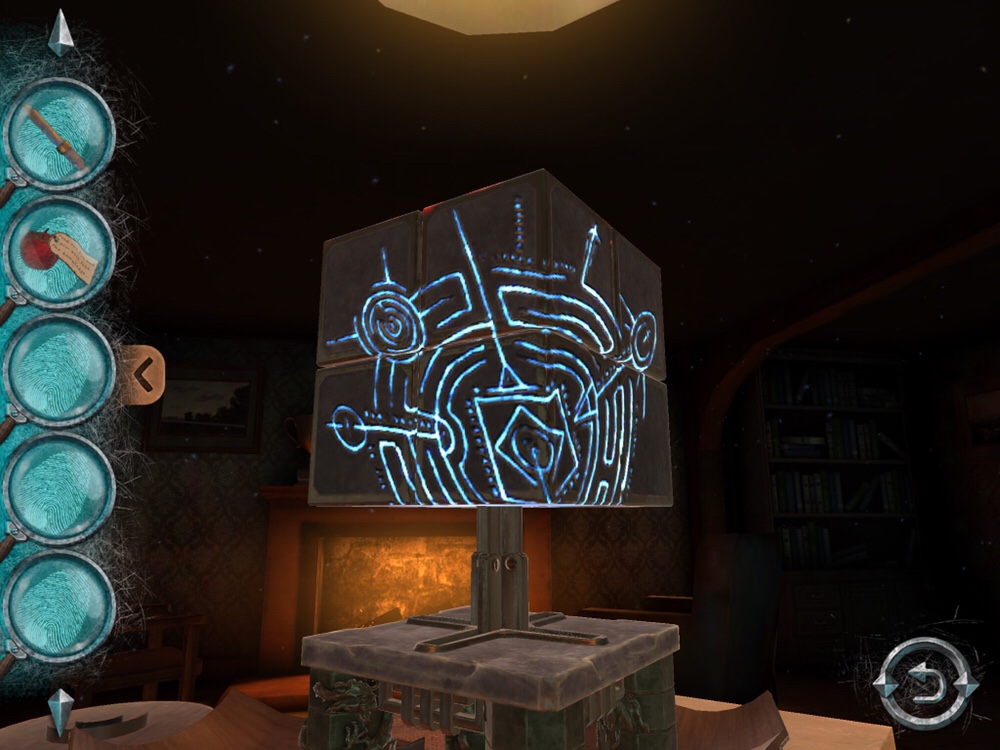 So I moved on. I made some progress. Only to be stuck once again. I needed a three-digit code. I knew that, but I inspected everything and couldn’t find any clue as to what the code might be. So I waited for a hint, since they’re on a very slow timer. And this is what it told me. 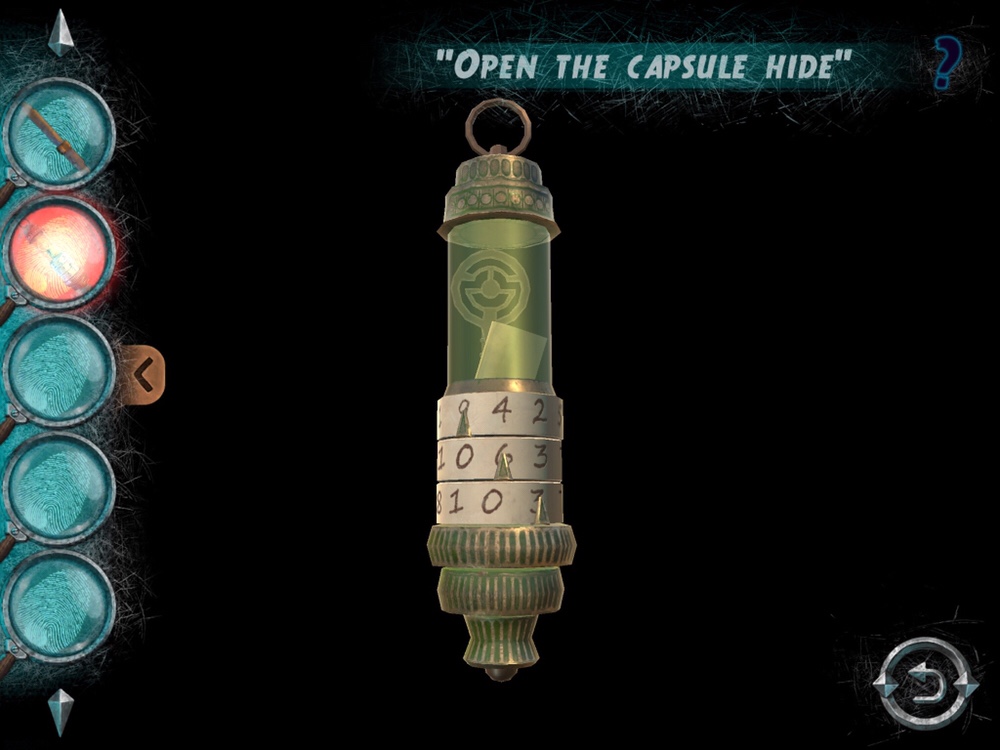 Uhhh thanks? So I waited for another, figuring it must eventually offer me useful information. 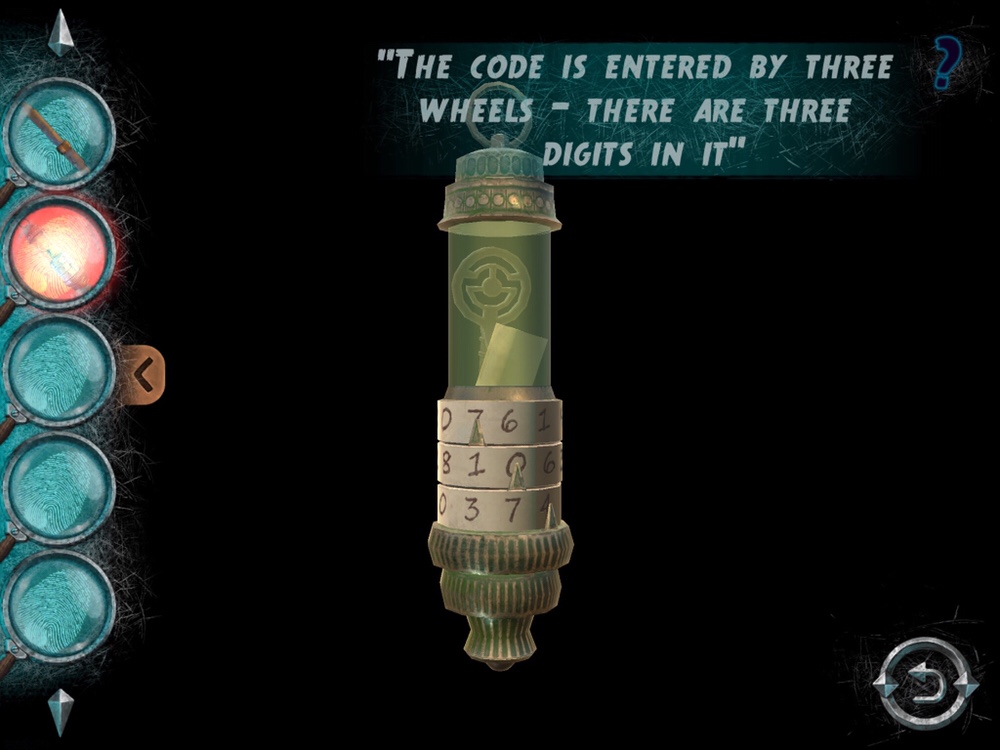 No shit, Sherlock! I waited all that time, staring at the capsule, just to find out that I need a 3-digit code? Really?! So I waited for another hint. This is the brilliant piece of knowledge it imparts on me. 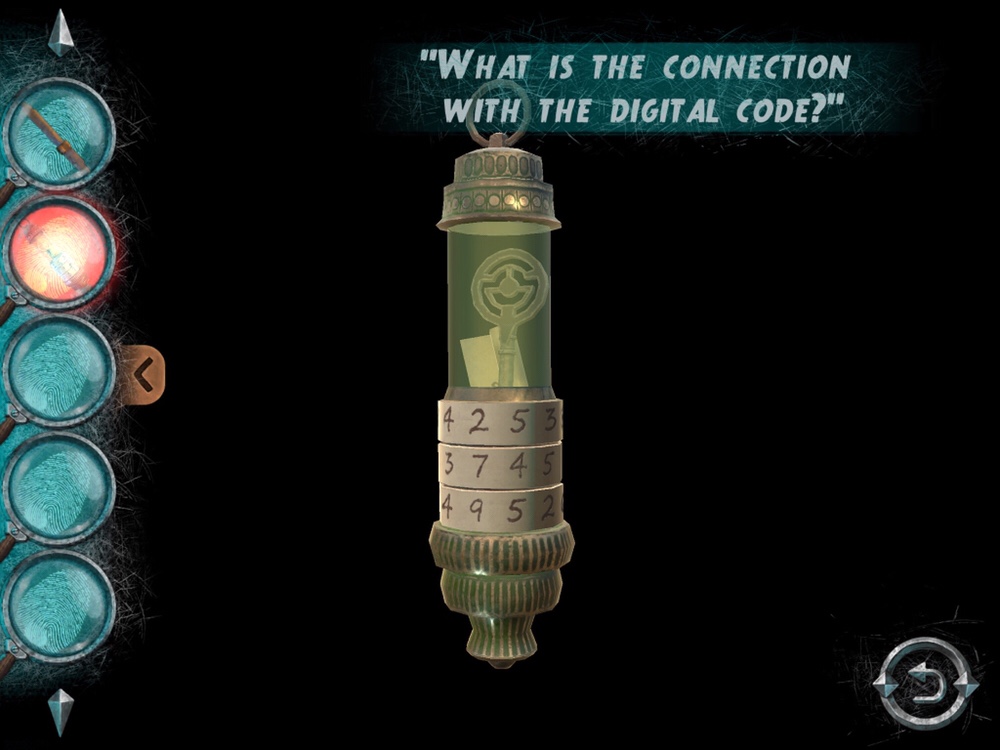 And that was the last hint it offered me. I tried to see some pattern in the numbers, since they don’t go in order from 0 – 9. But so far, I’m not seeing any and I can’t find anything else that might be a clue. With no feedback from the game and no more hints — as useless as they were — I’m inclined to just give up and move on to another game.

I tried reaching out to my contact to see if they can help. Even if I was too dumb for the game, at least having a better hint — or even the full answer — would let me see whether it’s me or the game. But I was told they couldn’t help. And that’s where I decided to stop playing and write this up.

If something changes, I’ll give it another try and perhaps write a proper review as a follow-up to this piece. But for now, I can’t recommend this game to anyone but the most masochistic. If you have a few dollars to burn and want to still try and outsmart the game, by all means go ahead. But I personally can’t justify the time and effort at the moment.

Update: If you do play, make sure not to press New Game if you’re already in middle of a game. It will delete your save file without even asking first!

Update 2: I made progress, thanks to some other players, which you can see in my walkthrough if you want. It’s still a bad game so far.

My Week Unwrapped: August 13, 2021 – Dungeon and Puzzle, Cards of Terra, Pawn of the Dead, wurdweb and More