Where Shadows Slumber
By: Game Revenant

I confess that I hadn’t previously played through the demo of Where Shadows Slumber that was available for the last year or two. Had I done so, I might have been prepared for the brutally violent story present in the release version of the game. On its surface, Where Shadows Slumber can be described as Monument Valley (MV) with shadows, but just a little bit into it, it’s clear this is a much darker and sinister game and certainly not kid-friendly. As far as the puzzles are concerned, the shadows are a great addition to the formula, offering challenges on the level of Forgotten Shores, and even beyond. Despite some technical issues and the occasional frustrating or tedious puzzle, this is a solid choice for any puzzle fans.

The game starts off with a man named Obe, who looks like a Jewish Stay Puft Marshmallow Man, taking a stroll through a forest as some menacing eyes lurk from the shadows. Out of nowhere, a lantern falls from the sky, so he picks it up and continues on his way. Soon enough he learns that he can change his environment using the shadows cast from the light of the lantern. For instance, walking behind a pillar to cast a shadow over a gap might create a bridge. Or a button that didn’t exist before is now visible after passing a shadow over the area. He starts to get a bit attached to this lantern, so much so that when three wild animals attack him over it, he tries to fight them. In fact, it turns out he’s willing to do just about anything to hold onto this lantern. It’s kind of like The One Ring from The Lord of the Rings. Only darker and more violent. 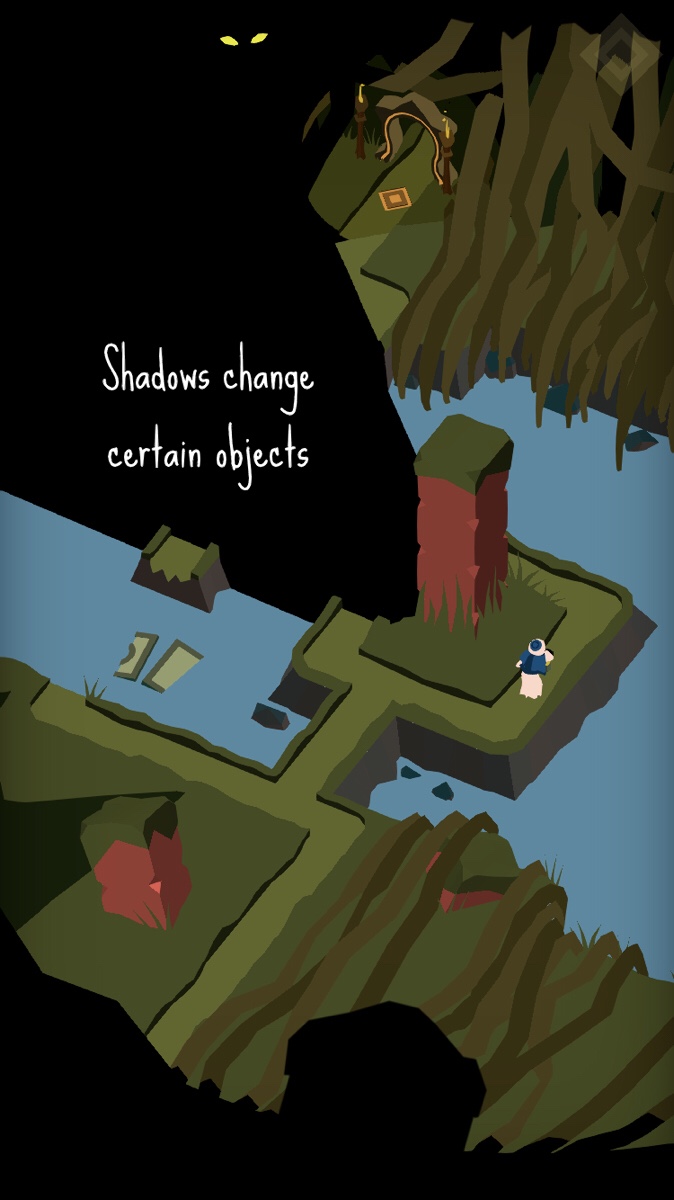 As the story progresses and Obe’s journey continues, the puzzle mechanics evolve. You start to encounter objects you can manipulate directly, similar to that of Monument Valley. For instance, you can pull a platform up and down or left to right. Then there are buttons that activate certain objects or allow you to manipulate objects only while you’re standing on the button. Sometimes you’ll have to pull a pillar up to create a shadow, then lower it to prevent the shadow from continuing. There are some ways to preserve an object so you don’t undo the work you did by passing another shadow over it. Later, you’ll have to use shadows to bring strange ghost-like creatures to life and guide them along a path. There are even sections where other characters walk back and forth along a path and you have to manipulate the environment around them, similar to the crow people in Monument Valley. Just like the game’s inspiration, you’ll need to use them to reach buttons you can’t. There’s a good variety to the puzzles and, even though some feel a bit too familiar, the shadow element adds quite a bit to make it feel fresh and challenging. 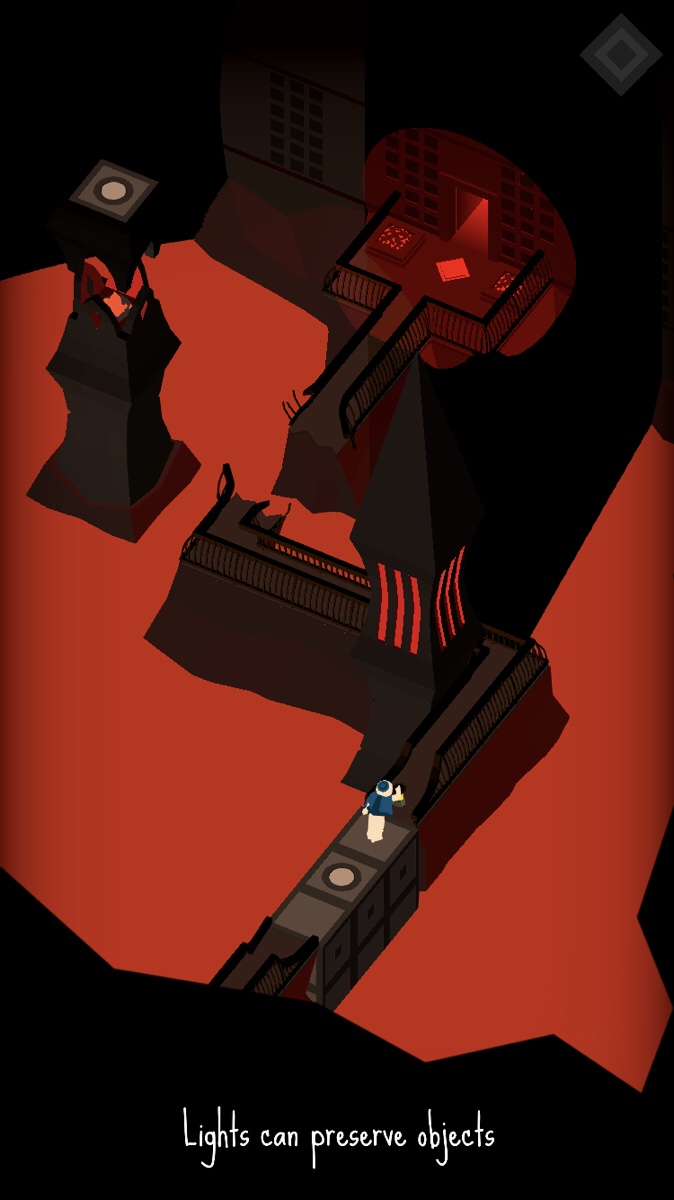 I don’t want to spoil the story, but it gets truly bizarre. It’s definitely not what I expected, and I’m still not completely sure I understood it. Together with the strange characters like lions and wolves that walk on two feet, and the amorphous shape of Obe himself, I was a little thrown by the oddity of it all. The light- and shadow-play together with the low-poly environments give off a stylish vibe, but the characters are mostly out of place and lack the same kind of polish. Couple that with the extreme violence, and I wasn’t so much moved by the story as perturbed. I was expecting something lighthearted, maybe even heartwarming, and instead felt kind of awful about helping Obe on his journey. I almost wished the game would give me an alternative. It is interesting how the lantern doesn’t just change the environments, but also anyone who comes in contact with it. But the cartoon violence here is so over-the-top it could give Slayaway Camp a run for its money. I’m not against violence in games, per se, and there’s definitely room for it when telling a meaningful story. But something about it felt disconnected from the rest of the game, like it just didn’t fit. It was hard to take Obe’s angry round head seriously, even when he was downright evil. And there didn’t seem to be any real consequences for his actions, making it hard to tell whether or not we’re meant to empathize with him. 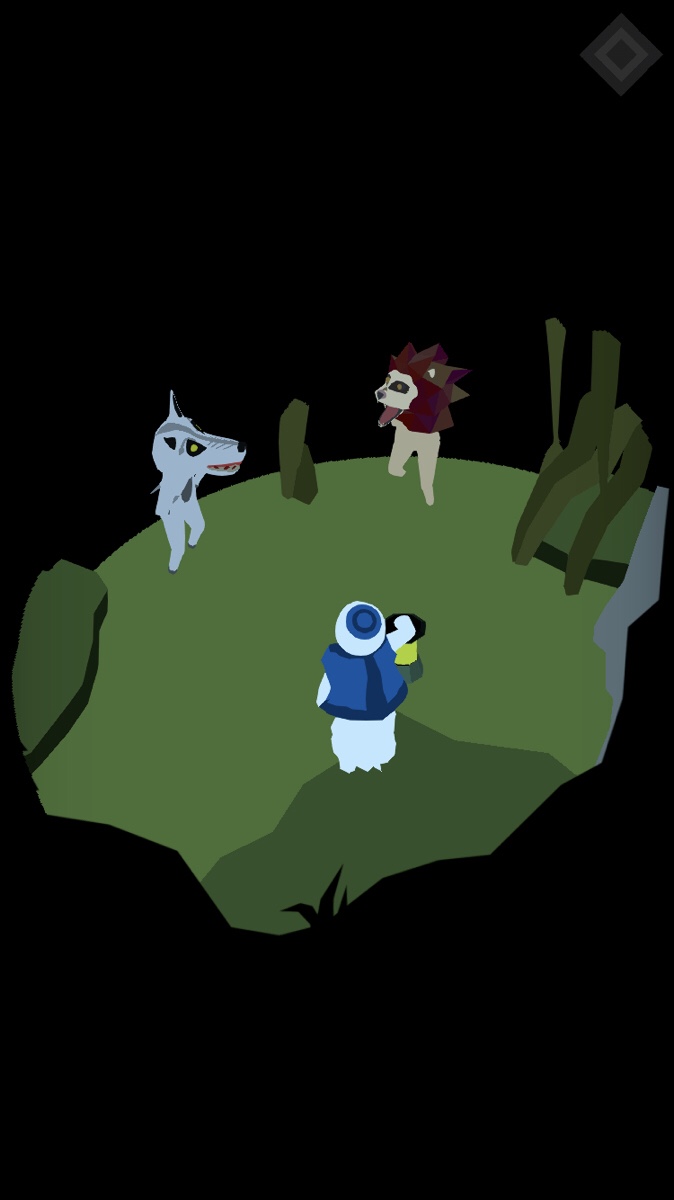 Still, the puzzles are the main attraction, so as long as you can stomach some cartoon violence, you’re in for a real treat. In hindsight, most of the puzzles are straightforward and not too difficult, but when I first played them, they did a number on my brain. Working out the new mechanics and understanding the rules without them being given can be tricky at times. So those looking for more Monument Valley but with more bite than the sequel, you should be pretty happy with the offering here. Another highlight was the level select screen, which plays with shadows as you swipe up or down. I thought that was a really nice touch that brings everything together. The soundtrack is also phenomenal, from the title screen to the closing credits. I highly recommend wearing headphones, though you will also hear Obe’s breathless panting as he runs around. 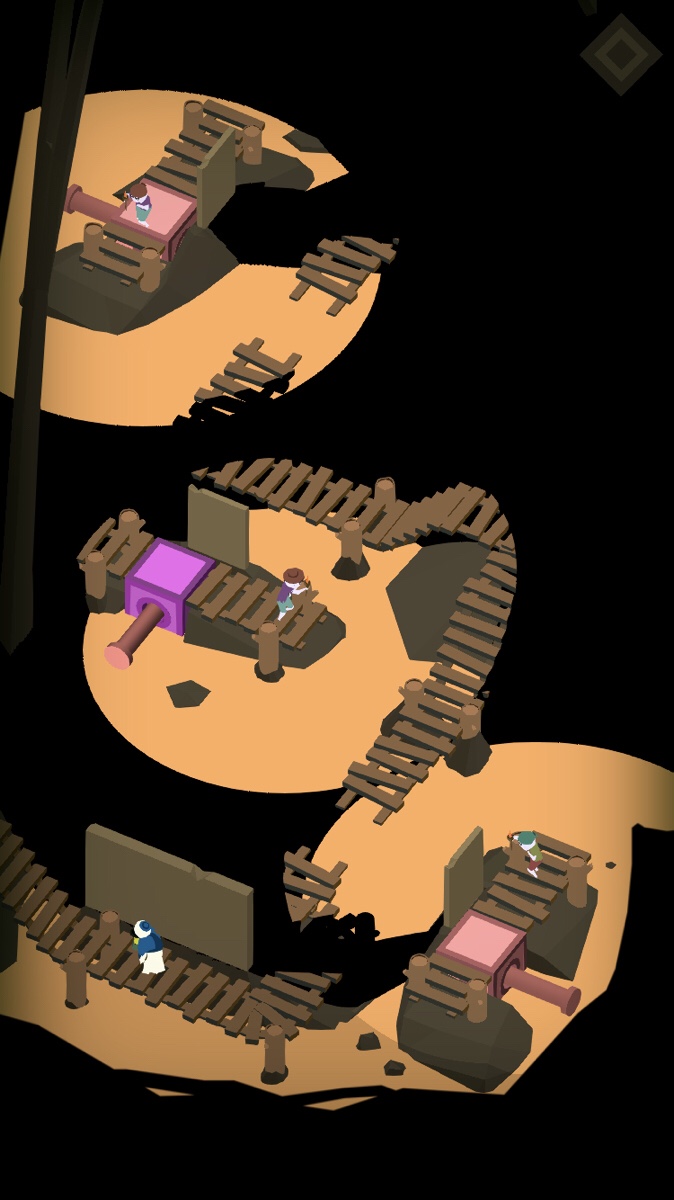 Now, despite my eagerness to play more games like Monument Valley, I do wish the game had tried a little harder to look more distinctive. Every time I noticed a gazebo-like structure or a staircase or a specific doorway, I thought, “that’s from MV.” Some things were so obviously inspired, it was hard not to stop and point them out. For instance, there are eight-pointed star buttons that reminded me of those in MV that you stand before at the end of each chapter. And I already mentioned some puzzle mechanics that seemed borrowed from the game. Seeing so many similarities makes it hard to talk about the game on its own merits, without the constant comparisons. And it’s a shame, because Where Shadows Slumber really does have a lot of innovative ideas all its own.

As much as I enjoyed the game, there were some frustrations, including glitches and frequent crashes. At one point. I tried to walk through a door and couldn’t figure out why it wouldn’t work. I finally restarted the level and was able to do it right away. Another time, a rotating platform didn’t activate properly, so I kept having to restart the level. At least in that instance, it worked the first time I started the level, so I knew when it was glitching out. On that same level, the creature I needed to get to a button kept getting stuck on a nonexistent wall, so I had to start over again. In the first one-and-a-half hours I played, I didn’t have any issues with crashing, but later I had such frequent freezing and crashing the I was close to throwing in the towel. I’m glad I stuck with it, as some of the later puzzles are truly inspired. But considering there’s no mid-level saves, I do hope they sort this issue out soon. Some mechanics are also confusing and hard to understand the rules, even after completing the level. Others can be a little tedious and frustrating mostly because it’s easy to mess up a shadow and have to fix your mistakes, or because you have to wait for an automated character to walk across the board. But those are few and far between, and I was able to appreciate the creativity behind those levels, even if they were a bit frustrating to pull off. The majority of the puzzles are clever and satisfying to solve, so it was worth the occasional frustration to experience them. 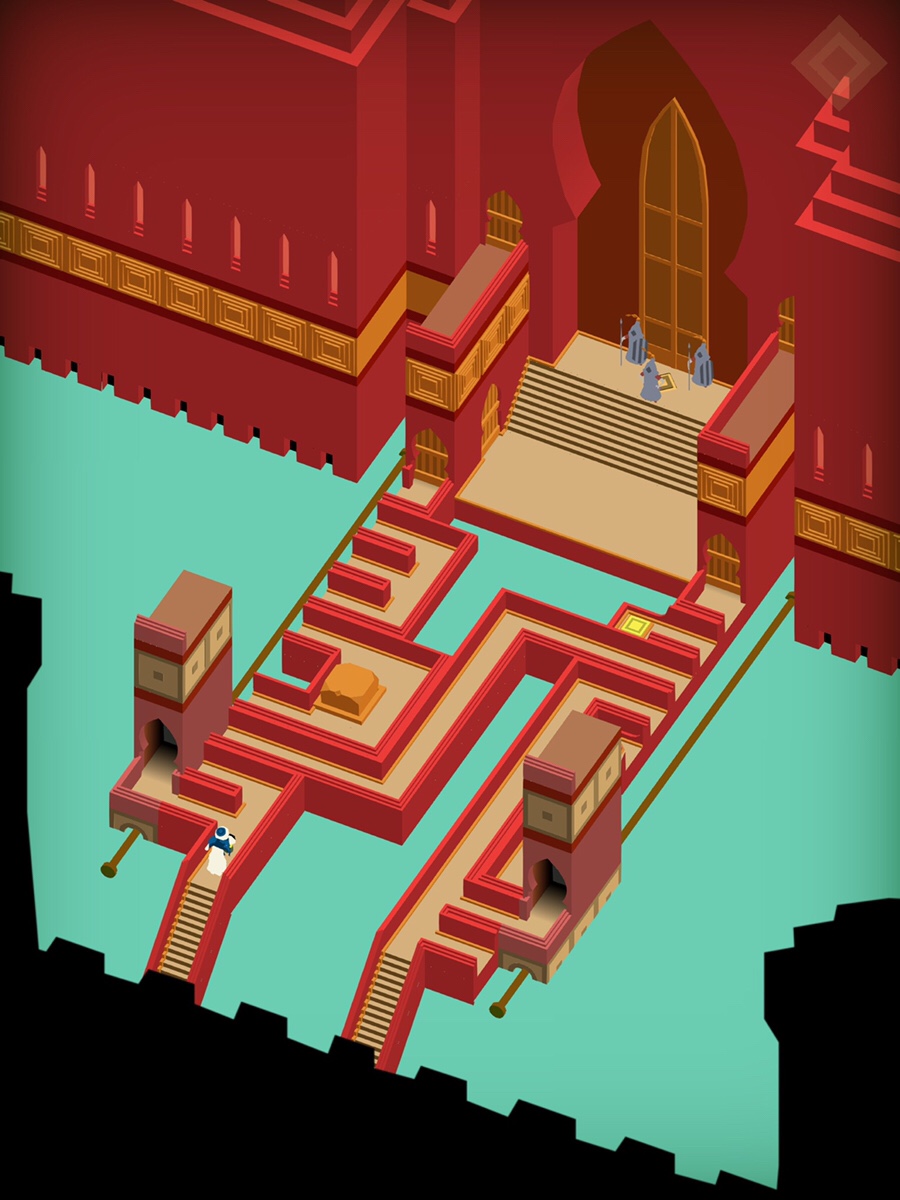 Overall, I’m glad I played Where Shadows Slumber. It may not be perfect or as polished as Monument Valley, and I may be thinking about and trying to understand the story till the end of my days, but there are so many smart ideas. For the most part, it’s user-friendly and feels great on a touchscreen. There are only a handful of levels that feel a little awkward trying to control the shadows through tap-to-move. But its strengths far outweigh its negatives and it’s an easy game to recommend to puzzle fans who can handle some cartoon violence. It’s clearly a work of passion and the three years the developers spent on it paid off. If they can iron out the bugs, it’ll be even easier to recommend. So go grab the game here and start performing magic with that precious lantern before someone else lays their hands on it.