I didn’t grow up playing Magic the Gathering and its ilk, so I never really developed that skill of finding synergy between cards and constructing a powerful deck. But there’s been a surge of deck-building roguelikes in recent years in the digital space and they’re such a great fit for touchscreen devices, that I can’t help myself but try them all out. Slothwerks’ Meteorfall: Journeys is the only one that really had sticking power for me, largely due to its low barrier to entry. Its easily accessible gameplay and minimal focus on deck-building made it the perfect pick-up-and-play dungeon crawler and a great introduction to the genre for those who find other deck builders a bit intimidating. Now, the developer is back with Meteorfall: Krumit’s Tale, a more advanced roguelike deck-builder that takes place in the same universe and features many of the same heroes and enemies. I’ve had it for about a month now and still haven’t beaten the game on normal difficulty with any of the heroes. But thanks to a number of accessibility options, I’ve still been able to enjoy it and can recommend it to those who, like me, might find the deck-building intimidating, especially while getting familiar with all the cards and enemies.

In Krumit’s Tale, you start off playing as the warrior, Bruno. Each dungeon you enter is represented by a deck of tiles that combines your own item, spell and equipment tiles in with the enemies. Then it’s all mixed up and slowly spilled into 3×3 grid. Each time you remove a tile from the board, it’s replaced by another until they run out. You complete a dungeon by defeating all the enemies in the deck. Bruno’s skills focus on melee combat, so you usually will have to select an enemy and battle it out one-on-one. As with games like Slay the Spire, you can see their next attack before making your move and prepare accordingly. To help you out, you purchase weapons and other items from the board using gold you’ve earned from killing enemies or other actions. For instance, if you see a skeleton will attack for 2 damage, you can equip an item with 2 armor to both block the attack and parry it, stunning your opponent for one move. If you clear a dungeon, you’ll earn gems that can be used to purchase new cards from the shop, as well as a choice of one of three tiles and one of four perks. 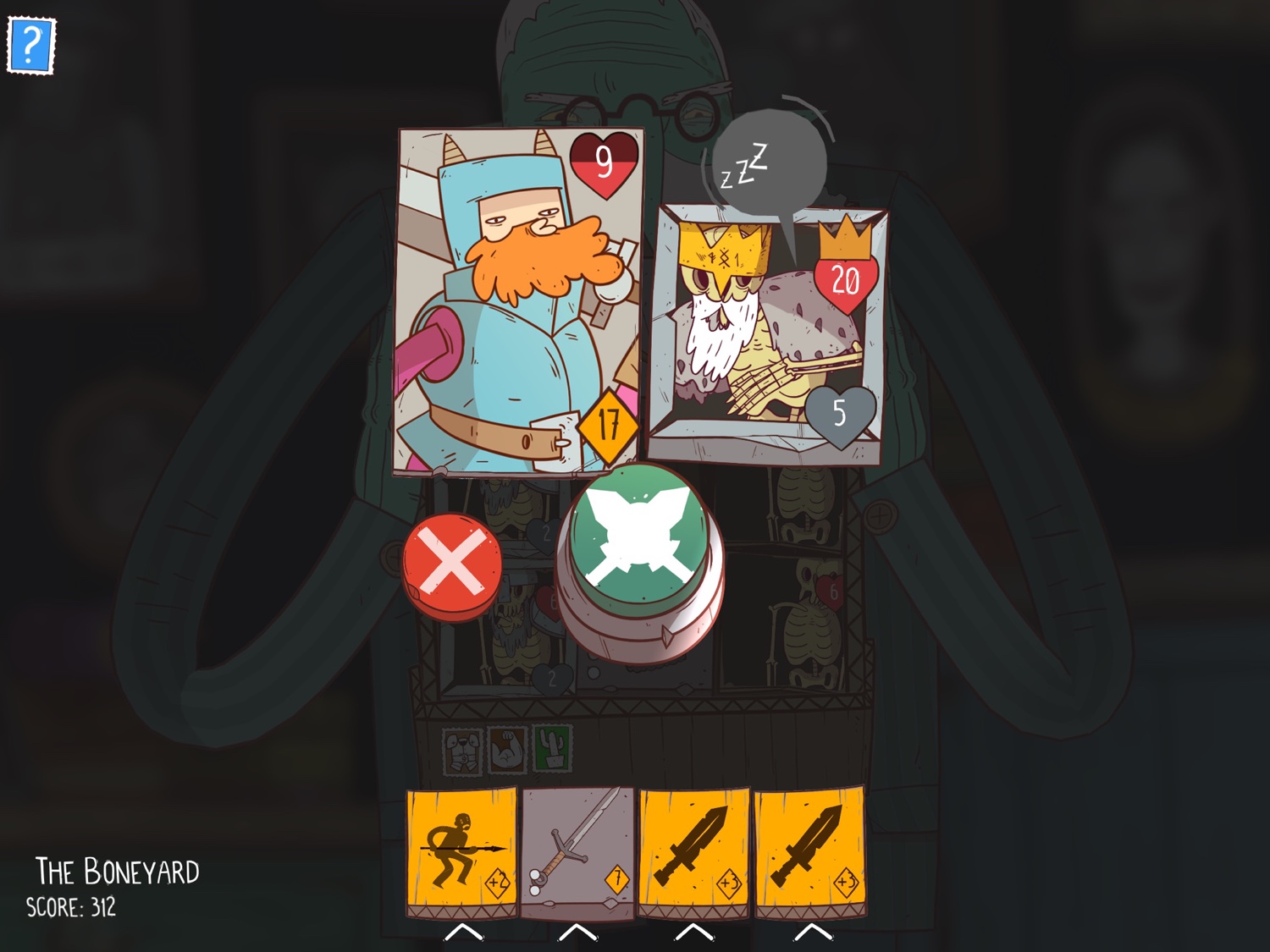 The perks give you passive bonuses, such as extra health or attack, though many of them have a catch. For instance, Scrappy allows you to earn two extra health every time you discard a tile, but it also lowers your max health by four points. There’s some luck involved in which perks you’re offered, but also skill and strategy in choosing the right ones that will benefit you the most. Pruning your deck is also a large part of the strategy, though, and I only started to improve at the game when I began removing some starting gear and replacing them with better equipment. Since there’s no score penalty for using the gems you earn, it makes much more sense to buy new tiles with them instead of hoarding them. This was hard for me to get used to, since spending coins in Journeys does negatively affect your score. 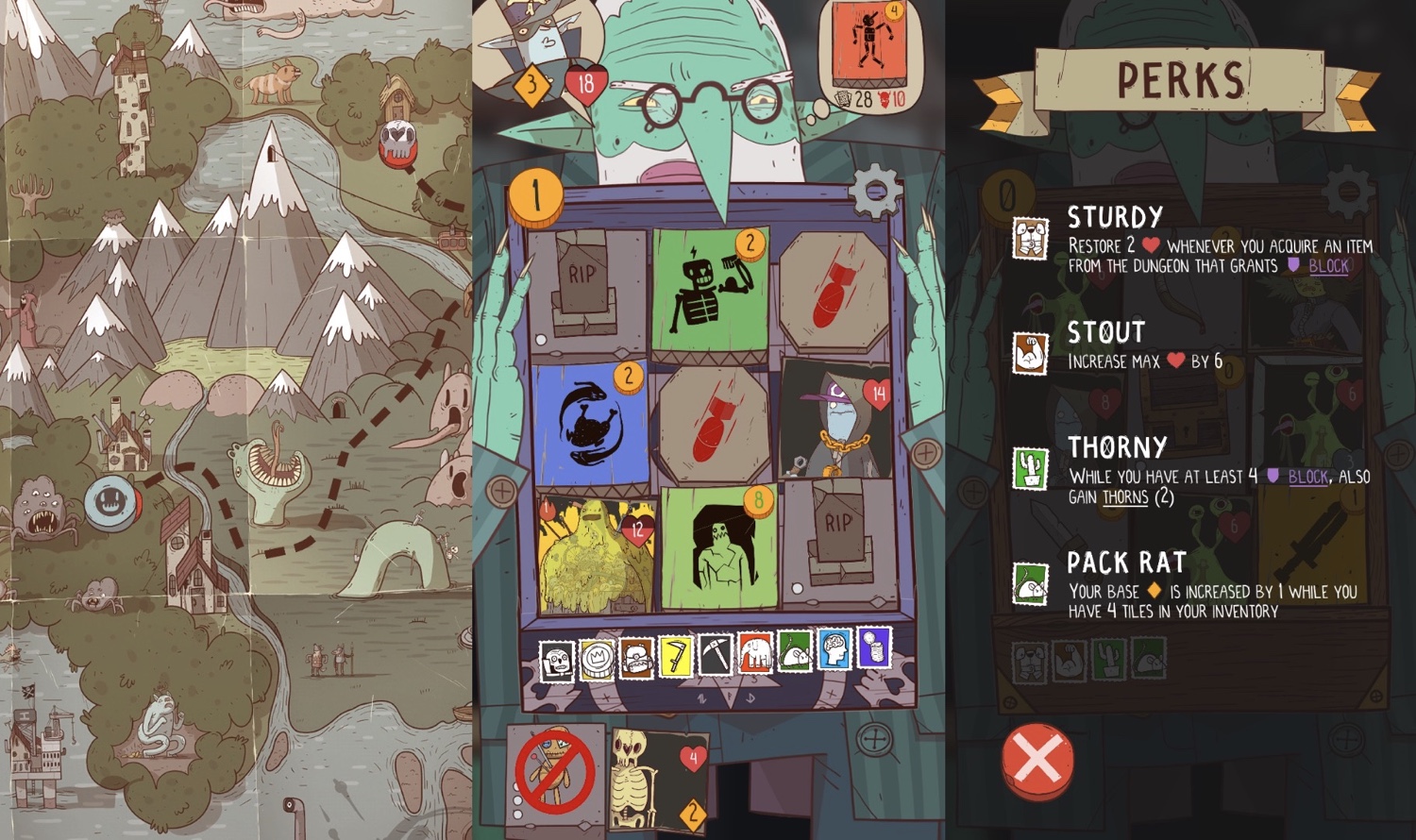 Each time you play, you’ll earn some experience. As you level up, you’ll unlock new cards that can appear in your game, as well as new characters. But for those who don’t like any grind at all, you can unlock everything all at once from the settings. Most of the familiar faces from the original game are here — Bruno, Greybeard, Mischief, Muldorf and Rose. What struck me each time I unlocked a new character was how different they all are, to the point that it feels like five games in one. For instance, a skillful run with Greybeard would have you avoiding melee one-on-one combat altogether, instead using spells to knock enemies right off the board. It’s super satisfying to use a lightning storm to do 4 damage to all enemies on the board, possibly taking a few of them out at the same time. Muldorf can reanimate the dead and have them fight on his side, but it’s not quite as powerful as his undead army in Journeys, since you can only hold up to four tiles in your inventory at a time and those minions count as inventory. In the time I’ve been playing, I’ve certainly found my favorites, but there’s characters I haven’t even spent much time with yet. So I think it’s fair to say I won’t run out of content anytime soon. 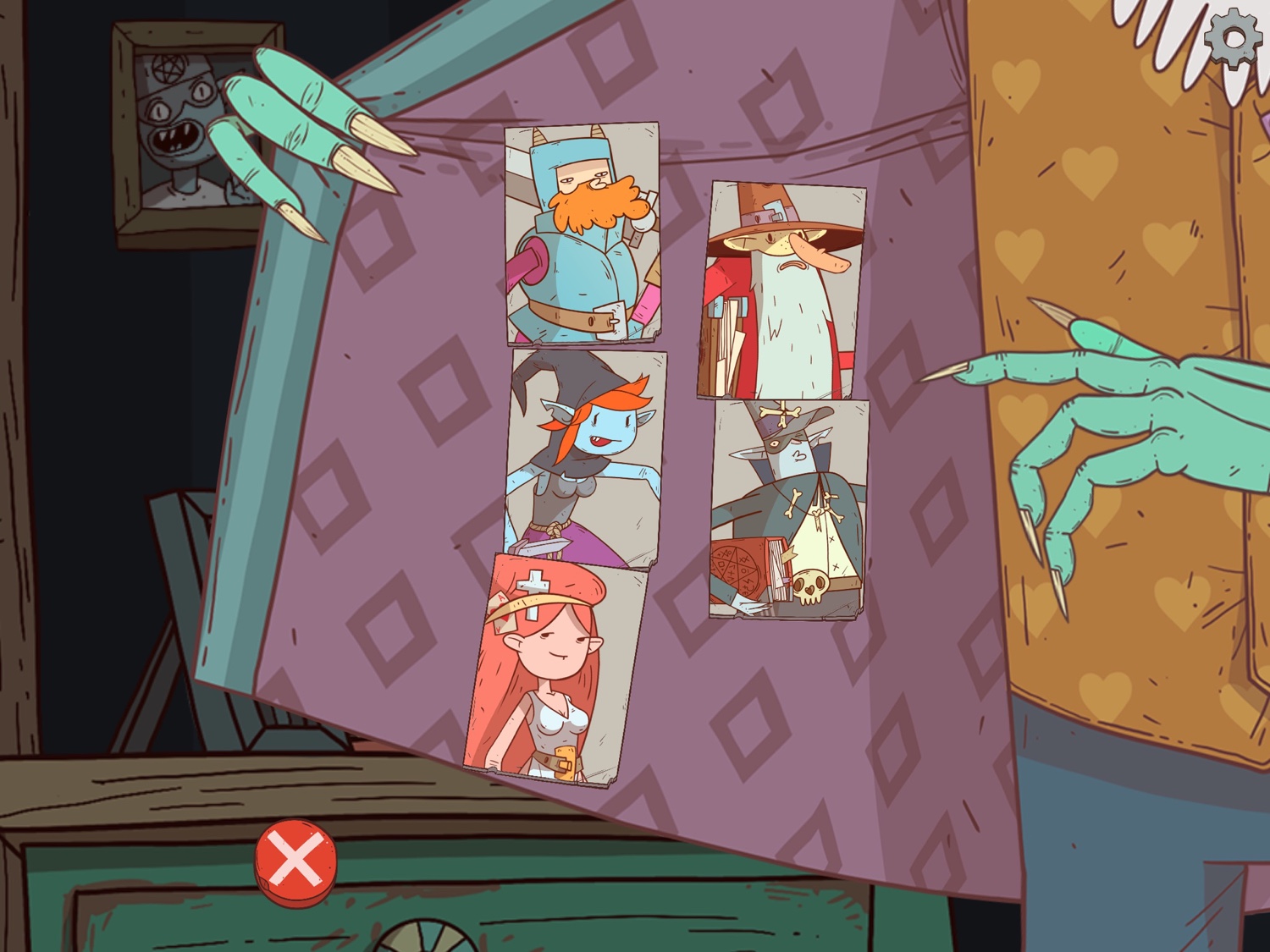 Each run of the standard mode consists of nine dungeons, including five bosses. Unlike Meteorfall: Journeys, you don’t get to choose the dungeons you enter. Instead, they’re randomized each run, with each tier being pulled from three possibilities. In total, there are over twenty different dungeons and over ten bosses you can encounter. So even after several runs, you might not encounter every enemy in the game. I’ve yet to beat the game on the default difficulty, and have been finding it a bit off-putting to start from scratch each time, since a run can be quite long even if you die and don’t complete it. Thankfully, there are multiple “mutations,” which are modifications made to the default mode that change things up. I’ve been using the Easy mode a way to get more familiar with all the tiles and enemies, and also learn strategies for each of the heroes. It still gives me a challenge, as I’ve won games by the skin of my teeth, but the small bonuses you get make it feel more doable for me. But even more than that, I’m enjoying Boss Rush mode, which cuts out all the non-boss dungeons and shortens the game to just the five boss dungeons. This makes for a shorter, more mobile-friendly game, but also give you more practice with the bosses, the toughest dungeons in the game. So if you’re looking for a more streamlined experience, I highly recommend trying it out.

These mutations are a big reason why I haven’t given up on the game despite never beating it on the default difficulty. There are so many ways to play that anyone should be able to find some enjoyment here. If you’re really struggling and want something more laid back, you can try the Archmage mutation, which has a set deck made up of three different tiles and you can’t modify it. It’s the easiest mode I’ve tried, but I find it relaxing. I doubt it would hold one’s interest on its own, but it’s a nice little diversion for when you get tired of having your butt handed to you on a platter. And if the available options don’t satisfy you, the developer also previewed for me the upcoming Explorer mode that will allow the player to enable different modifiers to make it easier. Slothwerks has fully embraced accessibility with Krumit’s Tale and doesn’t want anyone to be ashamed for playing their own way. And for those of you who find it too easy, there are eight ascension levels similar to the Demon mode in Journeys. Each time you beat it, it gets a little harder. So no one is left behind here. There’s even a Daily Challenge for those who can’t get enough. 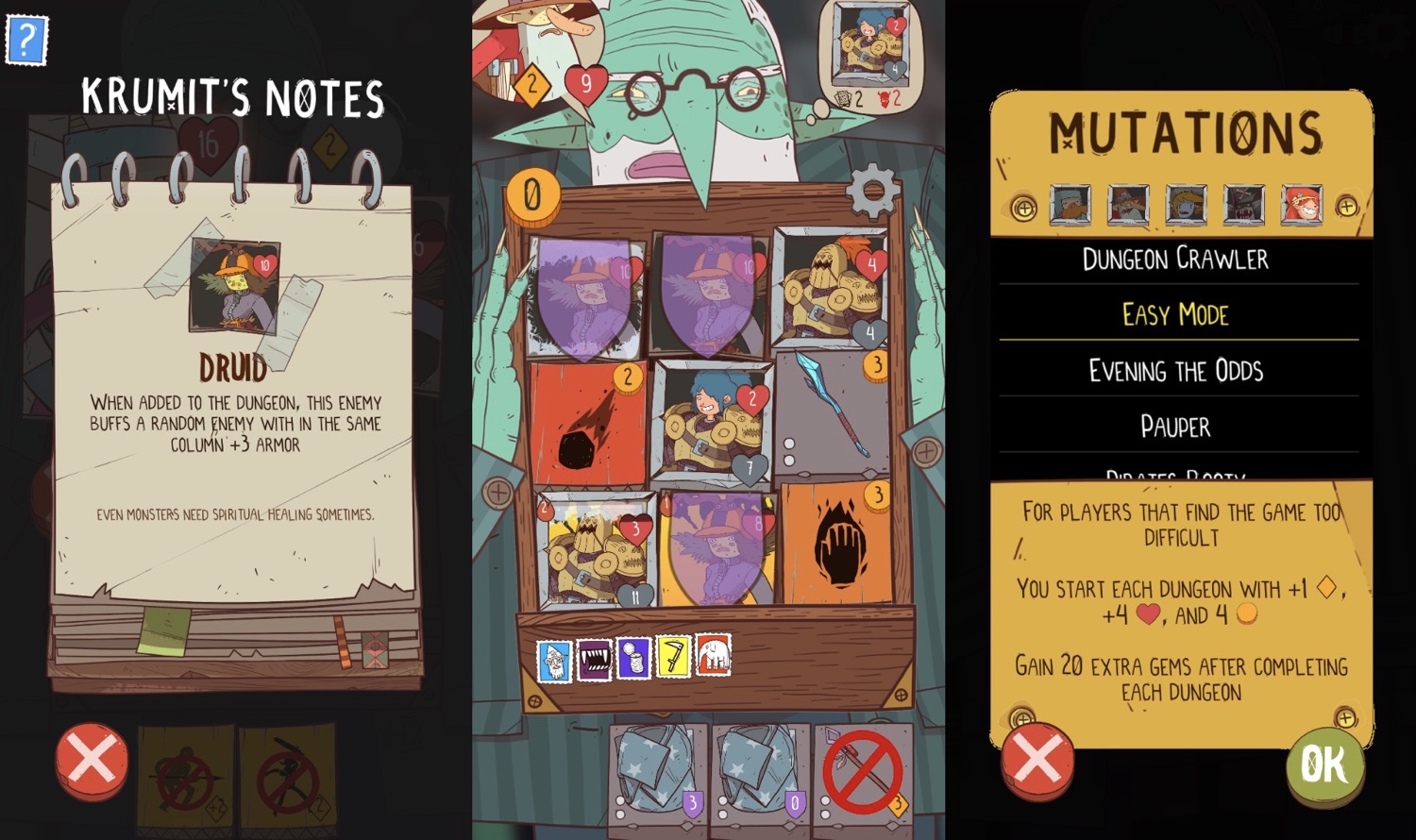 Another big reason I keep coming back to Krumit it is how good it feels on an iPhone. As much as I like the core gameplay of Slay the Spire, the mobile interface is a bit of a turnoff and keeps me from really delving into its mechanics and getting better at it. When Dark Mist added portrait mode a little while back, I got sucked in and unlocked all the characters, though I still haven’t beaten the game with any of them yet. There’s something to be said for being able to pull out the game and play for a few minutes at a time wherever you are, even if you only have one hand free. Since Krumit was designed with mobile in mind from the start, nothing was compromised to bring it to the platform. It even plays in either landscape or portrait mode and has iCloud saves to sync progress between devices. You can also import and export your save data to other platforms besides iOS.

Of course, I can’t review the game without mentioning the fantastic artwork and animations from Evgeny Viitman, who also worked on Journeys. I mentioned this before, but the characters really come to life thanks to both idle and battle animations. I also love Krumit’s little ear twitches and commentary. You can shut that off if it bothers you, but I find it adds more life to the game. There’s also a wonderful map that you can see your path marked on, but again if you don’t want to watch those animations you can tap to skip them. There’s also an option in the settings to speed up animations. So many things have been taken into consideration to make for a pleasant experience.

One thing that is lacking is individual leaderboards for each character. The competitive nature is what kept me playing Journeys all this time, trying to squeeze out a few more points by taking extra risk. That said, I’ve mostly been playing the daily challenges since they were added, and Krumit’s Tale comes with those from the start. I’m sure that once I’ve gotten a proper handle on the core game, those will become my main focus and I won’t even be bothered by the lack of competition in the other modes. I did, however, encounter a couple of small bugs. The bigger one is that my run history hasn’t been syncing properly between devices, to the point that I’ve had it completely wiped out at times. The developer is aware of the issue and working on a fix, but if that’s important to you, you may want to stick to one device until it’s updated. Also, there’s a bug where progress is not saved at the end of a dungeon, but that’s already been fixed in an upcoming update. Overall, the game is very polished, and I appreciate how much control Slothwerks gives the player over their own experience. I also expect we’ll see continued support for the game as we did with Journeys.

Meteorfall: Krumit’s Tale has a higher difficulty curve than its predecessor, and it might not have gotten its hooks in me the same way, but I would still very much recommend it to both die-hard fans of the genre and those still getting their feet wet. There’s so much content here, whether you beat the final boss on your first try or are struggling even a month later. The iCloud sync makes it easy to play either for long periods at home or on bathroom breaks at work and there’s none of that clumsy awkwardness that comes from a game being half-heartedly ported from PC. You can tell Slothwerks plays mobile games and and knows how they should feel. If you’re looking for a new card-based dungeon crawler that’s both challenging and accessible, you’ve come to the right place. So grab Krumit’s Tale here and start your quest to defeat the Uberlich.