After a number of sporadic releases that didn’t really interest me at all, I was starting to wonder if I’d already seen the best that Apple Arcade has to offer. Then, out of the blue, we were surprised last week with a new release from Sumo Digital, called Spyder. For the first time in a long time, I eagerly downloaded an Apple Arcade game and was genuinely excited to play. After all, you take on the role of Agent 8, a robotic spider that can crawl all over walls and inside small spaces without being detected. But Spyder isn’t just about a great concept. It delivers on all fronts to make you feel like you really are a tiny but mighty mechanical critter trying to save the world.

First off, let’s talk about those graphics. The game takes place in realistic environments all in 3D. You start off in an office-like war room, with the goal to stop a nuclear bomb from the computer. The first thing to do is get the printer working again, and you do so by spitting some web at the power button, changing the cartridge, and then stepping on the “print” button. Between all these steps, you’re crawling around the room, defying gravity. Mundane items like a spilled coffee cup and a magnifying glass are infinitely more interesting when you’re walking on them and exploring from a bug-eyed view. It’s surprisingly satisfying to step on a keyboard and see all the keys move. And the game doesn’t stop there. Each level takes you to a different environment, like a plane, a submarine, and even a moving train! But it wouldn’t be enough to just have impressive environments. Agent 8 is also fully 3D and and moves very realistically on and around objects. His eight legs have suction cups that allow him to stick to surfaces, even if he’s using two to carry something. Pushing and pulling objects all looks and feels how you would imagine it to. And if you have him face the camera, you can see he even has various little facial expressions. He’s just so full of character. This is definitely one of the most — if not the most — impressive Apple Arcade games, graphics-wise. 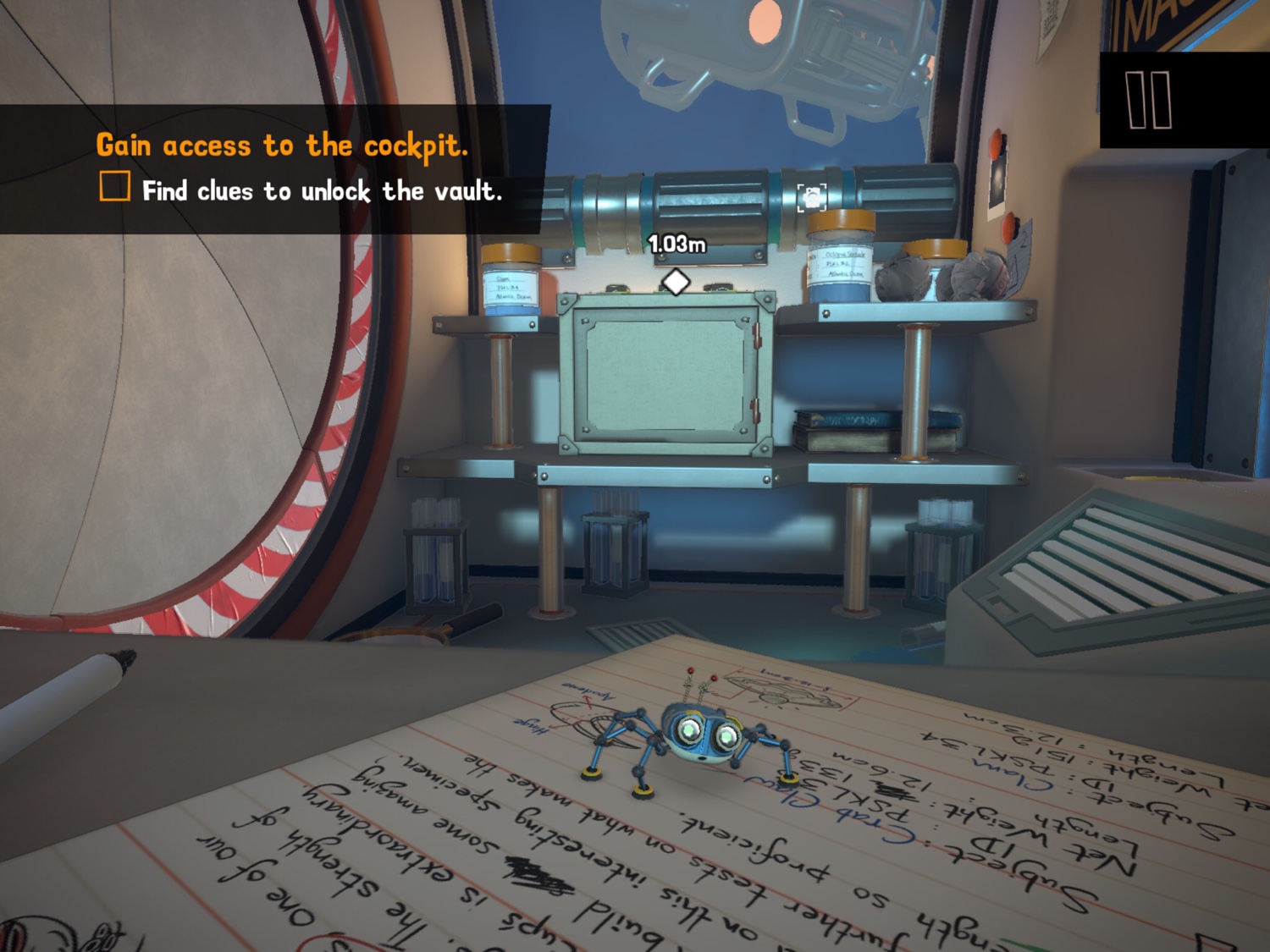 Agent 8 also comes equipped with a whole arsenals of gadgets, such as a web splat, grappling hook, screwdriver, and even a laser cutter. As I mentioned, he can also pick up, carry and throw objects. The game loses a bit of its puzzling aspect because it doesn’t let you choose between different tools. Instead, it simplifies things by automatically pulling out the right tool for the job. That said, there’s still plenty of things to work out, like finding clues to unlock a safe, or figuring out how to turn fans off. There are also arcade-like sections where you have to avoid getting hit by falling debris or navigate a maze that wants to electrocute you. There are also slippery surfaces Agent 8 can’t climb on, and water-filled areas you need to somehow cross. From beginning to end, the game is just full of endless surprises. I especially liked how you could walk on a trackball to control a computer cursor, even if the mini games on there tended to stress me out a bit. There’s just so much creativity packed into this little game. 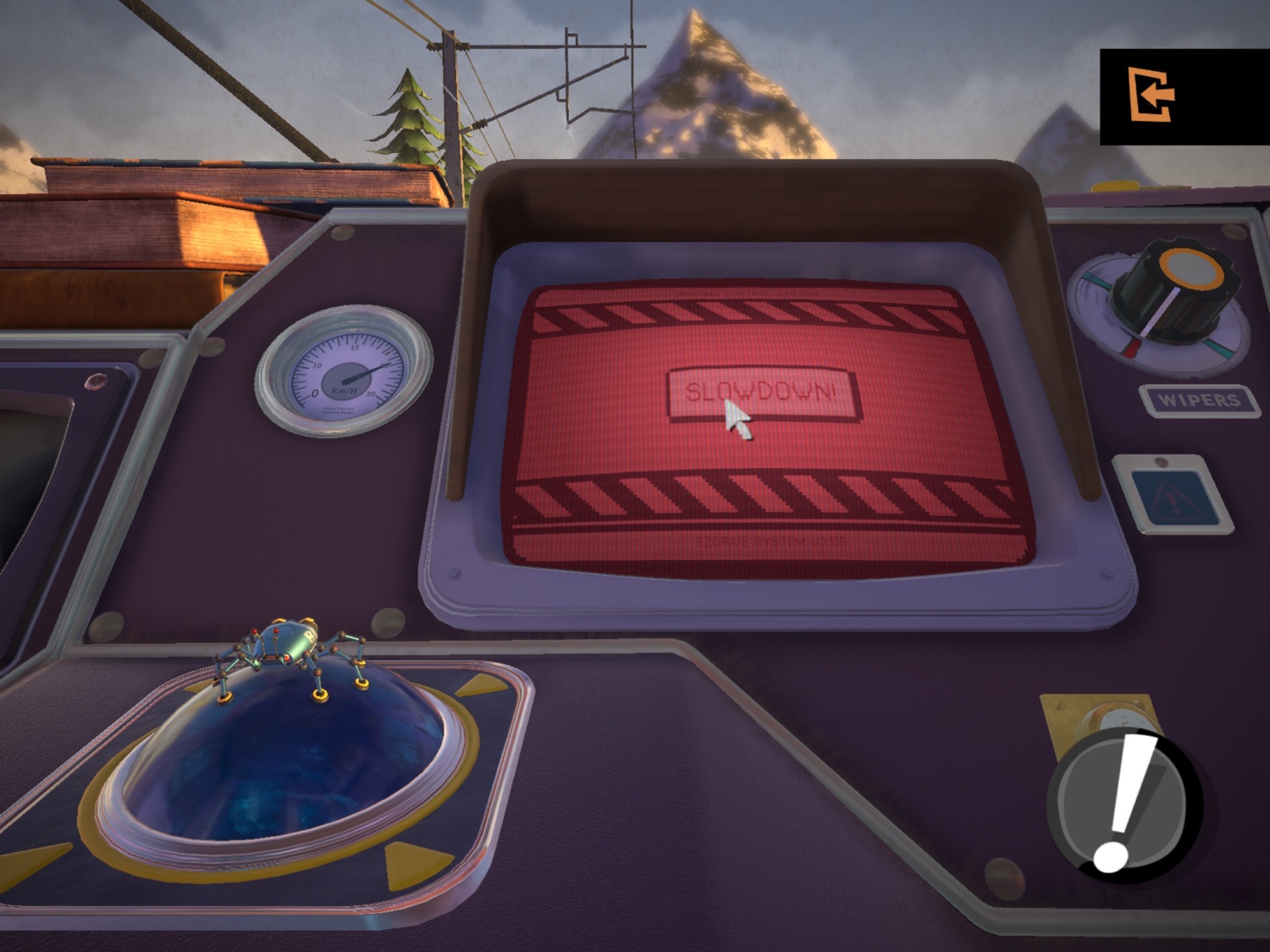 Spyder is also a very accessible game. Most of the time, there’s an arrow that guides you to your next objective, so you’re unlikely to get stuck wondering where to go. Also, any failures will only set you back a short distance, usually not even a full puzzle. So if you have trouble with any of the skill-based sections that require some careful timing, you’re still unlikely to ragequit. And for those who still want more after completing the game, you can hunt down all the achievements. There are also bonus collectibles to find like stickers and photos. I haven’t even found all the stickers myself yet, and I only just started working on the photos. But I like how you need to look for a specific item to snap a photo of. It reminds me of UFO on Tape: First Contact, but less stressful. 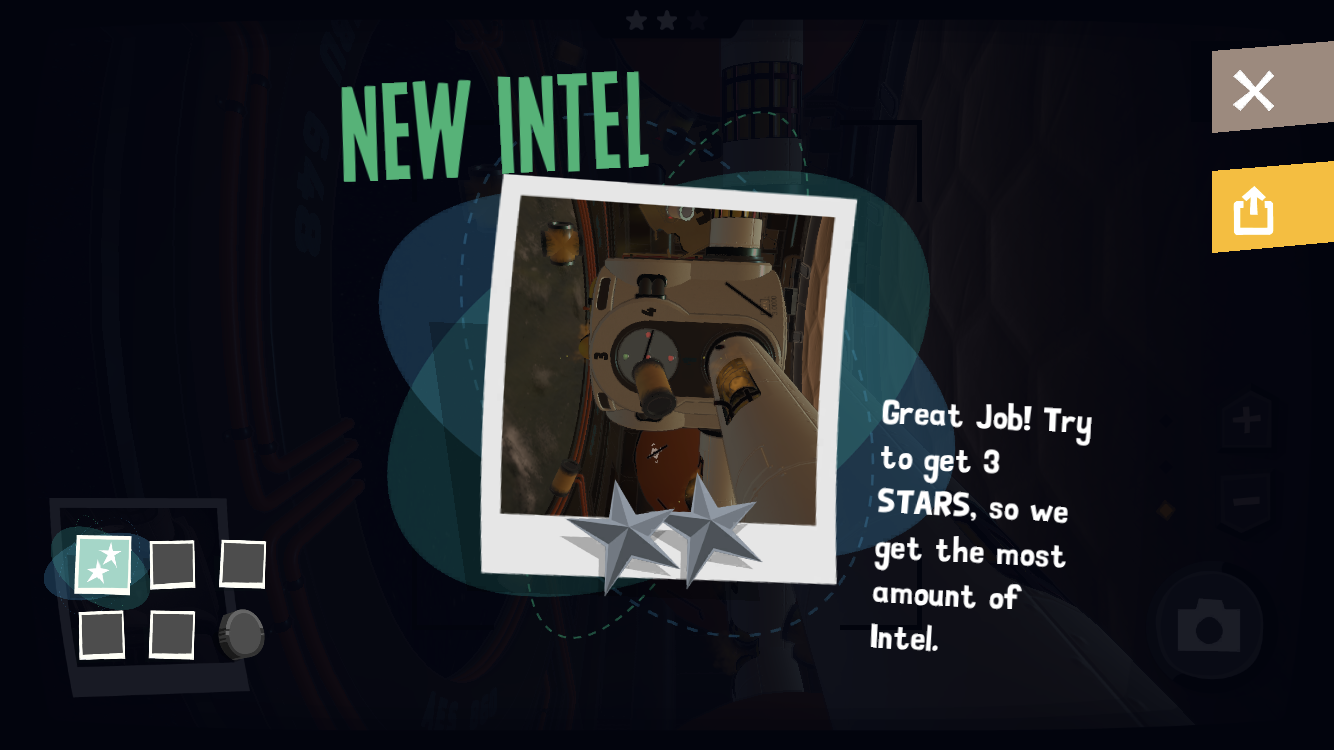 On top of all this, there’s a great spy soundtrack, adorable Agent 8 sound effects, and little notes scattered around to read to fill in some of the story. There are even some Easter eggs to find, like the snake from Snake Pass. Everything about the game oozes quality and shows an incredible attention to detail. While I got several hours out of the six available missions on my first playthrough, it’s hard not to be disappointed it’s over. Hopefully, the fact that it’s on Apple Arcade means content updates will come at some point. 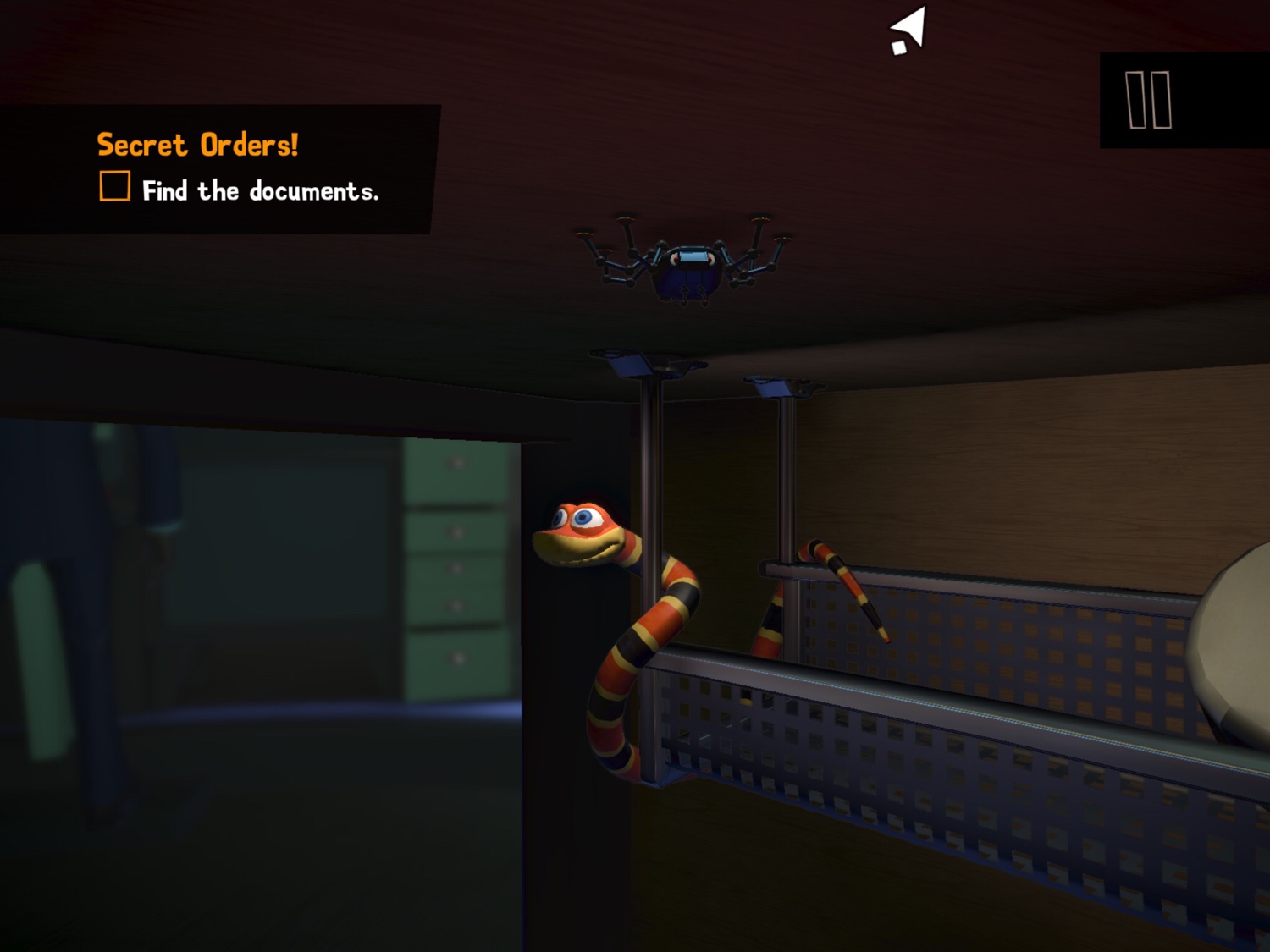 Now, despite all my praise for the game, I do have some complaints. A small one is that the objectives are poorly placed, taking up too much space on the screen. I would love to be able minimize it or move it to the pause menu. The rest of my issues mainly concern the camera and controls. If you use the touchscreen to play, you move your character like you would in most third-person 3D games. Basically, the whole screen works as an invisible joystick. Objects in the environment that can be interacted with require either a single tap or a tap-and-hold. Then there’s also a button for throwing things. Most of this works fine, though there were occasions later in the game where the joystick wouldn’t respond as expected or I couldn’t react with an item even when the game was telling me to. 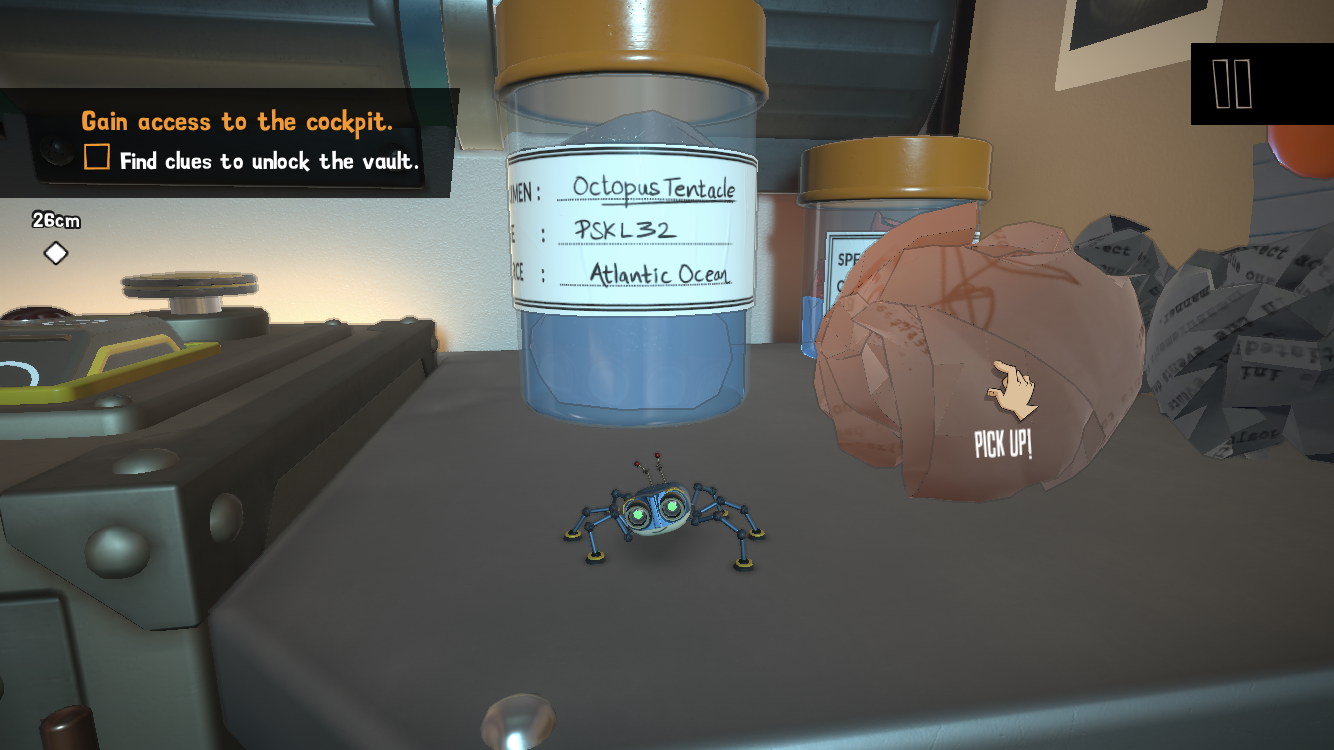 The bigger issue is the camera. Instead of having the left side of the screen for movement and the right side of the screen for the camera, the whole screen is a joystick. Then you use two fingers anywhere on the screen to adjust the camera. This is pretty much impossible if you’re playing on an iPhone, but it’s also clunky on an iPad. Thankfully, you don’t need to adjust the camera constantly, since the game manages much of it for you. But the automatic camera controls can often pull the camera away from where you want it. And the two-finger swipe also makes it hard to look around for stickers. That said, I did manage to complete the game with touch controls, so they’re not a complete dealbreaker. And I do understand, to some extent, why things are the way they are. I noticed the game can be played on Apple TV with just the remote. Again, the camera controls aren’t optimal, but it’s still pretty impressive that it can be completed with such a limited tool. And whatever device you decide to play on, it includes full controller support. I messed around a bit with my PS4 controller and it felt great. I also had much better control of the camera. So at the end of the day, I would like to see the touch controls improved upon, but I can see that they weren’t just thrown together haphazardly. There’s a reason for them, and with Sumo Digital’s track record, I’m hopeful that they’ll improve on them. 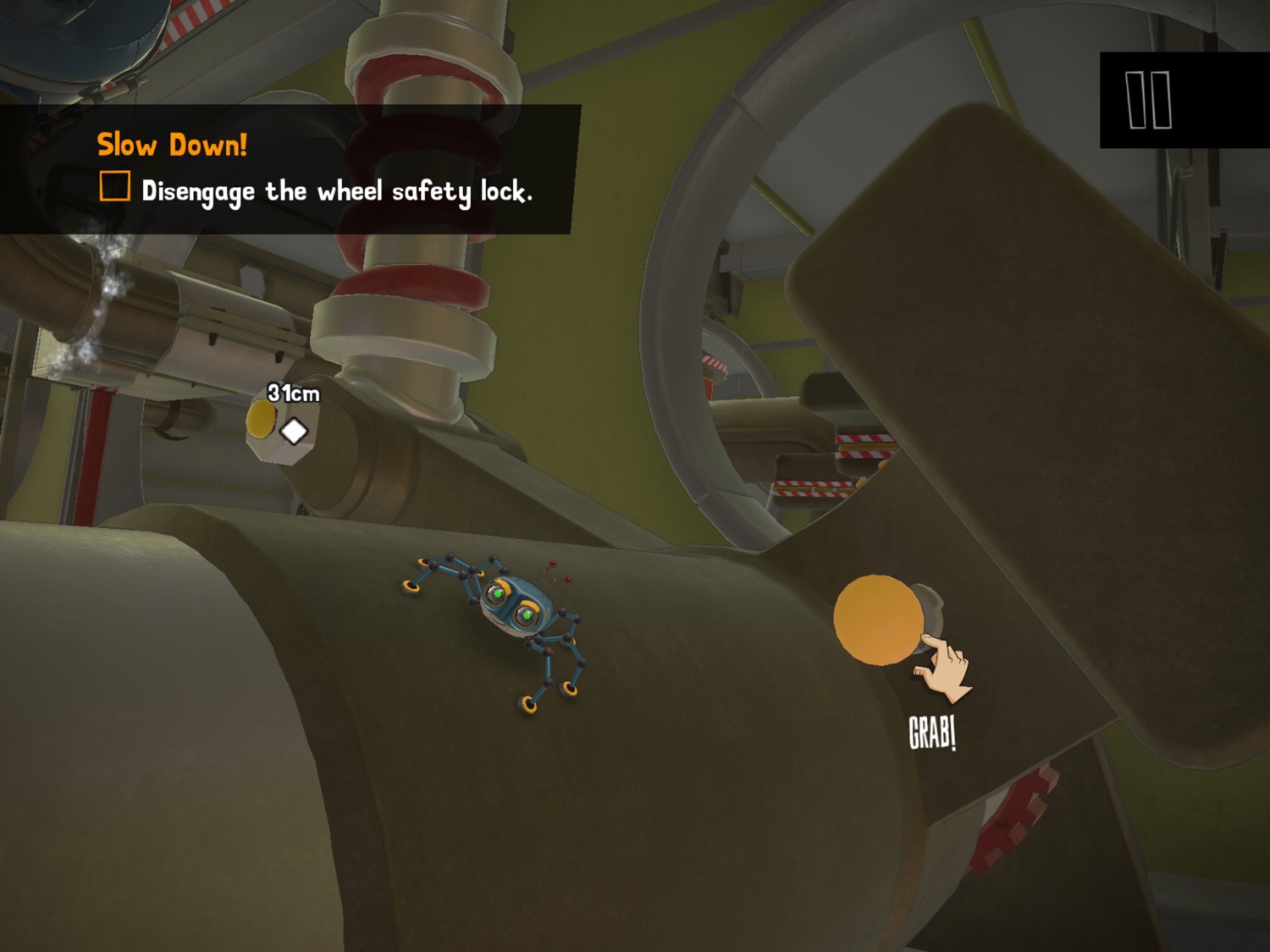 While my experience with Spyder wasn’t frustration-free, it’s one of the few Apple Arcade games that I was eager to get back to every time I took a break. This isn’t the first time a game gave the player a bug’s eye view, but it does so in a way that’s fully realized. Between the varied environments, different tools and missions, and of course Agent 8’s cuteness factor, I can’t think of anyone who wouldn’t find some enjoyment here, no matter the age. Spyder is the kind of game that should make skeptics hold onto their Apple Arcade subscriptions. I hope we see more games like this, and especially more missions. I’ve definitely not had my fill yet of Agent 8. So don’t pass this one up — download Spyder right now and start saving the world.

And if you get stuck anywhere, try my walkthrough guide.