Haiku Games is back with a new Adventure Escape game, called The Sultan’s Inventor. You play as Royal Inventor Zara, who is accused of murdering Sultan Omar. You need to help her prove her innocence! This walkthrough guide should help you if you get stuck on any of the puzzles in Chapter 8. Feel free to ask for extra help in the comments section.

1. Jamal is about to be execute for a crime he didn’t commit! We have to stop it! Pick up the three tiles. Also, move people aside to get the spyglass and screwdriver.

2. Use the spyglass to see some yellow symbols and also a carving of a man fighting a lion. 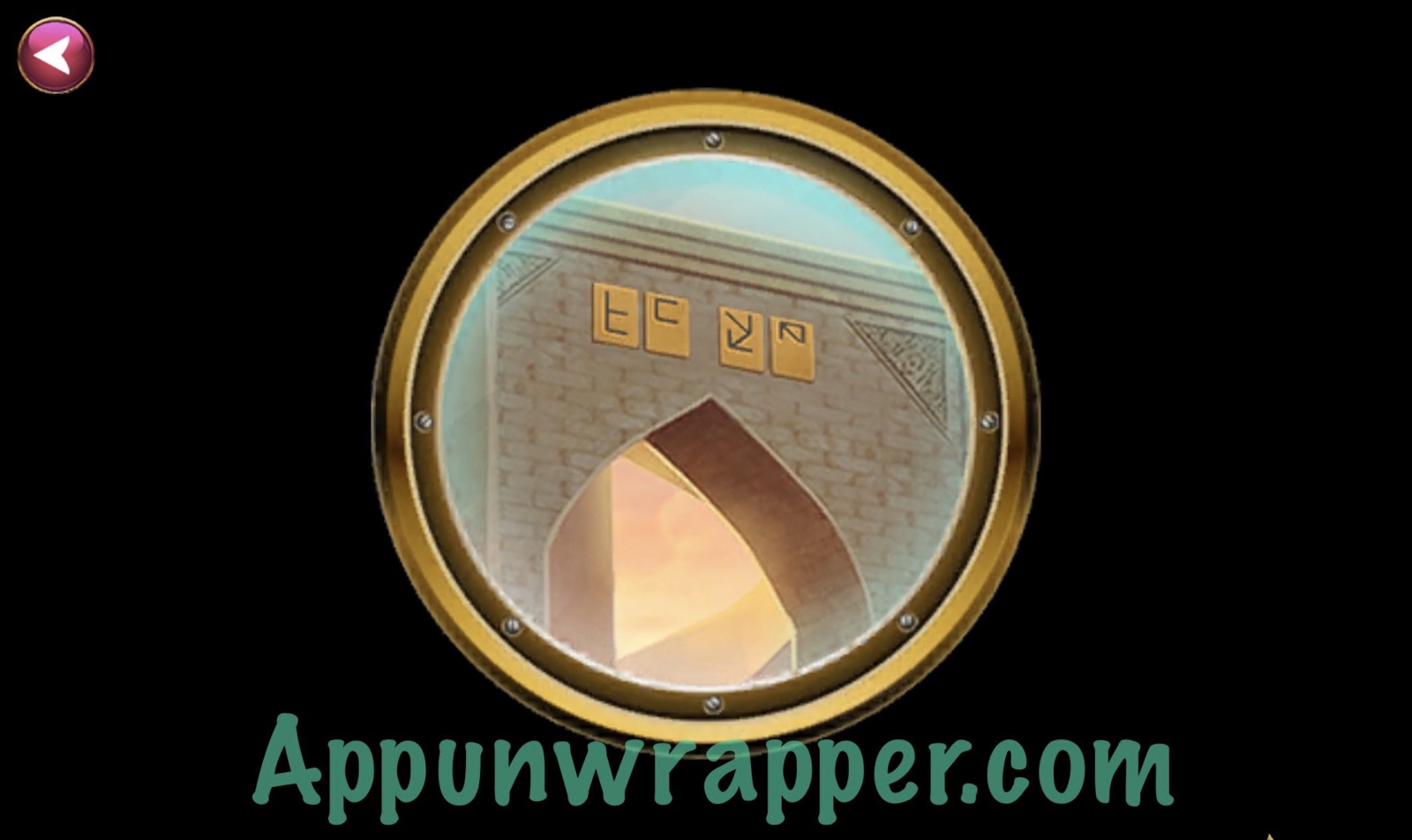 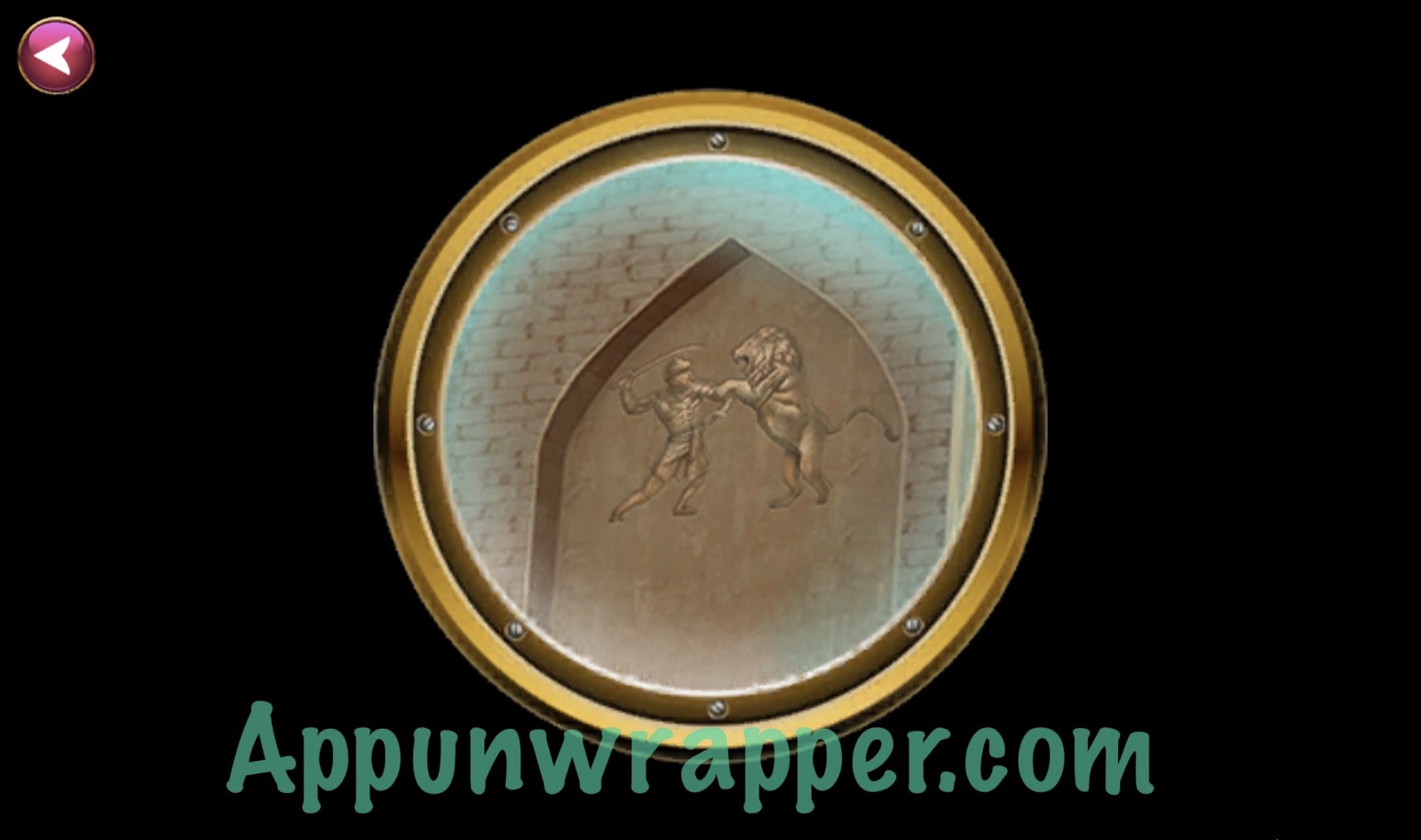 3. Copy that same stance into the statue of a man fighting a lion. It will reveal more strange symbols, this time white. 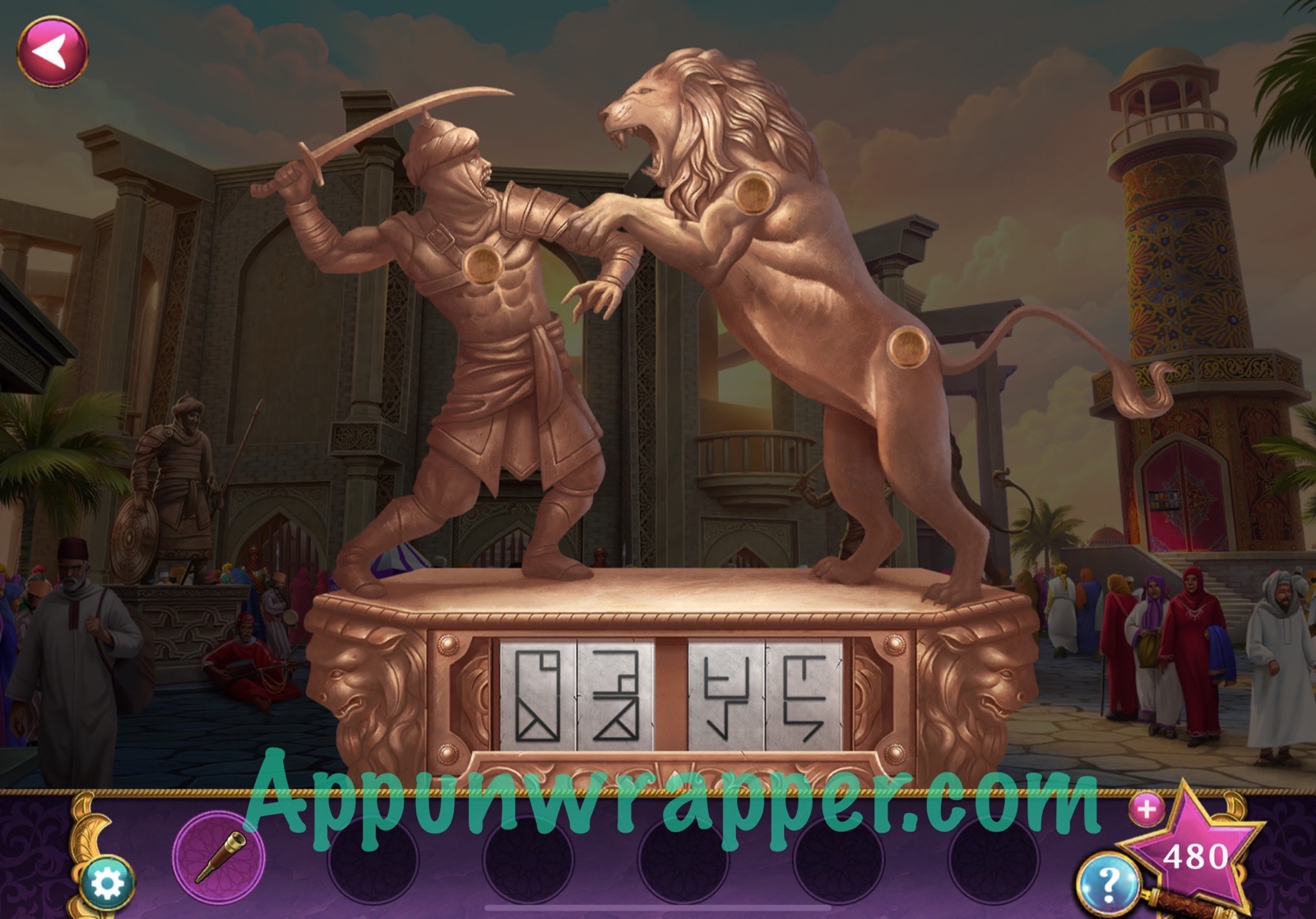 4. Tap on the warrior statue to the left and use the screwdriver to remove the screw in his hand. Now you can turn the shield and see the orange symbols. There’s four total. 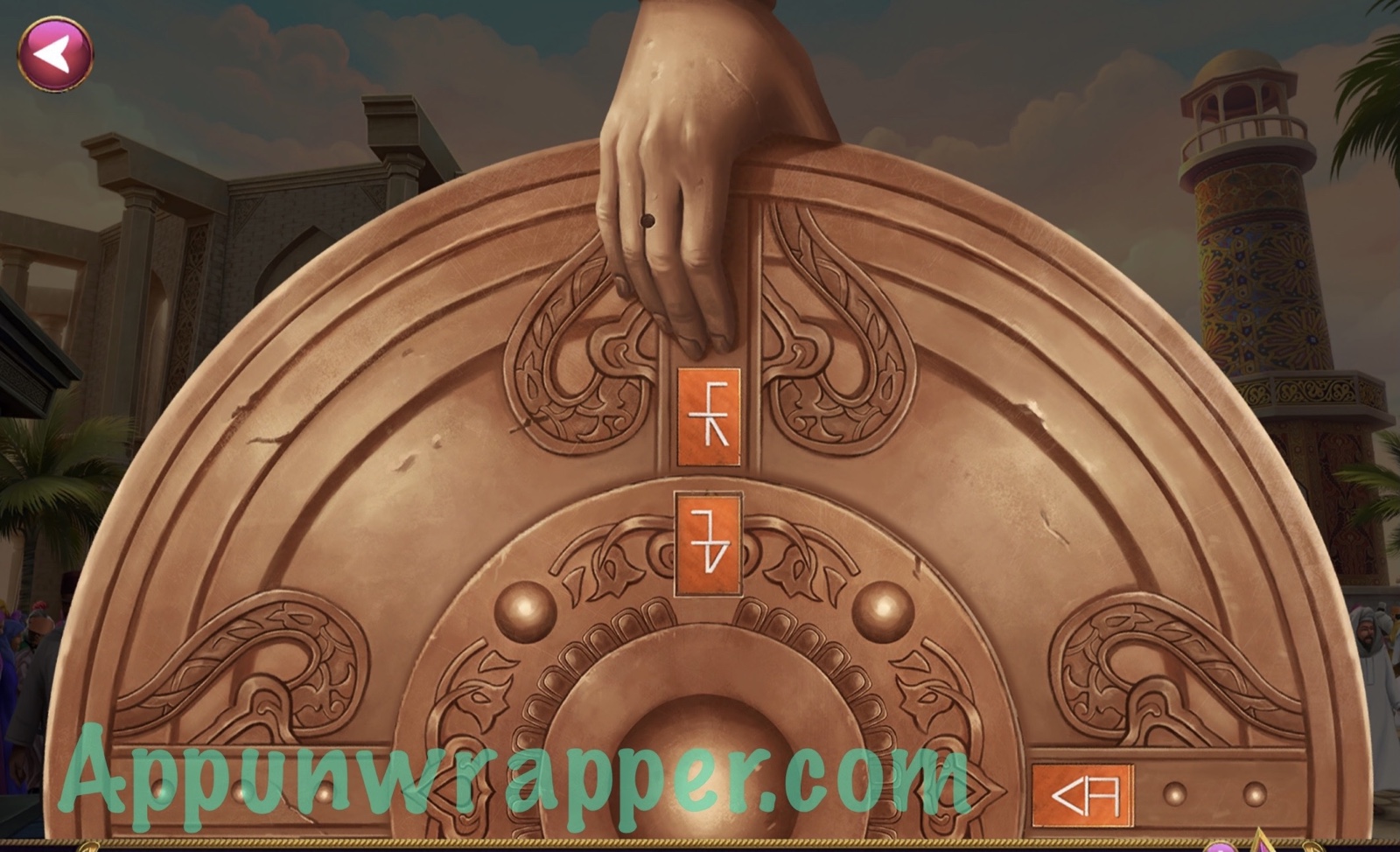 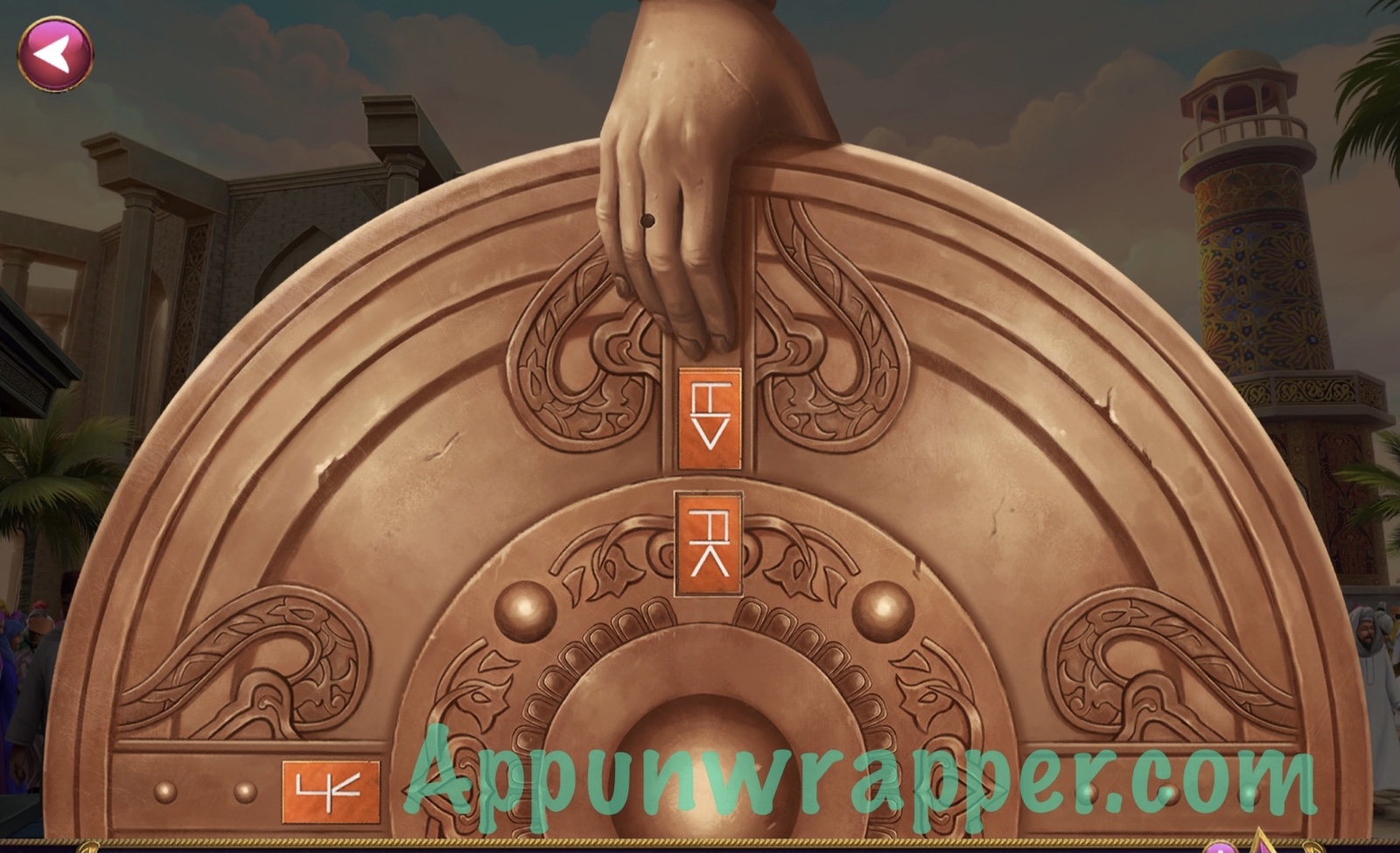 5. Tap on the door on the right. Add the three tiles you found to the lock mechanism. We need to figure out which symbols to change them to. Use all three clues you found. It’s a tricky puzzle. Each pair of symbols tells you the relationship between the symbols, how you should rotate or mirror or fold the first one to get the second. The yellow is the hardest. The white is the easiest, because you can see two clear symbols on the top and bottom. For the yellow, you can see from the clues that you should fold the bottom half of the tile over the top half. For the orange tiles, you can see from the clues that the top half should be mirrored horizontally and the bottom half should be mirrored vertically. For the white tiles, you can see from the clues that for each pair of tiles, the top symbol should rotate clockwise once and the bottom one should rotate counter-clockwise once. This is how it should look in the end: 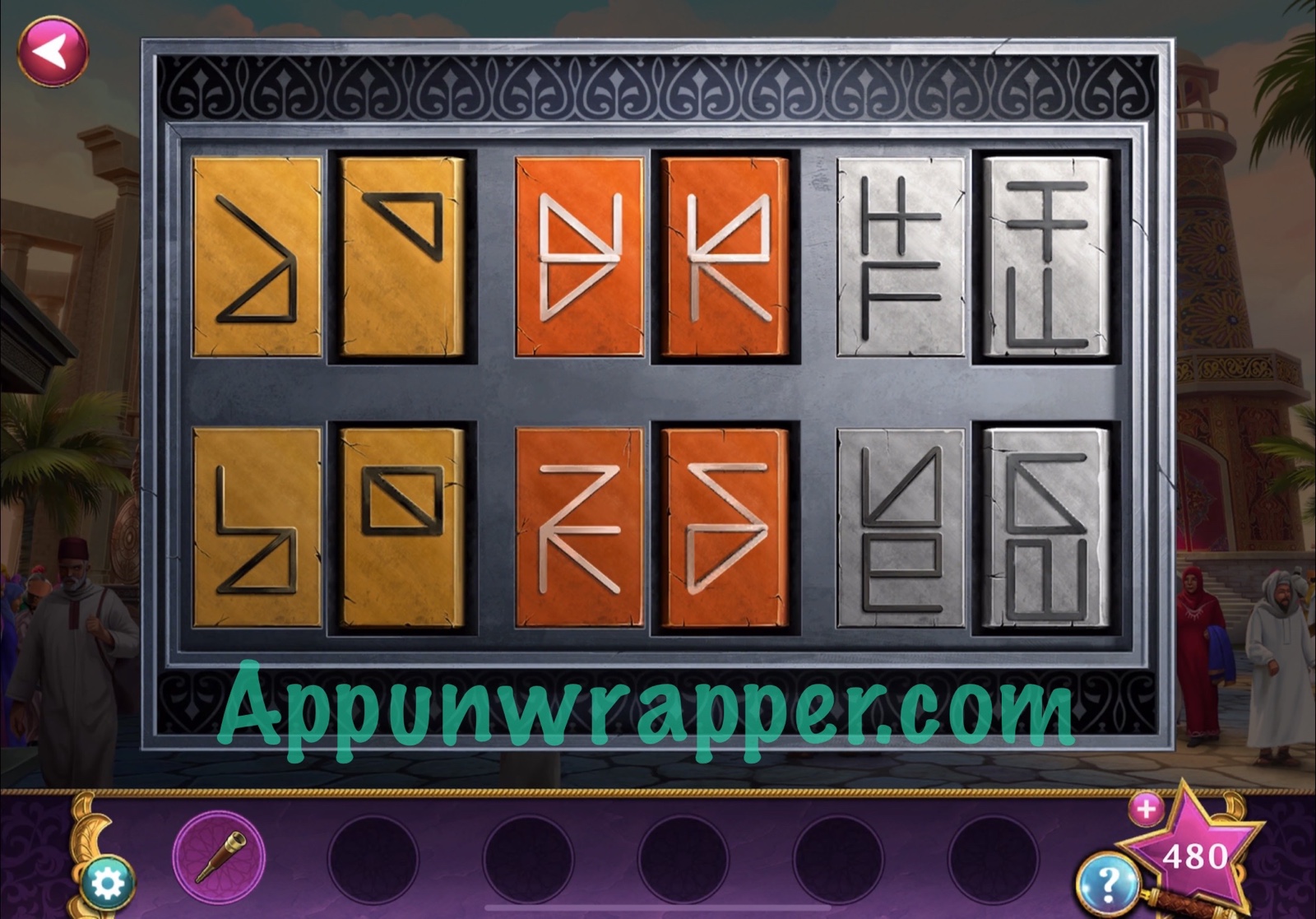 6. Head inside. We need to repair the glider wings! Pick up the jar of oil, the sword, the key, and the rod.

7. Use the oil on the horse’s wheels and move it to the right. Pick up the rod that was behind it. Also, use the key on the locked panel on the wall to see some stone tiles with symbols on them. 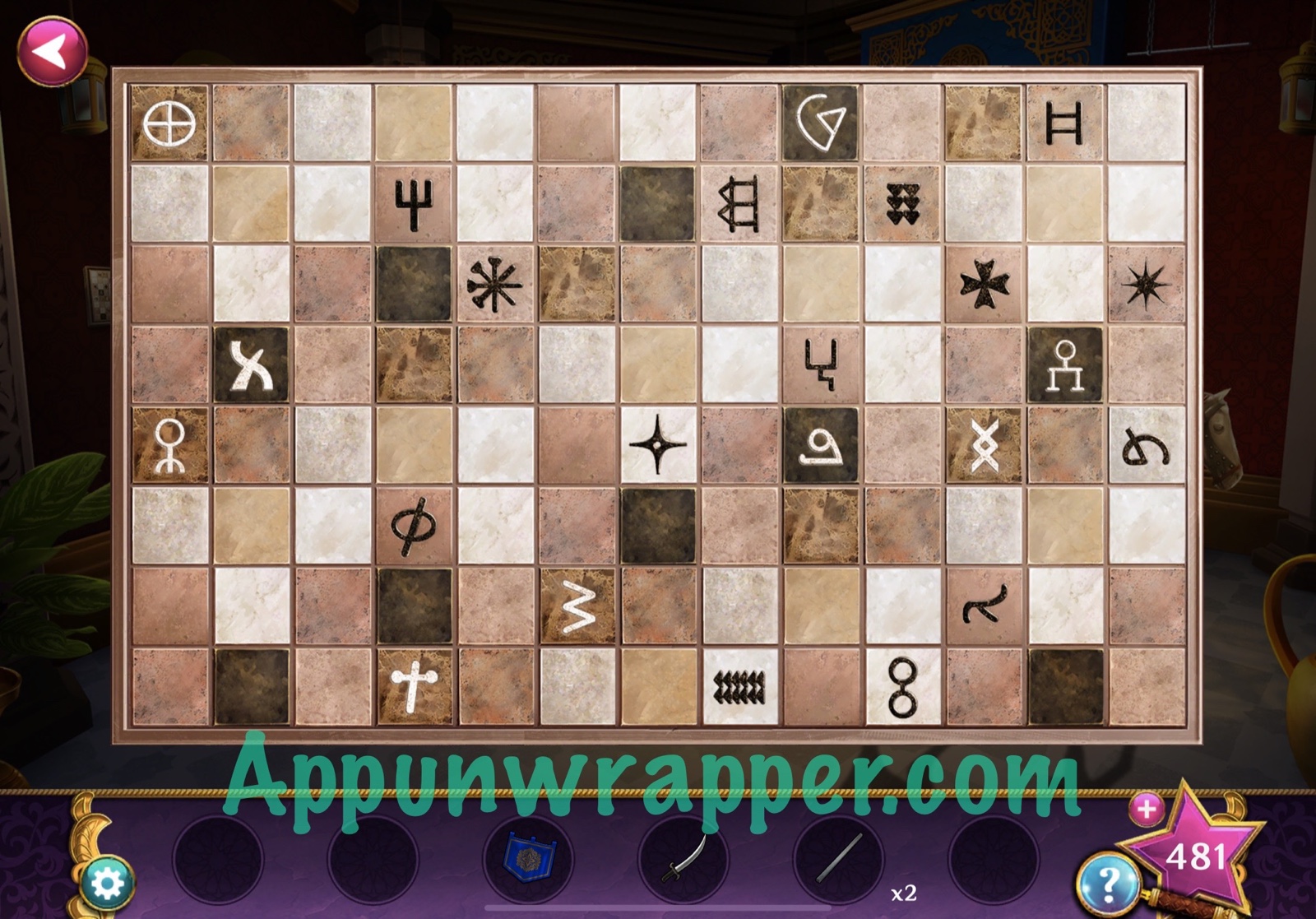 8. Use the sword to cut down the flag.

9. Attach the two rods and the flag to the broken glider.

10. Go back outside and use the knife to cut some fabric from the tent. Then go back inside and add it to the glider.

11. Now let’s work on the elevator. There’s another cryptic lock mechanism. We need to use the clue from the stone tiles to solve it. Basically, find the orange/gold symbol on the wall and then look for a symbol that’s in relation to it the same way the red square is in relation to the orange square. It should look like this in the end: 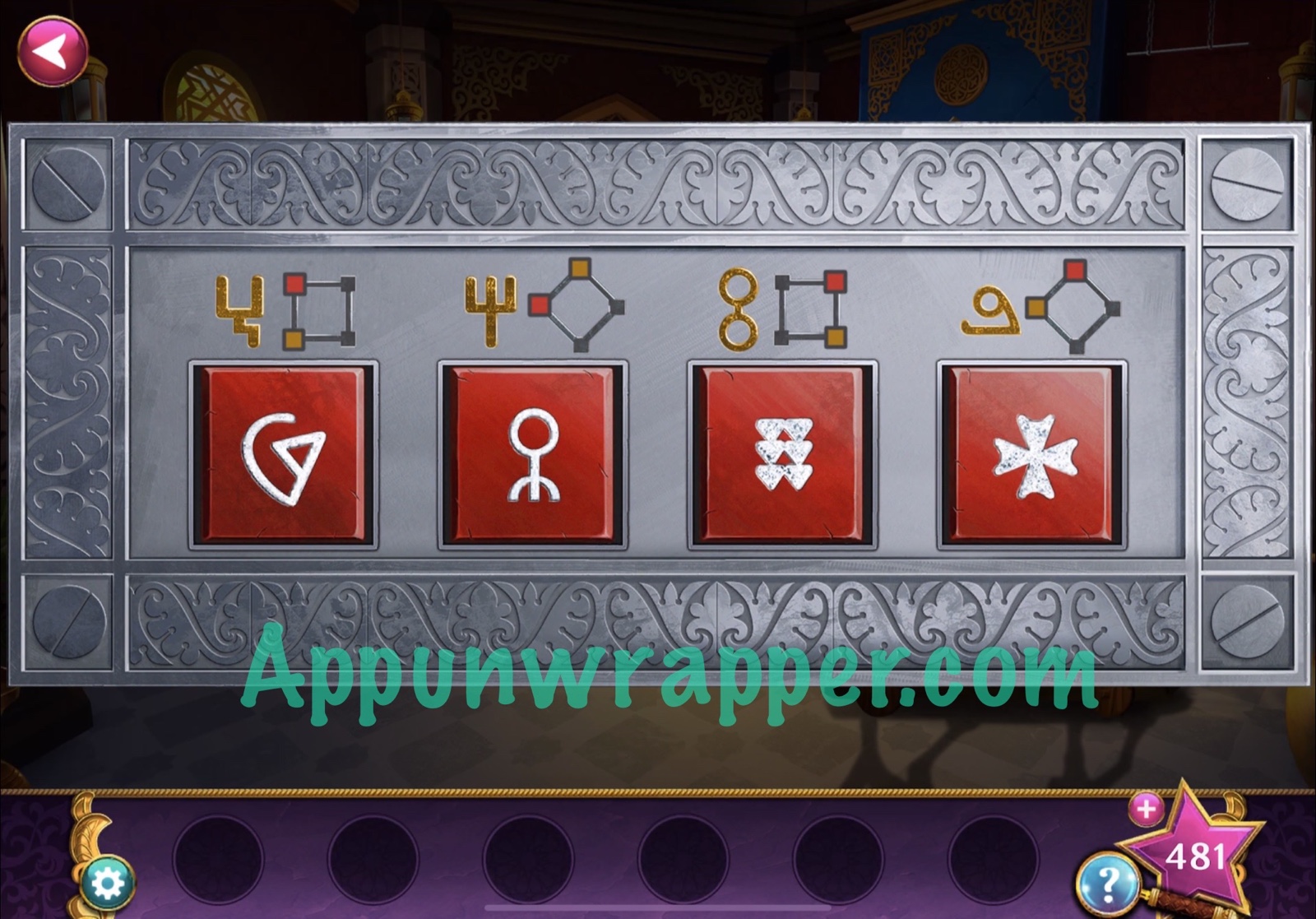 12. Get in the elevator with the wing glider. Now to solve the Hang Gliding Puzzle. Select the image that correctly fills in the missing area of the pattern. Solve 10 patterns quickly to make it to the arena without crashing. You gain altitude with every correct answer. You lose altitude with a wrong answer and as time passes. It’s kind of hard to help with this since it’s randomized each time, but here’s an example:

13. Amira releases a giant mechanical tiger! We have to stop it. First, pick up the purple gem and green gem. Also, press in all seven bricks to open the first jail cell. Take the iron bar from inside.

14. Use the iron bar in the hole between the first and second jail cells to open the second cell. Take the key from inside.

15. Use the key on the third jail cell to reveal a panel. Each square needs to be changed to a symbol. But the crowd is blocking the purple flags we need to see to figure it out. Bang each of the two gongs to attract the tiger and scare the crowd. Now you should be able to see all the flags between the two of them. 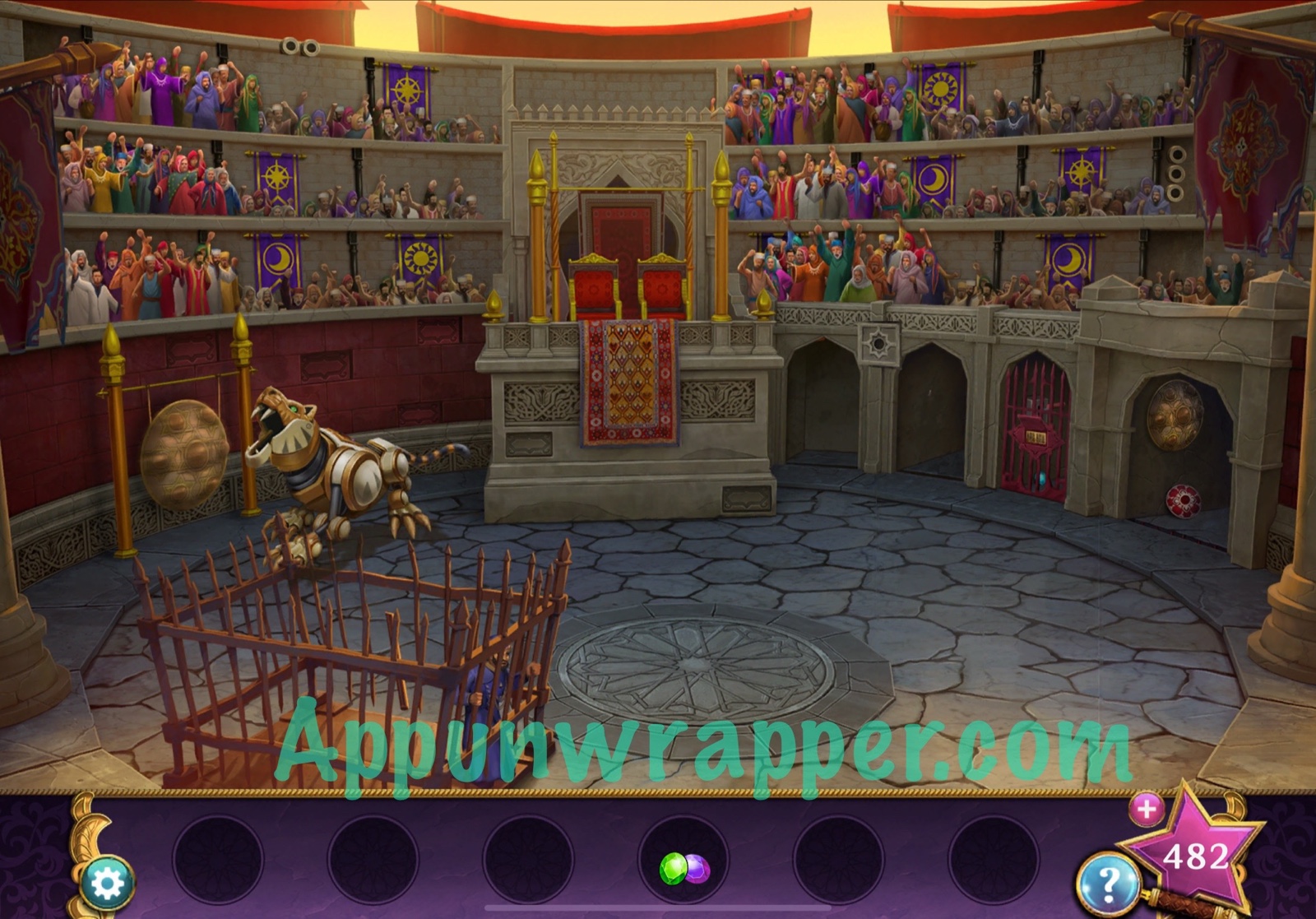 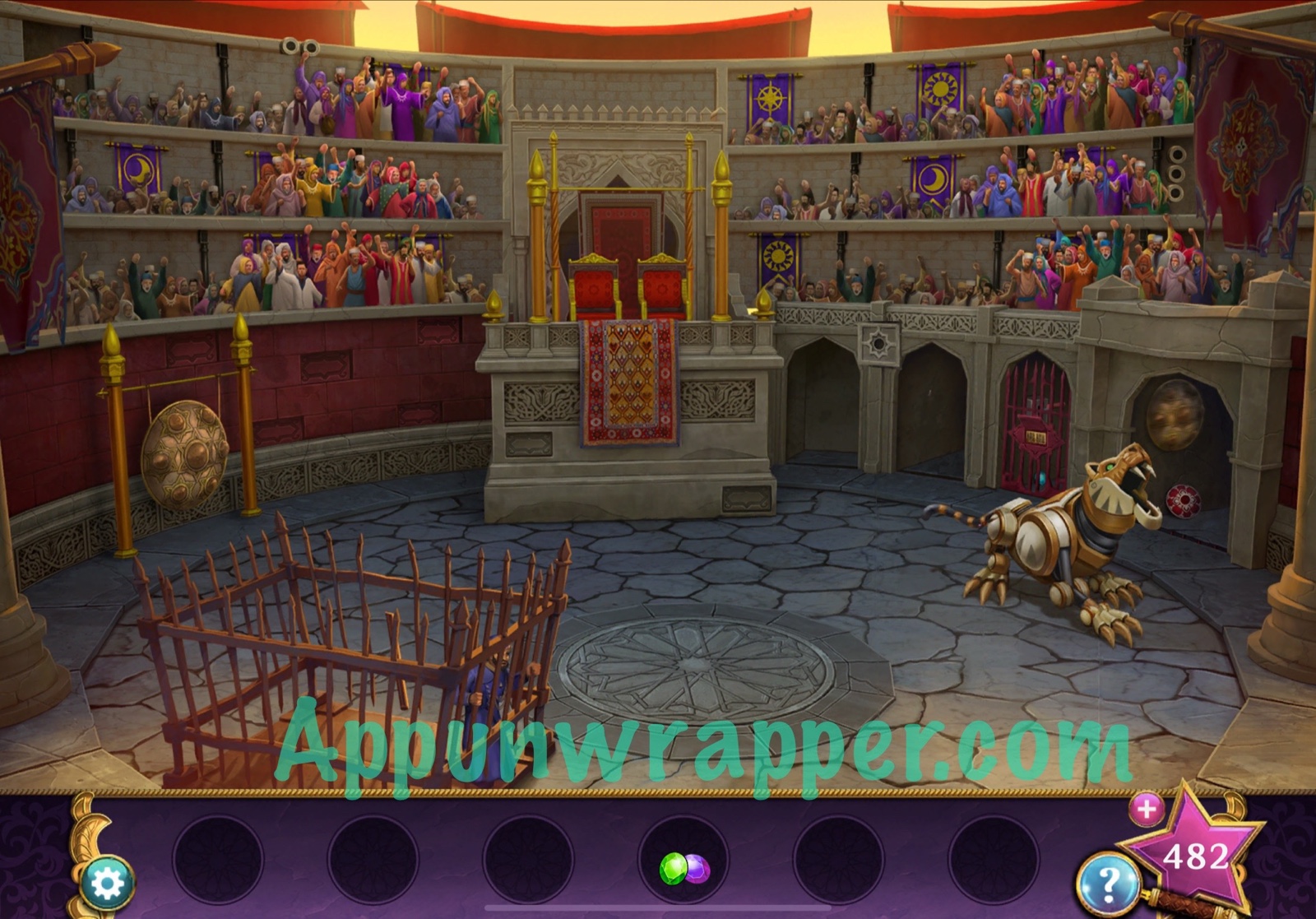 16. Now solve the puzzle on the third cell door. Notice the two dots and three dots in the audience. Those help you figure out the order. It should look like this in the end: 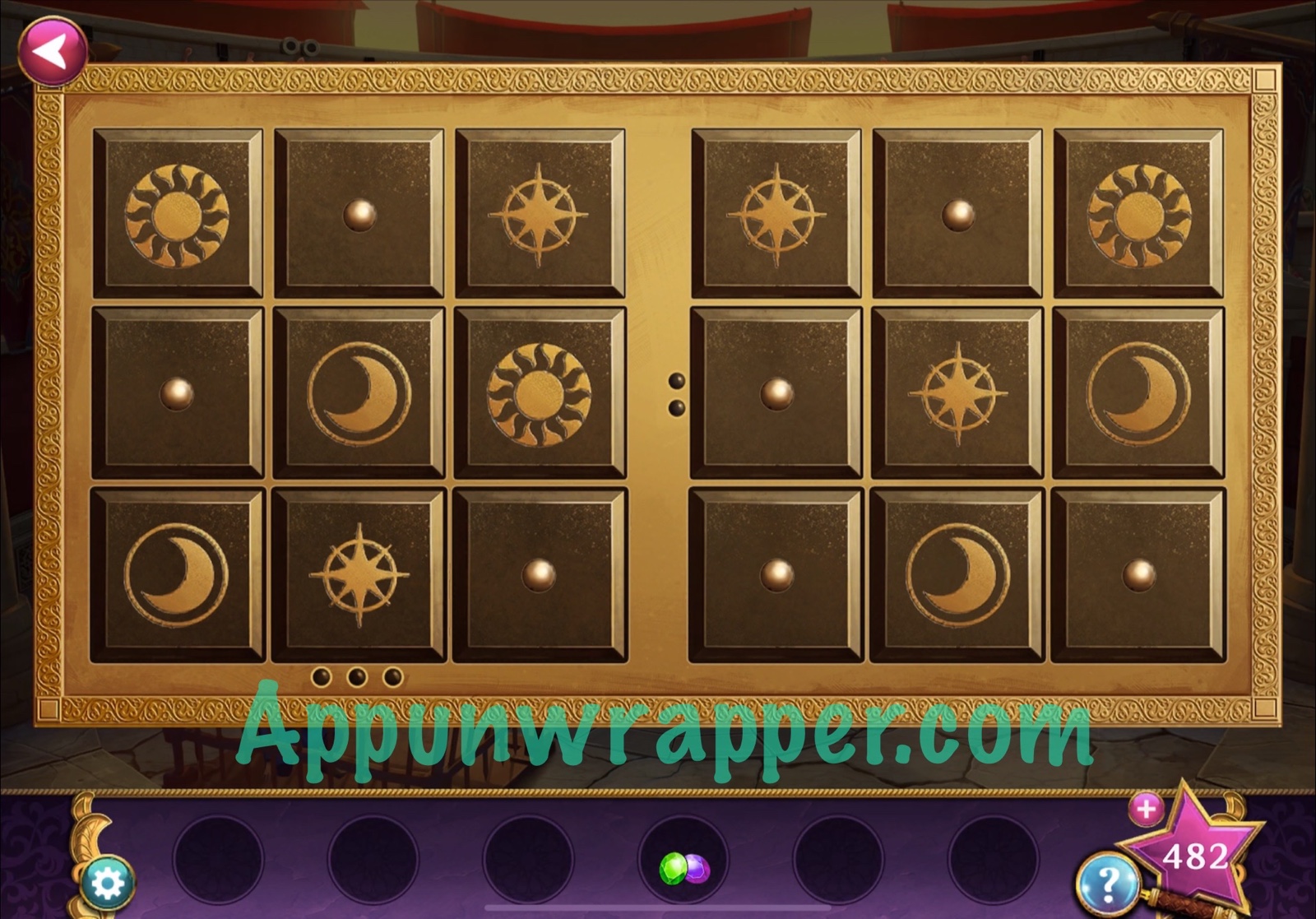 17. Take the blue gem from the third jail cell and pull the lever to drop the tiger into a pit.

18. It’s trying to climb back out! Tap on the panel on its back and add the three gems. Let’s solve the Control Panel Puzzle! You need to drag the black tiles to the board to connect all the same-colored gems. It should look like the image below: 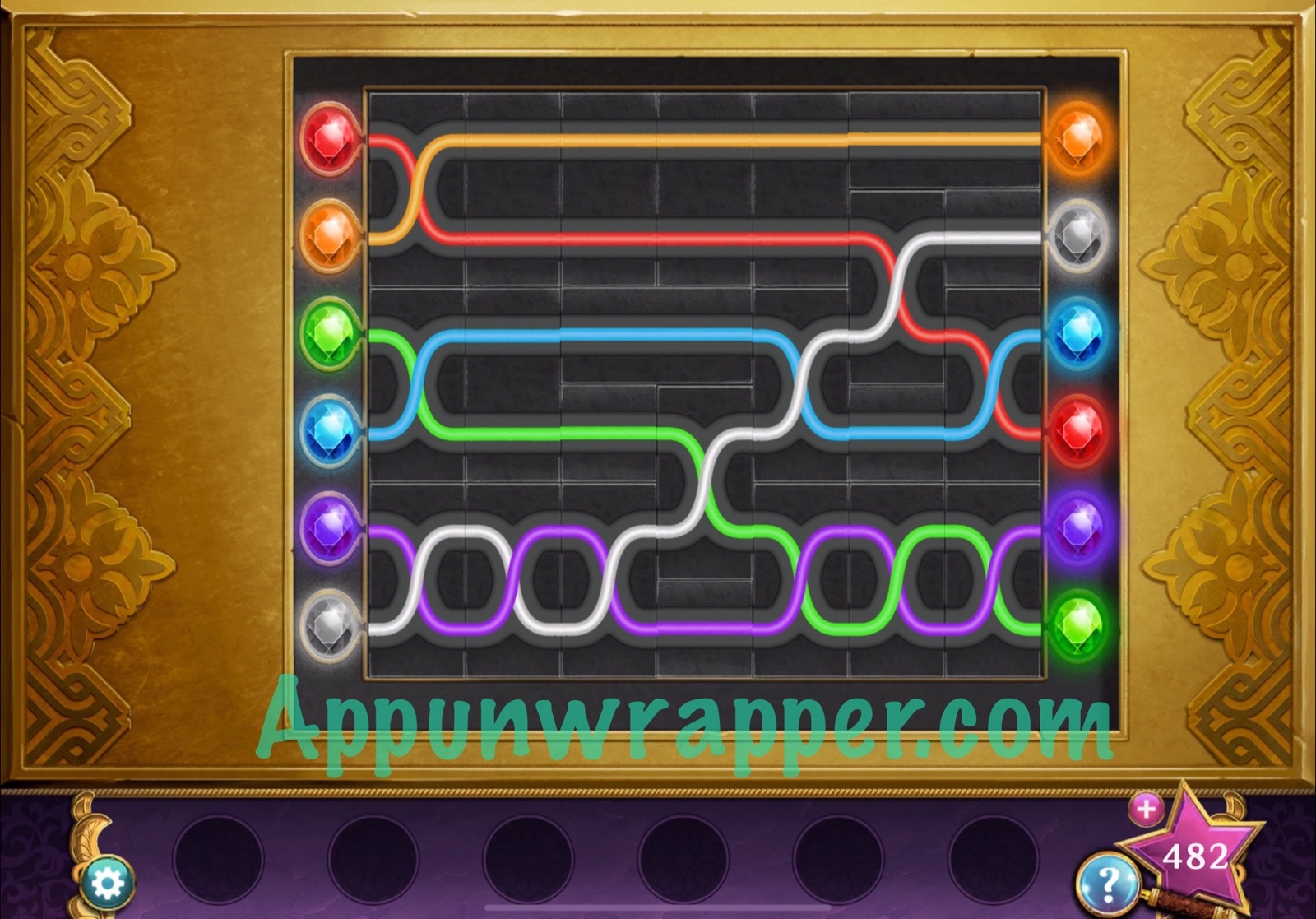