Ever since Snakebird stole my heart with its hardcore but user-friendly puzzles, I’ve been hoping that more PC puzzlers would make their way over to iOS. I’m still waiting on Stephen’s Sausage Roll, as I’m told it’s the gold standard. But another one that’s been brought to my attention a few times is Pipe Push Paradise and, out of the blue, a mobile port was announced a couple of weeks ago. I was lucky enough to get it ahead of release and complete all but the final, extra challenging puzzle. And I’m pleased to proclaim that this is a perfect portable port in every possible way, and a game that all people with preferences for puzzles should be playing.

Pipe Push Paradise has you taking on the role of a very quiet girl visiting an island in serious need of a plumber. Your uncle used to do their plumbing, but he’s been asleep for months and everyone else gets tired real easily. Basically, you’re the only one willing to do any work around here, so they’ll even overlook your rude silence. Luckily, the work is enjoyable, especially since you’re not actually pushing those preposterously prodigious pipes around, but instead just swiping your finger against the screen. So you, too, can avoid any hard manual labor. The story is slim, but it adds a little extra character and something to look forward to between puzzles. I like the quirkiness and absurdity of it. Even though the game would be perfectly fine without a story, there’s something nice about being cheered on by the strange island folk when you solve a particularly perplexing puzzle. 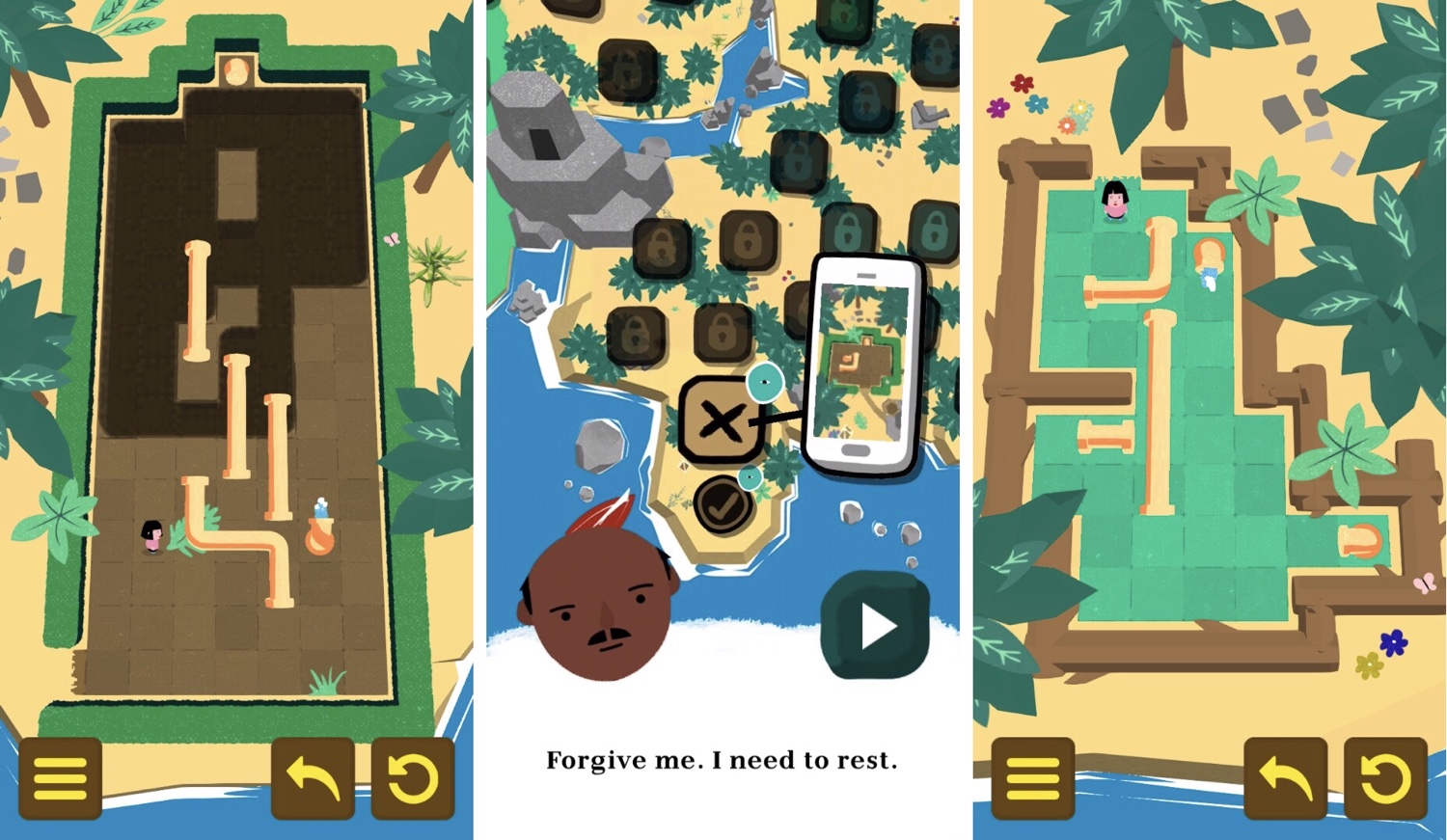 The game’s island is broken up into fifty pipe-pushing puzzles, where the goal is to get the pipes connected so the water coming from the opening can reach the exiting pipe. Pipes can’t be pulled, so you need to navigate them in a way that they won’t get stuck in a position where it’s impossible to move them where you need to. The game doesn’t waste any time, as in the second tutorial level you’re already being introduced to the elbow pipe, which can either be pushed flat or rolled so that part of it points upward. It all depends on how you push it and, even though I found it slightly confusing at first, before long it felt like second nature. Pushing pipes together also affects how they move and you need to experiment to learn all the patterns. The game only holds your hand through the bare basics and the rest is up to you. There’s also the extra twist in that your character can’t get trapped in the room. In order to truly complete a level, she has to be able to get to the door. This can be an added challenge in some levels where the most obvious solution would prevent her from getting out. There’s even an early puzzle that demonstrates this so there’s no confusion later on. 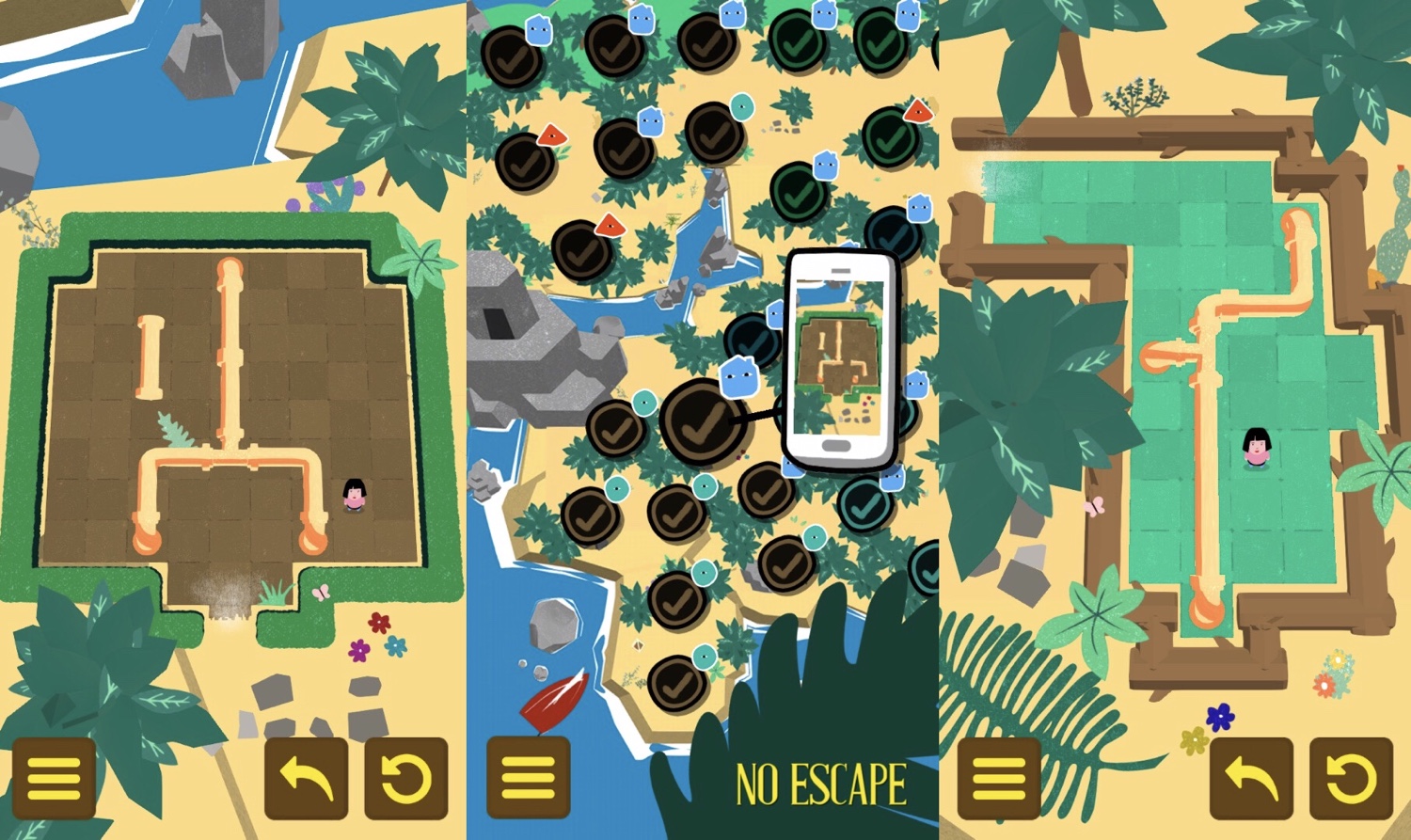 The world map is split into color-coded areas that each introduce a new mechanic, such as double-elbow pipes, rotating tiles, raised platforms, pitfalls and magnets. There’s no way to get injured in the game, but it won’t allow you to walk into holes — and pipes can fall into them — so you’ll have to find ways to work around them. Each section has one easy level to introduce the new mechanic, and if you solve it, you can unlock the rest of that area. This means you can have access to all the puzzles except the final one, which demands that you first master the rest of the game by solving all the other levels. I’ve always been a fan of this kind of freedom in puzzle games, as one player may find certain puzzles easier than others. When forced to play in linear fashion, people are more likely to quit or resort to a walkthrough to continue playing. This way, there’s no reason to do that, as if you’re stuck you can just try another puzzle. 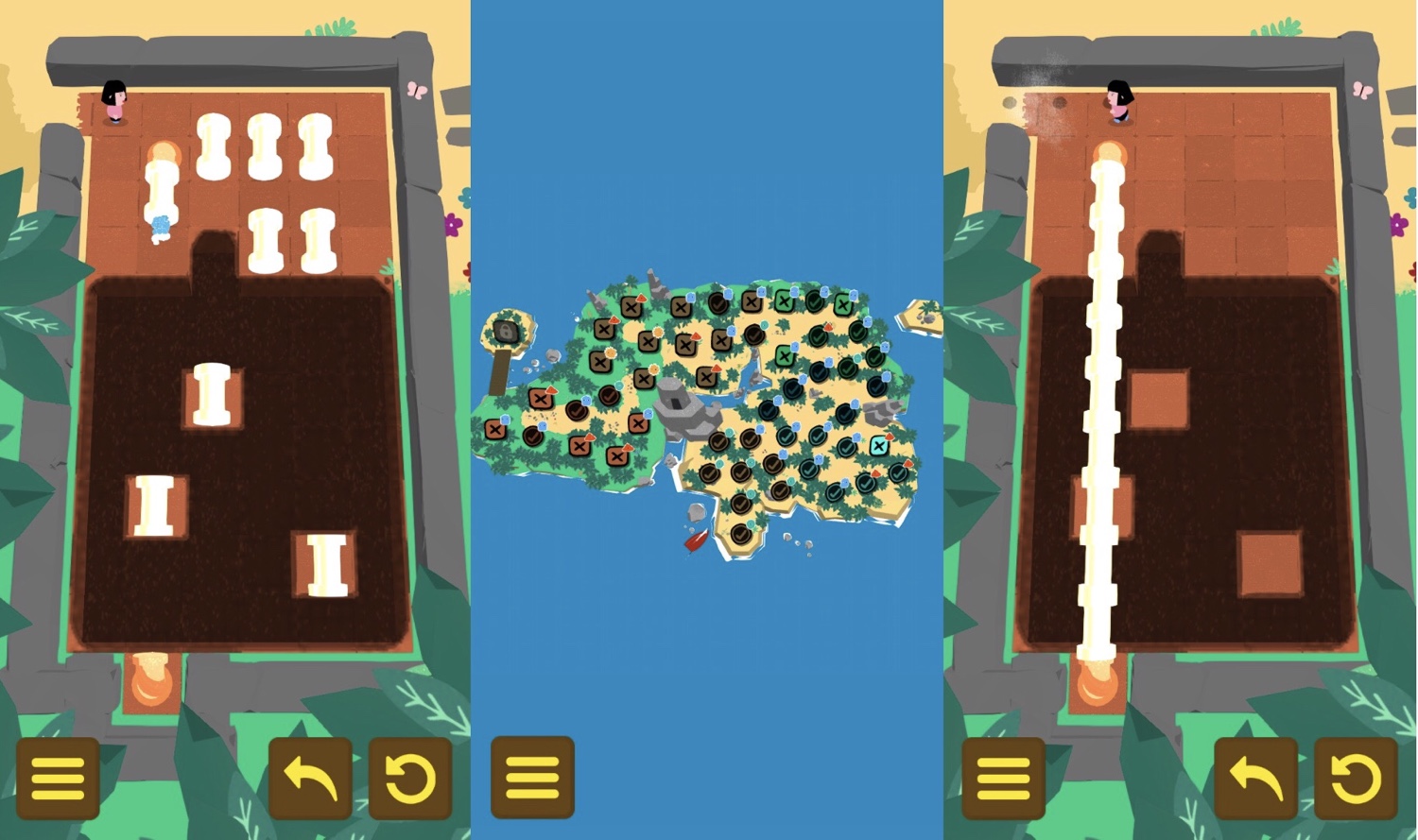 This is a game without filler, so almost every one of the fifty levels will provide some challenge. Puzzles are marked with indicators that tell you if they’re easy, medium, hard or expert difficulty level, so you can leave the hardest for last if you’d like. I found the game intimidating at first, but the more I solved, the more confident I felt about my knowledge and ability to complete the game. Like any good puzzler, it teaches through play rather than hand-holding. So you might be hitting your head against a puzzle, then solve a different one that teaches you something that helps you toward the one you were having trouble with. I’m amazed when replaying some levels how quickly I can solve them now compared to my first time. Perhaps I have a promising future as a professional plumber, after all. 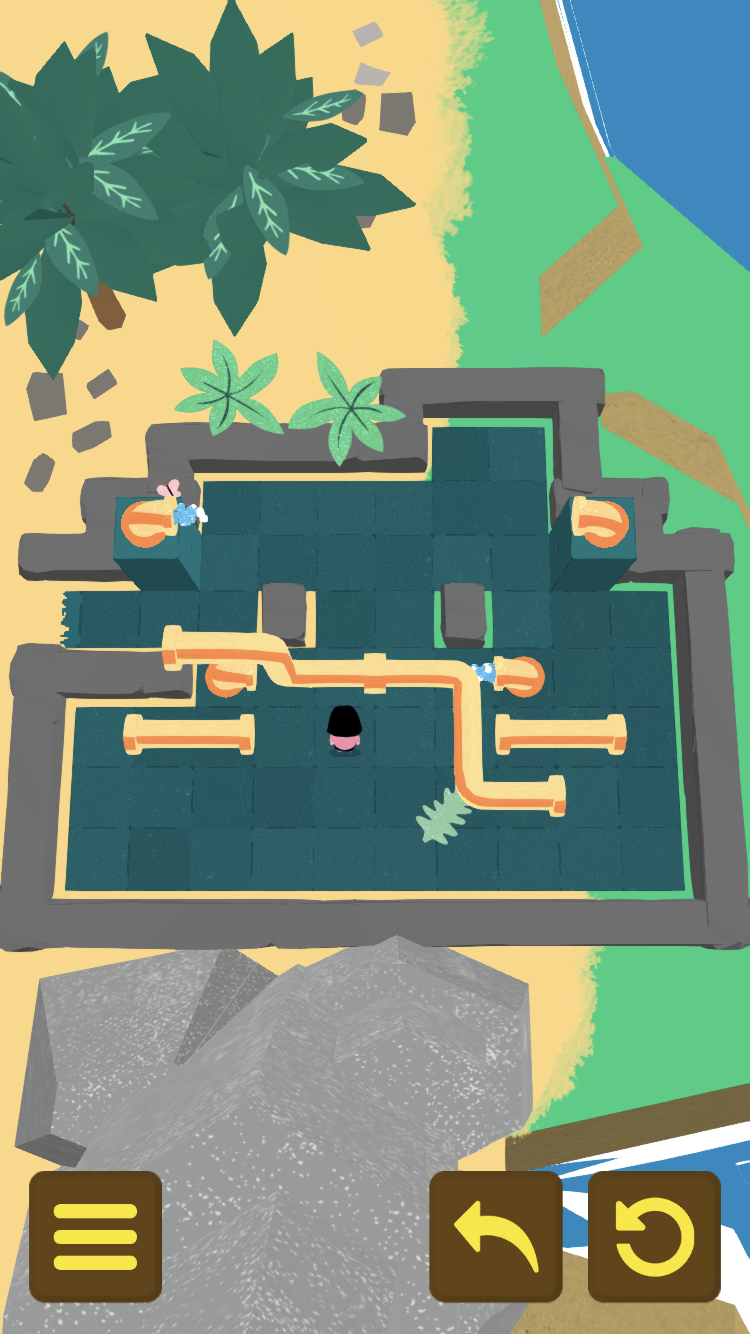 All this is great, but what makes Pipe Push Paradise such a pleasure to play — and the difference between me sticking with it instead of pushing it aside for other games — is that it was painstakingly redesigned for portrait mode on mobile. It’s obvious that the developer, Corey Martin, has played puzzle games on his phone before and knows what it should feel like. He could have taken the easier route of keeping everything in landscape mode like it is on PC and just reworked the controls a bit for touchscreens. Instead, he rotated the puzzles that could be rotated and redesigned those that just didn’t fit right. The result is a game that can easily be played with one hand anytime and anywhere. So instead of playing Slydris 2 while perched on plush pillows in bed like I usually do, I would try cracking one more plumbing puzzle. I could also painlessly play while pecking at food or perambulating around the city, instead of having to wait for when I’d have both hands free. The only big difference is that the meta puzzle has been removed to make it a better fit for mobile. Instead of walking between levels and pushing a pipe around the map, you just tap on the level you want to play. Even though I’m sad to be missing out on the meta puzzle, I’m glad the level select screen has been simplified. 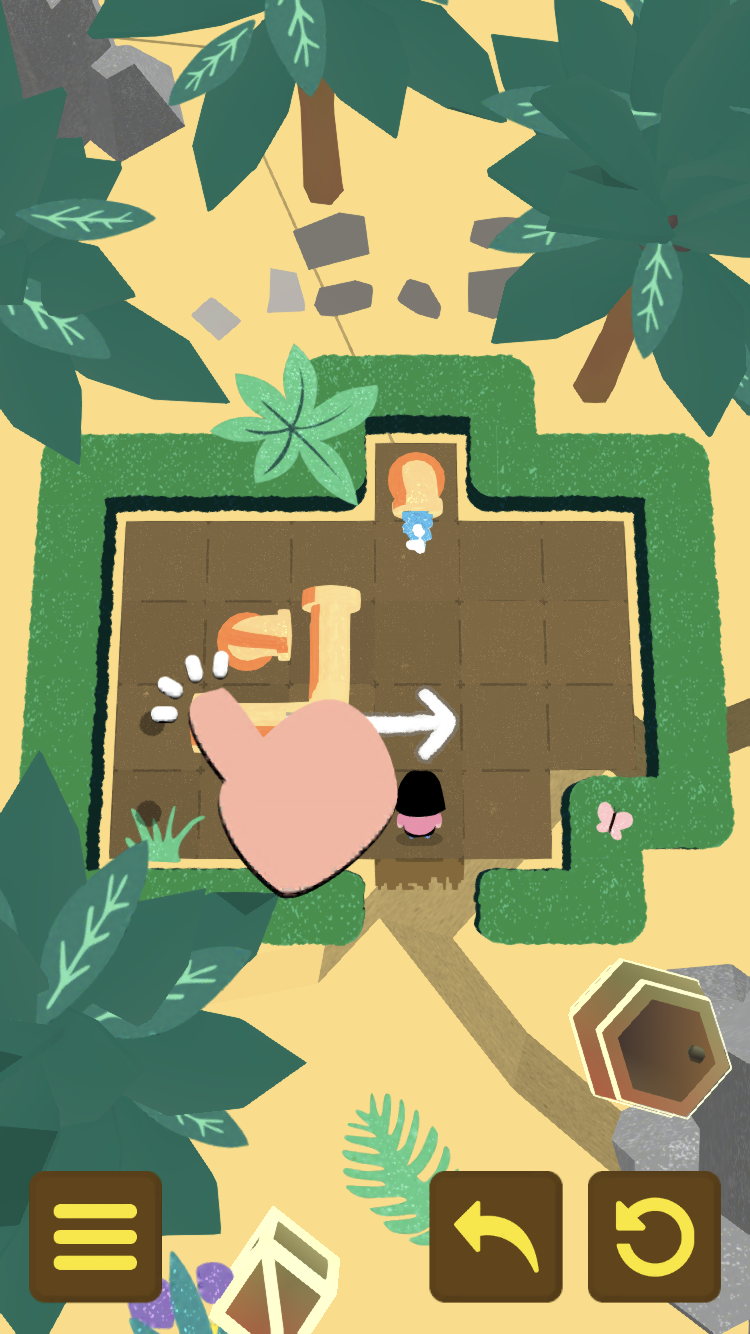 The controls are also very mobile-friendly. I found them a little weird at first, as it’s the kind of game I where I would think you’d just swipe anywhere on the screen to move, like in Snakebird. But once I got used to it, I realized it’s actually a lot better because it saves you so much time. Instead of telling your character every single step she should take, you tell her which pipe to push where and she automatically runs over there and does it. You just watch instead of getting carpal tunnel. It’s similar to the controls in A Good Snowman is Hard to Build. On top of that, there’s an unlimited undo button, and it even lets you undo a restart, in case you hit the button by accident. That’s something even Snakebird didn’t offer, but it is a welcome addition. Pains have been taken to make this game as user-friendly as possible with all the quality of life features I could think of. The only one lacking is iCloud, but I don’t even mind that since it’s a portrait game and I’ve no reason to switch to my iPad at home.

It’s so refreshing to be able to review a game without any complaints. Every little detail has been thoroughly examined to make sure this is both a satisfying game and a painless, pressure-free portable port. The result is a game that feels designed by someone who plays mobile games himself, and is aware of all the annoying little things that could get in the between the player and the game. The mobile version of Push Pipe Paradise is a polished passion project that sets the bar high and should be a lesson for other developers in designing the the perfect portable puzzler. If you want a puzzle game that respects both your time and intelligence, you’ve come to the right place. So stop stalling and press here to purchase the positively perplexing, premium, palatable, playful, pocketable, praiseworthy, plumbing puzzler, Push Pipe Paradise.

I Am Dolphin: Become a Dolphin in This Upcoming iOS Simulation Game