Baba is You is a ridiculously innovative puzzle game where you push words around like blocks and see how they interact with each other. Sadly, it’s not available on iOS yet, but it’s a testament to how much I’m enjoying it that I’m willing to play on my PC. I’ve been recording my playthrough, but I also started making straight walkthrough videos for those who don’t want to watch me figure things out. This page will get you through all the levels in the Deep Forest area. Click on the links for the other areas if this isn’t what you’re looking for. If you need help with levels I haven’t added yet, feel free to ask for extra help in the comments section.

I’ll be adding a video once I’ve solved all the levels in this area. Until then, you can use my text instructions.

First, push IS and PULL up under BELT to make BELT IS PULL. Then get next to the belt and pull it out. Get to the right of it and pull it all the way right, inside the head maze. Then push PULL to the right and up and push TREE up to make TREE IS PULL. Do the same thing with the tree that you did with belt. Pull the tree past the belt and then up and onto the mushroom/fungus. The mushroom will turn into a flag. Pull the tree off of it and then touch the flag to win.

This one is a little annoying, mostly because if you mess up and realize it near the end, you pretty much have to just restart. First, push Baba through the belt pointing up and stop when there’s just one space between him and the trees. Push Baba left so he’s left of BELT. Keep him facing left. Go back through the Down belt and push IS and PUSH up to make BELT IS PUSH. Push the left belt down and in line with the right one, but make sure it’s facing right. It should line up with the IS in BELT IS SHIFT but be at the very bottom of the hedge. Next, push the other belt so it’s to the right of Baba, lined up with the bottom belt and facing down. Make BABA IS MOVE and then, as Keke, head up past the reed and wait (spacebar) for Baba to open the door for you. Head out and touch the flag to win!

First, break up DOOR IS SINK and make DOOR IS PUSH. Then push the door down. Now, make sure you still have DOOR HAS TREE and make DOOR IS SINK. Press spacebar to wait. The skulls will sink the door, turning it into a tree, and one skull will be gone as well. Now make TREE HAS TREE and then TREE IS SINK. Press spacebar to get the trees to sink all the skulls until you have one skull left. You can break up TREE HAS TREE for the last one and just do TREE IS SINK. Let both the tree and last skull disappear. Then make DOOR IS PUSH and push the door down. Touch the key to win!

Push the belts to the right to break up WALL IS STOP. Now you can walk through the wall. But you can’t touch the flag yet. Push IS and PUSH over to make FLAG IS PUSH. Make sure you don’t break up BELT IS SHIFT. Now just push the flag onto the belt and it will come back right onto you! That’s it!

This isn’t too bad. Push both flags down so one hits the belt going down and the other lands on the bug. Go around the left side and through that belt and push WIN right. Now just do the same for the other two belts using the words FLAG and IS for one, then IS and PUSH for the other. Now you can go through both belts and push WIN down and over to make BABA IS WIN. Touch Baba to win!

Make IS KEY AND BABA, then add ROCK to make ROCK IS KEY AND BABA. Now the rock will turn into both Baba and a key! Make KEY IS PUSH (or KEY IS YOU) and then use the key to open the door. Sink one Baba in the water and send the other one through the gap to touch the flag and win!

Push BELT and IS right over the belt to make BELT IS UP. Now push all three words left over the belt. Make BELT IS RIGHT. Then push RIGHT onto the belt that leads up to words like FLAG and WIN. It should move to the right. Keep it at the very bottom of the belt. Push the rock onto the belt next to it and leave it there. Push BELT and IS left through to the next room. Push BELT up to the right of the belt that leads to the flag. Push IS up under it. Then go get UP and push it onto the belt. It should join the other words, making BELT IS UP. Now the belts all point up again. The rock should start traveling up. Get on the belt yourself and head to the flag. Wait for the rock to push IS up to make FLAG IS WIN. Then touch the flag to win! 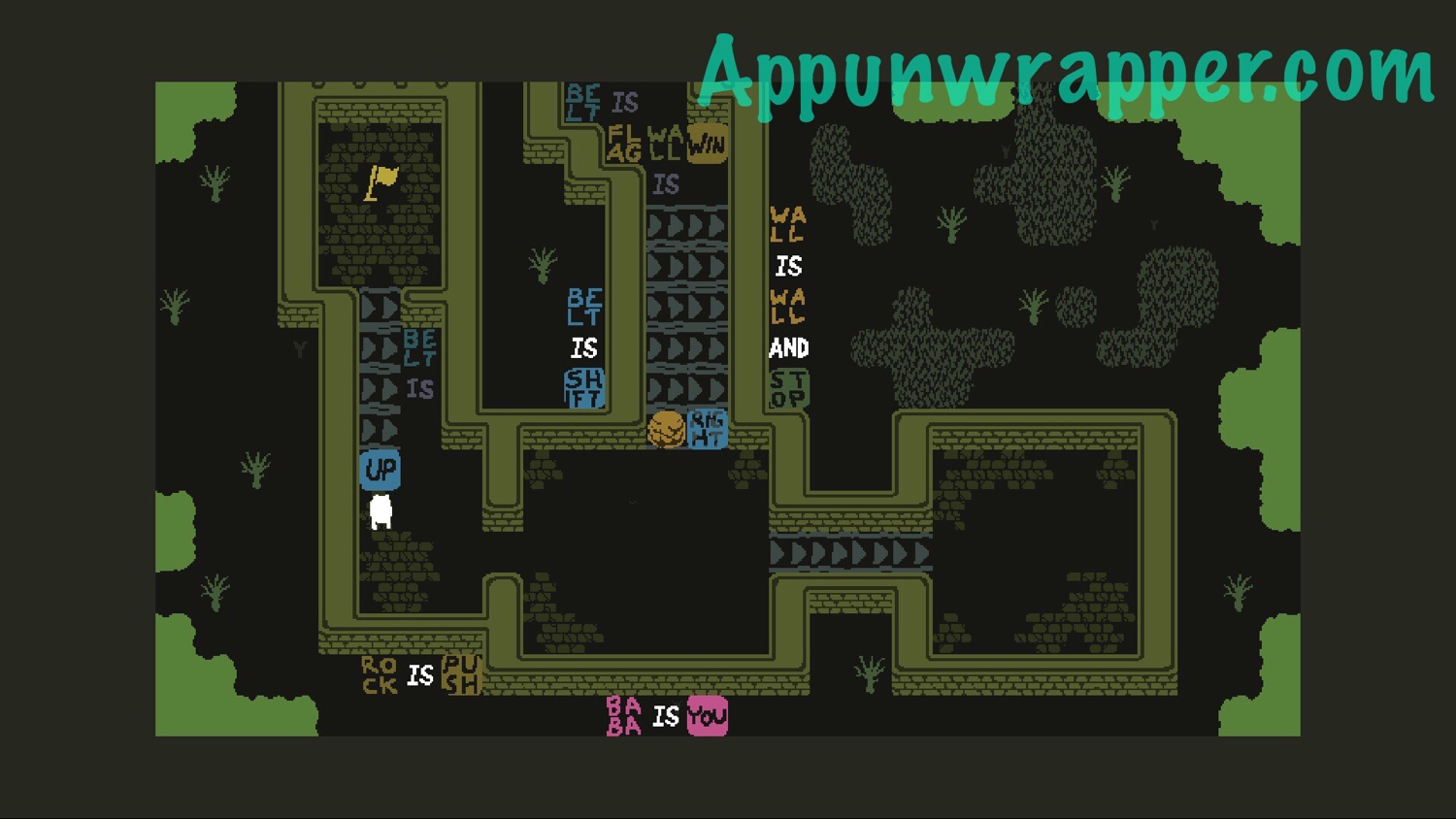 This was tricky! First, break PUSH off of BUG IS PUSH. Then push BUG IS all the way up. Make BABA IS SHIFT. Move the belt to the left and down, in line with FUNGUS, but not too close to it. Push it right just to get it facing that direction. Then go up onto the bug, then right. Now you should be to the right of the bug and can push it left. Push it down onto the belt. Make sure it’s also facing right. Now, this is very important. Move SHIFT up to the opening where you see the mushroom. Place SHIFT directly to the left of the opening. There should be a gap between BUG IS and SHIFT. Now, push BELT and IS right before the gap. Get under SHIFT and push it up. Now you should have both BUG IS SHIFT and BELT IS SHIFT. Head up next to the heart and then press spacebar to wait for the bug and belt to push LOVE over and make LOVE IS WIN. Touch the heart to win! 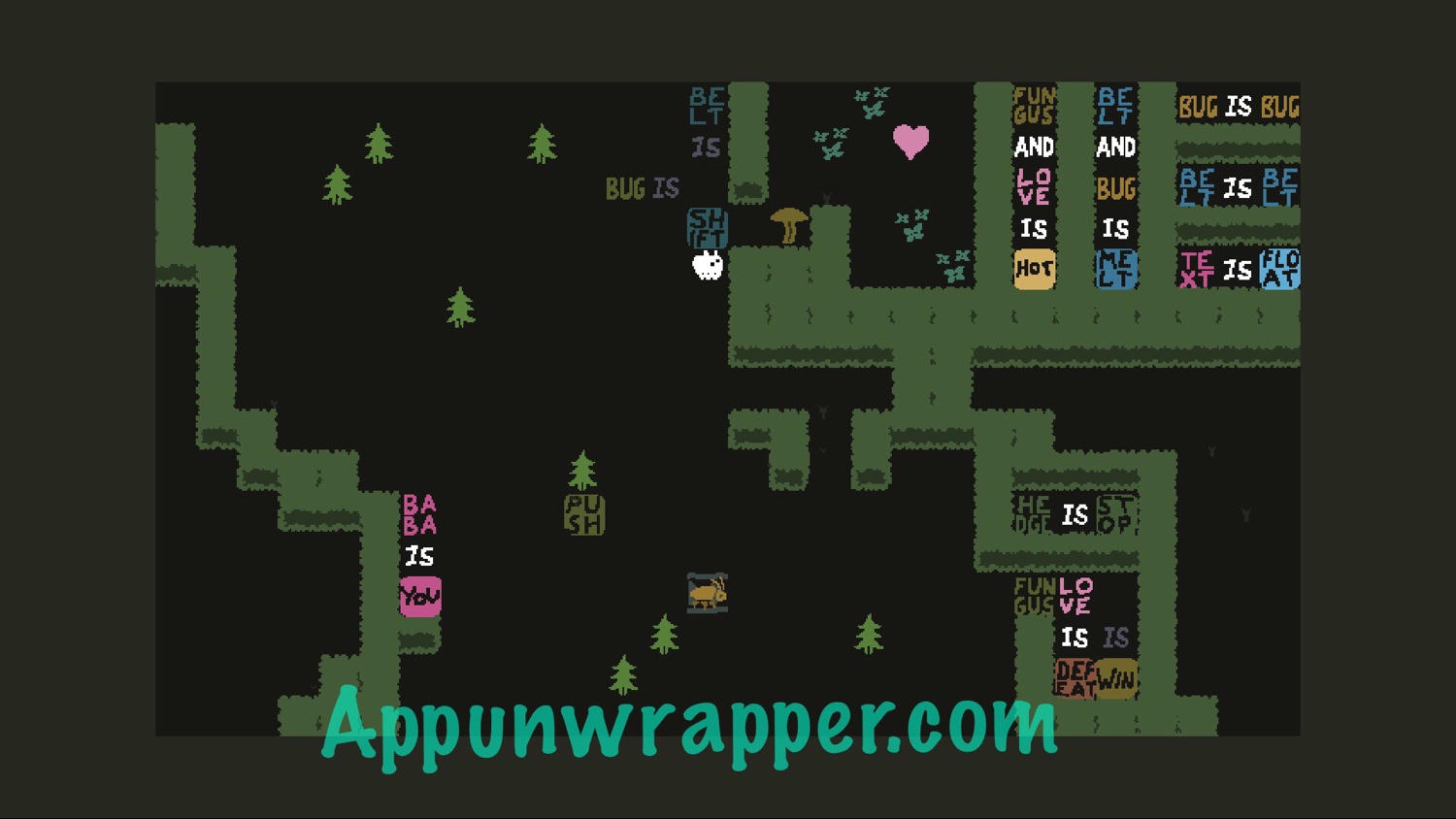 This is clever! Push WEAK onto one of the bugs and then add HAS AND to the left of it. Push right so that AND WEAK is past the bugs. Make BOX IS YOU. Now you’re all the boxes. First, use the bit of wall above the word WALL to smash the bottom right and bottom middle boxes. Then get under AND WEAK and push up just enough so there’s a space before AND. Get above AND WEAK and use the single box to push AND WEAK right. Now just maneuver everything around to get BUG IS DEFEAT AND WEAK. Make sure not to break your boxes in the process. HAS should have already destroyed one of the bugs, so push it back left with the top row of boxes, ensuring you’ll still have five boxes left. Now make KEY IS YOU again and then make BOX HAS KEY. As the key, smash all the boxes. You won’t really be able to see it, but each JOC you break will add a key to the pile. Now you can open all the doors and still have one key leftover to touch the flag and win!

Make FLAG IS PUSH and push the top flag up into the corner to the right of WIN. Make KEKE IS PUSH and FLAG IS TELE and then push Keke onto the top flag. He’ll be facing up now and teleport between the flags. Push SHIFT left to make KEKE IS SHIFT. Now he’ll push the bottom flag up. Push WIN all the way right onto the top flag. WIN will get teleported to the bottom flag. Push it off and then make FLAG IS WIN. Touch the flag to win!”

Just walk into any of the words in BABA IS SWAP to break up the rule. Now you can touch the flag and win!

Push FLAG left and down to make FLAG IS YOU. Then walk into any of the words in FLAG IS SWAP to break up the rule. Then push BABA back up to make BABA IS YOU again. Push FLAG right to make FLAG IS WIN again. Touch the flag to win.

First, make KEKE IS SKULL. Then make SKULL IS PUSH and push the skull right a bit. Make SKULL IS KEKE and then KEKE IS MOVE. Press spacebar to make Keke move past the grass. He’ll swap with one tile of it. Break up KEKE IS MOVE once he’s on the right side of the screen. Make KEKE IS SKULL again and then SKULL IS MOVE. Wait for the skull to come back to the left side and then then break up SKULL IS MOVE to stop him. Make SKULL IS KEKE again. Make KEKE IS MOVE again and press the spacebar to make him swap again with the same grass tile, moving it further left. Now you can go through the gap and touch the rock to win!

Make TEXT IS PULL AND and line it up with SWAP. Push it into SWAP and then pull the whole string of text inside with you. Now, make IS PULL AND SWAP in a line and push it right so IS lands on the skulls. Push TEXT down in front of it to make TEXT IS PULL AND SWAP. Now pull back left and the words will swap with the skull, effectively pushing it out. Keep going so you get a nice big opening to get through. Make FLAG IS WIN and touch the flag to win.

Still working on this!

Start the same way as with Moving Floor. But you don’t have that extra IS. So instead, push all of FLAG IS PUSH through the top belt, with FLAG landing on the bug. Then go down and push the IS down to the next belt. Now you can go through and push WIN down and make BABA IS WIN. Touch Baba to win!

Still working on this!