Lukasz Spierewka’s Golf Peaks released last year and I instantly fell in love. It’s a finely crafted puzzler and one of my favorite iOS games. I’m usually not much of a golf fan, but the clever way it used cards and removed any finicky controls you might expect from the genre resulted in a polished and satisfying game. So when I heard he was working on a new puzzle game about cats making sushi, I was completely on board. Inbento is very different from Golf Peaks, but what they have in common is a simple concept and focused vision that allows for tricky puzzles without overcomplicating things. In fact, I was skeptical at first that it could live up the the challenge of his first game, but the last few worlds have proven me wrong and possibly broke my brain.

In inbento, you take on the role of a cat mom packing bento boxes with all sorts of fish, rice and other ingredients. The story follows her and her kitten as they bond over the popular Japanese cuisine. Each level is at maximum a 3×3 grid. At the top of the screen is the pattern you need to copy. You simply drag pieces from the bottom to the box in the center. At first, you’re only packing ingredients next to each other or on top of each other, figuring out the best way to layer them. But things start to get more interesting when new mechanics are added. There are pieces that allow you to move tiles, swap tiles, copy tiles to another place on the grid, or even pick up tiles to save and then drop anywhere you want. Most pieces can also be rotated, making it even harder to decide exactly what to use them for. If you mess up, you can either reset the puzzle or simply tap on the bento box to undo your last move. The game even reminds you to do so if you run out of pieces and didn’t solve it. That, together with one-handed portrait mode and simple controls makes for a very mobile-friendly puzzler that’s great to play anywhere. 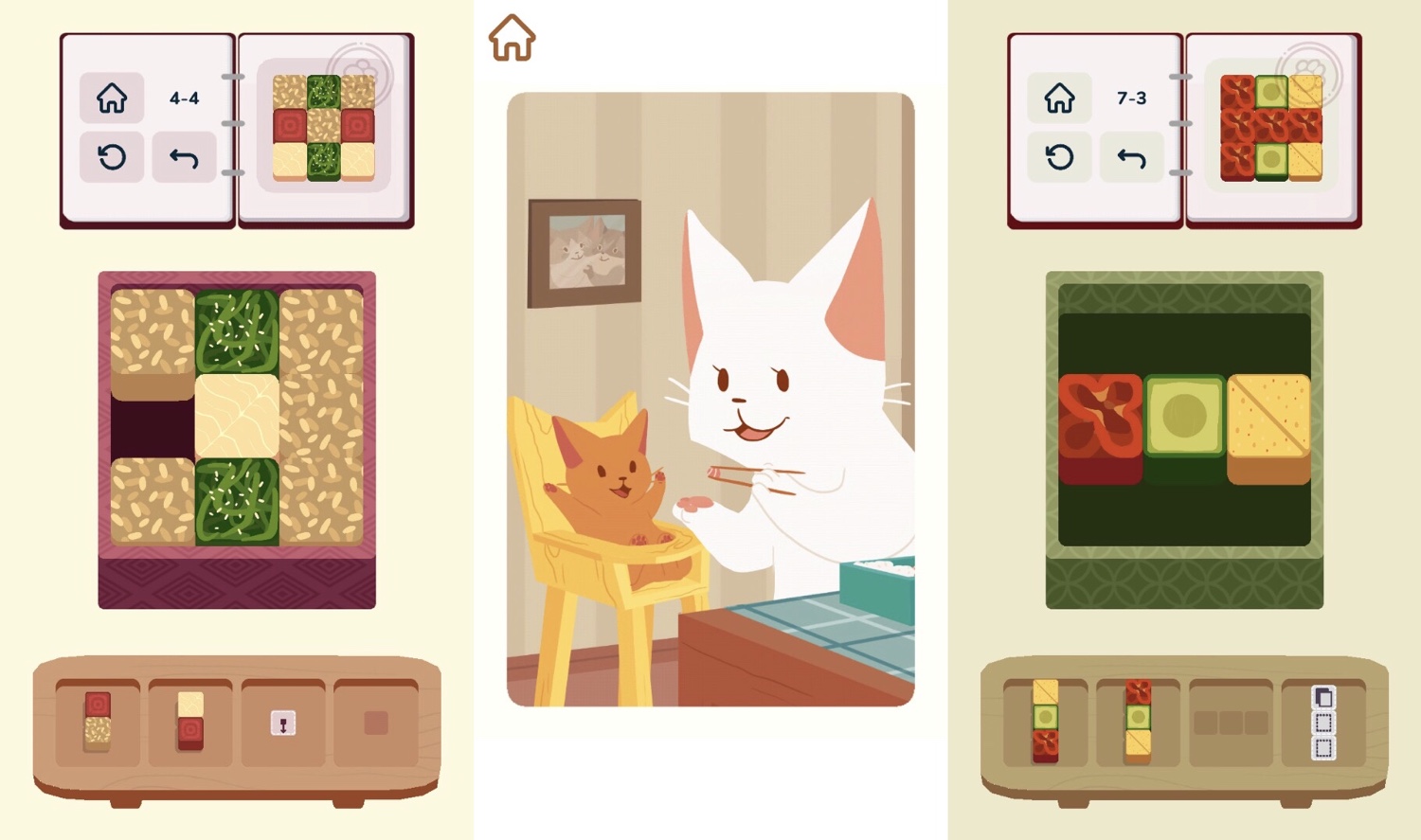 Inbento features over one hundred levels throughout twelve worlds. Like I said, the game starts off pretty easy, maybe even too easy. I breezed through the first four areas and was worried it might not show its teeth. There’s perhaps a bit too much filler for my tastes. But things get much trickier later, and I haven’t even been able to finish it yet. I’ve been working at a handful of puzzles that I can’t seem to crack. Thankfully, the game isn’t hyper-linear, allowing you to unlock three levels at a time in a world. So I currently have five levels to work on at once instead of being stuck on one until I can solve it. 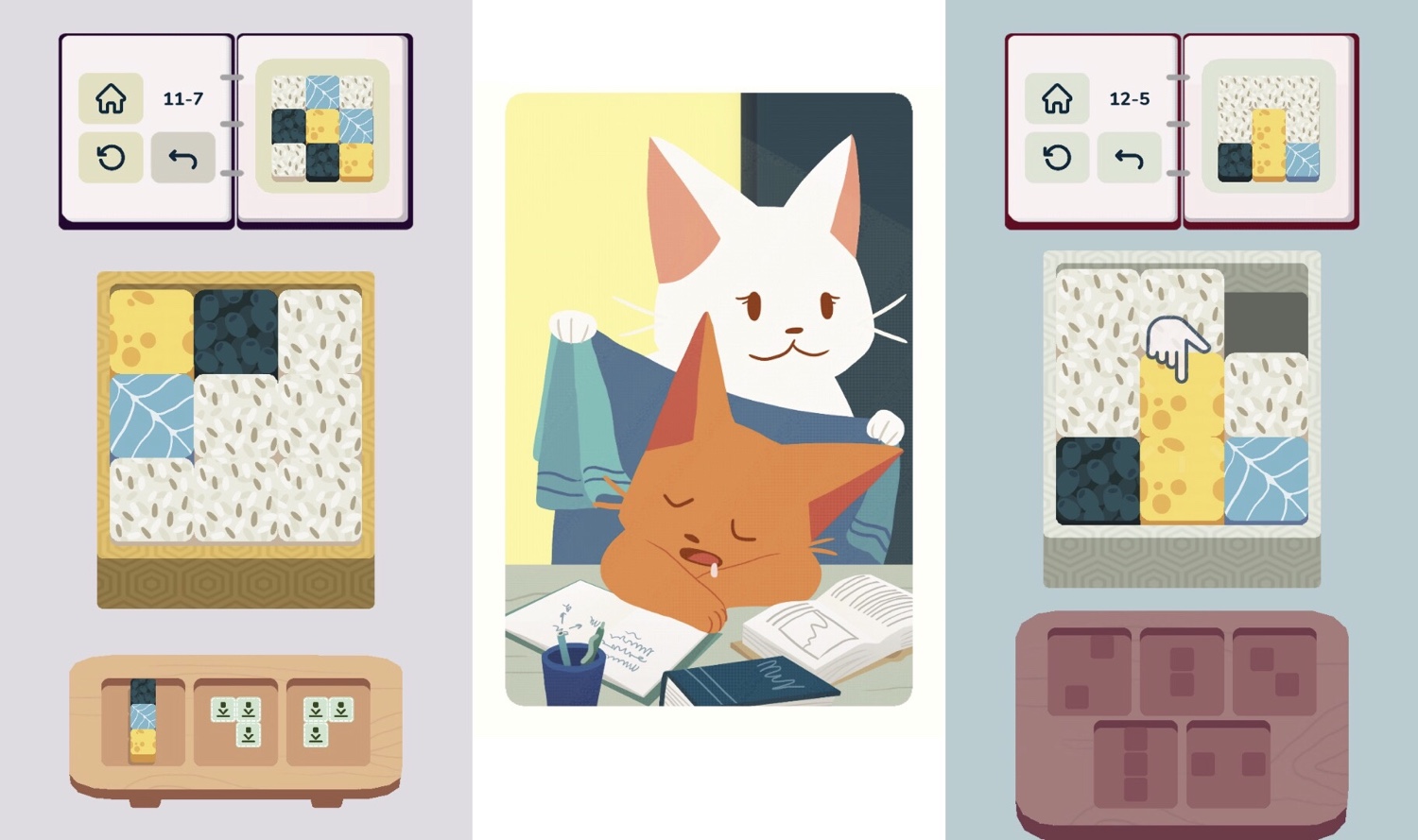 Later levels of inbento remind me of some of Golf Peaks‘ best puzzles, in the way they manage to be challenging even with as little as three moves available. Instead of overcomplicating things by adding twenty different pieces to work with, the game never has more than six. It’s a sign of a good puzzler when the mechanics are so focused that a small 3×3 grid with only three moves can be such a stumper. It’s because the possibilities seem endless with those three moves. It’s difficult deciding which ingredients to remove, and in what order to use the three pieces. And, like the best Golf Peaks puzzles, they often try to trick you by making the most obvious solution the wrong one. You really have to think outside the box with some of the later puzzles. Pun intended. 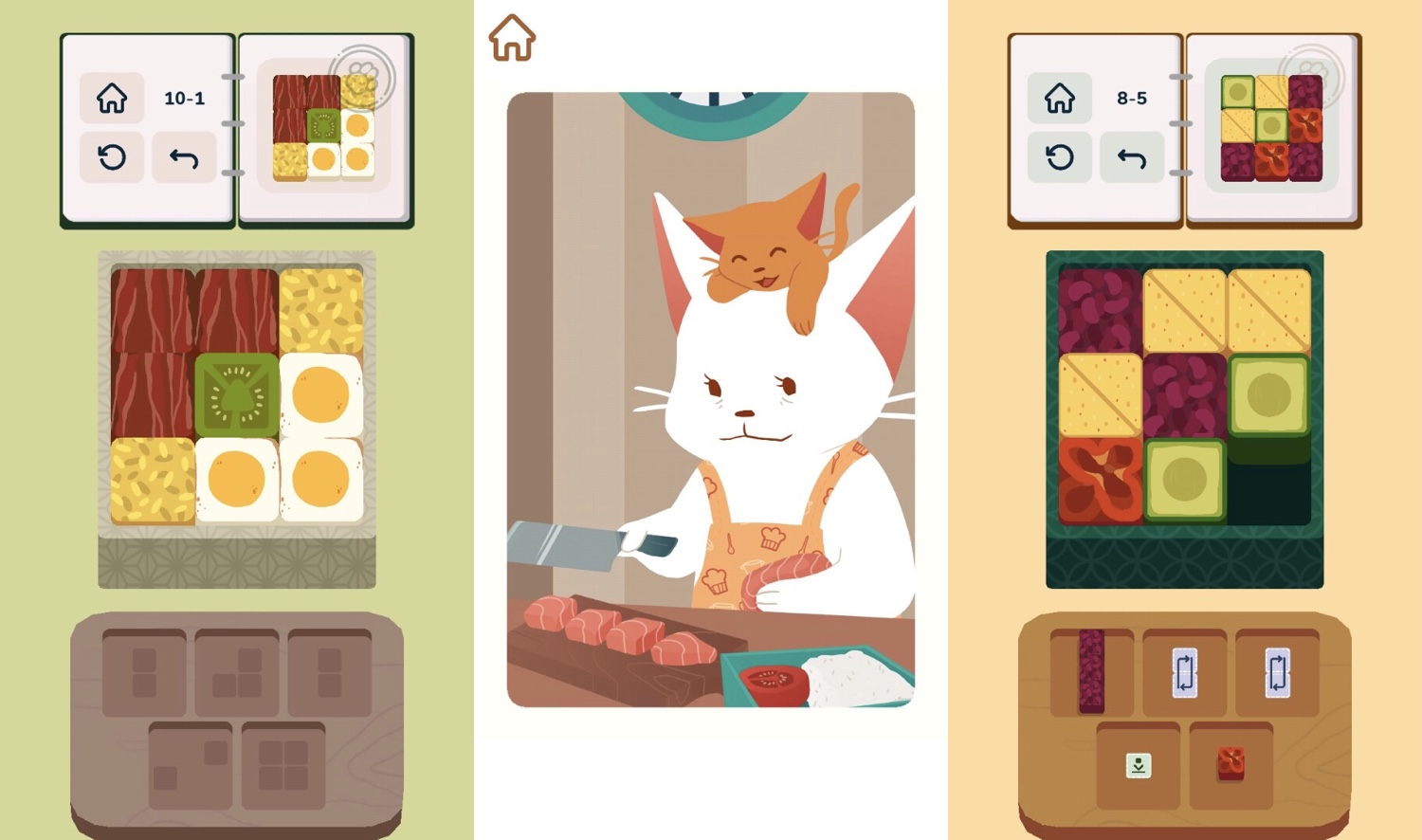 With inbento, Afterburn Games prove once again that they know how to craft highly focused and satisfying puzzlers. I wouldn’t have minded the difficulty ramping up a bit sooner, but there’s enough challenging content that I haven’t been able to rush through the entire game. Add to that a clean, sharp art style and a cute white cat that resembles my own, and it’s hard not to fall in love. I’m looking forward to spending more time with the last few levels I need to solve. And if Golf Peaks is anything to go by, we can expect some content updates down the line. If you’re a puzzle fan, you can’t go wrong here. So go grab inbento and start your career as a furry sushi chef. Just don’t let any cat hair get into the food!