The Chronos Principle
By: Logisk Studio

It’s hard for a puzzle game to stand out these days, especially on mobile where there’s so many new ones releasing every week. I’m personally drawn to those that make me work my brain but not so much my reflexes, and ones that have little filler. If I’m going to spend my time solving puzzles, I want them to be quality puzzles. Even with those criteria, there’s no shortage of games and I still have some I need to go back to and complete one day. So for a new one to grab my attention and hold it to the end, it has to be really good. The Chronos Principle, which I first mentioned a week or two back, is such a game and worth any puzzle fan’s time.

At first, it may seem this will just be a generic ice sliding puzzle, where you swipe in a direction and your character follows, stopping only when it hits a wall. There are so many games like this, some memorable and others easily forgettable. What makes The Chronos Principle stand out is that it uses a time manipulation mechanic, similar to the mimic from Linelight. Your goal is still to get to the exit in each level, but how you do so is quite clever. For each puzzle, you’ll have a certain number of “past lives” you can use to help you out. The way this works is that you forge a path using swipes, then press the button at the bottom of the screen. It will record all your movement up to that point and repeat it, using a sort of shadow of your character. Once it completes its journey, it becomes solid and stays in place. You can then use it as a stepping stone to access paths you wouldn’t have otherwise, or perhaps hold down switches for you. You’re basically creating multiples of yourself, but all the copies play out at once. 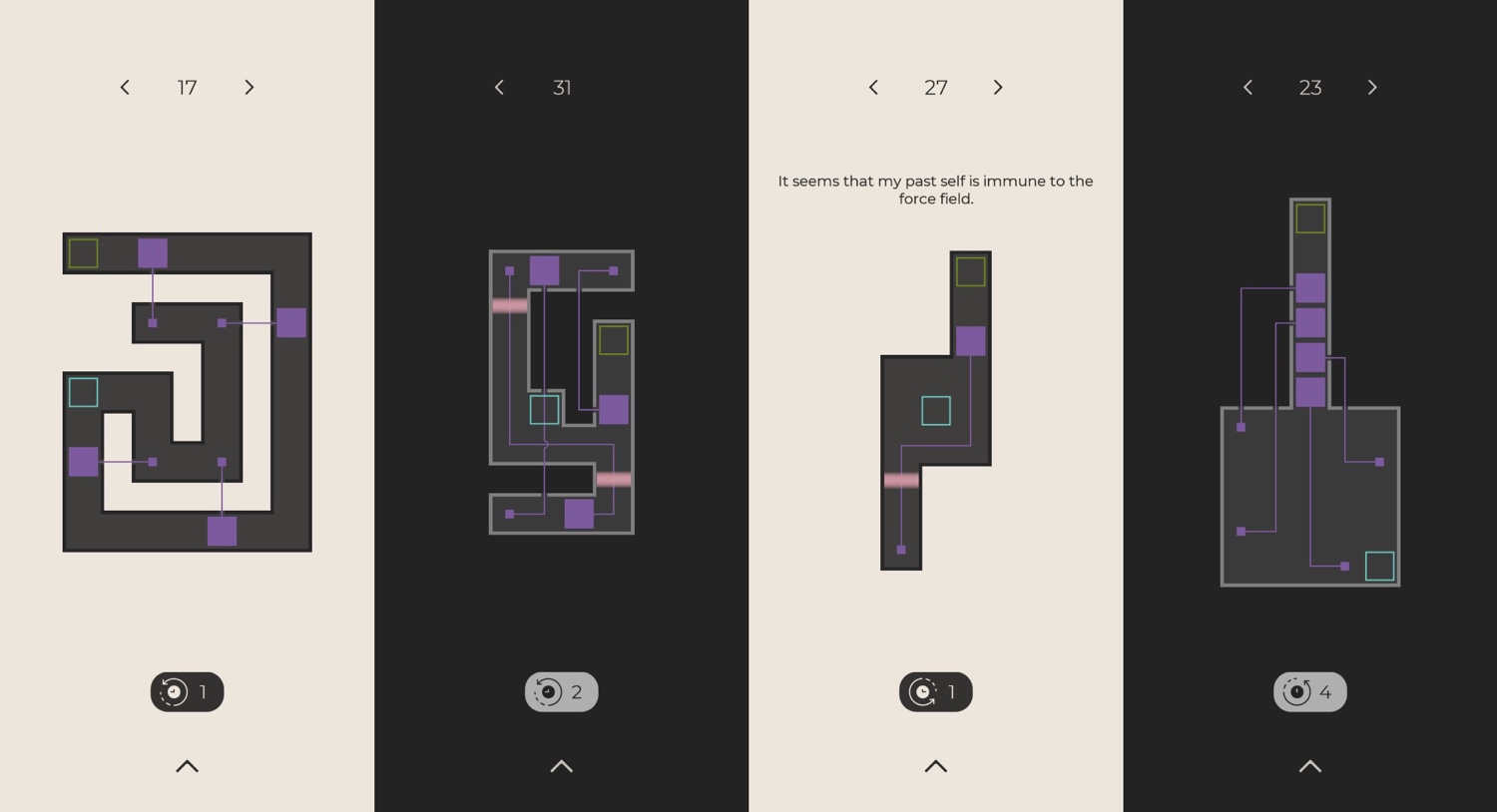 Early on, it’s pretty straightforward, as you use your past self to, say, fill in a hole so you can land above it instead of inside it. Or just land on a switch that turns a square on or off, either stopping you or allowing you to pass through it. In fact, at first I was wondering why the game recorded all my wait times, too, and not just the moves themselves. But as complexity is added, it becomes apparent. You sometimes have to wait while recording and give yourself time to work together with your past selves. There are also walls that only you or your past serves can pass through, depending on the color. In trickier levels, you have to move your character along the path you want your mimic to follow, even if you can’t actually go along that path yourself and are instead basically drawing it out in your head. It all sounds a little hectic, and at times it can be. But I never felt frustrated enough to quit. I almost did on the penultimate level, but I’m glad I worked through it because it was a very satisfying solution. 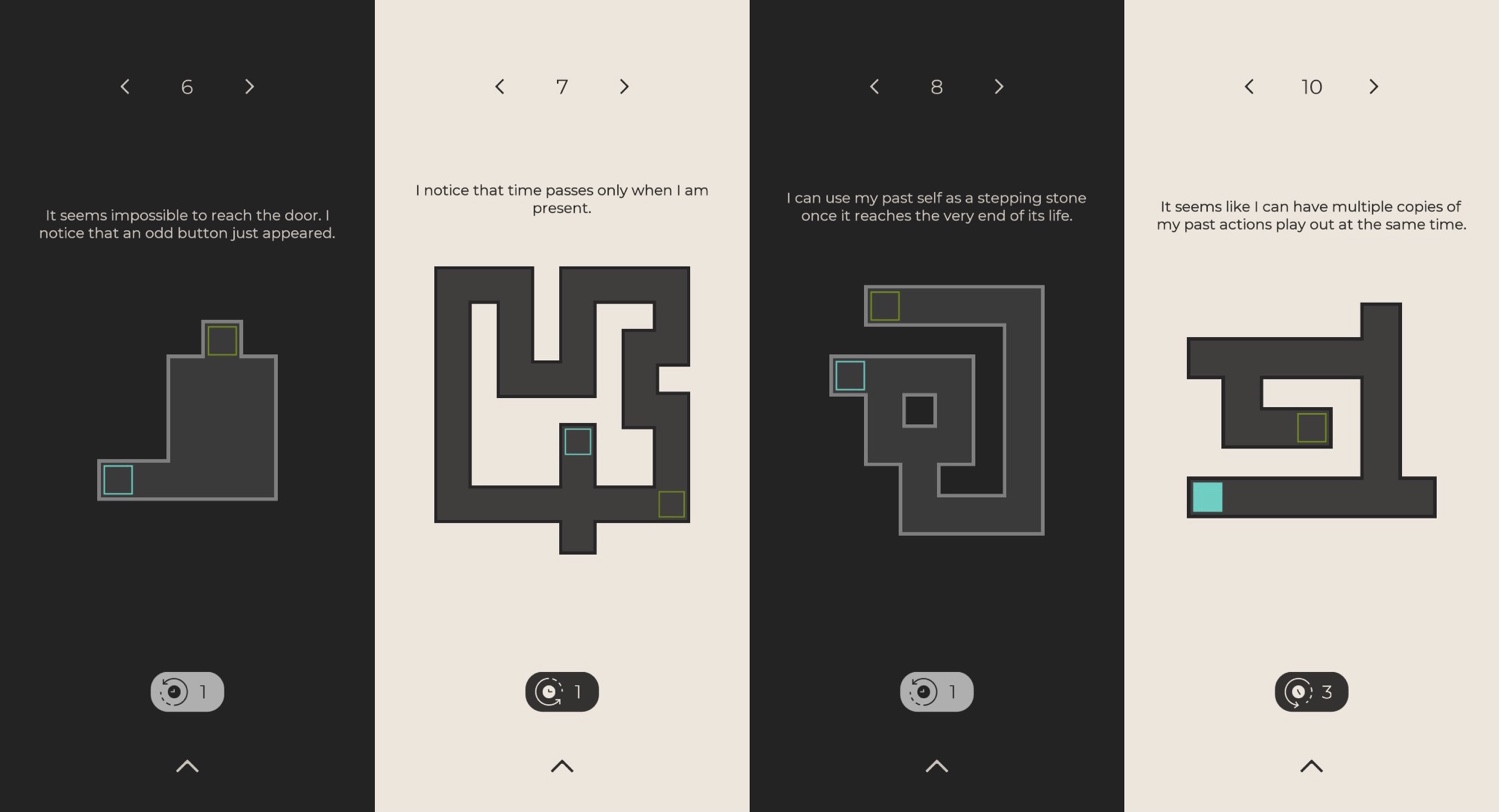 On top of the brilliant puzzle design, the game features touch-friendly swipe controls that work well on either an iPad or iPhone. It plays in portrait mode so you can play anywhere, though the more challenging levels do demand attention. While it is easy to mess up, restarts are quick, so failure isn’t much of an issue. I also like the minimalist art style and clean layout that makes all the pieces easy to read. There’s even light and dark modes for whatever mood you’re in, as well as iCloud sync so you can swap between devices without losing progress.

One other aspect I was really impressed with was the narrative, which also acts as a very hands-off tutorial. It nudges you a bit towards the solution without actually spelling it out. It’s also far more elegant and less distracting to read the words “I try to move by swiping the screen” instead of, say, an animated hand directing you to swipe. The text offered just a little bit of information about new mechanics, letting me work out the rest on my own. I really liked how this was done, as it was far more engaging than having no text at all, without being overbearing. It brought the whole game together and made every level feel important, as part of an overarching story. There is no filler here because each puzzle either teaches a new mechanic or pushes the boundaries, and they all work seamlessly together. 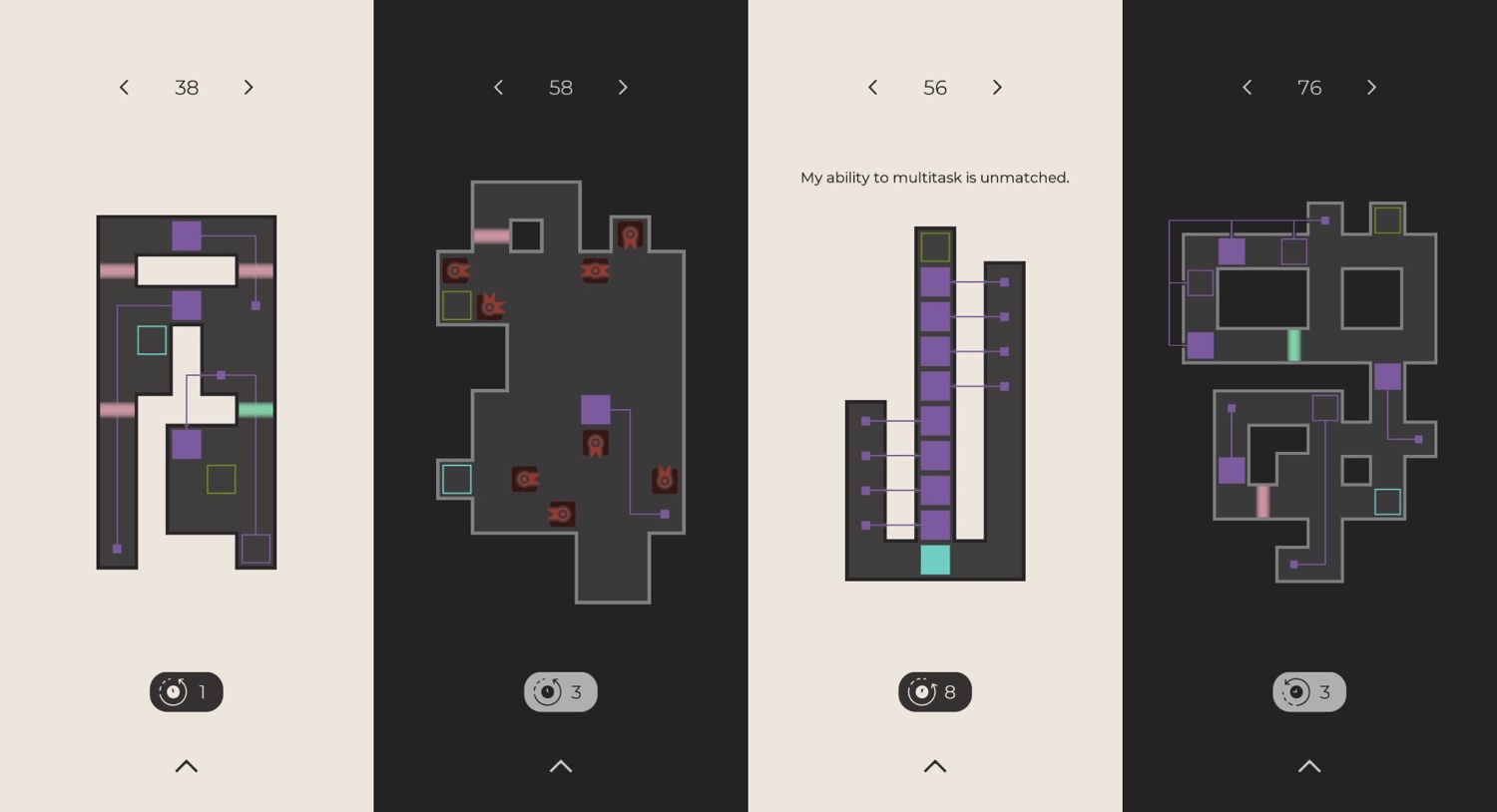 The Chronos Principle is one of the easiest games to recommend, as it takes an innovative mechanic and explores so many possibilities with it. You’re constantly learning, constantly rethinking what you know. Developer Logisk Studio pushed the time manipulation mechanic just to the point where it could have become overly frustrating, but knew where to wrap it all up. The game should only take a few hours to complete, but it is absolutely time worth spent. If you’re a puzzle fan, don’t skip out on this gem. Grab The Chronos Principle here and figure out how to coordinate with your past selves.