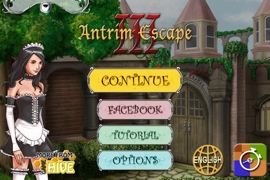 While there are plenty of room escape games in the Apple App Store, quality is hard to find. The Antrim Escape series from Game Hive Corp. is one of the (if not the) best out there. If you liked the first two games in the series, Antrim Escape 3 will not disappoint.

Gameplay/Controls: 5/5
AE3 is your basic room escape game. You tap on items to investigate them or pick them up. You collect an inventory of items that will aid you in your escape if used properly. AE3 boasts an impressive 50 puzzles in the finale (or is it?) of the popular series. There’s even a challenging mini game thrown into the mix that you’ll either love or hate.

AE3 returns with Team Tactics, last seen in AE2. This is a great feature that has you passing items between characters in order to progress. The controls are intuitive, responsive and easy to learn. The loading times between actions are practically nonexistent. There’s no spinning circle of doom to slow down your adventure. You can click around as much as your heart desires without having to worry about lag. Even switching between characters is as simple as tapping on their icons. 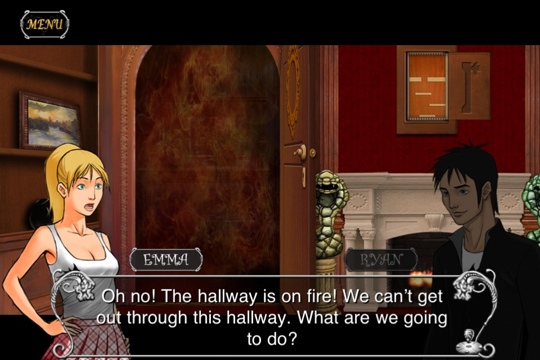 What I did miss were the tilt/shake controls that were present in the first two games. I was a bit disappointed that they didn’t incorporate these platform features into the game. I’m not sure why this was done, but I hope they return in the next part of the story. However, they did make up for this by hiding clues and items in clever new ways (hint: look at things from every possible angle!).

Story 4/5
The story continues from the previous games, introducing a new playable character, Ethel, into the mix. We join her as she learns that Adam (her lover?) is trying to burn down Antrim Castle, with her inside it. While she’s trying to escape, she meets up with our heroes from the first two games, Ryan and Emma, and they work together to escape the castle. Throw some time travel and hidden passageways into the mix and you’ve got a pretty interesting story. But don’t worry, there aren’t pages and pages of dialogue to read through. This is a puzzle game first, and puzzles are what you get.

Graphics 5/5
The gorgeous 2D graphics are optimized for retina support and look great. You can tell a lot of work went into drawing these. This was not a rushed game and the attention to detail shows in every corner of the rooms. The backgrounds are crisp, clean and there is no confusion over what you’re looking at. Each screen can also be zoomed in for further detail and easier scavenger hunting.

Audio 4/5
The soundtrack for AE3 doesn’t stand out. It’s designed to blend into the background, and that actually works well for it. It’s simple but unobtrusive, so there’s no need to shut it off. The sound effects are spot on, and are sometimes needed in order to solve a puzzle. The visuals and audio come together to create a realistic experience you could get lost in.

Replay Value 2/5
While the first play through will likely take you several hours to complete, there is no reason to go back for more other than to beat your score. But this is a room escape game and they usually end when you, well, escape. The first two games had alternate endings added, so perhaps we will see one for this game as well. If you are looking for a brain-busting experience that will entertain you for a few hours and leave you craving for more, then this game is for you.

Antrim Escape 3 is full of challenging puzzles that will keep you entertained for hours, maybe even days. While it doesn’t take advantage of tilt and shake controls like the first game, there are enough high-quality and challenging puzzles to make this a must-play game. Don’t rush through it and look for hints online. Try to get through it on your own for the most rewarding experience. When it’s over you’ll just be wishing for more.