Full motion video (FMV) games and interactive television really do seem to be getting popular, what with Netflix’s Bandersnatch bringing it mainstream. Just last week, I reviewed The Shapeshifting Detective, the latest murder mystery to get ported over to iOS. Now we have one geared at kids, and it’s about a sentient avocado that you can control. I’m a fully grown adult without any children and I had a great time with Avo!, thanks in part to Ryan North’s and Gemma Arrowsmith’s clever writing and Katy Reece’s convincing acting. As with every great children’s book or movie, the game is silly enough to appeal to kids, but smart enough to entertain adults.

For some unexplained reason (do we really need one?), a young scientist named Billie invented a gadget called the Bring Fruit to Life Machine (BFTL). She only managed to make it work once, but it brought us Avo, a living avocado that can walk — but not talk — and is now Billie’s assistant and closest friend. You control Avo by drawing a path for him to follow, making it very touchscreen-friendly. There are beans for him to collect, which are used to unlock new episodes. But usually he runs around the lab searching for different objects for Billie’s experiments.

When we first meet the daring duo, the electric company is about to cut their power, so Billie has to get working on that wireless generator she had planned. Your job is to guide Avo around to look for a few items she needs. While it’s interesting exploring the lab in miniature form, the real fun happens when certain actions trigger video clips, and Billie shows up with either a punny science joke you’d expect from your dad or a useful piece of information. The playable area and video clips blend so seamlessly that it really does feel like you’re playing inside a movie. 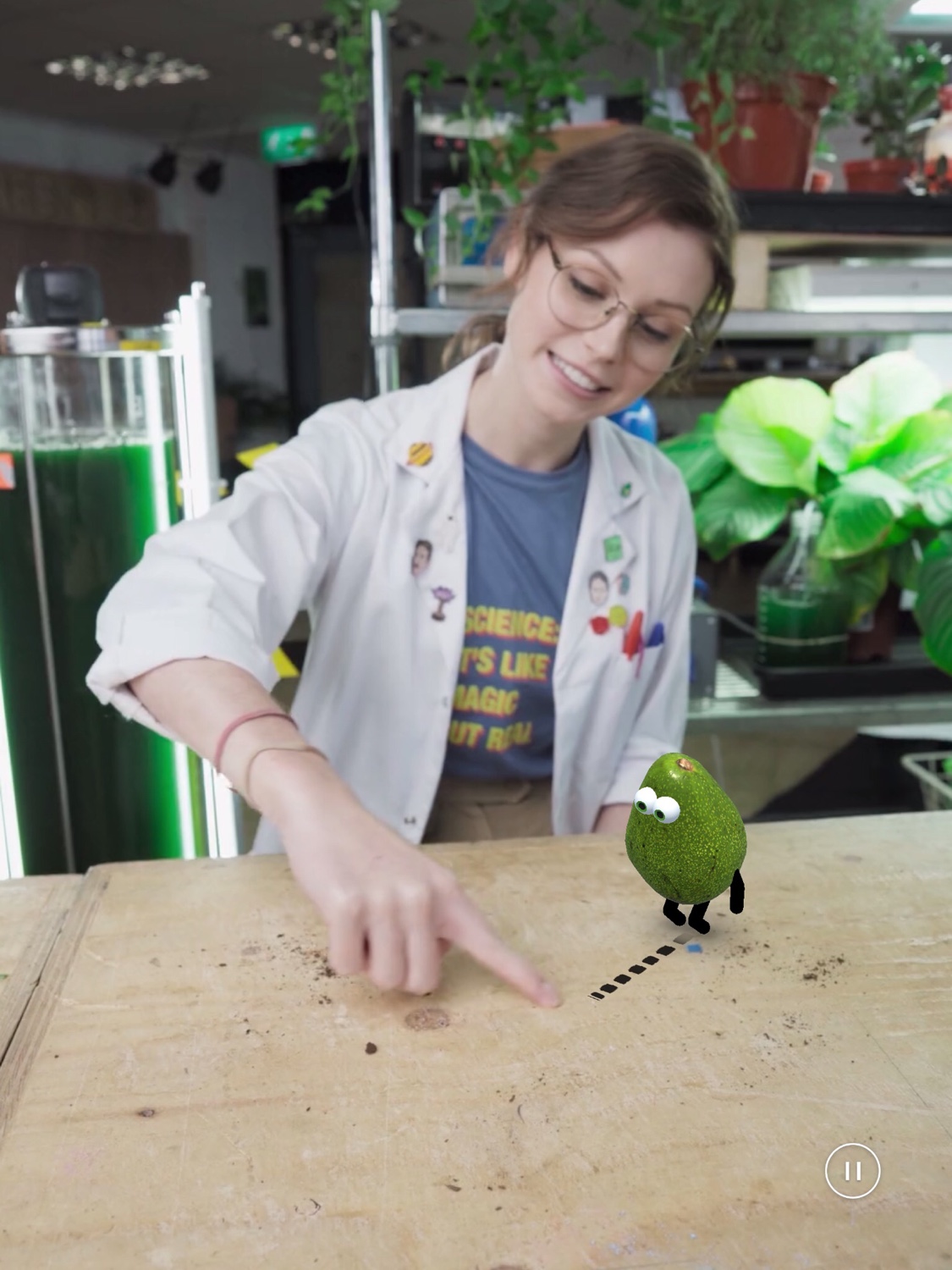 Billie has an infectious thirst for knowledge and she’s eager to share with both you and Avo. For instance, did you know that magenta is not a real color? Between the script — co-penned by comedy writers Ryan North of To Be or Not to Be fame and Gemma Arrowsmith — and Katy Reece’s exceptional acting as Billie, I probably would have enjoyed the game just fine if it all took place inside the lab. But that wouldn’t make for a very exciting story, so of course things are shaken up a bit when someone finds out about the BFTL and tries to use it for nefarious means. It’s then up to Billie and Avo to stop their villainous schemes. The lab is full of great inventions like a teleporter and shrink ray, and you can be sure that their adventures will require use of all of them. 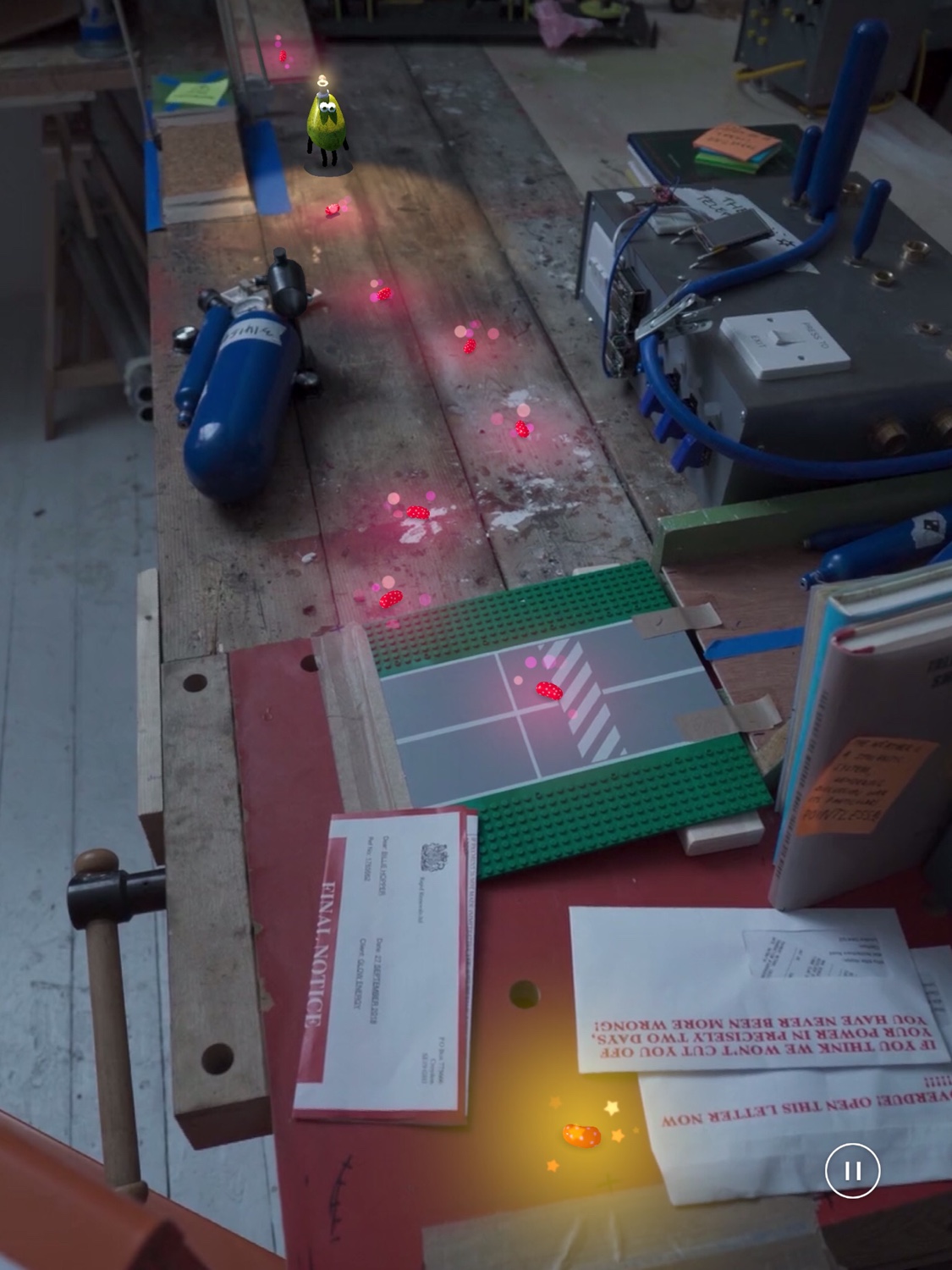 Avo himself can’t speak, so aside from an episode where he’s left on his own to cause trouble, the entire game rides on Billie’s script and Reece’s acting. While Nick Malinowski does a great job in his supporting role and I loved listening to his monologue, I can’t stress enough how Reece’s acting sells the game. I was a hundred percent sold on the fact that she was talking to a sentient avocado and can’t imagine any big-name actors doing a better job. It’s also refreshing to see a female protagonist who dresses kind of dorky and captures our attention with her personality, not her sex appeal. The result is a performance that can appeal to players of all ages. Even though this is a kids’ game and meant to be educational at times, I never felt like I was being talked down to. 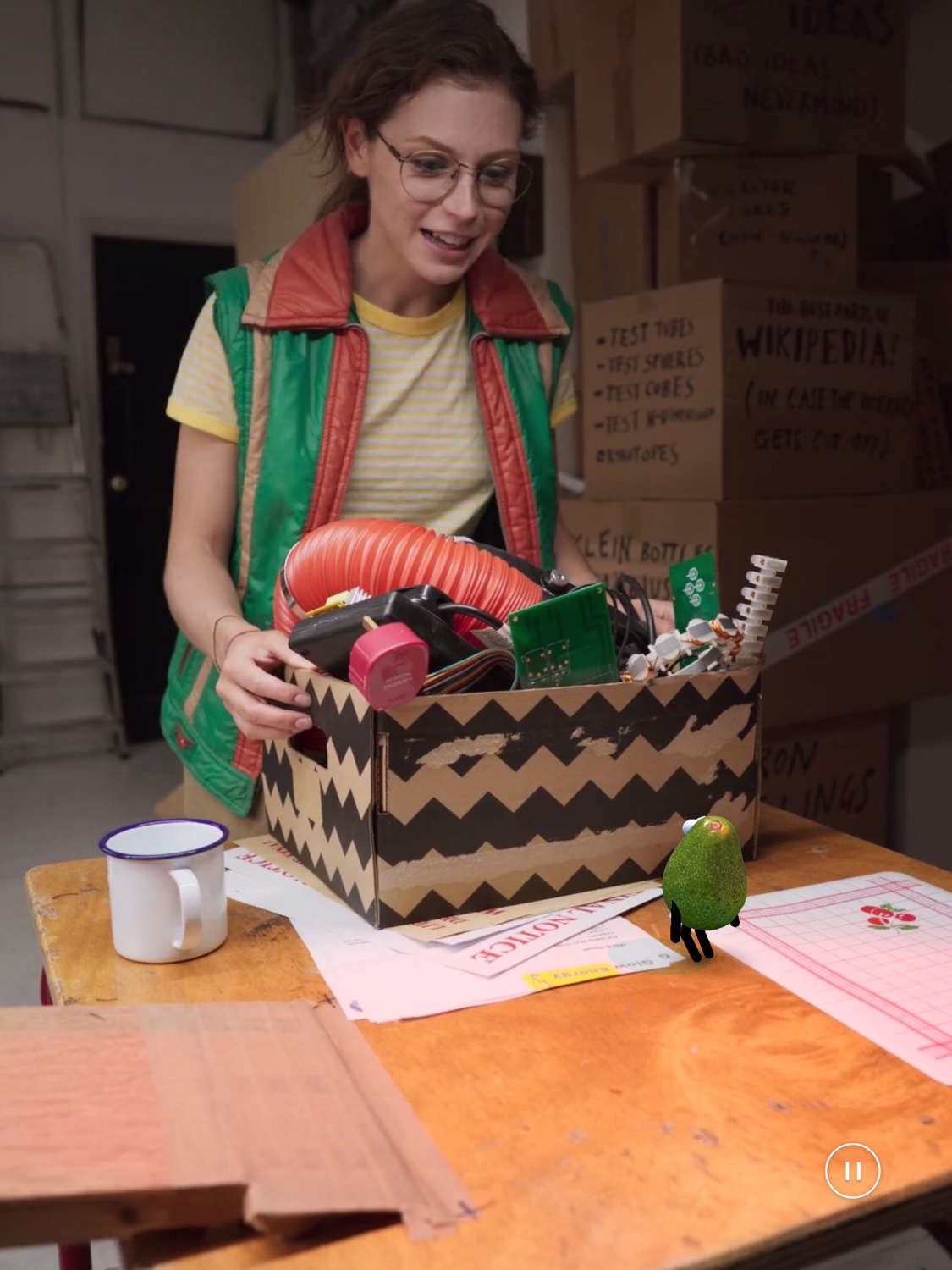 As an interactive movie, Avo shines. I really wouldn’t change anything about it, except maybe add more of everything. It’s the perfect amount of silliness you would want from a game about a live fruit. ItΓò¼├┤Γö£├ºΓö£├╗s also a very wholesome game, so I hate saying anything bad about it. But I did have a few issues. As an app, it’s a little lacking. I mentioned earlier that the beans you collect are used to unlock new episodes. They also give a small speed boost, but other than that they have no use. I’m also not a big fan of using consumables to unlock content in this way. The first three of eight episodes are free, which is more than generous. But it costs a thousand beans to unlock each of the other episodes. It makes much more sense to buy the beans than to replay episodes and slowly amass them. If you do that, though, it feels pretty pointless to keep collecting beans. Either way you cut it, the beans never really serve much of a purpose. The price is fair and I applaud their willingness to give folks a way to play completely free. But I still would have preferred a one-time price to just unlock all the episodes and have the beans stay an in-game currency, perhaps used for the upcoming costume shop. It rubs me the wrong way seeing consumables like this in a game aimed at children, as it normalizes spending money on in-game currency.

On top of that, the game has overly aggressive iCloud syncing. I usually appreciate when a game utilizes iCloud, but I wanted to restart the game from scratch and couldn’t find any way to do so on my iPhone, no matter how many times I deleted it and shut off iCloud sync. I did manage to do so on my iPad, but now the game resets my progress every time I open it. I would have really liked a way to reset my progress when I want, not just when the game glitches. I imagine parents might also want to be able to give each kid a fresh game and not one with all the bonuses already found. 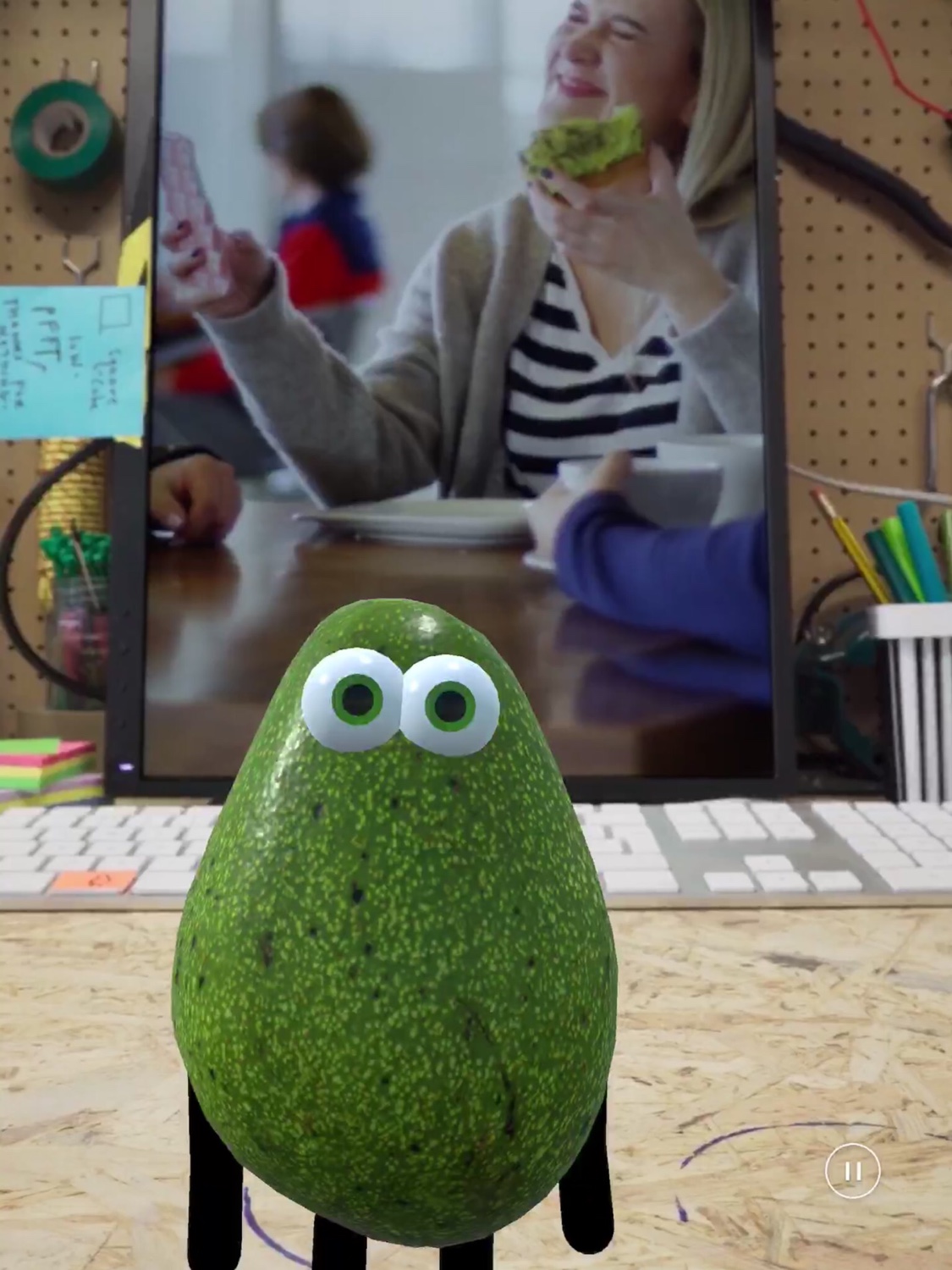 Not everything is perfect gameplay-wise, either. There are bonuses to collect in each episode that usually unlock more video clips. I really liked this aspect of the game, but at times wish it was utilized better. Most bonuses are found simply by walking around and looking for stars that pop up near items. But some can be easily missed if you pick up items in the wrong order. Others can only be acquired if you replay an episode. Some of these extras were a fun and satisfying to find, but I wish more of them had been. I found an early one only because someone saw that the episode’s ending in my gameplay video was different from hers, and she picked things up in a different order. But I would never have thought to try that on my own, as the game doesn’t really hint at it. Other times, you don’t know you missed a bonus until it’s too late to go looking for it. This wouldn’t be a big deal if you could skip video clips on subsequent plays. But since there’s no way to do that, it makes finding those missing bonuses less fun than it should be. There’s also a lot of wasted potential for puzzles here. The bonus scenes are certainly worth seeing, but I wish there was more rhyme and reason to how they work so I could feel like a super sleuth when I uncover them instead of just stumbling across them by accident. 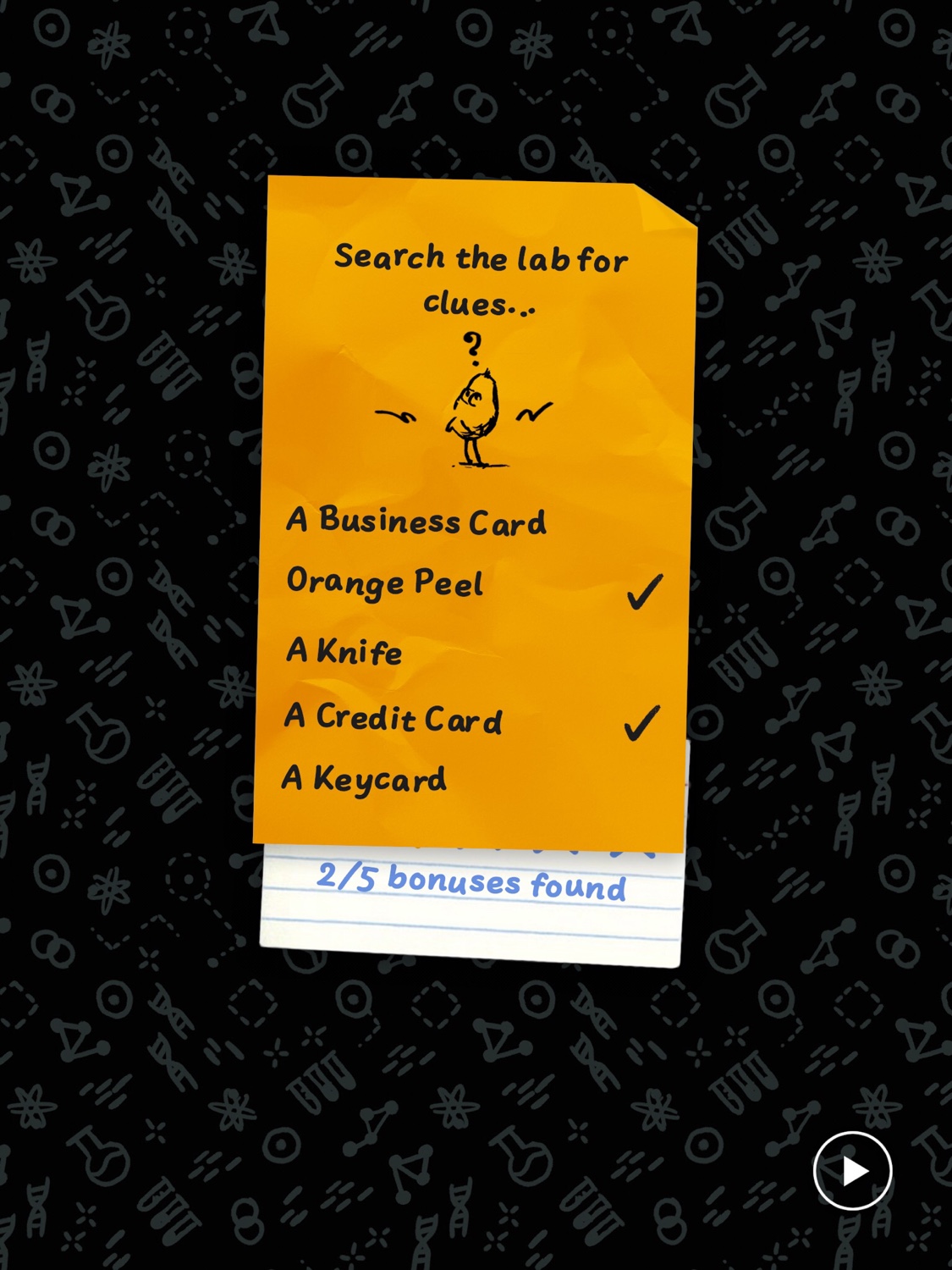 It’s a shame that these wrinkles sneaked into an otherwise terrific game. It’s clear a lot of love went into making it, especially if you pay attention to all the messages scrawled throughout the lab on boxes, sticky notes and whiteboards. Even the threatening letters from the power company are entertaining if you stop and read them. There are all sorts of Easter eggs to find, starting with the message on Billie’s shirt — “Science: It’s like magic but real.” If you look carefully, you can even see a whiteboard full of names Billie was considering before she settled on “Avo.” Everyone who worked on this game clearly had a lot of fun doing so, and it shows in every detail. 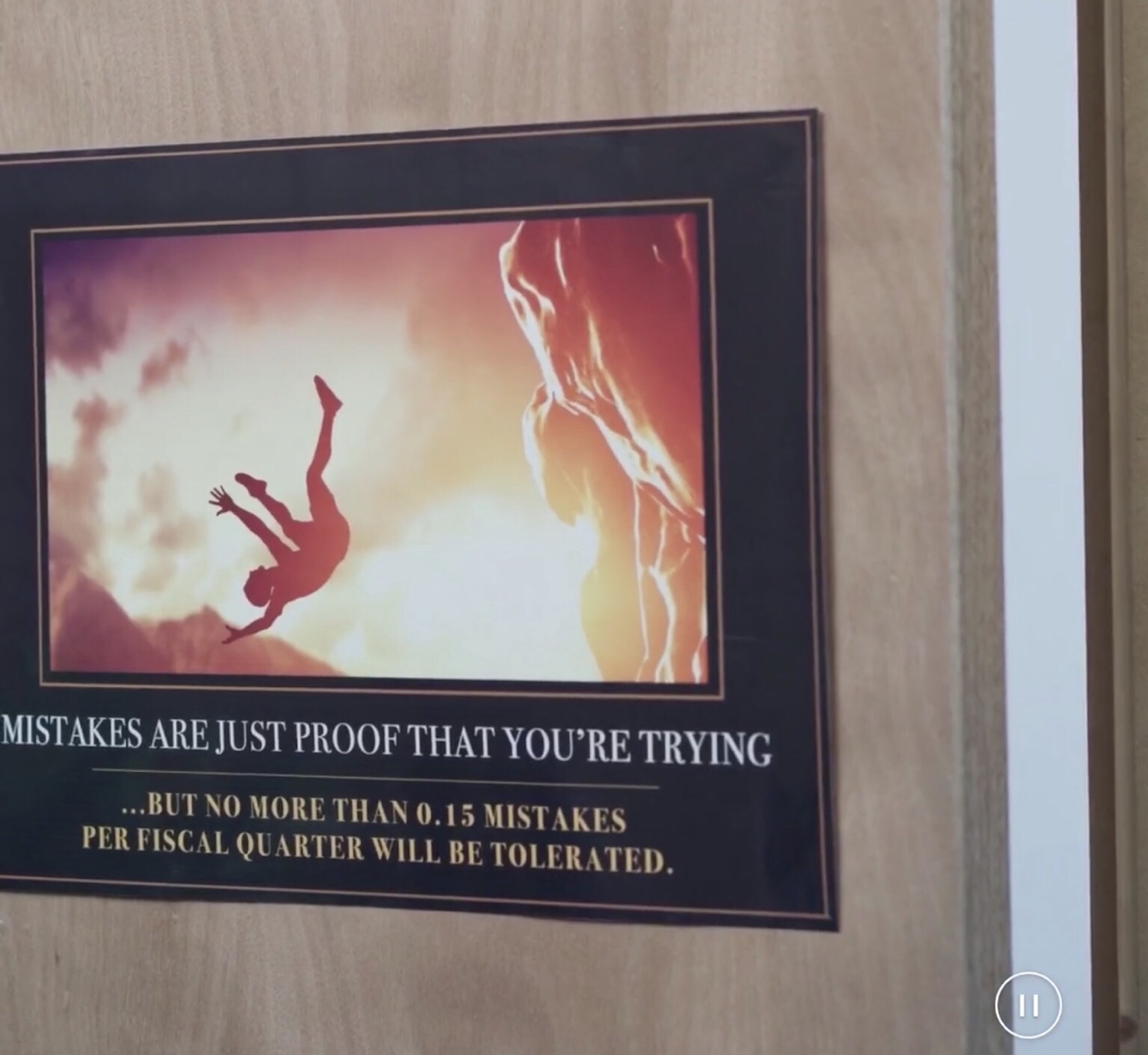 There’s even an augmented reality (AR) function that’s accessible from the start, whether you spend any money or not. With it, you can bring Avo into your own world and make him dance. You can even have him play with your pets. I don’t usually like AR games, as many of them have me awkwardly walking around my living room to play a game that would make much more sense resting on my lap. But Avo builds it into the story in a very clever way that really works. So when the game asks for permission to use your camera, give it! 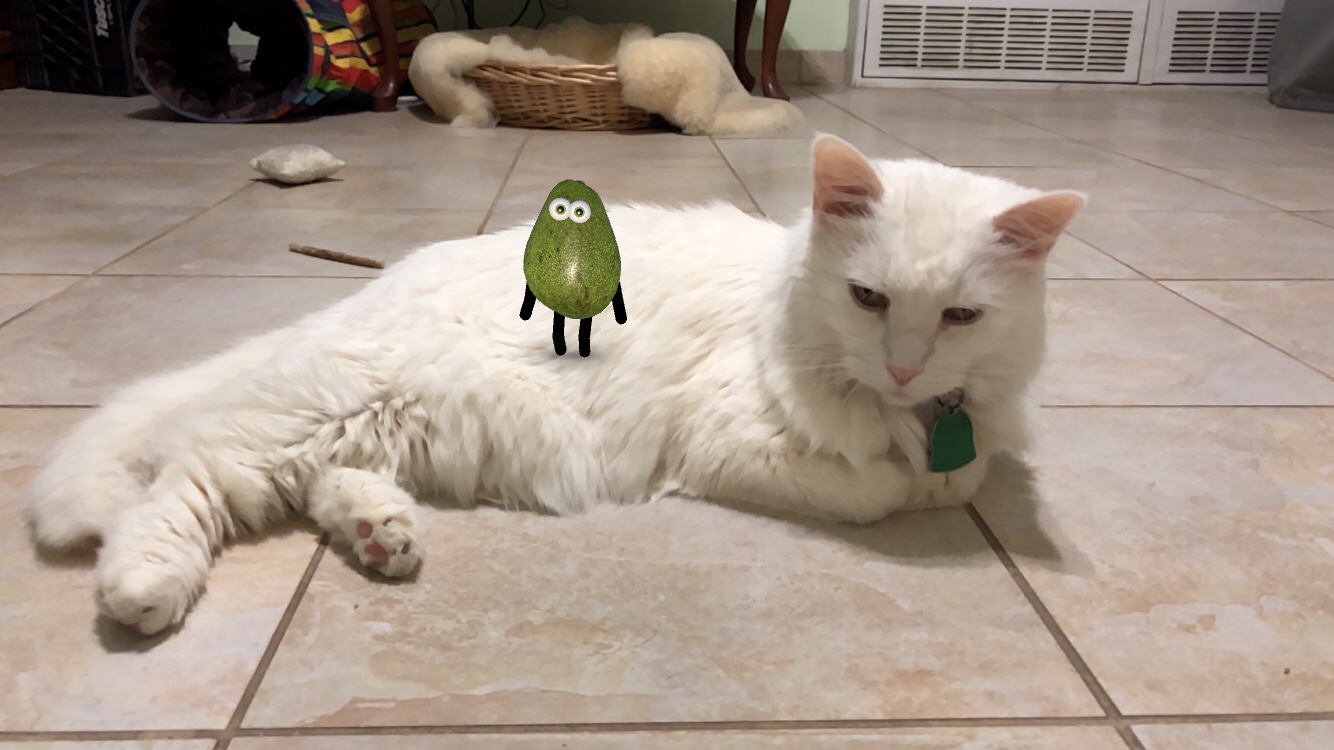 Despite some minor complaints, I thoroughly enjoyed my time spent with Billie and Avo and would highly recommend it to anyone looking for quirky games that try to do something unique. I still need to go back and search for some bonuses I missed, and am looking forward to any new content that will unlock. Although the game is light on actual gameplay, Billie and Avo’s antics are perfect for interactive video and I would happily join them — and any of their friends — on future adventures. This is no Annoying Orange, but rather a sentient fruit you can feel good about giving to your children. And if you have no kids, don’t be ashamed to play it yourself. Clever writing and strong acting make it a worthwhile experience for all ages. It’s all I avo could have wanted from a playful FMV game. So guac over to the App Store and download Avo for some of the best interactive television around.

I also have a walkthrough guide here if you need help finding some of the bonuses.

In Fear I Trust: Review